1942 the British General staff attended to the question: “How should a heavy “assault tank”, able without harm to themselves to act at the head of the offensive orders troops?” At that time, the military command has developed a new concept of development of armored forces, and I must say that attempts to give an exhaustive answer quickly laid down on paper in draft form. There are several development machines, for example, АТ33 “Exelsior”, АТ38 “Valiant”, but in most cases, more drawings have been done.

Among them was a project of AT1 company “Nuffield, mecanizacion limited” from Birmingham, who offered just two options of the machine. One of them — with 200 mm armor, and only two machine guns. Another, with armor 150 mm it was planned to equip a 75-mm cannon or 95-mm howitzer. The approximate weight of the machine was to be 45 tons. But the military was not satisfied with the offered service. In General staff felt that such tank it is necessary to set the mortar, and even a flamethrower on one of the fenders. However, to implement their wishes in the metal, the designers somehow did not.
The new project of the company was born in may 1943 and was a machine with body, armor protection, which was closed on top of the tracks, and armament consisted of two coaxial machine guns in turrets on the roof and two guns, one caliber 20-mm twin machine gun was mounted in the left part of the front plate, the other a six-pound, with automatic loading “Mainz”, also with a machine gun in the right. The project, of course, too, several times reworked, and then on June 26 came the following, under the index АТ10. It these guns are reversed, on the roof, put the coaxial machine-gun. The maximum thickness of the armor identified in 225 mm and having a total vehicle weight 45 t
Considering the production of such weapons for the dogma, the designers started making wooden life-size model. However, the General staff reiterated its demand to arm the “Turtle” (Tortois) — it is the name given to a new tank, 75-mm cannon with high muzzle velocity.
One of the leaders of the “Nuffield”, Thomas miles — head of armored vehicles, has found that such modernization, as well as the necessary elongation of the body, will increase the machine weight up to 65 tons as 75-mm guns it is suggested to put on this tank the latest by the time the 17-pound (76.2-mm) gun, which the British began to set on the American “Sherman”. 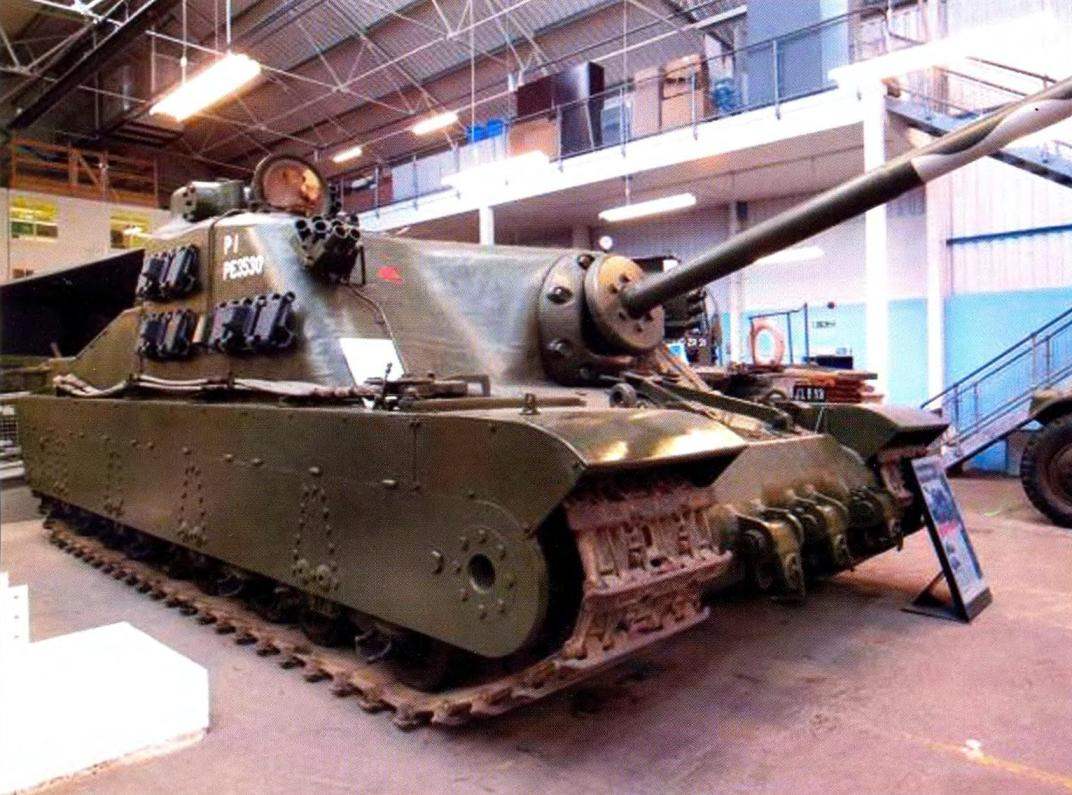 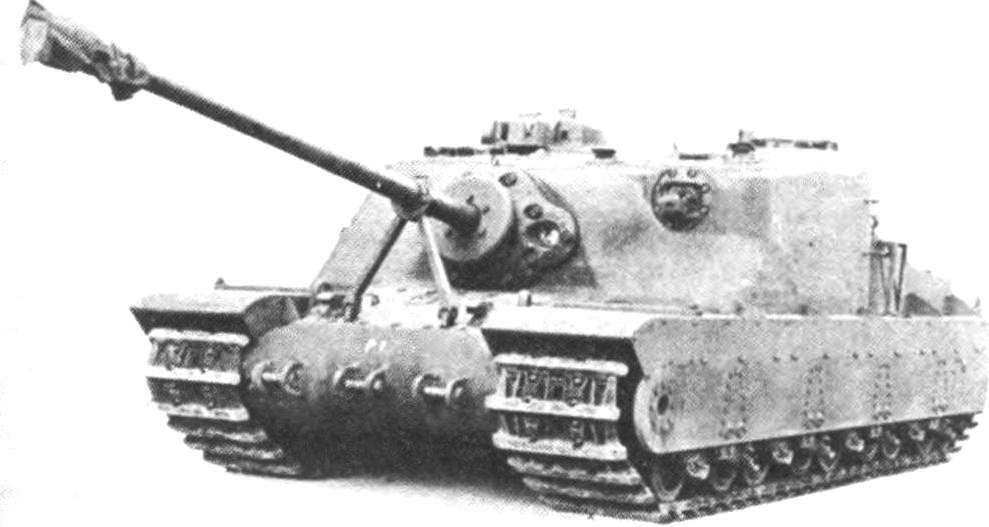 Heavy tank A39 (Tortois)
A sample of the tank of the next project АТ13 filed August 13, 1943. It was an already sufficiently developed machine, and in addition to 76.2 mm on it remained and 20-mm gun. The suspension had four two-wheeled carts on each side, while they are came at each other, hiding behind.
The outer wheels of the carts could be removed in exactly the same way as wheels on a German tank “Tiger”, so “Turtle” could be English bridges without difficulty. Caterpillar had a width of about 810 mm.
The engine “rolls-Royce meteor” were placed in the stern, transmission front, transmission put the “Merritt-brown”.
The designers intended to make the body “Tortoise” monolithic. Although it would be advantageous from the point of view of body armor, to make such a cast part was very difficult purely technologically.
At the stage of wooden mock the new tank was altered as many as three times. In the new project AT14 first, it removed the second 20-mm cannon, leaving one gun and the car “feel better” up to 60 tons. Next АТ15 — the only remaining gun was placed in the middle of the body, which because of this was again lengthened, which brought the weight up to 66 tons. Once — АТ16 — war again demanded the rearmament of the “Turtle”. Only now, they needed a weapon on the basis of a 37-inch (94-mm) anti-aircraft guns, which represented the most powerful antitank gun of the British army. This gun case is again altered.
Finally got all the blueprints and started making the prototype. But the staff, without even waiting for his test in February 1944 gave a firm order for 25 cars under the designation A39. All the rush had a compelling reason: we had to equip the army with tanks of break before she would have been before strengthened through the “Siegfried line” in Germany, because another real strength for the assault was not!
However, the first estimations showed that even very rapidly to build tanks will be possible only by September 1945, although it was the most that neither is a favorable forecast.
Interestingly, in parallel with work on the “Turtle” has already been adopted for implementation, the designers have developed two more project of this machine — АТ17 and АТ18, only slightly differing in detail, but had a pneumatic gun instead of a flamethrower. On АТ17 they were even two, the second was in the machine gun turret on the roof. However, both projects just on paper and left.
Meanwhile, the fighting in Europe ended, and the English General staff has reduced its first order up to twelve cars, and then to six. It was made only five tanks, parts of the sixth, it was decided to put on spare parts for all others. The cost of each A39 was 141 666 pounds — very impressive for that time amount.
Case “Turtle” — welded from sheets of rolled armor. The main casting the bulky top part without a roof. She “rolled” separately and welded to the casting. The thickness of the armor reached 230 mm. the lower part of the body had side screens.
12-cylinder engine “rolls-Royce” of MK.V “meteor” power of 650 HP was in the aft, although the sprocket was in front, idlers rear. Transmission — the “Merritt-brown” Н51D had six speeds forward and the same back, grip — “Bord-Bekk”.
Suspension — torsion bar type suspension with four wheel bogies with two pairs of rollers on Board, each rink had its own independent suspension. Width of Shoe tracks with centering ridges amounted to 810 mm. On each side had six carrier rollers. 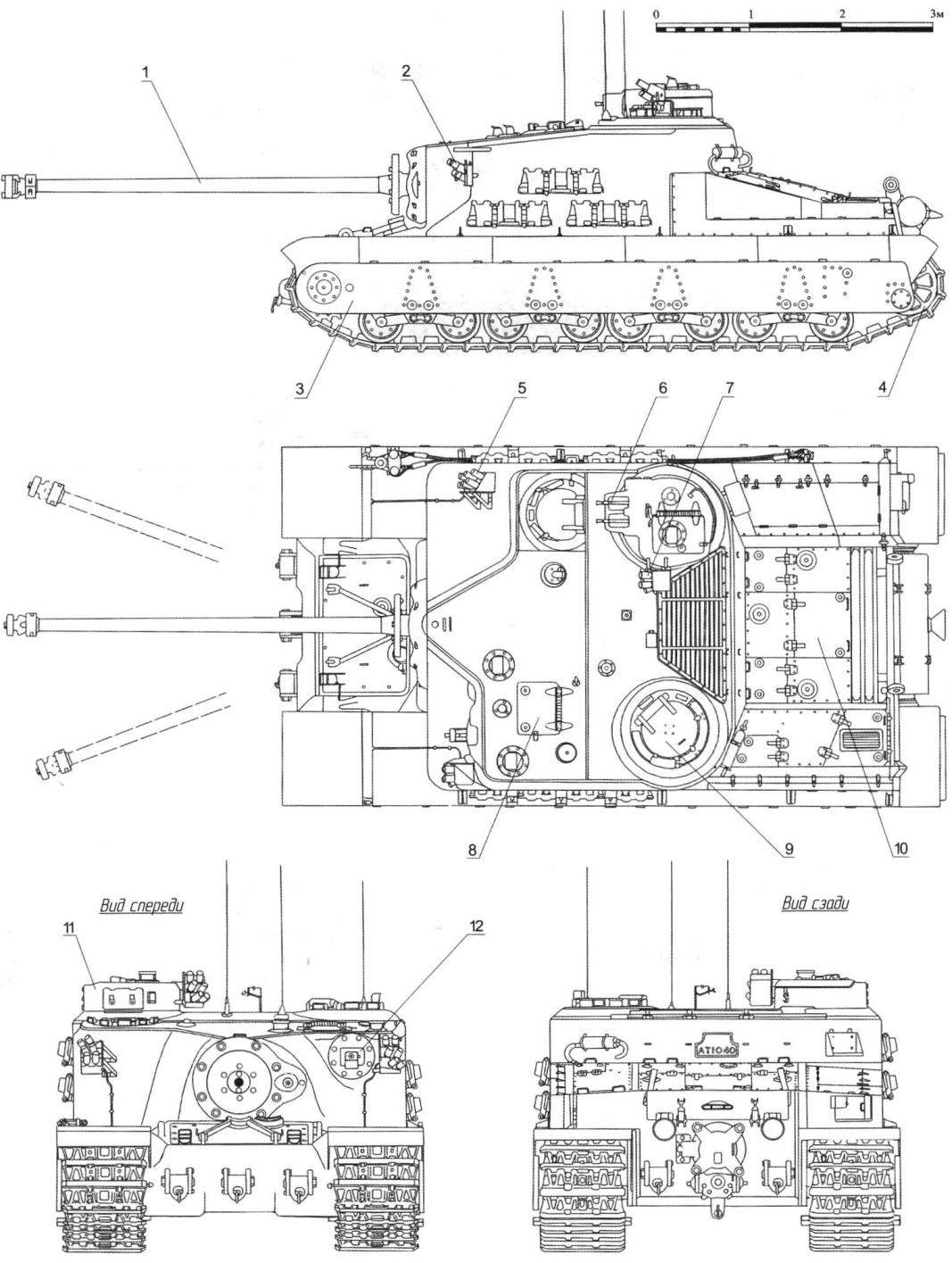 English heavy tank A39 (Tortois):
1 — 94-mm gun; 2 — inch grenade launcher; 3—side screen; 4—sloth; 5 — six-barreled smoke grenade launchers; 6—tower coaxial 7.62-mm machine guns of the WEB; 7—smoke grenade; 8 — hatch gunner; 9 — hatch commander’s; 10—access hatches to engine; 11 —turret hand-loader; 12 — Cabinet 7.62-mm machine gun
Tank A39 was armed with a 94-mm cannon with a muzzle velocity of 880 m/s (according to others — 929 m/s); the firing angles along the horizon to 40° and a declination refers of +18° to -10°. Projectiles — armor-piercing and high-explosive. In addition, the tank had three machine guns: one in the frontal and the other two are paired in the upper turret on the roof. On the left the front hatch of the driver was a two-inch rocket launcher; three six-barreled smoke grenade launchers were placed on the commander’s cupola, and front on the case.
The number of crew members increased to seven. Besides the usual tank commander, driver, loader and gunner, were in the car: another loader, gunner frontal machine gun and the top turret gunner.
The connection is carried out with the help of the radio station n 19/38.
Make after the war the tanks A39 military did not intend, however, to write off to scrap such cars was pathetic. Therefore, we decided to try it out, and not somewhere, namely in Europe, where they had to act in the case of the continuation war. Therefore, in April 1948, two tanks were sent to Germany primarily in order to check the possibility of their transportation by land and sea. It was already clear that where will be “Turtle”, will be held and any other promising heavy tank, that’s why these tests had a very important practical significance.
Since a width of 3.9 m car could not be transported by rail, it was decided to organize the transportation on the highway on a special multi-axis conveyor that can withstand the colossal weight of the car. For towing (Transporter with tank had a total weight of about 120 t) it was decided to use two truck “diamond”, connected in one large tandem length of 28.5 meters.
Of course, a convoy of vehicles who take on German tanks, was immediately faced with the diverse and sometimes unique difficulties. So, the streets of many cities were covered with cobblestones and heavily damaged after the passage of any armoured vehicle, let alone a heavy, and even more so. Many of the bridges, which had to drive the conveyor with a “Turtle”, were destroyed, while others, although restored, but not calculated on its weight. Therefore, the trial group, consisting of 55 soldiers and 6 officers, and also repairers and suppliers, worked out literally all the details. In addition, the accompanied everywhere, provided a escort of the military police in jeeps and motorcycles. 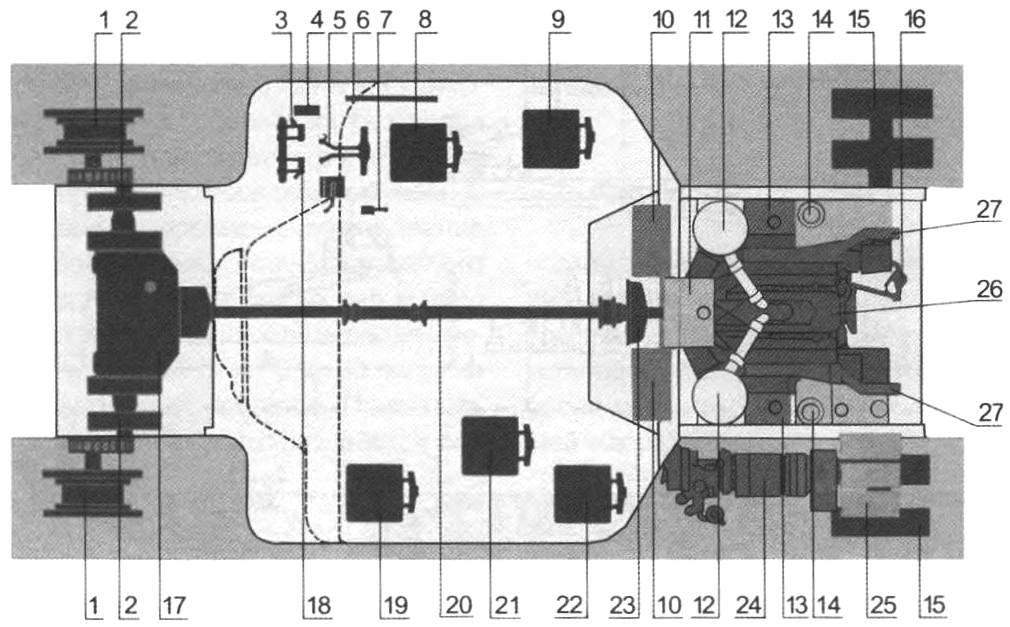 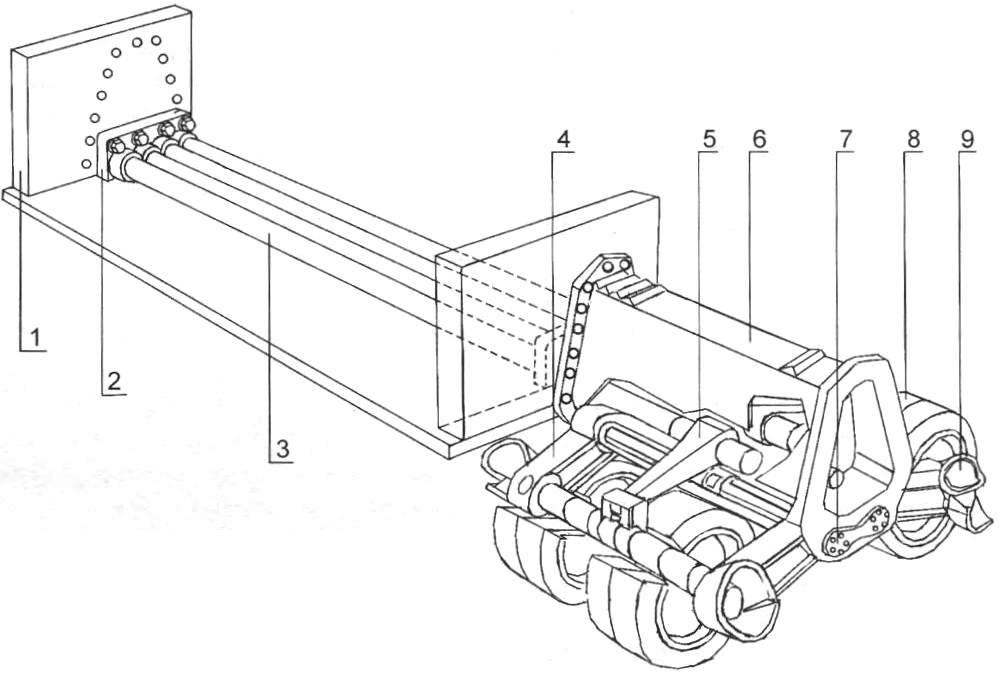 suspension Design tank A39:
1 —side armor; 2 — mount torsion; 3—goriona; 4 — arm; 5 — the lever of the balance weight; 6 — wheel truck beam; 7—joint arm; 8—skating rink; 9—rubber damper
Formal testing began on 1 June 1948 and lasted until October, when according to their results, the British Rhine army had prepared a special report. It was reported that the convoy passed 1040 km, of which their own tanks moved only 160. The maximum speed was 19 km/h, but in reality was much less due to the delays with the an oncoming traffic which had to stop. Bridges both tanks overcame its course and then loaded on conveyors.
At the site near Bolsena “turtle” conducted the test firing. The fire was at a distance of 2000 m at first at shields, and then charged at the American tank “Sherman” and the German “Panther”. From a distance of 1230 m. the shell the Turtle has broken a front plate of “Panther” and tore off a piece from the mask tool, which found and then in 5 metres from goal. Fire on the “Sherman” was equally effective. Military experts recognized the results of firing is very high. Was noted good accuracy of the battle of the new 94-mm guns and easy maintenance. Tankers, for example, acknowledged that, if they had this gun in 1944, they would have the advantage in weaponry over any German tank, including the “Royal tiger” and self-propelled gun “Wespe”. At the same time in the report, there are many other phrases: “too slow”, “too heavy”, “no circular firing”, “difficulty of transportation”, which eventually decided the fate of the tanks A39 finally.
If the British managed to make this tank at least in 1944, even with the shortcomings, they would be able to extremely powerful machine capable of hitting all types of German heavy tanks. However, history does not know subjunctive mood, so, late on the battlefield, “Turtle” in the end and was unclaimed.