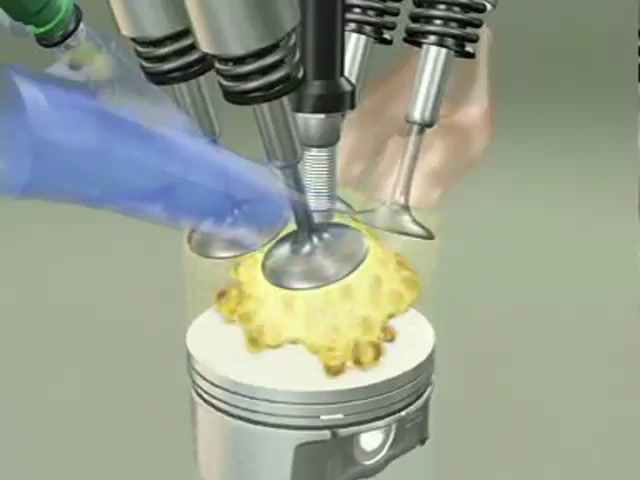 Four-stroke engine is called due to the fact that his work can be divided into four equal time parts. The piston four times will pass through the cylinder to two times up and two times down. The stroke starts when the piston is in the extreme top or bottom point. Motorists-mechanics this is called top dead centre (TDC) and bottom dead center (BDC).

The first stroke is the intake stroke
First the beat, he’s inlet begins with a TDC (top dead center). Moving down, the piston draws into the cylinder the air / fuel mixture. This stroke occurs when the open inlet valve. By the way, there are a lot of engines with multiple intake valves. Their number, size, time spent in the open state can significantly affect engine power. There are engines which, depending on pressing the gas pedal, is forced to increase time intake valves open. This is done to increase the quantity of intake fuel, which after ignition increases engine power. Car, in this case, it will be much faster to accelerate.

Second stroke – compression stroke
The next cycle of operation of the engine – the compression stroke. After the piston has reached the bottom point, it begins to rise upwards, thereby compressing the mixture that got into the cylinder in the intake stroke. Fuel mixture is compressed to the volume of the combustion chamber. What kind of camera? The free space between the upper part of the piston and the upper part of the cylinder when the piston is at TDC is called as combustion chamber. Valves, this operation stroke engine are fully closed. The denser they are closed, the compression occurs better. Of great importance, in this case, the condition of the piston, cylinder, piston rings. If you have large clearances, good compression does not work, and accordingly, the capacity of the engine will be much lower. Compression – compression can be checked with a special device. The magnitude of the compression can be concluded about the degree of engine wear.

The third stage – stroke
The third stage – work starts with TDC. It’s called work for a reason. It is in this stage the action takes place, forcing the car to move. At this stage comes into operation the ignition system. Why is this system called? Yes, because it is responsible for ignition of the fuel mixture compressed in the cylinder, in the combustion chamber. It’s very simple – spark system produces a spark. In fairness, it should be noted that a spark is thrown on the spark plug a few degrees before the piston top point. These degrees, in a modern engine is governed automatically “brains” of the car.

Once the fuel lights up, a blast – it dramatically increases in volume, causing the piston to move downward. Valves in the cycle of operation of the engine, as in the previous, are in the closed state.

Fourth stroke – exhaust stroke
The fourth cycle of operation of the engine, the last prom. Reaching the bottom point, after the working stroke, the motor starts to open the exhaust valve. Such valves, as the intake can be several. Moving up, the piston through the valve removes exhaust gases from the cylinder – ventilate him. From the precise work of the valve depends on the degree of compression in the cylinders, full exhaust, and a required quantity of the intake fuel-air mixture.

After the fourth beat of the turn first. The process is repeated cyclically. And due to that there is the rotation – operation of the internal combustion engine, all 4 stroke, which causes the piston to rise and fall in cycles of compression, exhaust and intake? The fact that not all energy produced in the operating cycle is directed to the movement of the car. Part of the energy goes to the flywheel. And he, under the action of inertia, turns the crankshaft of the engine, moving the piston during the “after hours” bars.