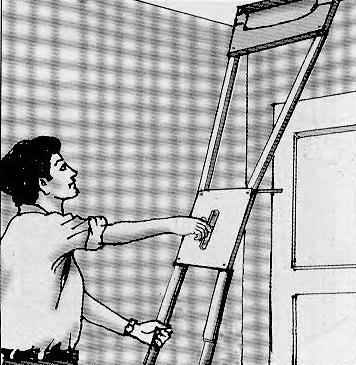 Of course, easier to repair in the apartment with an assistant. However, one who has experience with Wallpaper, knows, folding smeared adhesive Wallpaper in a certain way, you can cope alone, would have been only a ladder. However, it is only papering the walls. And now often, and the ceiling whitewashed, and paste over Here too without an assistant to do difficult.
Though, according to the Hungarian magazine”, Earmaster” and here savvy people find a way out. One of them is the use of unusual nozzles on a metal ladder. Its task is not just to extend the ladder, and just replace the absent assistant at pasting of ceilings. While one end of the ceiling Wallpaper is glued, the rest of the cloth is supported by the nozzle, giving the opportunity to single-handedly perform such a difficult job.

Device nozzle
The base fixtures — wooden bruski section 40×20 mm, the length of which depends on the height of your ladder and the distance from the ceiling in the apartment. At the top of the bars are connected by a cross member (plank or plywood), and above it on the ends of the bars from the external side are brackets of metal plates between which is inserted the platen, pivotally mounted with screws through the holes in the brackets. The cushion can be made of a wooden handle (like a spade) with a diameter of 25 mm. Length of the cushion as the tie bar, about 600 mm.

In the lower tapered portion of the nozzle bars are joined with the same segments, which are connected by a boardwalk strip. In the middle it has a slit through which a bolt with a wing nut fastened on the opposite side of the hook of the metal plate: the wooden head is set on the arc of the ladder. The slot has an elongated shape: it is needed to adjust the fixture height to bring the roller to the ceiling or somewhat lower.

Top end of the lining nailed plywood shelf with cutouts for the bars. It is possible to put the brush, sponge or rags — all that helps to squeeze and flatten glued to the ceiling paper cloth.

The use of nozzles

How does this device replaces a second helper? Because the repair room usually starts from the ceiling, then taping it is done in the first place. This nozzle first sets his hook in an arc, metal ladders, and thanks to the slots on the fingerboard governed by its approximation to at the point, after which the wing nut fastener is finally tightened. “The assistant” is ready, “feeding” him the cloth. 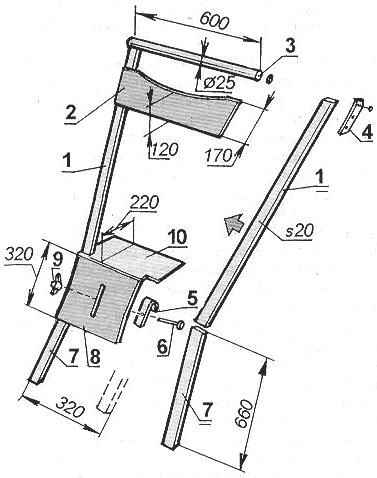 The nozzle on the ladder: 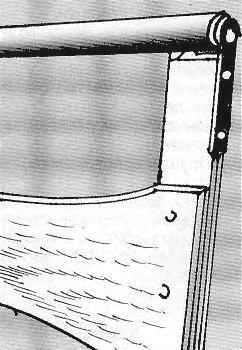 The connection of the bar with a cross and roller 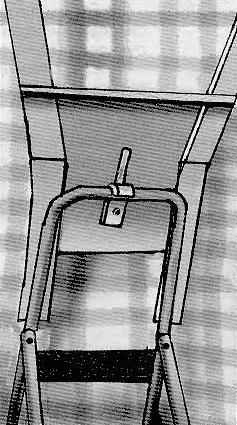 Install the nozzle on the ladder 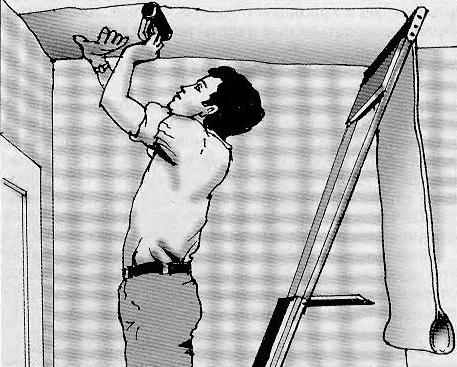 “Start” papering the ceiling and started dragging the cloth 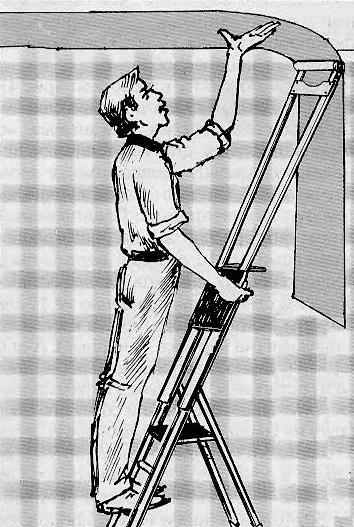 Completion of gluing the cloth to the ceiling

It folded adhesive side in half and gently spread using a roller. The ladder moves to the “start” papering the ceiling. Walking up the stairs, take the free end of the adhesive Wallpaper and “catch” it from the ceiling, pressing and leveling.

Then the ladder with a nozzle is moved some distance in the direction of sticking. The panel thus also moves freely on the rotating shaft: can again to relieve some of the adhesive side of the cloth and sticking to the ceiling. Such visits are repeated to the opposite wall, until all cloth will not appear on the ceiling. Then move on to the next.

Of course, like any device, a nozzle on the ladder requires prinorovilsya to her, and the first panel may seem complicated. But from flag to flag experience will grow, will appear the desired skill and the work will go smoothly and faster. And most importantly — will be executed is not worse than assistant.