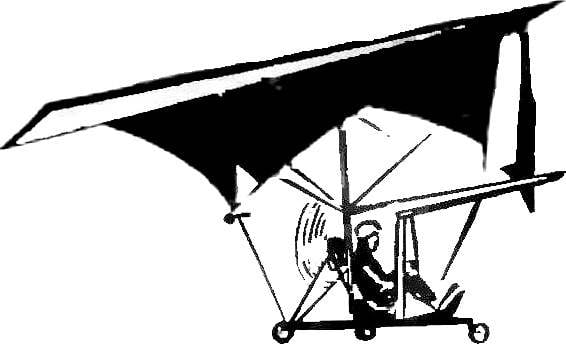 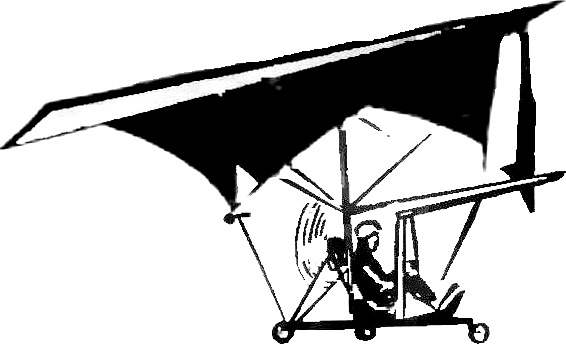 One of the main problems faced by the Amateur constructor engine aircraft — selection or production of the power plant the necessary power, weight and efficiency. This problem is solved normally, on existing capacities and experience of building such units.
There is no doubt that their designers can be as technically literate people, and are not sufficiently familiar with the basic provisions of the theory of internal combustion engines. In this article we will try to give an analysis of engines, presented at the last Moscow rally ultralight aircraft, and some tips on choosing the parameters of the internal combustion engine, the observance of which will reduce the relatively expensive and a long way to search, will help significantly reduce the likelihood of technical risk.
All internal combustion engine aircraft, presented at the meeting, can be divided into three categories:
1. Serial (boat, motor, internal combustion engine from the snowmobile equipment, automotive), adapted without major alterations.
2. Own design, with extensive use of series parts, motors.
3. Original design made from the paper.
These motors, including bankruptcy, are summarized in table 1. In column 1 vertically, provided their effective maximum capacity of Ne maxis spent on the rotation of the propeller, whereby torque on the shaft Mcu is converted to axial thrust. For judgments about the capacity of the power unit, building characteristics-rotor, screw selection and linking it with the engine you need to have the external characteristic curve of maximum capacities, which can develop the engine at different RPMs at full throttle. Accurate data can be obtained when the brake test stands that not every fan is available. There is an approximate way of constructing external characteristics on the basis of theoretical calculations, if there is at least one point of power and revolutions of the crankshaft (they are usually listed in the factory data). 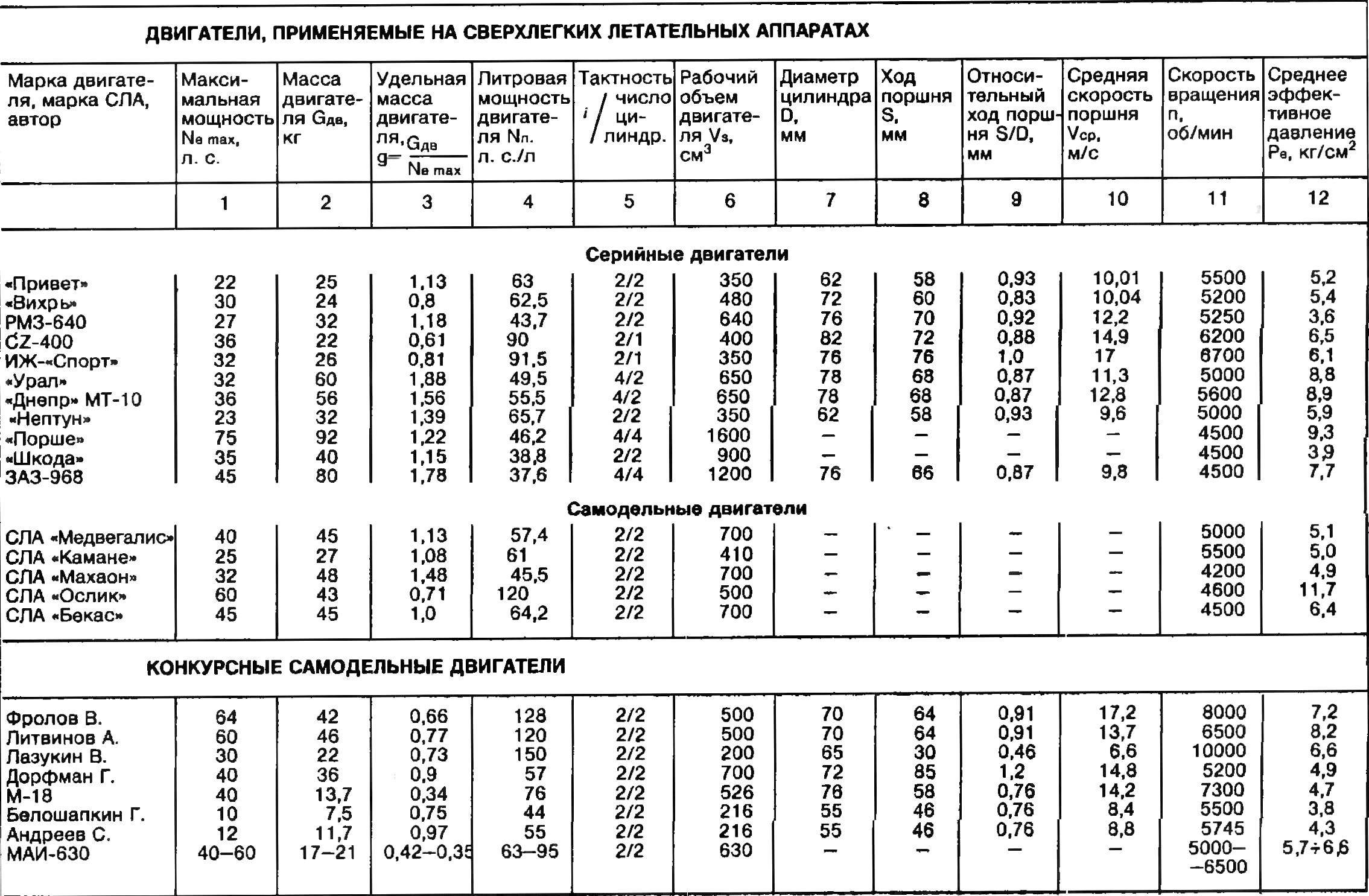 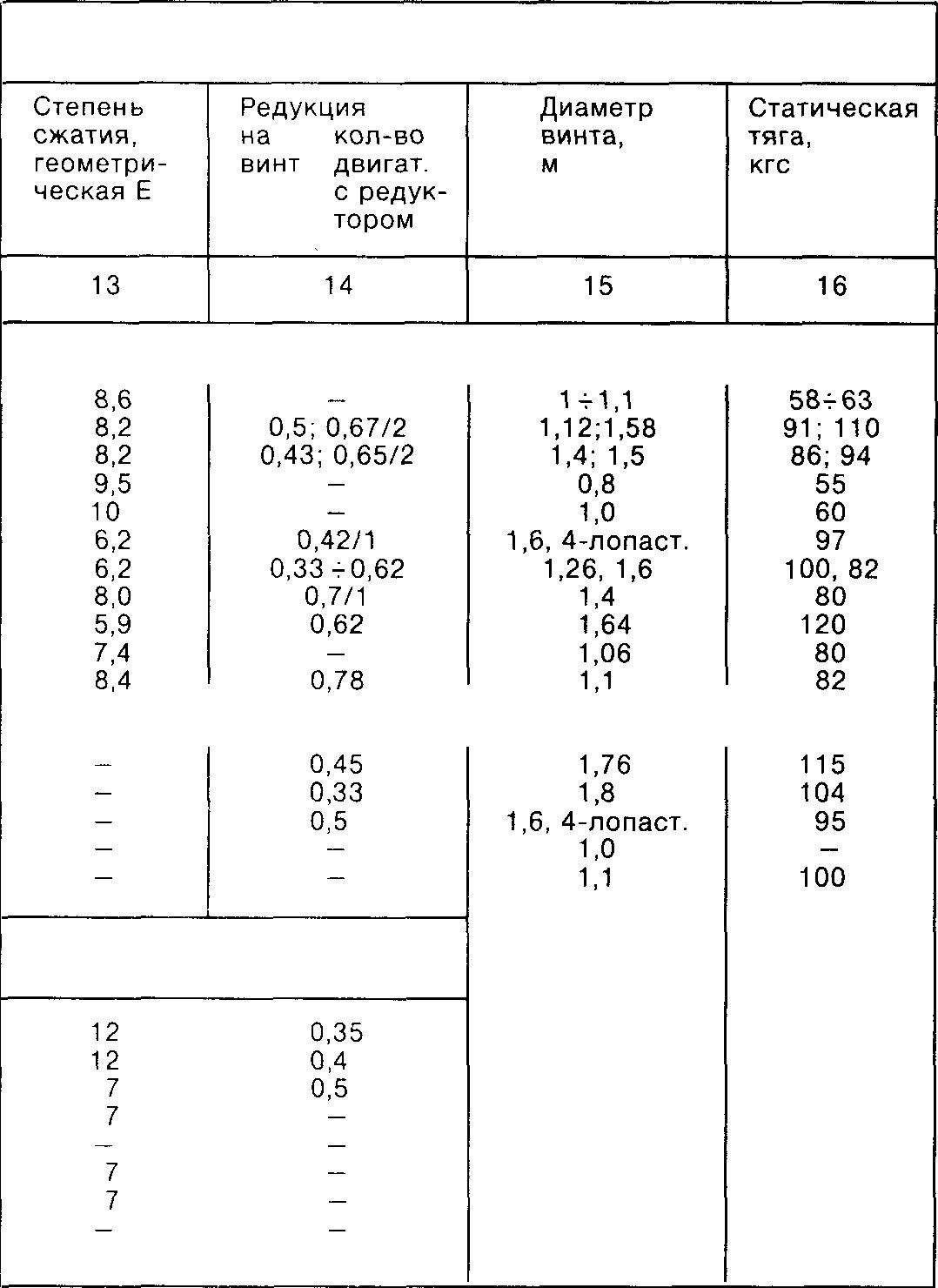 Table 1.
This method consists in the fact that at constant composition of the fuel mixture, the power required to overcome internal losses, changes approximately proportionally to the square of the speed.
Denote:
N1 — display-power, HP;
NTr — power spent on overcoming friction forces of the pistons, pumping losses during blowdown, rotating assemblies, ignition distribution etc.;
Ne is the effective power;
N1‘, NTr‘, n’ rpm — current capacity values and speed.
Then:
N1‘=N1*(n’/n) (1)
NTr‘=NTr*(n’/n)2. (2)
Power NTr estimated mechanical efficiency (ηm), which is in the range of 0.8—0.9 for motors with the rotational speed of the crankshaft between 4,000 and 6,000 Rev/min and 0.6—0.8 for more high-speed.
For example, we have a building in this way the external characteristics of the engine RMZ-640.
Declared plant maximum effective power:
Ne max=27 HP at 5250 rpm.
Take mechanical efficiency ηm=0,87, then the indicated power of N1=Ne max/ηm=27/0,87=31 HP
The power of friction: NTr=N1-Ne max=31-27=4 HP
We define by the formulas (1, 2) N1‘, NTr‘, Ne‘, pre-specifying a number of values of the speed n rpm and bring the results in table. 2. These data build external characteristic Ne=f(n) (Fig. 1). 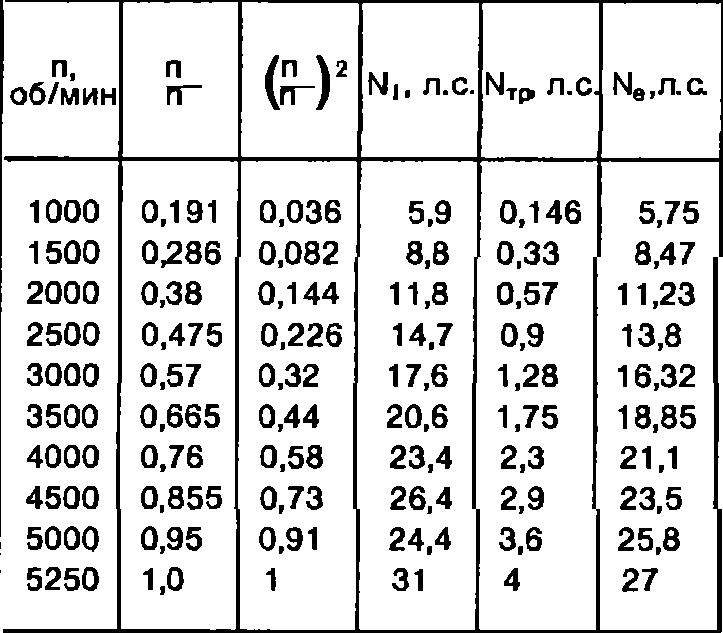 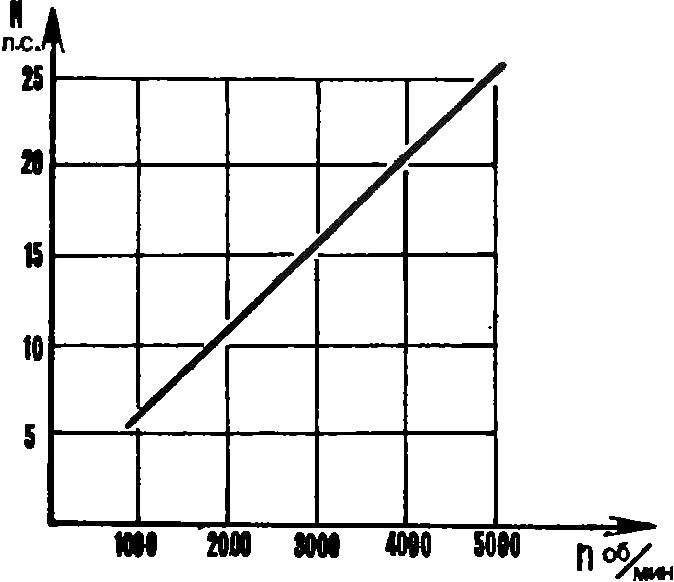 Fig. 1. The external characteristics of the engine RMZ-640.
There are maximum (or takeoff), nominal and maximum operating power. The maximum power of Ne max is getting when the engine is at full throttle on the ground. This mode for the engine is tight and limited to 3-10 minutes, the Power is less than maximum 10-15% is called the nominal (Ne nom). You can use it for an extended but limited time, no more than 1-1. 5 hours. Operating power (Ne ex) is less than the maximum by 25-30%, engine running, this power is not limited.
Momentum corresponding to the kinds of capacities, called the maximum, nominal and operational. By itself, the motor power still does not show on its merits, as it needs to correlate with its mass (see box 2).
Weight greatly affects the design of aircraft engine, determining the degree of tension of all its parts. Distinguish between dry weight and flight. In dry weight of engine in aircraft, it is customary to include a lot of components such as the carburetor, suction pipes, magneto, spark plugs and wires to them, the details of the launch system, the flanges of the exhaust nozzles (but not the pipes), deflektory, petrol and oil pumps. When calculating the dry mass not accounted for the air screw and its sleeve, hood, exhaust pipes, radiator, power generator, control and measuring devices and the wiring to them.
In flight the mass of the propeller installation is the mass of all aggregates necessary for flight, filled with oil and fuel tanks.
Flight weight as an objective criterion for weighing the quality of the motor is inconvenient that it takes into account consumable goods (fuel, oil), depending on the purpose and type aircraft. The total mass of these components is not easy to determine, so the mass of motor is characterized by a less complete but more accurately delineated by the concept of dry weight.
Column 3 shows the comparative evaluation of motors of various capacities on mass.
g=gDV/Ne max,
where GDV — engine dry weight, kg; Ne max — maximum power, HP
When calculating the specific gravity, as a rule, the dry mass of the motor refers to the maximum power. Specific gravity is one of the most important indicators of quality aircraft engine.
The specific gravity of a modern Western engine for ALS is 0.5—0.6 kg/HP, the best representatives of 0.25—0.4 kg/HP for Example, the specific gravity of the two-stroke engine for ULTRALIGHTS American company “Kolbe Corp”:
g kg/HP Ne max HP
0,32 6
0,25 18
25 0,23
Statistics on engines, presented at meeting, gives the following figures: 34% of Park the engine is from 0.61 to 0.91 kg/HP, the rest 66% — from 1 to 2 kg/HP, which is 4-5 times more than the special motors for ultralight aircraft.
The best indicator of the competitive engine M-18: g=0,34 kg/HP, the worst of 2.04 kg/HP of the engine “Dnepr” MT-10.
From the theory of similarity it is known that for geometrically similar engines, the mass is proportional to the cube of the diameter of the cylinder, and power is proportional to the square of the diameter, that is,
g=gDV/Ne max=A*(D3/D2)=AD.
In practice, this ratio is not respected, because of the strict geometric similarity between the same parts of different sizes it is impossible because sections of many items set the conditions of production; casting thickness, stiffness, mounting conditions, etc., so these section sizes can be considered constant. Then: GDV=AD2. Statistics show that the engines of medium and large size well follow this relationship, thus:
g=gDV/Ne max=A*(D2/D2)=A=const.
This dependence is violated in the region of small D in the direction of increasing mass, and is due not only to the above listed technological reasons, but also because the mass of service units — magneto, spark plug, carburetors, etc. — a little depends on the size of the motor. The relative weight of these parts is negligible at larger sizes the engine increases with decreasing engine size (see Fig. 2). 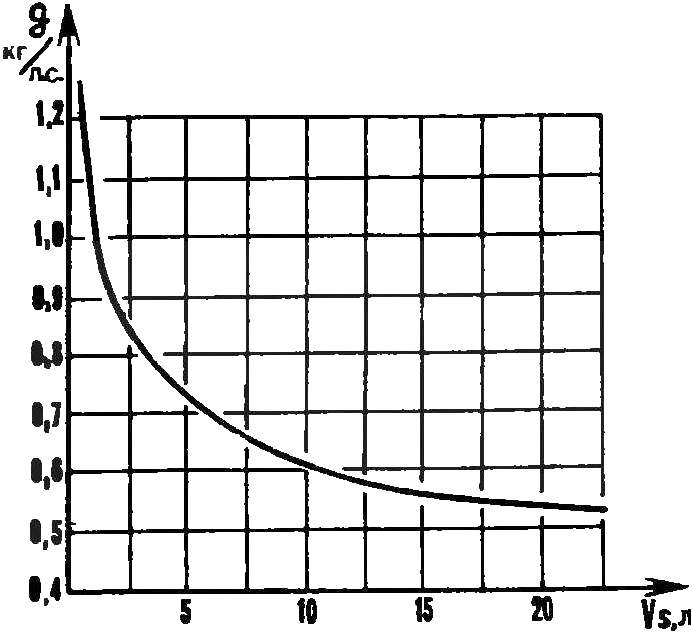 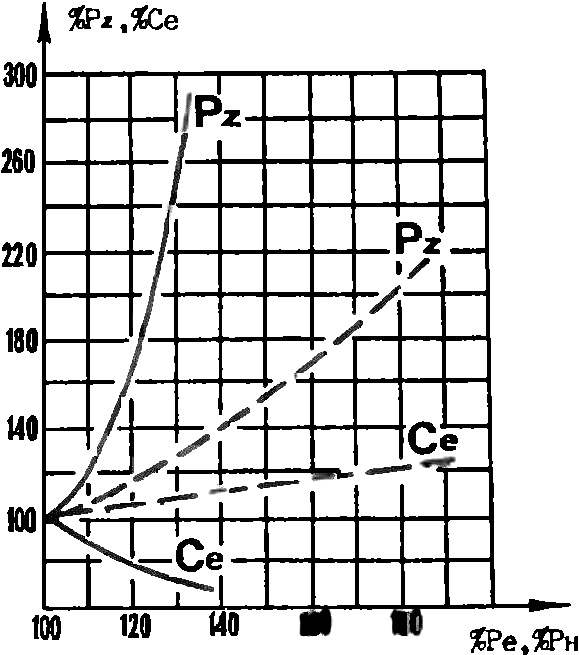