Curious views accompany this anipa everywhere. And no wonder — too unusual looks drown it in the car… a boat on wheels. We are talking about a vehicle that exists so far in a single copy— planing of the amphibian Triton. It was built by a man who, it would seem, very Dalen. D. T. Kudryachev not constructor, and a professional musician for a long time akademicheskom worked in the Moscow musical theatre named after K. S. Stanislavsky and V. I. Nemirovich-Danchenko.

However, Dmitry Trofimovich showed uncharacteristic of his profession the talent of the engineer and inventor to solve a very difficult task: to make a full-sized vehicle not only to swim but also glissirovat (and if you want and even transform it into a “clean” boat).

Tan appeared original suspension with bystrorezhuschej hinges, unusual steering and paradoxical “dry” connectors for the brake hydraulic system, not encountered in transport technology.
Sea trials have confirmed the efficiency and reliability of all systems and units amphibious. Positive ekspertnoe conclusion, specialista US was the basis for the registration of “Triton” in the SAI. In turn, the State inspection on small size vessels (GIMS) suffered him and n the navigation on all inland waterways in the category of “L” and “R”. Since amphibian faithfully serves his master now notary year.
In elektronnoy and the printing press there were reports about the “Triton”. Adnano the current publication is the most complete. It reveals the logic of the search of original technical decisions, allowed to create the vehicle, equivalent in its performance properties can be on land or on water. Together with the detailed description presented and extensive graphical material, which will give interested readers and possibly followers not only understanding of the essence of the original konstruktorska nahoon D. T. Kudlackova, but maybe tolcon to solving their own technical problems. 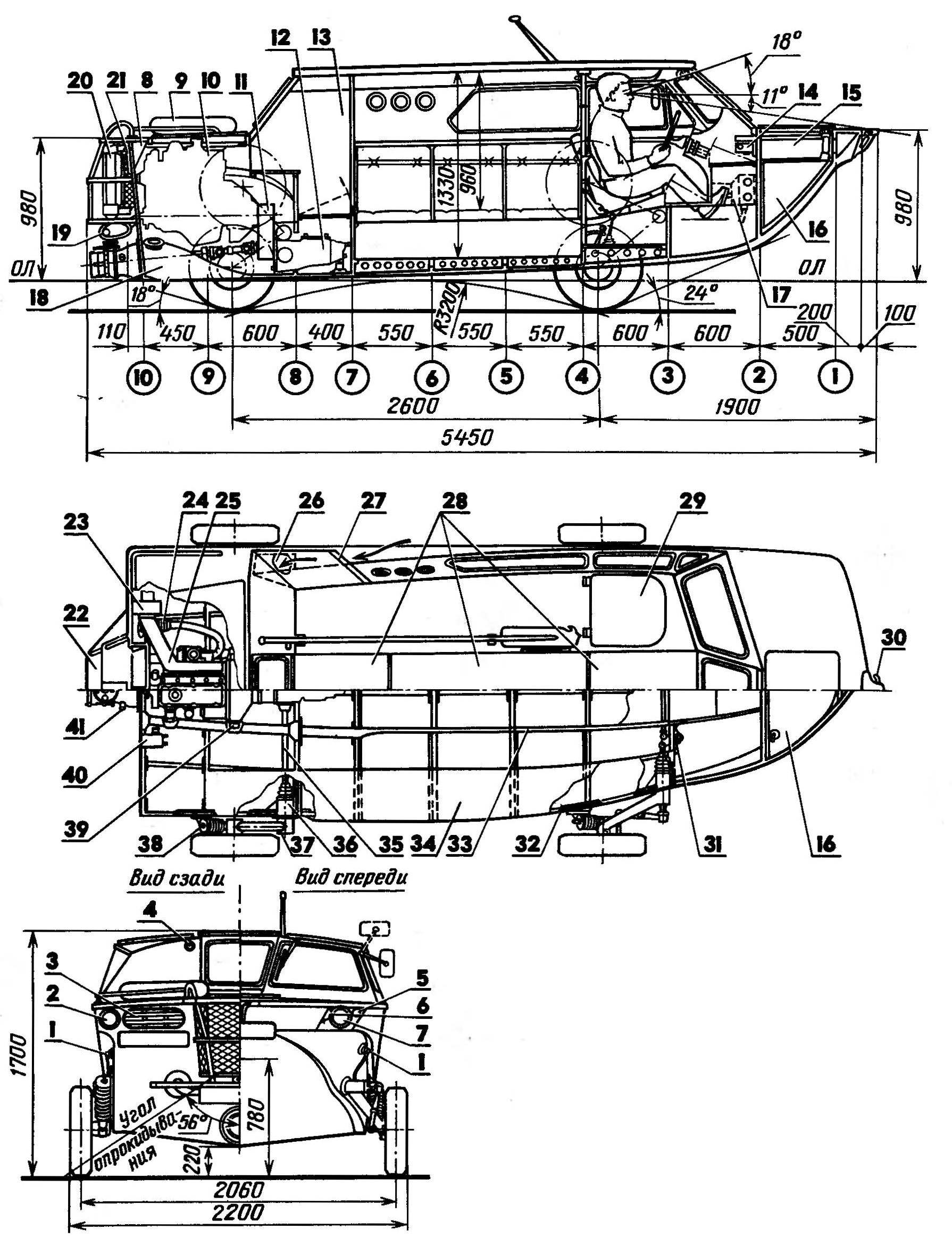 Surprise, as you know— the beginning of all philosophy. For me too it all started with udaleniya, or, rather, with the question: does the amphibious vehicle will forever remain inferior vehicle? Almost a hundred years to accompany him two “birthmarks”: low speed on water and non-compliance of boating safety (low freeboard, poor maneuverability, seaworthiness zero). The result — a ban on water inspection of its operation along with the courts one purpose.
What’s the matter? What prevents wheeled, amphibious vehicle on the water high-speed boat? It turned out, a lot.
First of all, the usual car design. From Naga should be abandoned. Unlike the floating car that has speed 7— 9 km/h even with the factory body, the body of this amphibian must meet the conditions of a new “habitat”, that is, uncompromising to repeat the contours of the bottom of the speedboat.
The architecture of the surface part can be practically any, but then again — given the features of operation on the water. For example, desirable in the normal camerascreen deck with a small slope, because it is a workplace under the lockage, mooring to the pier or the approach to unequipped shore.
Further. Nothing must interfere with the body glissirovat. The entire car chassis — wheels, elements of the steering gear and the transmission must be removed from the water completely. The kopromiss is excluded. Any fairings, or partial screens preload wheels will add speed, 2-3 km/h, and amphibian remains may floating, but the car.
And the last one. If even a significant excess of the recommended carrying capacity has little effect on his running performance, then to amphibians, the implementation of the planing requires a strict coordination of its total weight, of an engine power. There is a threshold to cross which is unacceptable: if the value of the specific engine load greater than the critical value, the amphibian ceases to be planing.
In our case, this threshold — 22 kg/HP, and because of the severe operating conditions of the engine on the water are only 80% of its rated capacity.
Preliminary estimations showed that the hydrodynamic requirements and the conditions of habitability of the dimensions of the “Triton” could not be less than the prevailing camerascreen type “minimal boats with a car engine” with the length of 5 and width of 2 m. In this case it appeared that the curb weight of amphibians with the car stuffed to 300 kg will exceed the weight of the cabin of a boat of comparable size (1000 kg). Thus, the complete displacement of 1 300 kg, it was possible to use the engine GAZ-21 with restriction to 80% of rated power. Thus the resulting specific load 22 kg/HP to exceed the limits restricting the possibility of planing.
This can be explained by the design features and layout of the “Triton”.
CASE
Chine hull shape with a little camber boards have moderate deadrise (5% on transom). The Board in the areas of suspensions of the wheels vertical. The nasal branches of the frames dowry is very large collapse, which allowed us to get a large, almost rectangular deck. Note that ia theoretical Carthage (and in table blazovich y) zygomatic Briz-hotbounce, the vertical portions of the sides in the area of suspensions and camber nasal frames for simplicity is not shown.
Constructively the hull of the amphibian — bearing. Rather, it applied the species — carrying bottom, the bottom of which is a solid box-like platform consisting of a cut-cov-speci.
Power set the case is made by longitudinal-transverse scheme with the use of oak and pine. Frames are assembled on the brackets on both sides. Toprimary have a variable cross section with the broadening of the cheekbone. I-beam longitudinal framing and covering panels (aircraft plywood in various thicknesses) can interface “on condition”. The case outside is covered with fiberglass. All connections are epoxy glue with opress-cownoy screws or clamps. The hardware was used only galvanized or cadmium. Inner surface of the housing coated with epoxy varnish. Unsinkable by its secured sealing of the forebody sections and the bottom of the carrier.
The slope of the transom aligned with the angle of the jet and is equal to 6 degrees to the vertical. On transom mounted hard ladder: he is comfortable on the water and on land and also serves as a fence radiators, muffler and reversal-steering complex of the cannon.
The case is made fully closed, without cockpit and side Potapkin (uchastkov narrow deck along the side). Instead of them — through the Central passage along the axis of the amphibian. When otkrytoi the roof it connects the bow and stern sections of the deck. The middle fold of the windscreen leans back and the rear door and the roof panel are formed in a compact package and are mounted to starboard.
Because the body had hung a lot of “unnecessary” ordinary neteru components and assemblies, particularly acute problem of weight loss. At all stages of the work carefully justified as the choice of the materials used and the dimensions and cross section details. 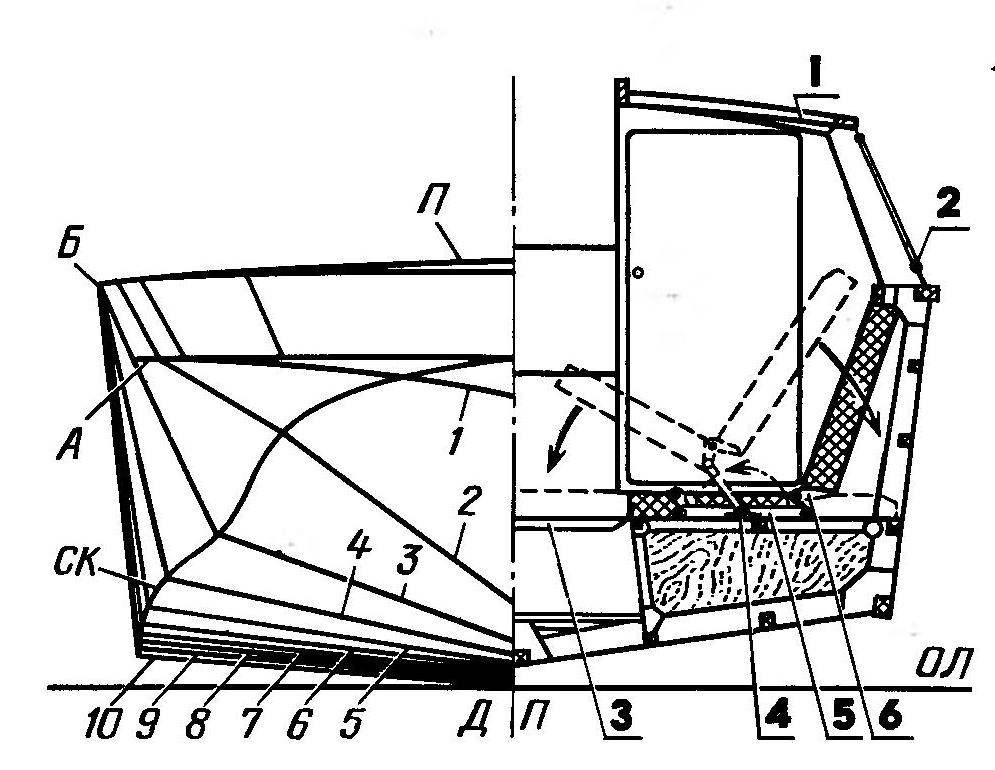 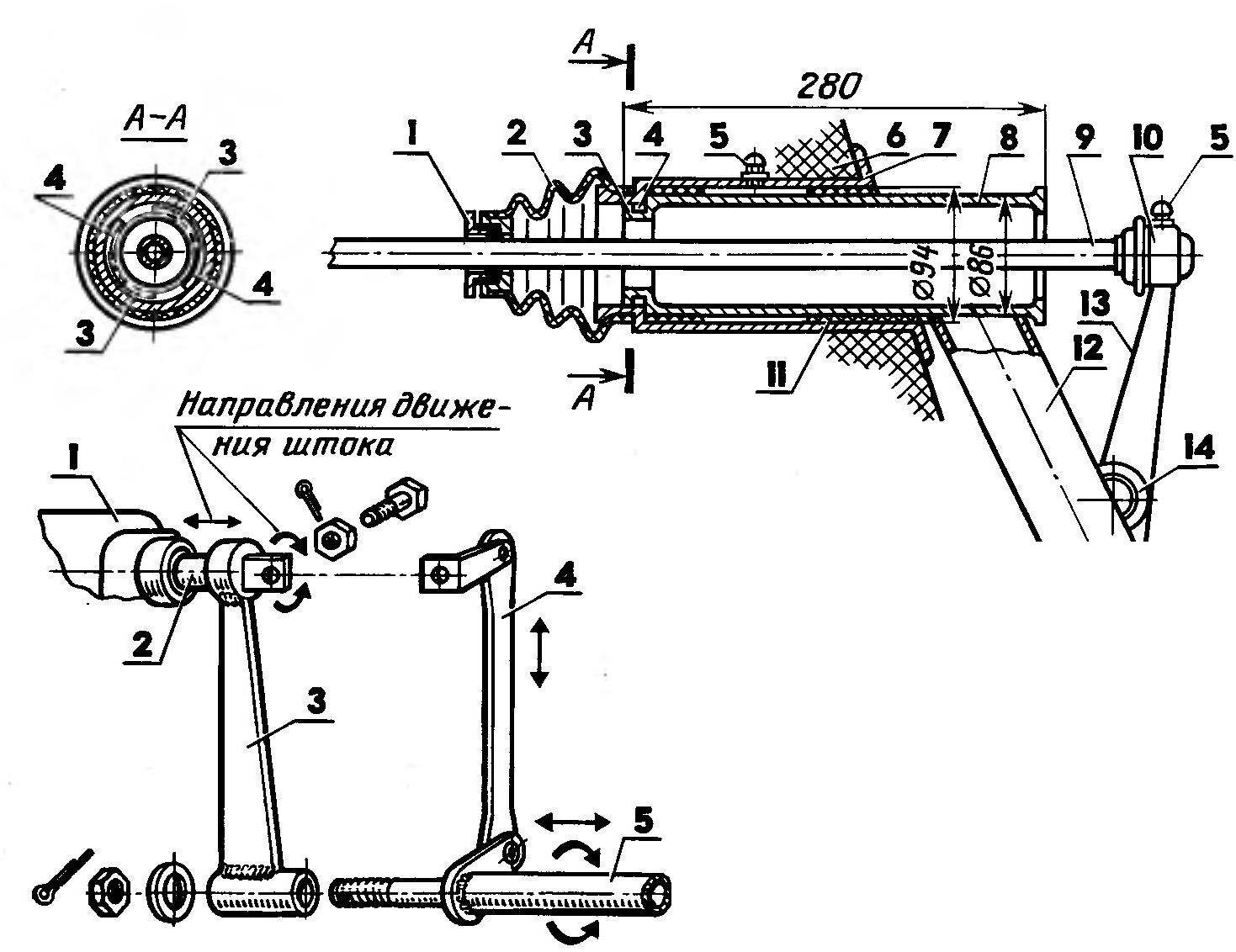 The intermediate node transmission control:
1 — rear cover of the gearbox 2 stock slide, 3 — the console, which transmits the reciprocating motion of a 4 — rod transmitting the rotational movement, 5 — shaft control box.
Important reserve of reduction of weight there was multiple use of structural elements subject to rational relationship. For example, the vertical side members of the carrier bottoms are used and the walls of the lockers; they, being reinforced at the rear, form the basis of the sub Basement. Different size of space (400, 550, 600 mm) is not only strictly linked to the living space, but also eliminates the duplication of a set of cross as coordinated with the mounting dimensions of the units chassis. Reference nodes suspension of the wheels supported by two pairs of reinforced frames, and the two pillers on the sides of the Central passage partially relieve the power set of the roof and at the same time serve as a support for the mast for more sail armament.
CABIN
The rejection side Potapkin allowed to expand the cabin from side to side, which greatly increased its useful volume. The interior space is divided into two parts: the main tube, the boundary which are the backs of the front seats and pillars, and the salon is located aft of it a galley and a wardrobe.
Front seats — driver and Navigator — have folding duralumin frame and can be installed in two levels with a difference in height 400 mm. Lower position normal — “car”; the upper is used only on the water for improved visibility in difficult conditions of navigation. For this above the seats made hatches. Cover them recline, and sun visors, turned up to protect the face of the driver from the oncoming air flow, is very significant at speeds of 40-50 km/h.
Six seats in the cabin located along the sides on the lockers; four of them are equipped with a hinged and easy transformirovalsya in a full-sized double bed across the hull. To reduce the weight of all the seats made of slabs of foam PVC 1 50 mm thick, covered with polyurethane foam and covered with leatherette.
Equipment and stock of products is stored in twelve lockers and large boot in the fore peak (above the tank). In addition, there are side pockets and the mate “SAC” for route maps, binoculars, chinafotopress and small things.
Ventilation natural through half-open or fully open any combination of doors, doors and roof panel over the Central aisle.
A few words about the galley. Essentially, the cabin as if it is not, because when pushed into a niche Desk he closed and similar to located opposite the wardrobe. However, there is enough space for the two “Bees” slide-sink with tap from the reservoir of drinking water and all kitchen utensils. In the niches surround the door kept the thermos, small dishes, spices, tea, coffee, sugar.
POWERPLANT
Engine GAZ-21, gear shift with the differential from “Zaporozhets” and a homemade reducer are a single power unit. It is set on five rubber pads close to the transom, above the water cannon. With this arrangement minimises the length of the engine compartment.
Access ratchet colineal — through the hole in the transom, the overlapping spring-loaded lid with seal.
The engine cooling system dual. Aft it has required some add-ons: for a more intense airflow water cooler installed guide casing; a regular four-bladed impeller fan replaced a light shestilopastnye deployed in the opposite direction; a cooler from the GAZ-51. Air enters through a separate carrier-based air duct and partly across the wide gap between the transom and the housing of the fan. 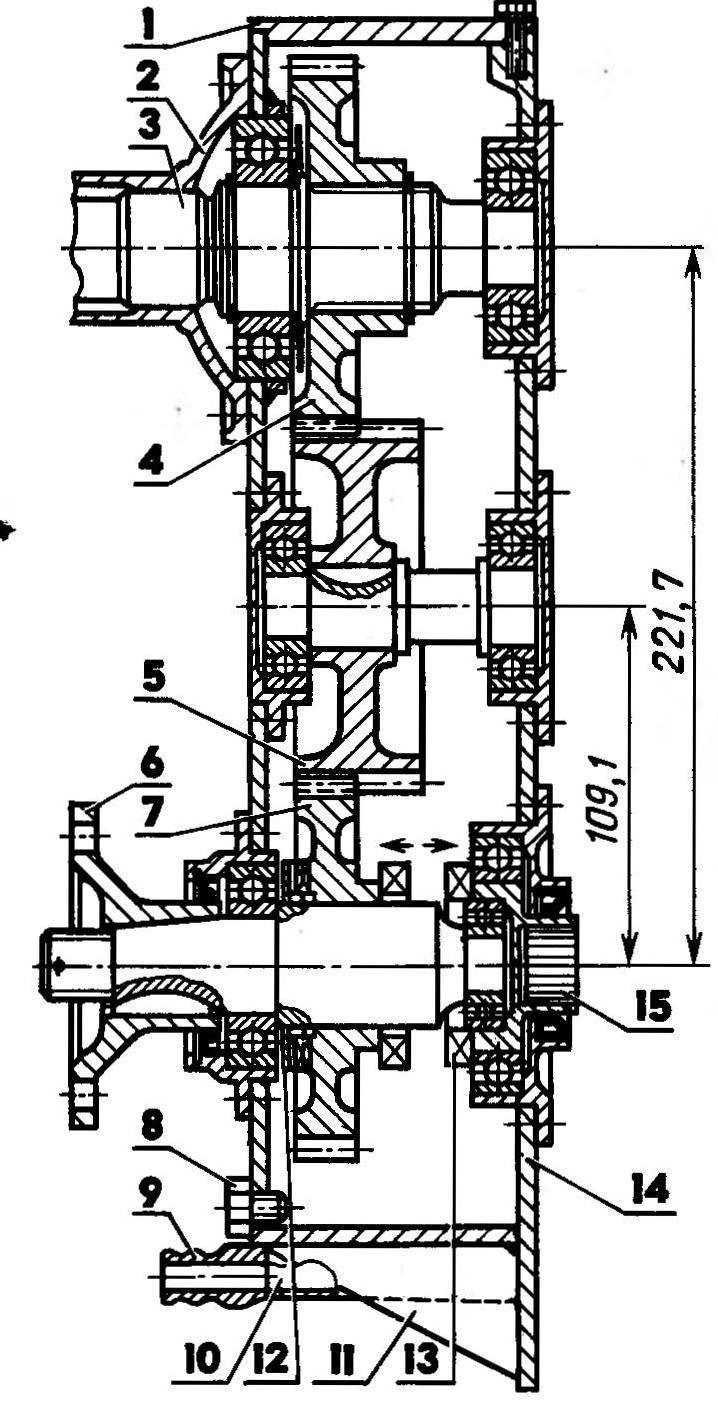 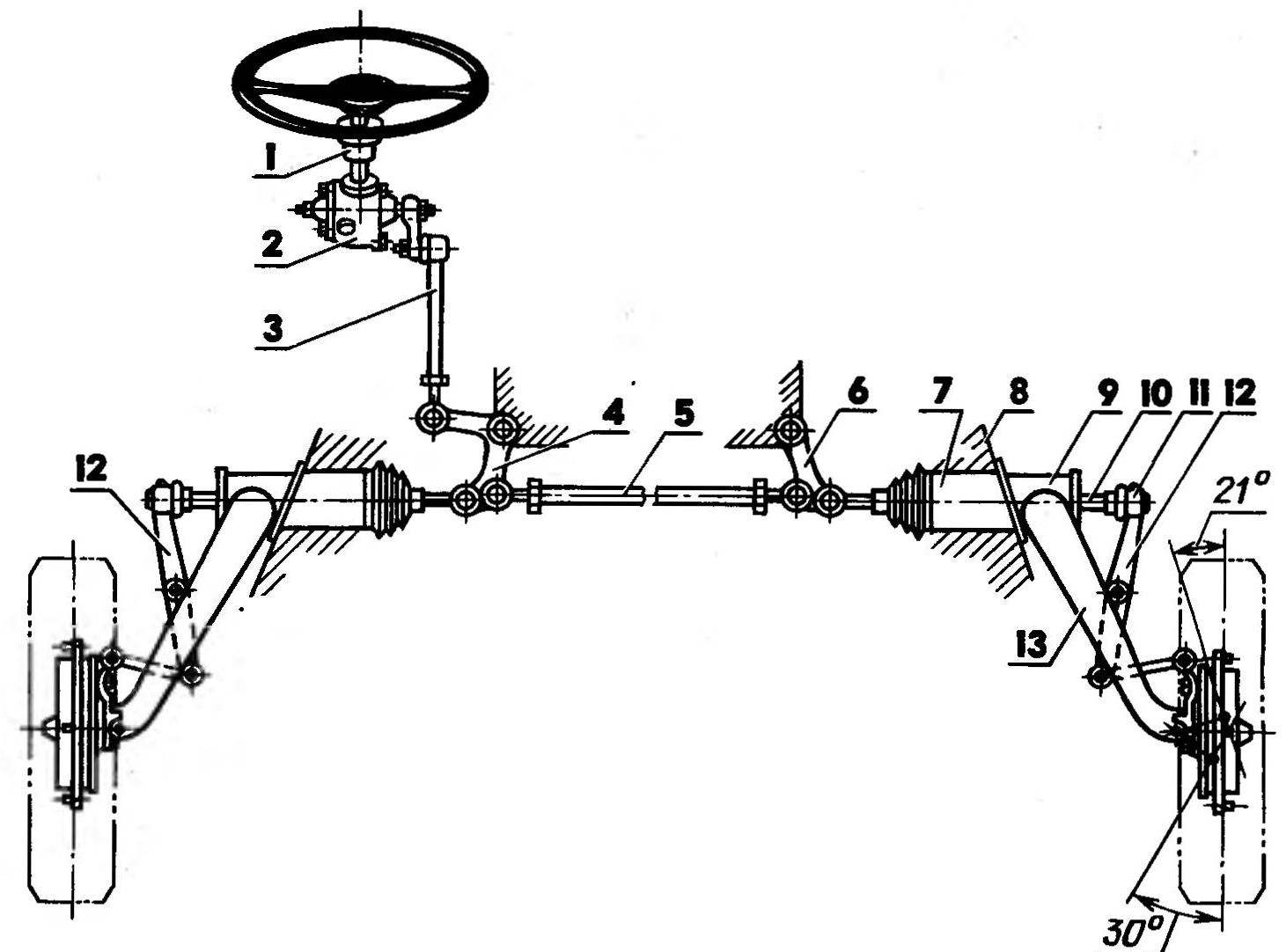 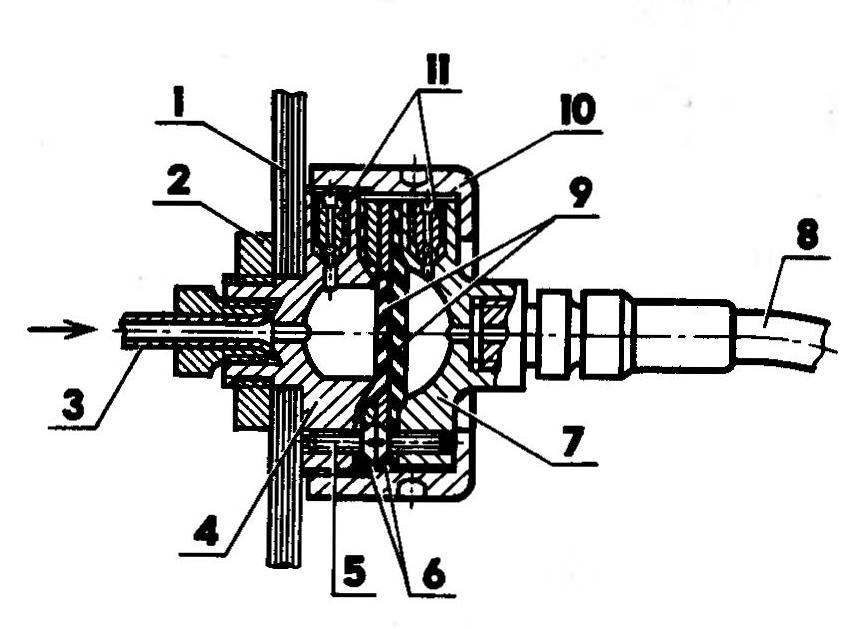 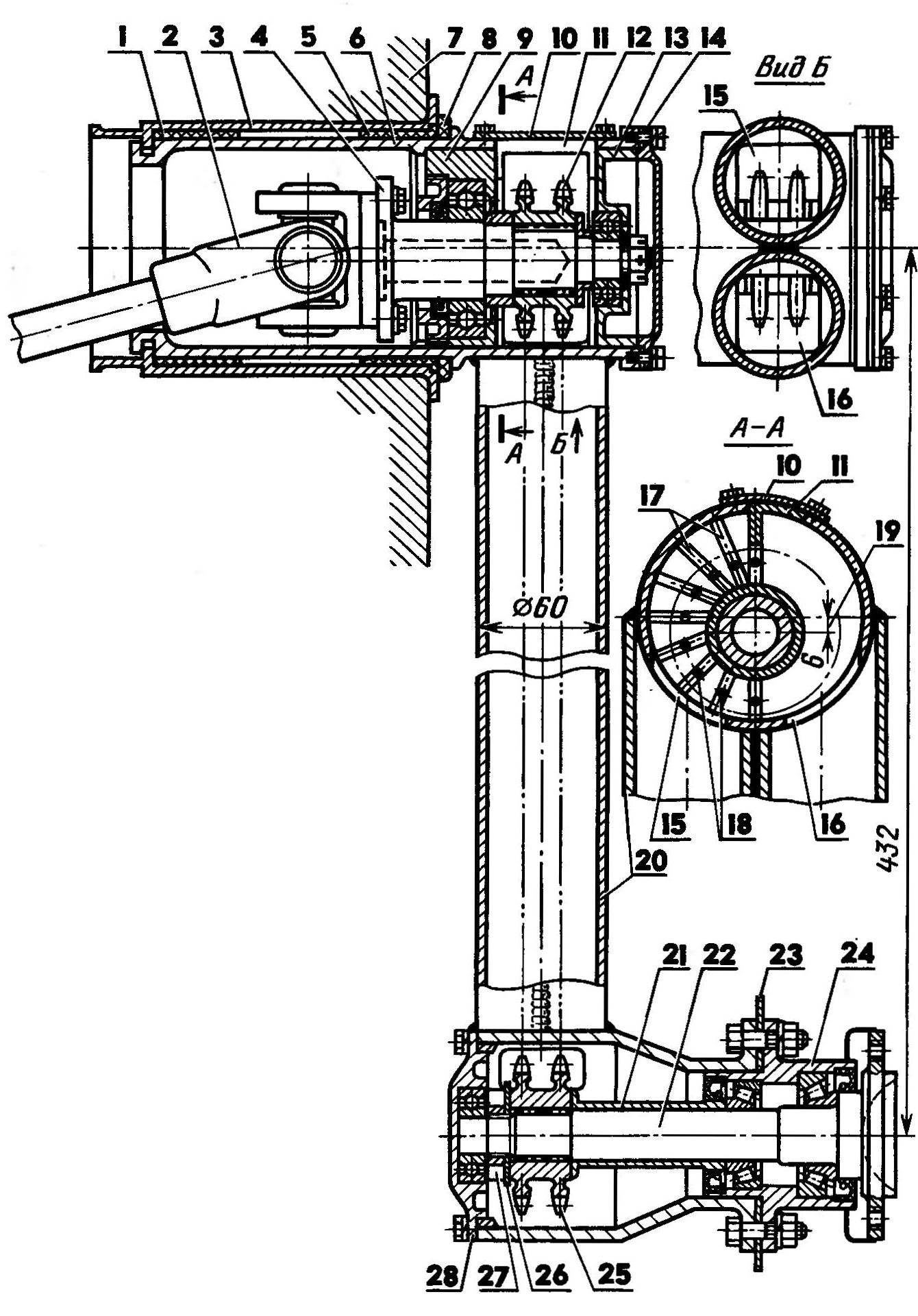