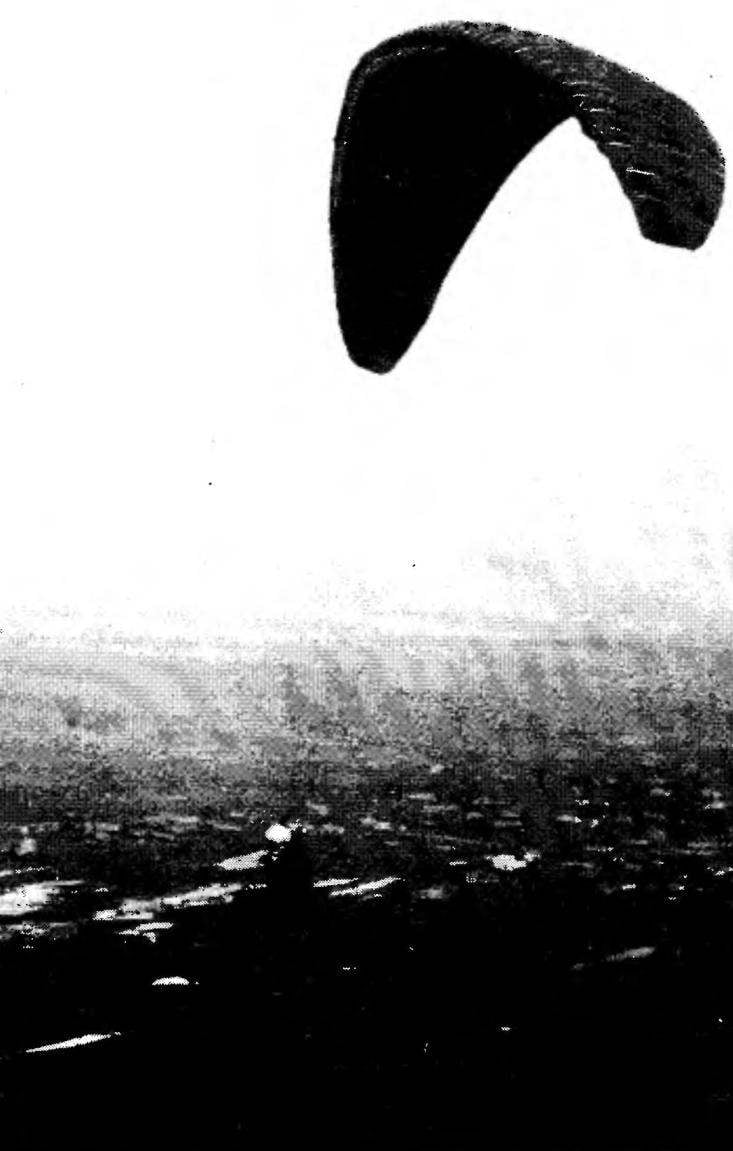 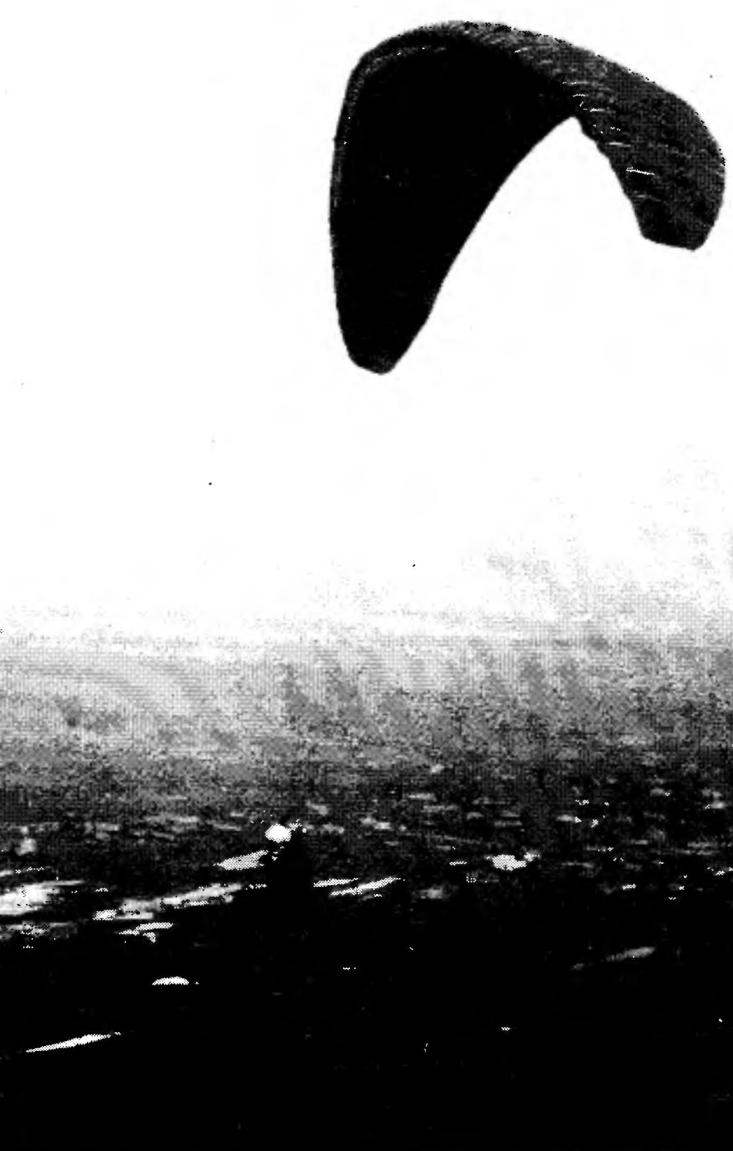 Flight from the Orion constellation, the constellation of the Scorpion, namely the alpha of the constellation — Antares, would require probably much more time than creating the paraglider, called star names. Family paragliders series “Orion”, which became a safe guide to paragliding for hundreds of pilots, for the period from 1986 to 1994, was developed more than ten modifications. The Orions to the present time are respected due to their high reliability and keep the palm as the first domestic production gliders (beginning of serial production — may, 1990, protected by a certificate for an industrial design. Authors: O. Zaitsev and A. Chernovalov).

“Orion” started to fly on mount klementieva in Koktebel, where, after preliminary flights the most serious test aircraft conducted Nesterov V. Kotov. Then on the mount ay Pagri in Yalta glider experienced pilot-instructor of outdoor sports from Germany. Later on it worked out safe ways singles and doubles towing flight (1990 — 1991), and tested the first domestic paramotor Oleg Ora made on the basis of the Izhevsk motorcycle engine (1992, the name of the powered paraglider — the “notice-Latina”), V. Bozukov planned from the slopes and peaks of the Pamir mountains and experimented with flying radio-controlled robots (1991 — 1993). I myself participated in the “Orion-27C” in the world Cup (Switzerland, 1993) v, and so on. “Orion” has won prizes in almost all the competitions 1990 — 1993 and 1995 in the CIS Cup A. Kobyshev, “moved” from the mother glider on the unusual apparatus on the eve of the competition, and took 3rd place.
In January 1992 my wife and I organized the “notice”, which still performs all development paragliders and sleep , disguising them.
Simultaneously with the modifications of the “Orion” was created and pilot samples of new paragliders. So, in early 1993, developed and tested the device with a small area of the dome (19 m2) by the name of Jonathan, who had many constructive innovations. First, it was applied a cross cut upper surface of the dome (similar to a hang glider) and is more flat shape of the center section in combination with the deviation of the end parts down with small radius. Secondly, use a thin profile with a relative thickness of 9… 11%. Thirdly, changed the design of the nodes connecting the sling to the dome. All this together provided a range of flight speeds comparable to a glider that could not be obtained on other gliders of the same area, for example, Trilair-19 Swiss company Ailes de K. However, this device proved to be somewhat premature and work on it while on hold. After reading a similar technique during participation in world and European Championships (Slovenia, 1994) began the development of new paragliders in the classes performance (sports training) and competition (sports). So, in 1995 came a series of “alpha” with the lengthening of the dome 5.3…5.6, and in 1996 — “Antares” with the elongation of 6.6 7.3…(parameter “elongation of the dome” — the ratio of the square of the magnitude of the dome to its area, this increase provides an increase of aerodynamic quality of the wing). “Alpha” and “Antares” are essentially links to one direction, as the hook is based on Delta-dome-shaped in plan. In other words, they have a direct sweep down the front and back edges. It deltoid dome shape combined with the right set of profiles (ribs), and a certain adjustment lines of the system provided clear improvements in performance and reliability. These preliminary conclusions made after comparing the Antares in flight
1996 — 1997 years, with the best examples, such as Zen (ARSO), Hoop and Xenon (Nova) and others. But the “Antares” will be discussed later when you have gained practical experience.
Basic tactical and technical characteristics of paragliders 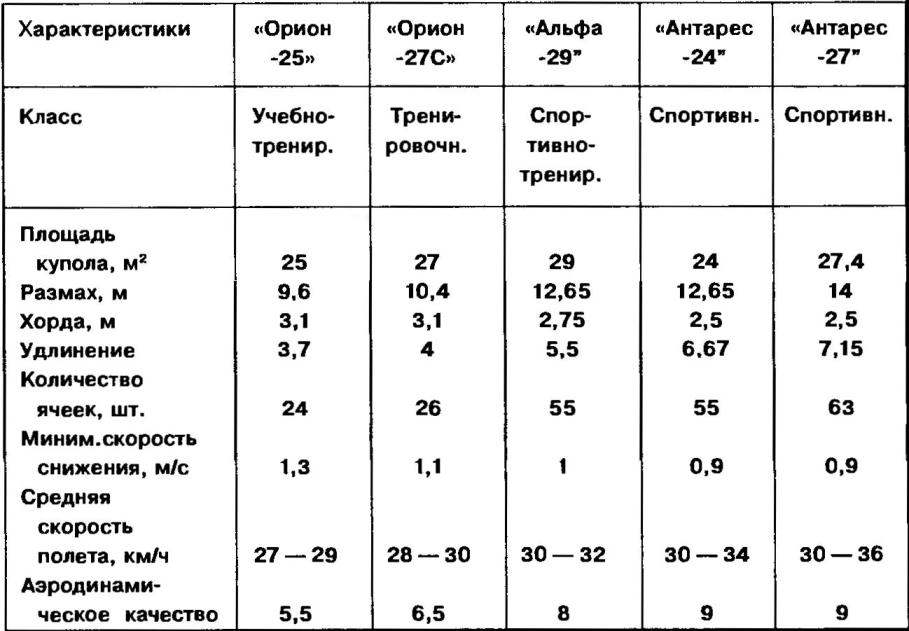 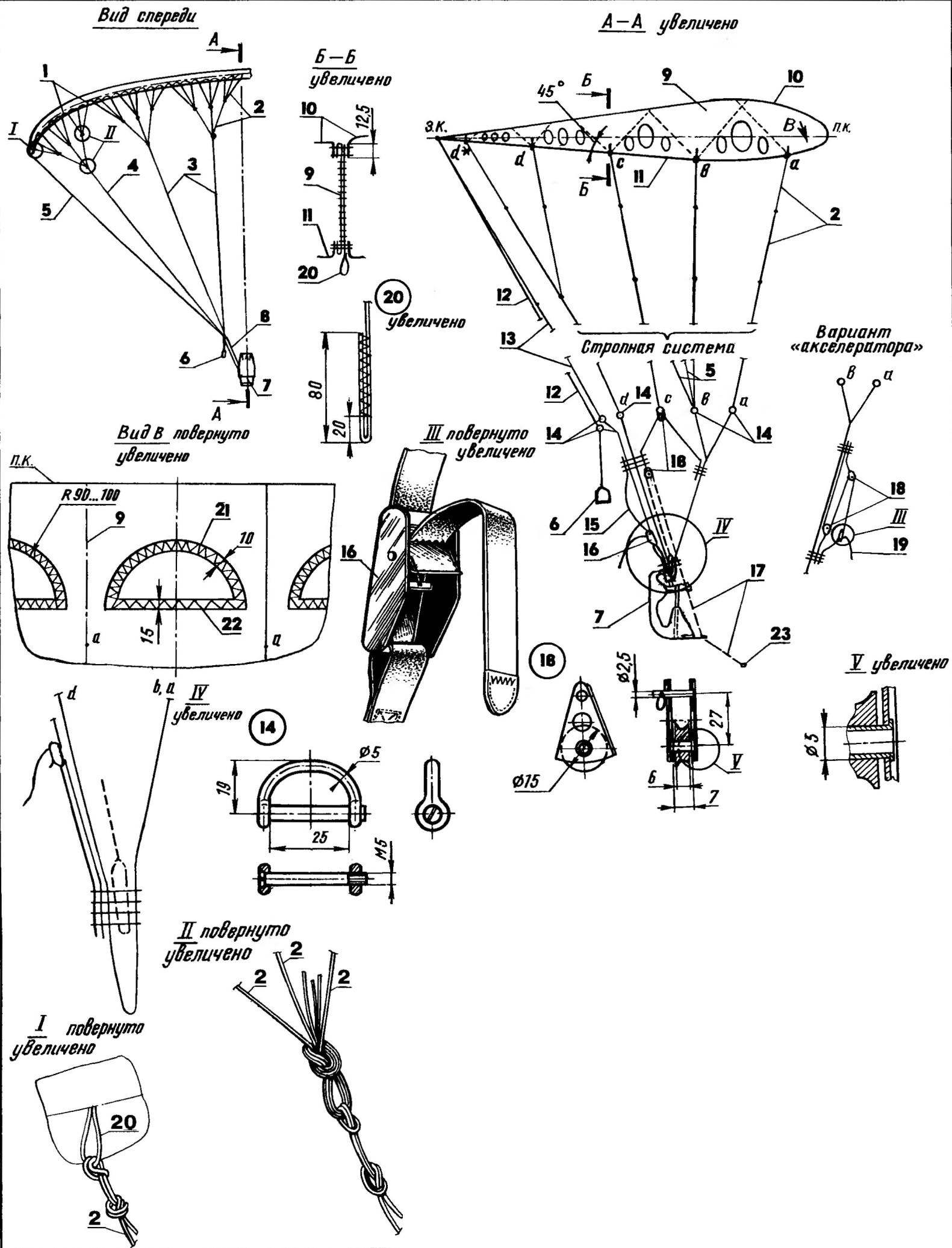 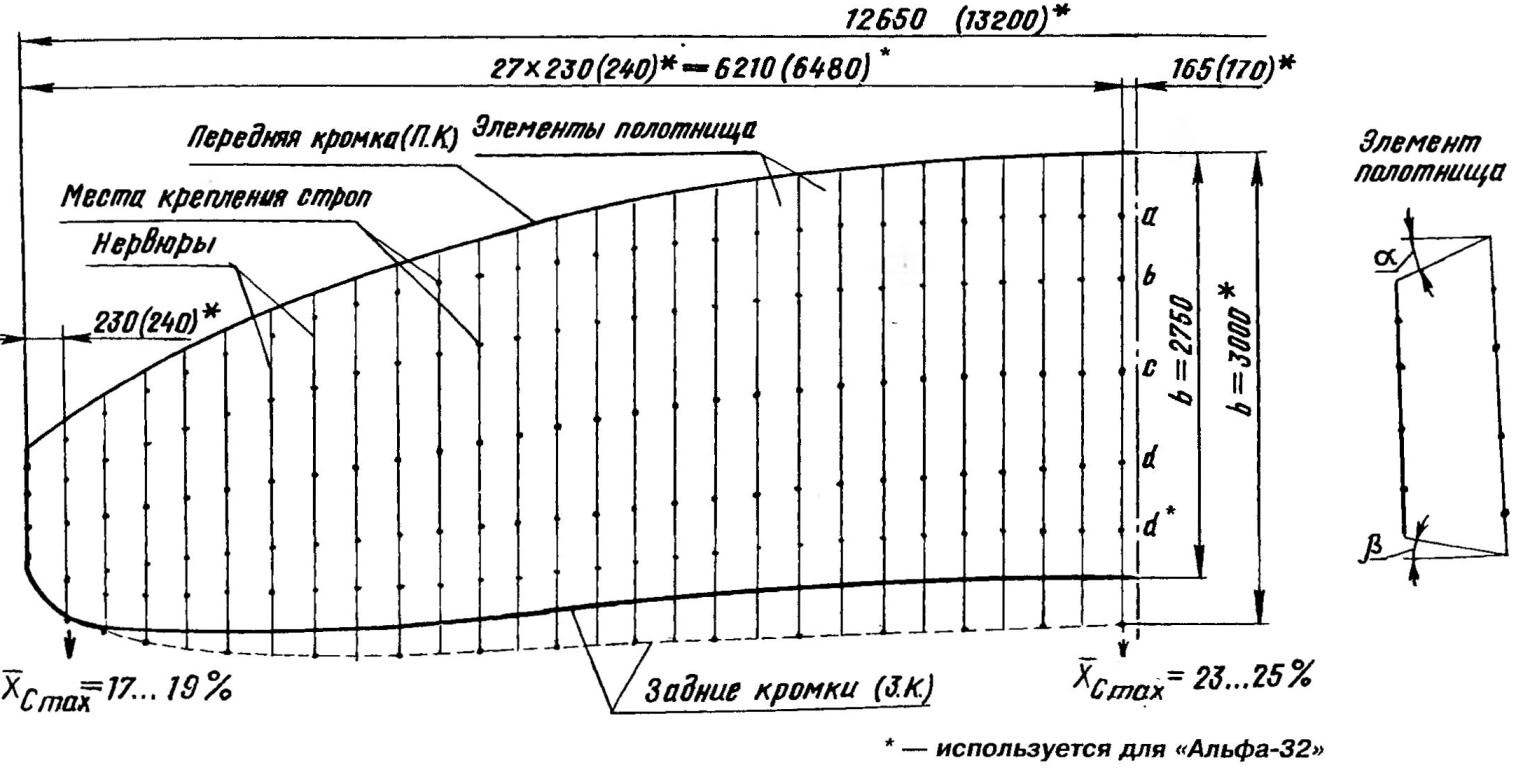 The dome of the paraglider (VCSEL).

Characteristics of the profile of the dome. 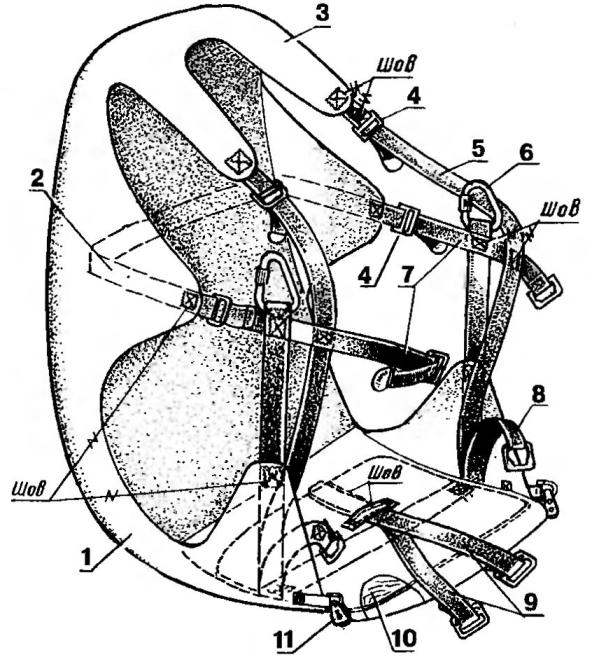 Suspension system:
1 — the basis (or backpack avizent fabric), 2 — strap chest, 3 — shoulder valve, 4 — buckle, 5 — shoulder strap, 6 — carabiner climbing, 7 — adjustable chest strap detachable, 8 — foot strap upper, 9 — lower adjustable webbing foot, 10 — liner (plywood s 10), 11 — the block of the foot trimmer.
In this article, it is appropriate to focus on the paragliders of the series “alpha”, for which “Antares” can be considered as an option, confirming the correctness of the chosen direction in many ways. For example, the same elongation of the dome (7,3) today at least one — half exceeds the level of most of the foreign sports paragliders.
The first experimental model of “alpha” was made in January 1995 and had at may have logged over 30 hours. Of these, about 20 hours were required for the adjustment loops of the system ensuring safety in all flight modes. Only the RAID leader sample in that year amounted to about 80 hours, including flights to the Championships of the CIS, Ukraine and the tests in Switzerland, which was held jointly with the German company Flight Design. In two years at all the “Alphas” pilots have flown more than 600 hours. But myself to search for optimal adjustments and other parameters of the glider had to sacrifice participation in all competitions and a rating of the athlete as for efficiency, the bulk of the work was carried out on Israeli paradromic, characterized by stability of weather conditions.
The following is a brief description of the paraglider “alpha 29” of 1997.
The dome-the wing has a Delta shape and contains 55 cells formed by the serial connection of the ribs with the elements of the upper and lower panels. When cutting the latter are used, respectively, the length of the backrest and trough of adjacent profiles, and the angles of the bevel at the front (a) and rear (R) edges are determined by the sweep angle of the dome. The seam is left of 12… 15 mm semi-circular air Intakes cut in the front part of the lower panels, with the exception of six terminal (three on each side), and amplified by the circuit Dacron strips.
Ribs are carriers of the wing profiles. As the distance from the longitudinal axis of the dome to its end parts of the profiles are changed in accordance with the pattern defined by the values of the relative coordinates of the maximum thickness of the Central and end profiles, which provides the aerodynamic twist of the dome. Thus, each rib has its own geometrical parameters, what separates the alpha from the plurality of foreign paragliders which use one base profile. The combination of aerodynamic twist with a deltoid shape ensures a compromise between easy handling, stability of the glider with good damping properties in conditions of high turbulence external flow, stiffness of the dome in flight and high aerodynamic characteristics. Uniform filling of the dome across the span at the expense of oval holes in the ribs. To the last did not lose strength, the hole feature in the field of conditional isosceles triangle formed by the segments, the lower edges of ribs and rays drawn from points a, b, C and d at an angle of approximately 45° to the base.
As materials for the manufacture of panels and ribs of the dome can be used for traditional paraglider fabric of foreign or domestic production — alpha is not very sensitive to such factors. However, be aware that more severe domestic materials complicate the starts to calm.
TABLE OF THE LENGTHS OF THE SLINGS OF PARAGLIDER “ALPHA-29” (DIMENSIONS ARE GIVEN IN CENTIMETERS)

Coherent system — wide type. Connect slings to the loops of the dome, sewn along each of the ribs for TRANS-a, b and C) and through one rib for series th and!*. They are made from malorastvorimyh cords containing the core and outer braiding. Short sling used for cords with a diameter of 1.1 …1.3 mm with tensile strength of 60…80 kgf, and for a long sling that connects to the straps the free ends (V-line), with a diameter of 1,7…2 mm with a tensile strength of
100…120 kgs. Adjustable loops of the system (selection of the lengths of the lines) is achieved by fine-tuning of the glider of the optimal values of the angle of the dome in all longitudinal sections, that characterizes the geometric twist of the wing. This step is the final finishing is usually the most lengthy and time consuming, but the table of rafter lengths will greatly facilitate it.
The toggles also branched type connect the rear edge of the dome with a loop (levantai), whereby the pilot controls the glider from the time of launch and before landing. To each brake are connected on one or two slings.
The loose ends made in 4-row design (a, b, C) with a sliding near). Optional on the front straps can be installed two blocks for “accelerator” or one unit on the strap! for the foot trimmer. Both of these additional devices provide an expanding range of flight speeds. The free ends are made of a nylon type tape LTCP width from 22 to 26 mm and a tensile strength of not less than 600 kgf.
One of the most important parameters of the glider for each pilot is the area of a dome or, more precisely, the specific load on the wing. Therefore, we present the developers of the information about the weight of the pilot with a tolerance of 15…30 kg for each size of the glider are not correct. In connection with this conclusion for “alpha” developed universal method of individual selection of square dome by varying the width of panels and the length of the chord at a constant number of cells, which eliminates the adjustments of the unit load through extremely inconvenient to use water ballasts.
The suspension system consists of base, shoulder, chest and foot straps. The first is sewn from a nylon avisenta in two or three layers. To give the system greater rigidity in its backrest and seat are made pockets in which to insert the plywood inserts. Straps made of tape LTK-44-1600 and provided with detachable buckles that can be adjusted in length. United with the base and among themselves (sakray run zigzag stitch thread No. ZK), they securely fix the pilot.
Amateur designers who wished to make a glider type “alpha” according to this publication, I recommend after Assembly and adjustment of the apparatus to hold the fly-a qualified pilot of the organization concerned.
O. ZAITSEV,
Feodosia