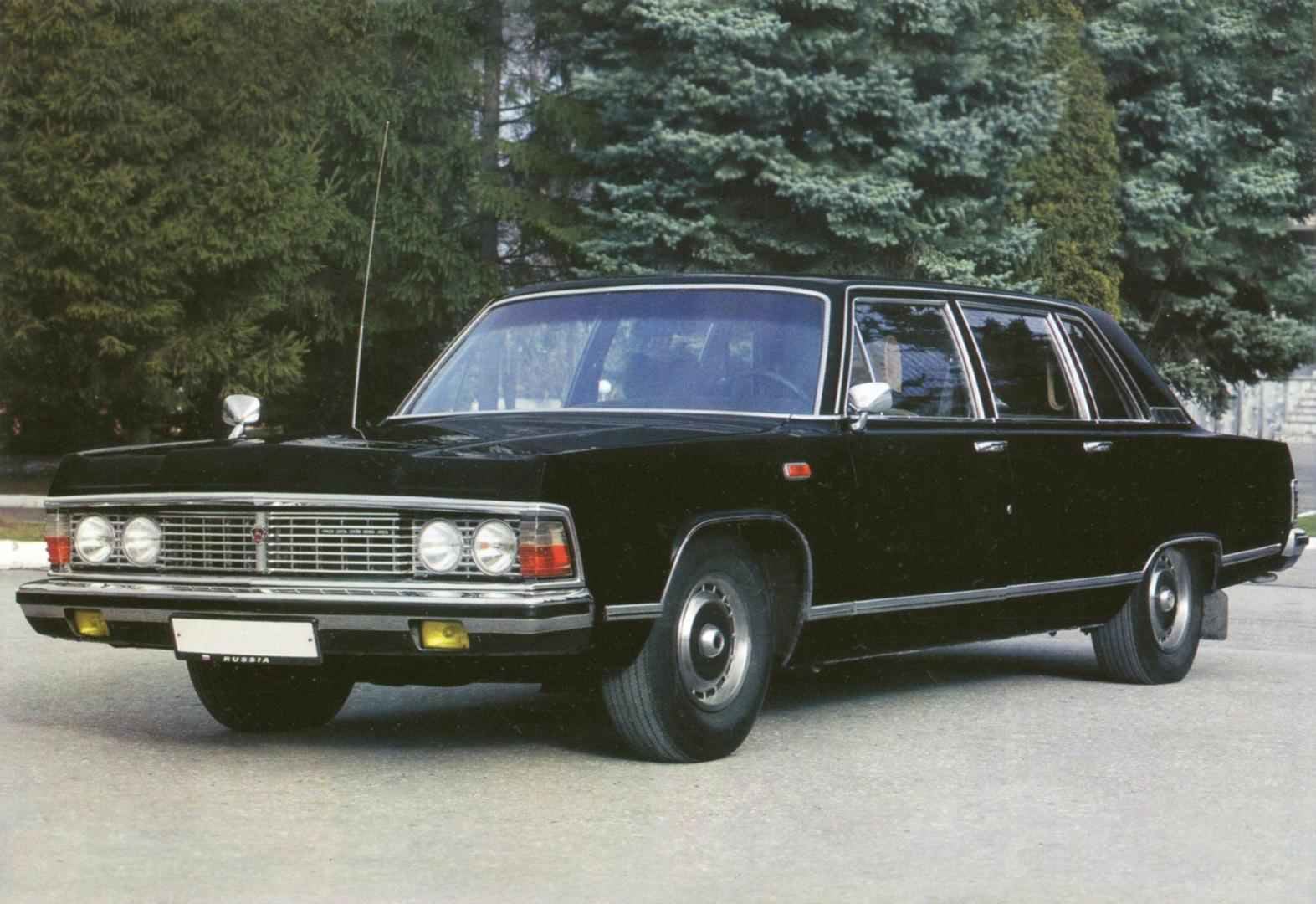 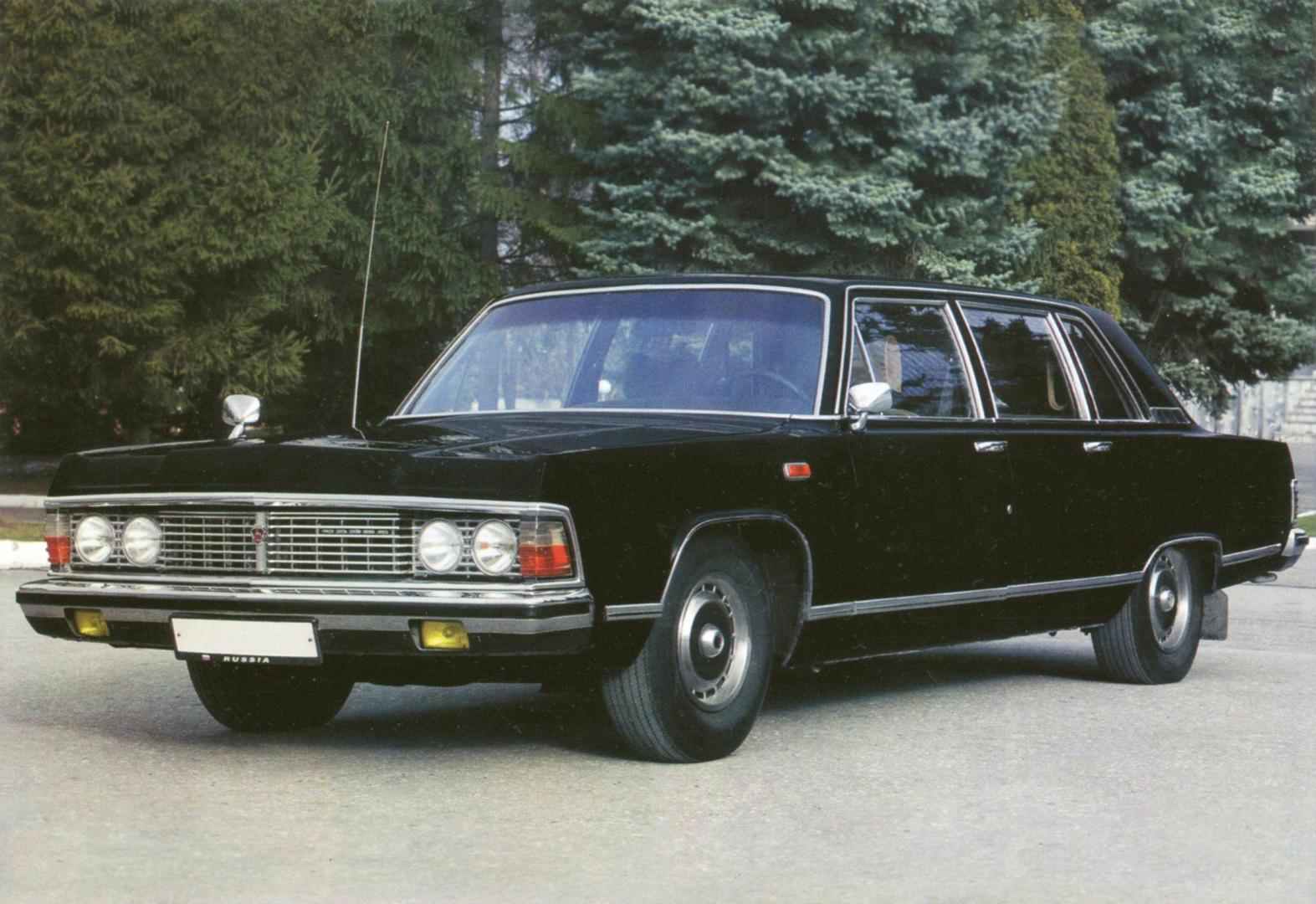 The once super popular in the narrow circles of the party-state nomenclature Executive car GAZ-13 “Chaika” in the 1960-ies began to lose its appeal. Pretentious machine with the design of the end 1940-x of years, full of airplane fins, chrome mouldings and fanciful lattices, it seemed yesterday the mighty car mods. Artists and designers of Gas tried to pimp the appearance of “the Seagull” (known, for example, modification of the GAZ-13 with four headlights, chicken wire grille and a flatter bumper), however, the initiative of the factory designers were not supported by “surface”.

The work on creation of a new, third account Executive high class car started on Gas only in 1967. The main objectives of designing steel complete upgrade of the exterior of the vehicle taking into account world tendencies of development of the design, increased comfort, improved dynamic performance, improved safety, reliability and durability, as well as reducing the complexity of maintenance. However, in fact, the GAZ-14 was still only a radically modernized version of the previous Executive car GAZ-13 “Chaika”.

In 1968 he was ready for a full-sized model of the new GAZ-14 made by designers in accordance with the trends of the global automotive fashion Executive cars of the time. Less than a year, as the project was approved by the development Commission, which was the permission to manufacture cars-prototypes.

The first prototypes were created on the basis of GAZ-13, but “hide” in the car with a low profile frame with high engine proved to be a challenge, so the chassis of the car had to design from scratch.

Design a running prototype of the second series were studied artist, designer Stanislav Volkov, a graduate of Hudojestvennogo school named after V. I. Mukhina. The prototype according to his design was created in 1971. The car has received a frame with increased by 200 mm wheelbase, and engine with reduced height. The first sample was followed by several prototypes with different appearance options. 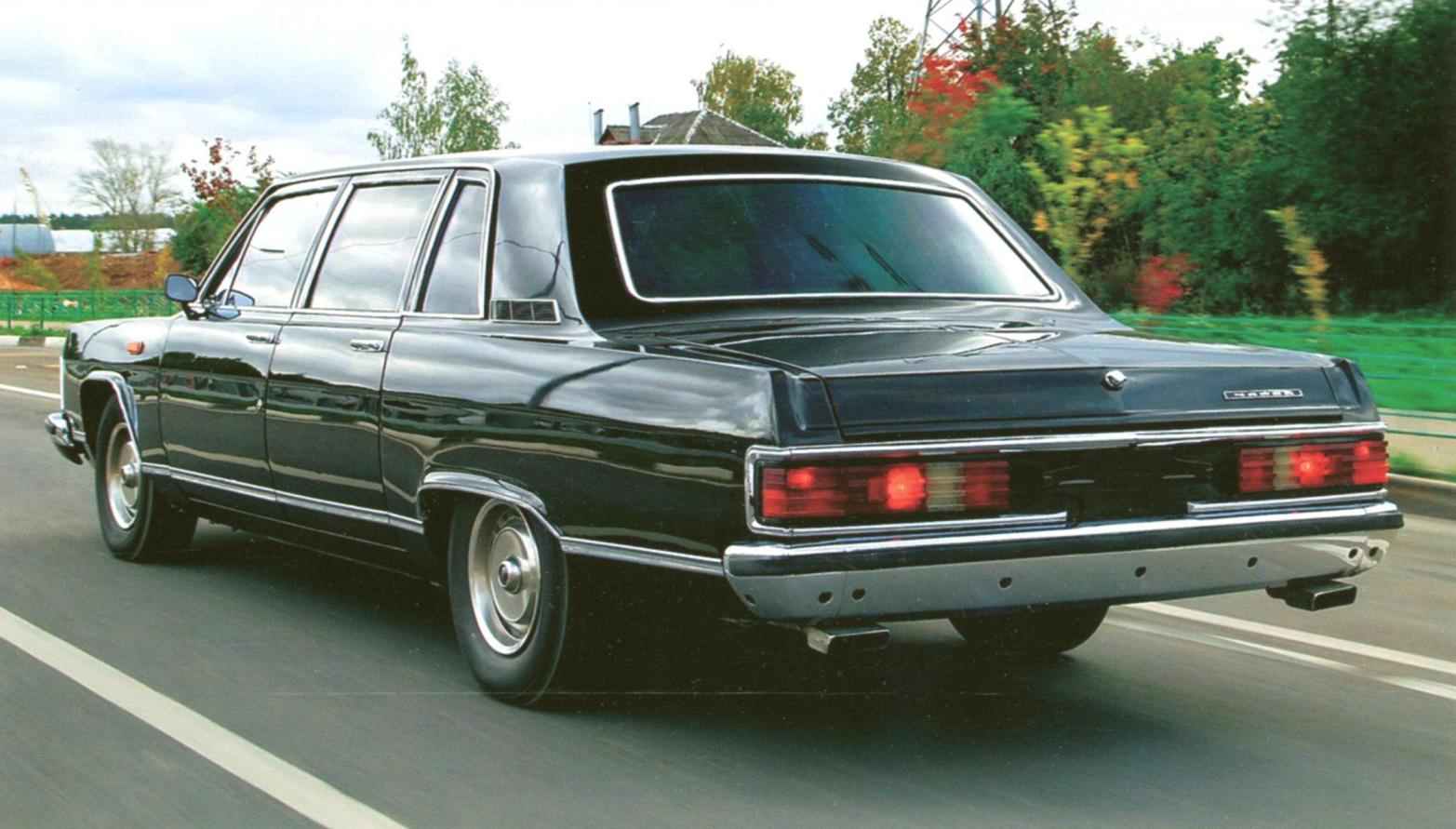 In 1975, pre-production machine was sent to a test run on the roads of the Caucasus and Crimea, and a year later on the same routes was held the state tests, which resulted in the recommendation of the car for serial production.

The first industrial batch of GAZ-14 was released in 1977.

Some experts avtostroy claim that one of them, painted in a cherry color, was collected ahead of schedule, the birthday of General Secretary of the CPSU Leonid Brezhnev.

The layout of the car is made by the classical scheme with frame front engine rear and leading wheels. The frame is almost the same as on the GAZ-13 – spinal, X-shaped. Wheelbase compared with the previous “Seagull”, was increased to 3450 mm, which allowed passengers to use the chairs straponjane the middle row. The height of the new car was reduced to 1525 mm, which led to lower its center of gravity, reducing drag and increasing stability at high speeds.

Eight-cylinder V-twin engine was slightly different from what was installed on GAZ-13 (I should add, these engines were in trucks and self-propelled guns produced by the Gas), but changing the valve timing, installing a new intake and exhaust manifolds and two carburetors instead of one allowed to raise the engine power from 195 to 220 HP as a result, several improved throttle response “the Seagull” and up to 175 km/h increased her maximum speed. Also claim that to reduce the height of the engine was increased slightly, the collapse of the cylinder.

The crankshaft equipped with a vibration damper, reducing vibration, and the tappets made hydraulic. The ignition system of the machine became electronic, which increased the reliability and stability of operation of the engine at high rpm.

It is worth mentioning that GAS-13 the driver’s seat and the front passenger was a single sofa, but the GAZ-14 it was already a separate seat bucket shape, the position of which can be adjusted for horizontal, height and tilt adjustment. However, “the Seagull” with a partition between the front and rear adjustment for the seat were minimal – often had to pick up a driver size of the driver’s seat.

Automatic transmission GAZ-14 was somewhat different from the AKP’s previous “Seagull” – it had different gear ratios in the stages of the planetary gear, and a completely different selector modes automatic: the previous button located on the instrument panel was replaced by a floor lever, almost the same as on modern cars with boxes-machines. Accordingly, the automatic transmission had three speeds forward and one for reversing. Transfer has been involved with two multi-plate clutch mechanisms, two band brakes and freewheels. 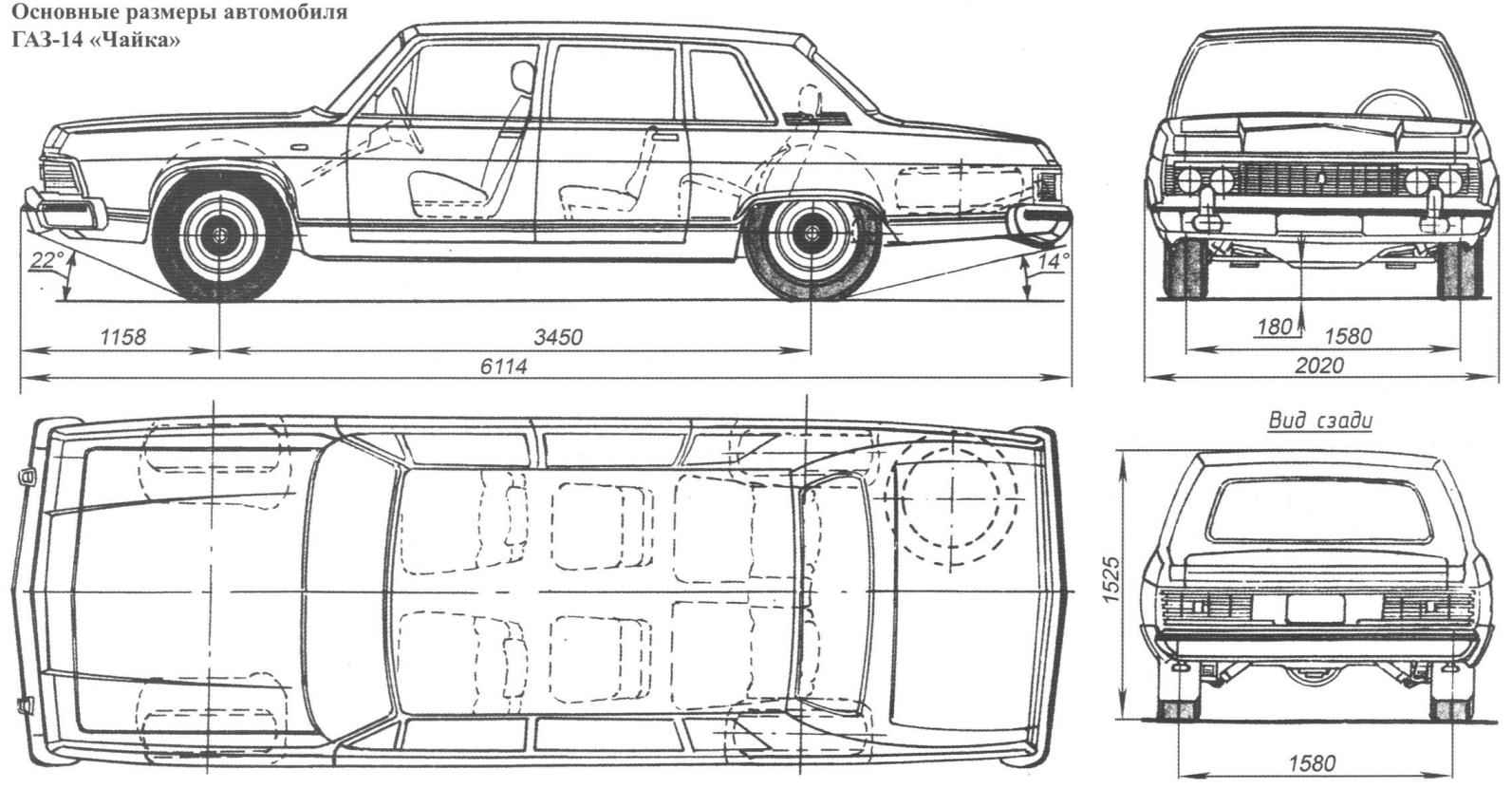 The principal dimensions of the GAZ-14 “Chaika” 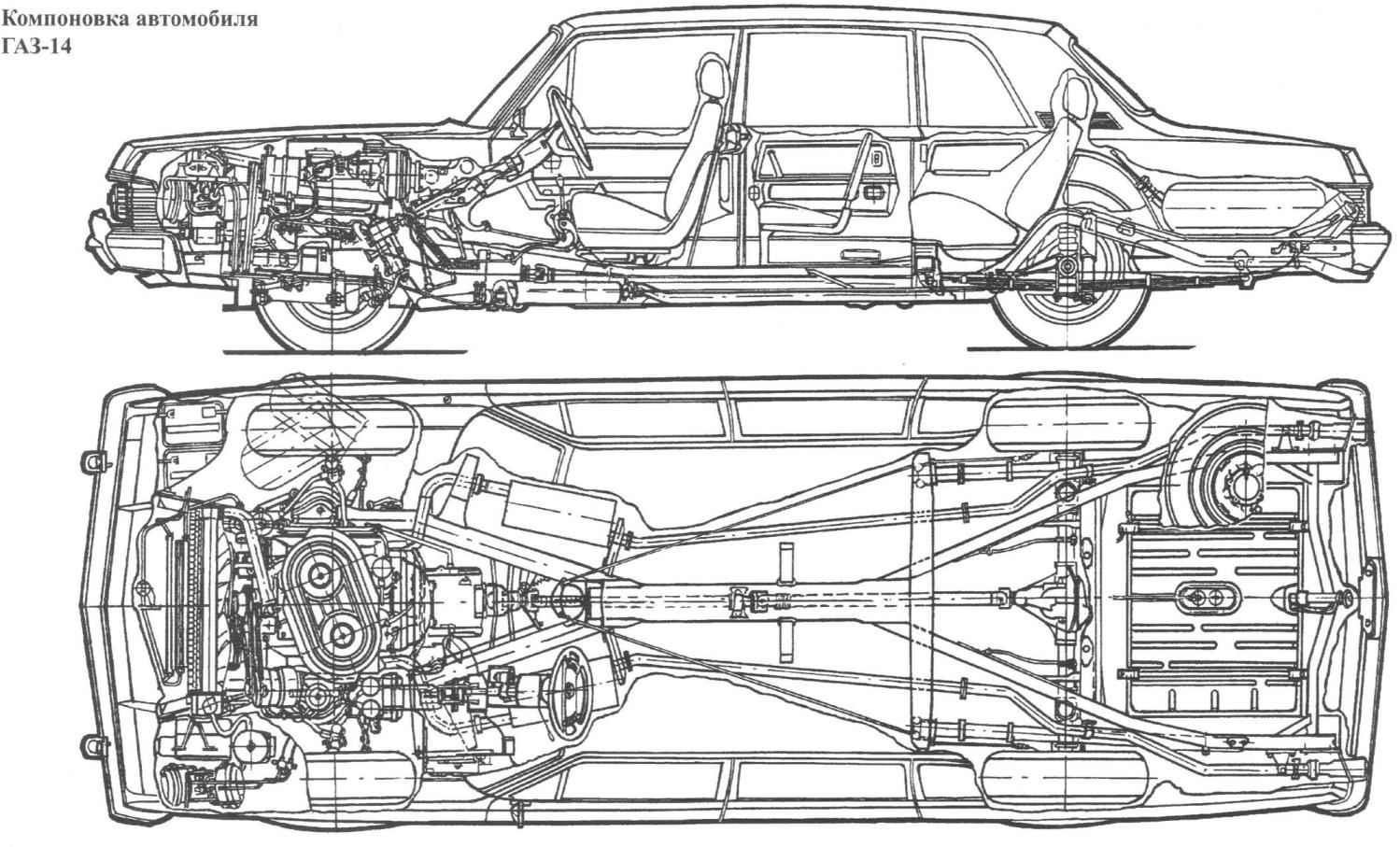 The layout of the car GAZ-14

Front suspension – independent, baskonia, spring, on wishbone, hydraulic double acting shock absorbers and stabilizer bar. In General terms, the suspension remained almost the same as on the GAZ-13, but the number of its components have been thoroughly modernized. In particular, the threaded pins and bushings were replaced with ball bearings and silent blocks (rubber mount).

The basis of the rear suspension – two longitudinal steel leaf springs. For damping oscillations of a used pair of telescopic shock absorbers bilateral action. Springs and rear axle of the machine connected by ladders through the rubber cushions that isolate the cabin from noise and vibrations.

GAZ-14 was equipped with working and Parking brakes. First, a hydraulic actuator, was mounted on all wheels of the car Parking using mechanical stopper drive only the rear wheels.

The braking device of the front wheels are disc, ventilated, rear – drum classic. The hydraulic brakes were dual circuit, with each of the contours was involved in two front and one rear wheel. Everything, every contour was equipped with its own hydrovac booster, and entire brake system as a whole Central vacuum booster. 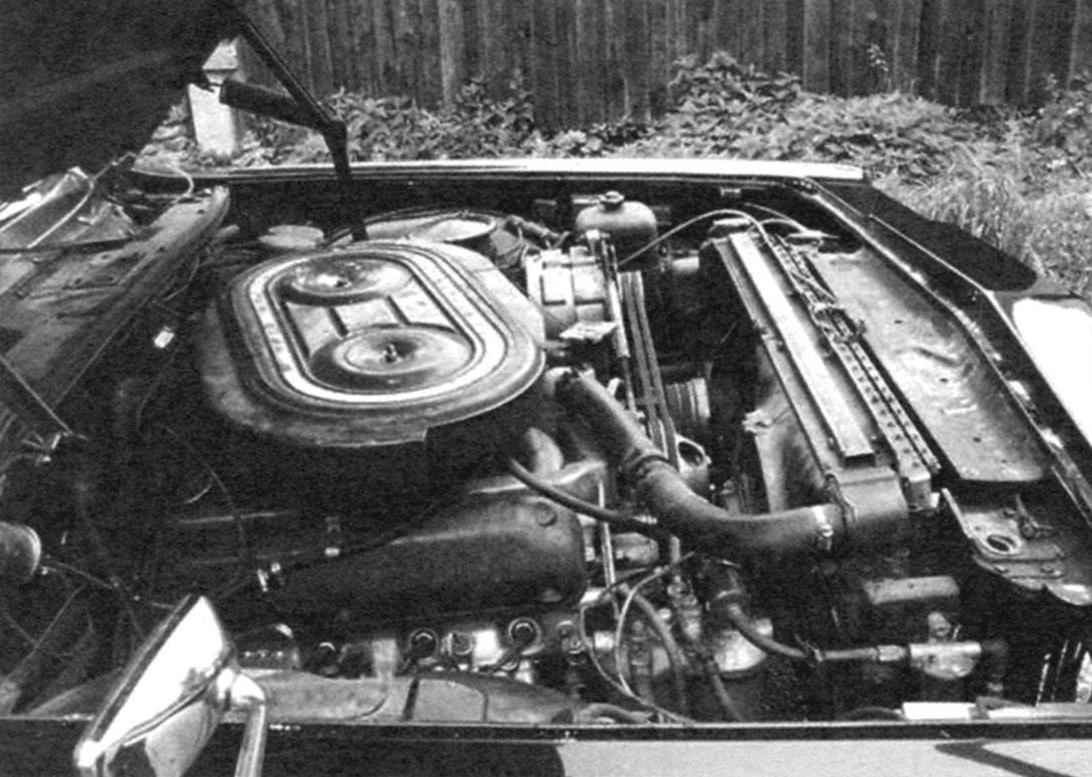 Hood space of the car GAZ-14 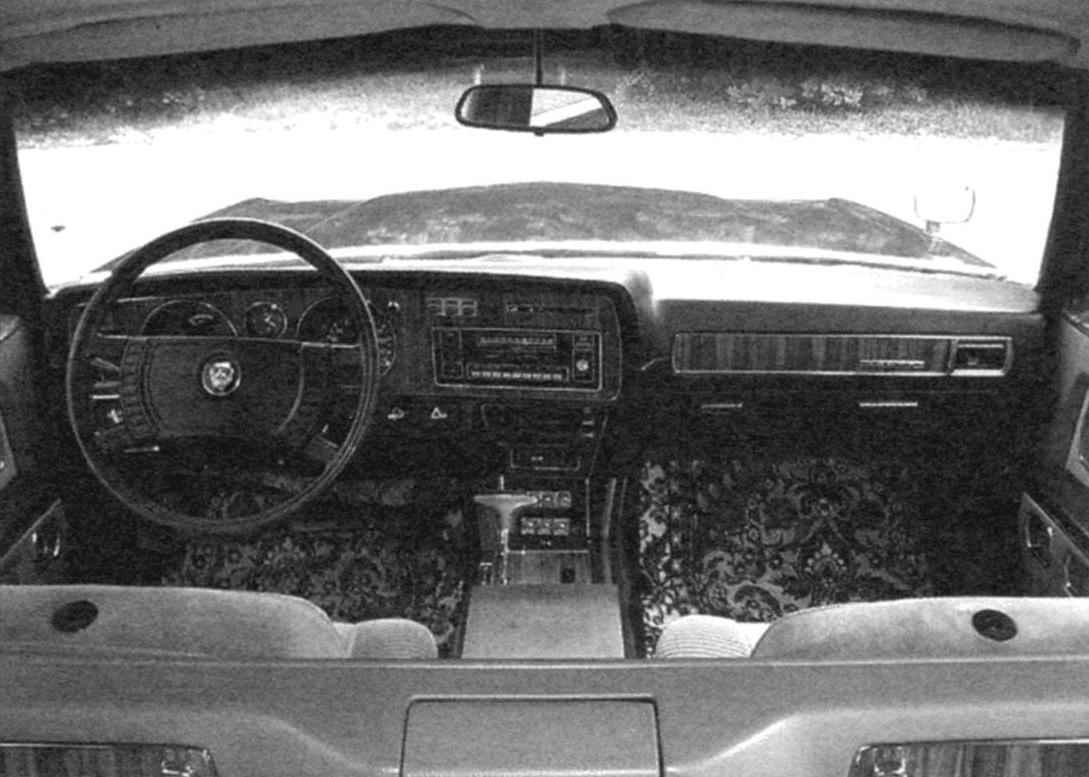 The front of the cabin GAZ-14

1 – the nozzles of system of ventilation and heating; 2 – switch headlight and turn signal; 3 – steering wheel 4 – instrument panel; 5 – the lever of the automatic transmission; 6 – the regulation of heating and ventilation; 7 – fuse; 8 – the glove box; 9 – ashtray and cigarette lighter; 10 – switch; 11 – accelerator pedal; 12 – battery disconnect switch battery; 13 – ignition switch and immobilizer; 14-brake pedal; 15-the handle of a drive of locks of a cowl; 16-control knob grille; 17 – the switch of a feed pump fluids, windshield washing fluid; 18 – pedal on the Park brake; 19 – the lever off the Parking brake 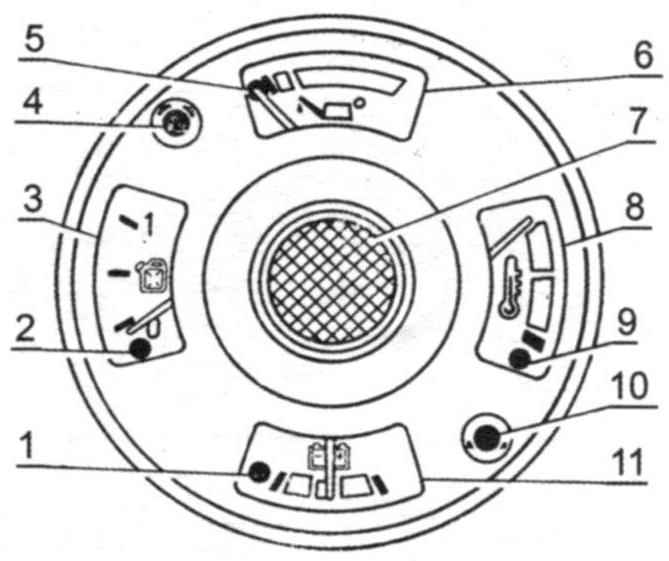 Unlike the GAZ-13, where the Parking brake stopper output shaft of the gearbox, GAZ-14 it using a small pedal under the left driver’s foot was on the brakes the rear wheels.

The steering of the car consisted of a gearbox, tie rods, and power steering. The presence of the latter considerably reduced the force on the steering wheel and significantly increases the safety and comfort control of the passenger machine total weight of over three tons.

Steering gearbox that includes a worm and globally dvuhgrivnevka movie, had an average ratio of 18.2.

The steering consisted of a vane pump, the distributor and the power cylinder, wherein the pump installed on the motor and was rotated double-strand V-belt drive from the pulley on the crankshaft of the engine. 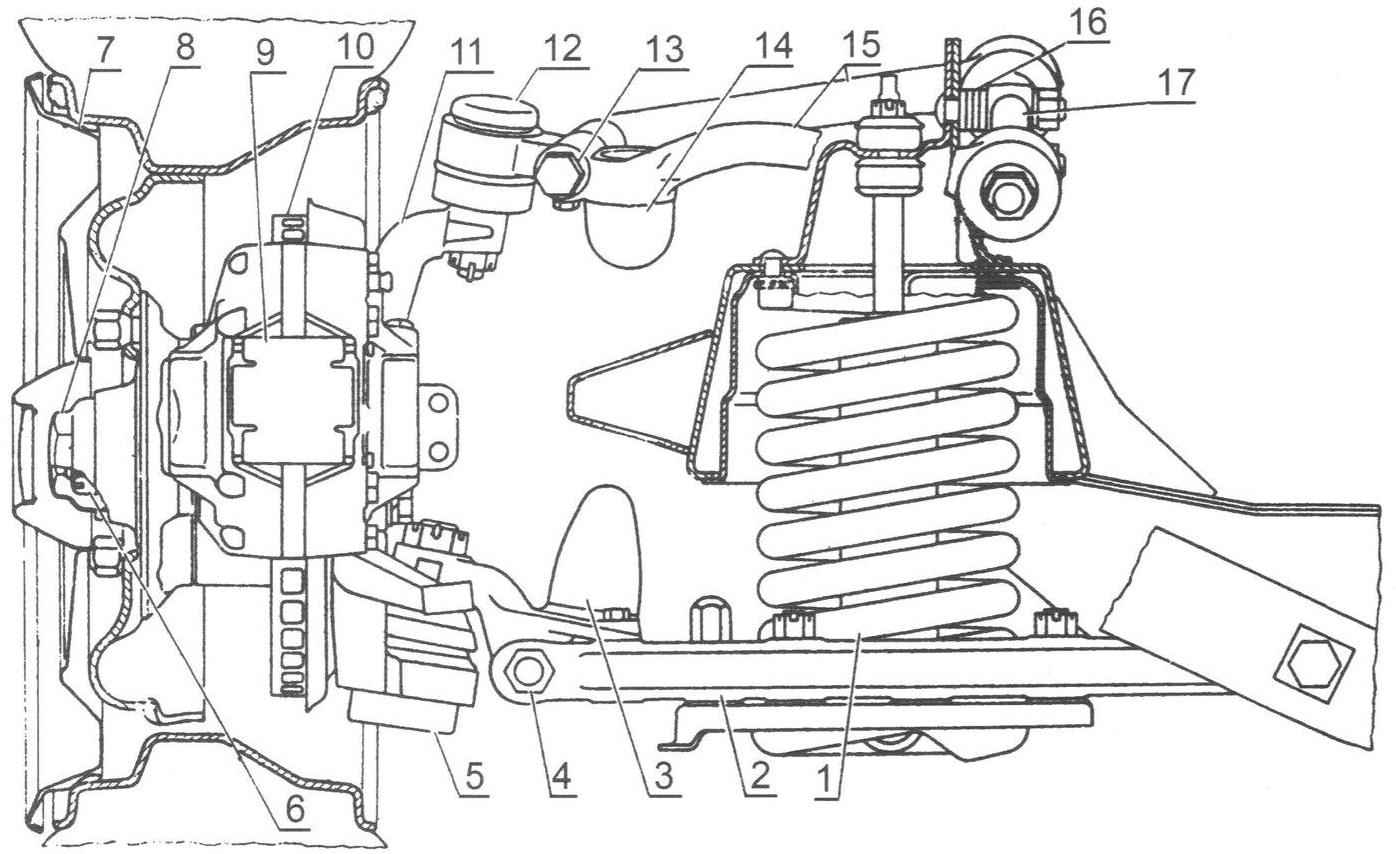 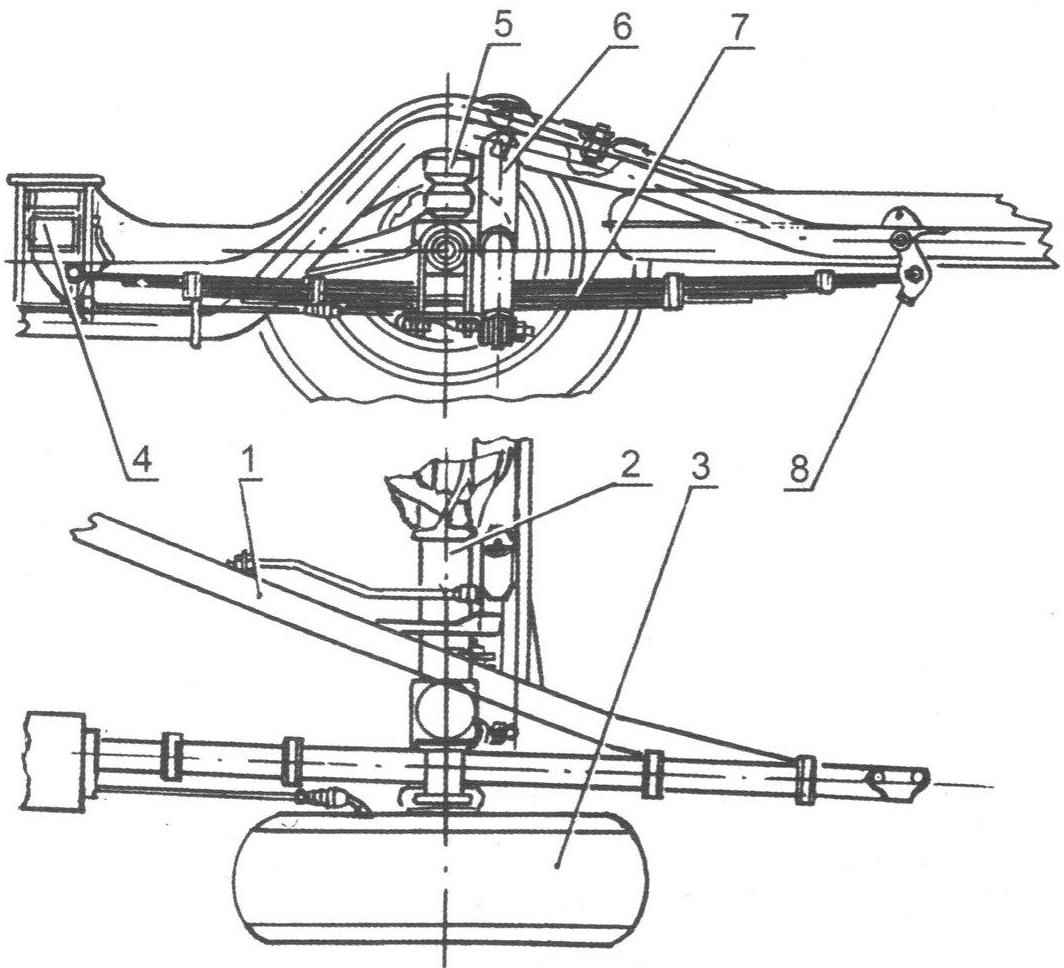 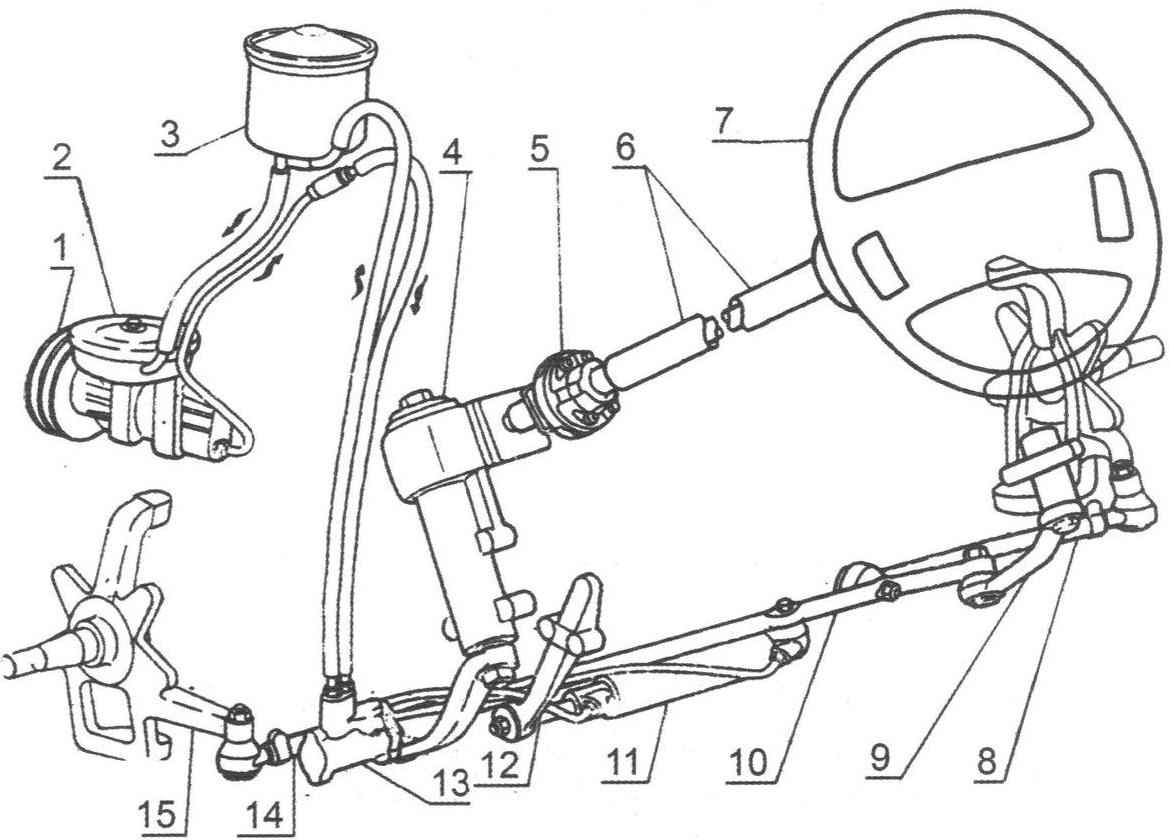 In contrast to the predecessor, the vehicle GAZ-14 was part of a lot of devices that increase comfort and safety. So, the machine was equipped with an extensive system of heating and ventilation three (!) heaters, integrated air-conditioning, remote electric flaps, air intakes, power window, stereo radio “radio” with a cassette console “Wilma” and the remote control in the left rear armrest of the sofa.

By the means of passive security was of the power zone in the doorway, the soft padding of the inner part of the cabin, rear fog lights, and seldom at that time encountered three-point seatbelts. In addition, we should mention faraocatharine, the system locks the doors from the driver’s seat. Rear view mirror in “the Seagull” was only nutria-lonna, but it was a little, since most “seagulls” rear and rear side Windows Sartorialist. External driving mirror was installed on the machine only in the mid 1980-ies.

In conclusion, it should be noted that the car, launched the series in 1977 was quite modern, reflecting the stylistic trends of the world design. Installation of the GAZ-14 was carried out by the PAMS (production of cars in small series), a division of the Gorky automobile plant. 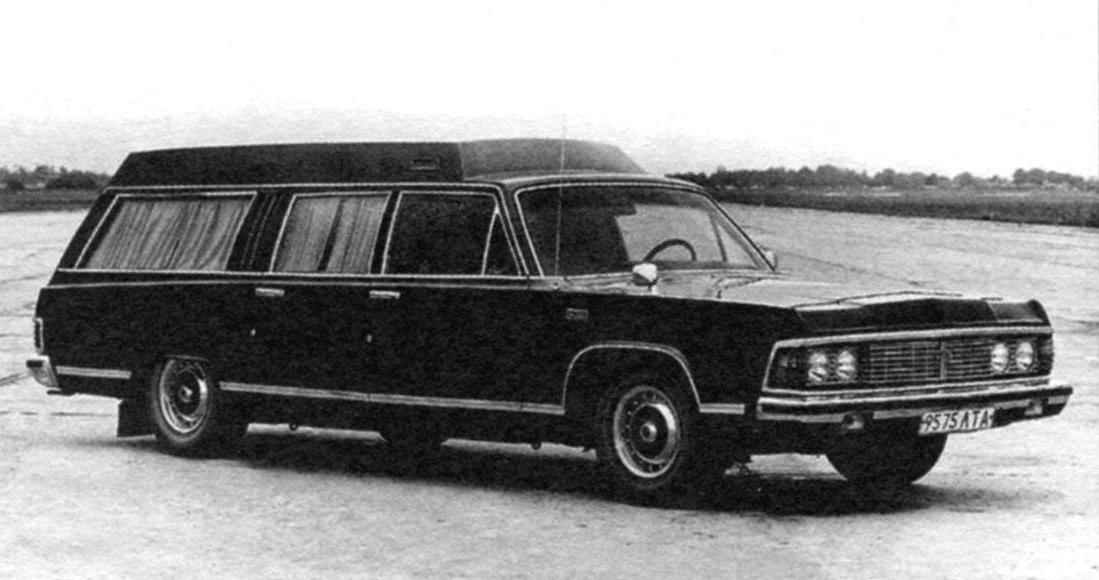 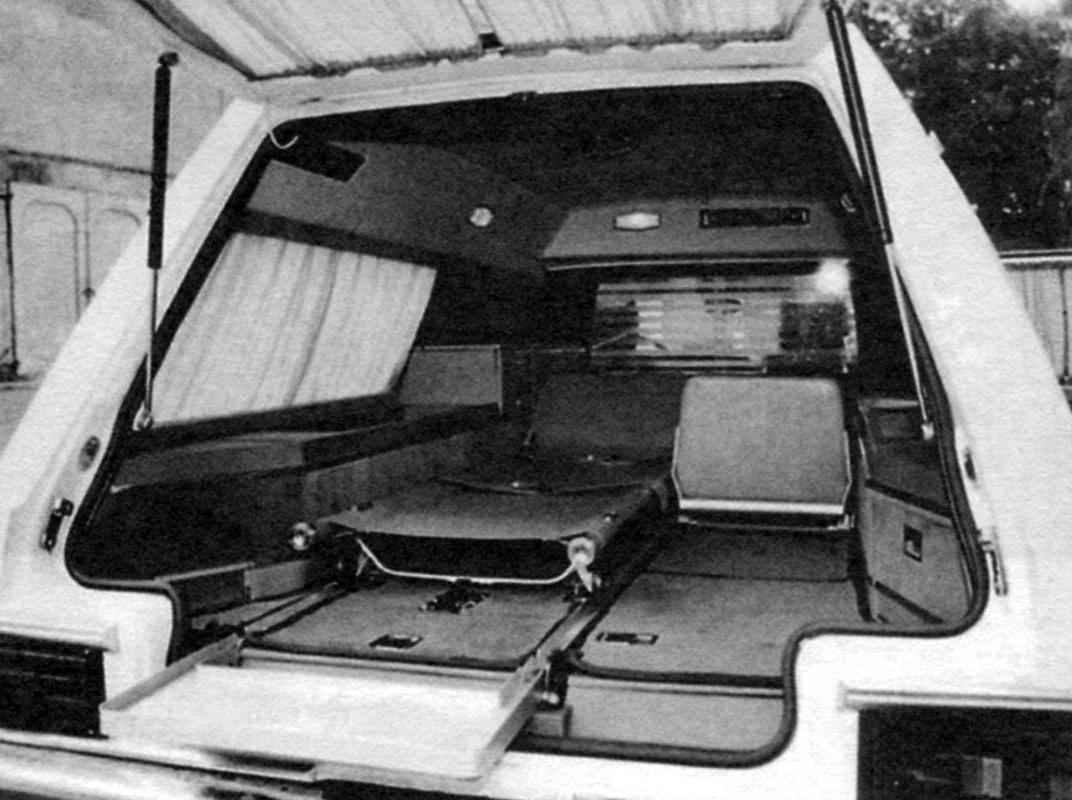 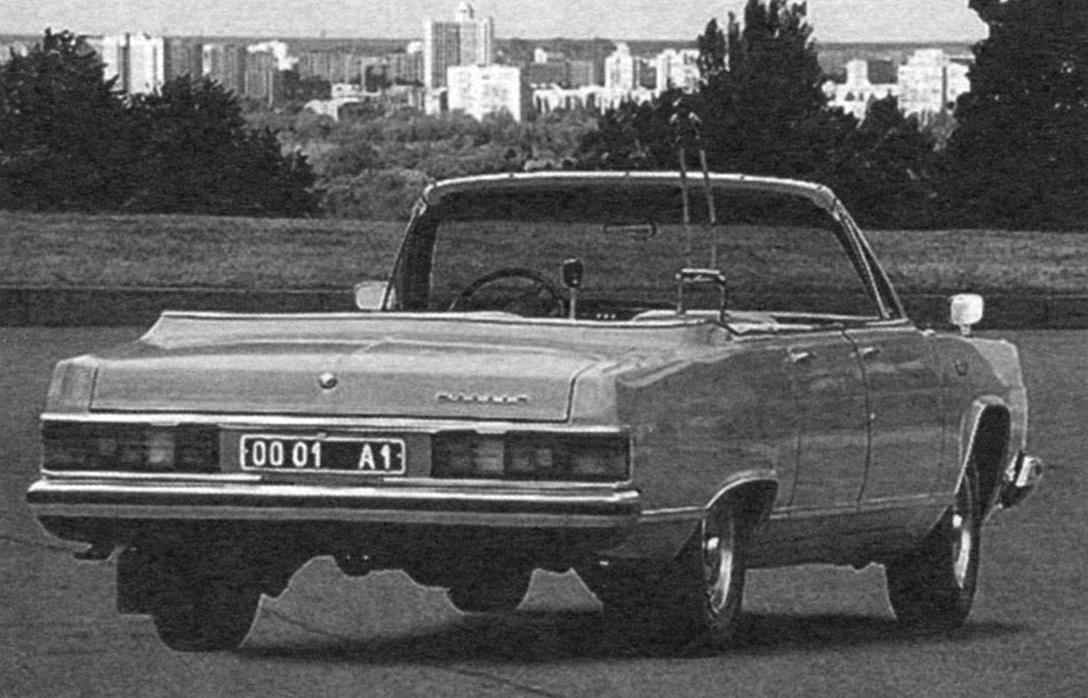 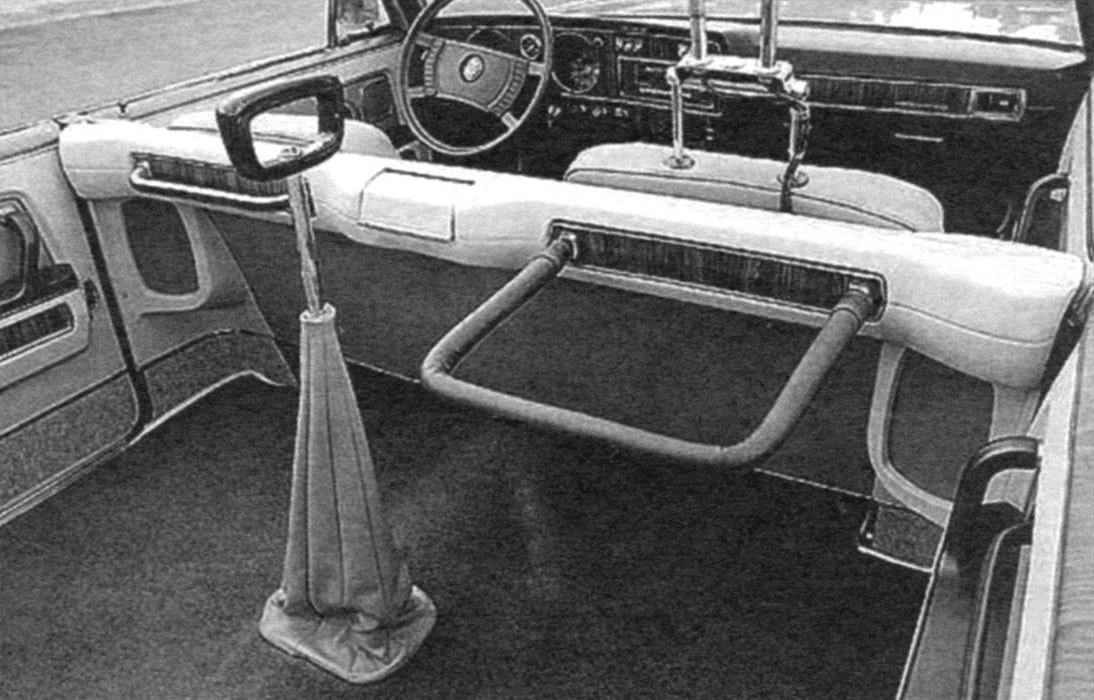 The GAZ-1405 “Chaika” with a body “Phaeton”, the commanders of the districts have attended military parades 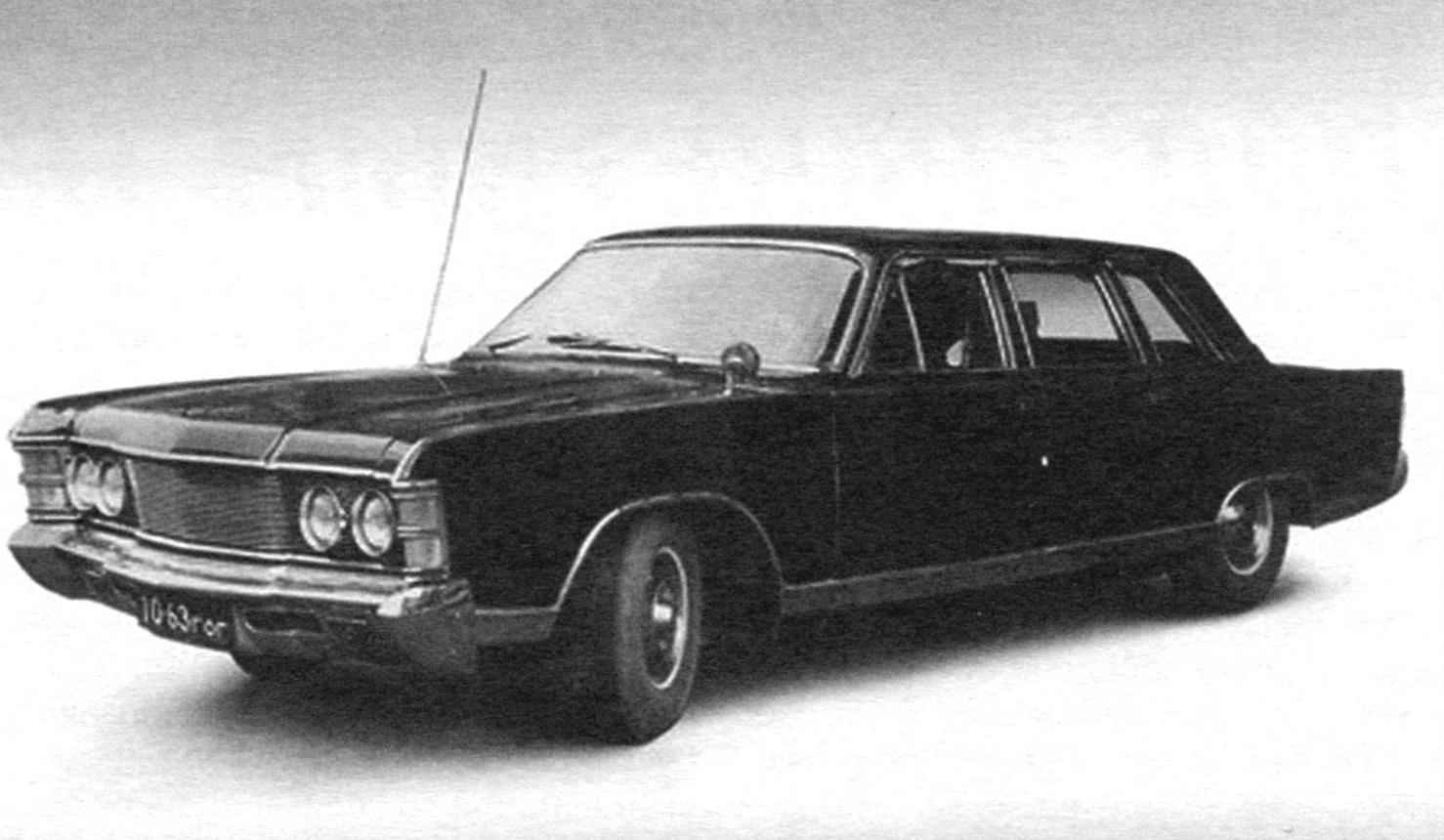 A failed attempt to modify the appearance of GAZ-14

Assembly of machines was carried out on the stocks manually, Brigadier by, with a capacity of about a hundred GAZ-14 per year. Those; ologia Assembly was very difficult, so, in the process of assemblers had several times to assemble and disassemble each car. Machines were painted by fifteen layers of black nitroemali with intermediate sanding layers, then passed acceptance tests on different tracks with a length of hundreds of kilometers.

Production Executive car GAZ-14 “Chaika” continued until 1988, in less than 11 years, was released in 1120 of these machines several modifications.

The end of the last issue of “the Seagull” was very sad. In 1988, the country was violent “struggle against privileges”, in which the car was removed from production, and the latter are semi-assembled, the car was sent to scrap. Moreover, almost for the first time in the history of the Gas, at the same time were destroyed the working documentation on the vehicle, tooling, Assembly building and the body dies. Several years ago, the technical Council of OJSC “GAZ” discussed the idea of resuming production of the GAZ-14 – appearance of a representative vehicle could still have many years to conform to modern automotive fashion. However, without the destroyed documents and equipment recreation “Seagull” flew into such a lot of money, what about the profitability of its release could not be considered.