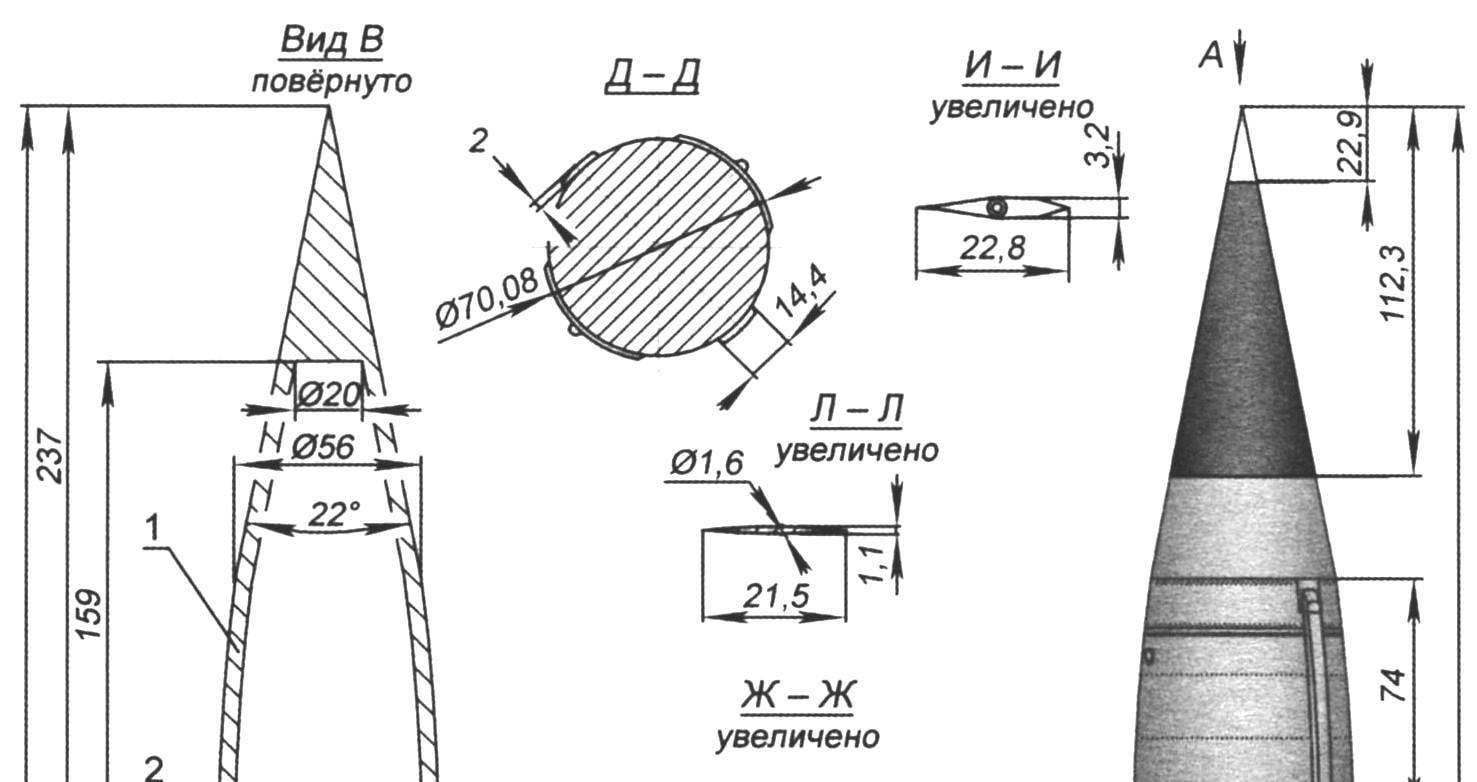 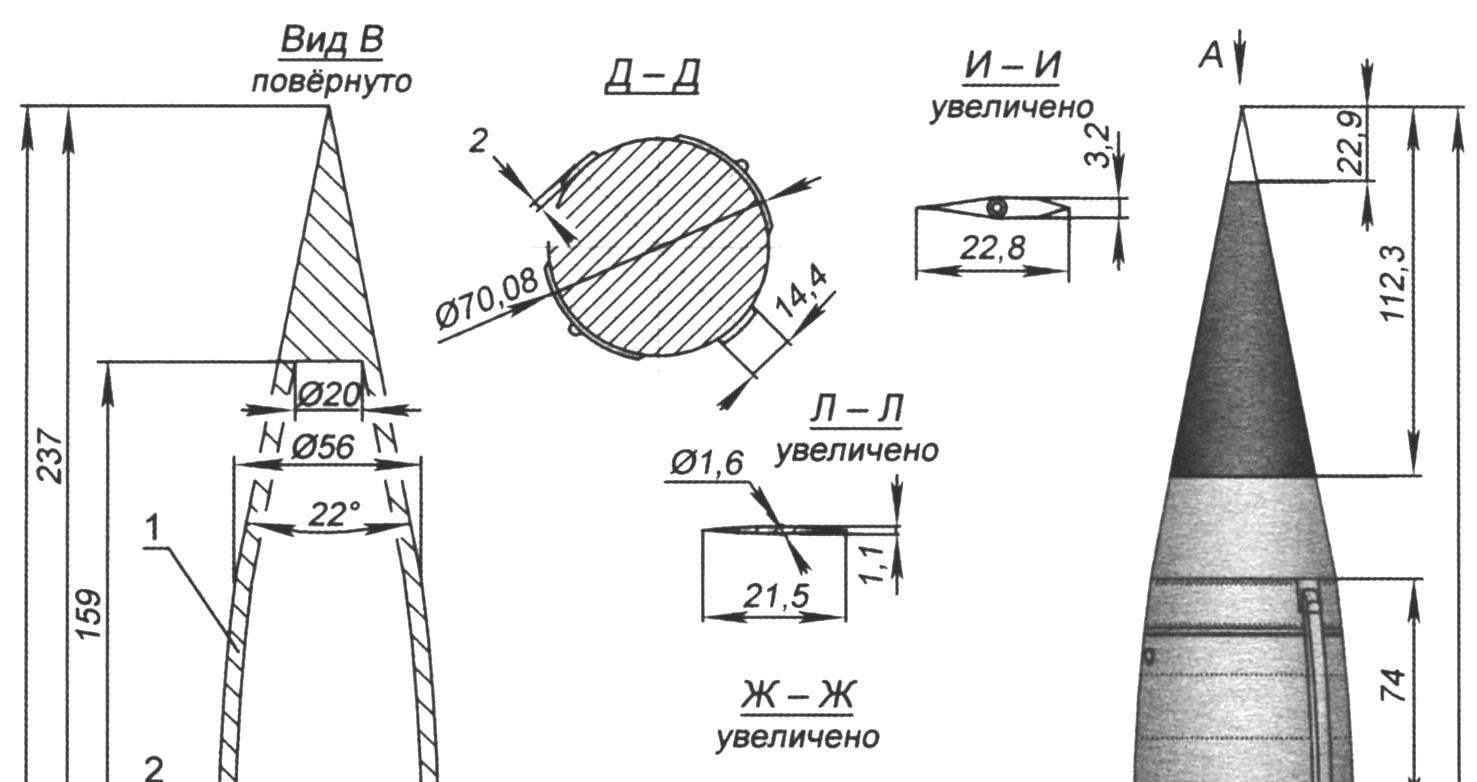 R-5M – the first in the world military equipment of the booster of the nuclear charge. Her starting weight was 28.6 tons, flight range is 1,200 km. Developed in 1954 – 1956, OKB-1 headed by S. P. Korolev on the basis of rocket R-5. In 1955, adopted in the USSR was adopted by the missile complex R-5, launch weight and range which were respectively 29 tons and 1200 km warhead Weight – about 1 ton. At start-up to a distance of 600 – 800 km, could be applied to two or four combat suspension with the use of a combined system, control the radio and Autonomous. Compared to previous products has significantly increased the accuracy of firing the missiles.
After many technical improvements of the R-5 has created a new set of R-5M. It was established LPRE RD-103 operating on ethanol and liquid oxygen, developed under the leadership of V. P. Glushko. Rocket R-5M was adopted in 1956 under the symbol 8К51.
In the future on the basis of the complex R-5M was developed by a large family of geophysical research missiles: R-5A, R-5B, R-5V and R-5ВАО, reaching heights of up to 500 km and carrying on-Board scientific instruments for space exploration.
The publication of this article is a tribute to the chronology of the establishment of the first domestic missile at OKB-1 headed by S. P. Korolev.
The proposed model is a copy, in my opinion, much easier to manufacture than P-1, R-2, R-2A. Model-a copy of the R-5M manufactured in the scale 1:25. Of bars needed to create, only need one for bonding of the housing. Its diameter is 65 mm, length about 600 mm.
Structurally, the model rocket R-5M are made of two elements.
This cylindrical body (length 556 mm) and a head piece (length: -270 mm), consisting of cone (fairing) and “alive”. Such a model can be recommended for the manufacture of “rocket scientists” who have some experience in design – members of the second year.
I must admit that the flight demonstrations on the model a bit. And if you cook it for competitions, the emphasis should be on manufacturing precision (number of copies per cell) and the quality of finish, colour and markings. In other words, to obtain the highest poster rating. And when flight tests are required to ensure a good flight, and, of course, to stock up on two parachutes for re-entry details.
Manufacturing technology-models R-5M is not much different from creating a flying miniature rockets described earlier.
Conventionally, a copy of the rocket can be divided into two parts: head (length 270 mm) and main body (length 556 mm). The procedure for fabrication of parts does not matter and is only dictated by the environment in which to create a model.
Head part – part. Its carved out of basswood on a lathe with two elements. The first fairing. He cone. Fake billet with a diameter of 58 – 60 mm and length of 150 – 155 mm is clamped in the Chuck of the lathe and process from the inside. First, to a depth of 100 – 110 mm do drill with a diameter of 12-14 mm, the length 50 – 60 mm drill bit diameter 24 – 25 mm. After this long cutter chiseled inside the resulting drilling after turning Residenzhotel 11°. 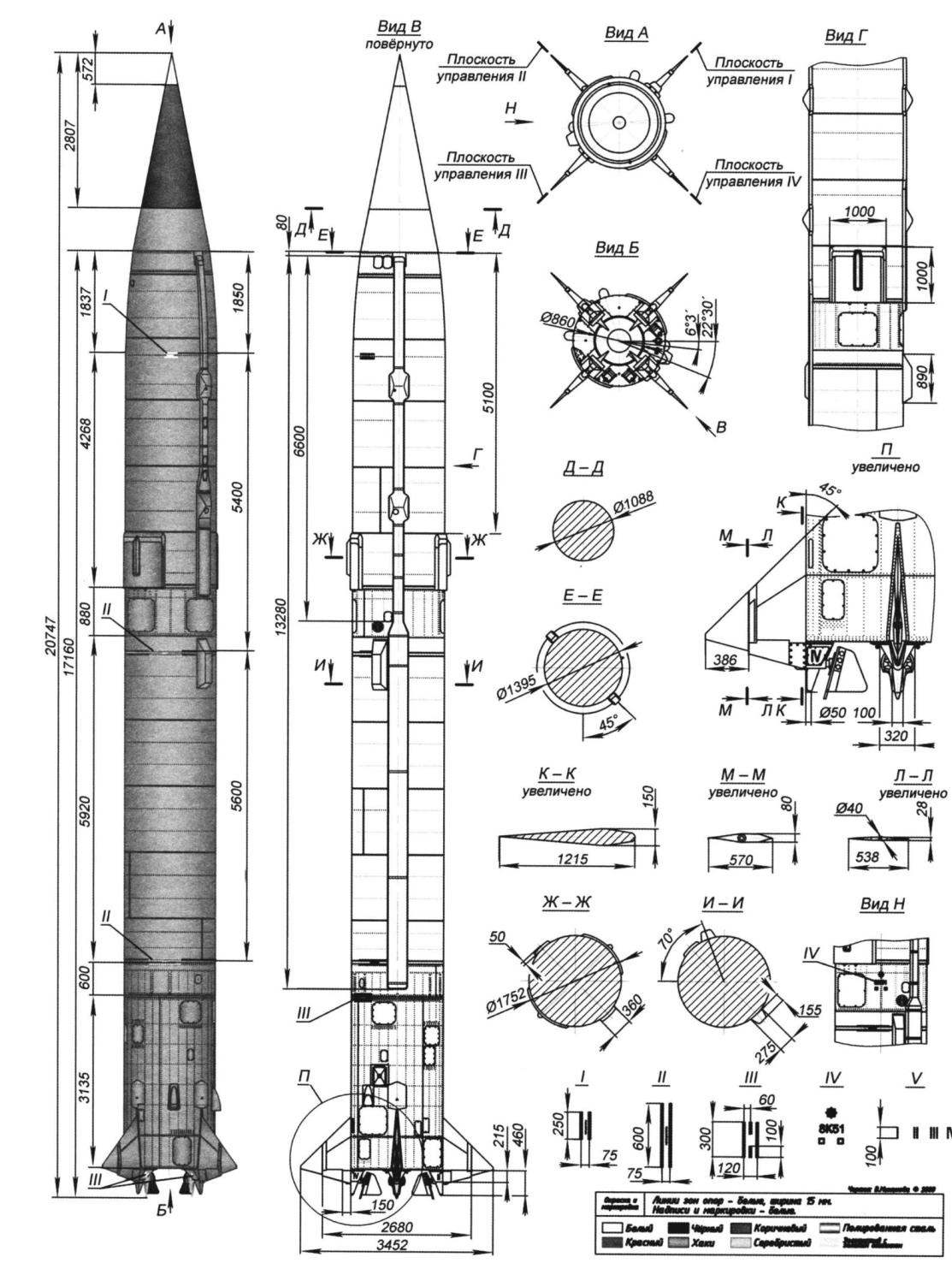 The first strategic rocket R-5M (index 8К51)
Thus, easy fairing, adjusting the thickness of its walls up to 4 – 5 mm. the Free end part of the butt and outer groove with a diameter of 52 mm and a width of 15 mm. She will need to connect to another element, which is called “alive”.
Removing the item received from the machine, is clamped in a Chuck workpiece other (preferably birch). Drill it through hole with a diameter of 15 to 20 mm and to a depth of 15-20 mm doing an internal bore with a diameter of 52 mm and “planted” in her fairing. To guarantee you in three places (around the circumference) to drip some PVA glue “Joiner”.
Giving to dry glued connection of workpieces outside. Residenzhotel need to be turned by 11° in the opposite direction from zero. Not bringing the outer diameter to the desired (0.5 mm), the resulting cone is removed from the holder and fix another workpiece diameter 69 – 70mm for the manufacture of the second element of the head part is “alive”.
First drill a hole with a diameter of 50 – 51 mm from the free end to a depth of 10 mm do boring up to diameter 52mm, adjusting it to the size of the wide edge of the head fairing. Then paste it into “alive”. When the compound has dried, treat the entire outer surface of the head portion. While avoiding excessive increase of the transverse feed of the cutter. With such a length (more than 250 mm) can “pull” the item from the holder.
Treating the fairing from the outside with a chisel, file and sandpaper, it is covered with two or three coats of nitrocellulose lacquer. At the distance of 253 mm from the top make the groove width of 20 mm and a diameter of 52 – 52,1 mm – for fixing fairing into the grommet of the housing when assembling the whole model. Inside face of the fixed plug (boss) with a loop.
The case of the model-copy of the R-5M glued two layers of drawing paper on the mandrel with a diameter of 65 mm. Allowing to dry the items received, process the suture and the housing with sandpaper and coated with a single layer of nitro lacquer. Thus is removed the pile of paper after treatment skin. Then mark pointed with a pencil the location of the welds and paste over the entire body of writing paper, causing pre-markings riveted joints with knurled – cog from hours in increments of 23 mm.

Model-a copy of the strategic rocket R-5M:
1 – fairing; 2 – “alive” fairing; 3 – the connecting plug; 4 – plug; 5 – loop for the suspension of a rescue system; 6 – parachute the bow; 7 – chute of the main body; 8 – frame; 9 – tube-ognevoj; 10 – housing; 11 – MRD; 12 – power frame; 13 – aerodynamic handlebars; 14 – the bearing; 15 – gas drive; 16 – stabilizer
Should be pasted strips of paper of a width not more than 100 – 120 mm, using PVA glue. Otherwise, there are folds and irregularities.
Giving to dry, treat the surface with fine emery paper and cover with two or three coats of nitrocellulose lacquer. Then glued the outer elements, pads connectors, boxes, covers, hatches, antennas, etc. welds imitate sticker thin strips of paper (0.5 – 0.7 mm) or thread previously covering their nitrocream.
Then clamp the mandrel (case is on it) in the lathe Chuck and at low speed butt casing to your desired length – 556 mm. mandrel is Placed in a moist environment – for window (between frames) or over a bucket of water and remove the housing from the mandrel. It is tough and durable.
Due to the large length of the hull, and therefore a large internal volume, the model is applied to the tube-ognevoj. It allows you to fully use the boost regular lifting charge mrad. Ognevoj length 385 mm glue from the paper in a single layer on the mandrel with a diameter of 20 mm. it “dress” three frames of balsa (one of them-power, its thickness is 6.5 mm) and glued to the body, to the upper edge of the fastened coupling sleeve, carved from basswood, and glue the tether (strong thread) length 350 – 400 mm.
Stabilizers (four of them) are cut from the balsa plate thickness of 6 mm, making them the size of 2 – 3 mm less than required. Then three parties (in addition to more) around Linden slats, combined in a package and processed using a loop. Then as I looked into the package, each profile and paste over the blank writing paper, preliminary having markings riveted seams, and then coated with nitrocellulose lacquer (Amalita). After drying a big way stabilizers make concave (round file) and paste the pin from bamboo with a diameter of 2 mm and a length of 6 mm. Mark on the rear of the hull the attachment of the stabilizers and attach them to the epoxy resin. Guide rings arch steel wire with a diameter of 0.8 mm, which is glue on the resin to the enclosure so that they are not conspicuous in a place of fastening of a box.
All external elements of the bottom part (legs, gas rudders) are cut from basswood, painted and attached after Assembly and painting the entire model. Aerodynamic wheels make removable. They are cut from glass fiber plastic with thickness of 2 mm, profiles. In a big way glued studs (OVS 0.8 mm), they are inserted into the drilling stabilizer.
PREPARATION AND LAUNCH
After Assembly of the model it is sand and put a layer of dark paint. For this purpose, suitable Serebryanka. It shows a roughness. Then again treated with fine sandpaper and paint in the desired color. Mostly khaki. But the main guide in this case is the documentation.
Before running the model it is necessary to center – locate the position of the center of gravity (CG) and center of pressure (CSD). From theory it is known that the DH should always be ahead of the TSD. In this model, ready to fly, this distance is 25 to 30 mm. Position of the CG can be determined by placing the model on the line. Approximately defined and the CSD. Need of a homogeneous material to cut out the side outline of the model and find the CG of a plane figure. He will be TSD-models. In the specific case of the CG is at a distance of 280 mm from the top.
Flight weight copies of the R-5M is about 170 g. it Starts the engine 10-10-3 MRD, equipped with two parachutes (head part and body) with a diameter of 400 and 500 mm.
V. ROZHKOV