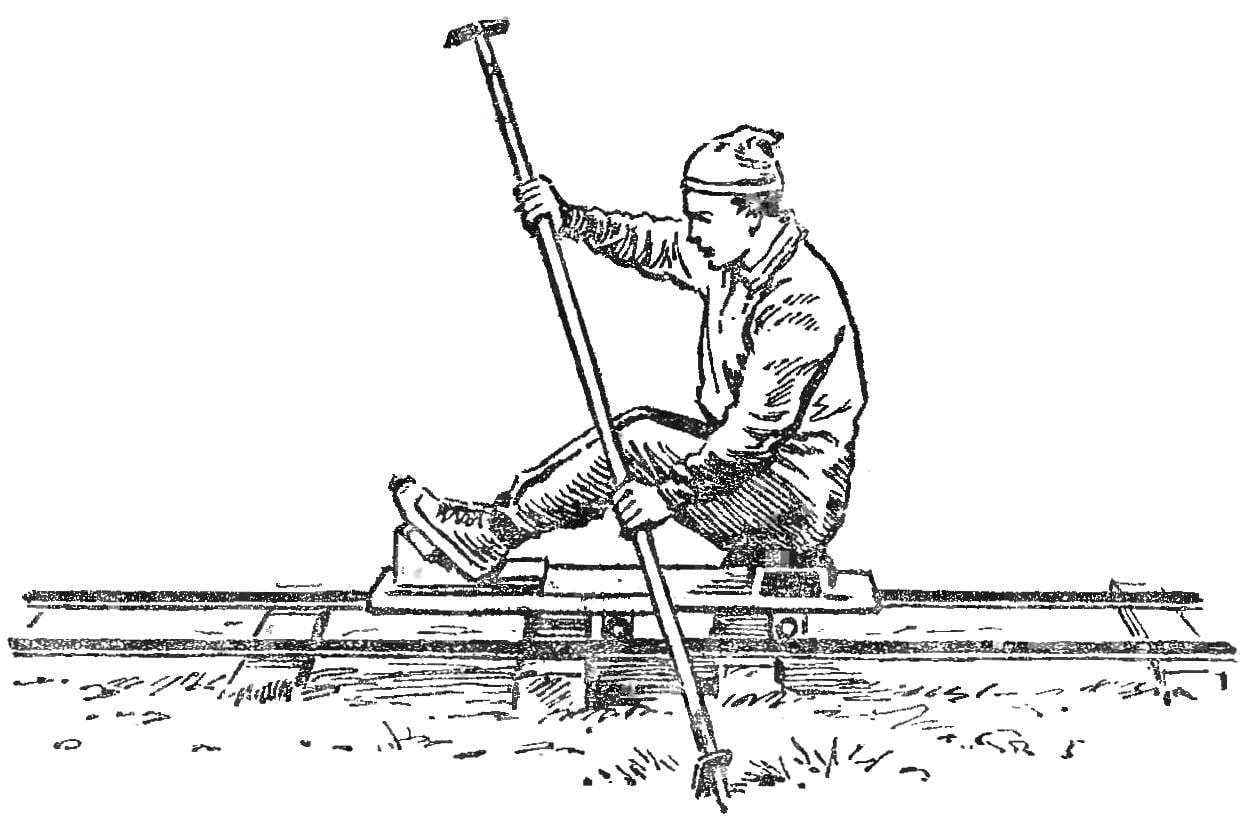 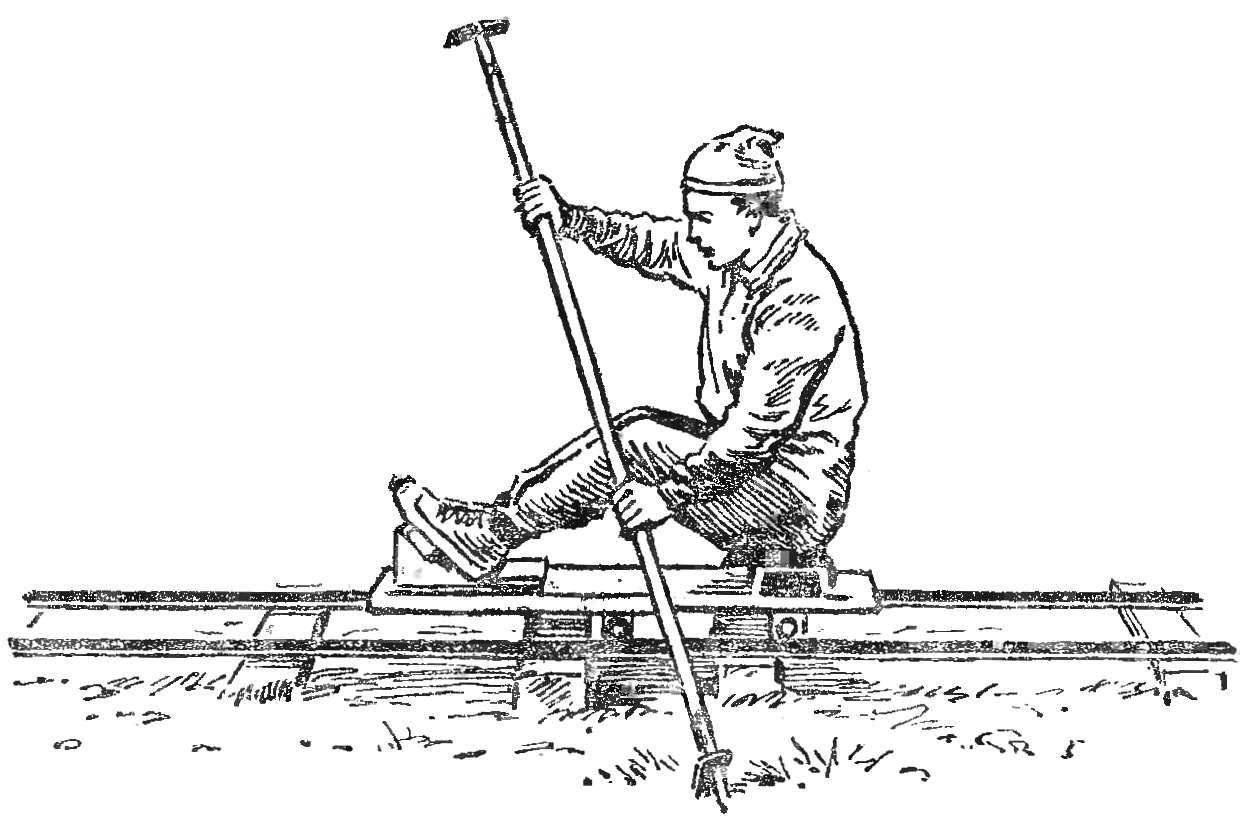 KAYAK FOR… ICE. Who has ever tried to sit in the kayak, he knows how difficult it is to manage. Coaches have to be pretty to work with young athletes before they themselves rush unstable boats on the water, And here in the midst of training winter comes… For three or four months of inactivity to completely lose the skills obtained in the summer. Winter classes are “dry” theory, crosses, etc. m, but all this will not replace the kayak itself.

Y. F. Zavgorodnia, graduated from two universities (the University and the Institute of physical education), liking the work as a coach in rowing. Master of sports of the USSR, teacher, he could not put up with the winter “downtime” kayakers, he wanted in whatever was to fill the gap.
Wondering, searching, making. And here came to light an unusual device — a winter kayak that can arrow to slide on the ice, on the asphalt. The device fully meets conditions reproducing the rowing on this boat.
The main part of a land paddle is a wooden beam, on top of it reinforced seat and foot rest. To the bottom of the via pads attached stationary rails or blades old skates (for asphalt coatings they can replace the bearings). Front runner is structurally rotatable. On the upper part of the axis pushed the tiller, turn the toes of the feet.
“Canoe the behavior of” the simulator gives the location of the runners on the same axis.
Winter kayak can do immediately to four people, it is necessary to install an additional seat, footrest and runners. The optimum height of the seats from the ice surface 100-150 mm.
In training the athlete sits on the seat, pushing his feet into the stirrups so that the end of the tiller was located between the toes of the feet So that the device “still standing” on the ice and slid on it, used a special device on the type of kayak paddle, the blade is replaced with sharp steel tips.

Another version of the winter “kayaks”.
Under the leadership zavgorodnego last summer, the children have made 10 lightweight winter kayak. The first camp was held in a rural location on the river Samara. Local residents were stunned, seeing how strange device rapidly race across the river ice.
The start was taken at a distance of 10 km. of the Young kayakers, only two years are familiar with rowing, covered this distance in 30 min. the Speed of self-made apparatus was much higher than the speed of this kayak.
Tests have shown to possess a winter kayak can be for some three sessions. Moving then to the big boat, the athlete feels much more confident. Who knows, maybe the appearance of this unusual device will open the first page in the new independent winter sport.
AND… SHE’S ON RAILS. Coach athletes-kayakers of the 15-th State bearing plant (the town of Volzhsk of the Volgograd region) Petr Medvedev also made for their Pets canoe on skates, so as not to interrupt training in the long winter months. But what are the disadvantages found skilled athlete: if the ice is too thin, the race is cracked, finally, if purgit everywhere and snow drifts, trainings have to forget. In addition, ice may not be.
Based on these considerations, P. Medvedev, with the assistance of factory workers designed, manufactured and tested a truly universal “kayak-substitute”. Its operation is not associated with the presence of water or ice and does not depend on the vagaries of the weather. And he made a canoe, which floats on a… rails.
Board is mounted on four bearings. Top mounted seat and footrest. Instead of oars pole with steel tips. The simulator is mounted on rails (metal corners 25X25), laid on sleepers (bricks). Sports narrow gauge railway has the shape of an ellipse, and the total length is approximately 150 m Ring road allows you to train from 5-6 athletes.
Kayak sleigh, without skill it does not go far. The axis with the bearings located so that if the athlete is sat incorrectly, not maintained the required balance, the Board itself will “sit” on the rails and will not move.
Boating conditions very close to natural, speed of the projectile of about 10 km in 45 min, the rate of “paddling” from 76 to 120 strokes per minute depending on the skill of the oarsman.
On the 15th GPP year-round use of the kayaks on the ice and on the rails. With the help of simple devices here in just one year managed to produce one of the candidate master, 23 rank sportsman, 20 athletes 2-th digit, 13 — third and 19 youth. Here you have handmade!