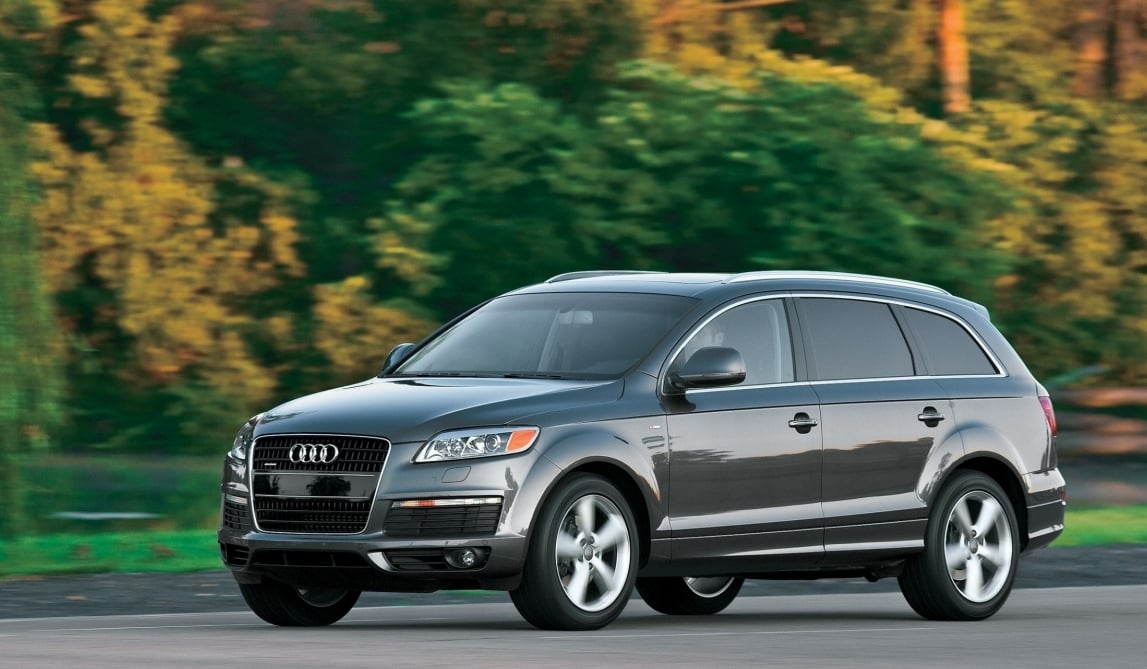 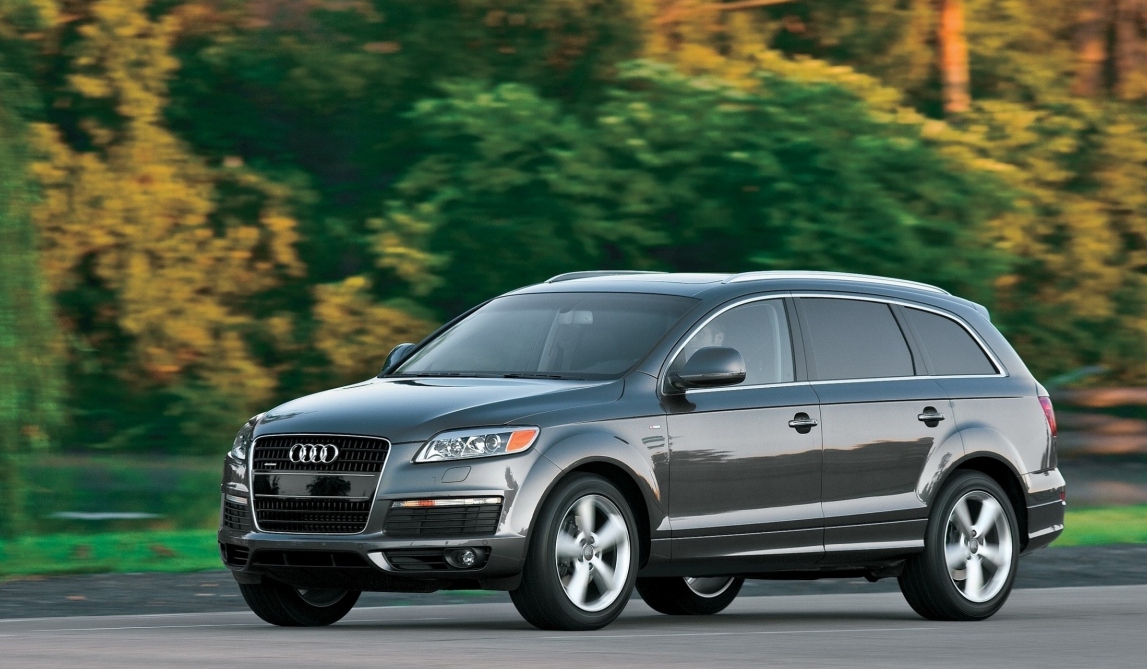 Audi Q7 is the largest SUV in Europe. In the catalog of a famous German car company AUDI is always possible to find a model for every taste, any size and a variety of prices — from crumbs A2 to “battleship” A8. The only. why not let this firm, — four wheel drive vehicles-crossovers Between those of its closest competitors — Mercedes, Opel, Porsche, Volkswagen and BMW — have long filled a yawning gap in two model series, manufacturing both true and “parquet” cars-SUVs.

In 2006 this car is a crossover, dubbed the Audi Q7 was released, finally, and AUDI As it turned out. marketers from Ingolstadt is not a coincidence waited, when the rest of the German car company mastered the production of such cars — their car has become one of the largest European cars of this class Do, the new seven-seat Q7 overall length — 5,086 m, while the VW Touareg it is 4755 m, and only the Mercedes R500 was 44 mm long.
This machine is built almost on the same platform as the VW Touareg and Porsche Sauipe — the only difference is that the Q7 has a large base (147 mm) and length (respectively, 331 and 306 mm) by the Way, increasing the base will significantly increase the comfort of the car. Argue that the level of equipment is not inferior to the flagship Q7 A8 the SUV also has a Keyless entry system in car four-zone climate control and a huge three-section glass roof. 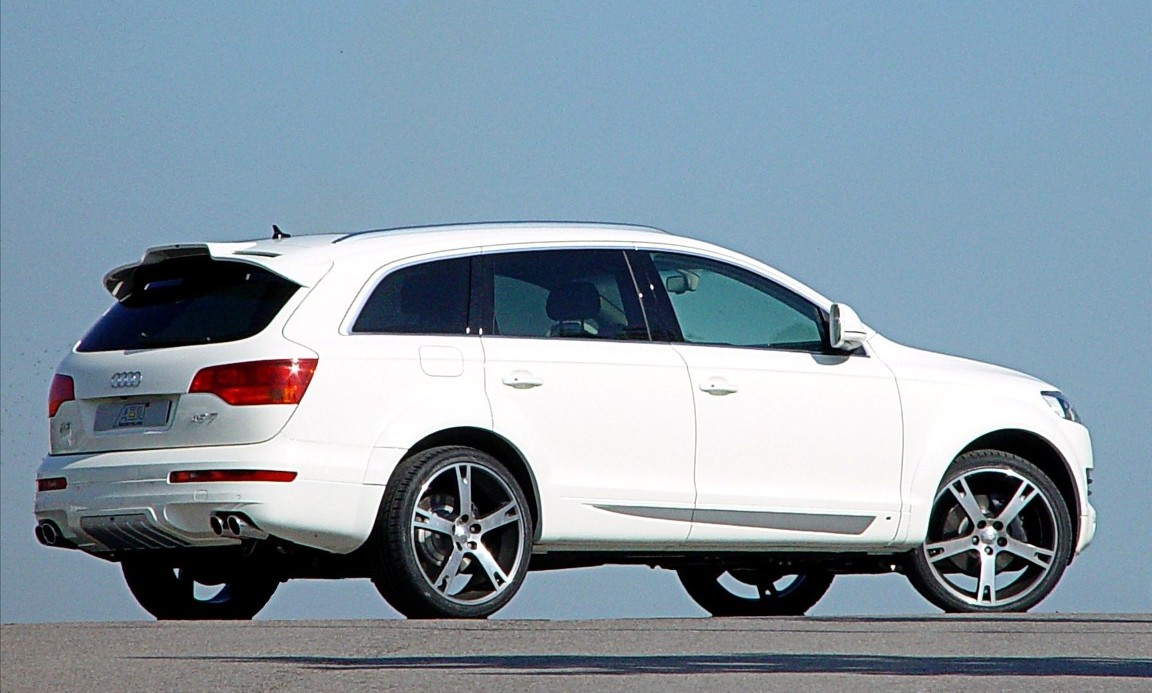 Crossover Audi Q7 2006 model
By the way, in the basic version of the Audi Q7 is a five-seat car — two seats of the third row are set for a fee In principle, they are intended for children, the growth of which is not more than 160 cm, however, according to the testers, my head hit the ceiling only those above 180 cm, so for people of average height seat on the third row is enough.
As for the second row passengers on it really at ease — if you wish you can sit in the chair almost like in the limo with his legs. By the way, the second row is not a solid three seater sofa, and two full seats with a reduced in the middle. They can move the sled back and forth and change the back angle.
In the basic version, Audi Q7 features dual-zone climate control as optional four-zone climate control with individual control unit and individual climate control for rear passengers.
In seven-seat version, the trunk capacity of the car is 0.33 m3, five-seater cars — already 0,775 m3, but when folded the second row seats Luggage capacity reaches an impressive size in 2,035 m3. For the rational distribution of Luggage, the company offers a quick fastener, which is particularly efficient at partial load of the trunk. The tailgate can be equipped with a programmed motor drive included with the main key FOB or buttons on the doors If the garage is not high enough, the driver needs only to pause, hand rising door, press the button on the key FOB and the electronic device will remember its position and a further door will not “try to break” the ceiling in the garage. 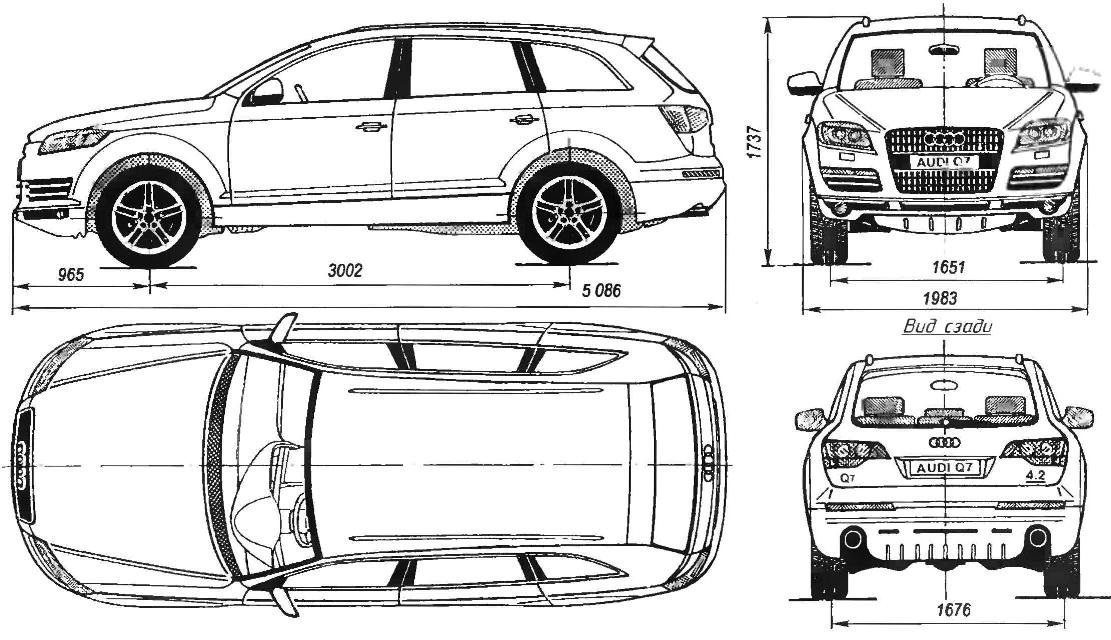 The geometric scheme of the car Audi Q7 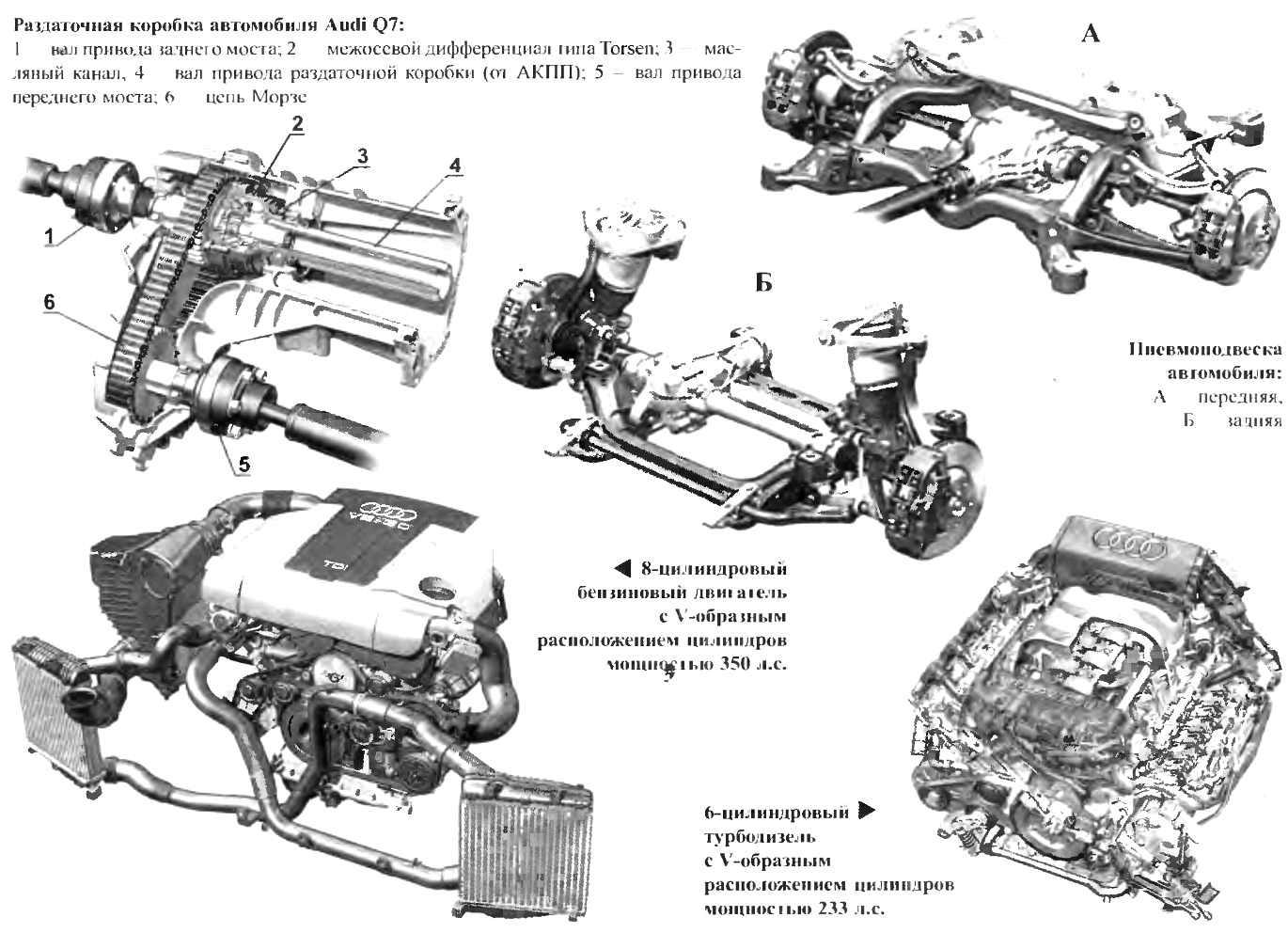 Accommodation of the driver and passengers in the Audi Q7:
1 – a five-seater; 2 – six-seat; 3 – a seven-seater 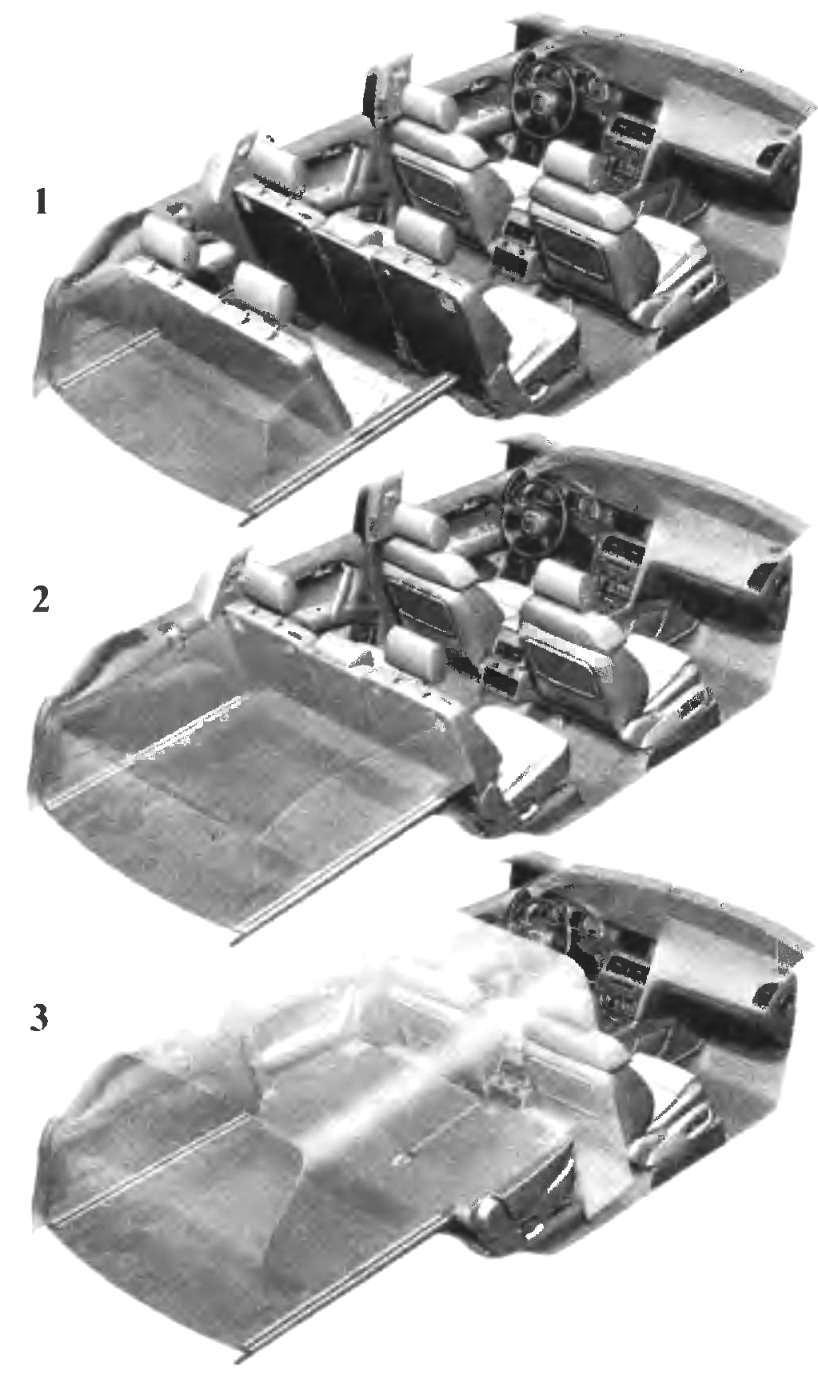 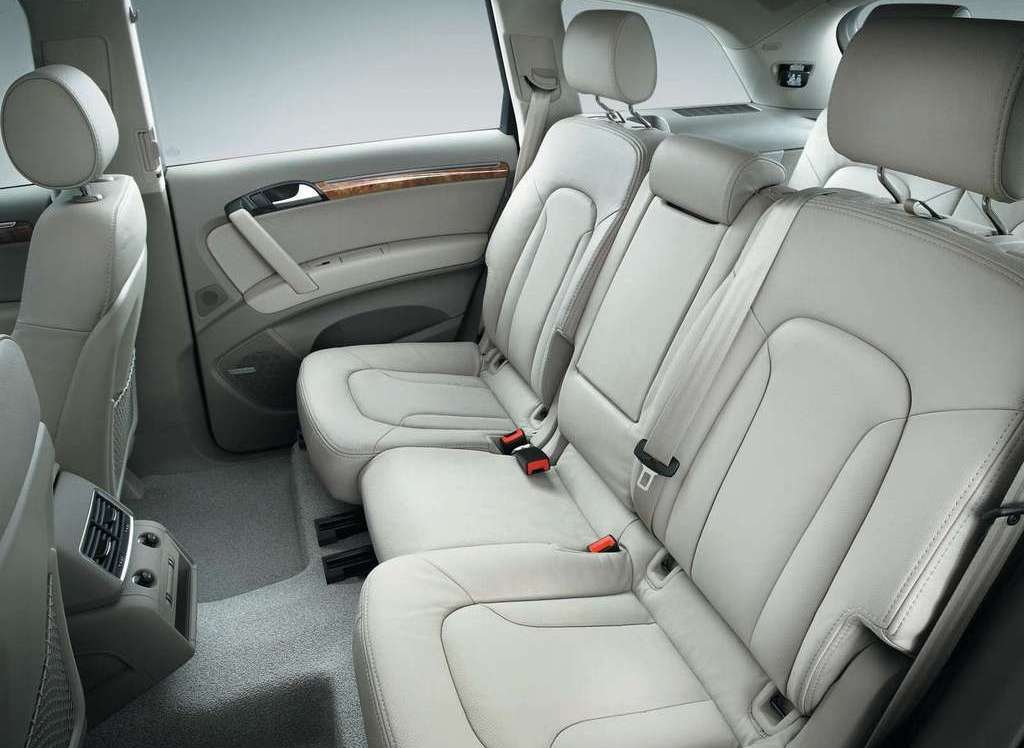 The interior of the rear (second row seats)
In the interior of the machine elements are widely used prestige cars Audi A6 and Audi A8 according to experts, the quality of materials, thoroughness of execution and ergonomics, the Q7 has overtaken almost all the cars of the same class.
The Audi Q7 is a vehicle with permanent all-wheel drive with single-stage transfer box and free cross-axle differentials under normal driving conditions the center differential type Torsen divides torque between the wheels front and rear axle at a ratio of 40:60. When slippage at the front wheels is transmitted to 65 percent of the time, and on rear — to 85 percent. In difficult road conditions the work enters the EDL system, which brakes a slipping wheel, simulating millennia limited-slip differentials. In addition, the machine is equipped with a control system that take effect during the descent of the car from the mountains, and a stability control system that in the event of danger of overturning selectively retarding the wheels preventing a dangerous side of the roll.
Speaking of wheels: the standard Audi Q7 is fitted with 18-inch alloy wheels with tires 235/60 R18. On ordering can be installed these tires and 19-or 20-inch wheels.
Audi Q7 is equipped with air suspension, which allows to vary the ground clearance from 150 to 240 mm Normal ground clearance is 180 mm, at a speed of from 120 to 160 km/h electronics reduce it to 165 mm — this improves the flow conditions in the vicinity of the machine and reduces fuel consumption. With a further increase in the speed of clearance is reduced by a further 15 mm When crossing small obstacles at low speeds mode is activated the Lift that increases ground clearance to a maximum of 240 mm is more than the national all-terrain vehicle UAZ-469
Front suspension do not differ from those, which are equipped with the VW Touareg SUV; the only difference is that the wishbones on the Q7 is not made of steel, aluminum alloy Steering car — like Servotronic, which varies the performance of the power steering depending on speed.
Rear suspension — specially designed for the original Q7. Its compact pneumococci to save space installed with a large angle of inclination. In the manufacture of the upper crossmember and the top lever used aluminum alloys. All of the elements of the rear suspension and gearbox mounted on a strong steel subframe.
A few words about the history of air suspension. It appeared relatively recently, but currently it is equipped with at least half a dozen of the most prestigious models of cars, including car firms AUDI, Volkswagen, Porsche, Lexus, Mercedes-Benz, Citroen and others.
The principle of operation of the suspension is not too complicated — element consists of two connected cameras — deformable container and a fixed volume compression, the volume of the deformable chamber decreases and the air from it through the spring loaded valve flows into the constant volume chamber. Thus pneumologist replaces the elastic element of the suspension (the spring, the spring or torsion), however, the damping function it can’t execute. 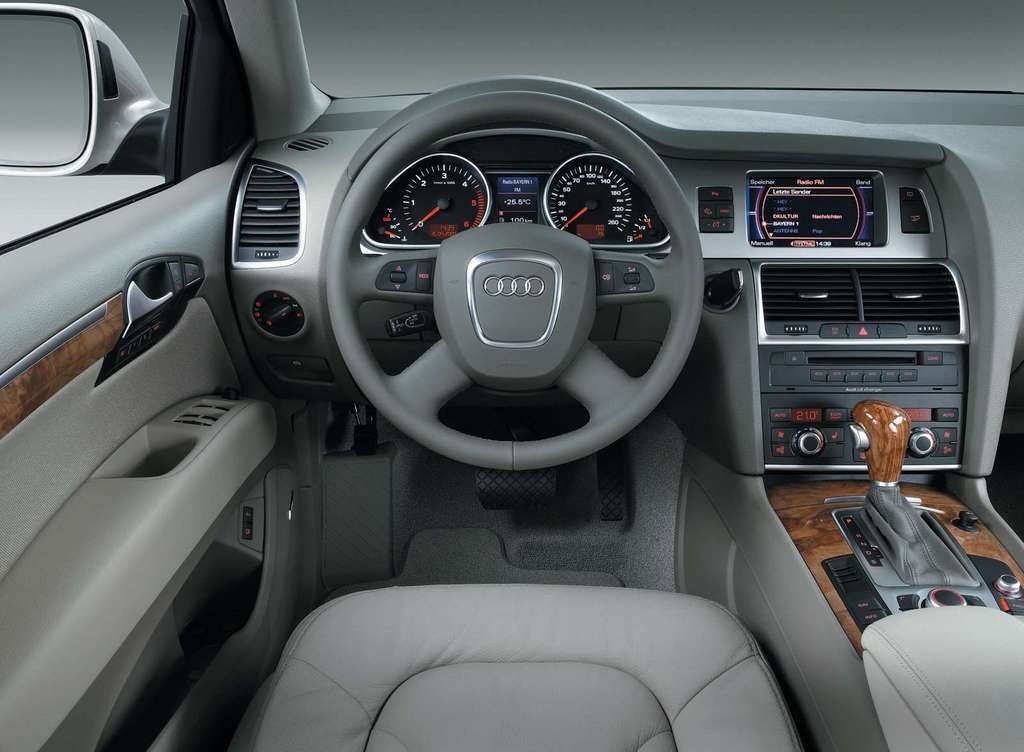 The interior of the front side of the vehicle 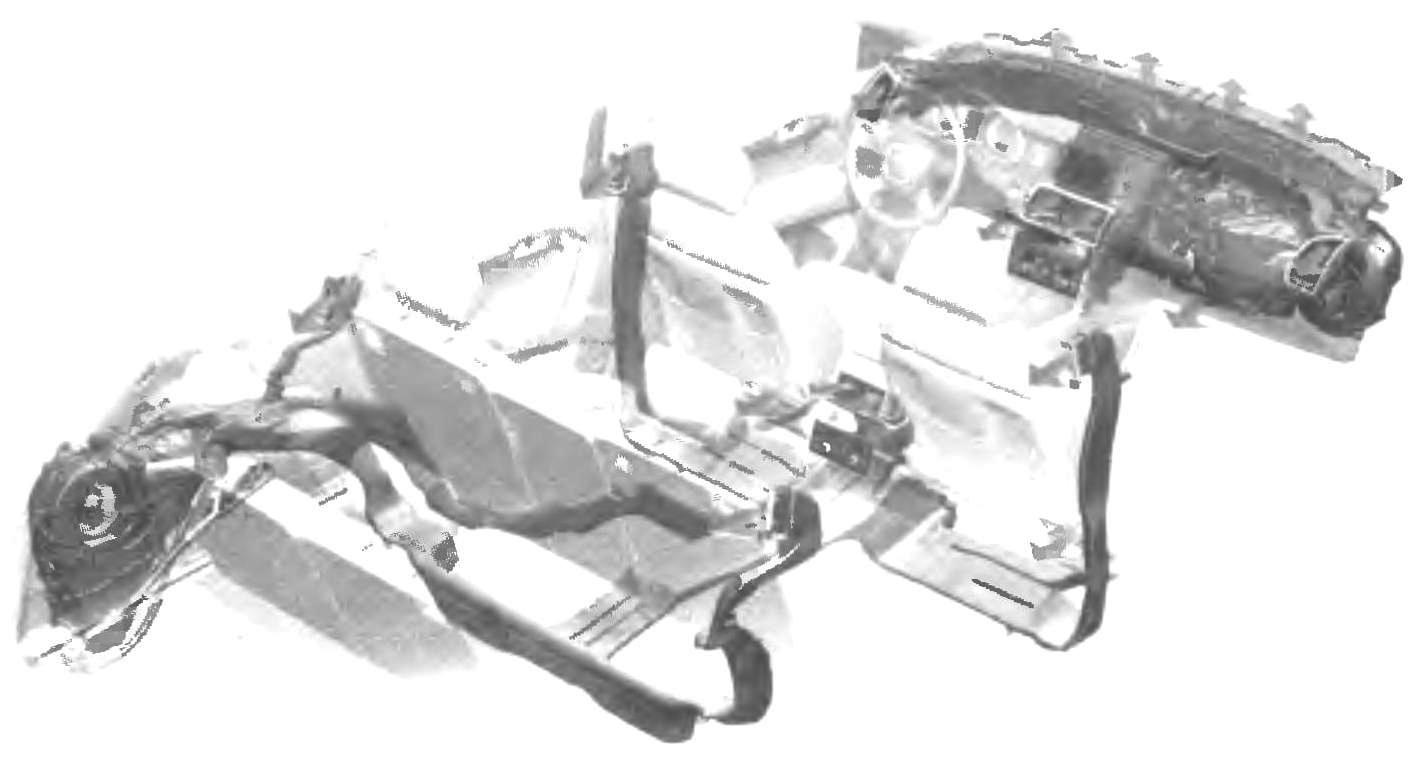 Dual-zone climate control is standard on the car 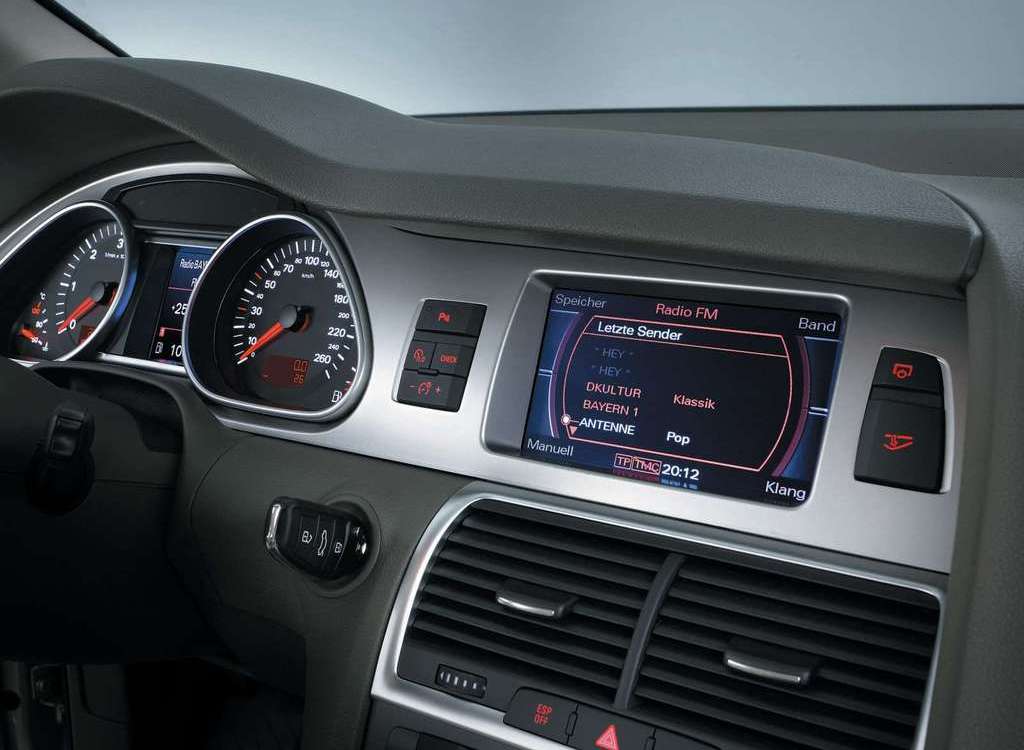 The instrument cluster of the car
The automakers have tried to combine the gas strut with gas-filled shock absorbers, however, was quite complex and therefore expensive construction of a Fully controlled air suspension managed to create only in 1980-ies the engineers at Volkswagen — it was equipped with car-prototype on the platform of the VW Golf. However, the first production car without torsion bars, springs, and the springs became all-wheel-drive Audi Allroad Quattro. The suspension of this car included all the elements that are present on Audi Q7 compressor compression 16 bar, cylinders, receivers, air dryer, struts and pneumatic lines.
The Audi Q7 is available with two engines — a petrol V8 and turbodiesel V6. First, having a working volume of 4.2 l, similar in construction to the motor, which is equipped with the Audi RS4 — he’s only a few deforsirovan (from 420 to 350 HP), but peak torque it increased from 420 to 440 Nm. Second, with a working volume of 3.0 liters equipped with piezo injectors that allow you to change the number of positives in each cycle. Depending on the load in the cylinder can be injected up to five servings of fuel pressure 1600 bar, resulting in a smoother and efficient process of combustion and, accordingly, high efficiency and low noise.
Transmission — only automatic, six-speed. The installation of a mechanical transmission firm does not provide.
A new car can be called a super-and a considerable role here is played by the so-called intelligent systems, coming to help the driver in critical situations. One of the most interesting is the system of aid in the rebuilding (Audi Side Assist), which informs the driver about the cars moving beside him on the adjacent lane and behind, at distances up to 50 m the Space around the Audi Q7 is scanned radars operating at 24 GHz and in case of danger (when in the area of tracking a moving object appears) on the exterior mirror housing lights up the signal light strip LEDs. When there is a danger of a collision, a beep signal. 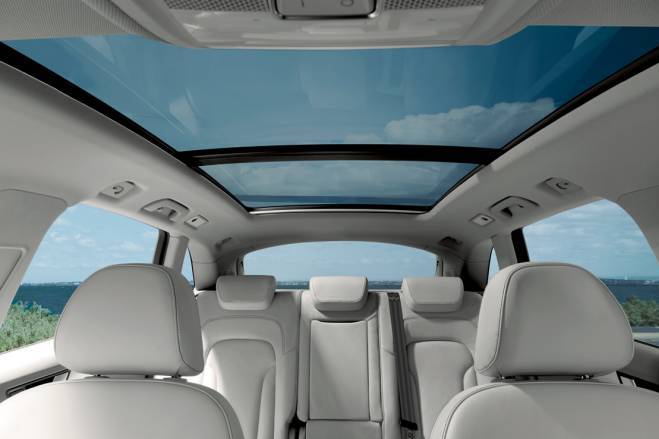 Option buyers may be offered a transparent three-piece panoramic sunroof Open Sky
The machine is equipped with another interesting electronic device system, adaptive cruise control, which can maintain distance to the vehicle ahead. If the driver turns in a row with a small speed, the system will first warn him light and sound signals about approaching ahead of the vehicle and if the driver does not react to them, will bring into effect emergency braking.
Very handy device — color rear view camera with the indicated trajectory; as an option and front camera included in the system of the cruise control.
In the standard equipment of the vehicle includes the innovative operating system — multi-function interface MMI, has received deserved recognition on the Audi A6 and Audi A8 Management is made by rotating a handle located on the Central tunnel, it is responsible for selecting functions, while the buttons around it for a submenu that includes the settings of the navigation system, trip computer, operation mode air suspension, etc.
The number of options can be attributed to three-piece panoramic roof Open Sky, which is located almost all over the salon. The front section area of 1.6 m2 can be lifted and moved back; the plot on the third row of seats is a lifting hatch. In Sunny weather, the roof closes automatically blinds. Mechanisms of the roof can be controlled from the first and the second row of seats.
Specifications all-wheel drive Audi Q7 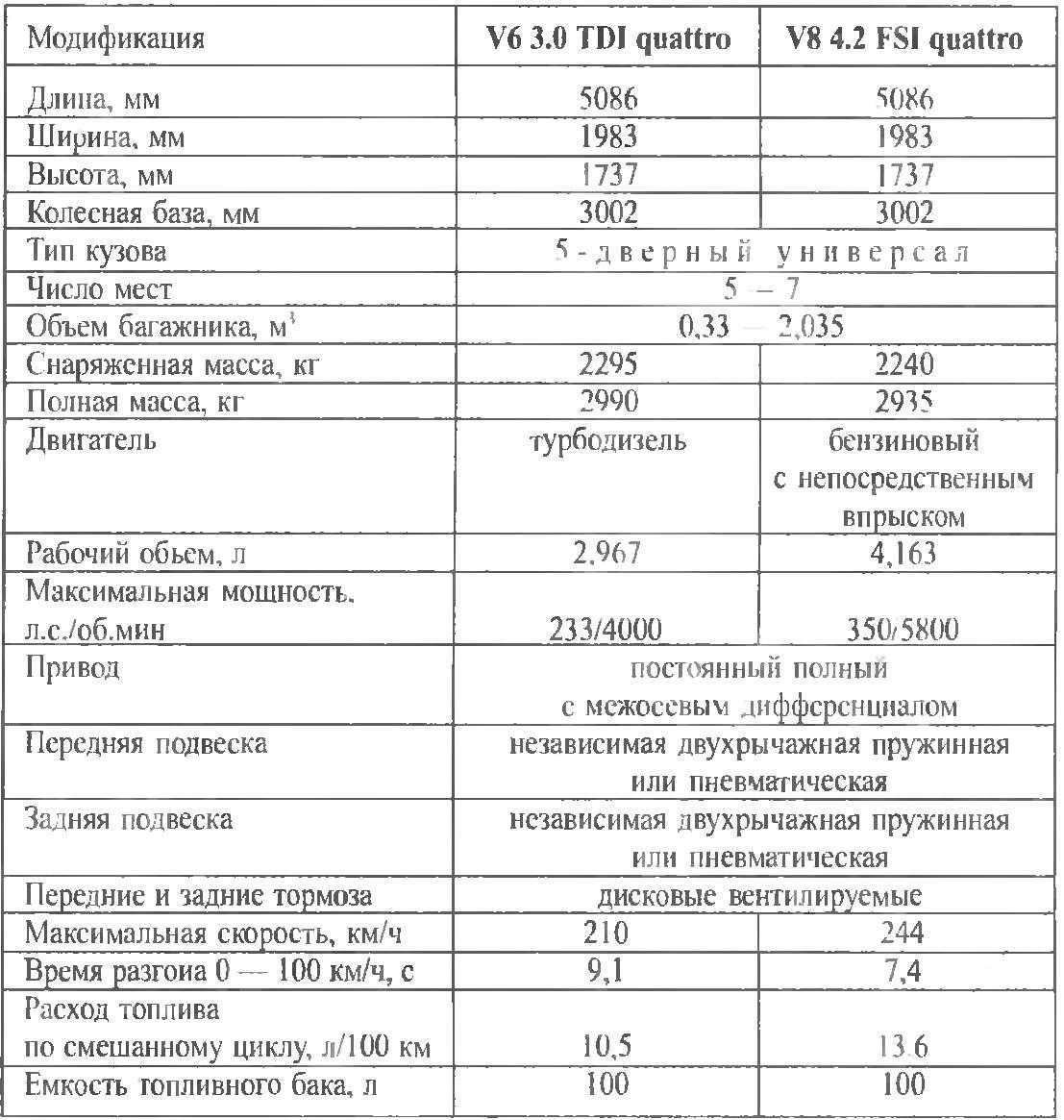 In conclusion, the article are a few figures about the cost of the SUV Audi Q7. The most “affordable” modification can be considered as its the diesel version with the 3-litre turbocharged power unit — official dealers are asking for it “only” 77,000 dollars. Well, the petrol version is significantly more expensive — for modification with 4.2-liter 350-horsepower engine 4.2 FSI buyers will have to pay 107 673 USD.
I. EVSTRATOV