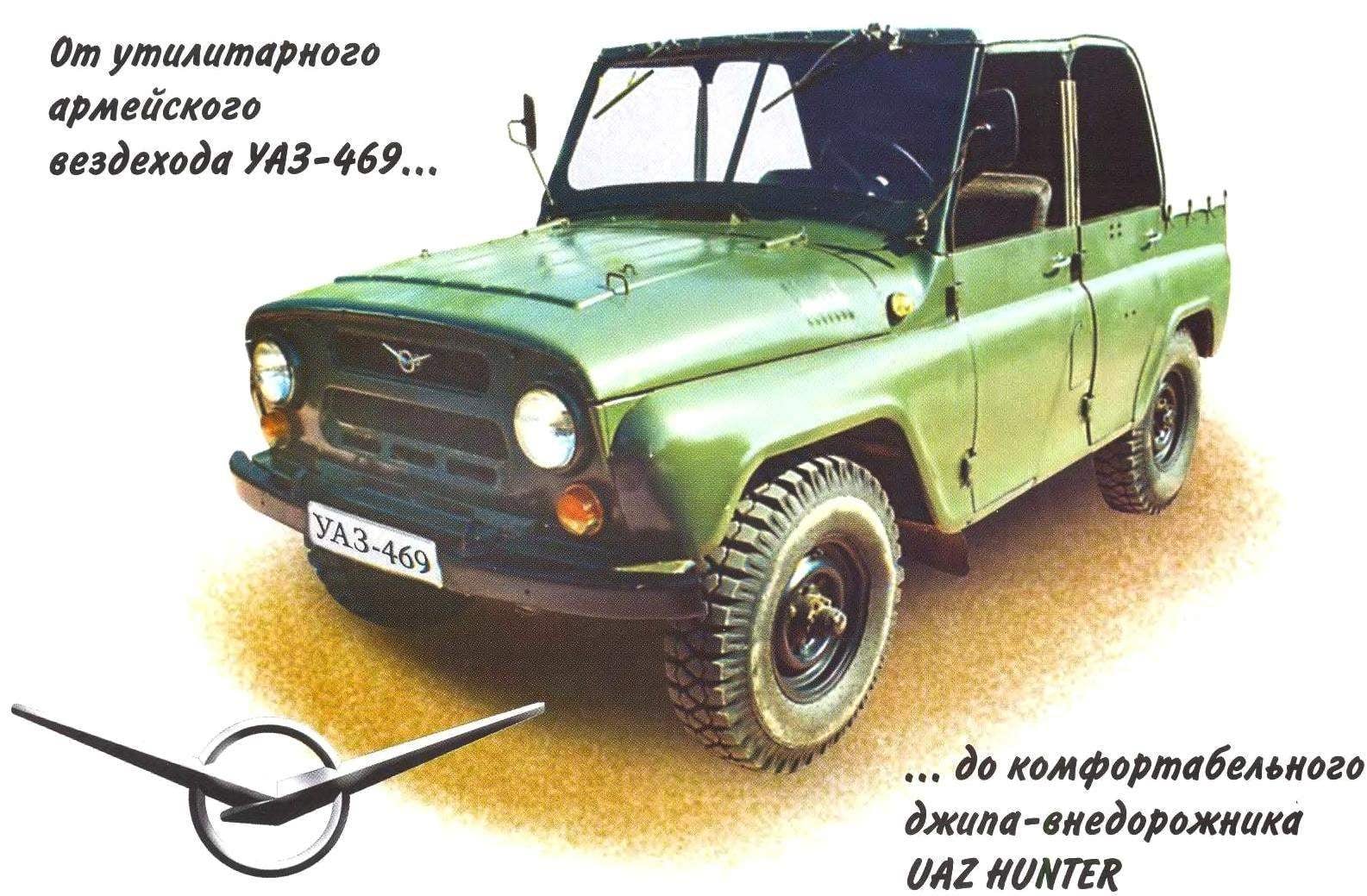 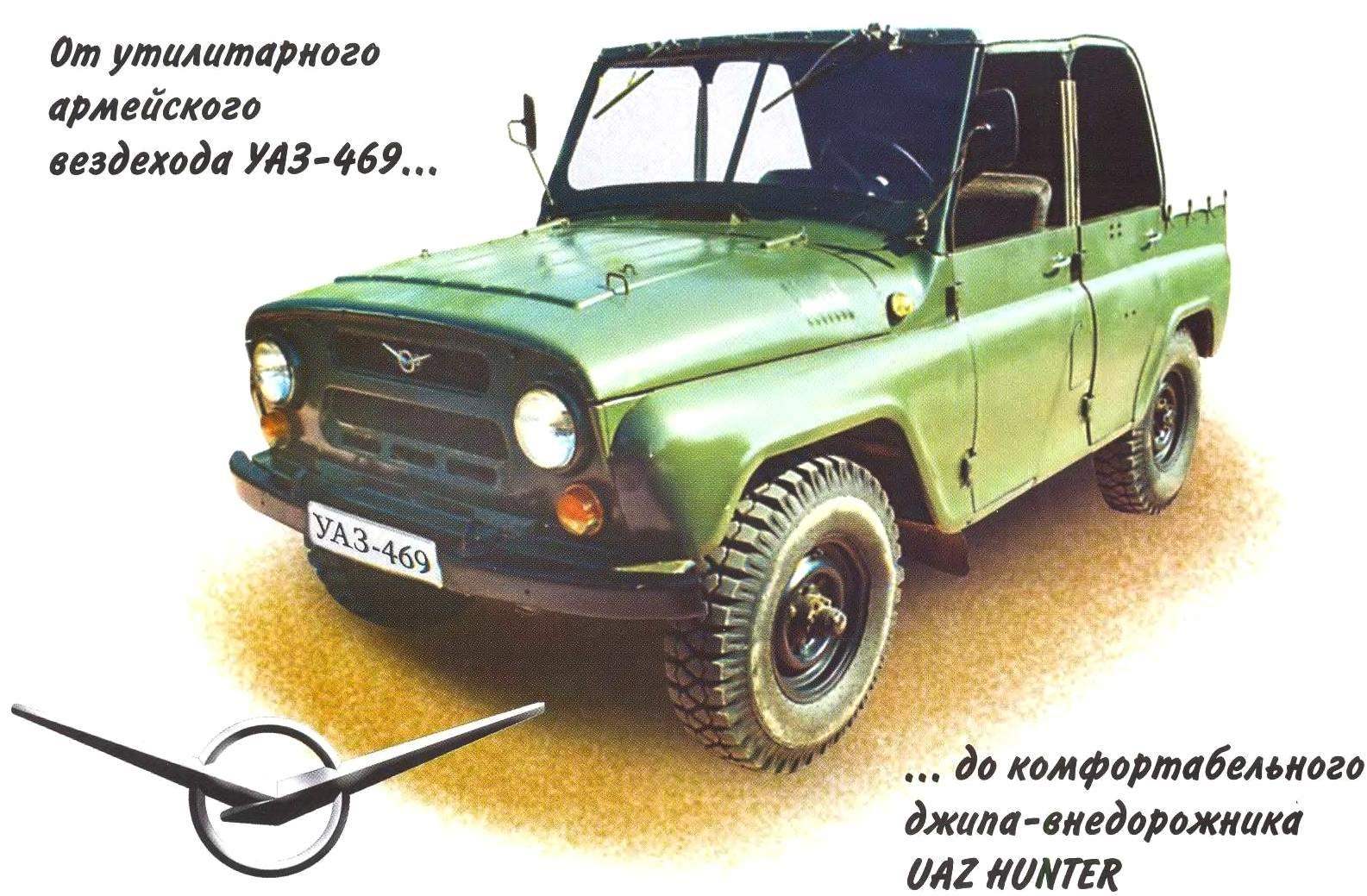 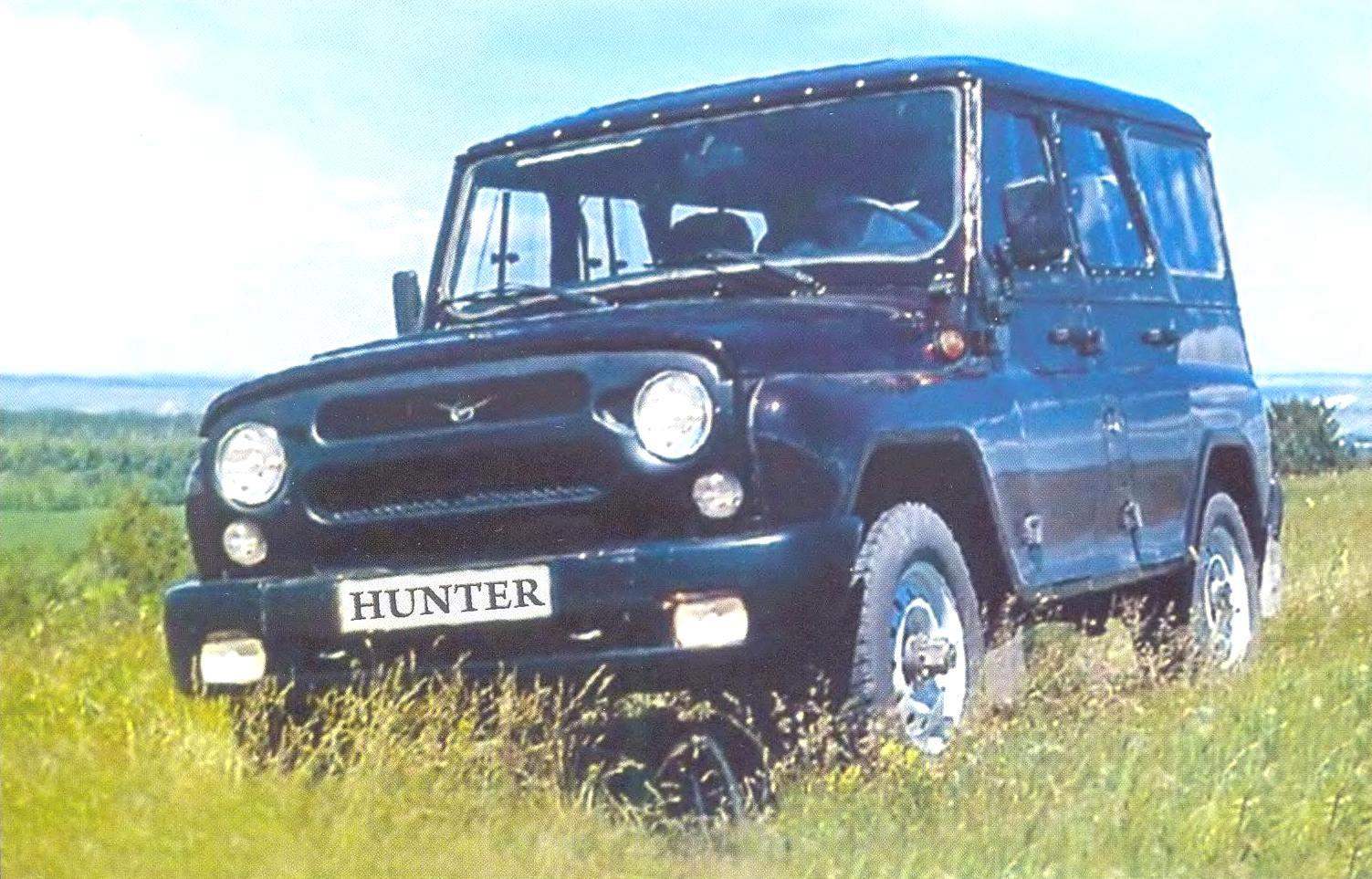 Army SUV UAZ-469. Demand for automobiles-vehicles in Russia is unlikely to decrease in the coming decades, so the issue in our country is not too expensive SUVs, designed for wide circles of motorists, living in rough terrain, most likely, will continue — because the demand always stimulates supply.
Among such domestic AWD cars are still popular and recently updated old Niva BA3-21213, and its younger rival, the Chevrolet Niva, and, of course, familiar not only to inhabitants of Russia, but also in many other countries supervezdehodov UAZ-469 (with some time — UAZ-3151), nicknamed “goat”.
With the beginning of the great Patriotic war many Moscow enterprises were evacuated to the East. Among them were the Automobile plant named after Stalin — ZIS.
In August 1941, in Ulyanovsk, on the Volga river began construction of the Assembly line of ZIS, and by July 1942 the rate of Assembly of the truck ZIS-5 was from 20 to 30 vehicles per day.
In 1945 the plant began to collect “lorry” GAZ-AA, and then the GAZ-MM, in parallel, mastering the production of components and assemblies for these machines. And since 1950, it began serious work on the technical preparation of the automobile for the release of a new army all-wheel drive passenger car GAZ-69 AND GAZ-69A, designed and produced at the Gorky automobile plant. The first production vehicles came from the Assembly Department of the Oise in 1956.
It was assumed that “sixty-ninth” will be produced by the plant at least 15 years, but in the design office of the Oise under the leadership of Peter Muzyukin almost immediately began to develop an army jeep of the future. 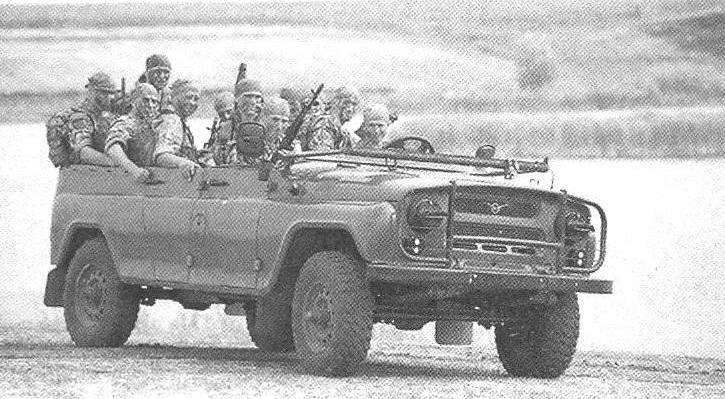 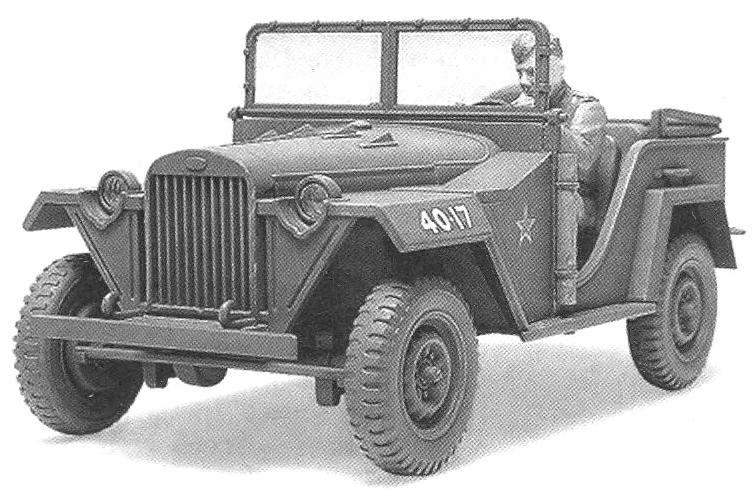 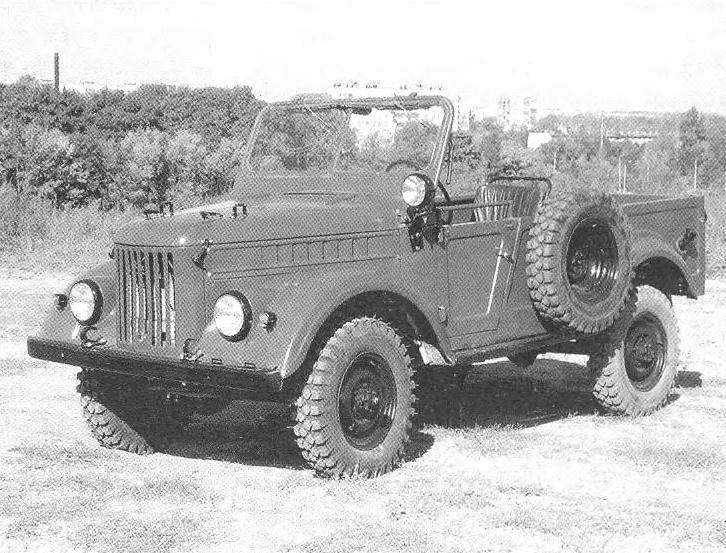 The GAZ-69, immediate predecessor
The new car was planned to equip the 70-horsepower overhead valve engine with a displacement 2,445 liters, three-step gearbox, reduction gears and leaf spring suspension. In the design preference of the geometrical parameters, providing a permeability — increased ground clearance, large-diameter wheels, and the significant angles of entry and exit, but often forget about the flexibility of the engine, optimal tread design of tires and traction parameters of the transmission.
The pilot model of the new machine was demonstrated to representatives of the Ministry of defence in the autumn of 1960. The vehicle was accepted by the customer, in General, favorably, however, the clearance he was recognized as insufficient. The most radical means of increase of steel wheel motors, which allowed to increase the ground clearance from 220 to 300 mm. it was assumed that the civil modification of the machine will be released without the wheel reducers.
In 1961 began testing military and civil variants of the new SUV, during which the vehicles passed through Central Asia to the Pamir, then reached for the Caspian and along the Volga, returned to Ulyanovsk. Further in accordance with the observations of the test, changes were made in the design of machines, and only in 1964 jeep passed state tests.
Mass production of automobiles, which received the index UAZ-469 and UAZ-469Б, began only in 1972. Interestingly, in China, which received documentation on the production of this army jeep, Beijing BJ 212 (the name given to the Chinese version of “469-go”) has already started to produce in 1965. Chinese SUV differed from the domestic only design the front of the body.
Ulyanovsk military off-road vehicles in the series were equipped with the same engine, and light trucks UAZ-452 — it was produced at the Ulyanovsk motor plant, and by design, it differed little from that which staffed passenger cars GAZ-21 “Volga”. By the way, for many units truck UAZ-452 and jeep UAZ-469 were unified — one of them was the engine, four-speed transmission with synchromesh on third and fourth gears, a two-stage transfer case and disconnect front axle. 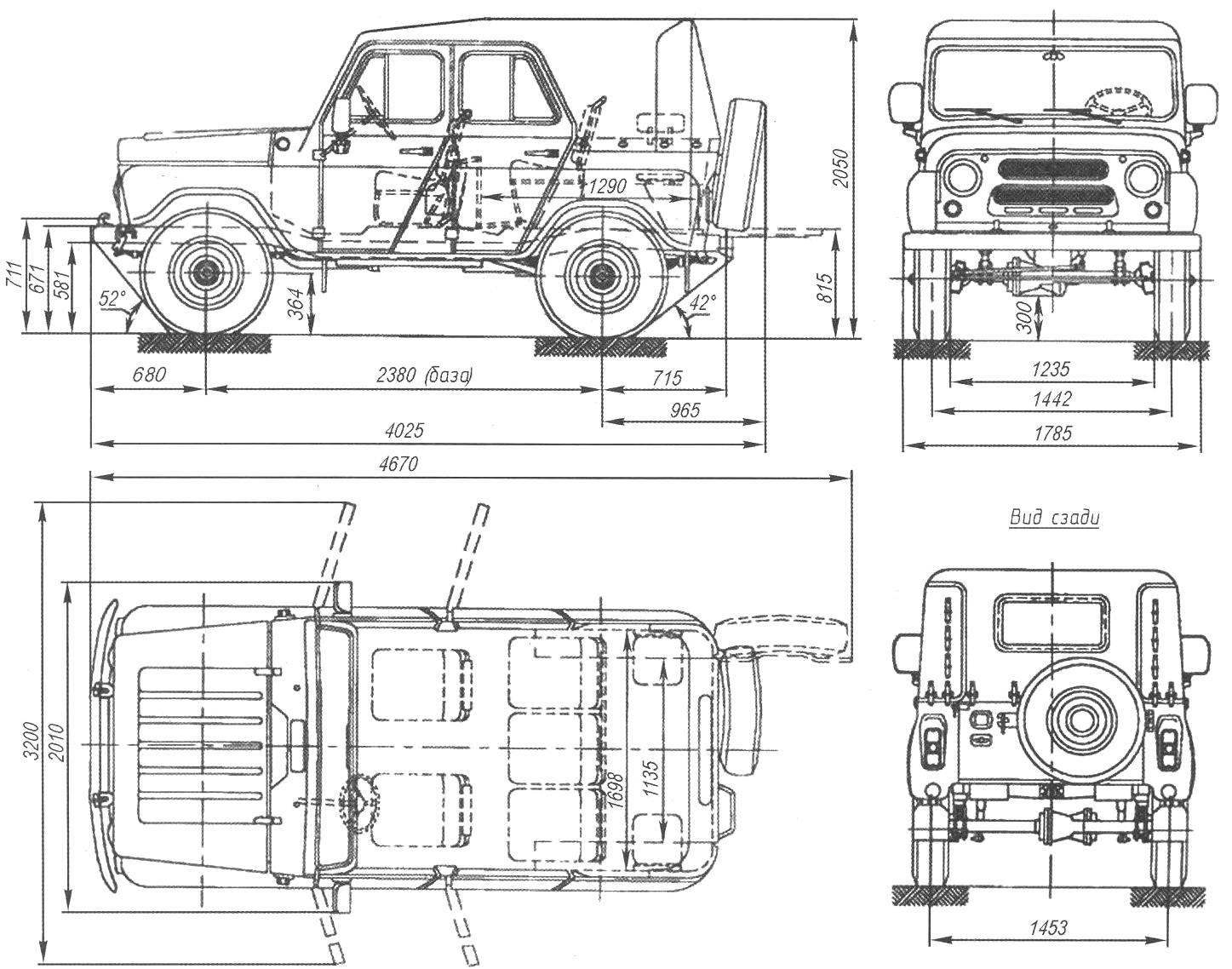 Basic dimensions UAZ-469 (UAZ-31512) — army all-terrain vehicle with onboard gearboxes and canvas top body
When designing a military version of the jeep used and non-standard technical solutions as mentioned, to increase ground clearance from 220 mm to 300 mm used wheel gearboxes with a ratio of 1.94, which made more compact crankcase main transmission by reducing its transmission ratios 5,125 to 2.77.
The main customer machine was made by the Ministry of defence, therefore, it is determined by its technical characteristics. In particular, a canvas awning in conjunction with a folding hood on the windshield made the vehicle suitable for transportation by air — planes and helicopters. And no one was interested, because of this the car was almost impossible to operate in the harsh Russian winter. And such “flying” “UAZ” of considerable mass production Ulyanovsk automobile plant required only a few percent! In fairness it should be noted that a prototype all-metal body was created by the factory back in 1967, however, the forging equipment of the Oise are not allowed to make major body panels. And for the service and a police “UAZ” artisanal dural and steel roof riveting workshops of various enterprises. Interestingly, he was able Ulyanovsk automobile plant to master production of all-metal machines only in 1993 — 21 years after the launch of a series UAZ-469!
In addition to SUVs Ulyanovsk automobile plant produced a number of civil and military light-duty vehicles. Among them was a truck with a side platform UAZ-451 D and van UAZ-451, serial production of which was deployed in 1961. 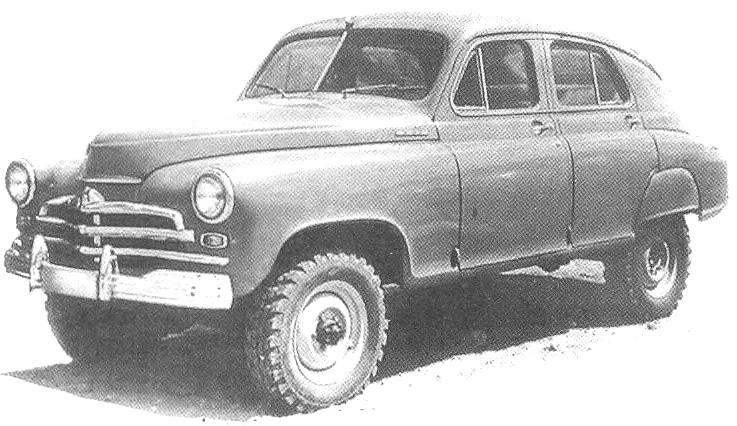 UAZ-469 (UAZ-3151) with canvas top body
Do not forget Ulyanovsk designers and army vehicles, designing all-new, sometimes very interesting options 469. The most original of them was floating UAZ-3907. Machine with two propellers, equipped with a 77 HP engine, on land speeds up to 100 km/h, and water up to 9 km/h. the body of the car, which had two airtight doors, able to carry 7 people or 750 kg of cargo. Unfortunately, the amphibious vehicle never entered mass production — in the plans of the Ministry of defence this versatile vehicle was not provided.
In 1985, in accordance with the order of the Ministry of automobile industry, Oise introduced a new system of indexation of manufactured machines. So, an army UAZ-469 with the on-Board reducers became the UAZ-3151, while the UAZ civil-469Б — UAZ-31512. In accordance with this system the machine is equipped with new engines and other major assemblies received additional figures indexes, transforming them into six-seven figures resembling telephone numbers, what is not clear is the essence of picking a specific car model.
The design of the car UAZ-469 (UAZ-3151)
UAZ-469Б and UAZ-469 are frame vans, open four-door body, a removable canvas top and folding tailgate. UAZ-469 differs from UAZ-469Б the presence of wheel-gear units and screened electrical equipment.
Car engine — four cylinder, carburettor maximum power of 75 HP at engine speed 4000 rpm./min. transmission — four speed with synchromesh on third and fourth gears.
Transfer case — two-stage with spur gears.
Basic dimensions UAZ-469 (UAZ-3151) is a civilian modification of the military vehicle without side gears and with metal-top body 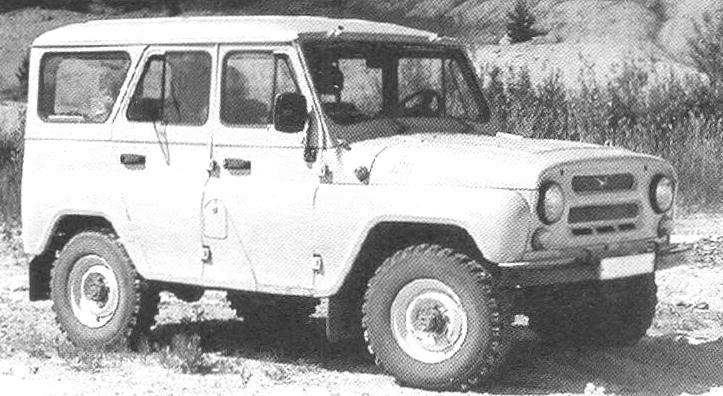 The UAZ-3151 is the version of spring front suspension 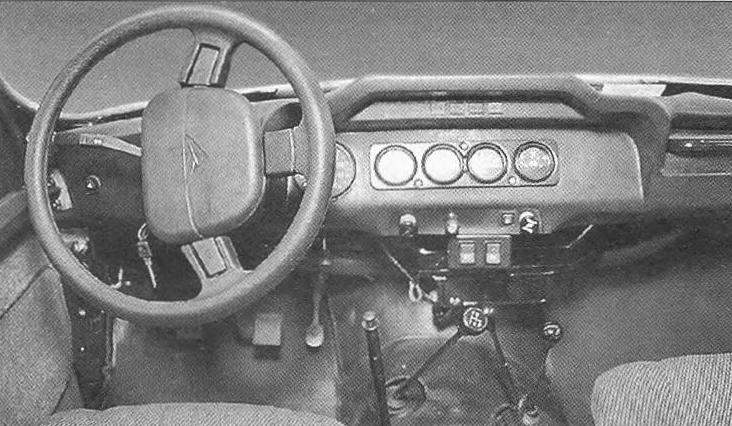 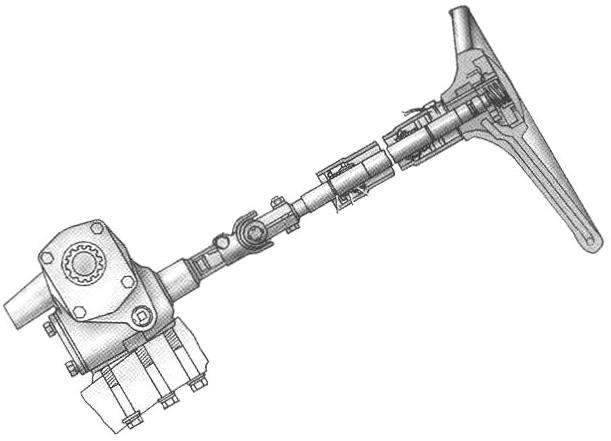 The design of the steering mechanism of the car UAZ-3151 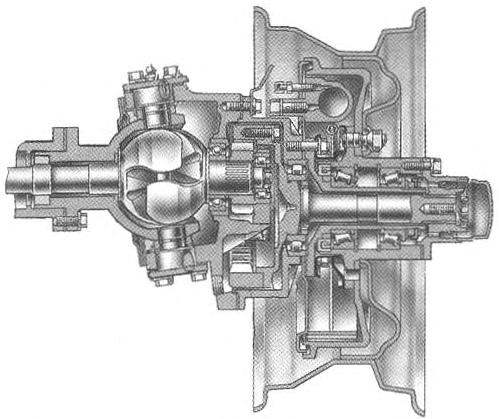 Device front axle with onboard reducers of the UAZ-3151

Rear axle of the SUV with the side gears 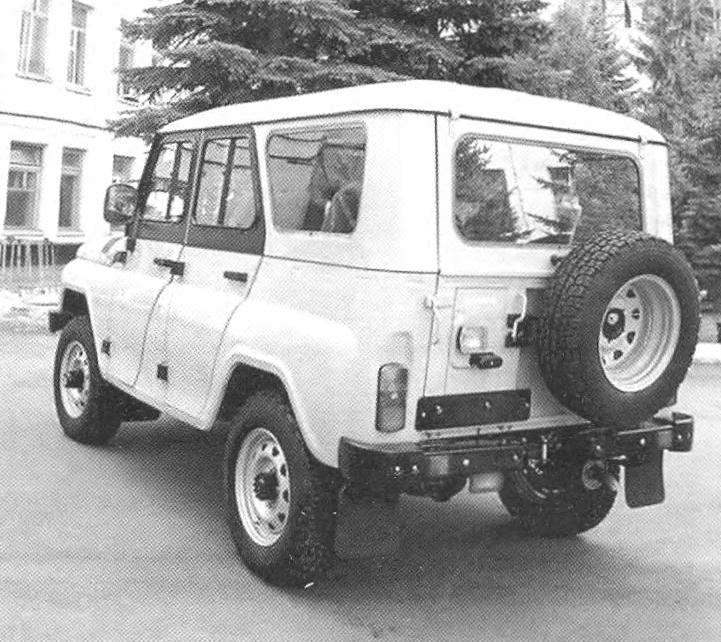 UAZ-469 (UAZ-3151) with metal-top body
The steering gearbox is a pair of globoid worm and dvuhgorbogo roller with a ratio of 20.3.
Front and rear suspension — longitudinal semi-elliptic leaf springs with hydraulic double acting shock absorbers.
Brakes on all wheels — drum, with hydraulic drive. Parking brake — transmission Assembly with a mechanical drive.
Electrical — 12-volt.
The maximum vehicle speed is 100 km/h, fuel consumption is 10.6 liters per 100 km at a speed of 30 km/h.
Technical characteristics of the car UAZ-469Б and UAZ-469

In recent years, the “Goat” was subjected to multiple upgrades in accordance with the needs of civil users. The fact that today the Ministry of defense was not acting in the role of the customer and can not dictate to plant their requirements for the design of the jeep. In favor of the buyer, the designers have created a warm and all-metal body with an effective heater and comfortable seats, and modern soft suspension springs (front) and small laminated springs (rear) and fine-grained noise the transfer case, and power steering and hid protruding above the instrument panel motor-wiper motor… the Creation of all this in no small measure contributed to the development of fundamentally new models and PATRIOT SIMBIR with a brand new component units, which eventually migrated and the old 469.
The model, called UAZ HUNTER (eng. — hunter), looks a little different from the “goat”, although it was created on the new platform. Everything in design has dramatically increased the number of imported parts.
“Hunter” is equipped with new solid axles, like “Spicer” of its own production, modern constant velocity joints such as “Beheld” on the front wheels with twice as much resource than the former, a new, more convenient to use fine-grained helical razdetoy box — the level of noise compared to the classical spur reduced by 8 — 10 dB, and the connection of the front axle and the low gear is now two, and one lever. Changed and the gearbox — it was a five. To all HUNTER equipped with power steering, clutch of LUK type with a diaphragm type, front disc brakes and front spring suspension. 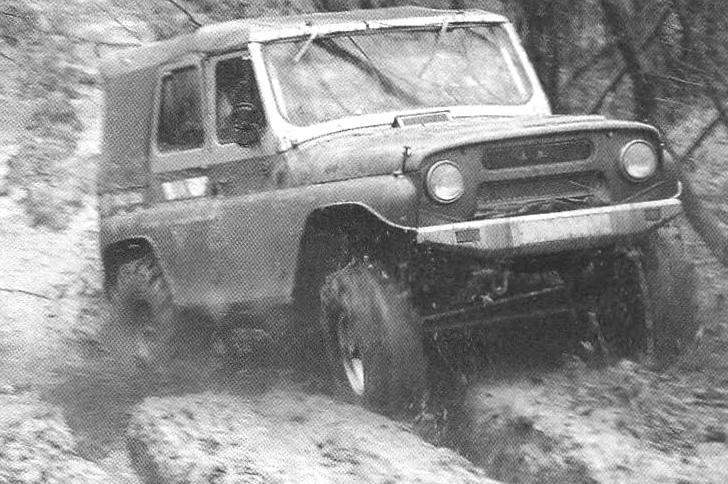 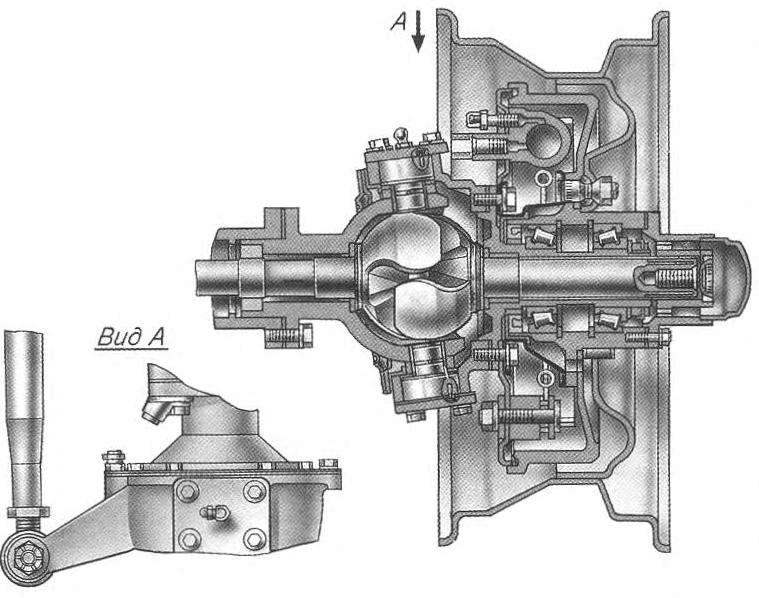 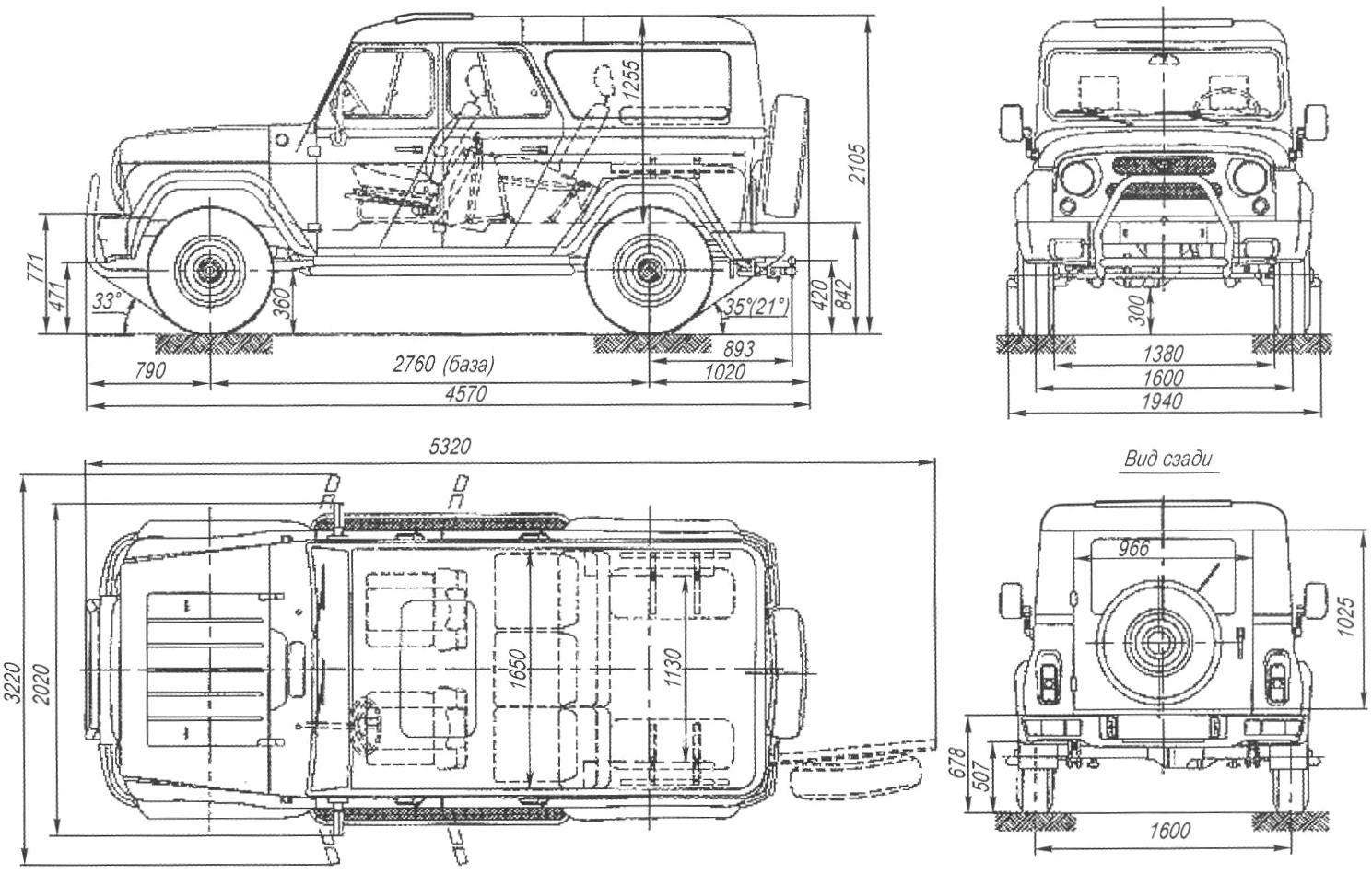 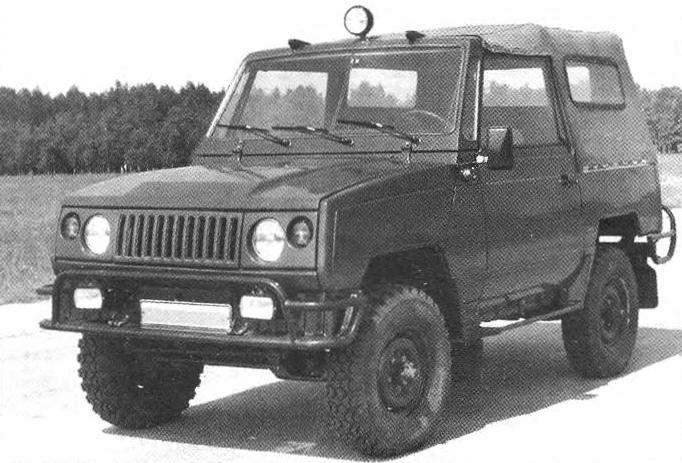 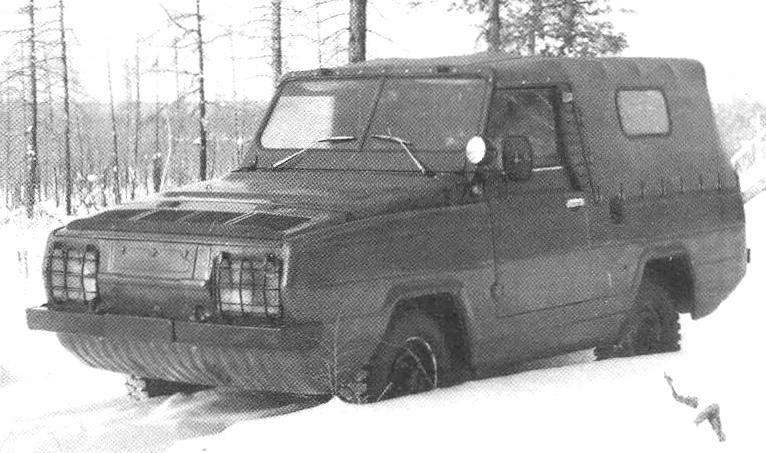 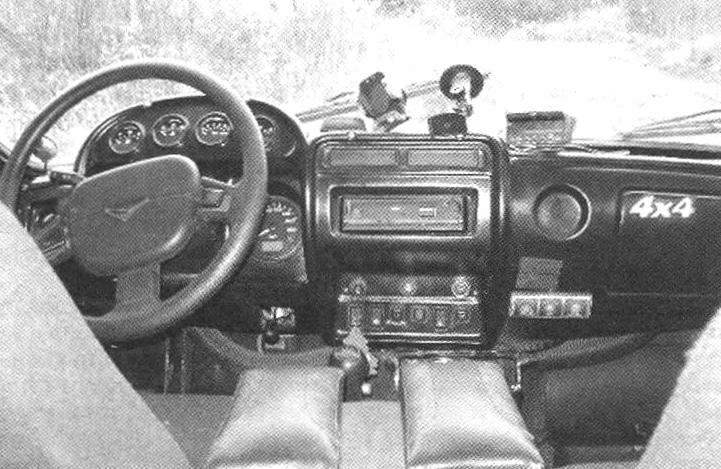 The front of the cabin of the jeep UAZ HUNTER 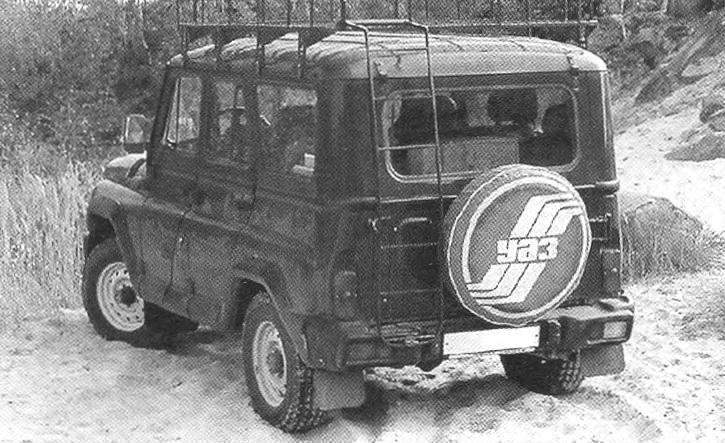 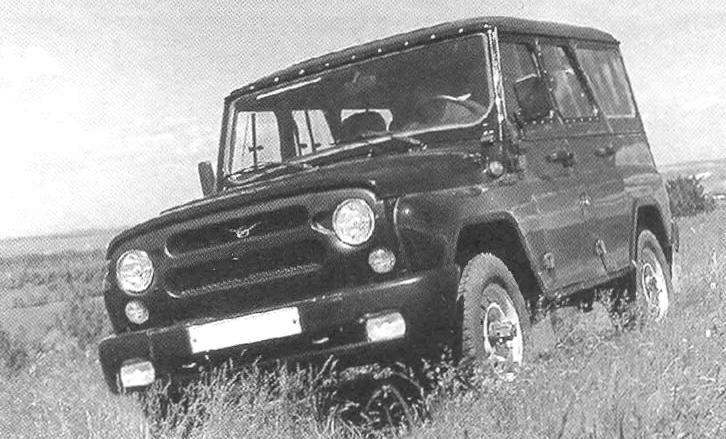 Comfortable SUV UAZ HUNTER, embodies all the best that was laid by domestic constructors in a family of military vehicles GAZ-67B — GAZ-69 UAZ — 469 the UAZ —3151
At first, HUNTER was manufactured with one of two engines — either a new fuel-injected 140-horsepower 16-valve petrol working volume of 2.7 l with catalytic Converter exhaust gases, a Polish 86-horsepower turbodiesel Andoria working volume of 2.4 L. But for the army, police and Ministry of emergency situations the car is equipped with more simple and unpretentious carbureted motor.
Cooling system the engine got a new aluminum radiator high efficiency.
Superficially “the Hunter” is different from “Goat” safer plastic bumpers, sliding glass in side Windows (by the way, the car door has received a double seal) and a hinged rear door. As for the interior, and there are enough differences from the interior of the 469 th — more comfortable seats, fabric door trim and plastic dash. UAZ HUNTER has already managed to earn quite friendly assessment and lovers of off-road extreme, and followers of asphalt trails. The machine is well behaved and the speeds at which the “Goat” started to live up to his name, and in deep ruts when you enabled step-down transmission. This means that its advantages “Hunter” will certainly share with the honored predecessor, still produced an army jeep UAZ-469 the UAZ — 3151.