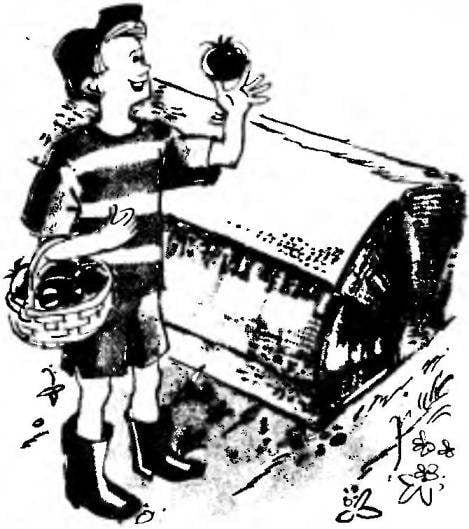 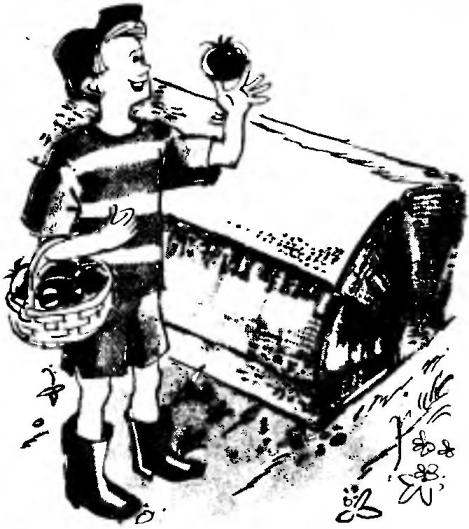 Do you on individual country area parniczky or just cover with a film of the early crops in the beds — we need to ensure the usability of such a coating. Don’t count how many times the season is open-close this transparent tent. We offer Hungarian magazine “Earmaster” design of greenhouse just combines simplicity and ease of use. The fact that the film frame of the tent can be folded like an accordion and also be easily deployed, securely harboring plants.

The manufacture of frames-base greenhouse does not pose any difficulties. The corners of the beds are driven four tapered wooden block and nailed boards, forming a box: it is possible to lay a greenhouse mixture, or to form a conventional bed.
But with the frame the situation is more complicated, although it is available to every gardener.
The size of the resulting boxes harvested four U-shaped frame, the ends of which are fixed to the two plywood disks (the latter follows proolifit and to cover with oil paint, not afraid of moisture). The discs are mounted on to-Rob-base along its longitudinal axis is pivotally. This gives the opportunity to lift one edge of the frame, gaining access to the garden. At the completion of the frame, turning on the axes, again lowered the box, securely covering the bed.
Is working with film — you need precision to use slim framework and the finishing material. Throwing the cloth on the prepared frame, customize it and begin to strengthen. First to the back of the boxes, and from the front side to the first frame of the omitted frame (which corresponds to the position “closed greenhouse”). On the frame of the film is fixed with an additional invoice of lath and small nails; as consistently — and to the rest of the framework, the way to the rear. Then close up the foil from the ends of the greenhouse; for simplicity, the ends of the pleated cover is attached to the rotating discs with the same stuff overhead plywood circles. 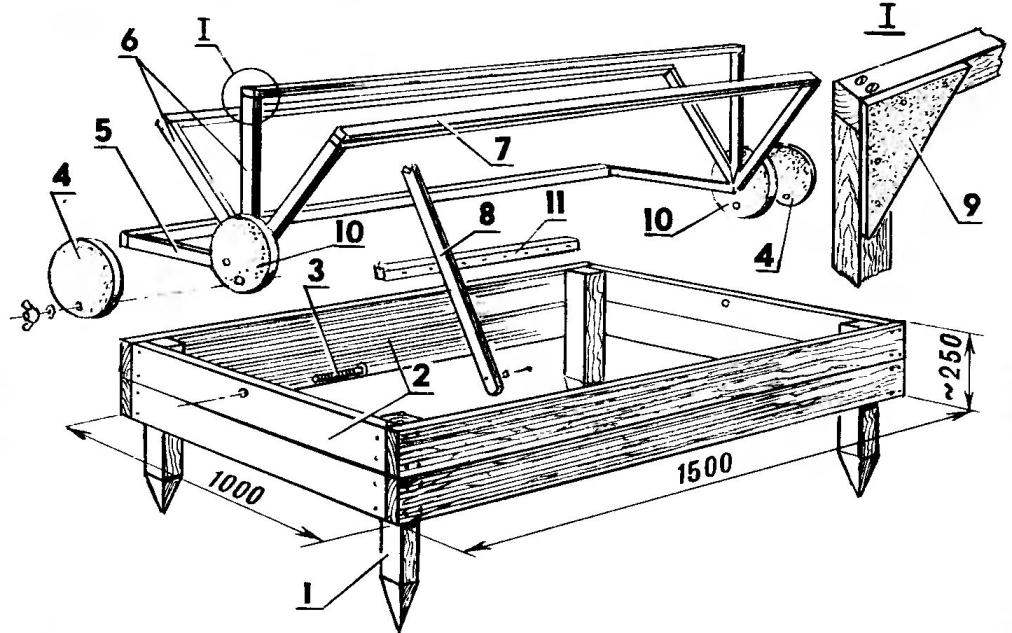 Greenhouse with swivel surface:
1 — timber box corner, 2 — box, 3 — axis rotation of the disc (screw M8, 2 PCs.), 4 —overhead mugs, 5 — frame rear (hinged), 6 — medium frame, 7 — frame front (rake trim), 8 — rod-prop, 9 — Klondike solitaire the gain frame, 10 —discs povorotnie, 11 — the mount of the film from the outside of the rear wall of the box.If the film is installed correctly, when lifting the front of the frame the whole frame begins to turn the wheels to the rear of the box (with the side film is folded, and the rear frame rests on the box). Remains to back resistant to the rack frame in this position and you can work with plants. Remove the rack — frame cover turns the wheels forward, the front frame will rest on the box: the greenhouse is closed.

Mount the drive:
1 — rotary disk, 2 — frame rear (hinged), 3 — joint of the rear frame, 4 —frame medium that a 5 frame front. And-the position of the framework with raised floors, B — in the closed position.
To strengthen the frame frame can be plywood gussets installed on the corners, nails or screws.
I should add that to increase the operating window with the rise of the rear frame, the frame may be attached to the wheels swivel as shown in the drawings.