Use in the red Army captured German tanks (as, indeed, in the Wehrmacht Soviet) began with the first days of the great Patriotic war. So, on June 27 1941, at the beginning of tank battles in the Rivne — Lutsk — Brody, a movable group of the 8th mechanized corps was captured 13 of serviceable tanks Pz.Kpfw.III and Pz.Kpfw.IV. They decided to use with maximum efficiency — under cover of night to strike at concentrated for morning attack by German units. Penetration into the German tank column was quite successful, as the captured German machines were carrying German markings. Further can be seen in the story of the participant of these fights Hero of the Soviet Union G. Panico: “…I commanded: “Close to the last tank!” We almost rested in his gun. Shot in the tower, and the second time to the tower. He stopped the tank.

None of this tank popped up and it didn’t. It makes me happy. We still dark behind where shooting, getting stronger, very light-‘ lo. My partner, coming from behind, passes me and shoots too. He was not lucky. The tank in which he was shot, broke out a bright spark, besides the crew managed to jump out, and to destroy it, had to open machine-gun fire. Now light is not only back, but here, around us. The Germans have realized that someone shoots. The head of the column began movement in the direction of the panic.”

This battle scene is very characteristic. And subsequently captured tanks were used in the first place so for the sabotage raids into the territory occupied by the enemy. Pretty widely known, for example, a good RAID tank unit, which consisted of the German Pz.Kpfw.III, under the command of Sergeant I. Barysheva on the Volkhov front in April 1942.
However, the captured machine was used to conduct direct combat operations, although, again, not without a subversive hue.
In January 1943, on the outskirts of the city of Kamensk in the Donbass 169th tank brigade destroyed 22 and captured five perfectly healthy enemy tanks. Intelligence chief of the brigade decided to form them into a team, whose commander was appointed Lieutenant Irikov. The group entered in Kamensk. The enemy took over their tanks and did not open fire. Tankers Irikova managed to bring down eight guns, 15 tanks and destroyed up to 200 Nazis. Using the success Irikova, the 169th tank brigade rushed into the city without casualties and completed its task.
As a rule, no permanent units of the captured military equipment is not formed. Create temporary detachments, companies and battalions to accomplish specific missions. Captured tanks were operated as long as enough fuel, ammunition, spare parts. In the same range was used and a single captured machine.
Peak use of captured armored vehicles accounts for 1941 — 1943 years. At this time a number of companies were focused on its repair and restoration. Only in Moscow such enterprises have been at least two: the factory “Lift” and the all-Union Institute of mechanization (VIM). Second, this work continued until 1943. According to the memoirs of veterans, in the workshops of the Institute was repaired German, Czech and even French tanks. On some machines instead of the failed regular established automotive or tractor engines of Soviet manufacture. The guns of foreign brands has varied in Soviet DT. Last mounted on French tanks is even 37-mm guns.
In February 1942, in VIM arrived three KI command tank.Pz.Bfwg on the chassis of the Pz.Kpfw.I Аusf. V. Pretty long their repair was not of interest for the plant, as the tanks had no guns, and radio equipment was practically inapplicable in the red Army. But the front required well-armed machine, and the factory announced a tender for equipping their artillery guns of domestic production. There was little choice, because the factory had only four dozen 20-mm cannon tnsh aviation and motor-gun ShVAK, and five 45-mm tank guns of 1938.
One of the winners of the contest was I. Belikov (or whites). He offered to withdraw from KI.Pz.Bfwg (called the documents a “German machine-gun radiating without the tower”) all the radio equipment, and instead of a gun, set in a larger ball mount 20-mm automatic cannon ShVAK, which allowed to use a tank to combat German armored vehicle. One tank was converted in March 1942. Its frontal armor is enlarged slotted recess, in which the eight bolts inserted cast gun mask. The mask was “pear-shaped” with a gun, supplemented with a simplified trigger mechanism with the handle and shoulder rest. After testing the new weapons gun mount equipped with a screw stopper, and two cars out of three were sent to the front. The subsequent fate is unfortunately unknown.
Judging by everything, starting with the autumn of 1941, despite the retreat, the troops were constantly used, a significant number of captured military vehicles. It can be assumed that in the period of 1942-1943 it reached two or three hundred. In any case, by the spring of 1942 was issued a “Memo on the use of captured German combat and support vehicles,” which in short form is cited description of the design and controls of all tanks of the Wehrmacht, certain types of vehicles, tractors, cars and motorcycles. Were given recommendations on the use of tank weapons. 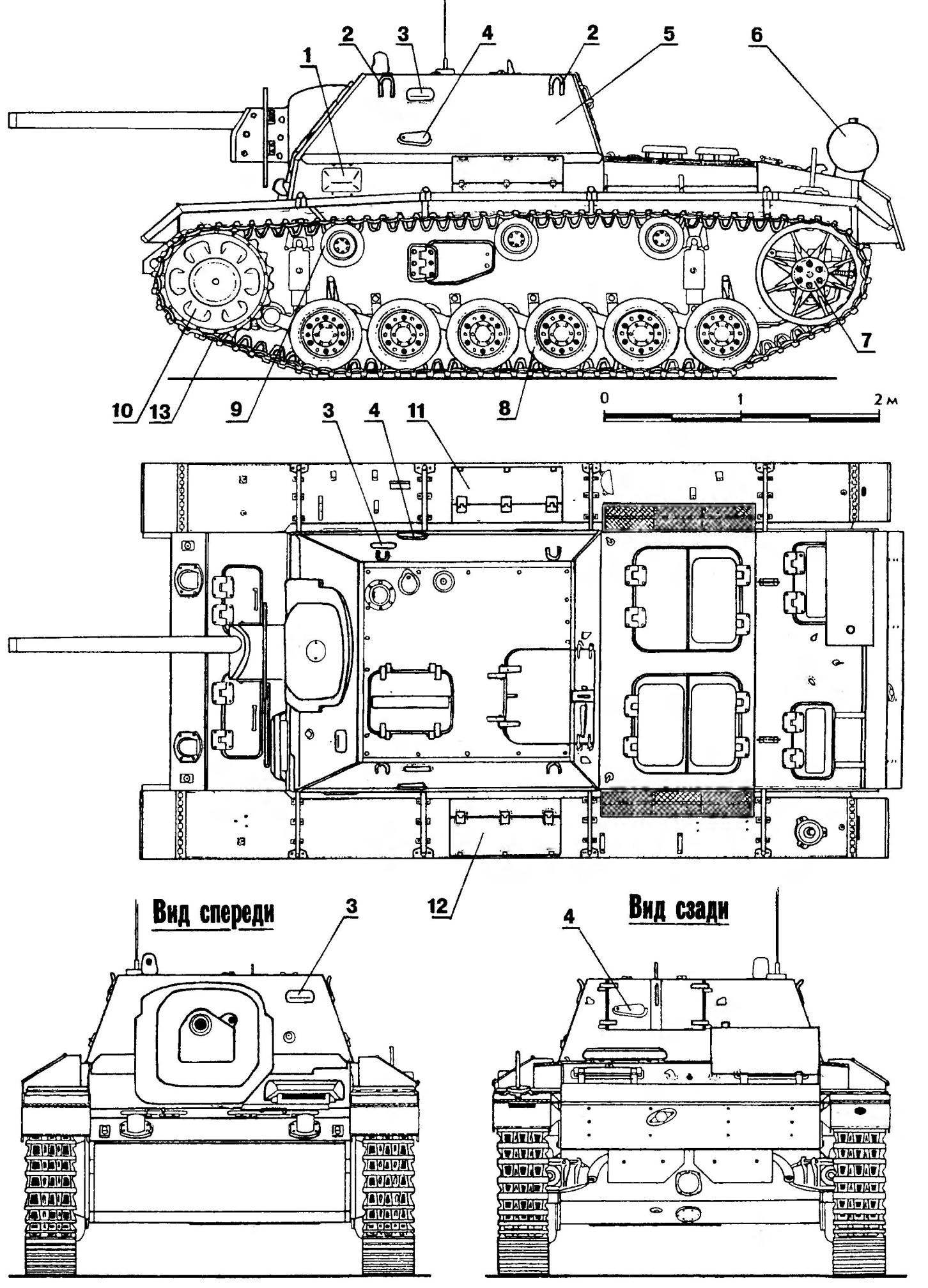 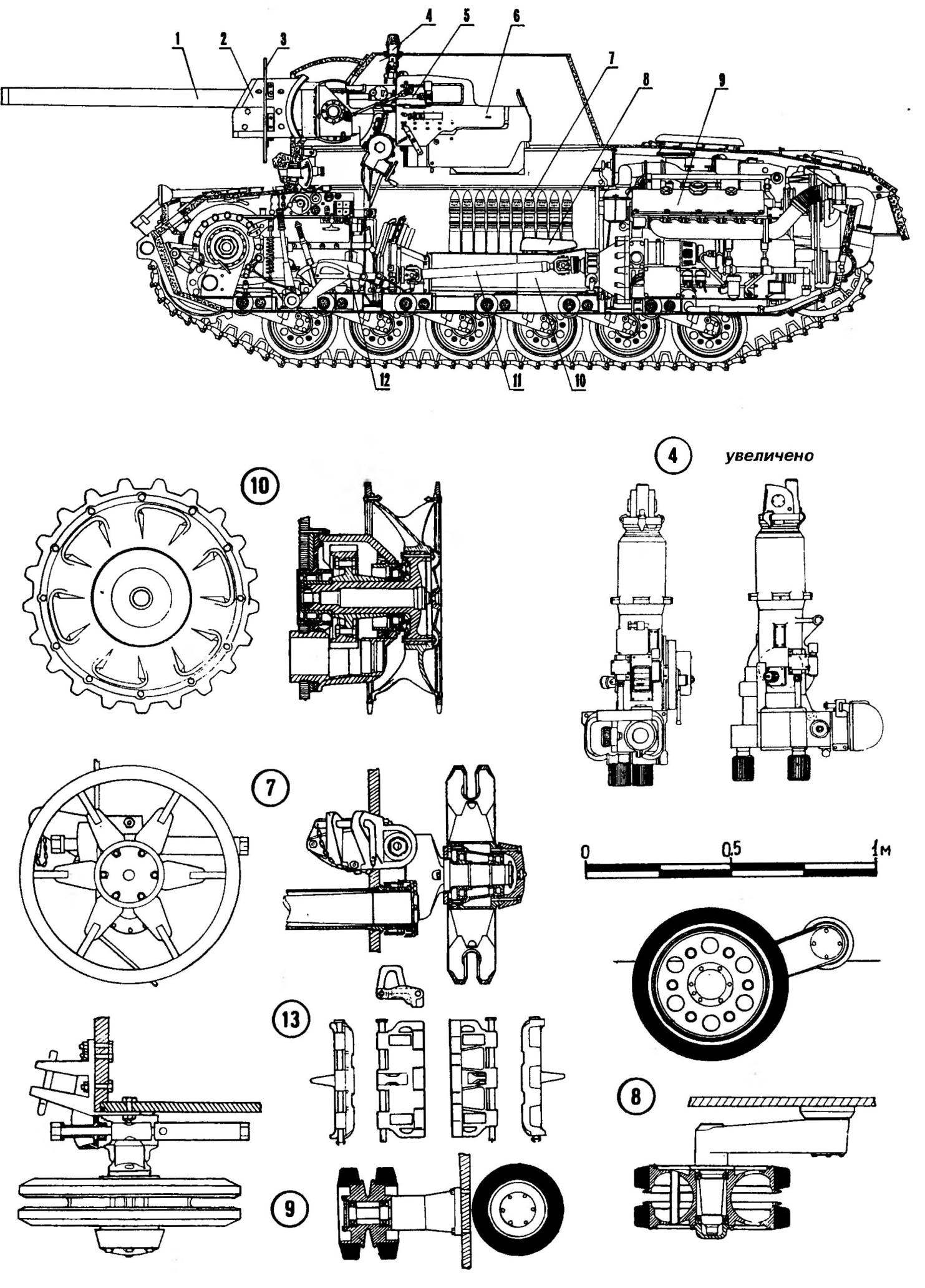