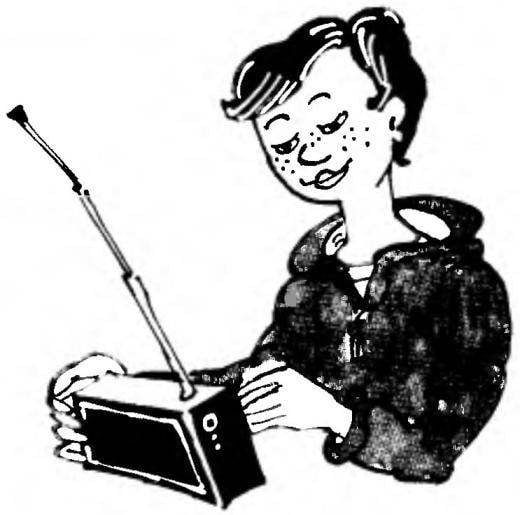 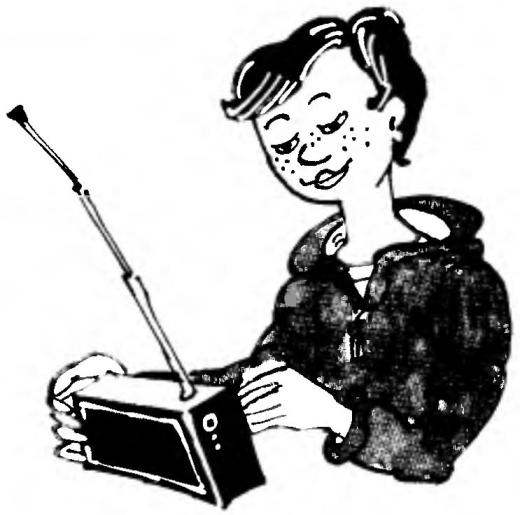 As you know, the cost of electrochemical cells has increased significantly. Therefore, many owners of portable radio equipment are beginning to use batteries. And they must be timely and properly charge. Of course, when the apparatus used a bit (and besides, it is all the same type), the problems with no charge. After all, to get a good charger (memory) for a renewable source of electricity in a single “radioimage” is much easier than, say, to ensure the viability and flashlight (and it 2хД-0.55 C), and all-wave receiver (5хД and 0.26 D), and tester (Sht-0,06). In addition, note that the proposed market memory in the majority of the road is not very reliable, is designed only for a certain type of batteries, and a strictly fixed number of elements.

Typical of such devices and other shortcomings. In particular, before charging the batteries should be removed from the apparatus in which they are installed, and then reverse the process, avoiding the “reverse polarity” or short circuit.
Given this, I want to share the technical solution, as they say, to cut the Gordian knot of problems and to standardize the charging of batteries for all portable equipment available in the apartment. We only need to collect at the base of the transformer TVK-110/1 homemade memory Standard, with the following parameters:
Capacity rechargeable batteries A • h……..0,03 — 3
The number of elements
in the battery pack………………….1 — 8
Voltage
charging In…………………….16 — 17
The device consists of charger, charging cable with two plugs (connected to the same contacts), typically used in 9-volt power supply units (PSUs), and response (charge) parts. Everything here is simple and clear even to the beginner.
Electronic Assembly, assembled on the transistor VT1, — charging indicator. It enables you to prevent an unpleasant situation, when time is spent, and charging did not happen due to bad contact in the battery or the connector.
During the flow of charging current across the resistor R3, a voltage drop occurs. Diode VD5 cut it at the level of 0.6 V. When this circuit is flowing opening VT1 base current, limited by resistor R2. Works HL1 led, the brightness of which is constant throughout the range of charging currents.
Diodes, rectifier bridge, any semiconductor. The main thing that they were designed for a working current not less than 0.3 A. But VD5 — be sure to silicon (the type is specified in the diagram). 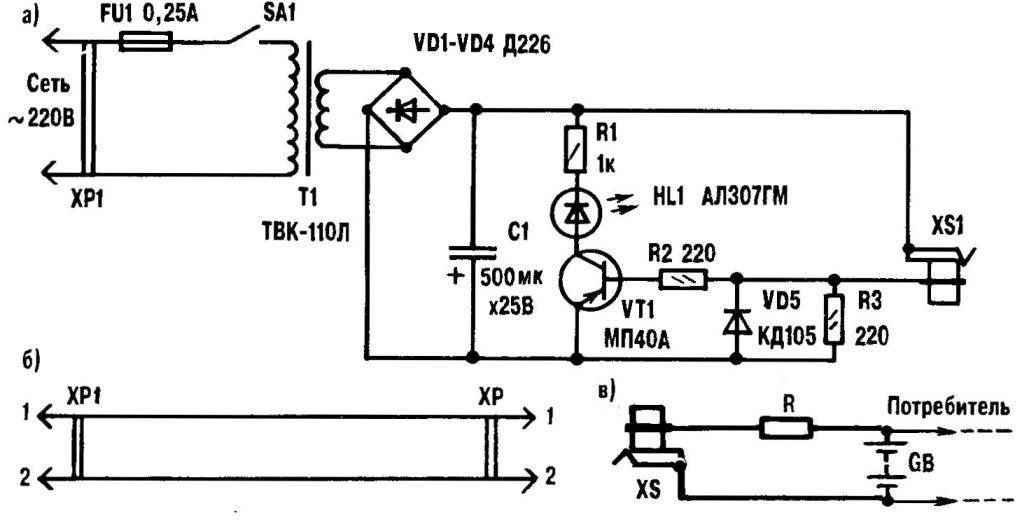 Homemade charger “Standard”:
a — e-block, b — connector cable with two plugs at the ends; — return (charger) part with a battery that didn’t need to remove from the body of the consumer.
As VT1, as practice shows, work great not only МП40А, but solid state triode series МП25, МП26, ГТ403. It is replaced and the transformer T1. Is specified in the scheme TVK-110L (television, from the tube of the cascade of vertical deflection) you can use any other (including the security) capable of providing the required load voltage and current.
Another feature of this memory is directly related to the used transformer. The fact that among the CA modellers are quite popular power supplies on the same TCE-110L, which was developed by Mongolian pupils and published in several journals (for example, “Radio” at No. 5 and No. 6 of 1981) and in the brochure “To help the radio Amateur”. Now, the owner of such BP may not collect a new universal charger, and additionally equip the existing unit required circuits. In this connector it is recommended to install directly on the radiator regulating transistor П213 (again, without the sealing-staples from the pad mount socket).
And, finally, the return(charging) of the proposed technical solutions. The main “highlight” here is that the elements that define the charging mode are set not in the memory, and in the device-the consumer of electricity. In the simplest case is the connector and the current limiting resistor. A place for those items are even in the miniaturized apparatus.
The calculation of the required resistor is (rounded to the nearest value) by the formulas:

where: N is the number of elements in the battery (PCs), — battery capacity (Ah), I is the resistance of resistor (Ohms), P is the nominal power dissipation (W).
Those who have to count several chargers, you can use the calculator BL-34 and the following program. 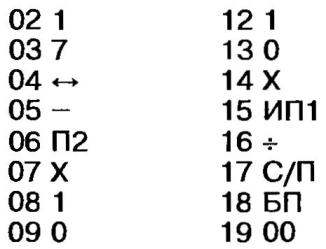 In the calculation, you must enter: the number of elements B1, battery capacity A*h/P| (e.g. for battery 7D-0,125 it will be like 7 [W 0.125[s/P).
After the end of calculation the indicator of the calculator displayed the desired resistance of the resistor. And power (in register Y) is extracted by pressing the key |”-“|. 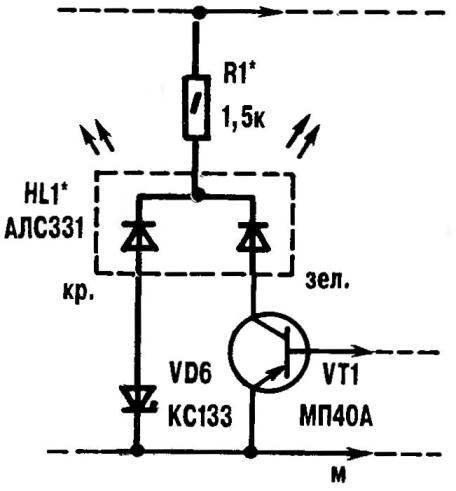 An improved indicator charging current.
In the presence of seven elements in the battery, it is desirable (and with eight required) instead of resistor to solder in the scheme of current stabilizer (made, for example, FET). Otherwise due to the increase of the charging voltage the current will decrease significantly.
Rules for the use of the law of Ukraine “Standard” is simple. Not thinking about any polarities, currents and voltages, connecting with the consumer via cable, include up the unit and put the batteries on charge. Charging time is 12-15 hours (for a fully discharged power supply).
Anyone can make their memory even more effective by replacing the considered indicator of the charging current to the improved. The signal about the scheme here takes the already not led АЛ307ГМ, and a special Assembly АПС331: in the absence of charging current — red, in the presence of green.
A. LISOV,
korotkovolnovoi observer
(IAP-123-008),
Ivanovo