“Slavutich-M1” is a hybrid of conventional hang glider and the trike. Constructive simplicity, light weight, collapsibility, balance management principle and availability of the engine significantly expand the scope of this ultralight aircraft.
According to the scheme M1 — flying wing braced type three-wheeled trike and pusher propeller. The choice of such a layout is dictated by the following considerations.
First, the line of action of thrust of the rotor passes near the center of gravity of the apparatus or slightly below it, creating Cabriole moment. This is desirable: for engine failure, the motor automatically switches to planning mode, reducing the flight angle of attack. A tricycle landing gear makes takeoff and landing, including an emergency, safe.
Secondly, the trike allows you to increase takeoff weight — increase” the capacity and the useful efficiency.
Thirdly, by installing the soft seat provides more comfortable conditions for the pilot while maintaining a balance control. 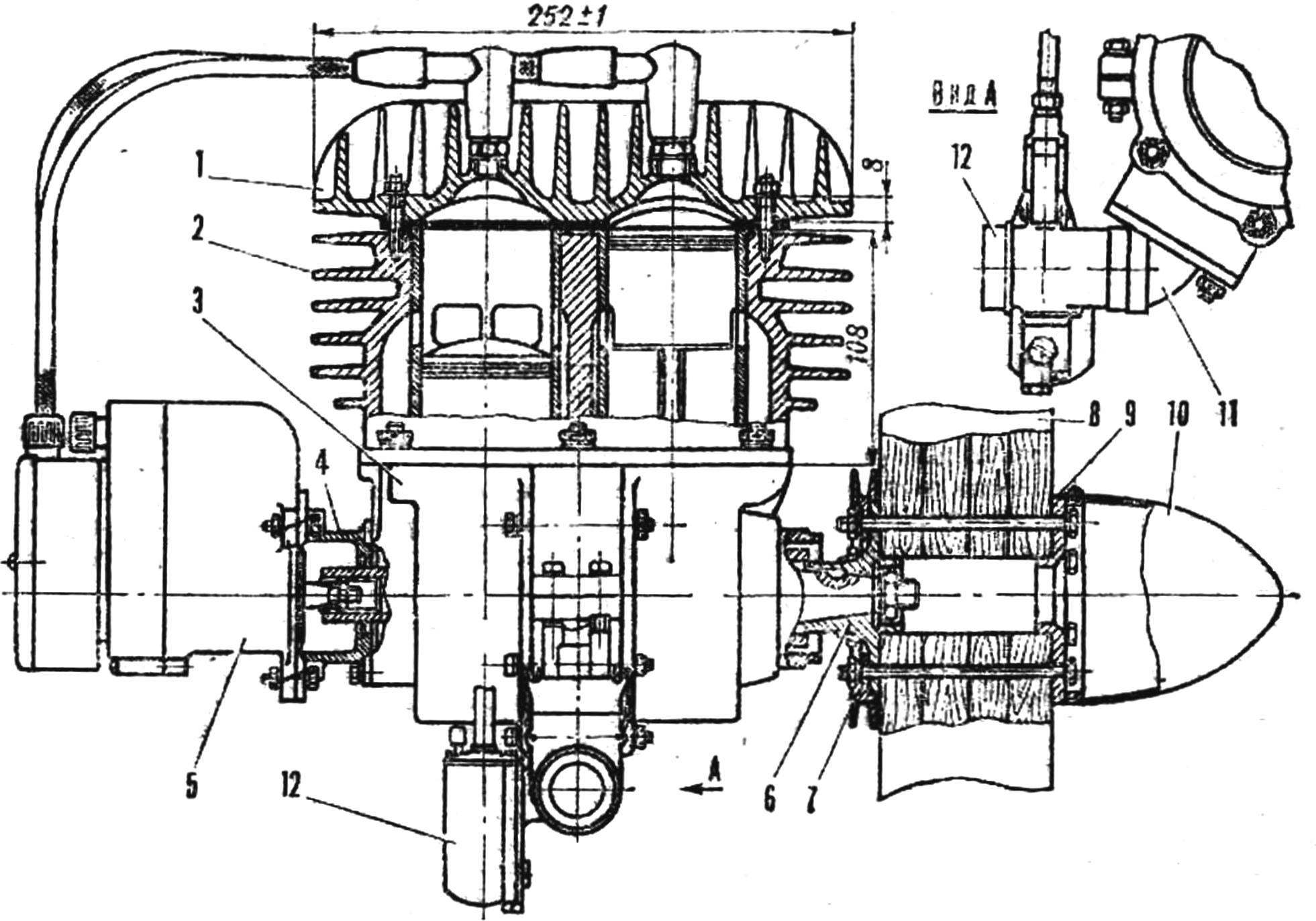 Fig. 1. The layout of the engine:
1 — cylinder, 2 — block, 3 — Carter, 4 — adapter flange, 5 — magneto, 6 — bushing of the propeller 7, the starter pulley, 8 — propeller, 9 — spacer, 10 — fairing, 11 — inlet nozzle, 12 — a carb.
And finally, fourth, “Slavutich-M1” structurally simple and convenient and operation. Added to this is that the trike is suitable for its ground transportation.
As the wing used serial training “Slavutich-UT”. Main power elements of its design are reinforced with pipes made of D16T: lateral spars — internal Ø 40×2 springs and Ø 36X2 in areas with peak bending moment; keel and transverse beams — the bougies, respectively Ø 40X2 and Ø 39×1.9. Take keel beam is strengthened at the place of installation of the rear lower cables offset at 500 mm forward for ensuring the gap between them and the air screw. Diameter side bottom of ovalicin cables to 3.5 mm (instead of 2.5 mm on the production model). The bearing channel of the Central unit is extended more possibilities for balancing.
the neck trapezoid is mounted combined handle control of the glider and the engine that allowed to increase the range of variation centrosim. The trike is suspended from the wing at the same point on two-step hinge. The rest of the wing of the hang glider “Slavutich-UT” no changes.
Trike truss-bracing of konstruktsii made of D16T tubes. The elements of horizontal triangular frames have Ø 40×1,5; vertical — Ø 40×2. The axis of the fixed wheels chassis made of tube Ø and Ø 40×2 45×1,5. Horizontal and vertical closed frame power frame of the seat. The seat is sewn from avizent and reinforced nylon ribbons and foam rubber; it has a tethered straps with quick-release lock fixing. For greater rigidity and reliability of the vertical frame associated with the adjustable horizontal braces of Ø 2.5 mm. 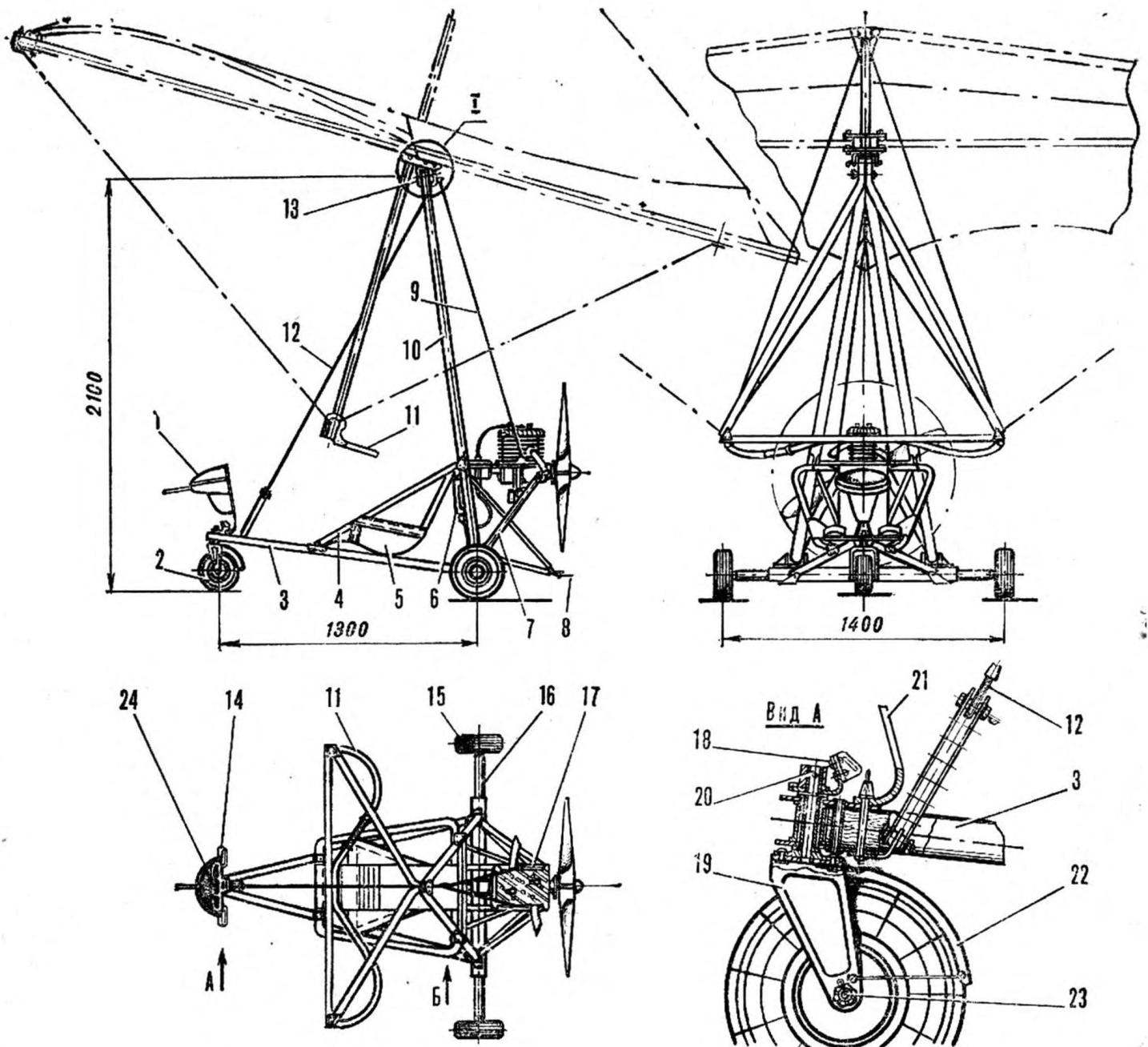 Fig. 2. Trike:
1 — the instrument cluster, 2 — nose wheel, 3 — horizontal frame, 4 — frame the pilot’s seat, 5 — seat, 6 — tank, 7 — brace motor, 8 — safety foot, 9 — rear ropes, 10 — vertical frame 11 — combined grip control of the Gaza strip, 12 — bow rope stretching, 13 — the Central node of the wing, 14 — pedal nose wheel, 15 — main wheel, 16 rear axle 17 — engine mount, 18—lever pedal, 19 — fork of the front wheel, a 20 — axle fork, 21 — unit devices, 22 — plate 23 — wheel axle (bolt M14) set, 24 instrument panel, 25 — keel, 26 — connecting bolts M8 27 — cross-section tube, 28 — earring cardan, 29 — connecting bolts M6, 30 — power bracket.
All connections of frame elements — hinged, allowing easy fold trike.
On the vertical frame, behind the chair-mounted engine mount and safety support. The main landing gear wheels size 280х85 mm from the card. Hub stamped from sheet ДІ6АМ 2 mm thick, and they pressed the bushings with bronze bearings. The front landing gear wheel 200×80 mm — installed in the rotary plug and is directly related to the control pedals.
Depreciation during takeoff and landing due to the elastic deformation of the structure of the trike and the tires of wheels. Brakes do not exist.
Powerplant boat day the engine “Neptune-23”, converted to air cooling. The cylinder block is cast from alloy АЛ9 excavation in the form of a wooden model, then machined, dispersed and milled. He pressed in iron cylinder liners.
The head block is also cast in АЛ9. The crankcase and crank mechanism with pistons reworked. The crankshaft is deployed in relation to the crankcase by 180°. To force the tapered toe shaft mounted bushing of the propeller and the shaft, through a splined coupling and adapter flange – disk, magneto “KATEK”.
The fuel system is left unchanged. Carburetor K-36 is attached to the crankcase angle bend, providing the horizontal position of the float chamber.
The propeller — SDV-1 TSAGI Ø906 mm by 400 mm. But because of the lack of gear (screw is secured by six bolts to the MB through the grommet of steel 90ХГСА directly and the output shaft of the engine) modified to maintain a sufficient coefficient of thrust: the blade widened twice. The design of the screw cased, cemented from alternating layers of Linden wood and beech wood and is reinforced with carbon n fiberglass. The ends of the blades cast in brass.
Engine control is the throttle of a motorcycle “Java”, associated in budenovskoy cable sheath and the throttle valve of the carburetor. 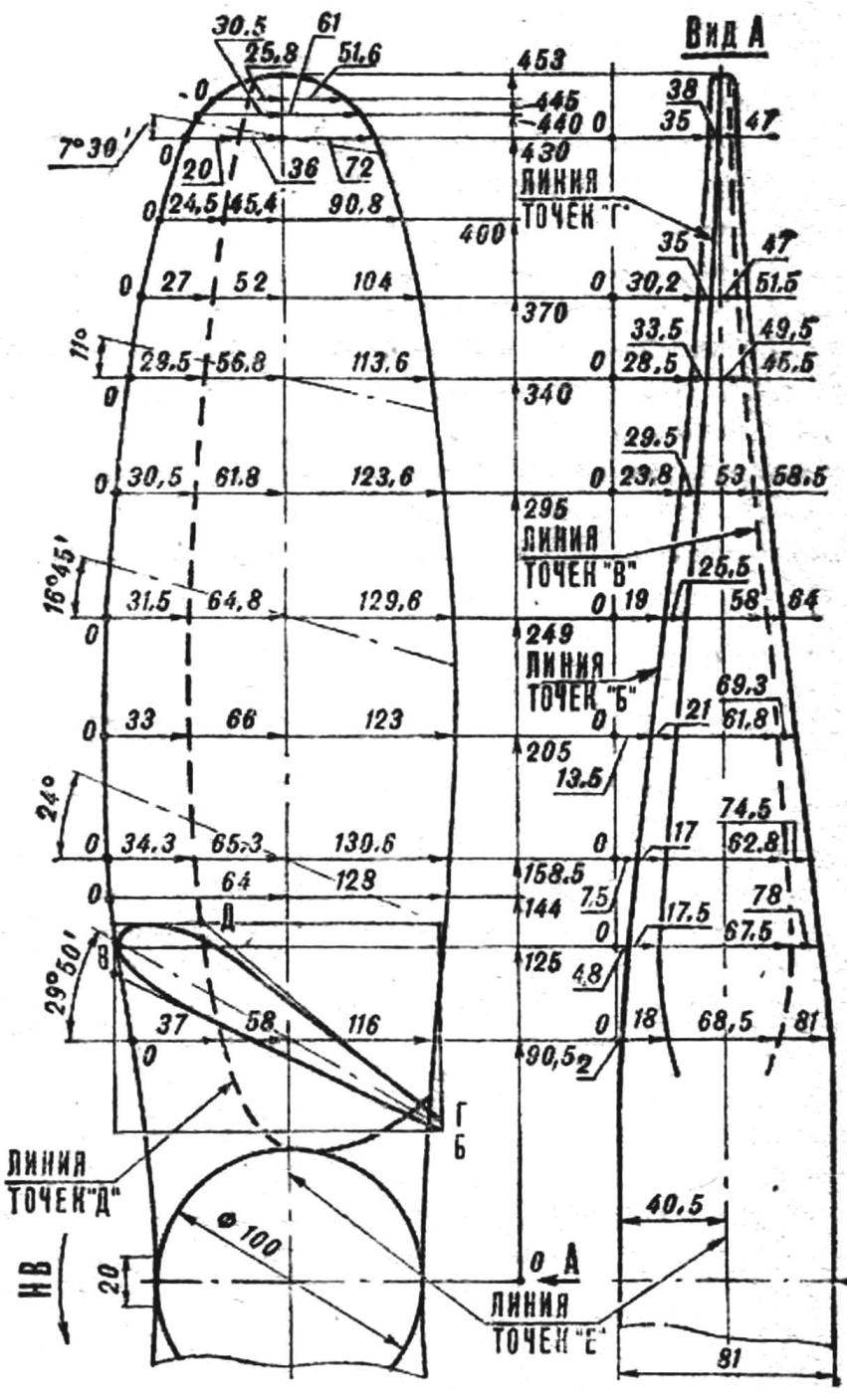 Fig. 4. Propeller.
The engine is mounted on Motorama transitional profiles based on four rubber shock absorbers.
Instrumentation includes an airspeed indicator LUN-1011, altimeter VD-10, Vario BP-10 and temperature gauge the cylinder head TCT-9. The instrument panel is mounted above the front of the chassis and closed lightweight fiberglass Radome. It also mounted toggle switches for ignition warning light and the critical angle of attack and minimum air speed. A barometric sensor devices is the forward tube of the Pitot — LDPE.
Range of operating limitations of the glider following: wind speeds less than 6 m/s, temperature from -10 to +25°, altitude of the aerodrome not more than 50 m above sea level, maximum takeoff weight must not exceed 180 kg.
The main performance characteristics obtained in the pre-test were broadly consistent with the estimated. Subject to compliance with the original data they account for; maximum speed 65 km/h climb rate 2 m/s, cruising speed 55 km/h take-off — 40 im/h (with a run of 20-30 m), landing — 45 km/h ( run 20 m), the ceiling is 500 m, distance 30 km.
A. KLIMENKO, O. BELOUS