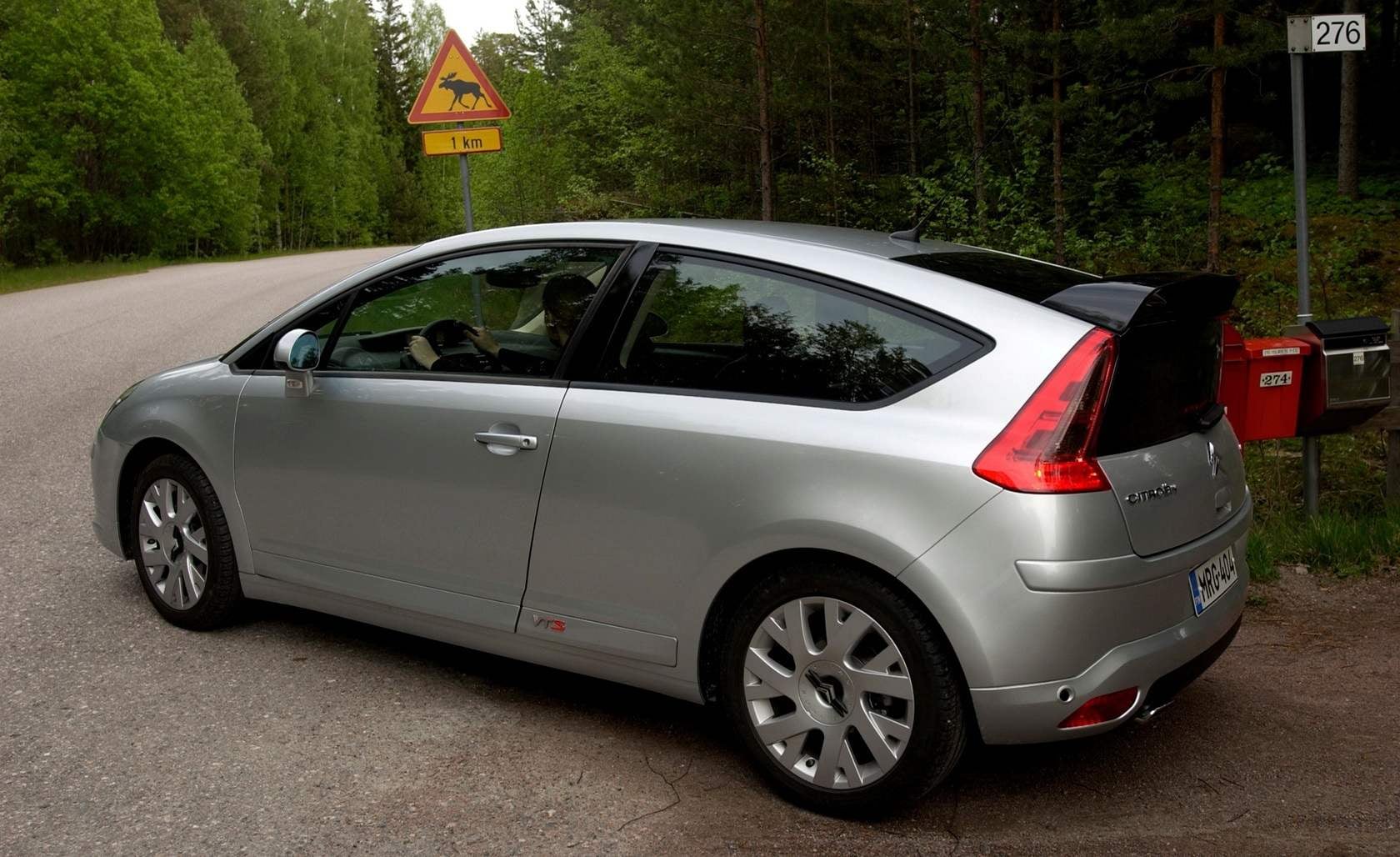 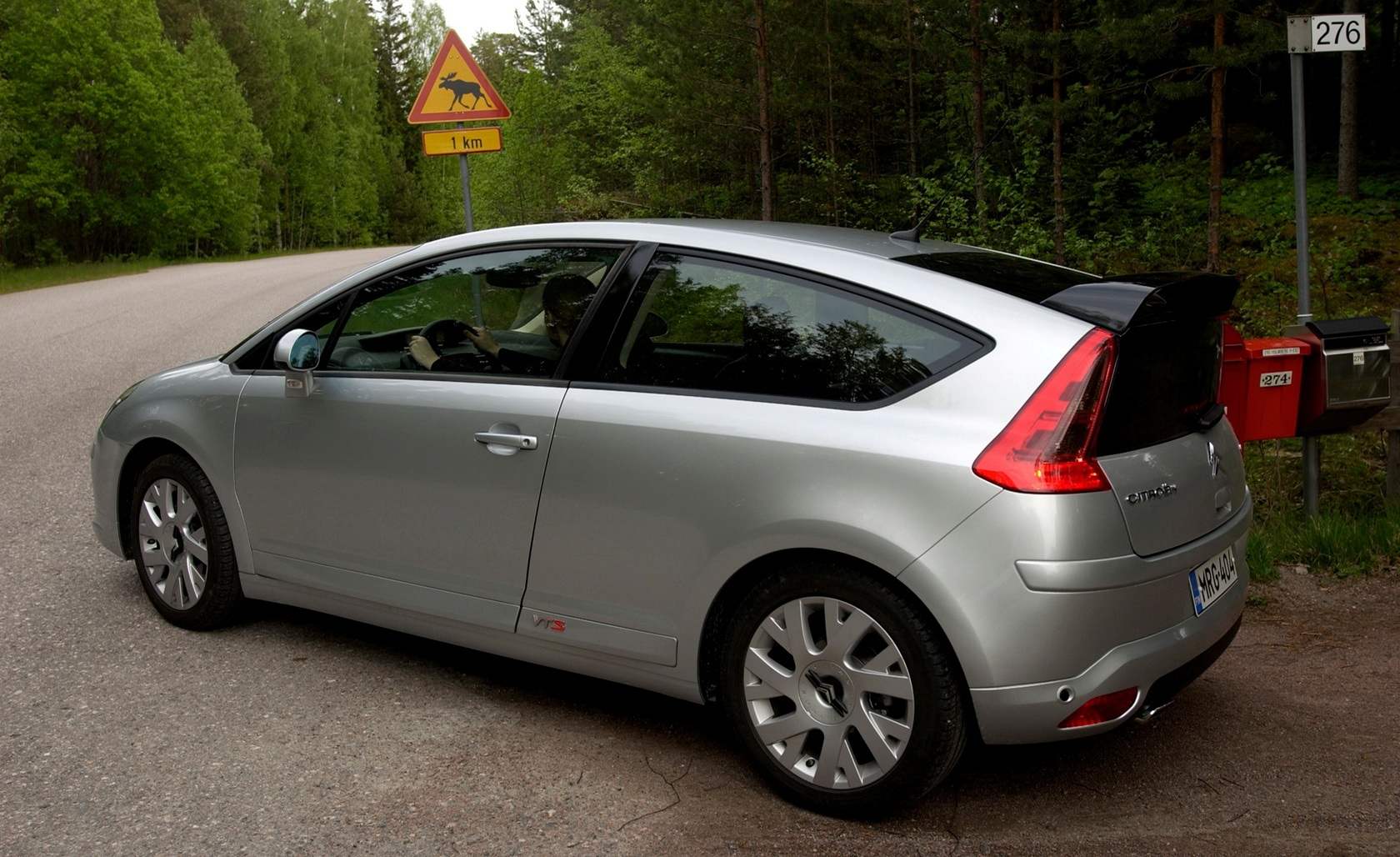 CITROEN C4 — new car-class Golf. Experts autostructure easily isolated in the flow of vehicles machine of a company, focusing on their unique appearance. Signature style is created in a variety of ways — from finding original and thus memorable silhouette of the car before designing fancy logos or easily recognizable false radiator grille specific forms. However, blind adherence to the chosen style again brings up the fact that models of different classes produced by one company, often differ from one another only in size.

Many firms produce cars, deprived of family characteristics is also a kind of style. But these eventually begin to return to interesting finds of yesteryear — designer half-forgotten masterpieces at the time, forcing buyers to distinguish among the dozens of cars the only one they preferred.
The latter include the well-known French company Citroen, until recently, did not have a pronounced corporate identity. She has released an interesting, very modern machines, which, however, almost did not stand out from the crowd cars-classmates.
But in the history of this company there was a stunning car that won in its time a gigantic popularity among customers. It was a compact car the CITROEN 2CV. The firm presented it to the public at the Paris motor show of 1948. Znakomitsja with her experts unanimously predicted the unsightly front wheel drive car with 2-cylinder “vent” working volume 0.375 l the fate of only a small episode in the production program of the company.
Much to the surprise of competitors, buyers literally flooded the firm with orders for the new car. The runabout has been repeatedly modernized and is available in 15 countries. In France, it was produced until 1990 for 42 years there were produced 5.5 million copies CITROEN 2CV.
About the kid “de shvo” (“two horses” as named by the French car) designers have been remembered in the twenty-first century. In 2002, the audience was presented a compact city car CITROEN C3. The French immediately saw in him a resemblance with an old man, “de shvo”.
Although C3 in the automotive hierarchy and is a step above compared to the 2CV, its release did not mean the emergence of the company Citroen’s own style. However, buyers are very well met the car, and soon (less than two years) for the first swallow arrived and the second CITROEN C4. The appearance of the new model had the same stylistic decision, and C3. It has been said of the appearance of Citroen’s own style. 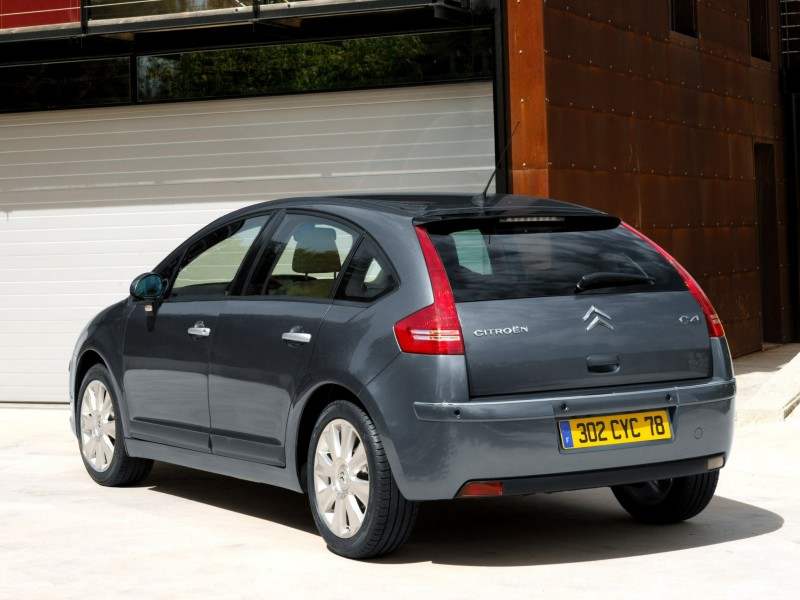 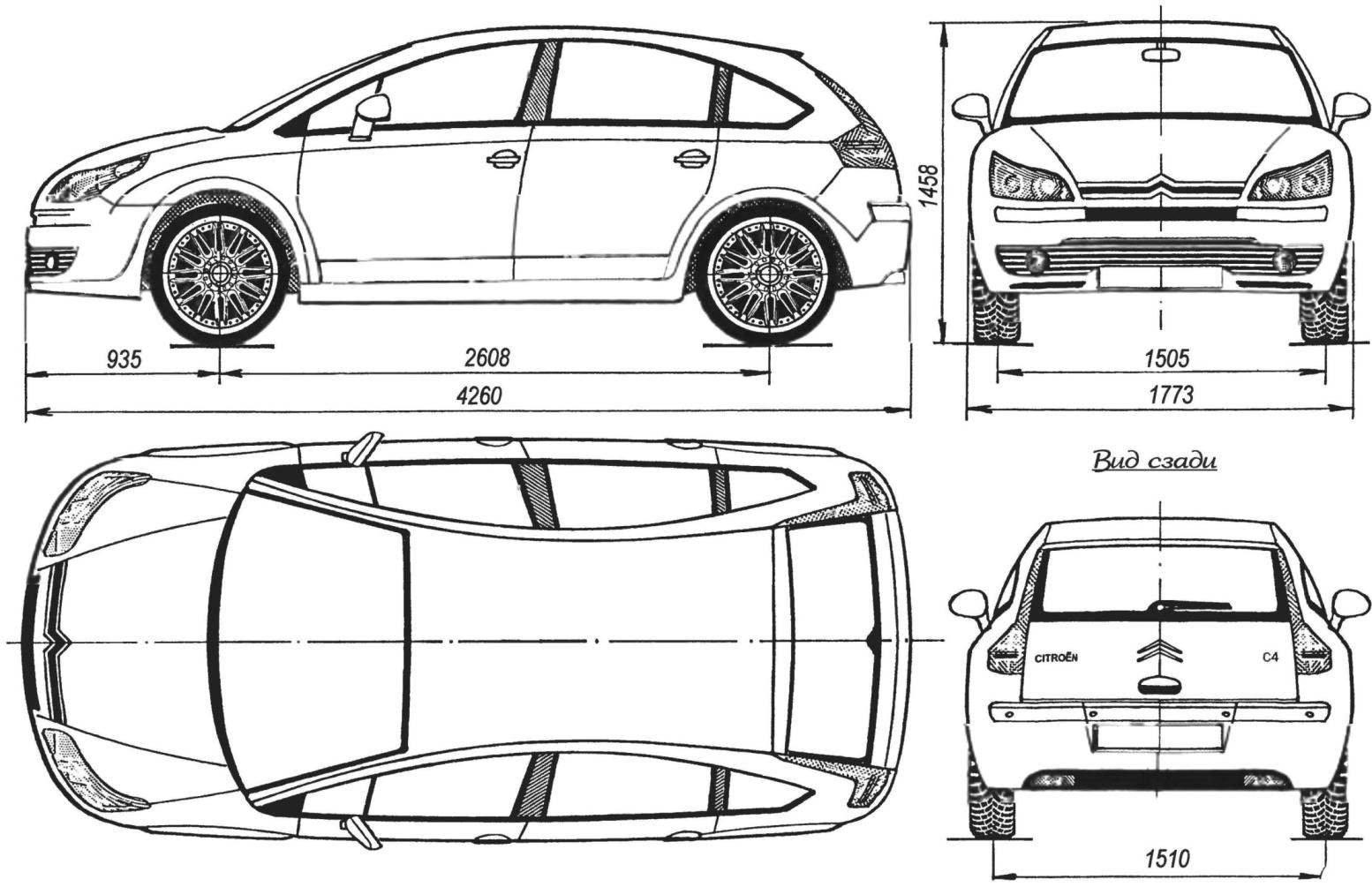 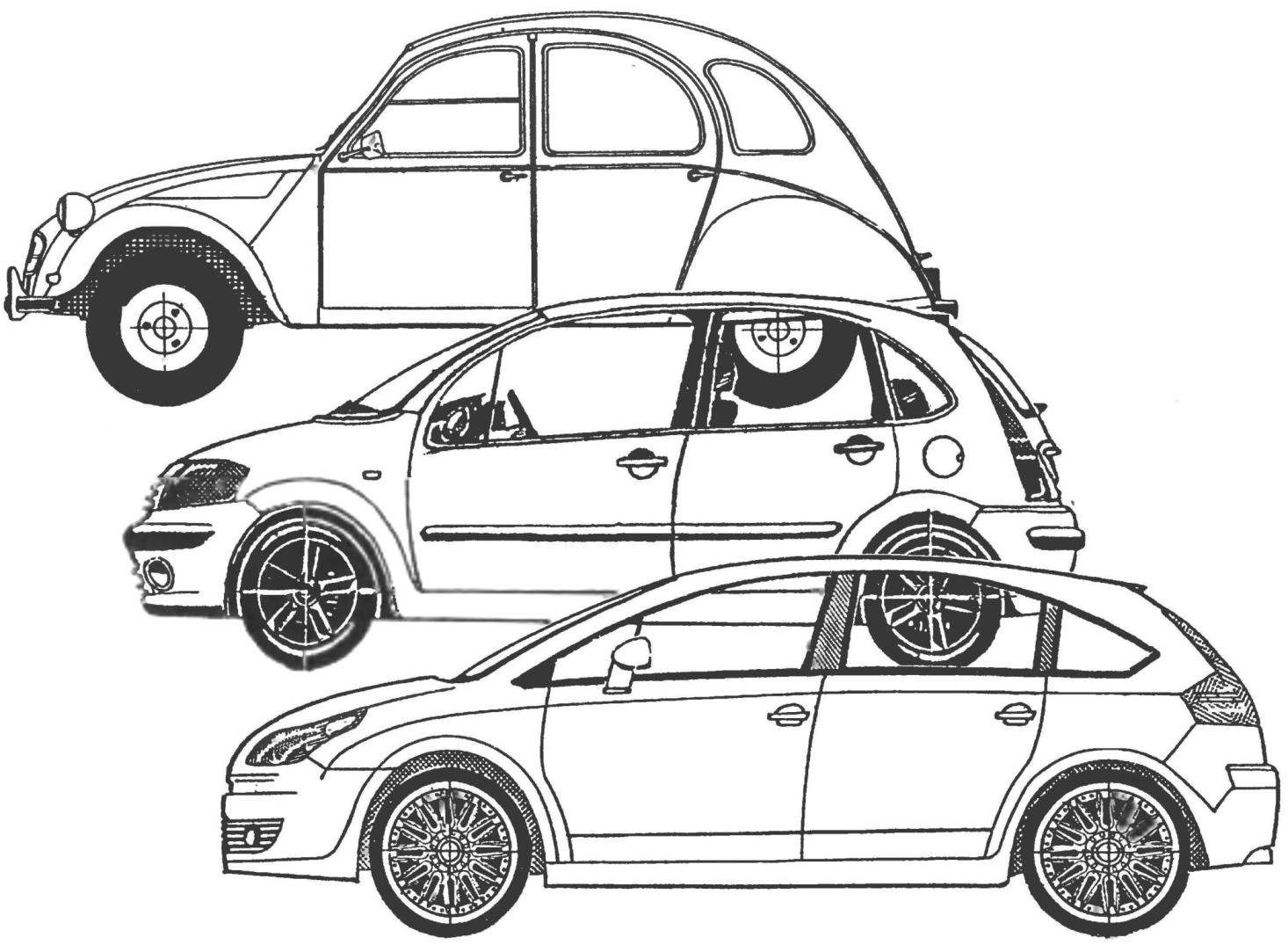 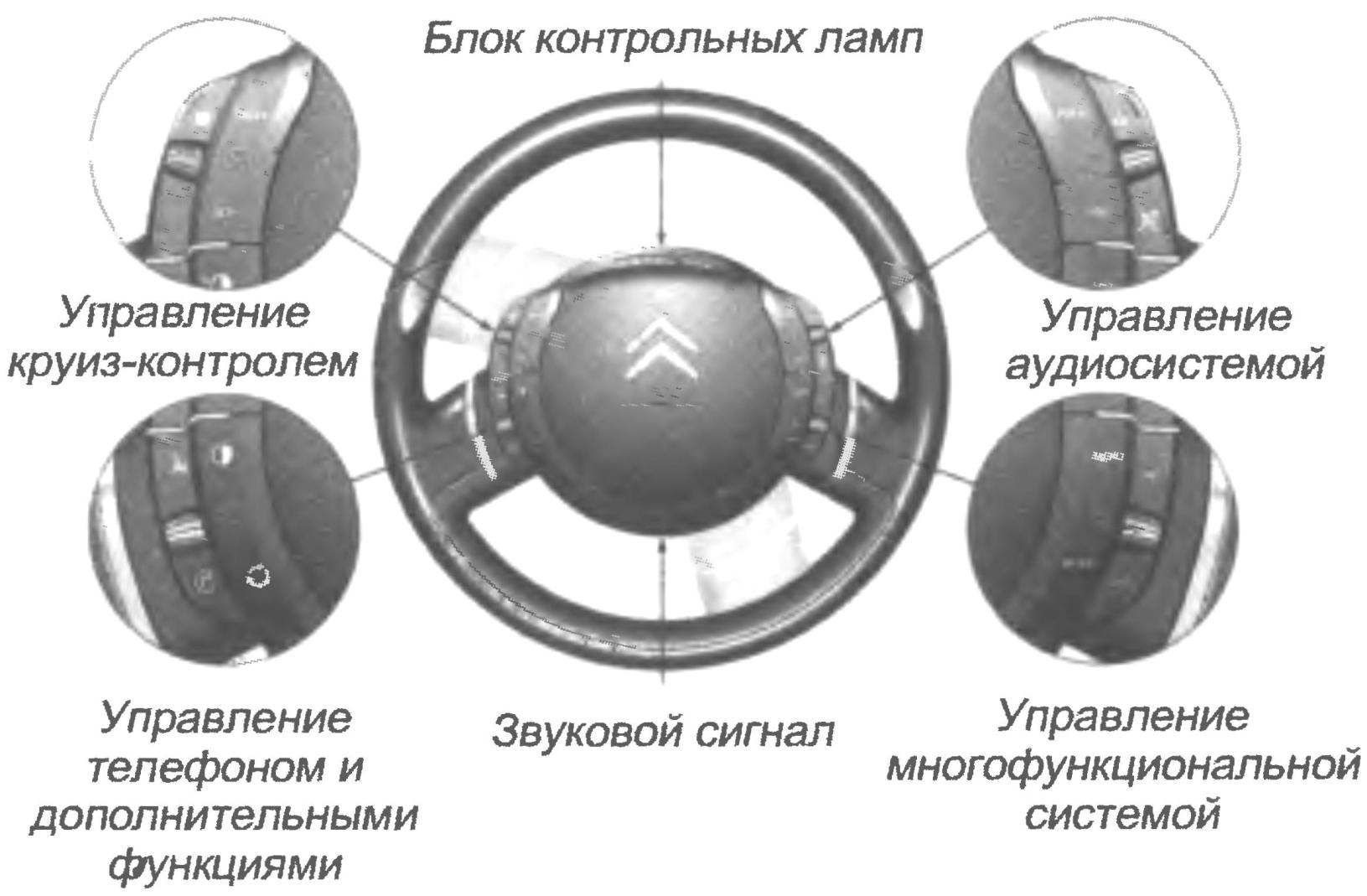 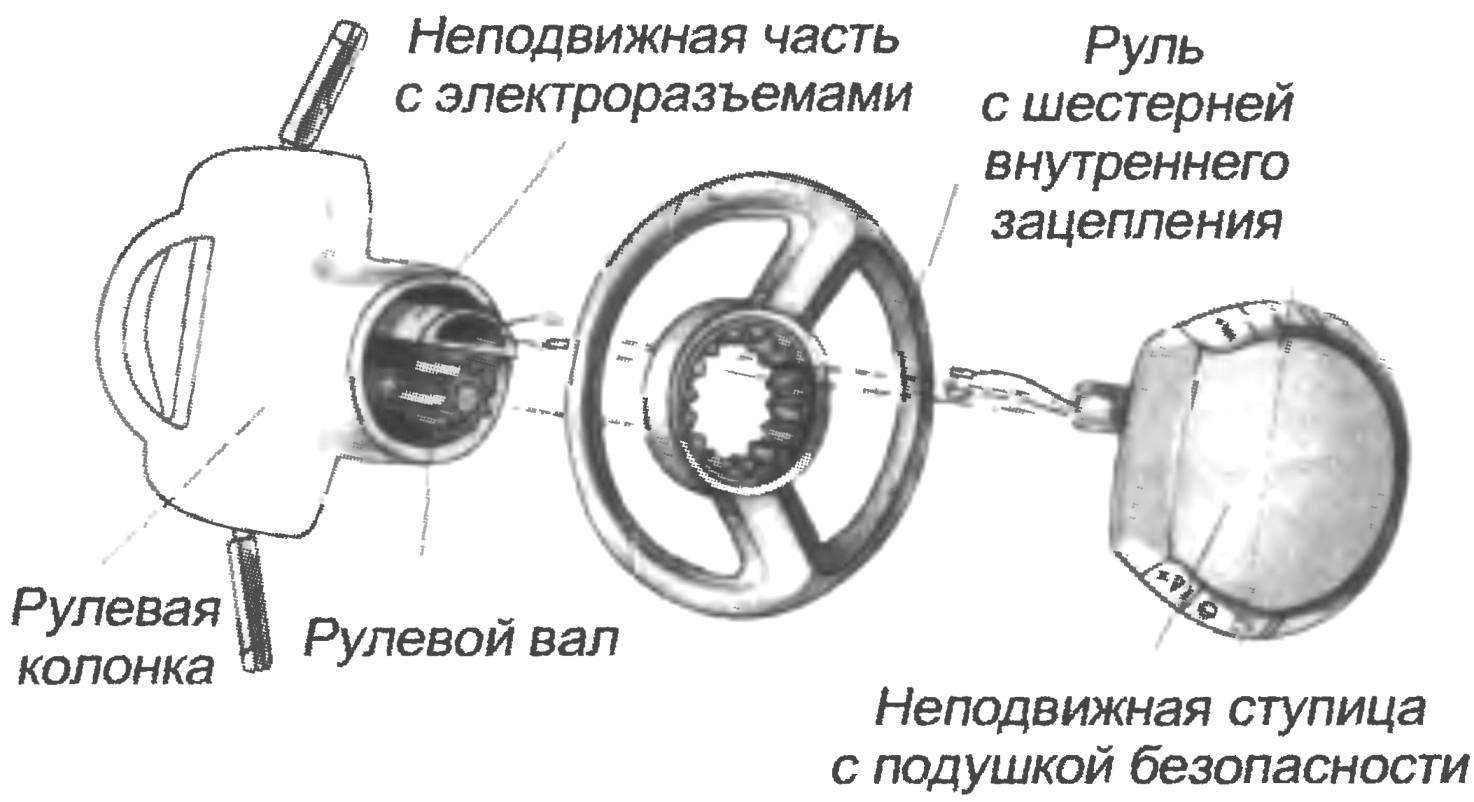 The device is a steering wheel with a fixed hub
The CITROEN C4 was created by the chief designer of the firm Jean-Pierre Plouay — under his leadership, the team of specialists of artistic design created for the new machine is very memorable appearance. The machine was designed in two versions — trehdverka coupe and five-door hatchback.
As is known, the efficiency of the vehicle largely depends on its aerodynamics. When designing the C4, this issue has been most serious attention — the designers managed to bring the drag coefficient to 0.28 of the body is the best indicator in the Golf class
When you create a car a lot of attention was paid to improving traffic safety and I must say, the designers managed to equip the C4 is a very original system.
The most interesting is the device AFIL, which informs the driver about involuntary crossing of a vehicle longitudinal lines. The “eyes” of this system are the six located under the front bumper of the car, infrared sensors that continuously “scan” the road surface. When rebuilding of lanes at speeds above 80 km/h the driver does not turn on the turn signal, then starts to work one of the two vibrators embedded in the seat cushion right — if the car crosses the line marking the right and left — if the car when driving to his left.
The interior is unusual in many respects. The most striking the steering wheel with a fixed hub — this design made it possible to combine in one place a significant portion of the management bodies. While the control keys are divided into four functional zones — controls for audio, cruise control, navigation system and car cellular phone. Built-in hub airbag pear shaped protects not only the head but also the chest of the driver (airbag, by the way, C4 up to six!).
On the front panel are five information displays. The main display is set in the centre of the dashboard, under the windshield — it displays information about the machine speed, fuel reserve, coolant temperature. The brightness of the screen changes depending on the light in the cabin. 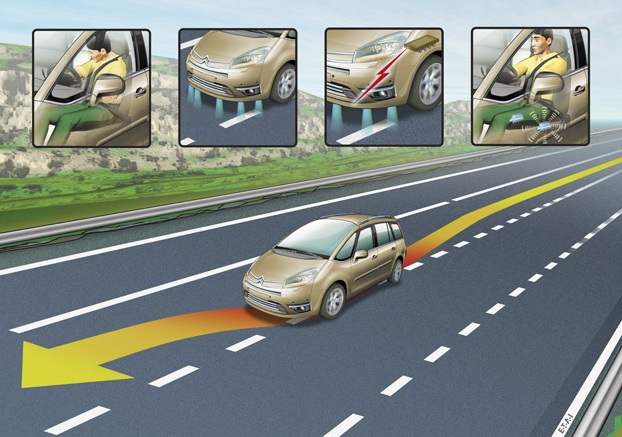 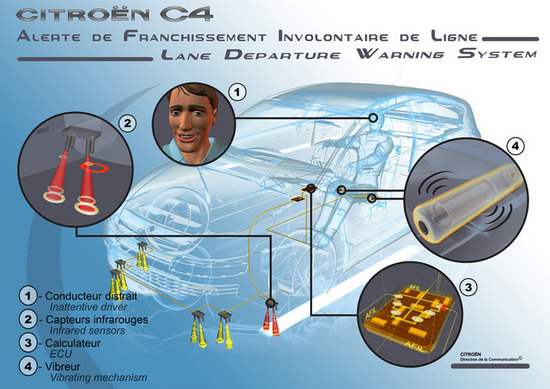 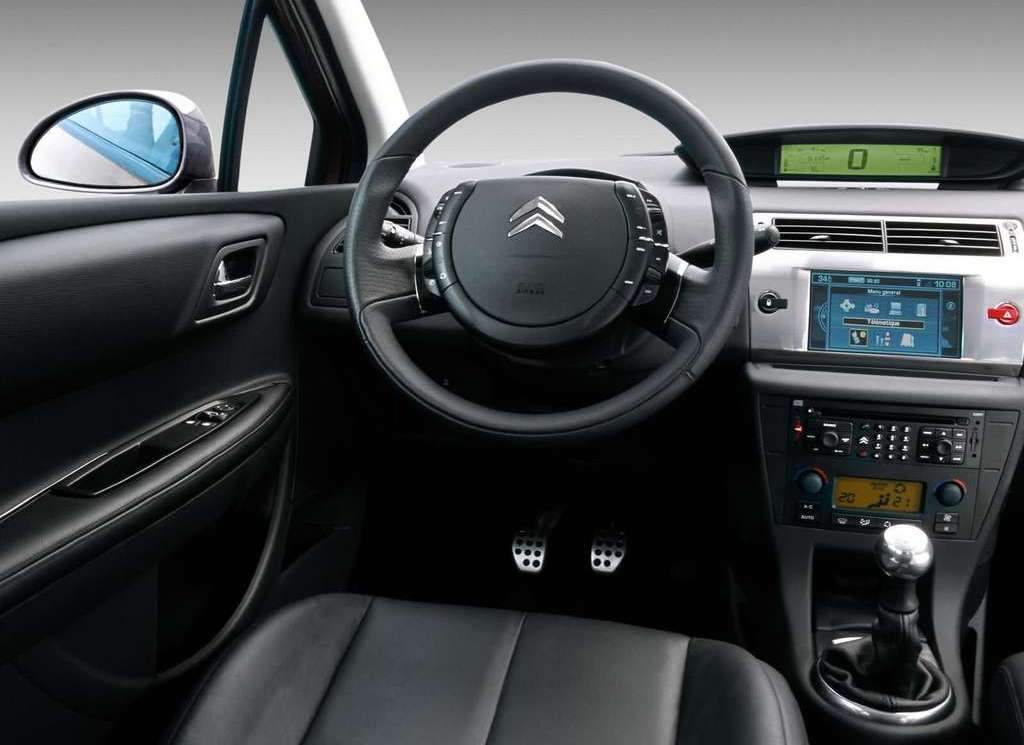 The front of the cabin of the hatchback CITROEN C4 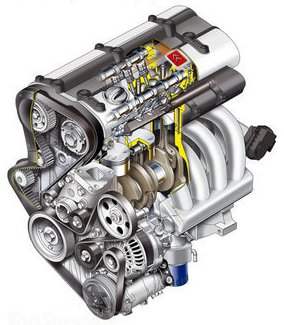 Two of the eight engines, which are equipped CITROEN C4: diesel 180-strong (left) and a 138-horsepower (on the right)
Below, on the front panel, is a display of the navigation system. Even lower on the Central console display unit separate climate control. On top of the steering column directly in front of the driver is the tachometer display, reminiscent of the gauge with yellow stripes instead of the arrow; when the engine revs exceed the limit, the screen starts flashing red. And another group .indicators located in the upper part of the fixed hub of the steering wheel — there are warning lamps and high beam, hazard and turn signals.
It should be noted that since the mid 1970-ies firm Citroen is part of PSA group, together with no less famous company Peugeot. That is why all modern models Citroen releases on the corporate platforms. In particular, the CITROEN C4 is produced on the PF2 platform— one that served as the basis of the PEUGEOT 307. That’s why the C4 suspension is almost the same as the PEUGEOT 307. Front — independent, to guide the spring strut (type MkPherson), rear — spring semi-independent with torsion cross member. 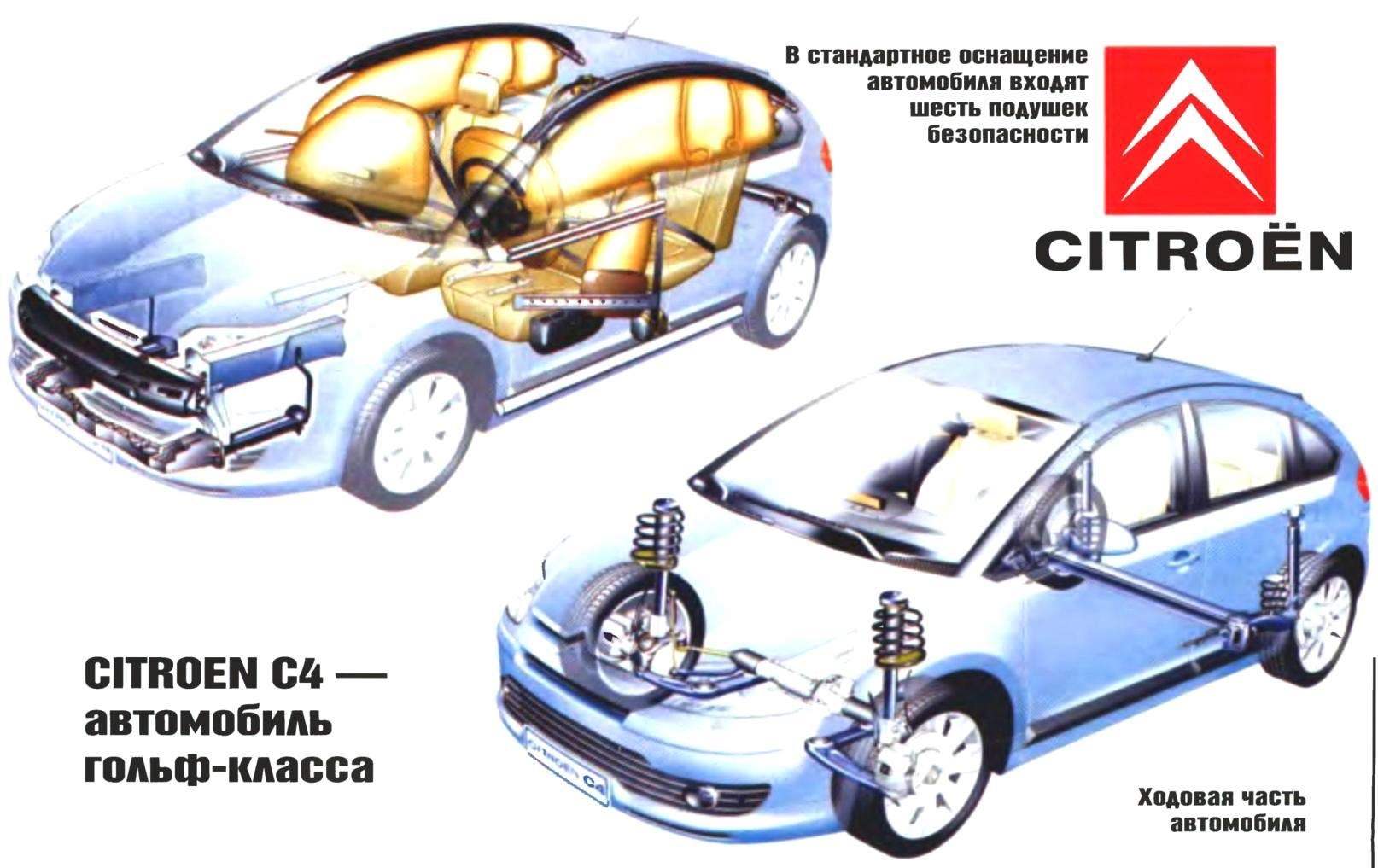 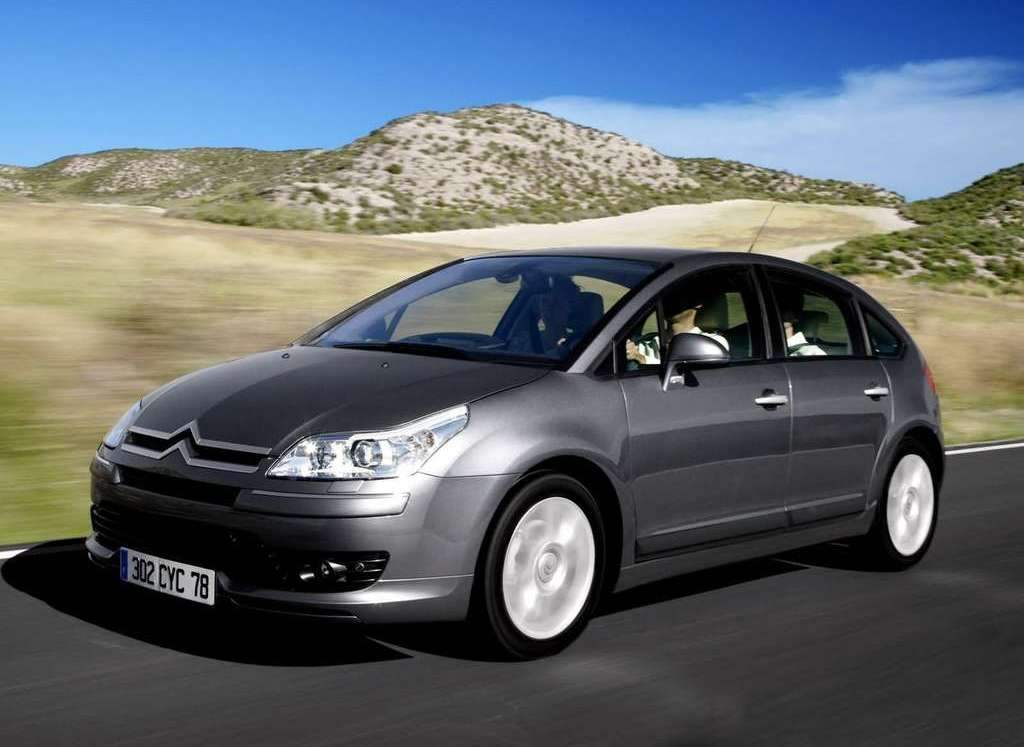 The superstructure of the platform РF2 introduced additional security elements, such as extenders of front side members to improve energy dissipation in a frontal impact. The front bumper contains cellular elements, reducing the possibility of damage to the legs of a pedestrian hit by it. And design aluminum hood created so that it folds under the weight of a person is safest for him.
Steering — electrohydraulical, which is adjusted depending on the vehicle speed and rotational speed of the crankshaft of the motor.
The basic gasoline engine for the C4 is a very modest 1,41 16/ 75 HP Machines can also be equipped with turbodiesel power 92,110 and 136 HP in Addition, the five-door Citroen C4 can be equipped with 2-liter engine producing 138 HP and a three-door — 2-liter 180-horsepower gasoline engine with variable timing on the inlet.
Technical characteristics of the car CITROEN C4 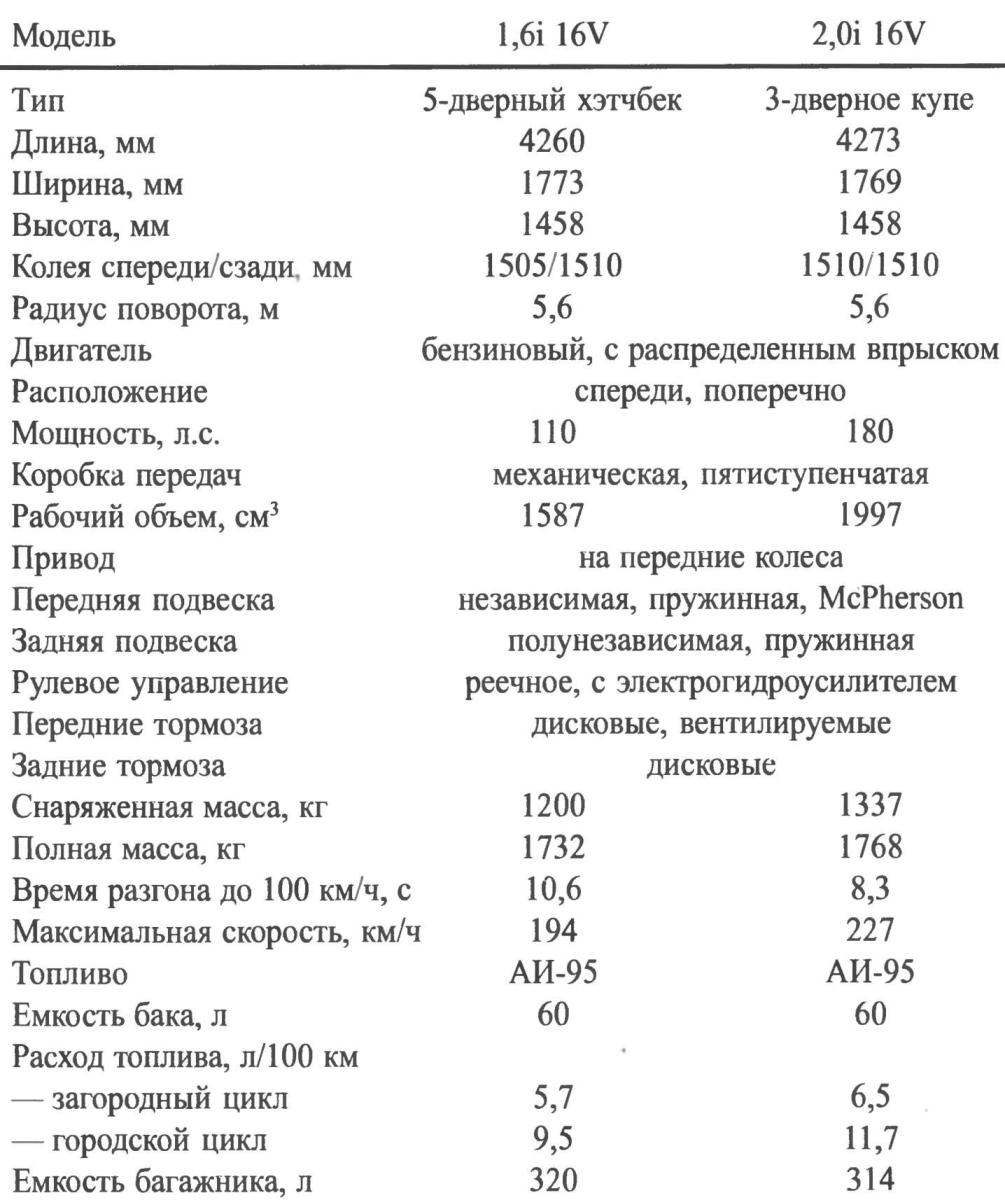 And the latest innovation of saratovtsev, which, however, should be attributed rather to the curious. Almost the first time in the history of the automotive firm Citroen has started to equip their cars with a special device that can aromatize in the cabin the air is one of the nine flavors, specially designed for the C4 perfume company Robetat Among them lavender, mint, bamboo, Jasmine, Mimosa and other odors. Dispenser of air freshener is mounted in a duct of the ventilation system with the help of the handwheel opens one of the nine bottles of flavoring (by the way, it lasts for about two months) and the interior is filled with the gentle scent of sandalwood… Allergies and asthma to touch the handwheel flavor is not recommended!
The new CITROËN C4 launched in the series and already went on sale. The cost of a five-door hatchback with a 1.6-liter engine in Russia starts from 13 900€.
I. EVSTRATOV