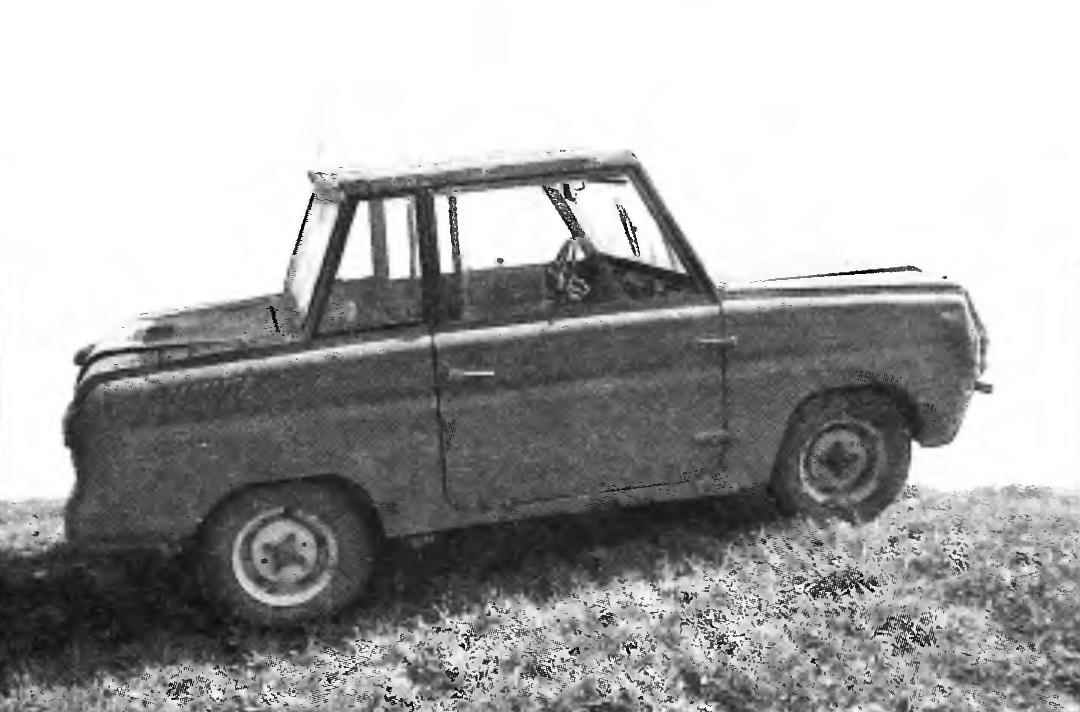 I was born in 1944, and almost from the first year of life I was haunted by a sound — an ominous growl bearings rolling on asphalt. The sound that accompanied the movement on a small wooden carts returned from the war disabled legless…

And at that time was a lot — according to current estimates, over three million. The majority of former fighters of order-bearers disappeared in the vast expanses of our country, but many settled in cities, including the capital of our country. And their only vehicle was at the time knocked together from planks truck with ball bearings, equipped with a pair of rough, reminiscent of the iron wood, which the disabled, starting from the road, causing her to move…

The first motorized three-wheeled wheelchair “from Kiev”, made on the basis of 98-CC motorcycle

with the same title, resembled a two-seater sofa, to which they gave the front of the motorcycle. However, instead of steering a motorcycle, the driver of the tricycle used a long lever. The speed of the hybrid, are not protected from unpredictable external environment, does not exceed 30 km/h.

The next, more comfortable, a scooter, dubbed С1Л, was designed in the CDB of motorcycle. Serial production of this vehicle was deployed on the Serpukhov motorcycle plant (SMZ). 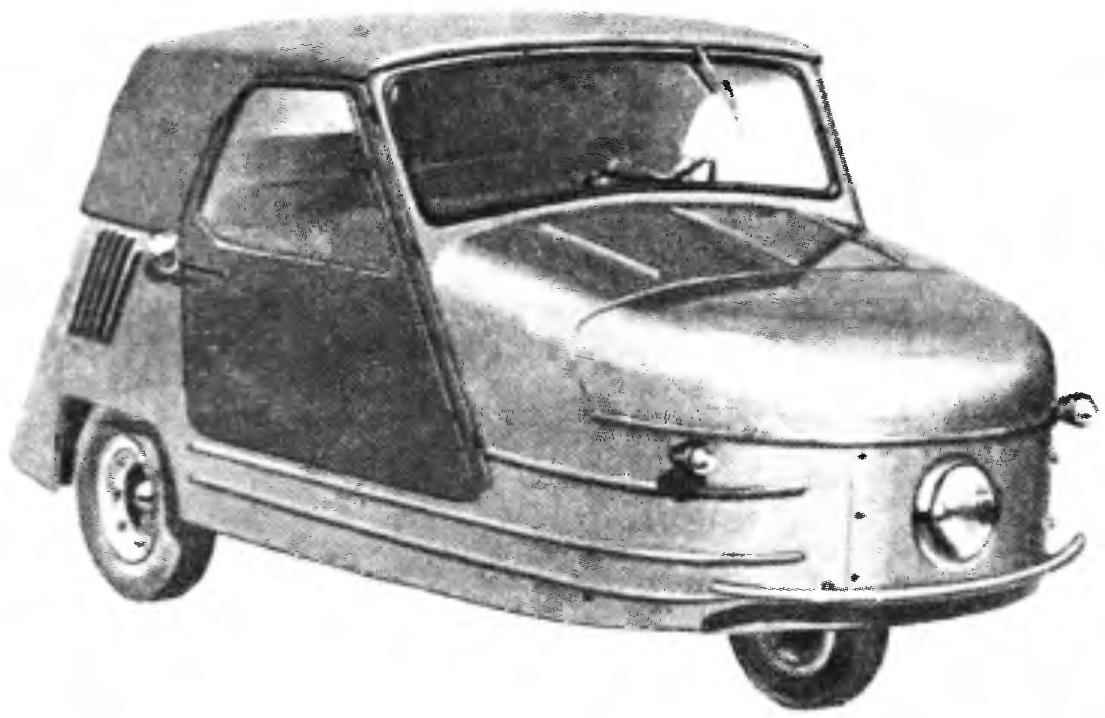 A little historical background. SMZ has started its activity in 1939. At first, it released a small series of domestic motorcycles type MLZ and J18, and during the war organized the repair of captured German motorcycles and the Assembly of those that entered the country under lend-lease — American Indian and Harley.

Double three-wheeled microcar С1Л strikingly different from the “Kiev” — it had a metal body with a pair of doors and a folding canvas awning that protected the crew from the weather.

The body of the sidecar was welded from thin-wall pipes, on which was mounted a steel panel. Rear suspension is independent, spring, on wishbone. Wheel — tire size 4,50 — 9. 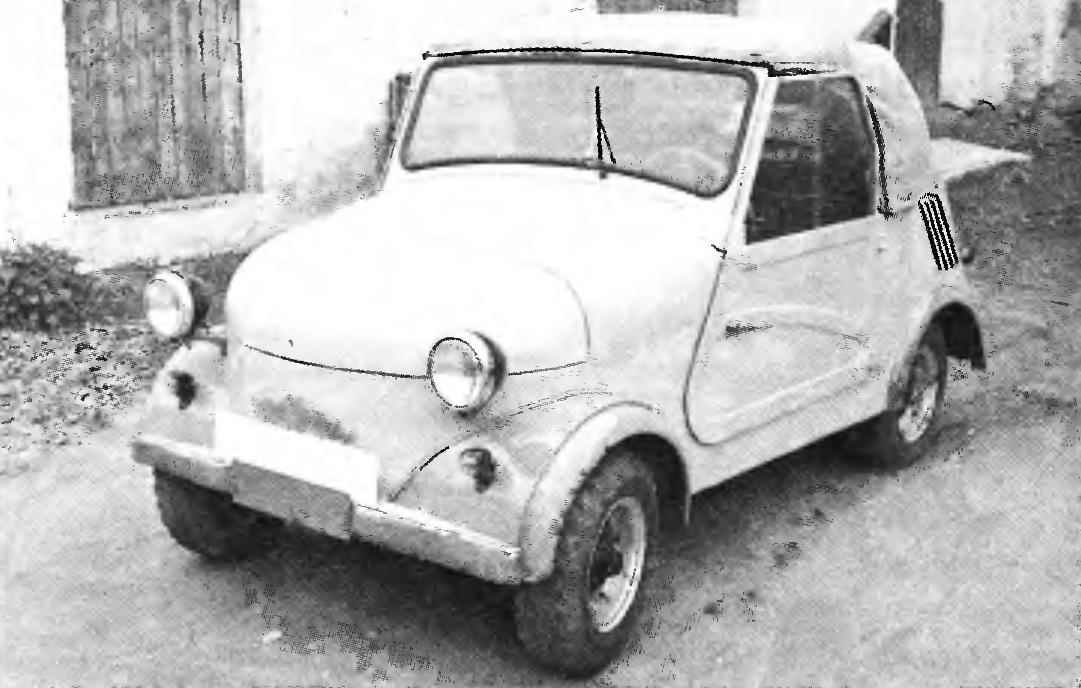 Engine — motor, two-stroke, cylinder capacity of 125 cm3 and a power of 4 HP… — it is barely enough to disperse the car with a mass of 275 kg to a speed of 30 km/h And move a three-wheeled car on a dirt road off the beaten track two was almost impossible. And the stability of the sidecar — especially on turns — left much to be desired. It was unimportant — only one 6-volt headlight.

In 1957 in the design Department SMZ together WE have developed a more modern scooter with beyond — in the series it launched in 1958.

The new car was made four-wheel, with a tire size of 5.0 — 10 and the torsion bar suspension of the front wheels is the same as the VW. The elastic suspension elements — torsion plate — was located in a transversely mounted cylindrical housing that is welded to a longitudinal tubular side members of the frame. To them were attached and wishbone independent suspension rear wheels with friction dampers. 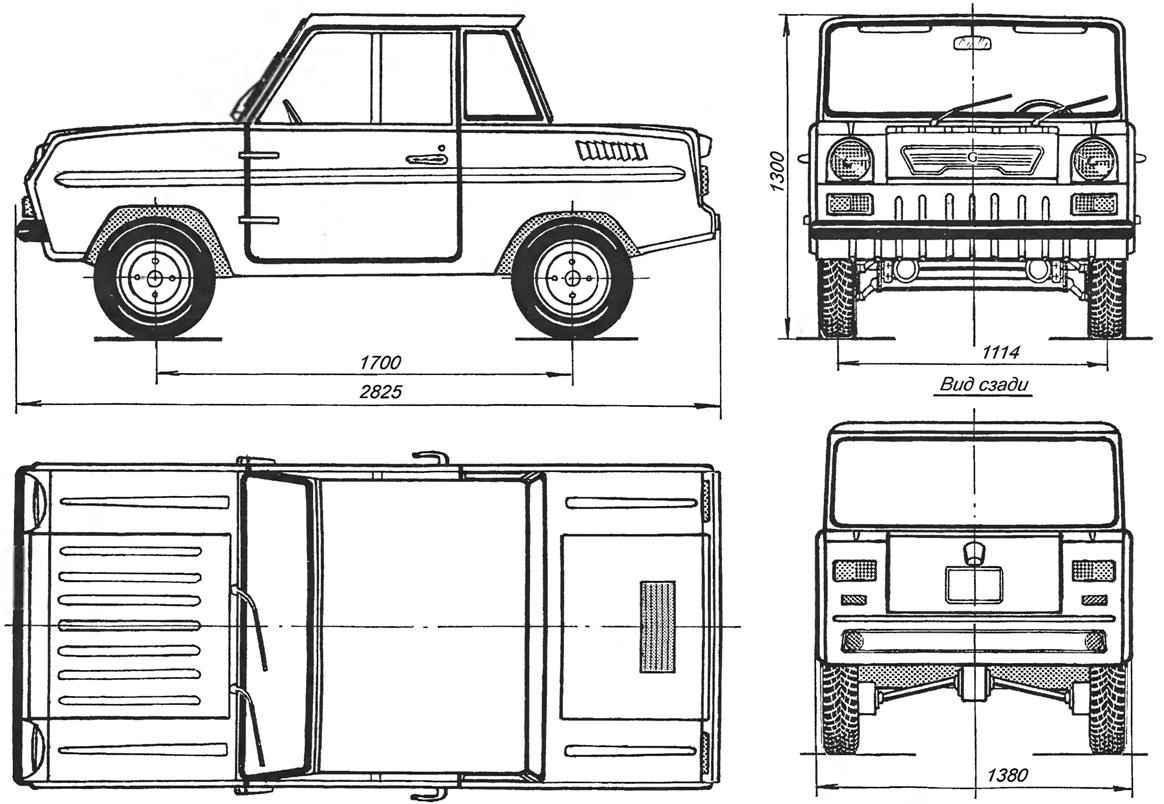 The principal dimensions of the sidecar FDD.

Power unit — two-stroke motorcycle engine IZH-49 in unit with a four-speed gearbox was located in the rear of the body. The motor was equipped with an air cooling system consisting of a centrifugal fan and metal casing. Engine start was carried out using the electric starter, however the engine could also be created manually using installed in the cabin of the lever of the starting device.

By the way, two-stroke engine, SZA consume no fuel and fuel mixture of gasoline with an octane rating of 72, and oil brands as-8 in a ratio of 20:1, which created additional difficulties at the time and gasoline to buy was not easy, but to get butter even harder. 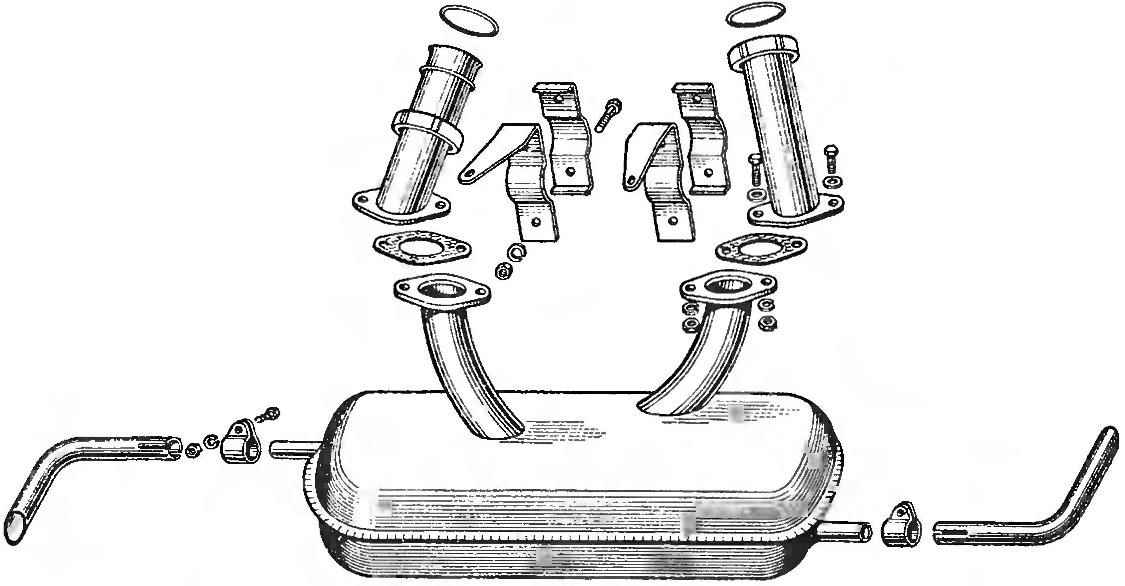 Brake the sidecar was manual, with a mechanical rear-wheel drive.

Curb weight of the sidecar was 425 kg, which was too much for desyatiletnego of the motor, so the maximum machine speed was only 60 km/h. Despite the small capacity, the engine consumed about 5 l /100 km. 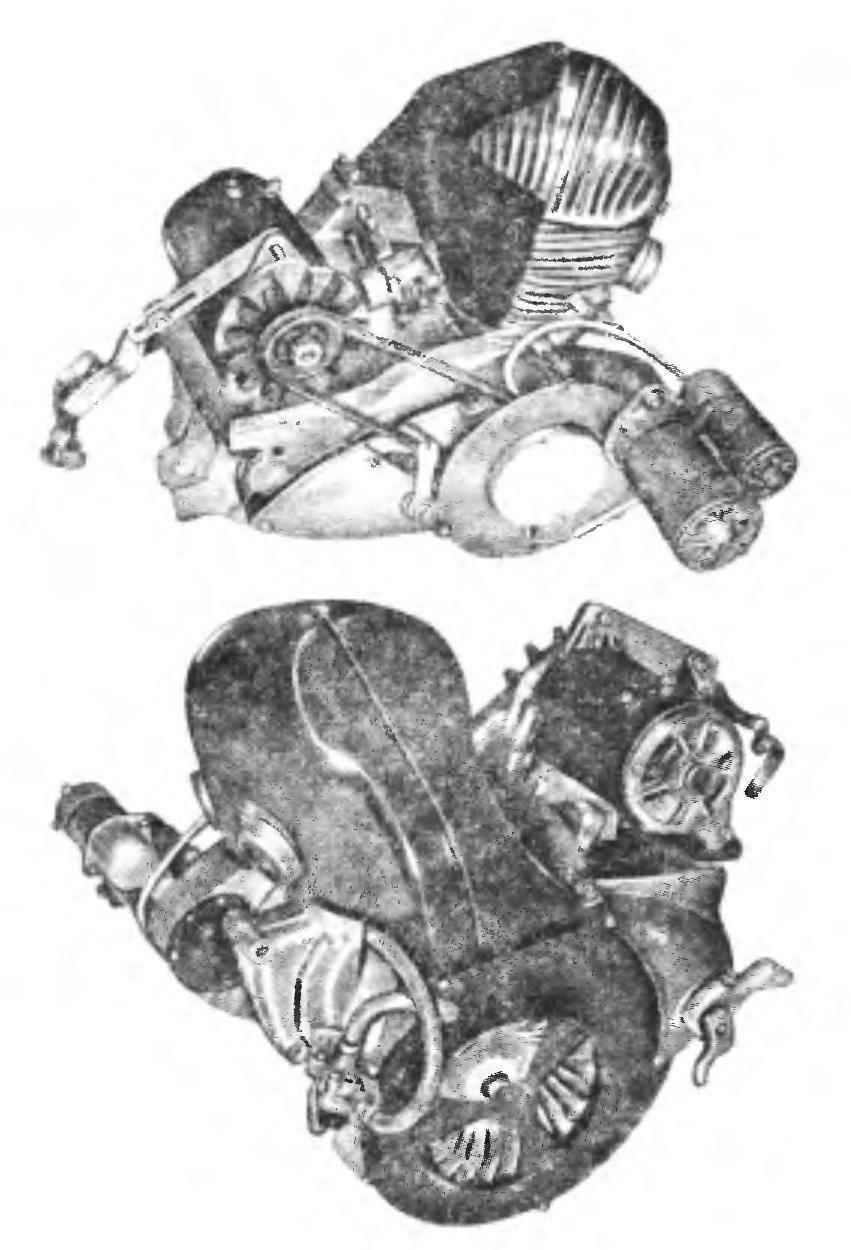 When you create a sidecar it was assumed that the cost of specialized wheelchair of machines that the social security authorities have circulated among people with disabilities free of charge, will be small, but the production with the predominance of manual labour and use for the body of a large number of expensive hromansilevyh pipes made the cost of this vehicle is higher than that produced in the same period, the “Moskvich-407”.

In fairness, it should be noted that a utility scooter of SZA contain in its design a number of elements used in our country for the first time in the industry, they appeared only after years. In particular, the steering system was first used rack gear is the next domestic car equipped with this engine, became the VAZ-2108, launched the series in 1984.

It is worth mentioning an independent rear suspension trailing arms — at that time almost all passenger cars were equipped with continuous rear beam and independent suspension was except that “hunchback” Zaporozhets ZAZ-965.

And, of course, cable clutch, which is now equipped with almost all cars. However, on the scooter, he appeared forced, since a motorcycle engine is designed exactly for such a drive. 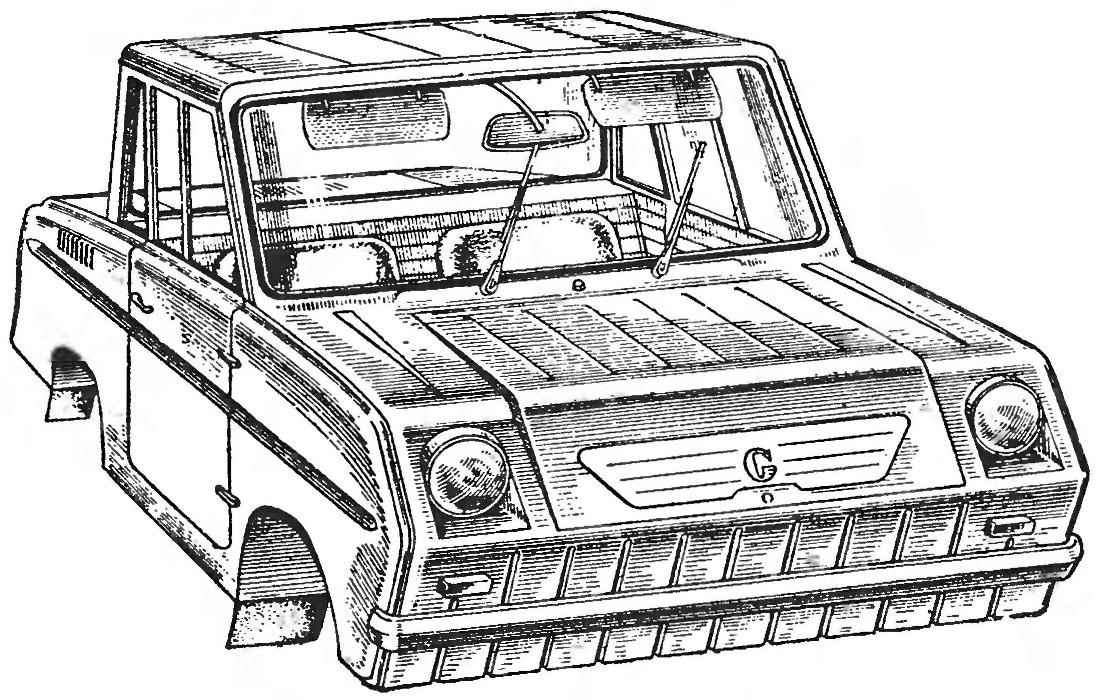 Design, SZA made a very positive impression — a rounded front, raised the front wheel fenders with them mounted on lights — all this created the impression of a tiny, but proportionate to the car in a retro style. However, in our country don’t like to use the accumulated experience, and every new machine starts to design “from scratch”. Exactly gone into oblivion, the brilliant brand “Victory”, it disappeared in dozens of foreign SUVs look “Field”. And so instead of “warm and fuzzy” kid, SZA appeared as if hammered together from boards another wheelchair FDD.

Preparation for production of new motorized wheelchairs began in April 1967, to produce it began in 1970. Designers and manufacturers expected to release FDD to get rid of several drawbacks inherent in the SZA. Thus, in contrast to the predecessor, the new car had a steel body, but the weight of the car compared to the SZA, having a metal body frame type, not decreased, but increased by as much as 70 pounds!

The trunk was tiny — it housed the spare wheel and the heater and Luggage space remained. That’s why many owners to equip their motorized homemade krasivymi trunk that the design of the machine was not provided. 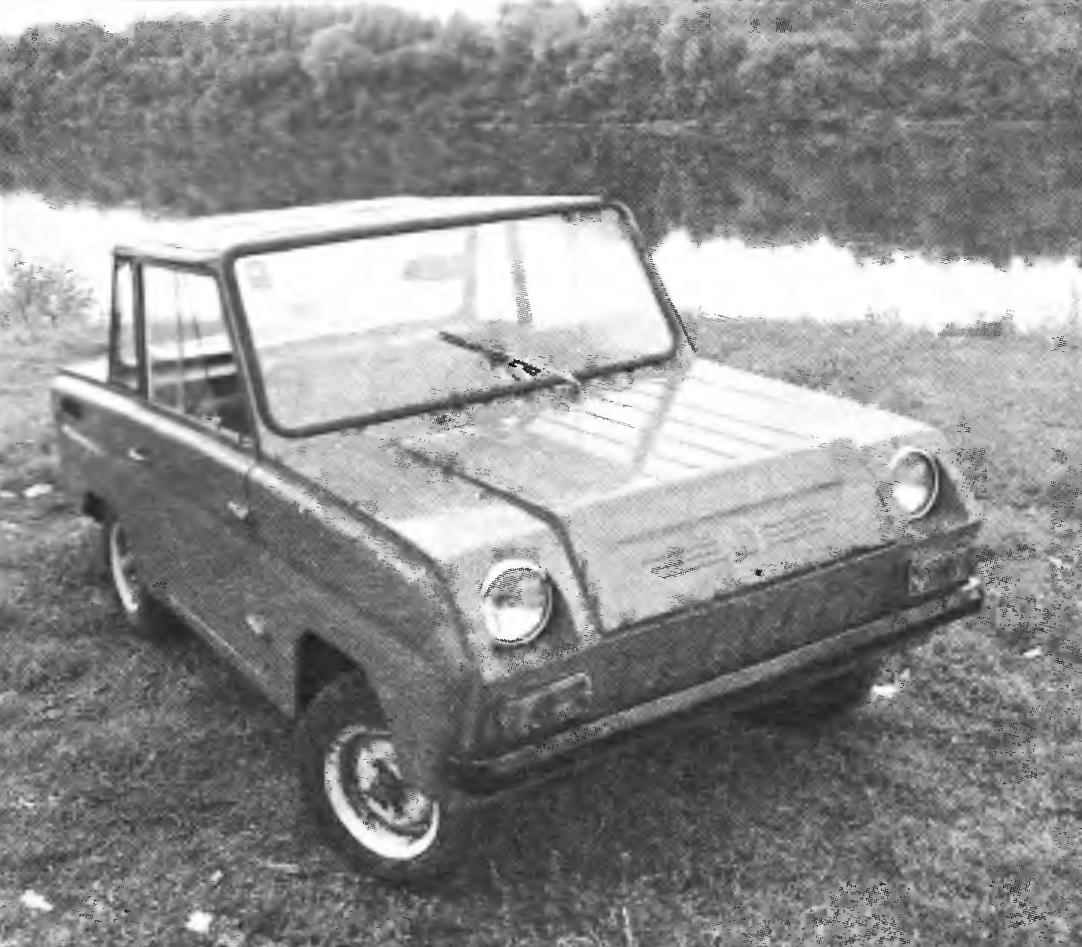 However, the FDD had many advantages. So, an indoor all-metal body, equipped although very voracious, but efficient gasoline heater, made it possible to use the scooter at any time of the year. Increased the maximum speed by as much as 5 km/h! In contrast, SZA, brakes were equipped with not only the rear but also the front wheels, while the brakes-made hydraulic.

The interior of the car, to the surprise of the owners, was more spacious than its predecessors. 12-horsepower engine IZH-L2 (further — 14-strong IZH-PZ) clocked the car up to 55 km/h (it should be noted that motor versions of these engines were more powerful, respectively, 15.5 and 18 L. E., as well as engine modifications for sidecars was deportirovali to increase their resource).

Carburetor — type K-36E, quite primitive by today’s standards (it was later replaced by a more perfect-To-62).

Muffler — welded, non-collapsible, with a pair of exhaust pipes of small diameter, which looked very funny. Cooling system motor air, forced. Grip — motorcycle type: multi-plate in oil bath. Transmission (and clutch) was located in the same block with the engine; logic switching: the movement of the lever from neutral forward first gear; from neutral sequential movements ago, respectively, second, third and fourth. 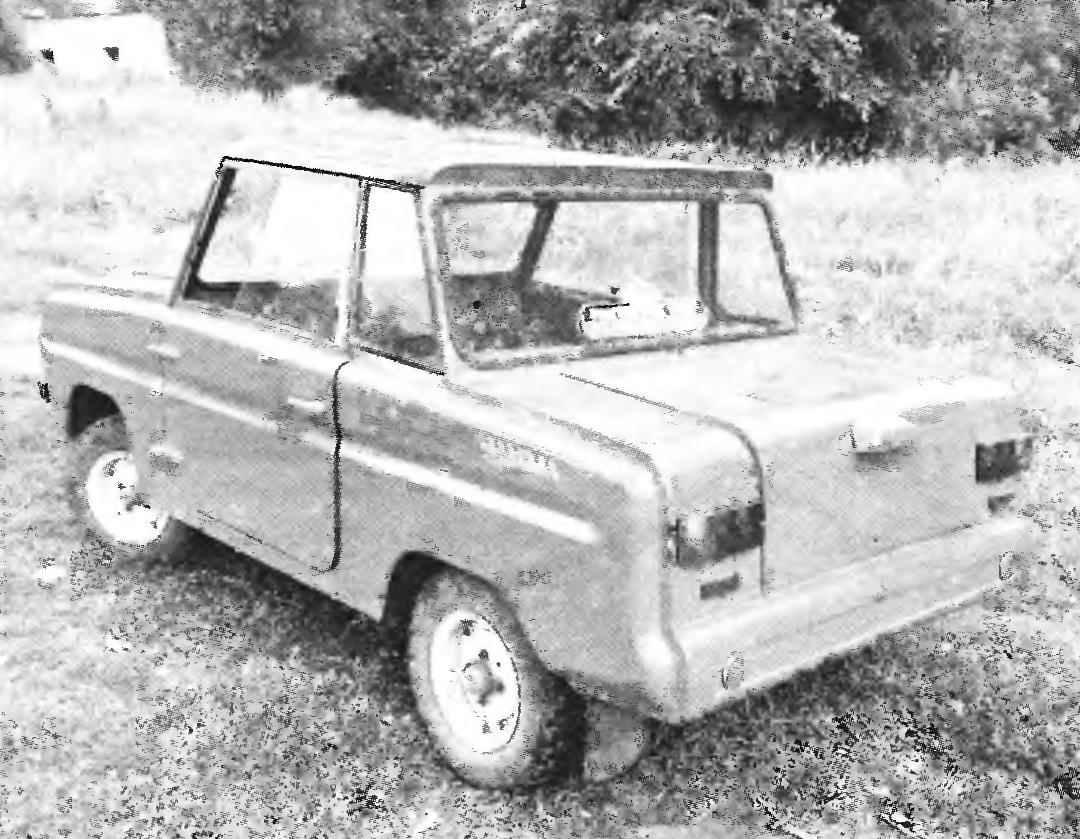 Vehicle instrumentation was very small — it consisted of a speedometer and an ammeter.

The fuel tank capacity was 18 gallons — when driving at cruising speed on the highway full filling enough for 220 — 260 km. 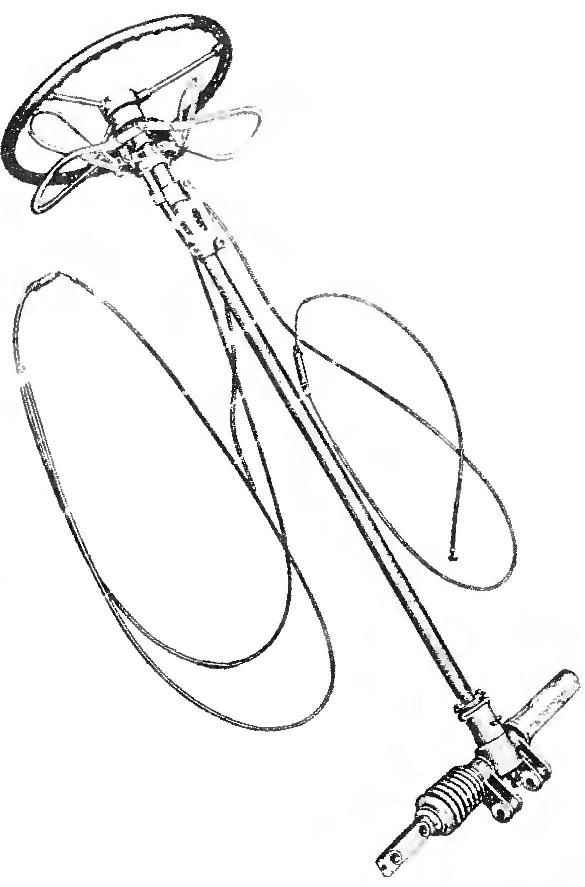 The steering mechanism with the drive throttle and clutch.

Interestingly, the scooter FDD were calculated only on control with hand — pedals she had. Arm actuator throttle and clutch was located on the steering wheel, brake lever and gearshift lever was mounted right of the driver. However, a small series with a different control layout was produced and the option for drivers with one hand and one foot. 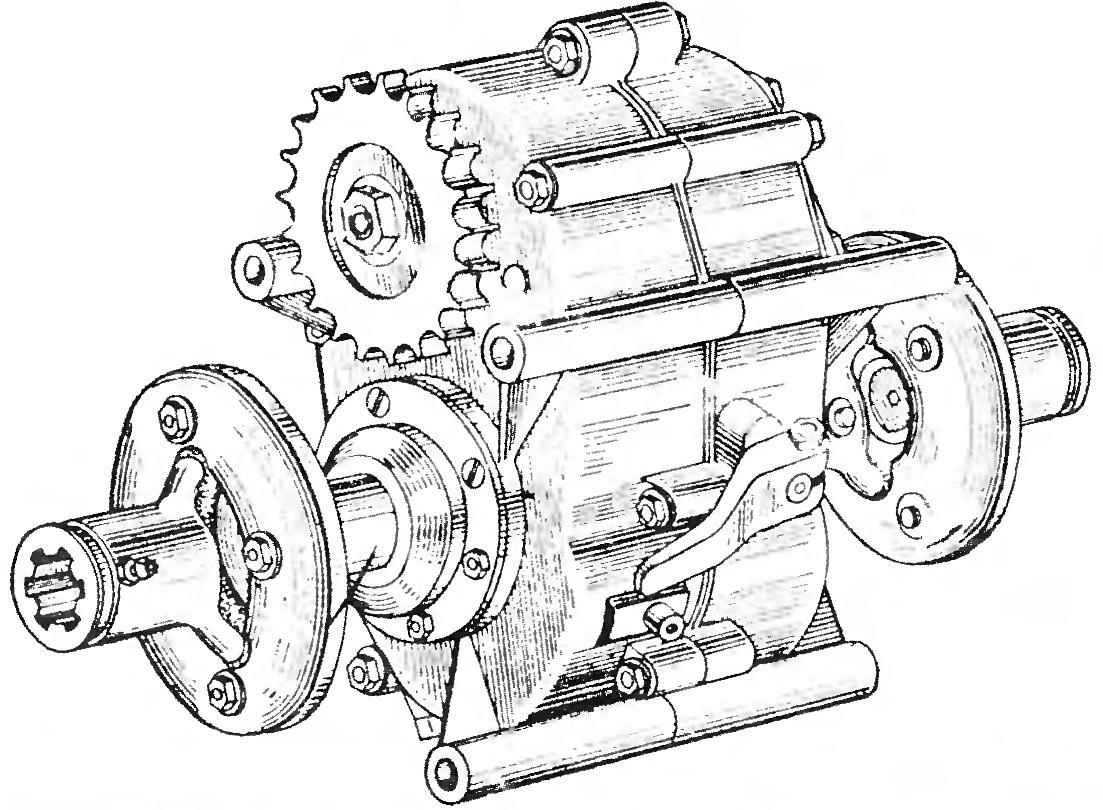 In FDD operation was simple and unpretentious. A lot of the drivers have maintained and repaired their motorized wheelchairs on their own, which greatly contributed to the fact that spare parts for the engines could be purchased not only in the specialized stores, but also to those that sold engine parts for motorcycle “IZH-Planeta”.

It should be noted that in the USSR the creation of wheelchair vehicles engaged not only in the SMZ, but at the Zaporozhye automobile plant. In particular, ZAZ mass-produced five varieties of car ZAZ-968 for drivers with different options of disability. 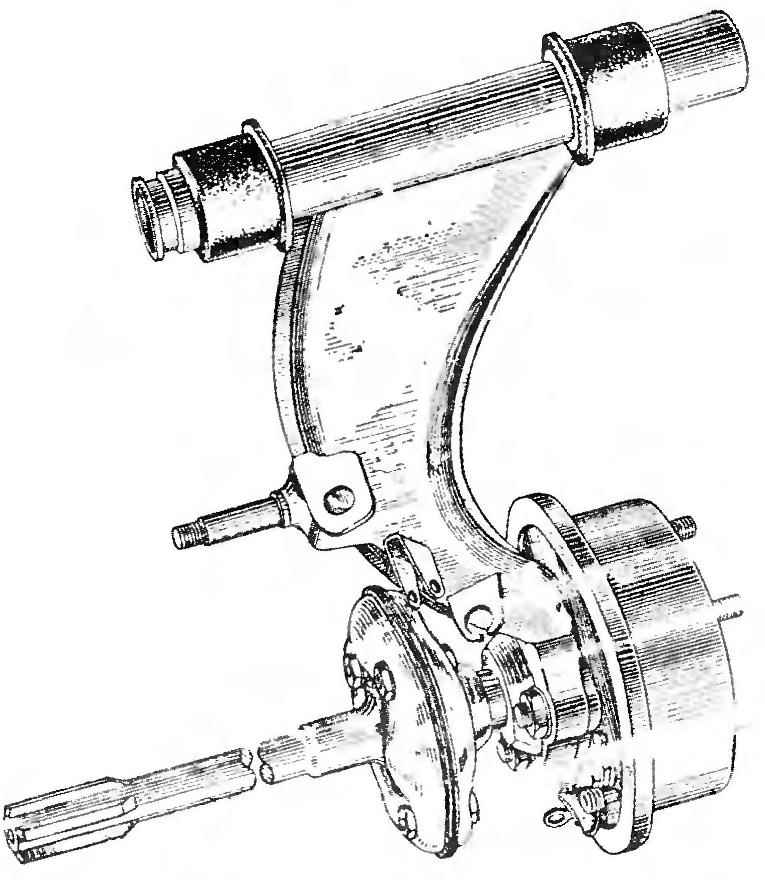 As already mentioned, the motorized wheelchairs were given to disabled by the social security charge, and five years later they were to be written off and replaced new. However, in some cities charged sidecar is not disposed, and is passed on to the clubs and at the station of young technicians. As it turned out, these mini-cars were a great “designer” for technical creativity of youth — at desire it was possible to collect buggy “zero” class, compact cars of various schemes — from sedans to convertibles and mini-vans to minibuses, snowmobiles of various designs and types. A lot of these generic “sets the constructor” “exception” battered and Amateur designers. 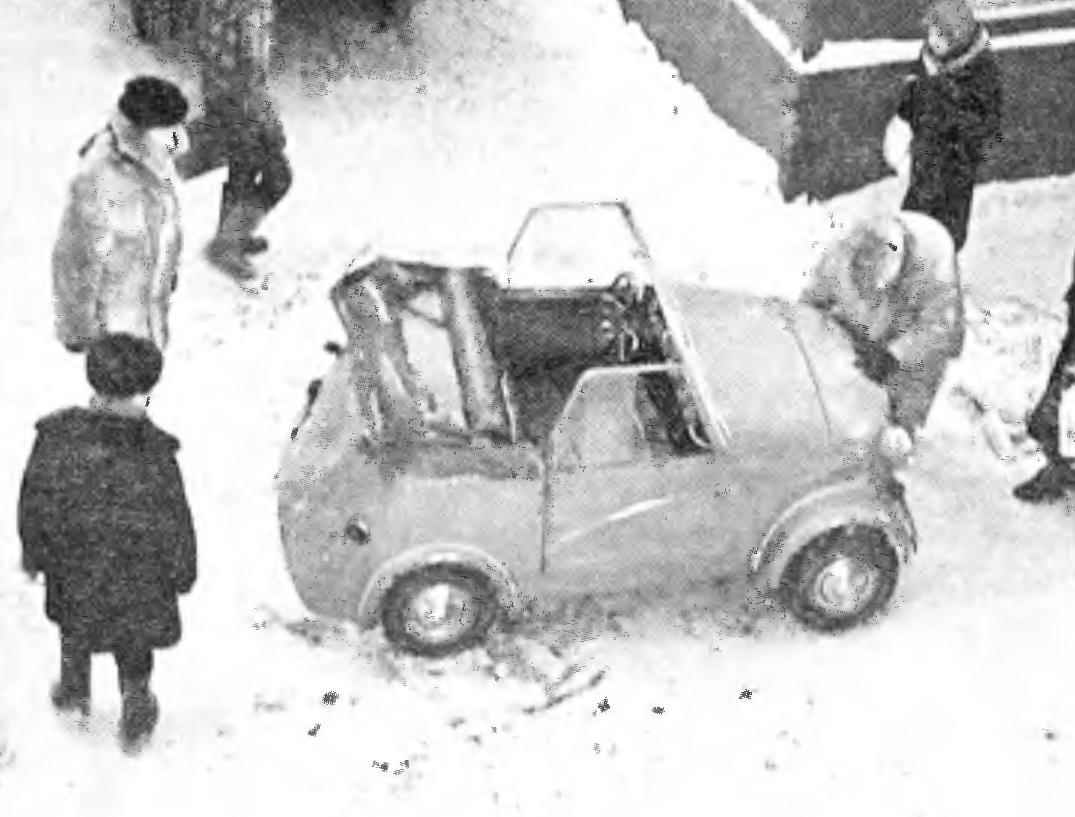 Microcar SZA in the movie “Operation “y” and other adventures Shurik”. 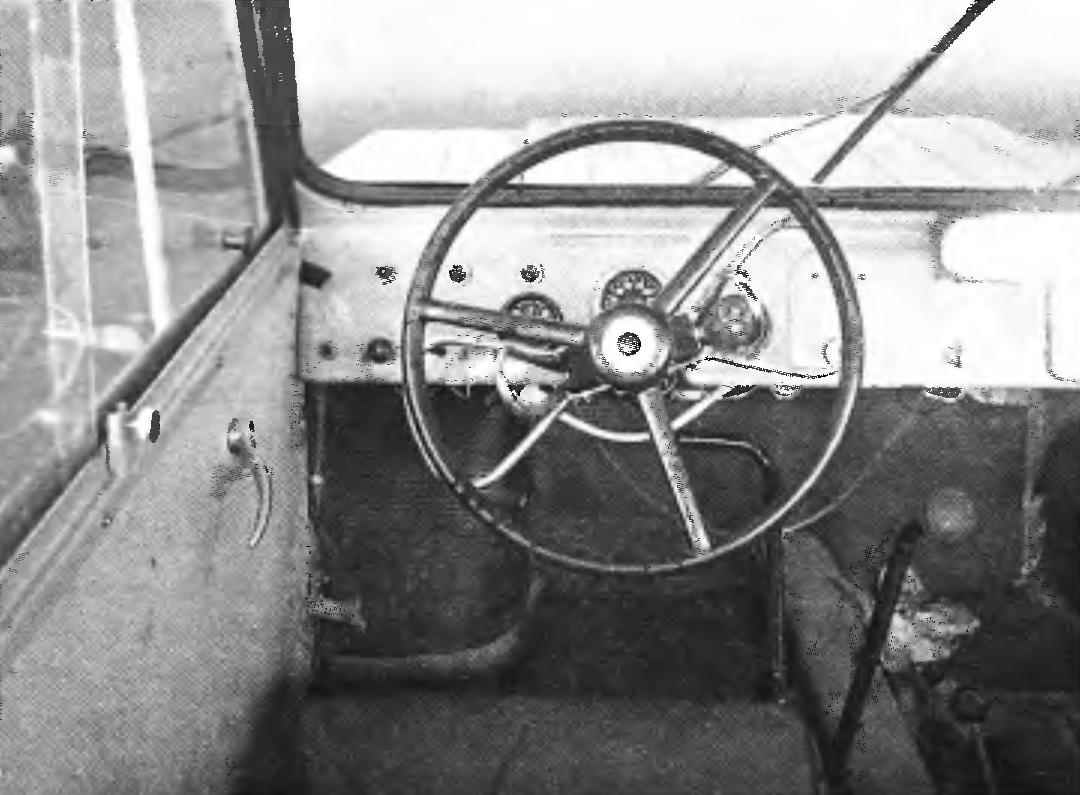 The driver’s workplace. The dashboard did not spoil it plenty of signs — only speedometer Yes ammeter. 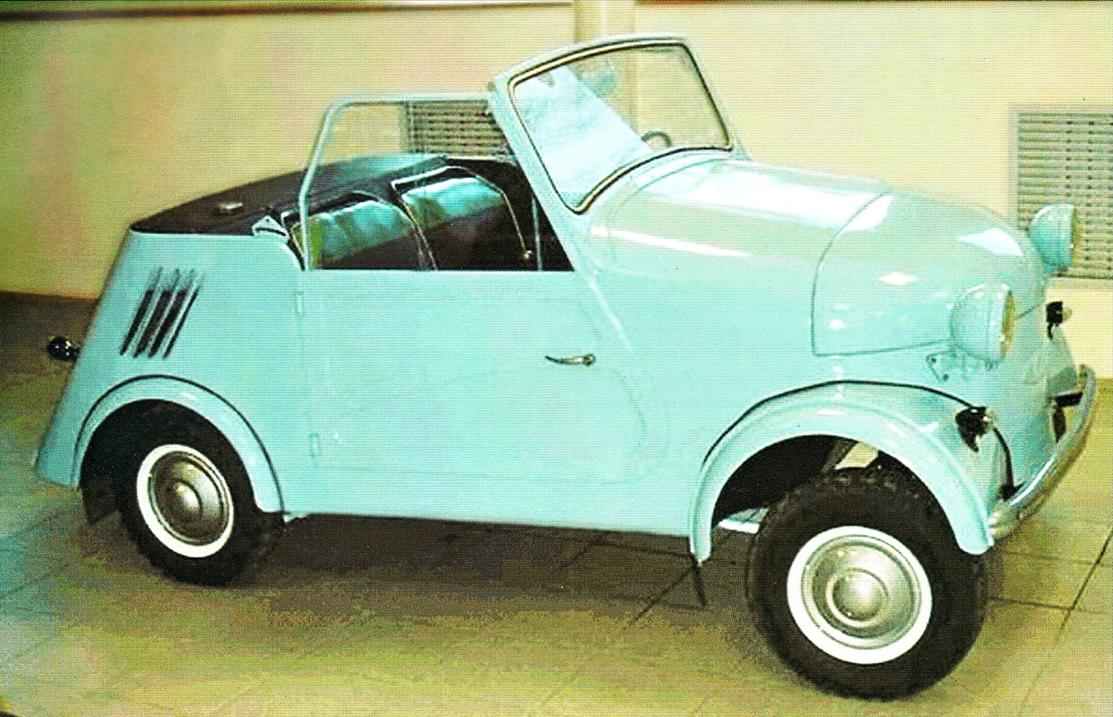 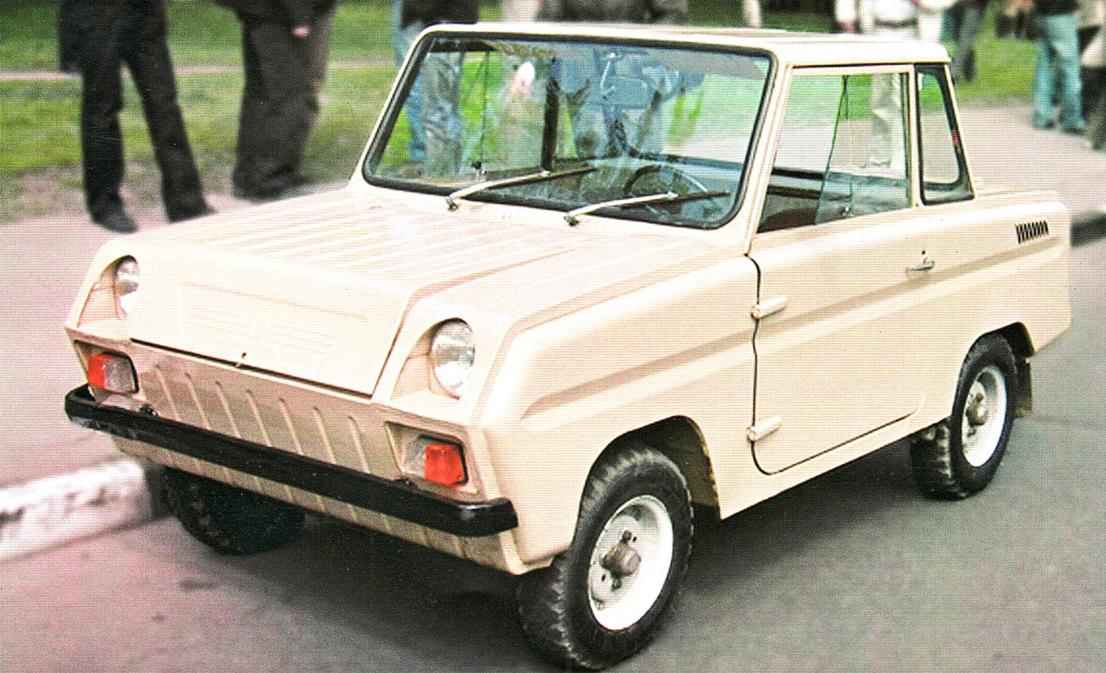 Fuel — petrol a-72 in the mixture with the engine oil

One of the most stylish cars, made on the basis of units of motorized wheelchairs, SZA, was the car “Ant” designed by renowned designer 1960 — 1970-ies E. Molchanov and built Moscow engineer O. Ivchenko. The car at the time, received the first prize at the all-Union review-competition of Amateur designs, and nationwide fame earned after the release of the wonderful movie “the Racers”, where “Ant” was filmed as “the actor” together with the brilliant O. Jankowski and Yevgeny Leonov.