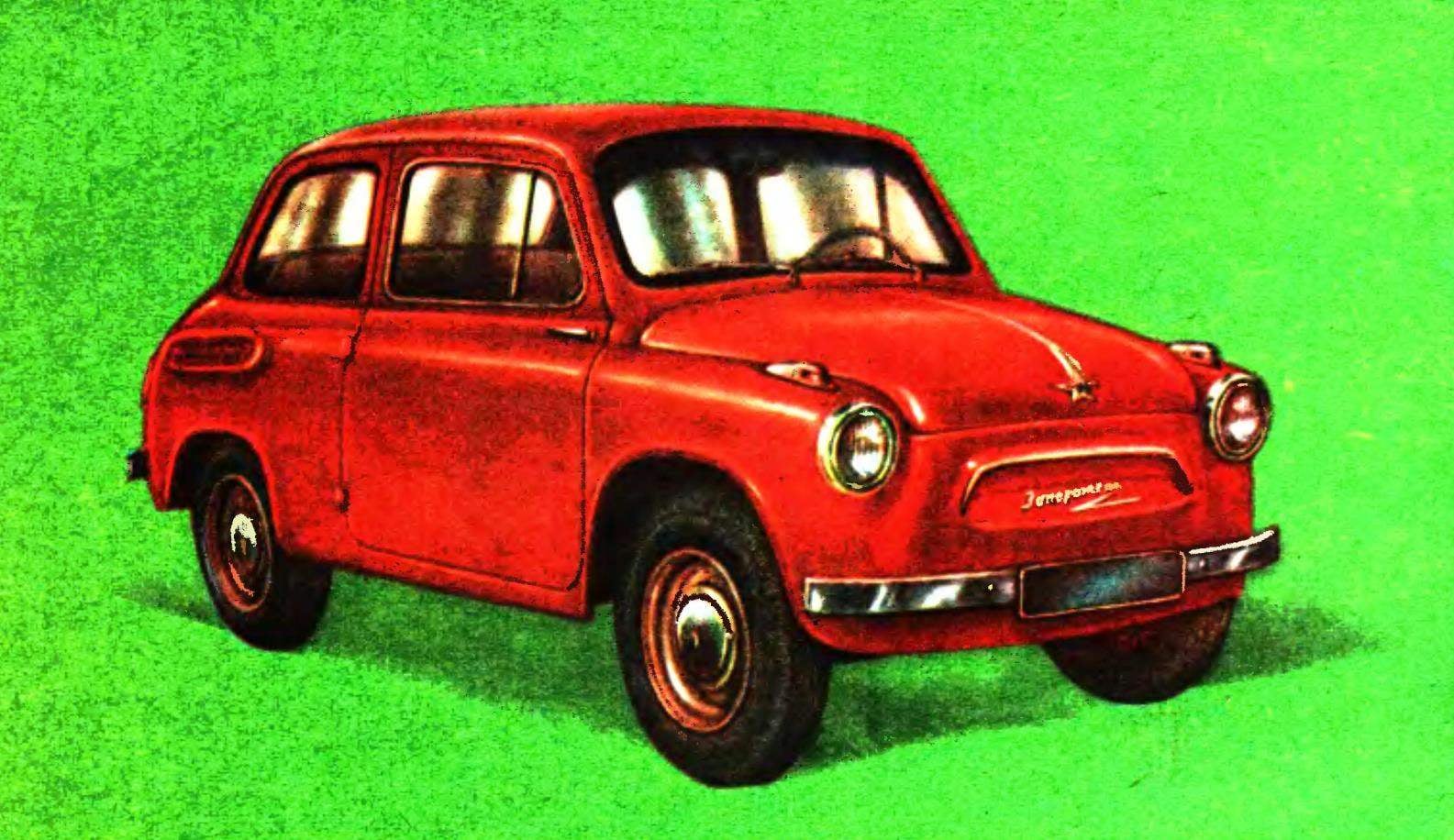 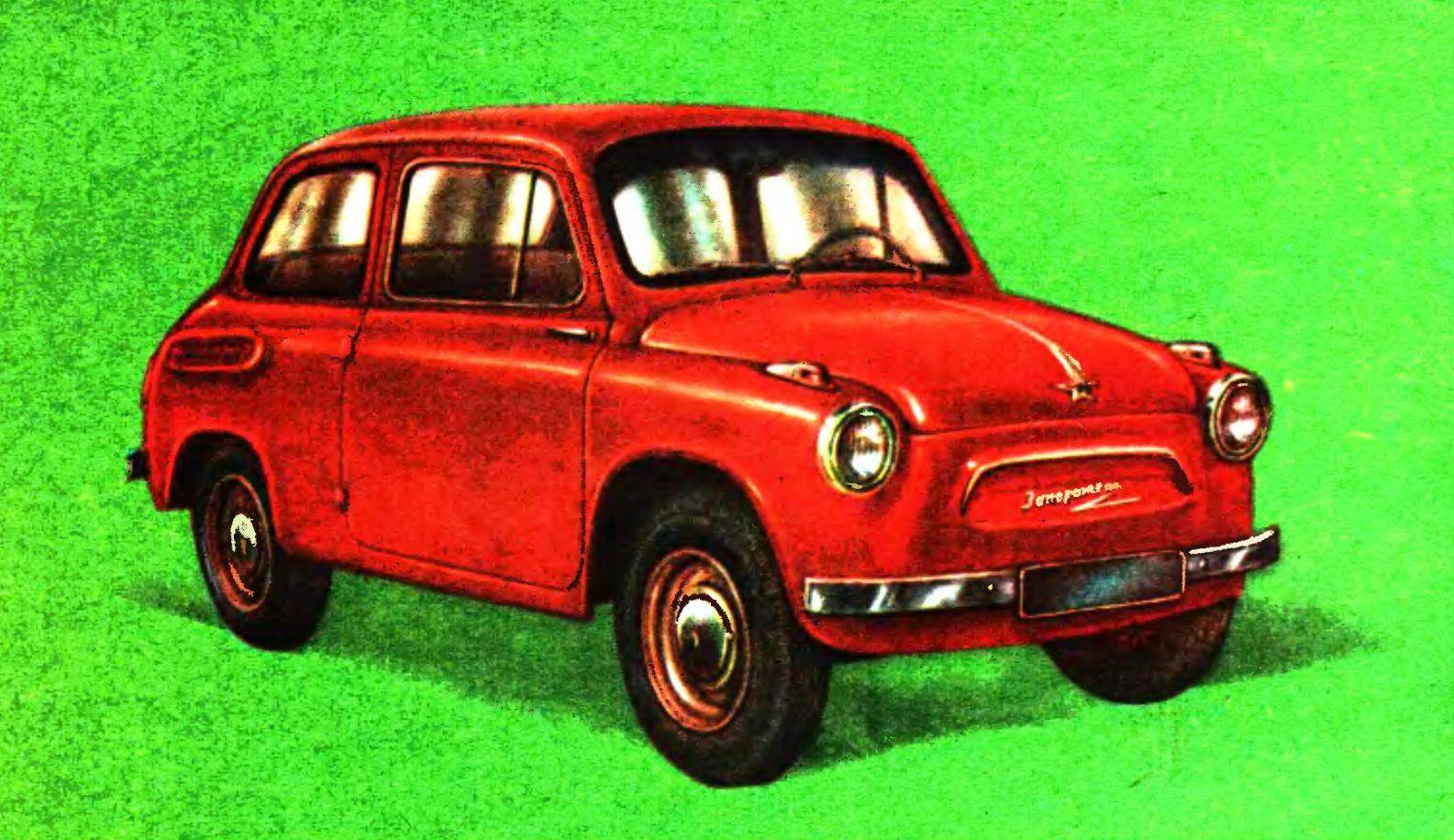 “Soap”, “the Hunchback”, “Fafik” — not once nicknamed little brisk Zaporozhets 965-th model. Many of us that he began his “auto” biography. Not all, however, know how motley was the story that first among the “Cossacks”.
Interest in midget, as they were called, the cars emerged and grew like an avalanche in the mid 50-ies. In different countries, there appeared numerous examples — from the primitive substitute of the vehicle to a small copy of the traditional subcompact. Work on such structures was deployed and we in the Soviet Union. The impetus was the fact that with 1956 MZMA ceased production of small-sized (length: 3855 mm), light (840 kg), quadruple the “Moskvich-401” and moved to more spacious, comfortable and expensive “Moskvich-402”. And the demand for compact, lightweight and easy the car has not disappeared.
Our factories and research institutes in the years 1955-1960 designed, built and tested many prototypes of cars of small and sidecars. Here are some of them: “Protein” IMZ-A50, US-048, US-031, GAS-18, US-059, Bauman. All these designs have helped to define more clearly the requirements for vehicles of ultra-low class.
Just in those years, it was decided to reconstruct the combine plant “Kommunar” in Zaporozhye and light plant diesel engines in Melitopol, in order from 1960 to expand minicar production. The design, construction and debugging of prototypes of new machines commissioned the team of the Moscow plant of small cars — MZMA (now AZLK). Their development began in the fall of 1956. For a sample, took the FIAT 600, the most successful car in this class. An important factor behind the choice was the fact that this machine was the newest (its production started in 1955), and that it best meets the conditions of mass production.
The first prototype of the car — she was given the index “444” — was ready just a year later, in October 1957. In its appearance and construction sites felt the impact of the FIAT 600, but even at this stage there has been significant differences.
For small machines the decisive factor is always the diameter of the wheels. Given the road conditions of our country, the designers increased landing size for tires from 12 to 13 inches. This move resulted in significant changes in the kinematics of the wheel suspension, made to increase the volume of wheel niches and to make adjustments to the overall design. Another important difference — the car was not a four-cylinder water-cooled engine as in the Fiat, and opposed twin-cylinder MD-65 Irbitsky motorcycle factory, which had air cooling. The disadvantage of the engine, and very significant, from a layout point of view, was a very developed Carter — its depth (distance from the crankshaft centerline to bottom of oil pan) was 184 mm. Therefore, to obtain an acceptable level of clearance at the rear wheel hubs of “Moskvich-444” had to install wheel motors, similar to those used today on LUAZ-969М. 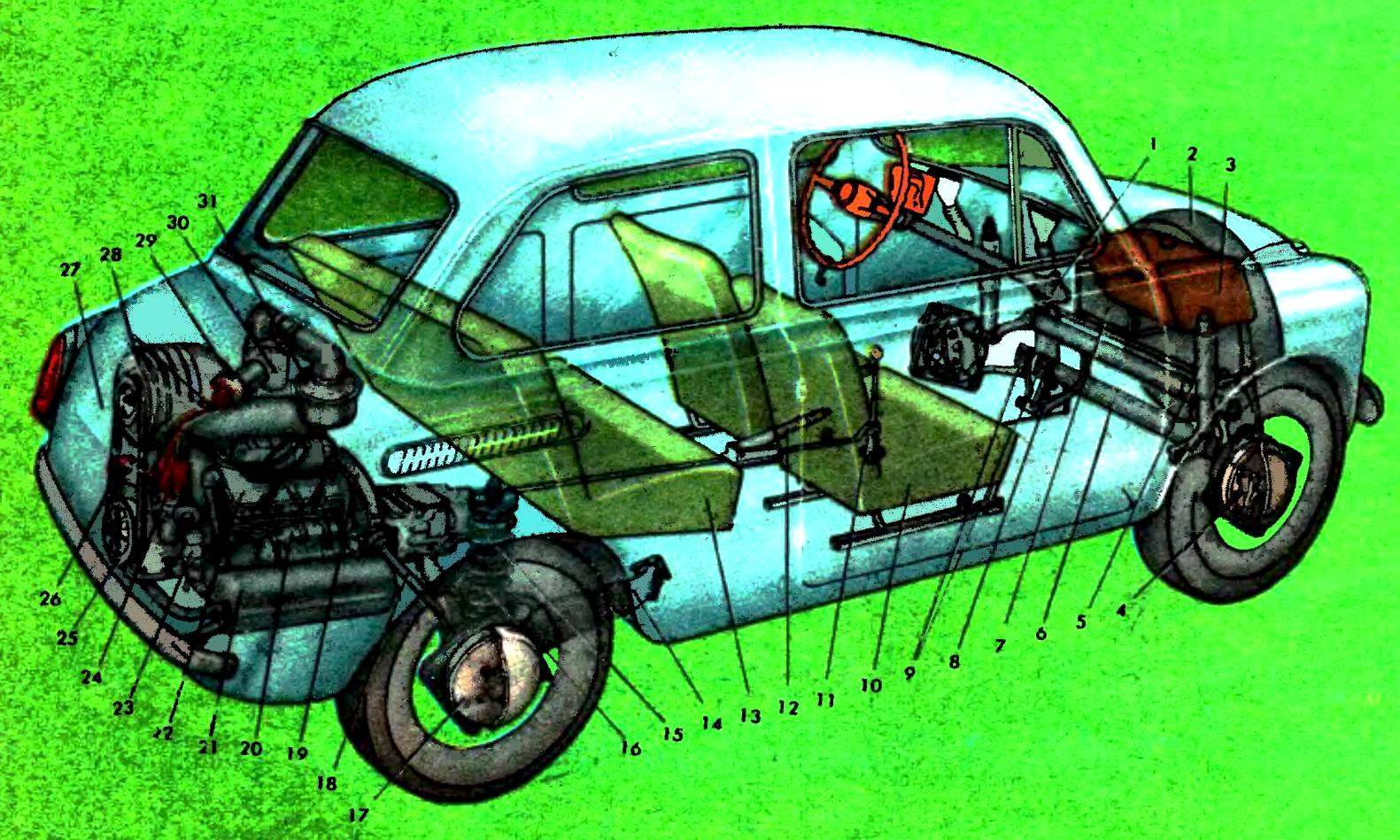 ZAZ-965:
1 — steering gear 2 — spare tire 3 — fuel tank, 4 — brake drum front wheel, 5 — absorber of a front suspension, 6 — front suspension, 7 — battery, 8 — pedal throttle carb 9 — clutch pedal and drive-brakes, 10 — front seat 11 — gear lever, 12 — lever hand brake, 13 — rear, seat 14 — link rear suspension, 15 — shock rear suspension, 16 — spring rear suspension, 17 — brake drum rear wheel, 18 — axis, 19 — cross member engine mounts, 20 — starter, 21 — damper, 22 — cylinder head of the engine 23 and fuel pump 24, the breaker — distributor, 25 — centrifugal macroeconomical, 26 — mesosaline neck, 27 — bell, automatic temperature controller of the engine, 28 — fan 29 — ignition coil, 30 carb, 31 air filter.
In addition, the first pattern 1957 — call it conditionally “444-57” — differed from the Italian machines, in addition to the above, the shape of the rear portion of the body, other design front, reinforced gearbox. The triangular emblem on the front, convex sagittal podshtampovki door, decorative “comb” before opening the rear wheel (motif, borrowed from the “Moskvich-402”) and four round air intake on the rear wing, resembling miniature helmets firefighters — those were the other distinctive parts of the body. By the way, already at this stage the machine had interchangeable front and back glass is a valuable feature for the mass model.
The following year MZMA built new models (we call them “444-58”) with the changed design elements: the front wing with a higher top, other form of cladding. One of them, painted in ivory, with a roof of carrot color, was exhibited in the winter of 1958/59 year on VDNH USSR. This machine, the emblem of which is “444,” was “650”, has been preserved from the first sample and the front suspension on transverse leaf spring and movable (very heavy) glass in the door.
Engine MD-65, created on the basis of motorcycle, it was revealed that the test is unsuitable for the car. On a motorcycle with a sidecar that weighs 320 kg, the engine worked in more favorable (for load) conditions than on the minicar, twice as heavy. In addition, MD-65 on the bench developed a capacity of only 17.5 HP Hence the poor dynamics of the machine: sluggish acceleration and the shortage of maximum speed (80 km/h instead of the project 95 km/h). The motor was very noisy, poorly cooled. But the main drawback was the fact that the engine was short-lived: its life before overhaul could barely reach 30 thousand km.
For these reasons, first at the MZMA in 1957, and then in the US began designing a new, special engine. Created on MZMA two designs two-cylinder boxer type of engine “Citroen 2ЛС” air-cooled and a displacement of 748 cm3 in the second half of 1958, still only passed bench tests. As a temporary measure for an improved version, designated “444-BKR” (i.e., without steering gear), put the engine of the BMW 600 — the same small-car. This motor had a much smaller sump, like engineered motors MZMA and US. The rejection of reducers allowed to reduce the unsprung weight of 6 kg. at the same time the car received a front suspension on the longitudinal equalizer levers and the torsion plate and the side air intakes in the form of elongated bars.
In 1959, saw the light of the new prototypes of the future “Zaporozhets”. Then design Bureau MZMA with arrived in late 1958, the team of engineers ZAZ started the production of drawings for manufacturing preparation. In April 1959, all the technical documentation for the model 965 was transferred to Zaporozhye. 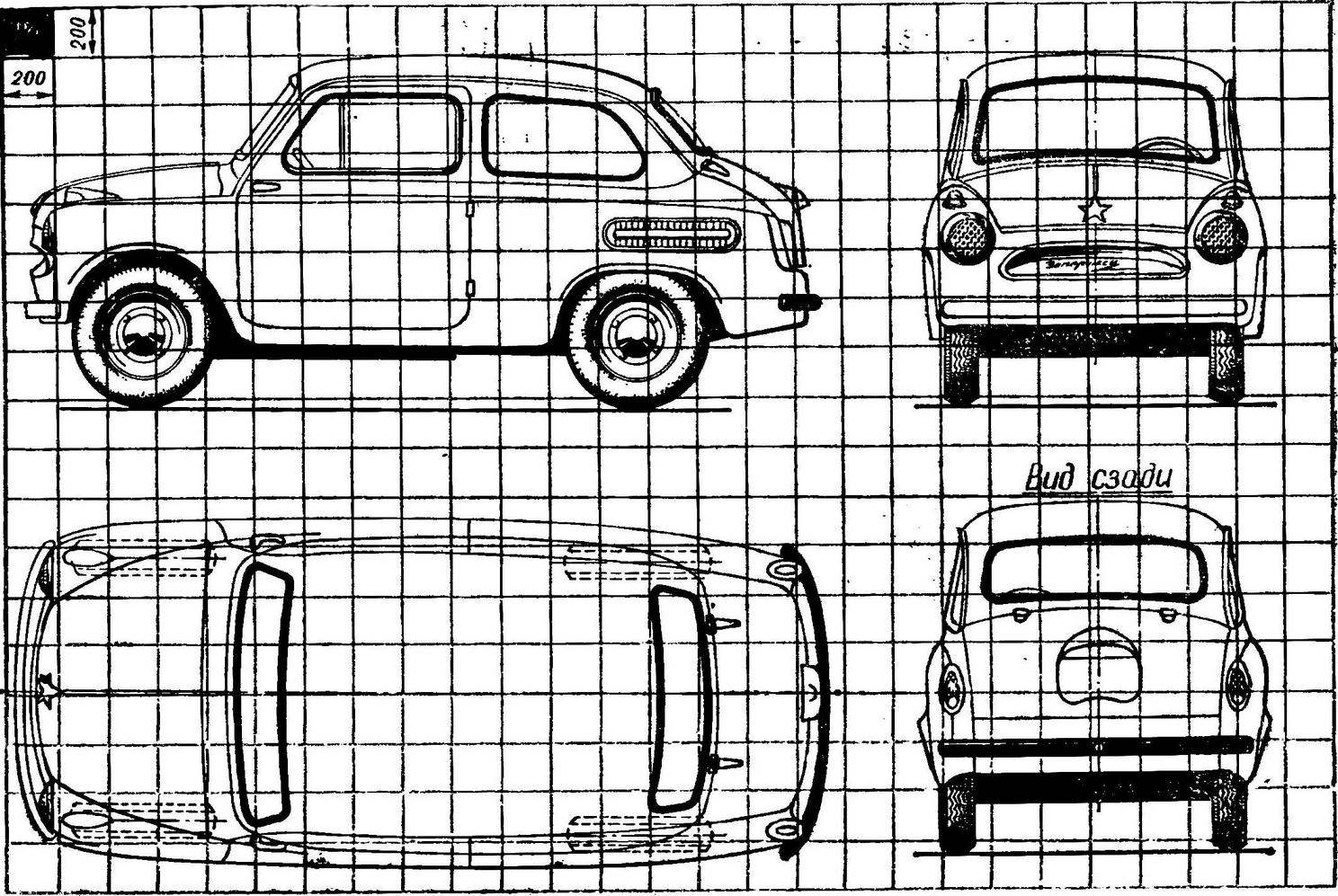 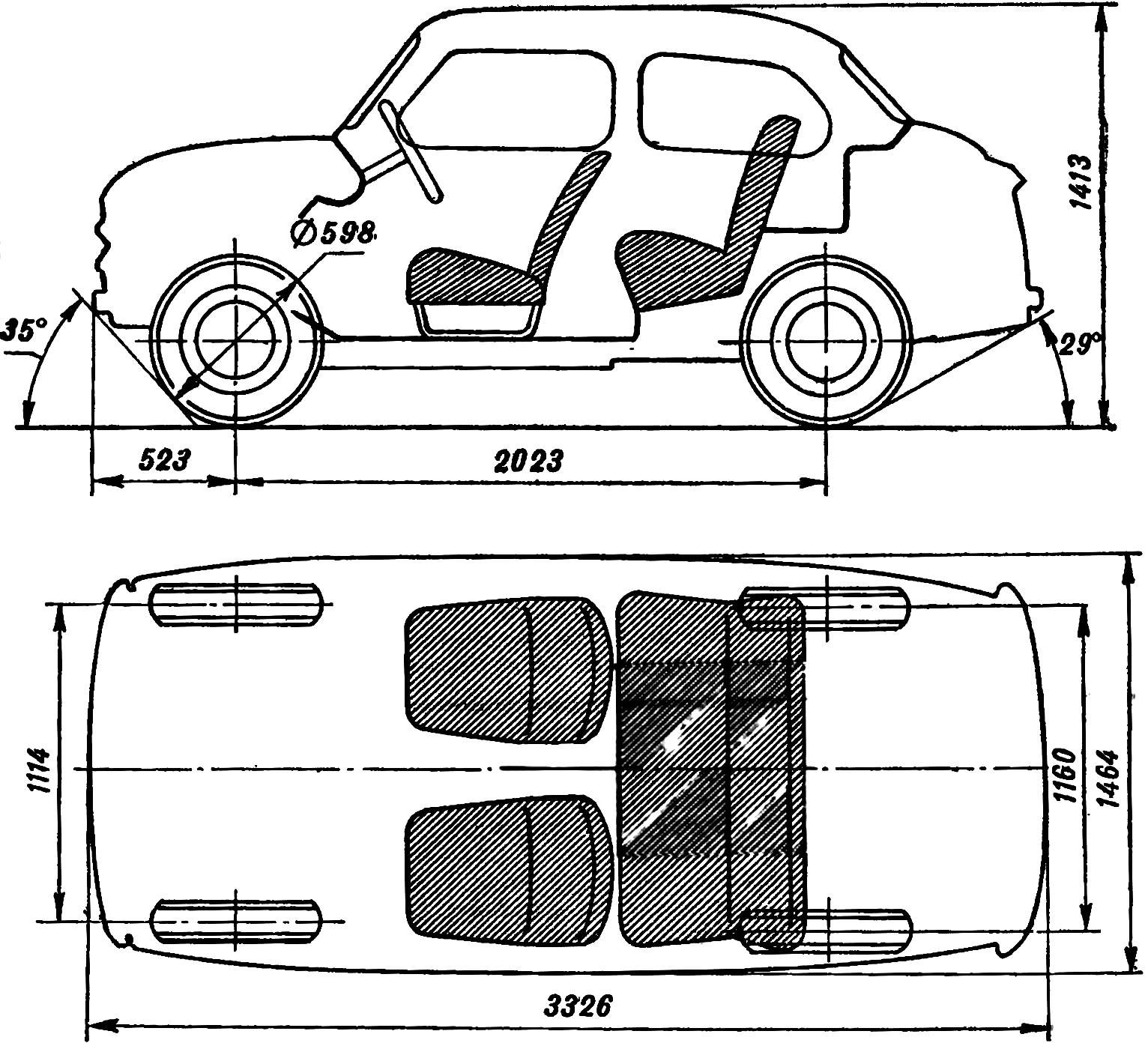 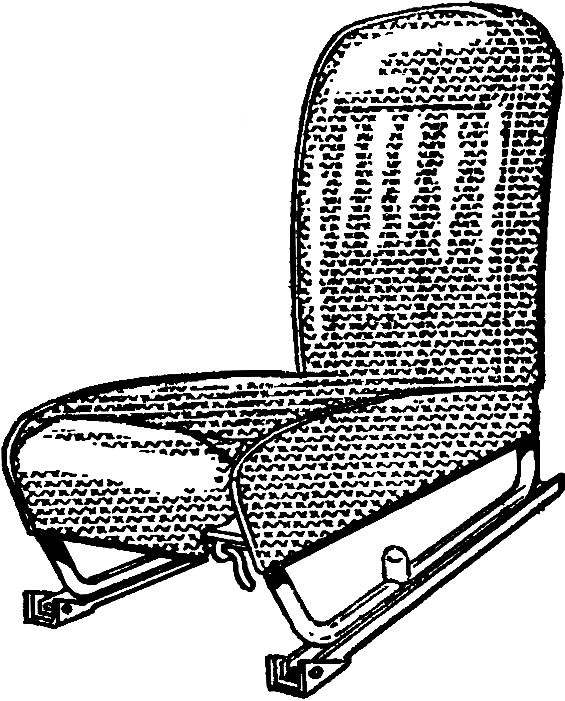 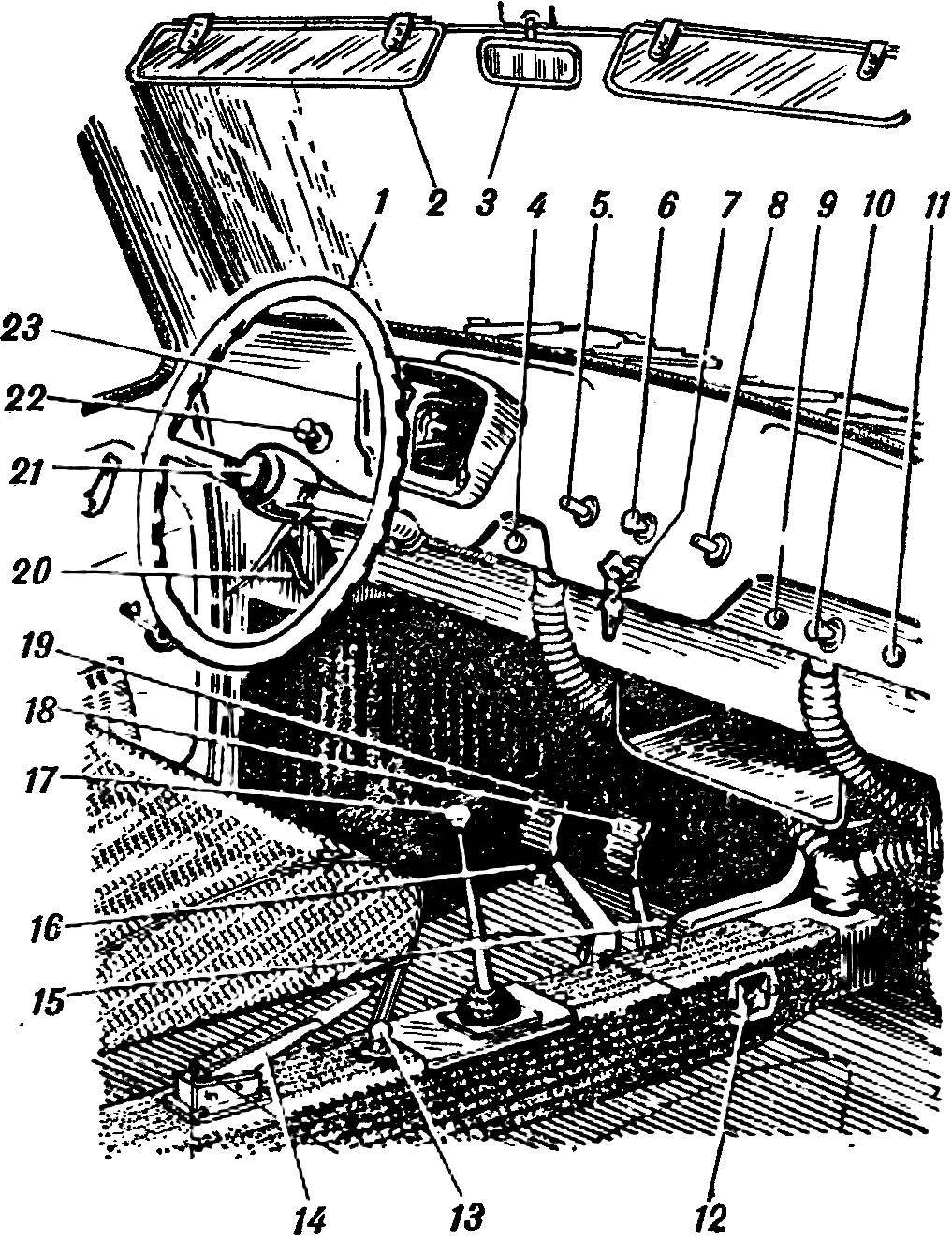 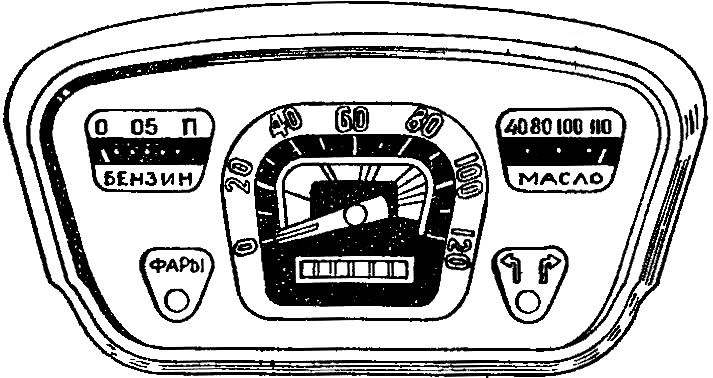 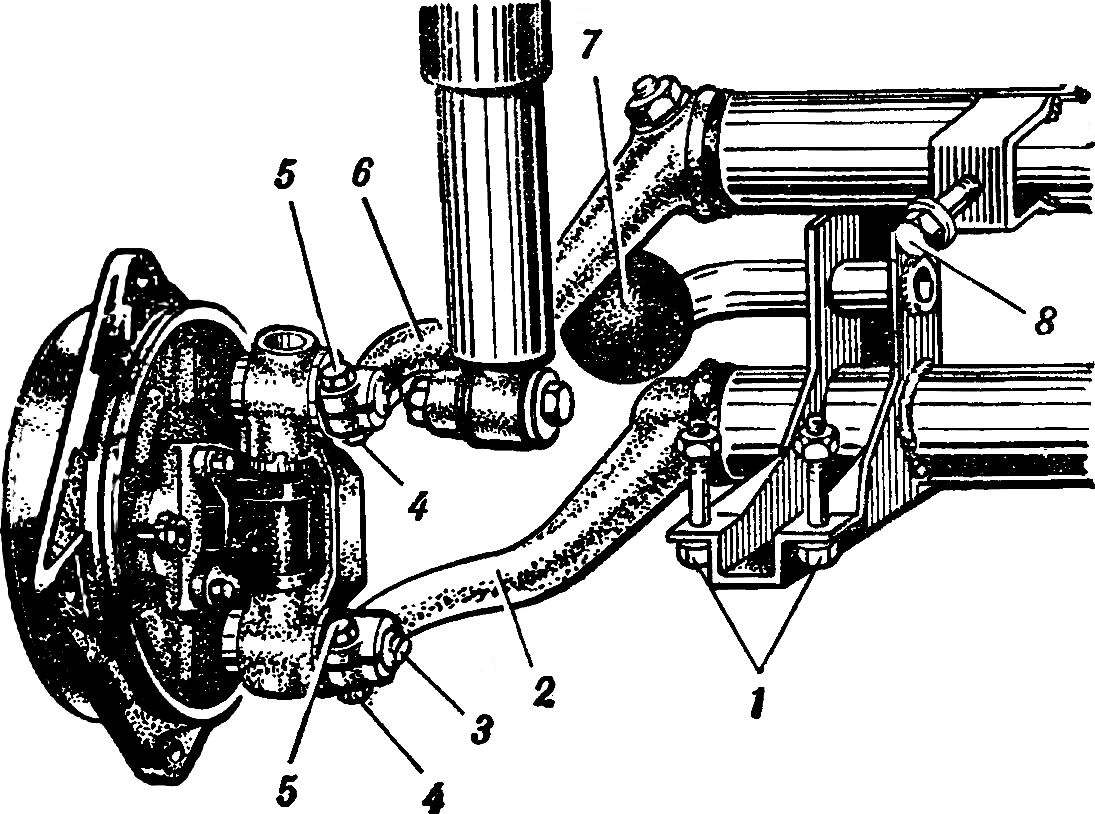 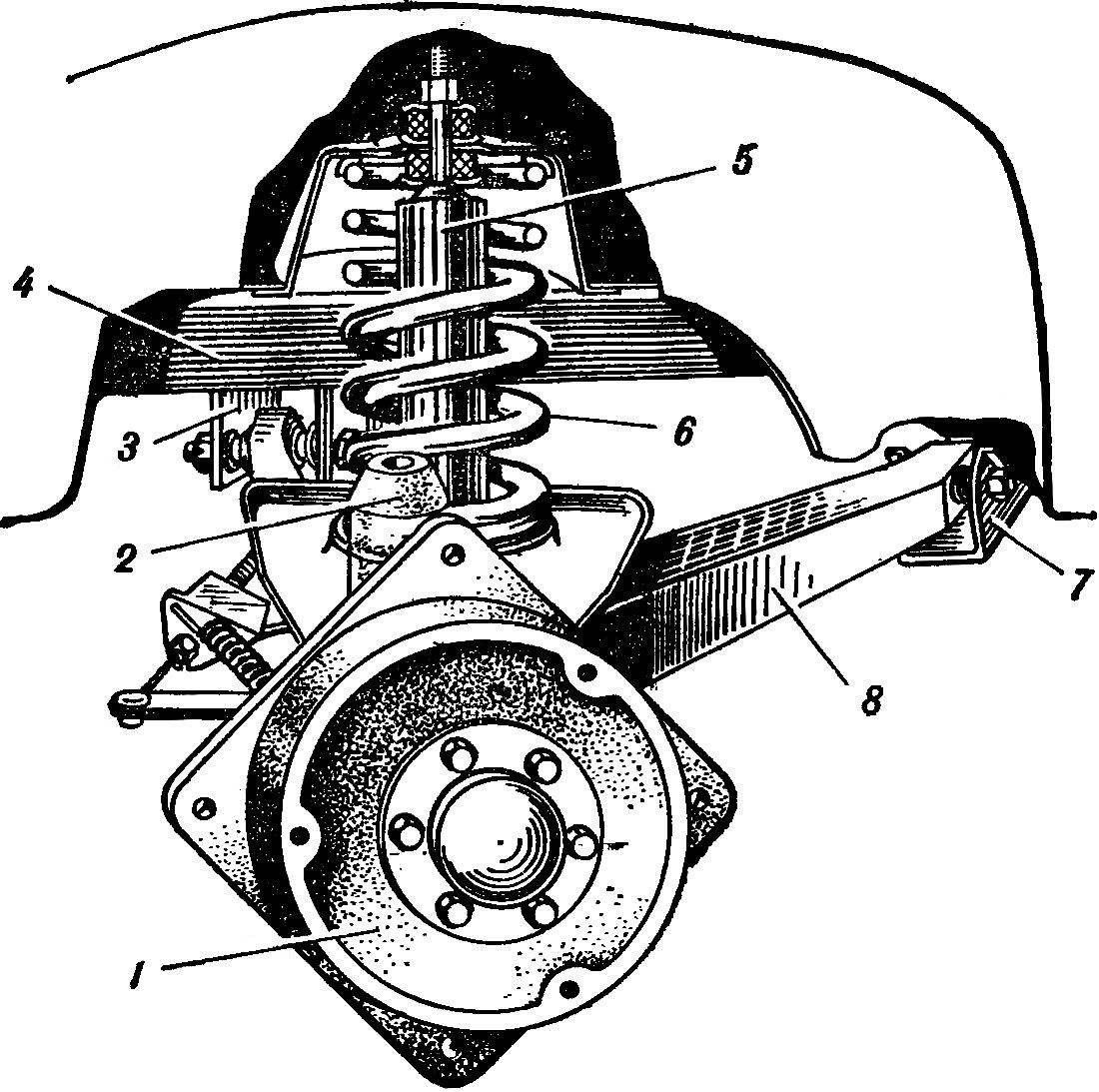 Fig. 7. Rear suspension:
1 — the brake drum rear wheel, 2 — buffer, 3 — bracket, control arm, 4 — power panel 5 — absorber, 6 — spring, 7 — bracket of the longitudinal lever 8 — the longitudinal lever.
Prototypes of 1959 unlike the FIAT 600 had no sliding glass doors, and drop like on most cars. Gone sagittal wydawca on the wing and “comb”. The rear lights are supplied with reflectors not in the middle and at the bottom. The headlights mounted in separate housings on the wings.
Later the samples were manufactured with a modified front wings and punch on the front panel. These cars left the headlights on the front fenders, but the front panel logo appears ZAZ and the words “Zaporozhets” rectangular letters.
In June 1959, WE were ready the first two four-cylinder engine of the ZAZ-965. One (965Г) had a horizontal opposed cylinder arrangement and a working volume of 752 cm3, other (965В) — V-shaped working volume and 746 cm –3.
What was the difference? On the motor 965Г Cam shaft lay beneath the crankshaft, the centrifugal fan blows air to cool the cylinders, the oil was purified by filter with replaceable elements, the crankshaft was forged from steel. Another motor, 965В with a V-shaped arrangement of the cylinders was smaller, it was much easier access to the valve mechanism for adjusting gap — do not interfere with the housings of the rear wheels. The cooling air was otkazyvatsa axial fan. Camshaft the V-shaped arrangement of cylinders mounted in the collapse of blocks, the length of the push rods to drive the valves became smaller. For cleaning the engine oil 965В served as a centrifuge, crankshaft and made a cast. Because the moment of the inertia forces were not balanced, the design introduced the shaft with counterweights. He was moving with the same speed that the crankshaft but in the opposite direction.
Power coefficients both designs are equivalent, but the engine 965В had a number of advantages over 965Г, was original and modern according to a constructive solution. And accepted for serial production.
In 1960 ZAZ was a preparation for the production of new machines. The first batch of the plant was collected on 22 November and to the end of the year has released about a thousand of “Cossacks”.
So began his life of the first Soviet subcompact car ZAZ-965. It would be better to call it compact (4 seats, length 3330 mm), given modern terminology.
Along with the base model factory built modification 965С for the carriage of mail (RHD, metal panels instead of rear Windows and a letter box to in place of the rear seat); and 965Б with manual control for disabled people.
From October 1962 to may 1969 and descended from the conveyor modernized “Zaporozhets” ZAZ-965A with a more powerful 27-horsepower engine, the displacement of which has increased to 887 cm3. It also featured a steering wheel with a recessed hub, the headlights mounted in the wings (not on them), the decorative molding along the sides, changed the factory sign (is. rectangle), decorative grille panel front end. Based on the model 965A was produced in two versions: a manual control 965АБ (1963-1969:) and 965АР (1966-1972).
“Zaporozhets-965” from the very beginning was well received by the consumer. In fairness it should be noted that (especially on the machines of the first issue) is often a torsion bar front suspension lose elasticity, and in hot weather the engine overheated. But despite these “childhood diseases”, a minicar immediately showed themselves from the best side in the rural areas with poor roads.
Good cross ZAZ-965 bound smooth bottom, independent suspension all wheels, with sufficient loading (60% of the total weight) wheels. In severe cases, when the car has not been able to get myself out of the mud, the crew at known diligence was always able to release from captivity weighing only 665 kg car.
And another feature of the ZAZ-965 had established his reputation as a machine, convenient for the dirt and back roads. On roads with deep ruts left by the trucks, a passenger car, even a GAZ-69, it is very hard to go. Between the ruts the truck GAZ-51, for example, leaves a solid strip of road with a width of about 1150-1200 mm. All cars, in order “not to take the diff” should the wheels on one side to go on this “hump” and the other wheels to follow the track. Only the ZAZ-965 with careful driving I managed to travel the space between the deep ruts.
The townspeople quickly appreciated in “Zaporozhets” maneuverability, good economy, high body strength. The last quality was facilitated by the presence of only two doors, openings which weakened the sidewall, on machines with chetyrehdverny bodies. And of course, the engine with individual cylinders, relatively lightweight and easy to dismantle, always able to quickly and easily remove, repair their forces “in the kitchen” and without great loss of time to put in place.
Nine years produced this machine. Today it is still common on the roads, and many owners consider their ZAZ-965 a famous car.
L. SHUGUROV