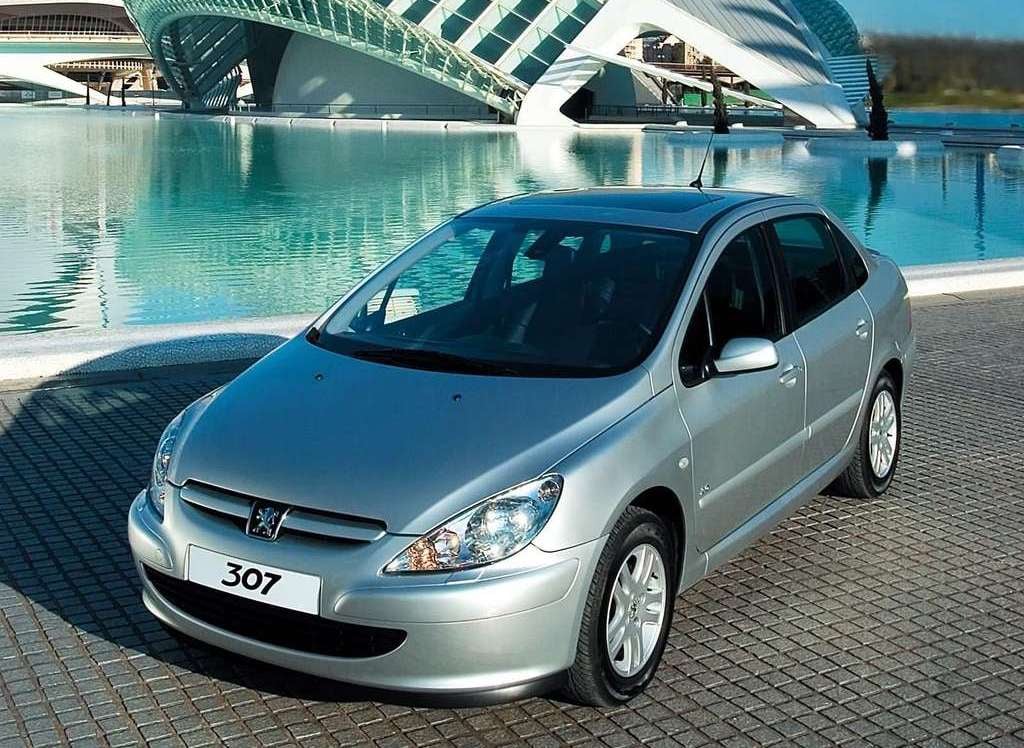 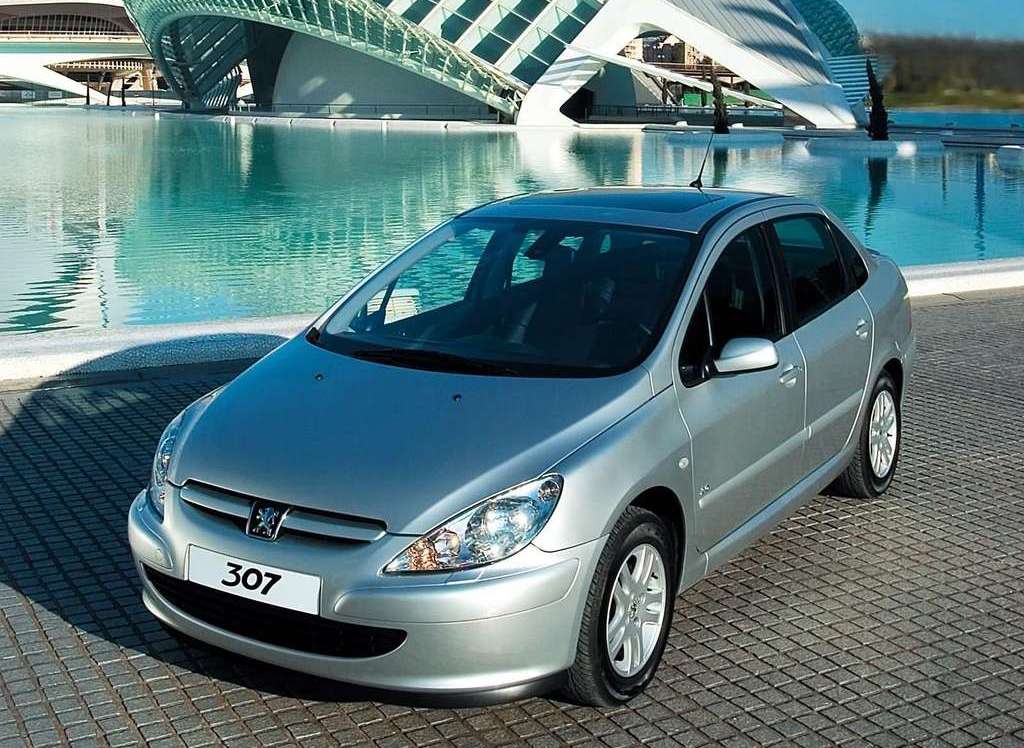 In November 2001, the authoritative international jury of fifty-five journalists from leading European automobile magazines named the PEUGEOT 307, the contestant from France, “European car of 2002”; second place was awarded to the new RENAULT LAGUNA II, and the honorary third FIAT STILO.

Cars of a Golf class, to which the PEUGEOT 307 has received the name by name the founder — front-wheel drive three – or five-door hatchback VOLKSWAGEN GOLF launched back in 1974. This car is the so-called small class, composed by the famous Italian designer Giorgetto Giugiaro, was powered by a transversally located inline four-cylinder engine working volume of 1,093— 1, 471 liter capacity 50-70 HP Success of this machine, predictive buyers the most optimal balance of price and its consumer qualities, was so huge that this led Volkswagen to quickly deploy a release of the whole range of cars of a new class in Germany and in several other countries.

The huge demand for such machines could not cause a lot of imitations. Leading car companies in eager rivalry offered the buyer more or less successful copies of the VW GOLF. But the greatest success achieved by the French car company Peugeot, releasing a number of popular models, similar to the German hatchback. The first French “Golf” was the PEUGEOT 205. This car came in 1983, when the firm Peugeot has faced serious financial difficulties and the situation became a kind of “magic wand”, entered on equal terms into competition with well-known in Europe the VW GOLF. Design the PEUGEOT 205 was so well developed that the car without much change was produced until 1998.
When sales 205 began to decline, the firm has begun to develop a “Golf” the next generation is more modern, more spacious, more powerful. Presented to the public in 1993, a new hatchback, dubbed the PEUGEOT 306, was one of the most popular front wheel drive small car not only in French but in the European market. The model was produced with three-, four – and pyatidverny body type hatchback, sedan and station wagon and two-door convertible type. According to representatives of the company, some modifications of the model series — in particular, wagon and convertible will be produced until 2002.
The following modification of the Golf, PEUGEOT 307, won the title of “European car of 2002”, became the best-selling in the history of the company. 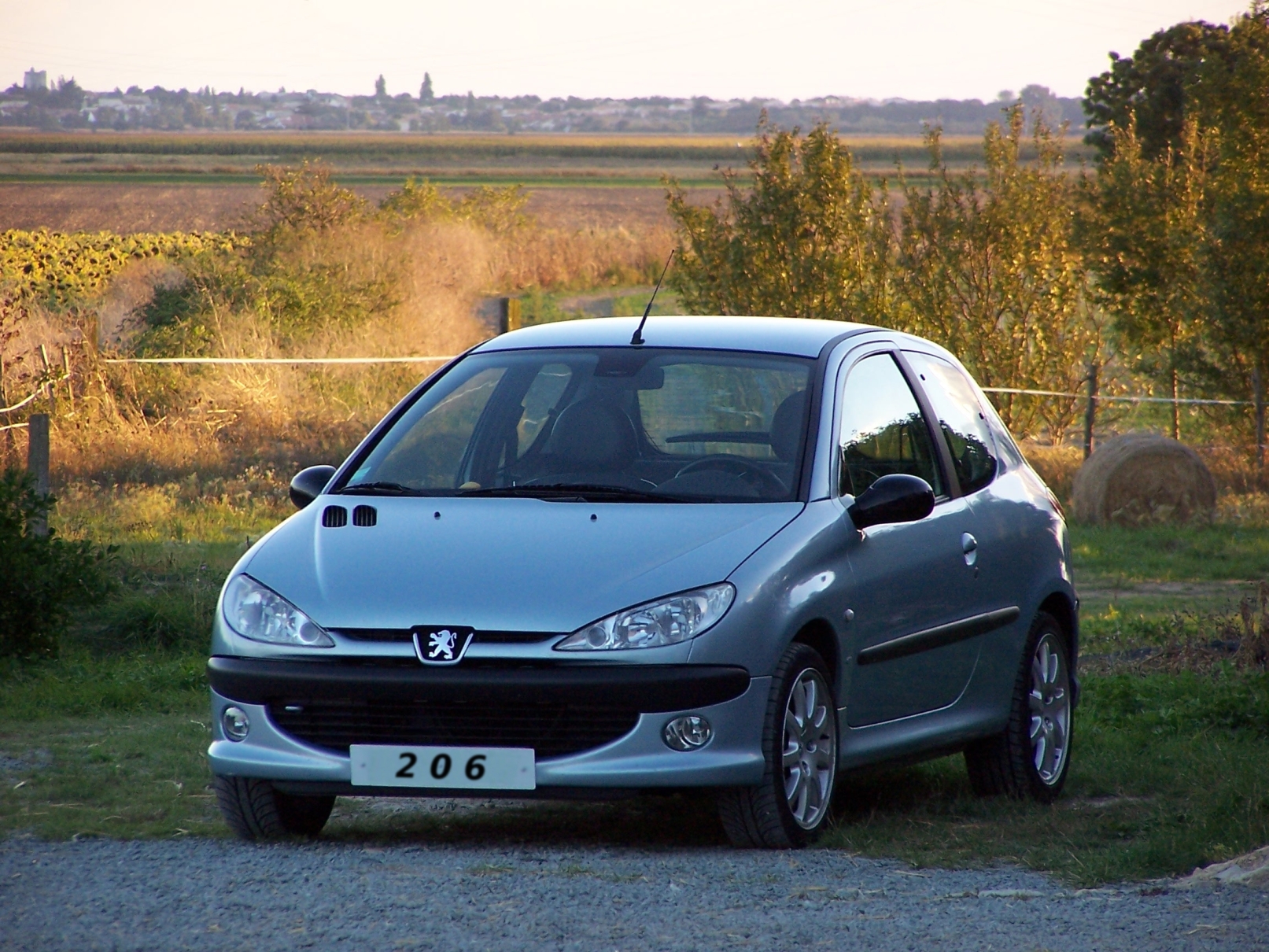 The immediate predecessors PEUGEOT 307 — PEUGEOT 206 (top) and PEUGEOT 306 (below)
Matching PEUGEOT 307 with the most popular in Europe “classmates” — the VOLKSWAGEN GOLF and FORD FOCUS with a 1.6-liter engine shows that the speed and dynamic qualities of the PEUGEOT 307 is clearly ahead of rivals, he is superior to them and the total rating on the basis of the subjective opinions of testers, including evaluation of design, ergonomics, cabin comfort and driving properties.
This car has become the main novelty of the company Peugeot in 2001. Their origin it leads from PEUGEOT 206 — even in appearance resembles the model — however, somewhat increased. In the production of this car uses a new unified platform, which will be the same for all models of PEUGEOT and CITROËN European size class C. While available in three – and five-door PEUGEOT 307, however, the planned release of two more models with a body “sedan” and “universal”, as well as models of PEUGEOT 307СС convertible coupe/convertible.
The increase compared to the predecessor of the cabin made the PEUGEOT 307 is substantially more comfortable. Driver’s seat ergonomics are very well thought out massive chair, covered with velvet, has three adjustments (by the way, it can be pushed back so that the driver of the height 185 cm will not touch the pedals!); the gear lever is not as the long stroke than the 206-th model, and gear shifts are easy and clear; the pedals are comfortable enough, and their progress and effort they are suitable for any driver. 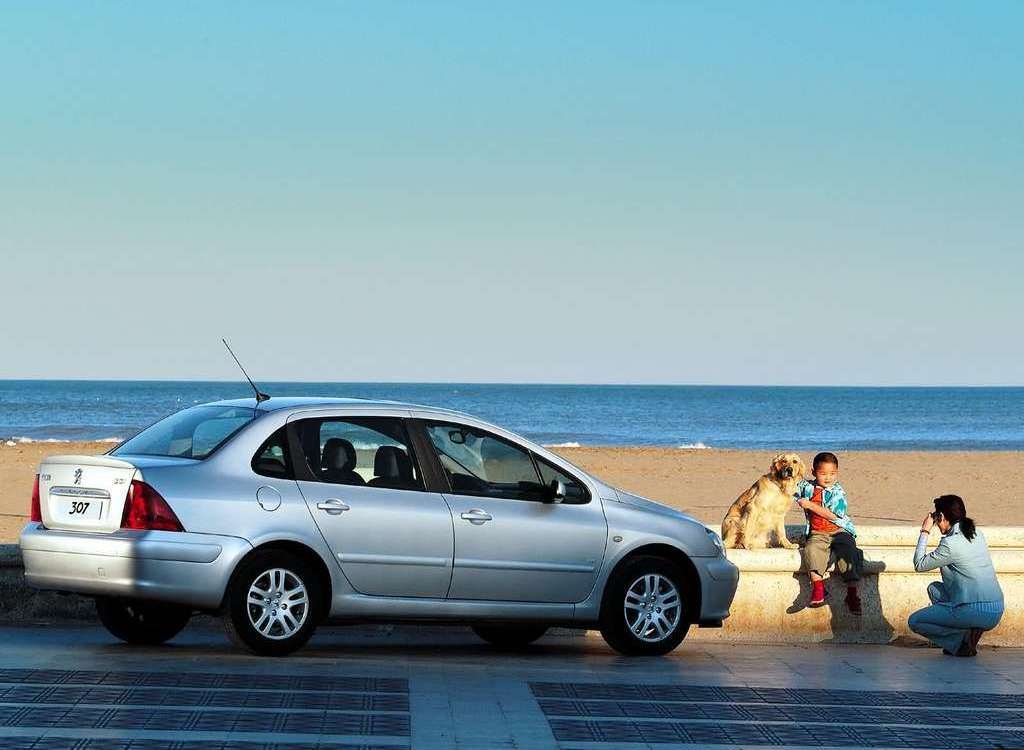 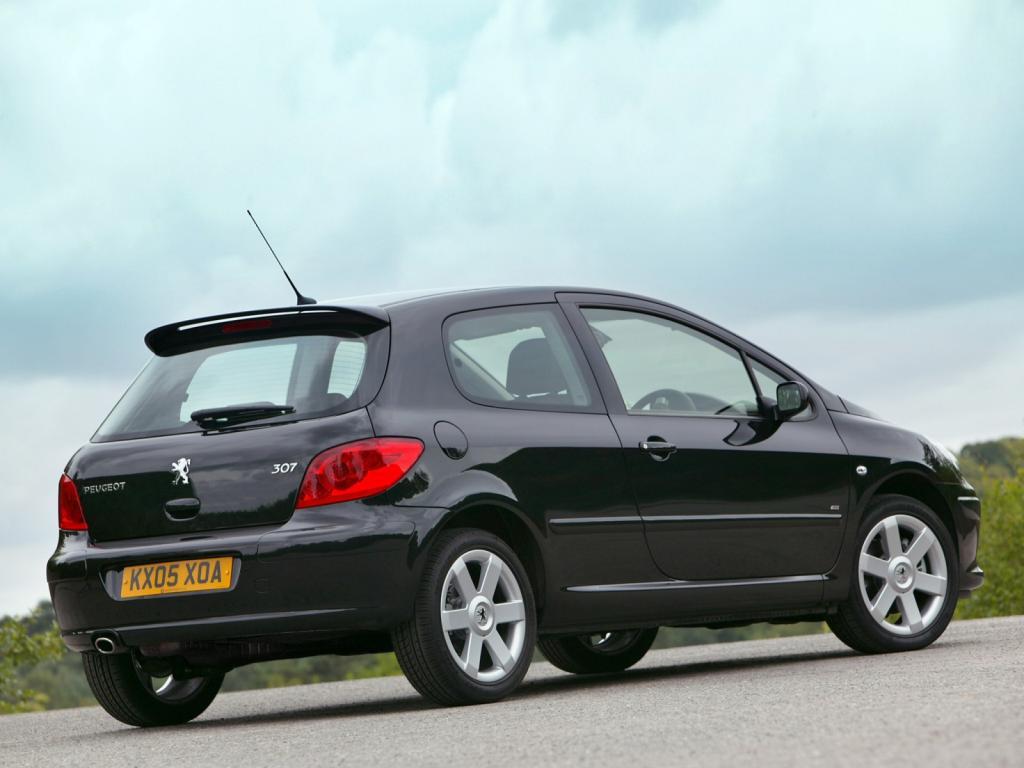 “European car of 2002” PEUGEOT 307 — door (top) and five-door (bottom)
Whether you can sit on the rear seat between the front seats and the knees of the passengers always remains a decent amount of space. And the passage to the rear seats is big enough — it is provided by wide rear door.
It should be noted that the PEUGEOT 307 is probably the most spacious trunk in its class — its useful volume is 0.34 m3, and with the rear seats folded — 1.33 m3!
On the part of the passive safety PEUGEOT 307 claims to be the leader among cars in its class — as part of its basic equipment includes six(!) airbags. Upon impact, the back frame and the seat mounting do not allow the back to lean on a dangerous corner, also in the frame of each of the front seats built-in mechanism that when a rear impact the head restraint moves forward, which reduces the risk of damage to the cervical vertebrae. The front seatbelts have pyrotechnic pretensioners and force limiters, the latter is also equipped with left and right straps of the rear seat. In a frontal collision the steering column is folded, allowing the wheel to move forward by 50 mm, it gives the driver to protect the face from impact.
I wonder how the PEUGEOT 307 wiper — brush he moved not parallel to each other, and a counter (such windshield wipers are known as butterfly “butterfly”), while the huge windshield area of about 1.5 m2 produced only minimal dead zones. The brushes have different lengths of 650 and 700 mm, and in the off position, “stacked” in a niche of the hood at the windshield of one another, overlapping. 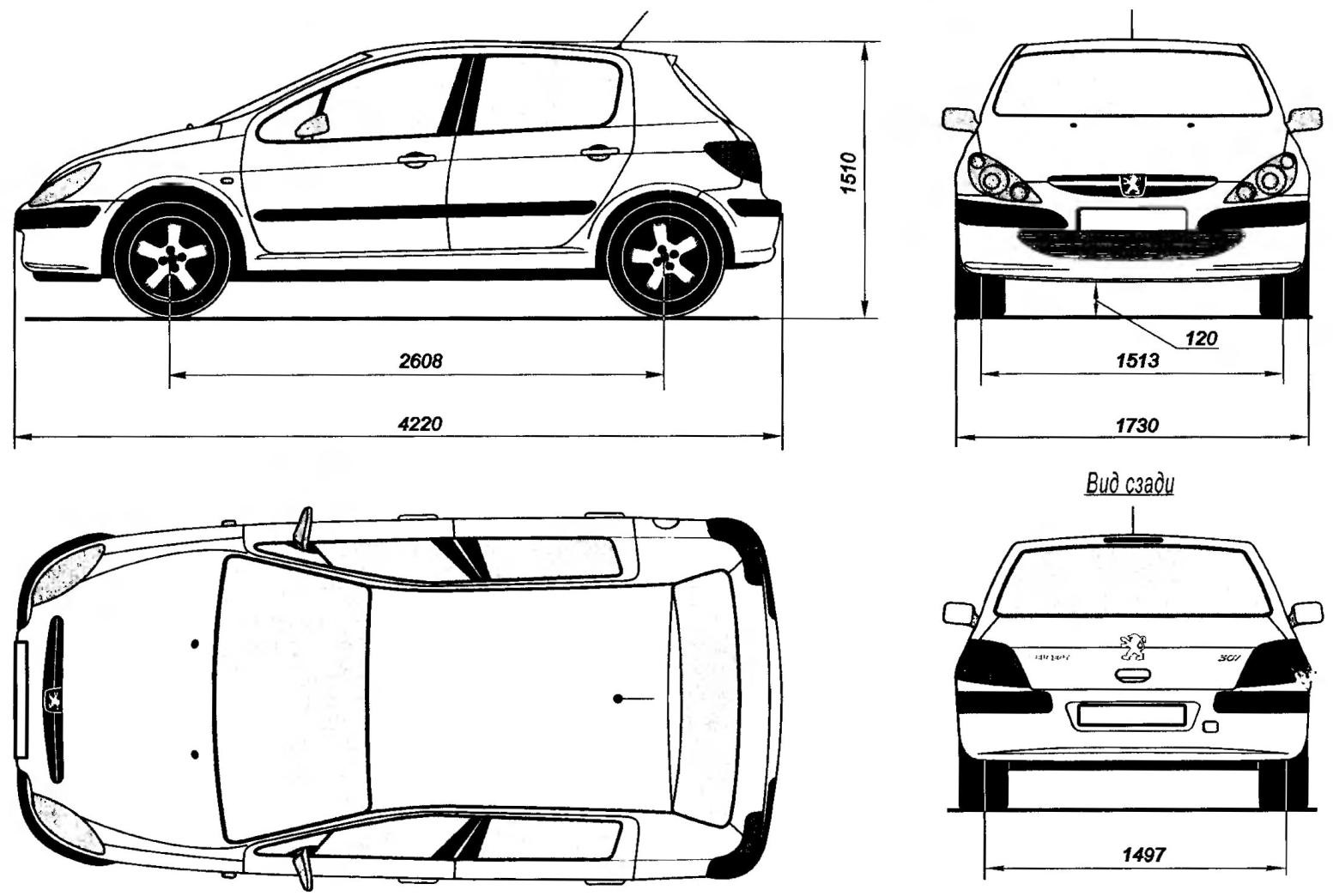 The geometric scheme of the five-door PEUGEOT 307 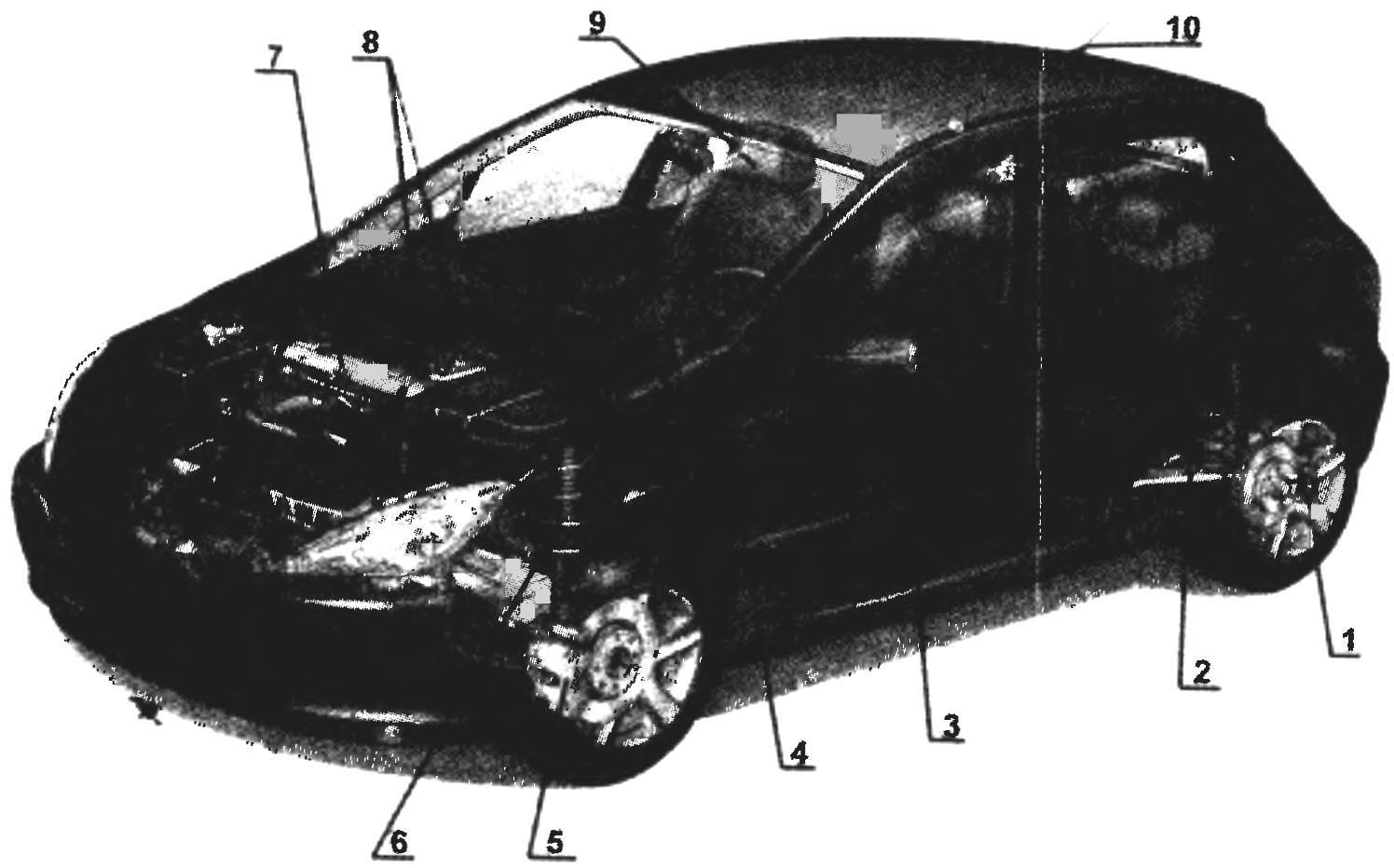 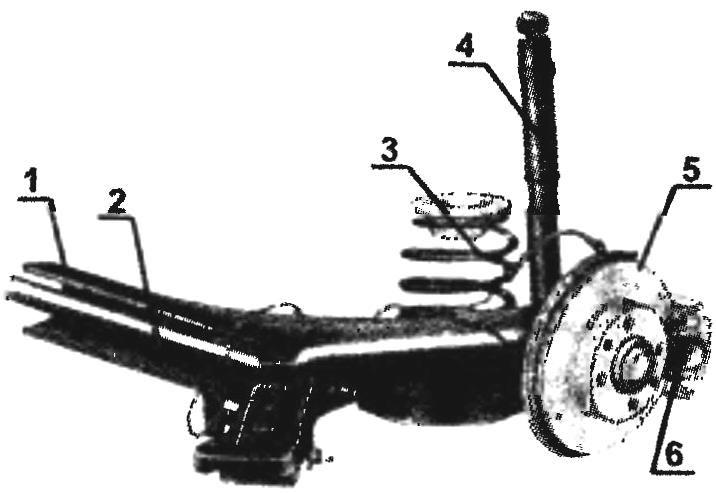 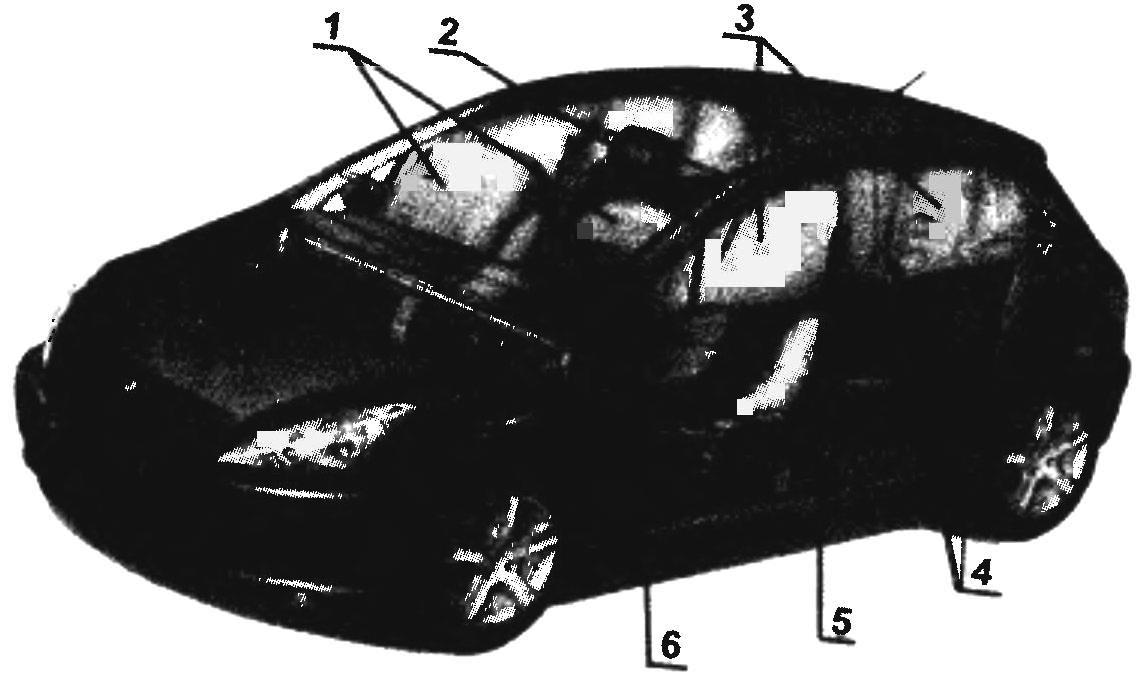 Basic restraint system PEUGEOT 307:
1 — front airbags; 2 — active headrest of the front seat (when a rear collision it moves forward, which reduces the risk of damage to cervical vertebrae); 3 — side airbags-curtain; 4 — seat belts rear seats with pyrotechnic pre-tensioners and force limiters; 5 — front seat belt with pyrotechnic pretensioner and force limiter tension; 6 — steering wheel with “broken” the steering column (in case of accident the steering wheel can be moved forward by 50 mm)
The driver
Front suspension — independent, on the guides of the spring strut (McPherson-type) is a little different in design from the suspension of the PEUGEOT 306, the only novelty — modified lower control arms, l-shaped. The design of the rear suspension, in comparison with their predecessors, have changed radically in the PEUGEOT 307, the developers refused from the torsion bars as elastic elements and switched to the popular for such machines spring semi-independent scheme with the torsion crossmember.
Steering gear PEUGEOT 307 — type “gear-rack”, it is fixed on the frame suspension. This provides a more accurate response of the machine to the control actions. The wheel is equipped with electro-hydraulic booster type hydraulic pump which is driven by an electric motor. However, the performance of the pump varies depending on the speed of the machine, which leads to a change of the reactive force on the wheel; the higher the speed, the “heavier” the steering wheel.
Brakes and front and rear wheels PEUGEOT 307 — disc, with front discs — ventilated. In addition, the machine is equipped with anti-lock brake system BOSCH 5.3 type and EBD — electronic brake distribution efforts. It provides electronic limited slip differential ASR, and the dynamic stabilization system when driving the EPS. In case of emergency braking with higher deceleration 8 m/S2 is automatically activated alarm — this innovation was first tested on the PEUGEOT 607, can significantly reduce the risk when braking, the rear impact.
By the way, to a minor accident occurring with PEUGEOT 307, does not become ruinous to their owners, car makers have applied a range of highly effective design solutions. In particular, the front wings of the car are molded not from traditional steel sheet and elastic plastic; quite expensive block lights are fixed in their places with special clips so that in case of a slight collision lights and sites of attachment remain intact; in addition, the integrated form of the bumper such that when the accident to protect against deformation of the aluminum hood of the car.
Gamma power units, which are installed on the PEUGEOT 307, includes seven variants. The basic specification presented on the PEUGEOT 307XR PRESENCE, has one of the most common models of firm Peugeot 1.4-liter engine with 75 HP and five-speed manual transmission. More powerful 16-valve “Quartet” working volume of 1.6 and 2.0 liters and output of 109 PS and 136 can operate with manual gearbox and a multi-mode hydromechanical automatic Porsche Tiptronic, which has nine operating modes, including sports, winter and manual. There is a modification with two turbo-diesel HDI family working volume of 2,0 l and capacity of 90 and 109 HP, working in conjunction with a manual transmission.
Models with different levels of equipment are marked with the relevant letter index. As already mentioned. the basic version carries the designation of PEUGEOT 307XR PRESENCE, its equipment includes six airbags, adjustable in two directions steering column, five head restraints (on all seats), height adjustable drivers seat, folding rear seat, electric Windows for front doors, Central locking with remote control, air conditioning and glove compartment-a refrigerator.
The following modifications — PEUGEOT and PEUGEOT 307XS 307XS PREMIUM is additionally equipped with alloy wheels, fog lamps, climate control, trip computer, rain sensor wipers, heated rear view mirrors, armrest, spectacle case and, finally, a sound system with a CD player.
Still more “fancy” version of cars – PEUGEOT and PEUGEOT 307ХТ 307ХТ PREMIUM. These modifications instead of aluminum decoration design interior “insert subtree”, and the seats are covered with velour.
Technical characteristics of the car PEUGEOT 307 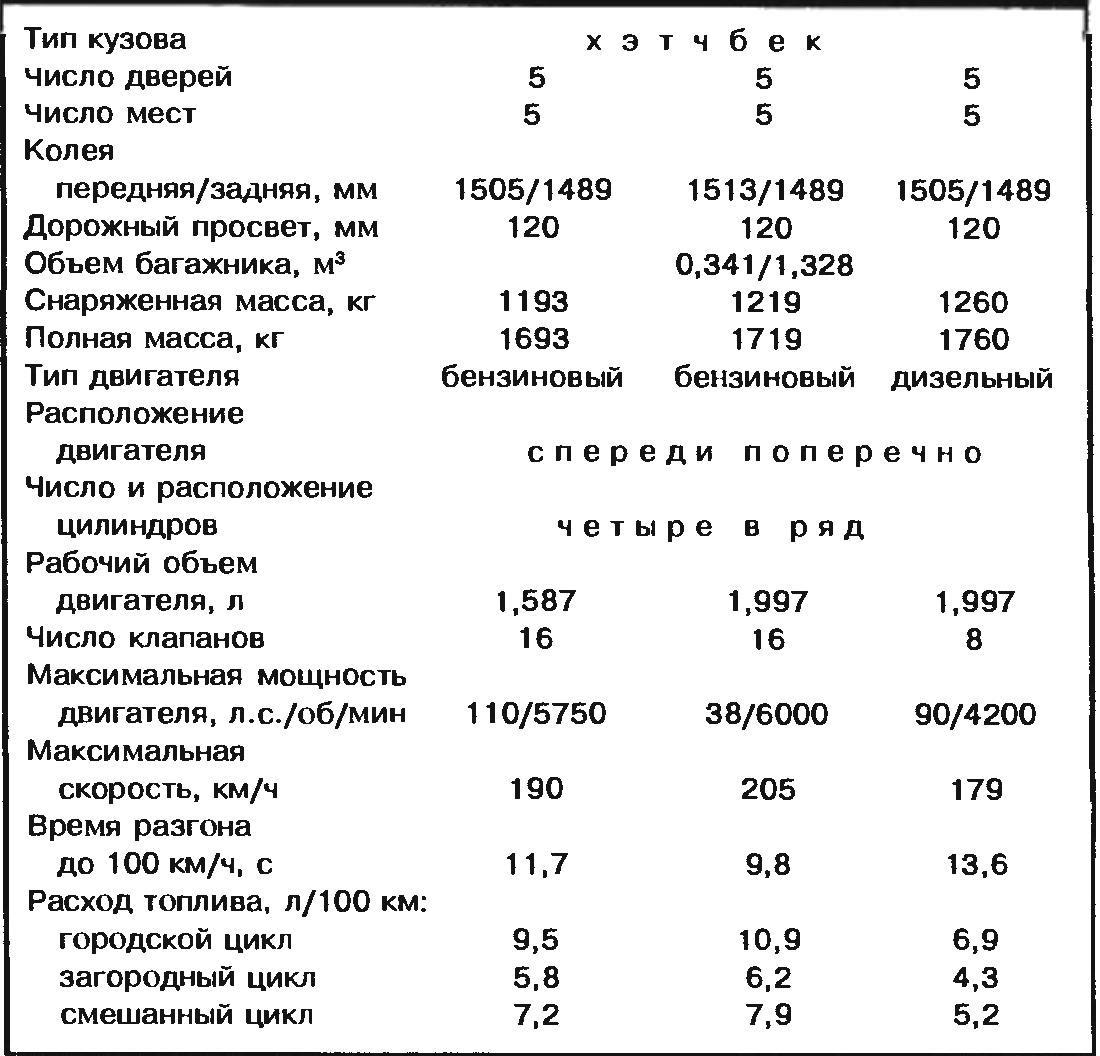 Three – and five-door “top model” PEUGEOT 307XSi available only with two-liter engine; they are equipped with 17-inch wheels with alloy wheels, “sport” leather seats, is located on the front panel of the CD changer for five discs and other equipment.
Recognition PEUGEOT 307 “European car of 2002” was not only a great achievement of the company Peugeot, but the winning concept car of a Golf class. Mass customers are increasingly “vote with their wallet” in favor of these machines, and in pursuit of him the car of different companies in recent years, closer to agree in the choice of parameters of car-class Golf, their appearance and equipment. And it goes primarily for the benefit of the consumer, receiving comfortable, safe and carefully crafted cars.
I. EVSTRATOV