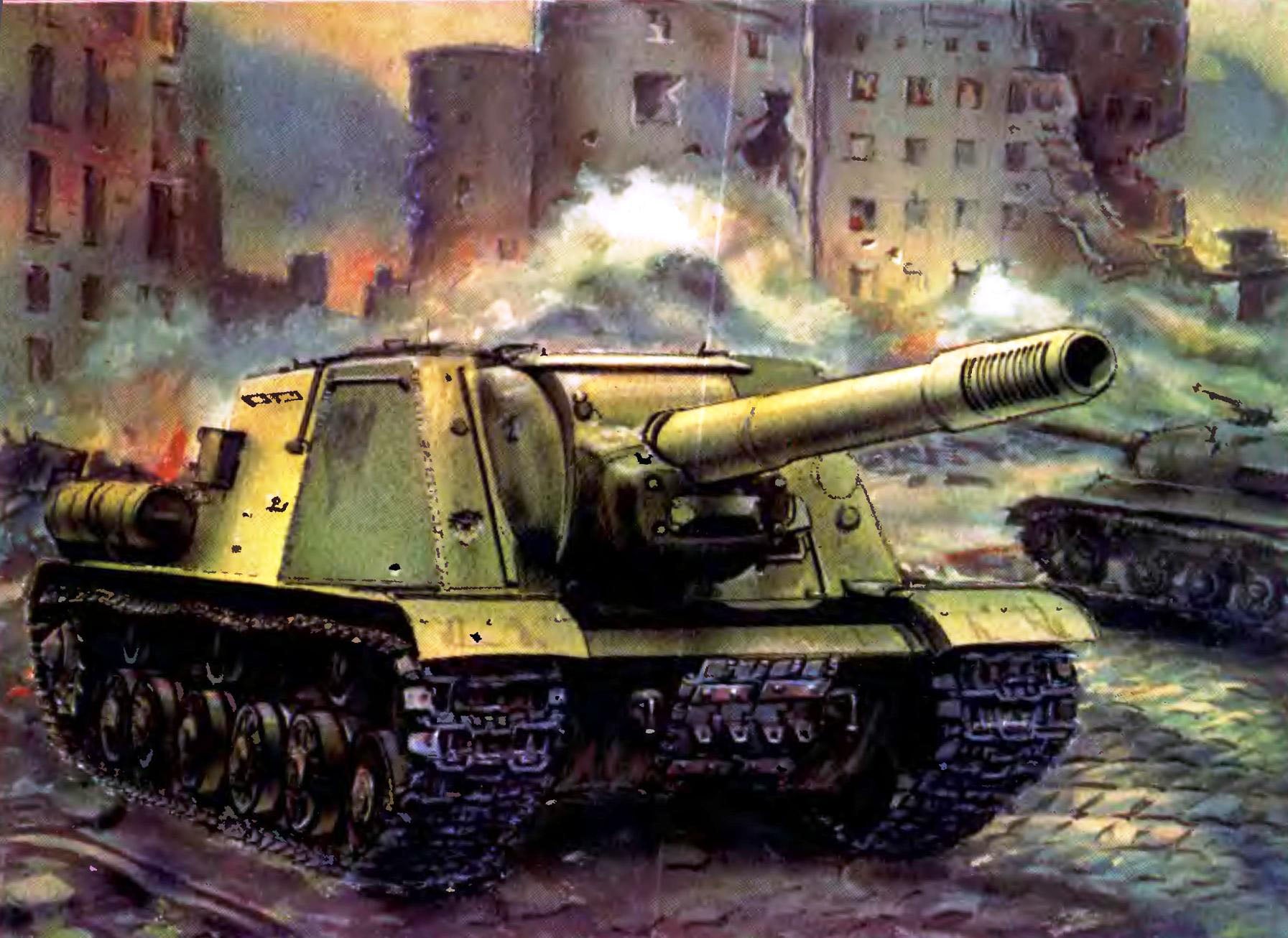 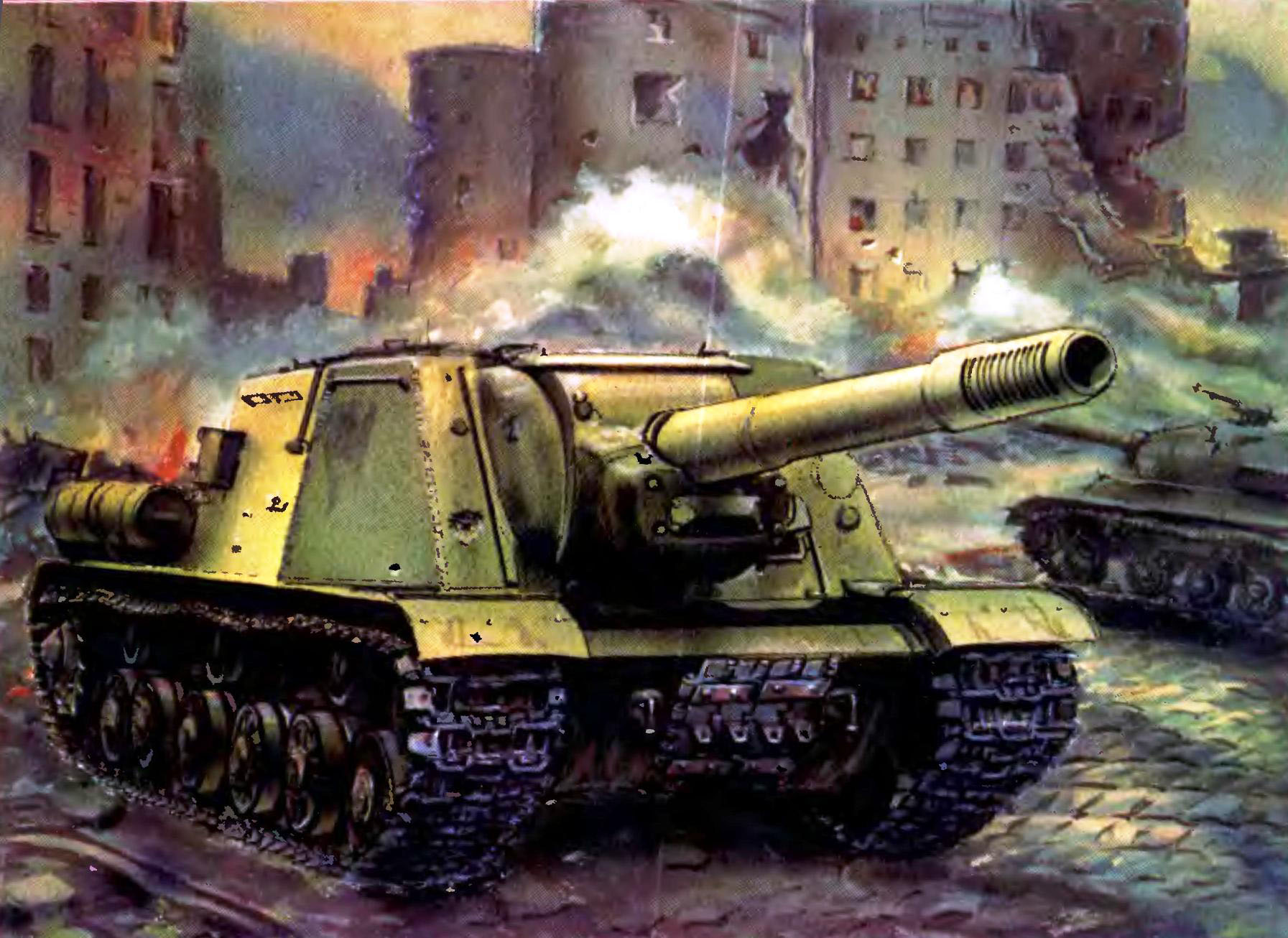 The resolution of the State defense Committee 4043сс dated 4 September 1943, ordered the pilot plant No. 100 in Chelyabinsk in cooperation with the technical office of the Chief armored Directorate of the red Army until November 1, 1943 to design, manufacture and test ordamaged EC-152 on the basis of the is tank. Its immediate predecessor — the self-propelled gun SU-152 (KV-14), the basis for which was the KV-1s.

Self-propelled gun SU-152, adopted at the 14 February of 1943, was in mass production until the beginning of 1944. The appearance of these machines in the battle of Kursk was a nasty surprise for the Germans. Massive 152-mm armor-piercing projectile (48,8 kg), fired from a distance of direct shot of 700-750 m, was pulled up the tower with “Tiger”. Just then a heavy artsmode got the soldiers a respectful nickname Zveroboy.
Needless to say that the military wanted to have the same self-propelled gun on the basis of a new heavy tank, the KV-1s with the production was filmed.
The layout is-152 (object 241), later known as the ISU-152, the fundamental innovations were not different. The tank’s turret made from rolled sheets were installed in front of the body, combining in one volume the office management and combat. The thickness of its frontal armor was more than the SU-152: 60-90 mm vs. 60-75.
Howitzer-gun ML-20S 152 mm caliber mounted in a cast frame, who played the role of the upper machine guns, and defended the same cast armor mask, borrowed from the SU-152. Oscillating part of the self-propelled howitzer-guns have minor differences compared to the field, including a hinged tray for ease of loading and flap with the trigger mechanism, the handle flywheels lifting and rotary mechanisms were the gunner on the left while the machine axle is brought forward for a natural balance.
Ammunition consisted of 20 rounds of separate loading ammunition, half of which — armor-piercing-tracer shells BR-545 weight 48,78 kg and half — high-explosive grenades and cannon OF 545 weight of 43.56 kg. For direct fire served as a telescopic sight ST-10, for firing from concealed positions — panoramic sight with independent or semi-independent line of sight from field howitzer-gun ML-20. Maximum elevation guns was +20°, declination -3°. At a distance of 1000 m armor-piercing shell penetrated a 123-mm armor.
For machines parts for anti-aircraft turret commander’s hatch mounted 12.7-mm DShK model 1938.
Powerplant and transmission were borrowed from the tank is-2 and included a 12-cylinder four-stroke the demon-compressor diesel liquid-cooled IN-2ИС (- 2-10) capacity of 520 HP at 2000 Rev/min., multi-disc main clutch dry friction (steel on ferrodo), vosmichastny four-way gear box with dual, two-stage planetary rotation mechanism with locking frictions and two final drives with planetary.
Suspension of ACS in relation to the same Board consisted of six double cast rollers with a diameter of 550 mm and three support rollers. Drive wheels rear layout had two removable ring gear with 14 teeth each. Guide wheels — alloy, with a crank mechanism for track tensioning.
Suspension — personal torsion.
Caterpillar steel melkopilchatye, 86 odnoklubnik tracks each. Truckee stamped, with a width of 650 mm and a step 162 mm cycloid Gearing.
The combat weight of the ISU-152 was 46 so
The maximum speed reached 35 km/h, cruising range is 220 km On machines installed radio 10P or 10РК and intercom TPU-4-bisf.
The crew consisted of five people: commander, gunner, loader, breech operator and driver.
In early 1944, the production of ISU-152 was constrained by the lack of guns ML-20. To get out of this situation, the artillery plant No. 9 in Sverdlovsk, put the barrel of the 122 mm corps gun A-19 in the cradle guns ML-20S and the result was heavy hartswood the ISU-122 (object 242), which is due to the greater initial velocity armor — piercing projectile- 781 m/s represented an even more effective antitank weapon. than the ISU-152. Ammunition of the machine increased to 30 rounds.
Since the second half of 1944, some ISU-122 began to set the gun D-25S wedge semi-automatic breech and muzzle brake. These machines were designated ISU-122-2 (site 249) or ISU-122C. They differed from the recoil system, cradle and a number of other elements, in particular, the new cast resin mask with a thickness of 120-150 mm. gun Sights — telescopic TS-17 and the panorama of Hertz. The convenient location of the crew in the fighting compartment and semi-automatic guns has contributed to increasing the rate of fire of 3-4 rounds/min, compared to 2 RDS/min on a tank is-2 and self-propelled guns ISU-122.
From 1944 to 1947 was made 2790 self-propelled ISU-152, 1735 — the ISU-122 and 675 ISU-122C. Thus, total production of heavy Artamonov — 5200 pieces — exceeded the number of manufactured heavy tanks is — 4499 units. It should be noted that, as in the case of IP-2, self-propelled guns on its basis was to connect the Leningrad Kirov plant. To 9 may 1945 there were collected the first five ISU-152, and by the end of the year the next hundred. In 1946 and 1947, production of the ISU-152 carried only on the LB.
In the spring of 1944, heavy samomoderirovanie regiments SU-152 rearming installations ISU-152 and ISU-122. They were transferred to the new States and all were awarded the title of guards. By the end of the war was formed of 56 regiments such, each was in machine 21 ISU-152 or ISU-122 (part of these regiments had a mixed composition of machines). In March 1945, formed the 66th guards heavy self-propelled artillery brigade trehosnovnogo composition (1804 person, 65 ISU-122, 3 SU-76).
Heavy self-propelled artillery regiments imparted to tank and infantry units and formations, primarily used to support infantry and tanks in the attack. Following in their combat formations, self-propelled guns destroyed the enemy firing points and provided the infantry and tanks a successful promotion. In this phase of the onset of ACS has become one of the main means of reflection Panzer counterattacks. In some cases, they had to get ahead of the combat formations of his troops and take the hit, thus ensuring the freedom of maneuver of the supported tanks. 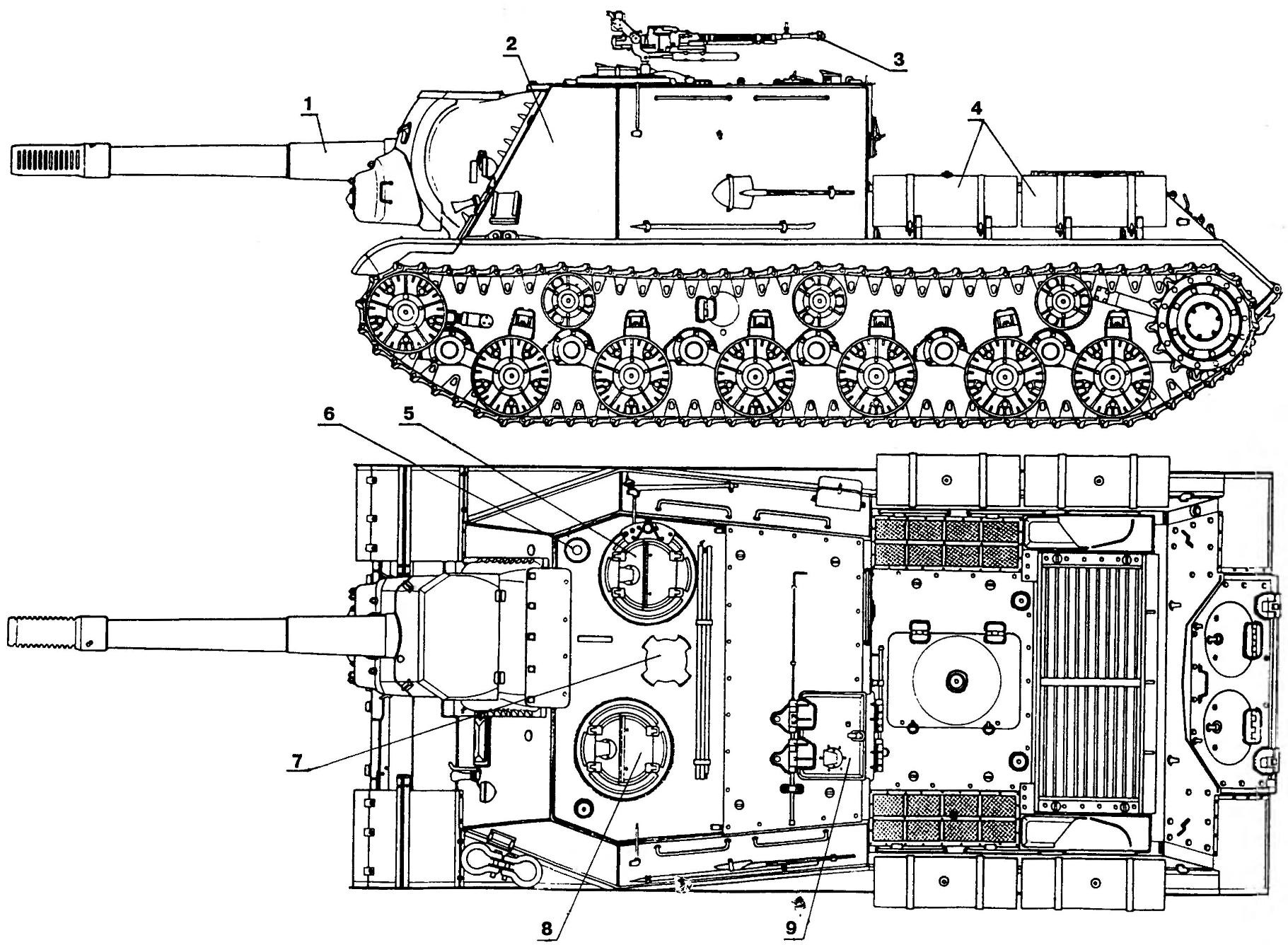 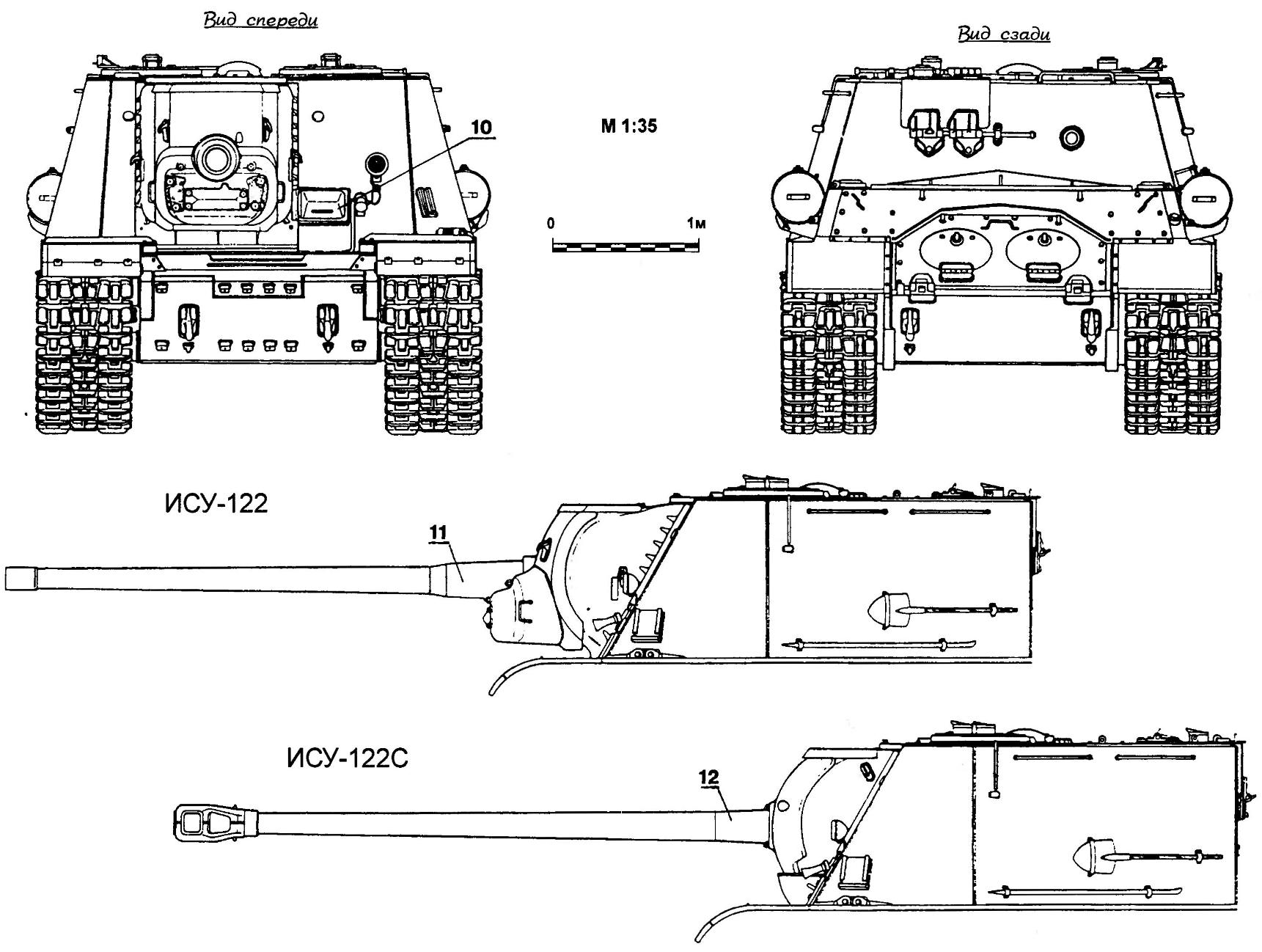