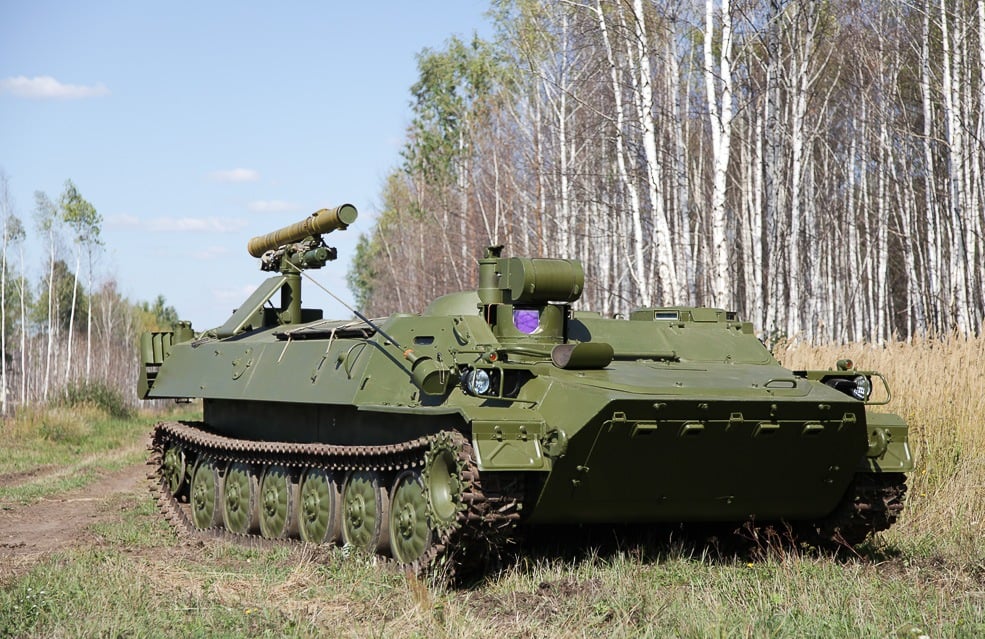 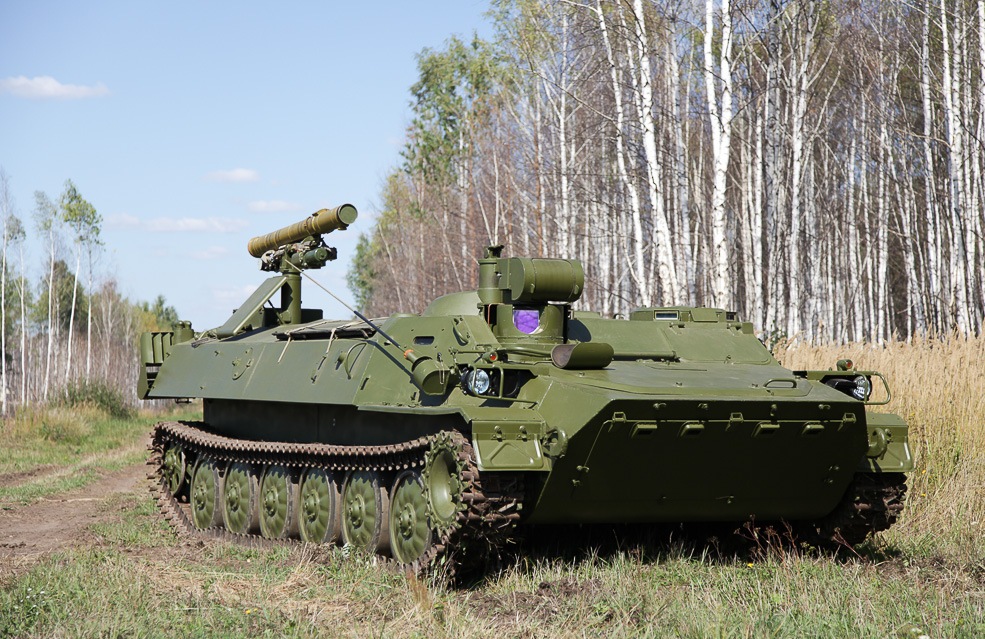 The first domestic anti-tank missile system (ATGM) was “bumblebee”, developed in Kolomna SKB engineering under the guidance of S. P. Invincible. However, quite a large mass and a decent size anti-tank guided missile (ATGM) ЗМ6 from the beginning forced the designers to focus on the self-propelled version. And since 1957, at the same time developed two sample latest: 2K15 on the basis of army all-terrain vehicle GAZ-69 (army 2П26) 2K16 and on the basis of BRDM (combat vehicle 2П27). The calculation of both launchers consisted of two people, the rate of fire of two shots per minute, control system — manual, wires. The complex “bumblebee” was adopted in August 1960 and immediately launched into serial production.
In parallel with “Bumblebee” in the OKB-16 under the leadership of A. E. Nudelman has developed a radio command complex “Phalanx” missile ЗМ11. In 1960, this complex along with war machine 2П32 created on the basis of BRDM, was also adopted.
The first Russian anti-tank systems passed the test of combat in the middle East, as well as the most popular Soviet antitank system of the 60-70-ies of the “baby”, which was produced in portable version. It was mounted on combat vehicles, created on the basis of the BRDM and BRDM-2 and BMP-1. During the Arab-Israeli war of 1973 the missile complex “baby” was struck by more than 800 Israeli tanks.
However, due to manual control anti-tank missiles of the first generation were quite effective only at ranges of about 1000 m and had the low speed. On the agenda stood the question of the establishment ATGM with semi-automatic guidance system.
In the early 70-ies adopted a system of managed anti-tank weapons developed by the Tula instrument Design Bureau (KBP). It included wearable ATGM “Fagot” and propelled “the Competition”. On the firing range both complexes could replace not only ATGM “baby”, but more heavy ATGM “Phalanx”. However, to replace the last, almost simultaneously with the beginning of works on complex “Competition”, in the Kolomna Bureau of machine building (formerly SKB) started to be developed ATGM “Storm”.
The fact that the missile complexes “Fagot” and “Competition” subsonic. The requirement is supersonic speed for long-range anti-tank was motivated by the tactical considerations. The duration of the flight subsonic ATGM at a distance of 5 km was about half a minute. During this time, with timely detection of missile launch, the enemy tank could hide behind a smokescreen or fire position ATRA, crippling and operators, and the complex itself, since the projectile speed is many times the speed of a rocket. Finally, the tank could just hide behind terrain, buildings or groups of trees.
The complex “Storm” was developed in two variants: self-propelled “Sturm-C” for the army and helicopter, “Sturm-In” for army aviation. 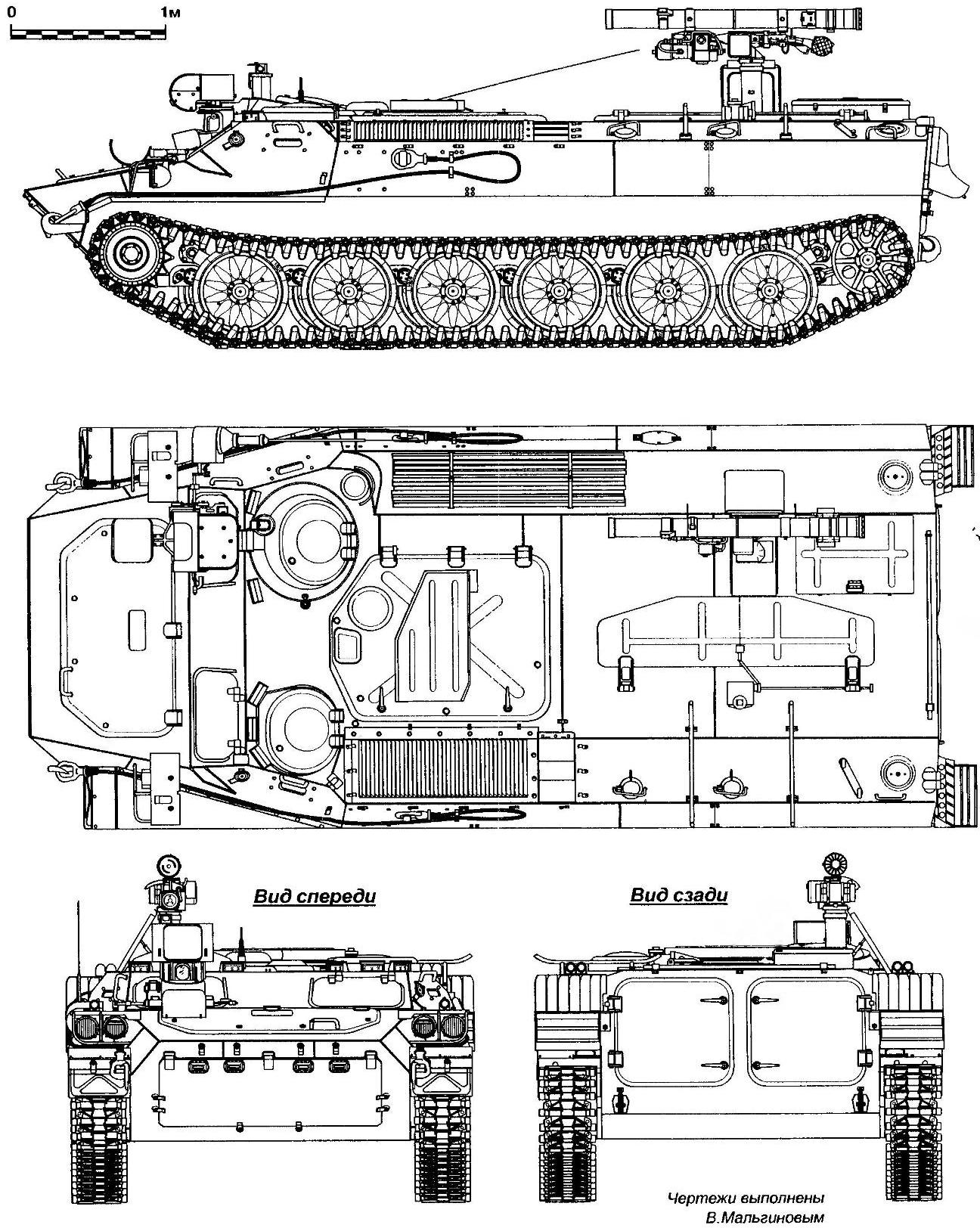 Combat vehicle 9P149 complex “Sturm-C”
In the complex “Sturm-C” is applied to the multi-purpose guided missile 9M114 with a monobloc shaped-charge warhead is covered with a fairing ogive shape. It is made on the aerodynamic configuration “duck” with folding front plumage and a semi-circular wing which in the inoperative position is pressed to its cylindrical body. In the rocket used solid-fuel dual thrust engine, providing high speed of up to 530 m/s While its penetration is 560-600 mm. In the stern of the pipe transport and launch container (TLC) is placed starting the accelerator — overclocking engine, separated from the rocket at the end of his work. Like other second generation anti-tank missile complex “Storm” comes from the manufacturer and operated in the army in fiberglass TPK, the design of which gives the rocket’s axial rotation during the launch. In addition, the container allows to store in it the rocket up to 10 years.
Complex “Sturm-C” can be equipped with guided missile 9М114Ф with the explosive, or rather, thermobaric, that is volume-detonating warhead. This gives you the ability to destroy enemy manpower and destroy pillboxes and other engineering structures.
In connection with the appearance of the tanks with dynamic protection has created a new missile with a tandem warhead, which has increased range and is able to guarantee hitting these tanks, penetrating the armor equivalent to 800-mm homogeneous.
The guidance system of the missile is semi-automatic, radio command, with an infrared signal tracking the control commands are transmitted into the front compartment of the rocket cables in the pipe along the longitudinal axis of the combustion chamber of a solid propellant sustainer engine. For dvuhmetrovym the engine block in the tail section are the basic elements of radio command control system. At the rear end of the sustainer stage is a source of infrared radiation, fixed ground or helicopter equipment semi-automatic control, and antenna. The guidance system has high noise immunity due to the use of hovering missiles two special codes and five fixed frequencies. It should be noted the fact that due to the supersonic speed with which the rocket flies, it is impossible to put the interference current means.
For fire control developed a special program mode (“Dust”) that allows the rocket to the initial segment of the trajectory to fly above the line of sight, and when approaching the tank at a distance of 500-700 meters down and hit the target.
As a base for combat vehicle 9P149 complex “Sturm-C” is used proven in the armed forces multipurpose light armored Transporter-tractor MT-LB, serially produced at the Kharkov tractor plant. Than the former in the complex “Konkurs” wheeled chassis family, BRDM-2, this machine has a high maneuverability and an internal volume sufficient to accommodate the retractable launchers (PU) and automated device loading. The ammunition consists of 12 missiles, this despite the fact that TPK “Assault” in length more than one and a half times higher than the TPK of the “Competition”.

The layout of 9M114 missile complex “Storm”:
1 — fairing; 2 — cumulative warhead; 3 — aerodynamic rudders; 4 — servos; 5 — combustion chamber main engine; 6 — radio command control system; 7 — antenna
Feature 9P149 combat vehicle — induced horizontal ± 85° and vertically from — 5° to +15°, the launcher is carrying only one TPK with a missile. In the stowed position PU retracts into the hull where the ammo rack mechanism (special rotating drum and gear). On the lodgment of the drum are 12 of the WPK with missiles. When shooting PU holds the container, and automatically translated into the firing position. After the shot used container is discarded to the side, and PU “dives” over the next. The process of reloading takes a time less than the duration of the flight of the missile to the target. In General for complex managed to provide a rate of fire 3-4 RDS./min. Optical sighting device placed on the roof of the car on the left side, with a built-in channel tracking an infrared emitter provides rocket shelling targets moving at flank speed to 60 km/h with a face velocity of 80 km/h it is Possible to launch missiles and position afloat when driving combat vehicles at a speed of 5 km/h On the highway a mass of 12.3 tons can reach speeds up to 70 km/h cruising range on fuel is 500 km.
The time of the transition of the complex into the firing position — 15, in the stowed — 12 S. Crew — two people.
In 1979, self-propelled antitank system “Sturm-s” was adopted by parts of the army and frontline managers. In the presence of the army more mass complex “Competition”, anti-tank systems “Storm” was considered as a means of suppression of the breakthrough of enemy tank units in the interior of our defense that is supposed to perform a function similar to that performed by anti-tank artillery Reserve of the Supreme command during the great Patriotic war. However, in this role the complex “Sturm-C” to be had. In the course of the antiterrorist operation in Chechnya in 1999 and 2000, the complex was mainly used for the destruction of long-gun emplacements of the enemy.
M. KNYAZEV