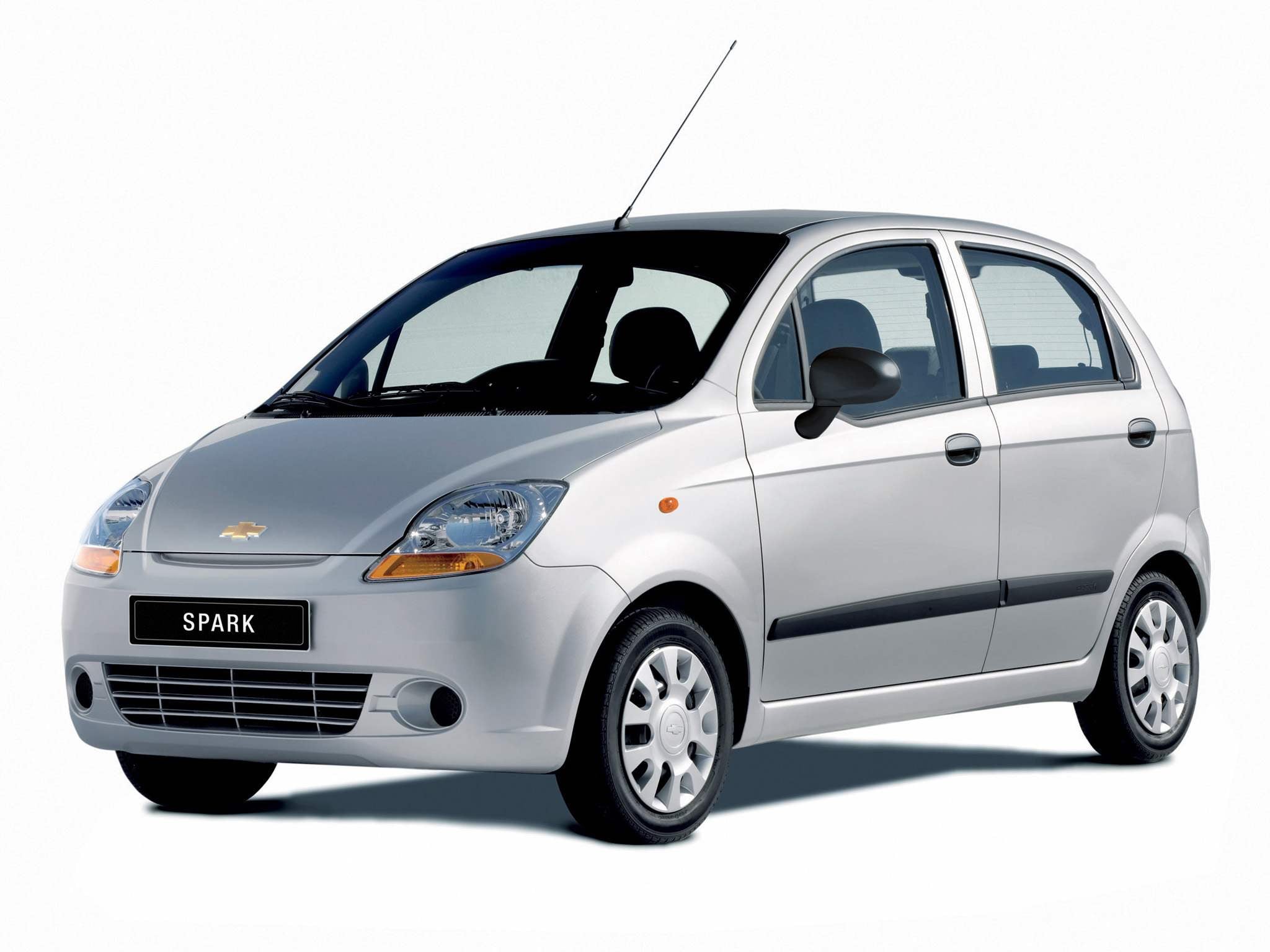 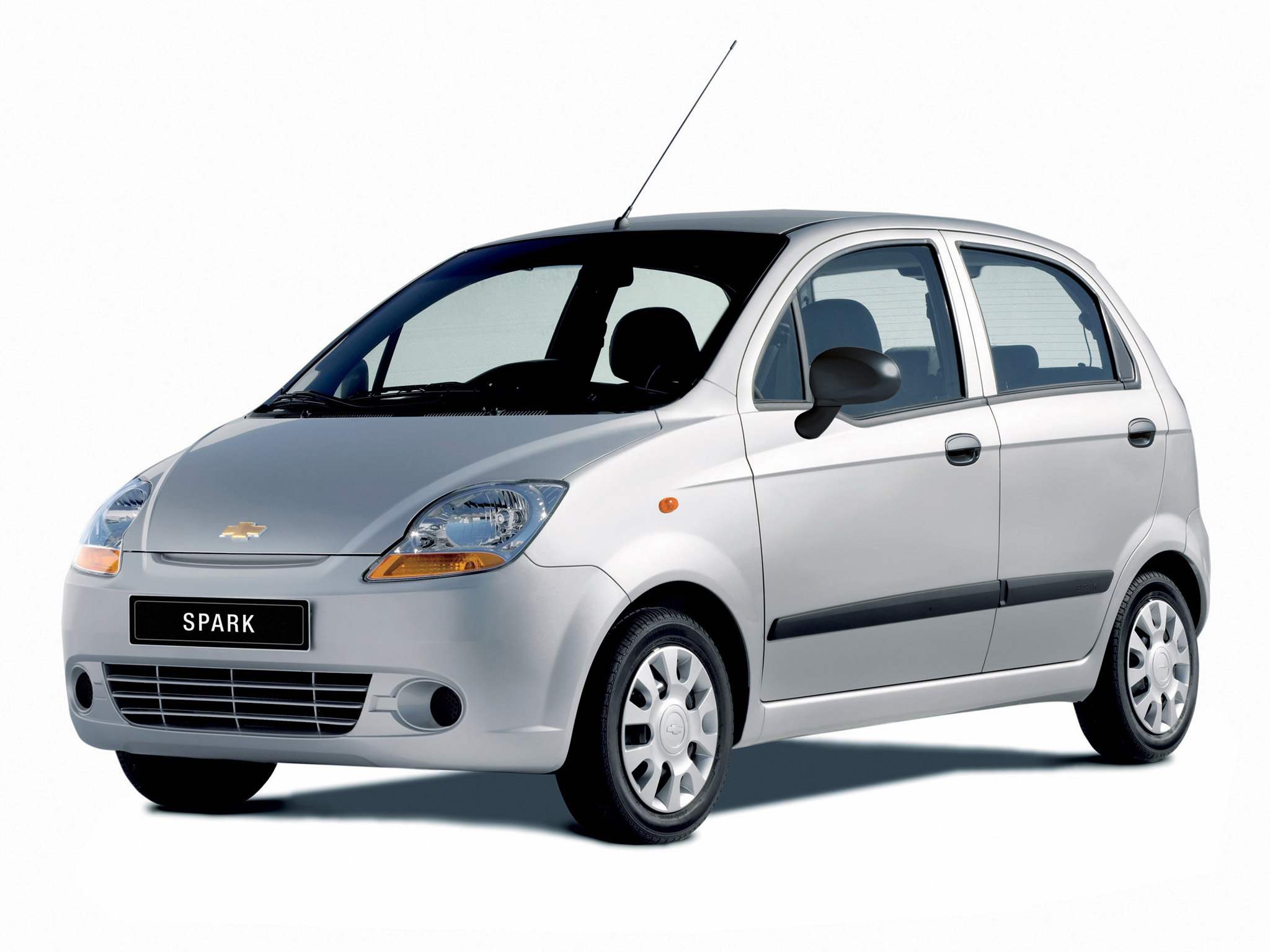 CHEVROLET SPARK is the compact car class A. And exhibitions, and the streets are compact cars always become the object of attention. At the international auto none full-size luxury car does not attract as much public, how many small, almost like a toy car. In our country this car is a Korean car DAEWOO MATIZ, the bulk of which in Russia started mainly after running it in series at the factory Uz-DAEWOO Auto in the Republic of Uzbekistan.

Joint venture to produce cars in the South Korean city of Pupyong was founded in 1972 by a local company, Shinjin Motors and U.S. group General Motors. In 1978, the shares bought by Shinjin powerful financial and industrial group Daewoo, and since 1983 a joint Korean-American enterprise began to carry the name Daewoo Motor.
A decade later, the cooperation of Daewoo and General Motors ended, and the car company was owned exclusively concern Daewoo.
In the second half of the 1990s, the leaders of the Korean group has taken a number of measures for the withdrawal of the private automobile production in number of leaders of world car industry by investing huge funds in development of production of four families of modern cars.
However, in 2001 the financial situation of Daewoo, which had to that time five factories in the Republic of Korea and eleven outside the country and producing a total of 2.3 million cars a year, has become critical. Concern-the bankrupt was offered for sale to foreign buyers. The main contenders for the purchase of Daewoo was an American Corporation Ford Motor and General Motors. Won last, paying for the purchase of 440 million dollars.
Many economists considered the deal risky, but in just three years, the head of the newly founded company GM Daewoo, Nick Reilly has managed to literally revive a dying company — in 2004 the car factories of GM Daewoo produced around 900 thousand cars — three times more than in 2002. And this year it is planned to produce over a million machines. By the way, from 1 January 2005, all the cars are GM Daewoo started to be supplied to Europe under the CHEVROLET brand, which is owned by General Motors. 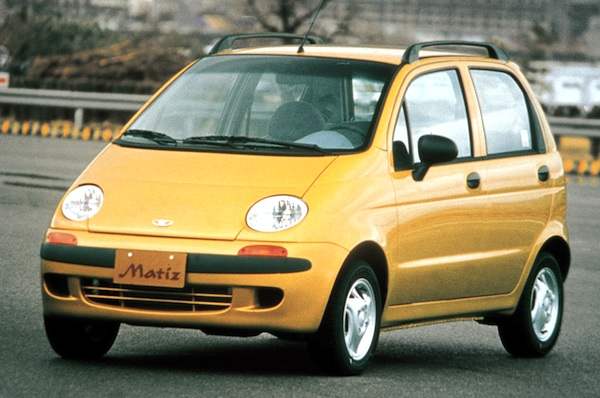 DAEWOO MATIZ edition 1997 — the predecessor of the CHEVROLET SPARK 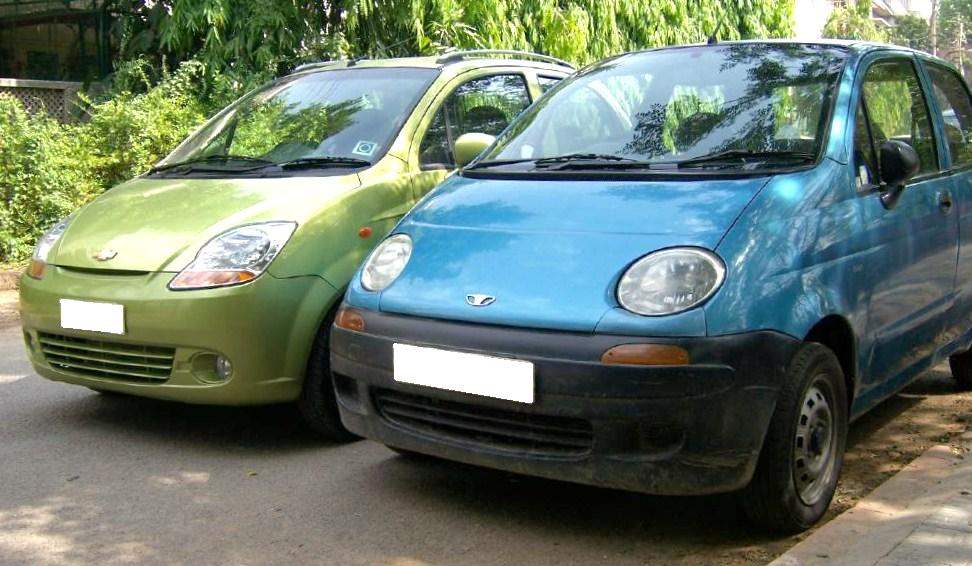 MATIZ and SPARK — feel the difference! 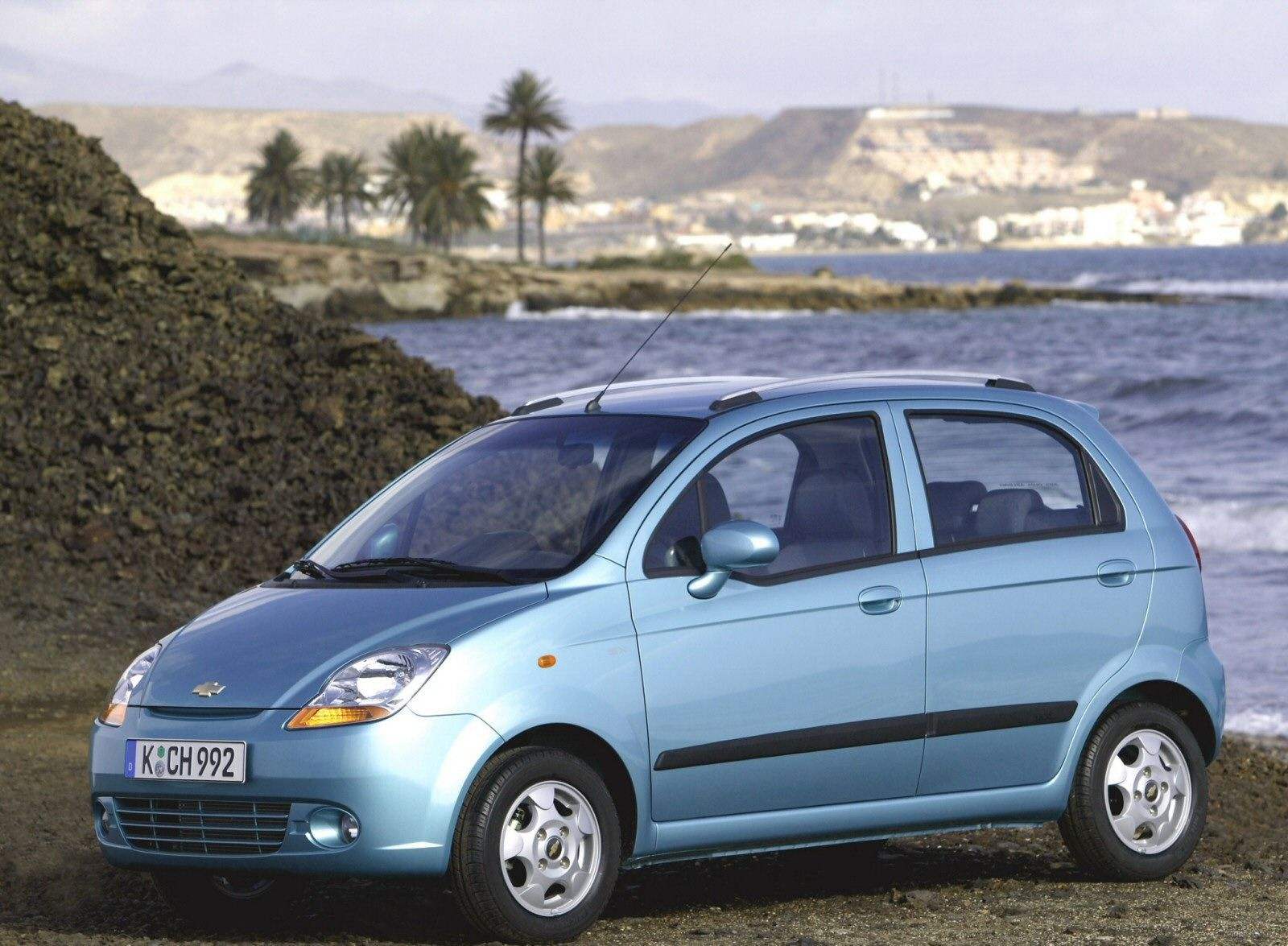 CHEVROLET SPARK release 2005 — the European car size class A
However, back in the 1980-ies, when the Korean company decided to develop the consumer sector, who preferred compact cheap car. The first car company Daewoo has become cheap and economical TICO that no body was unified with the Japanese five-door SUZUKI ALTO micro-car, only issue 1982. Shipped in our country, baby TICO, despite some similarities with Russian minicar VAZ-1111 “Oka”, differed from it by its greater reliability, comfort and speed. However, in the late 1990-ies “suitcase” style is not contributed to widespread TICO — youth (and, in the first place — her beautiful half!) prefer more elegant cars.
This car became DAEWOO MATIZ edition 1998, causing widespread sympathy compact car is quite a modern design developed in a bodywork Studio Italdesign Giugiaro, the famous Giorgetto. MATIZ was equipped with 3-cylinder engine working volume of 0,786 l and a power of 52 HP. it Should be noted that the engine was a motorcycle of engine capacity, but provides nevertheless a cruising speed of 110 km/h and could accelerate the car up to 144 km/h; average fuel consumption was 6.1 l per 100 kilometers.
In 2002, the car was upgraded — it has strengthened the body frame, which increased the passive safety of the car. Moreover, in addition to the 3-cylinder engine of the DAEWOO MATIZ was equipped with 4-cylinder 1.0-liter engine capacity of 66 HP and automatic transmission.
It is interesting that the DAEWOO MATIZ was one of the most popular cars in its class on the European market in 2004, the number of sales he had lost only a classmate FIAT PANDA. To date, the happy owners of this machine of steel, 1.3 million people! 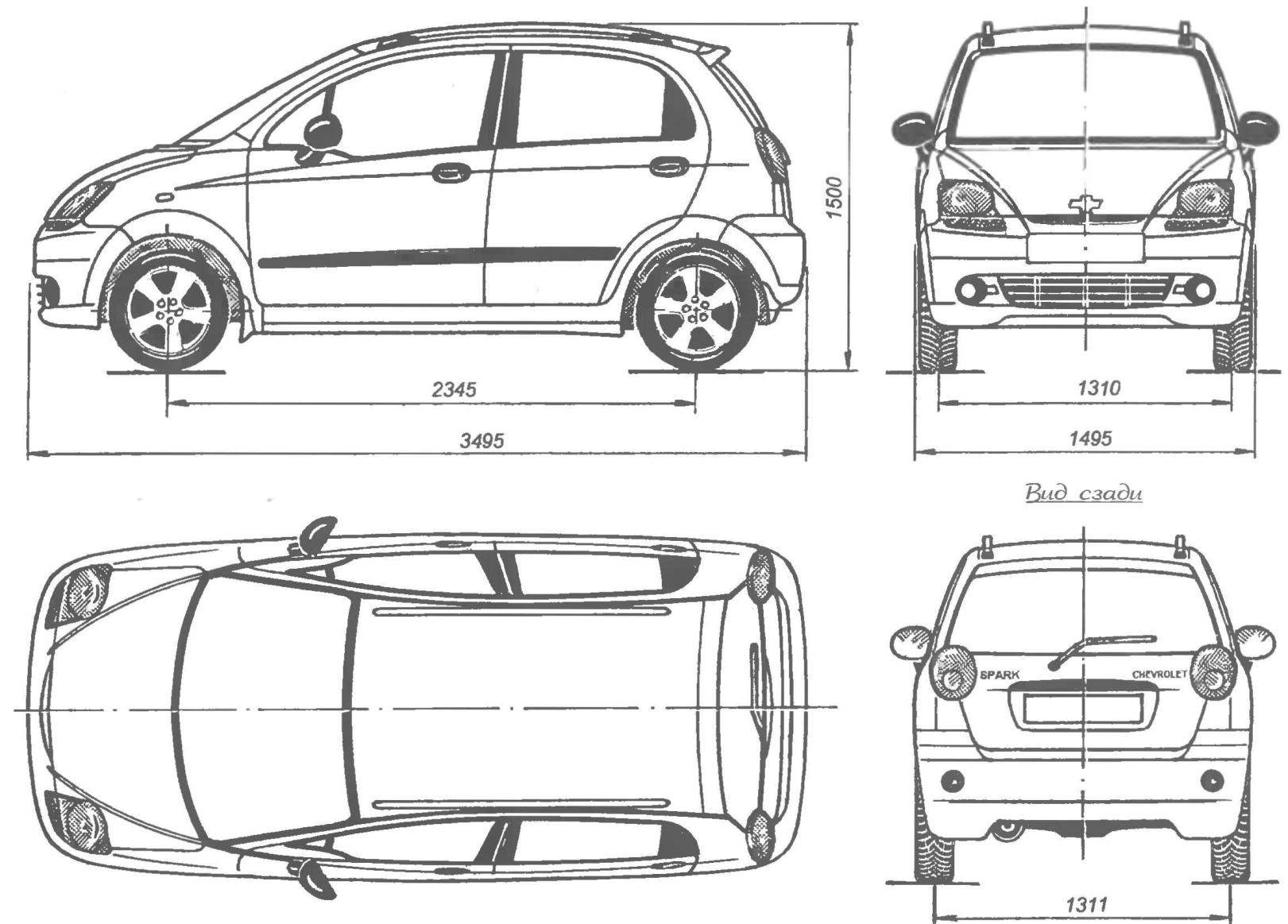 Geometric diagram of the CHEVROLET SPARK
In 2005, the Assembly line of GM Daewoo came off the car under the name CHEVROLET SPARK, which is a further development of MATIZ cars. Should
notice that the name CHEVROLET SPARK, the car will only be shipped to Russia, where UzDaewoo-Auto will continue to supply small cars of the previous generation. In the rest of the country it will be sold as the CHEVROLET MATIZ.
New Daewoo Spark instead of round lights appeared complex, compound block-lights, and oval taillights replaced the round. To all — the car is enough roomy trunk (0,17 m3) and with the rear seats folded the volume is already 0,845 m3! By the way, to fold all of the rear seat and its parts — the back of the couch is cut in the ratio 2:3.
The new car’s dimensions have remained virtually the same as its predecessor, only the height has increased by two centimeters. However, the drag coefficient decreased from 0,399 to 0.34, and the interior provides a quite satisfactory location of both driver and passengers; such crews say the inside more than the outside. Theoretically, Spark is considered a quintuple (it is possible, in particular, to judge by the three headrests on the back of the sofa), but with enough comfort at the rear can accommodate only two passengers.
Saved resemblance with its predecessor, but the interior of the CHEVROLET SPARK is made completely different. Ergonomics of the driver can be driving the man almost any body type. And this despite the unregulated new three-spoke steering wheel (for reviews testers, for this car it is not so important). Dashboard designers were placed in the center of the front panel; and the front of the driver, behind the wheel — only scoreboard sovetovali indicators as for the appliances, then the buyer will be able to select an instance of the new car with a green, blue or orange scales. 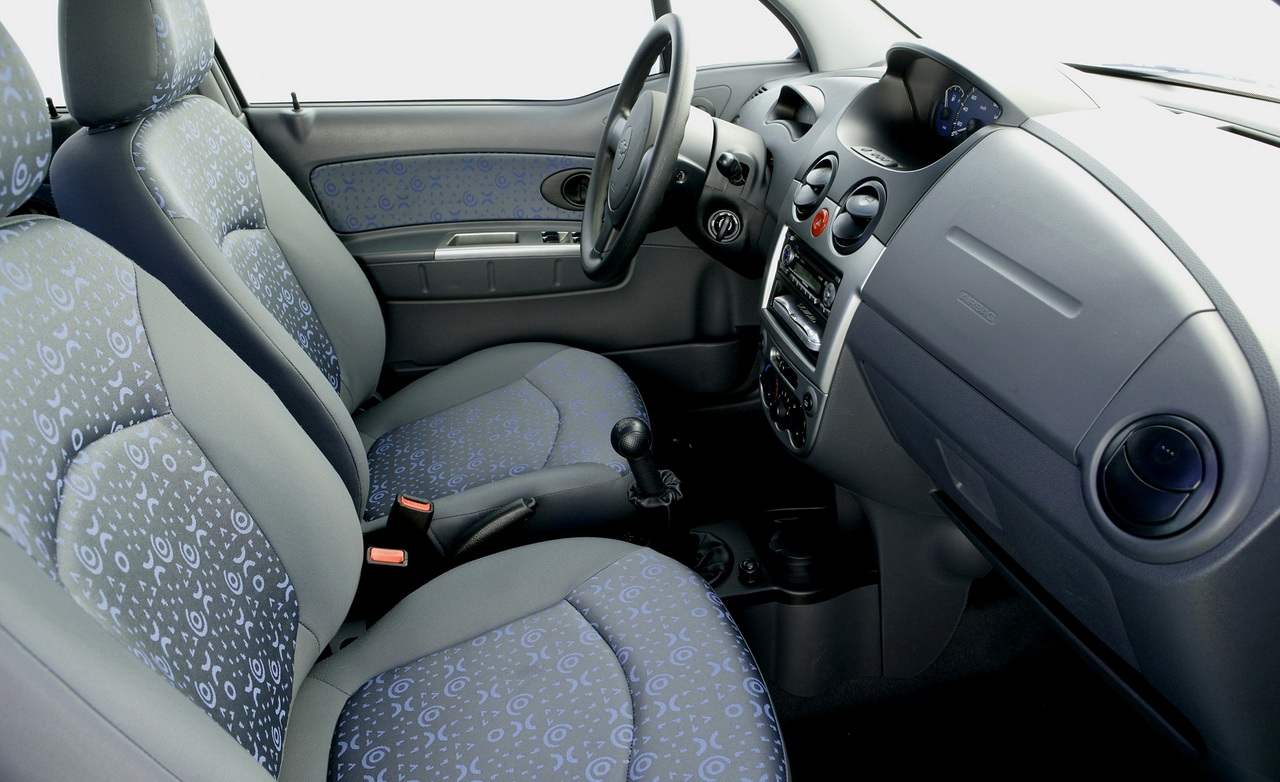 The front of the cabin of the subcompact SPARK 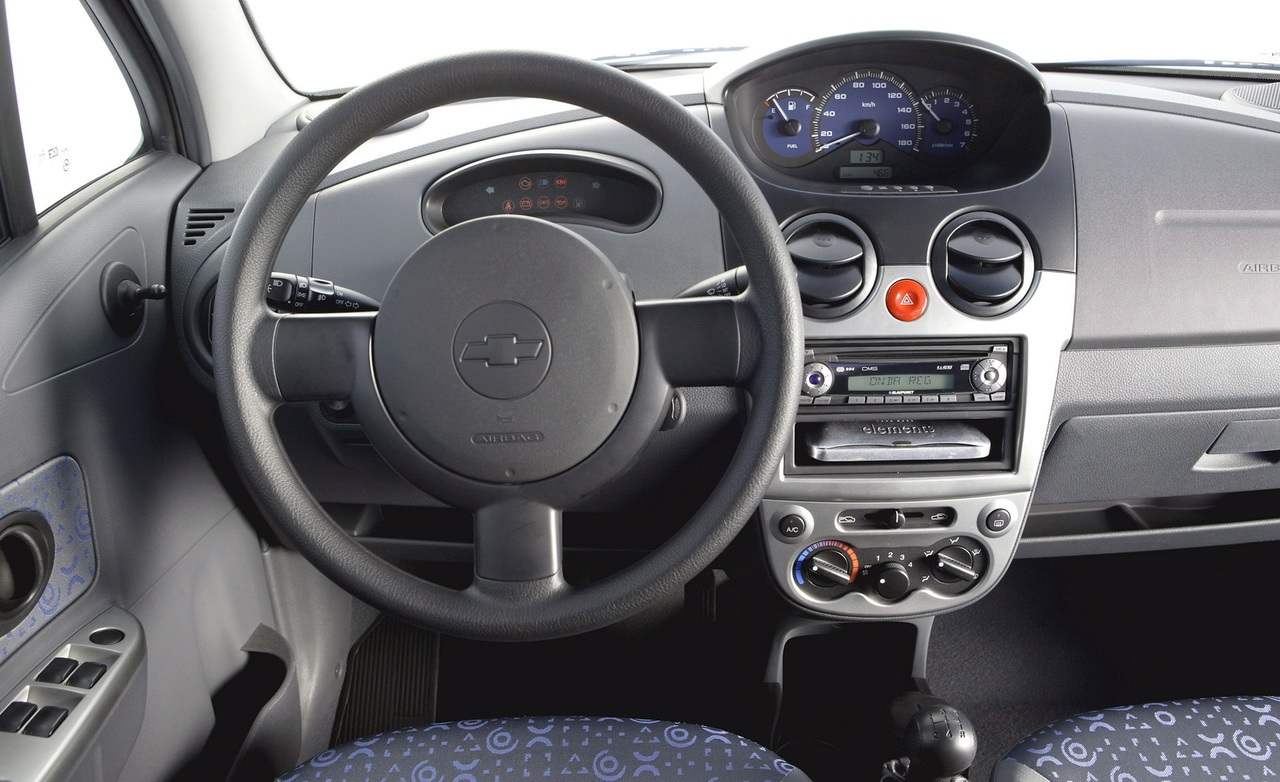 The instrument unit is located on the center console 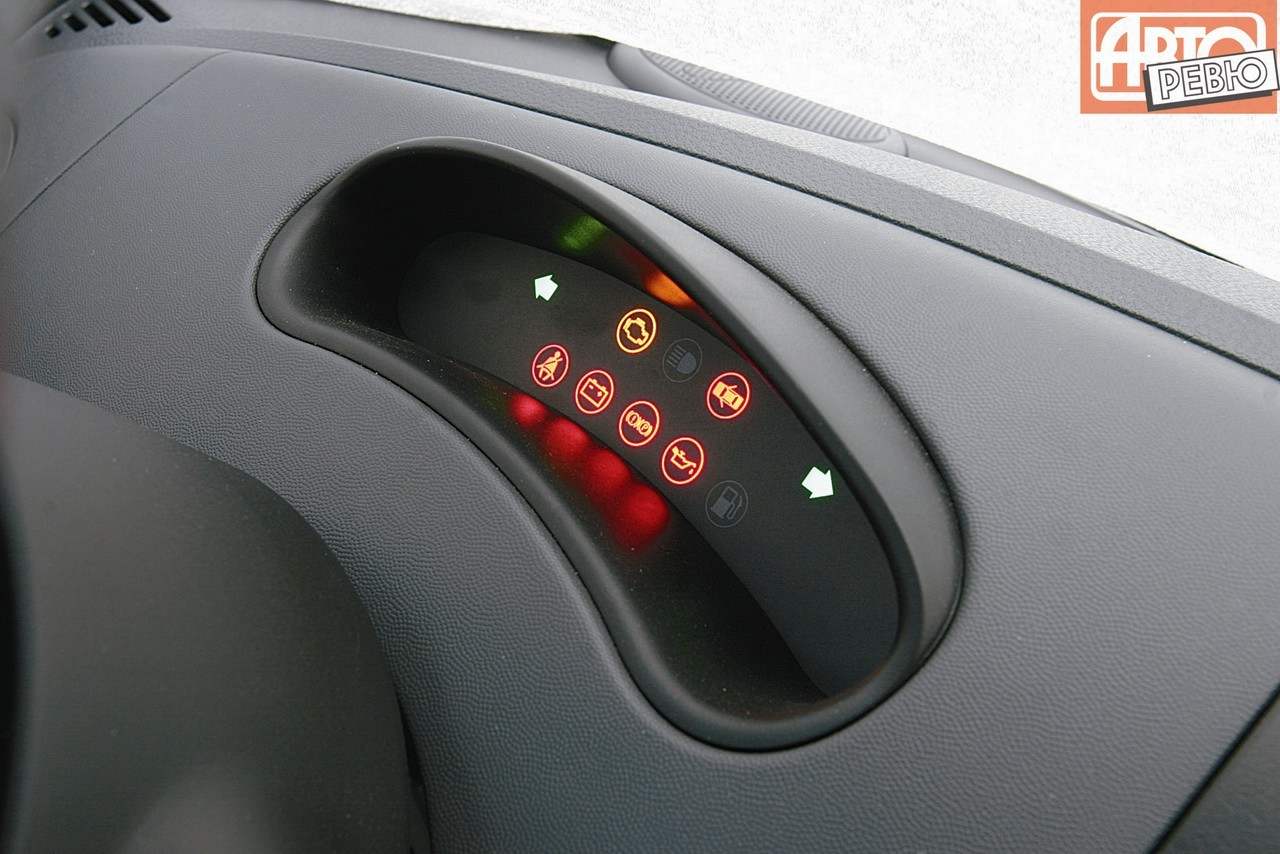 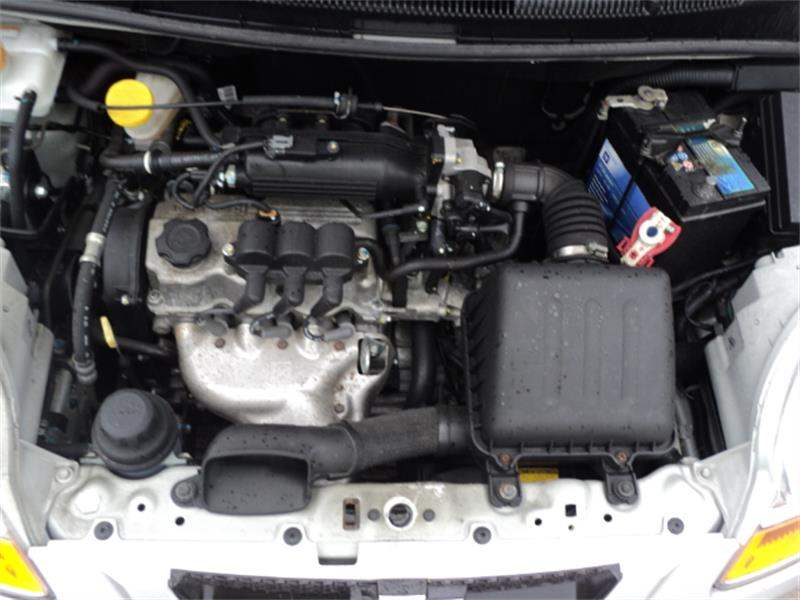 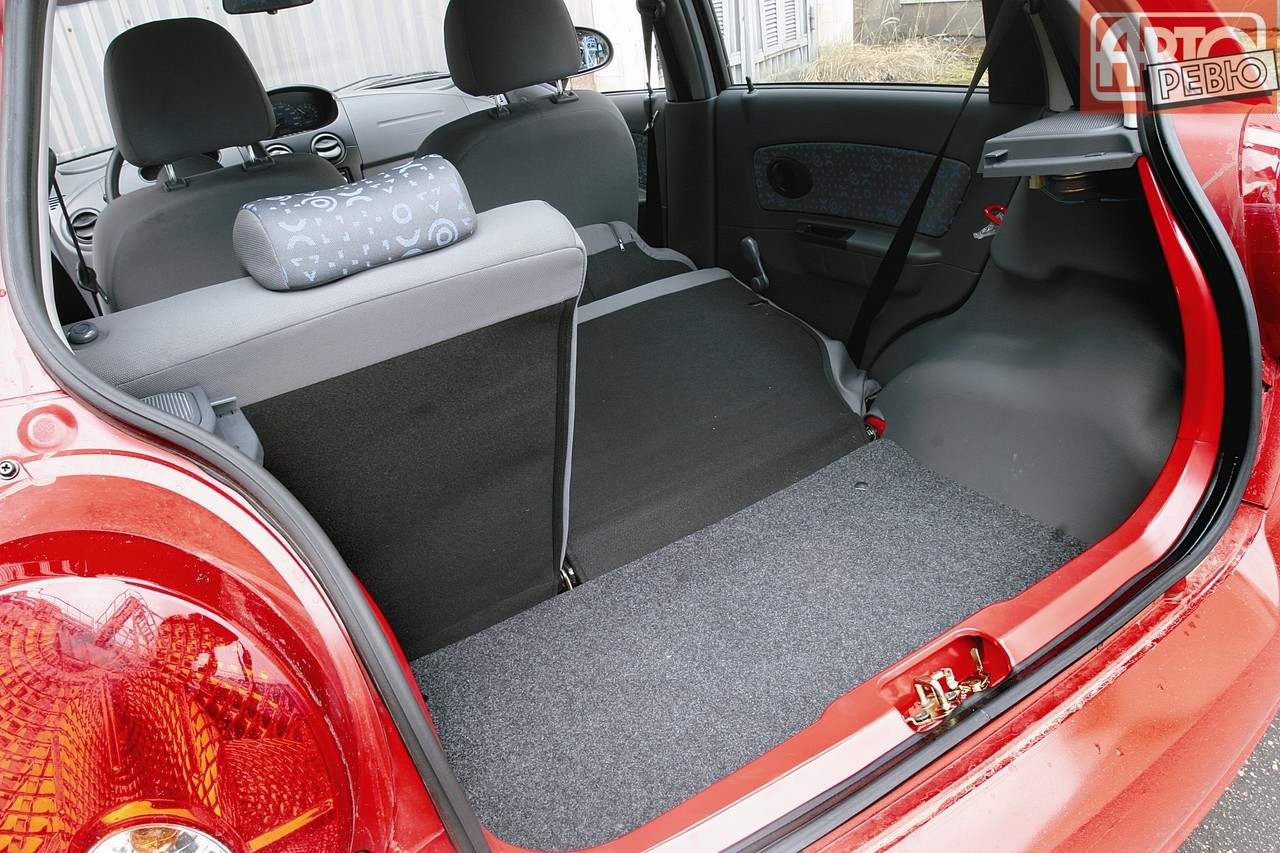 The trunk 170-litre variant
Mindful of the fact that the majority of cars of small is purchased by women, the designers have placed inside the a lot of boxes, pockets, niches and other “Samorodok” in which you can place a lot useful in the way of things — from a pair of sunglasses (the case for them is on the ceiling) to the road atlases and maps (they can be easily placed on the two shelves under the front panel). Women enthusiasts and a mirror built into the back of the driver’s sun visor.
The designers of the machine we paid special attention to passive safety of the vehicle, and the prototype was quite high (according to the international classification four “stars”), while his successor, CHEVROLET SPARK, it has further increased: the proportion of elements of reinforced steel in the vehicle frame (by weight) increased from 37 to 51 percent, and the floor and mount it to the b-pillar is significantly enhanced for best of the confrontation of the body lateral impact. In addition, in the zones of maximum deformation are used in honeycomb design. And yet, the CHEVROLET SPARK was the first in its class car,the front part of which is made in accordance with the European standard for pedestrian safety.
In the basic version the compact machine is equipped with a driver airbag, seat belts with pre-tensioners and pads to protect the knees. In the maximum configuration in the vehicle are also airbag for passenger front and side airbags. The car has a collapsible steering column and three-point seatbelts with pre-tensioners. Rollover of the vehicle the possibility of a fire is minimal — the fuel tank has an emergency fuel-valve-switch. Brake system is equipped with a very effective ABS, which provides more than a reliable stop of the vehicle.
The new machine will also be equipped with 3 – and 4-cylinder engines, which have undergone a major upgrade. Both now comply with Euro 4 standards, which they had upgraded intake and exhaust system, and gas distribution mechanism instead of a steel rocker arm is an aluminum, with roller tappets. All these improvements allowed to reduce losses in the valve mechanism 15 percent. To all modified motors are less noisy than their predecessors; the silence in the cabin has also contributed to changing the engine mounts — instead of four legs he now three.
Technical characteristics of the car CHEVROLET SPARK

Significantly improved (compared to the DAEWOO MATIZ) suspension subcompact. Its energy intensity was slightly higher, and the front suspension is now more rigid in the transverse direction. Also changed the rear suspension semi — trailing arms of the former were replaced by more rigid in the transverse direction oblique levers. And gas-filled shock absorbers made by oblique, slightly improved their damping characteristics.
Test CHEVROLET SPARK revealed that the new car is more economical, more dynamic and safer than DAEWOO MATIZ. Unfortunately, it is unclear what the cost of these improvements. Korean and Korean-Uzbek small car of the previous generation is not without reason known for its lowest price among all cars, about $ 7,000.
Claim that SPARK will also remain the cheapest cars, so you should wish Korean brands a good competition with UzDaewoo on the Russian market.
I. EVSTRATOV