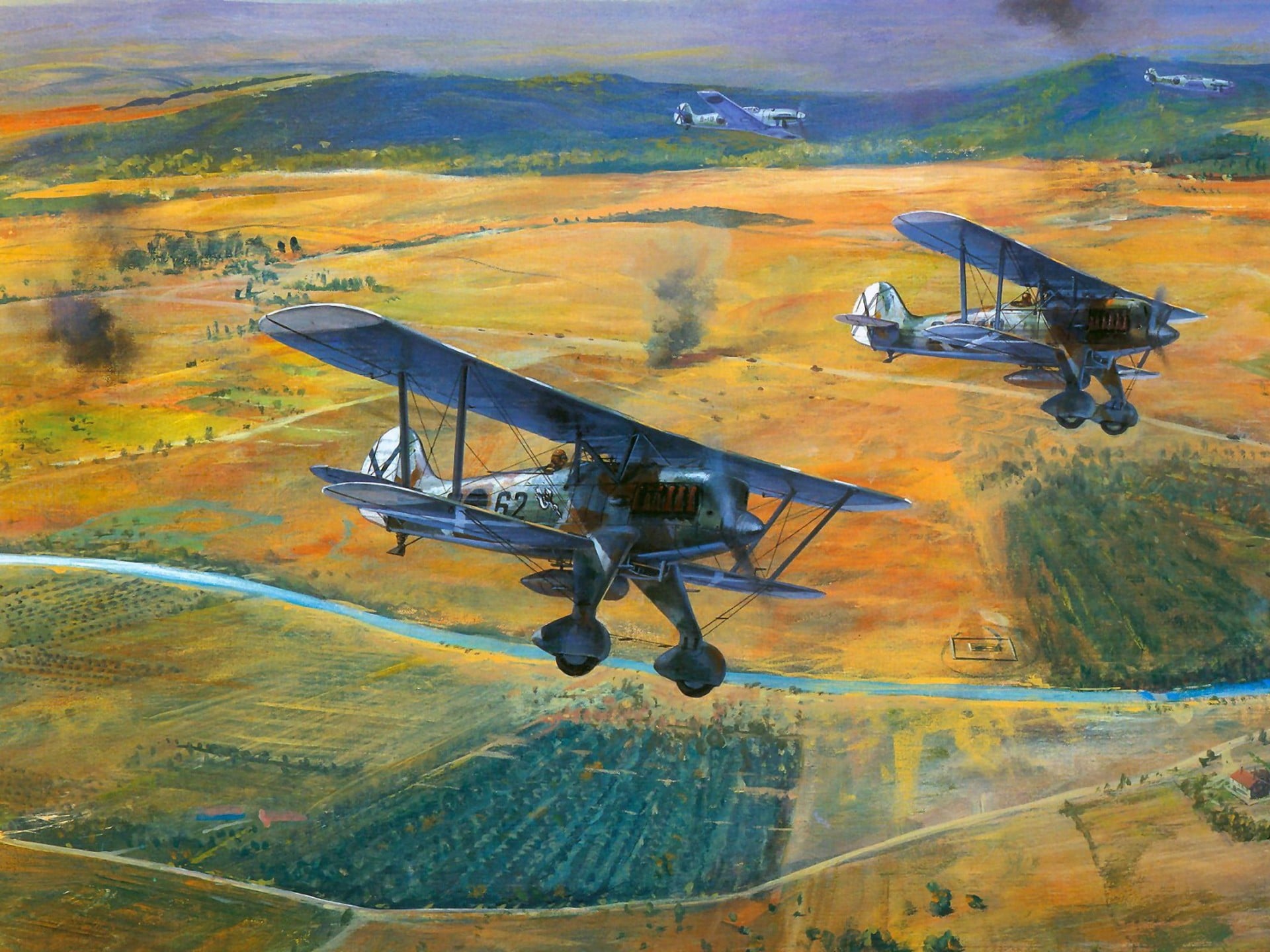 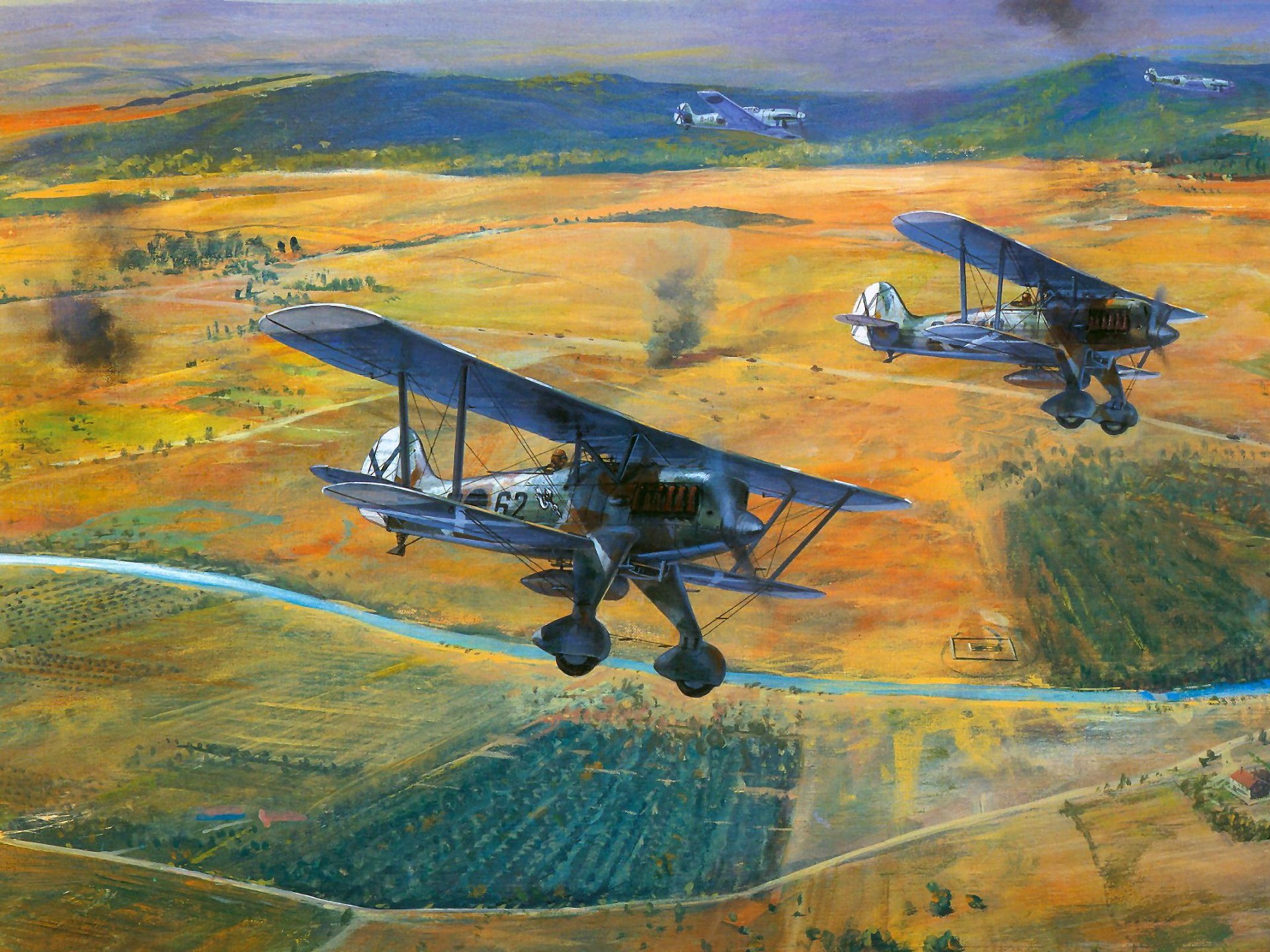 Fighter biplane HEINKEL Not-51. The military rebellion against the government of the Spanish Republic began on 17 July 1936, when the radio sounded the prearranged signal: “Above all Spain the cloudless sky…” Almost immediately, the rebels have begun to receive military aid from Germany, Italy and Portugal. In particular, 31 July 1936 from Hamburg to the Spanish port of Cadiz came steamer “Usaramo”. On Board were six fighters Not-51V-1 with the appropriate number of pilots and a group of 79 soldiers.

A week later, the ship arrived at the port of destination. The aircraft quickly gathered and circled. When landing on the airfield two Not-51 was damaged. Another Not-51 was lost in their first combat sorties, but its pilot City of Trautloft managed to jump out with a parachute and he survived.
During the week German pilots prepare for flight on non-51 a group of Spanish pilots, and already 18 August they made the first combat sorties on the new fighters. On this day, captain G. Morato and Lieutenant D. Salvador was hit by four Republican aircraft Breguet XIX, Potez 54 and two Nieuport 52.
Meanwhile, delivery of the aircraft is Not-51-1 for the Spanish rebels continued. During September they were able to supply two full squadrons of the 1st-2 and 2-E-2 of the second aviation group (Grupo 2). Units were based, respectively, in Zaragoza and Leon. In November they were joined by 38 fighters do Not-51-1 of squadron Lagdgruppe 88 of the Legion Kondor.
To Nov pilots-51 felt complete masters of the sky of Spain. The situation changed after the appearance of the front of Soviet fighters I-15. “Heinkels” began to bear huge losses, because inferior to the Soviet fighters not only in speed and maneuverability, but also in weapons: And-15 had four machine guns versus two Not-51 and three times more ammo.
On the proposal of the chief of staff of the Legion “Condor” Colonel von Richthofen Not-51 were used for attacks on ground targets, for which the aircraft was modified by installing holders for the six desyatiballnoy bombs. Similar tasks were to perform and the fighters are Not-51 from the second group. Follow the leader, they in turn swooped down on goal, dropping the bombs and firing its machine guns. This tactic, called Cazas de cadena, which literally translates as “chain fighter”. The first such tactic was to use group 1-G-2, formed in Sierra Leone in November 1937 of the twelve fighters do Not-51-1. All in all, Spain was delivered of 79 aircraft modifications.
After arriving in Spain new fighter-monoplanes Messerschmitt Bf-109B them armed with the 2nd squadron of Jagdgruppe 88. The first and third squadrons continued to fly on non-51 during the onset of the Republicans under the Brunet, storming the advancing troops at via del Prado. They receive orders from staff officers that are at the forefront of the rebels, or do free hunting. Then the planes of the first squadron was transferred to the North, where they participated in the battle for Santander. The longest Not-51 remained in the third squadron of the 88-th group. In July they were replaced by Bf-109С. Of the remaining cars formed a new, fourth squadron.
During the battle of the Ebro air group Franco 1-G-2 suffered heavy losses and in July 1938, having in its composition only three serviceable vehicles, was withdrawn from the front. In its place arrived a group of 4-G-2 of the 28 fighters do Not-51-1, provoevavshy until the end of hostilities in Spain. Group 1-G-2 after the replenishment technique (eleven planes do Not-51-1) and staff received a new designation 2-G-2 and returned to the front. 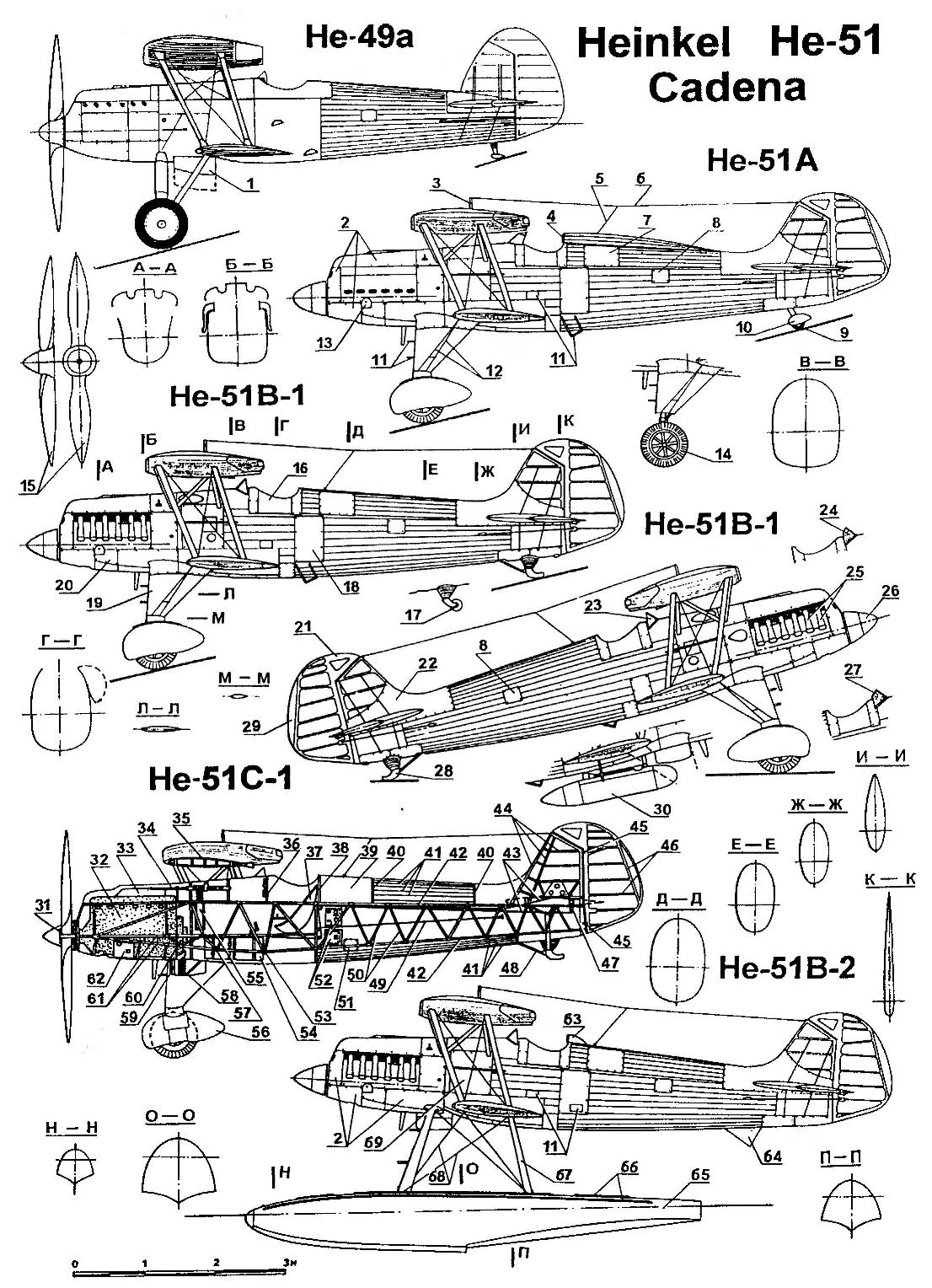 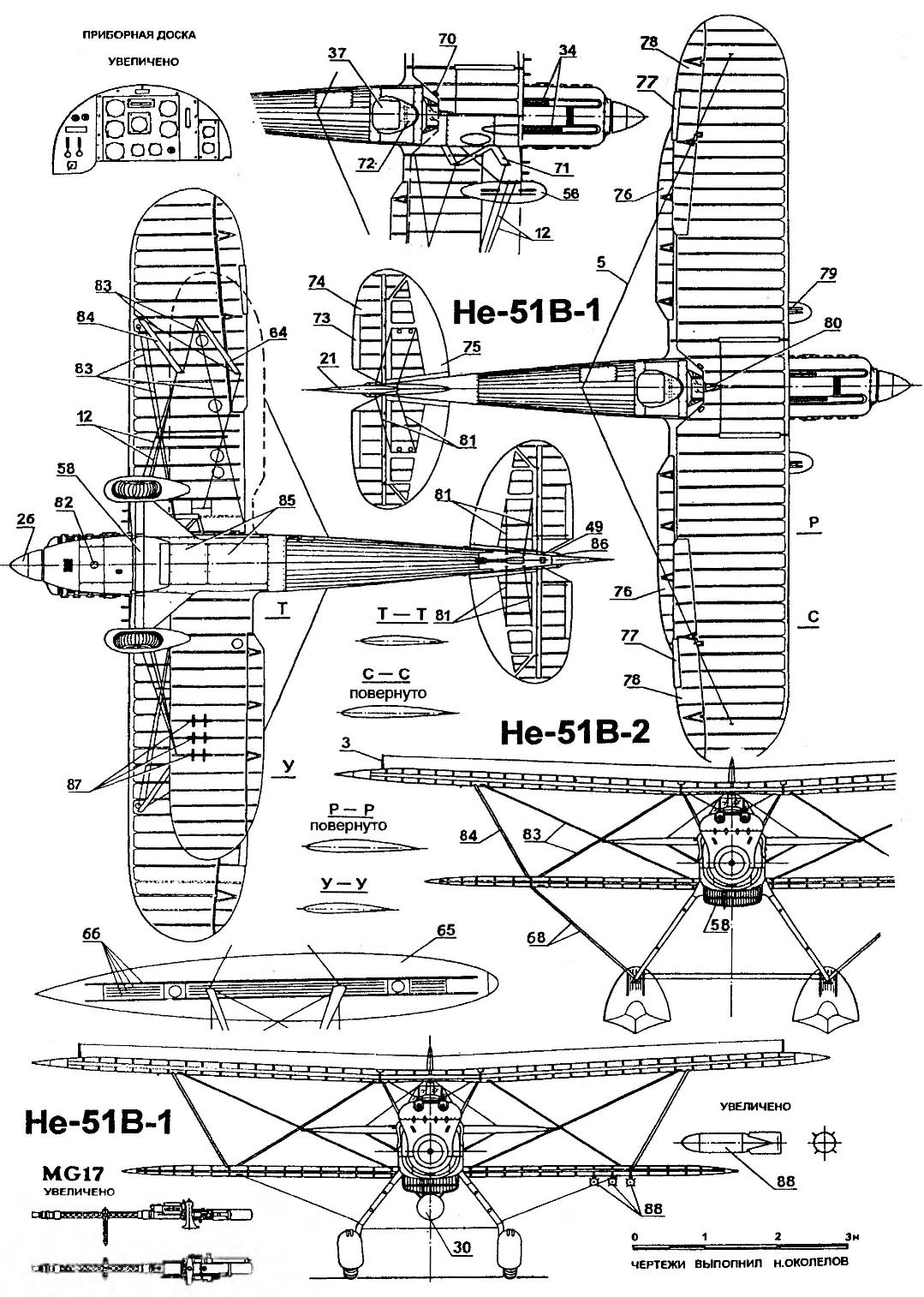 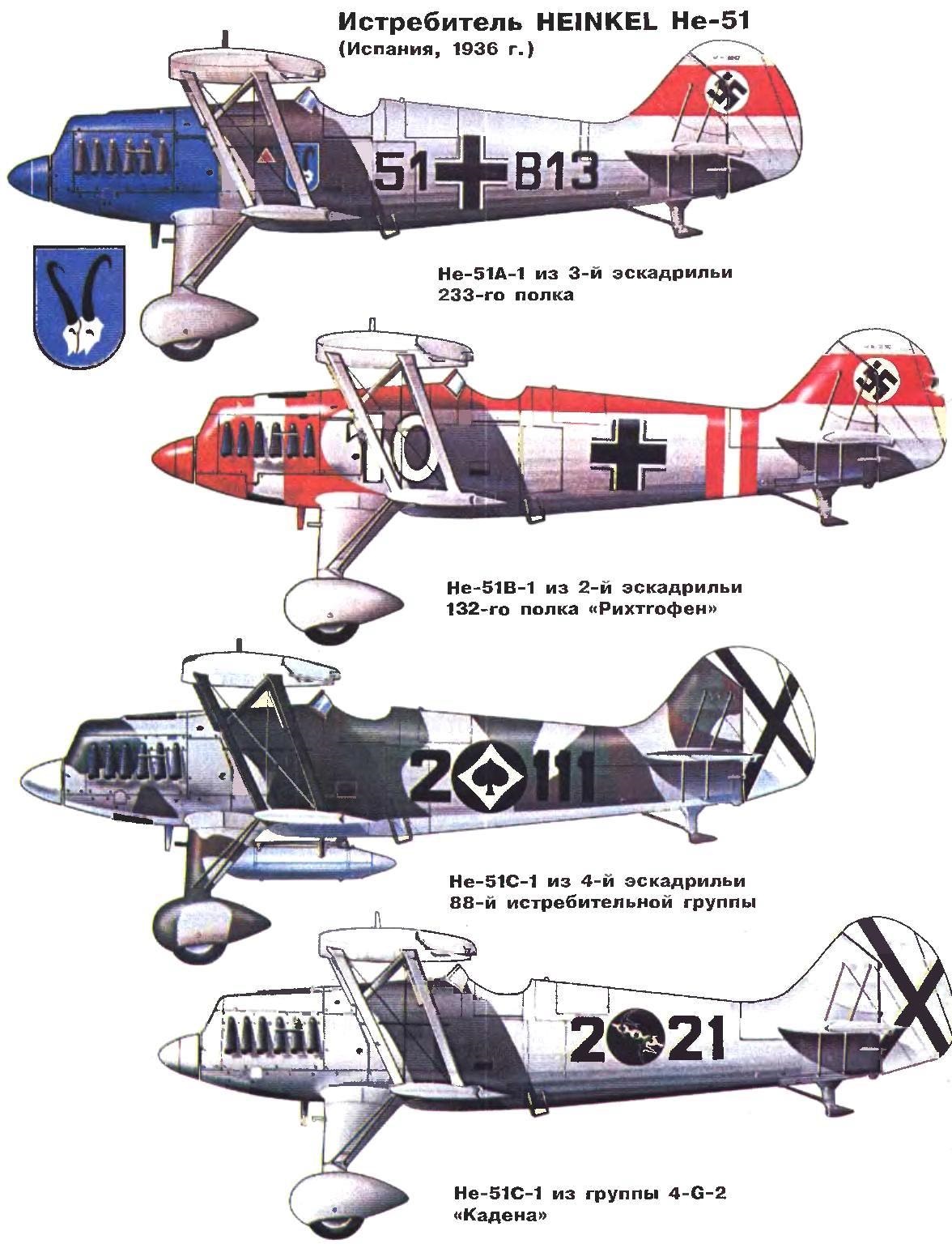 In January 1936, Udet E., appointed chief inspector of the Luftwaffe, conducted comparative tests of the Ar-68 and Ne-51, which the firm Heinkel lost. As a result, the company Arado fighters were gradually replaced in combat units do Not-51. The latter was transferred to a fighter training unit (Jagdflieger-schulen), where they were used during the Second world war.
In addition to these modifications A and b, serially produced planes do Not-51 S. Modification of s-1 was built on the factories of the company Fisler specifically for the war in Spain. It differed from 51 In inscriptions in Spanish in the cab and six bomb racks for 10-kg bombs. Frankists was sent to 79 aircraft Non-51S-1, of which 28 were flying as part of the Legion “Condor”. In the summer of 1937 was released 21 unit float is Not-51-2 radios for replacement-51 To 136 in the first group of German naval aviation.
The outcome of the civil war in Spain showed that in the second half of the 30-ies Not a fighter-51 is completely outdated. Adopted in April 1937, a programme for the development of the Luftwaffe was to have twelve fighter groups, Not the armed-51, seven more planned to arm the Ar-68. In the course of the war in Spain, the program has been completely revised with the aim of upgrading parts of fighter-monoplanes. In 1938, remaining in combat units do Not-51 was transferred to the created on August 1, the division air support, which consisted of Ar-66 and Not 46. Soon, however, these units were disbanded and Not-51 became a training machine.
For all the time mass production was built 722 of the aircraft-51 various modifications.
Several of Franco’s fighters do Not-51 was captured by Republicans, and one of them supplied by sea in the USSR. The tests took place in NII VVS. As noted Soviet test pilots, Not 51, in 1937, were already an outdated car and was lost for most of the characteristics of Soviet fighters. However, it was noted a number of advantages of the plane. It had excellent landing characteristics, stability in flight and ability to quickly pick up speed in a dive. Mechanics appreciated the excellent performance of the machine engine of which was recapturable in just three minutes, and high structural strength. Particularly noted the presence of the aircraft receiving and transmitting radio stations.
Flight characteristics of the aircraft-51-1
Wing span, m…………………………………11,0
Length, m…………………………………………….8,4
Height, m…………………………………………..3,2
Wing area, m2…………………………….27,2
Empty weight, kg……………………………….1472
Take-off weight, kg:
normal …………………………………….1900
maximum…………………………………..2011
Maximum speed, km/h…………….330
Practical ceiling, m……………………7700
The rate of climb, m/s……………………..11,9
The maximum flight range, km….570
Engine…………………………………………BMW VI 7.3 Z
Engine power, HP…………………..750
N. Food reserve was, A. CHECHIN, Kharkov