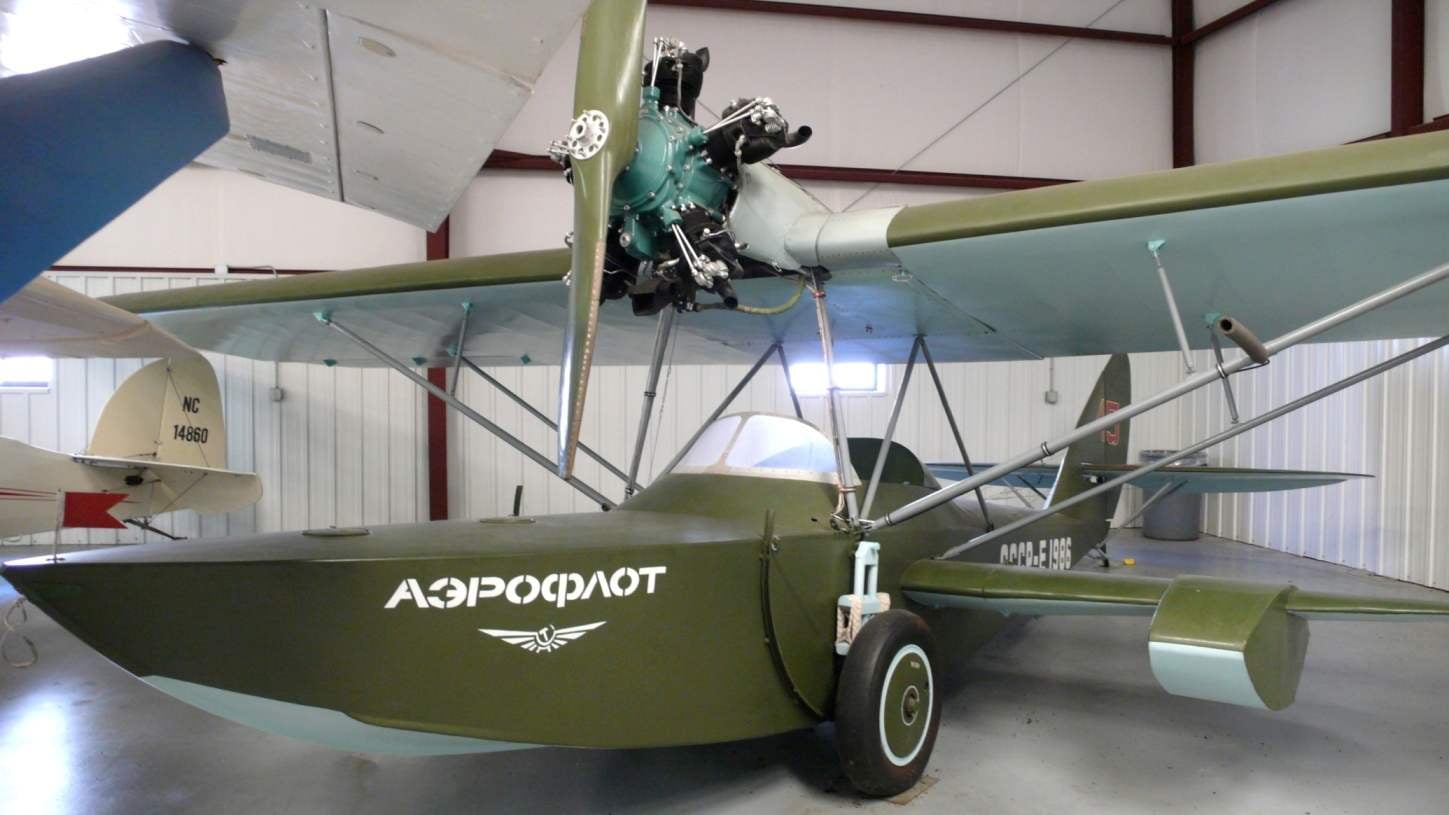 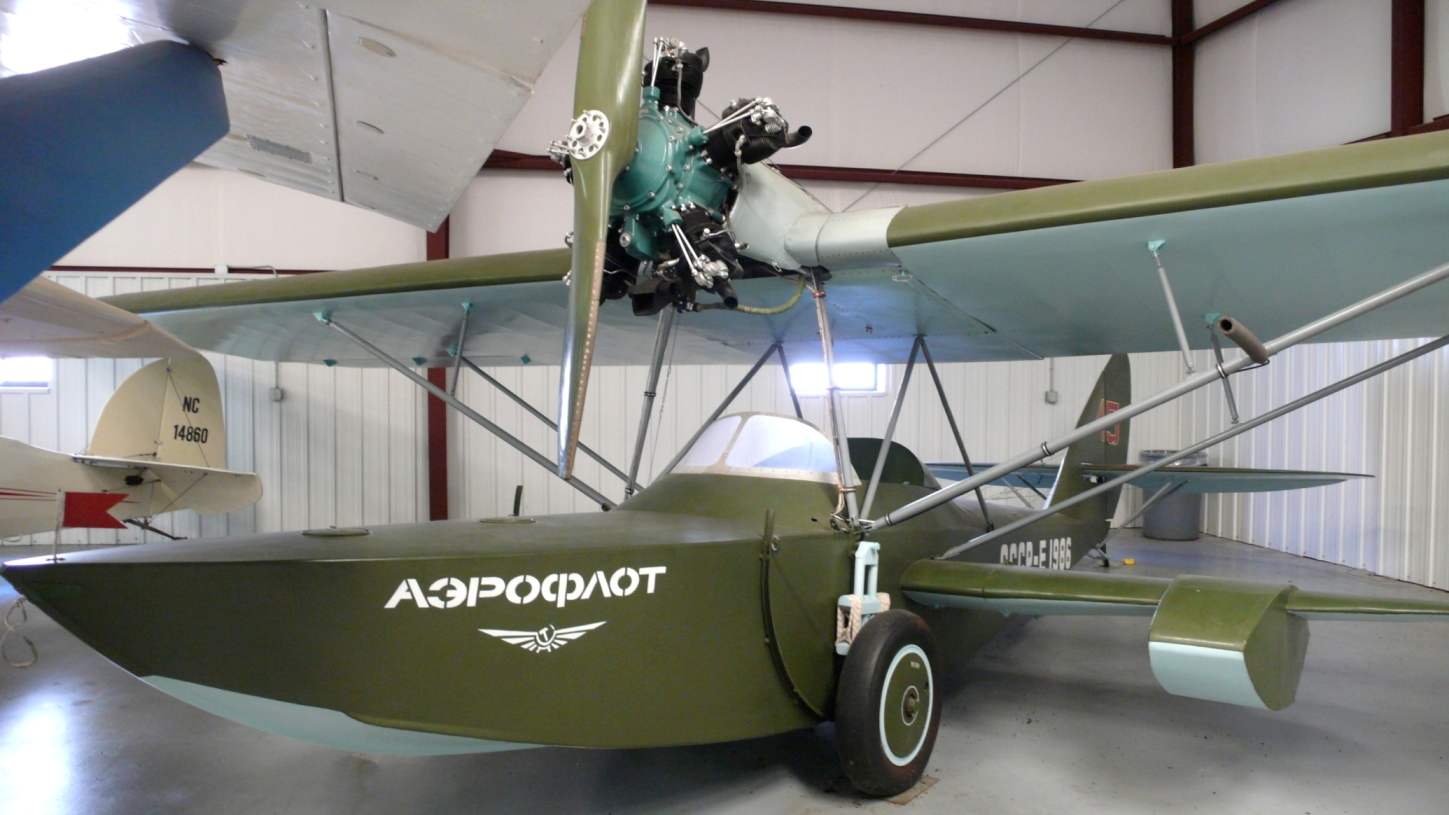 In the summer of 1929 went up in the air the first Soviet amphibian. It was a W-1 with a 65 HP motor, built by aviation enthusiasts — thirty-year-old engineer Vadim Borisovich Shavrov and his friends in one of city apartments. Flight tests were successful. After a year on the instructions of the chief of the Air Force created a second, somewhat increased in size, the copy machine under the series motor M-11 rated at 100 HP and this Is the origin known in aviation circles around the world plane W-2.
Good flight and operational data flying amphibians, manufacturability from abundant materials opened up a broad road. “Lavrushka” with honor and glory served the national economy more than three decades.
In the 30-ies of amphibians were used to study the coast of the Arctic ocean. Nice polar pilots (grandma, Koshelev and others), flying W-2, filled a lot of “white spots” on the map far North of our country. Plane with folded wings was always a place on Board the icebreaker that went to the high latitudes of the North pole. Amphibian is widely used on local routes in areas where many rivers and lakes.
Over time, the individual parts and assemblies have changed. They were introduced in the design of the chassis, struts and the wing struts, fuel and oil tanks, engine hood. Outdated equipment was replaced new. 1951 W-2 produced with a single control and starting system of the motor with compressed air. For the convenience of the pilot and passengers in the cabin installed a glazed lantern. The elevators were supplemented by guided trimmers.
The scheme of the plane — flying boat, polutoraplan with high pull-rotor on the center section of the top tray of the wing. The lower cantilever wing with floats lateral stability. The tail Assembly has a tray-stabilizer.
The chassis consists of two rising struts, which were installed wheels or skis.
The plane was used in two variants: passenger and freight — transporting two passengers, mail or cargo; and sanitary to transport a patient on a stretcher and accompanying medical worker.
When designing amphibious designer tried to make the plane versatile. He managed to achieve this. So, depending on the task or situation in flight, W-2, taking off from the water can land on the airfield or take off from land and landing on the water surface and then on their wheels “exit” on the sloping Bank.
The wing — thick profile with a large lift coefficient. For use when planting all its advantages it is set at a large angle to the boat. All this gave the opportunity to reduce landing speed, without increasing the area.
Last of built on the companies of Aeroflot planes sh-2 flew until 1964. In the Museum of the Arctic and Antarctic, Leningrad exhibited one of the first planes W-2 (with engine “Walter”), which flew ice reconnaissance in the Arctic pilot Babushkin.
Modelers often attracted by the beautiful shape of this original machine. Radio-controlled models-copies of possible discharge of cargo, and skydiver. At the discretion of the jury read out the takeoff and landing on water in an additional flight (as an arbitrary demonstration).
The fuselage of the plane the boat. Oka is a wooden rigid non-collapsible construction. The outer surface is sheathed with plywood and covered with fabric. 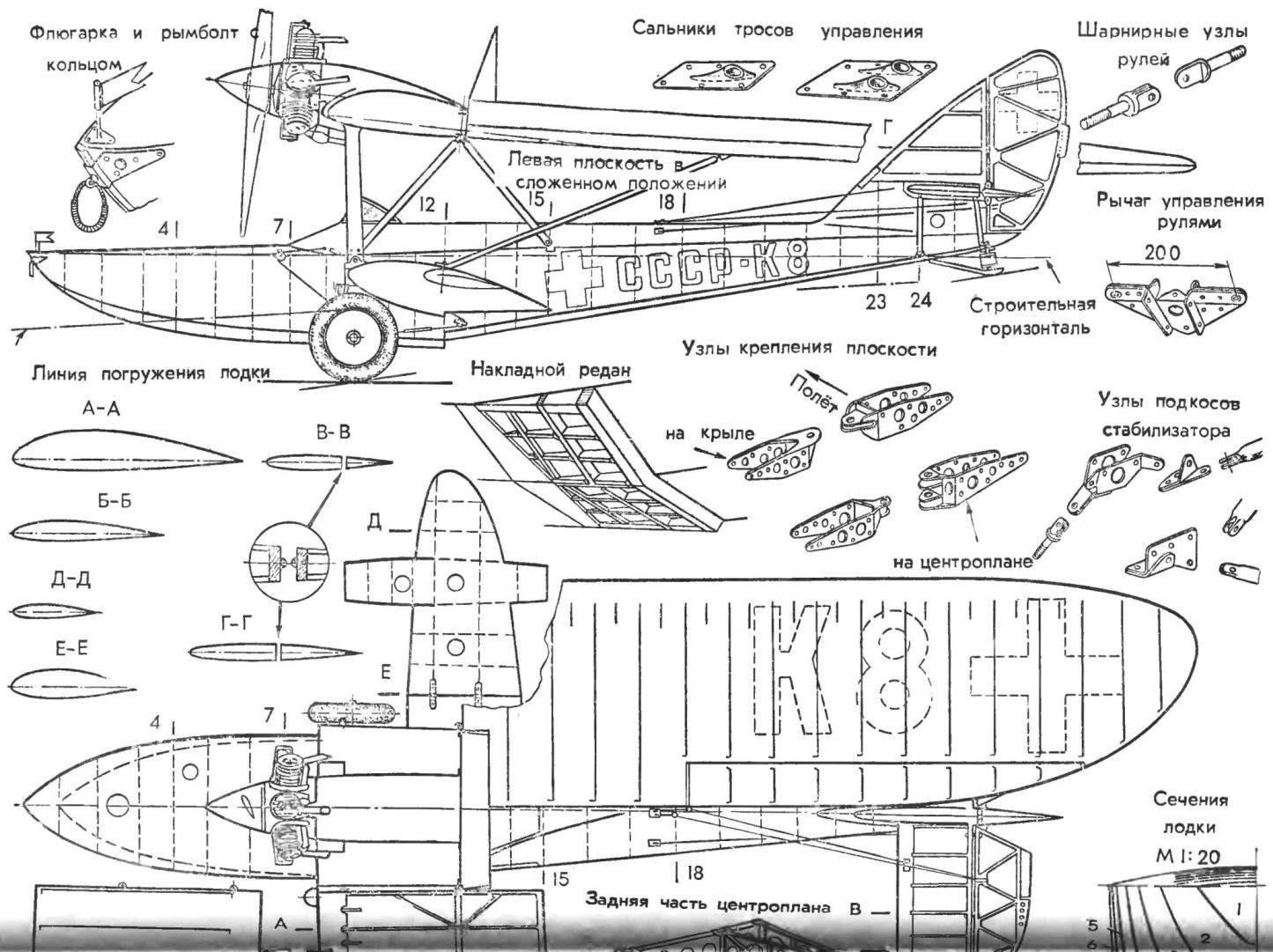 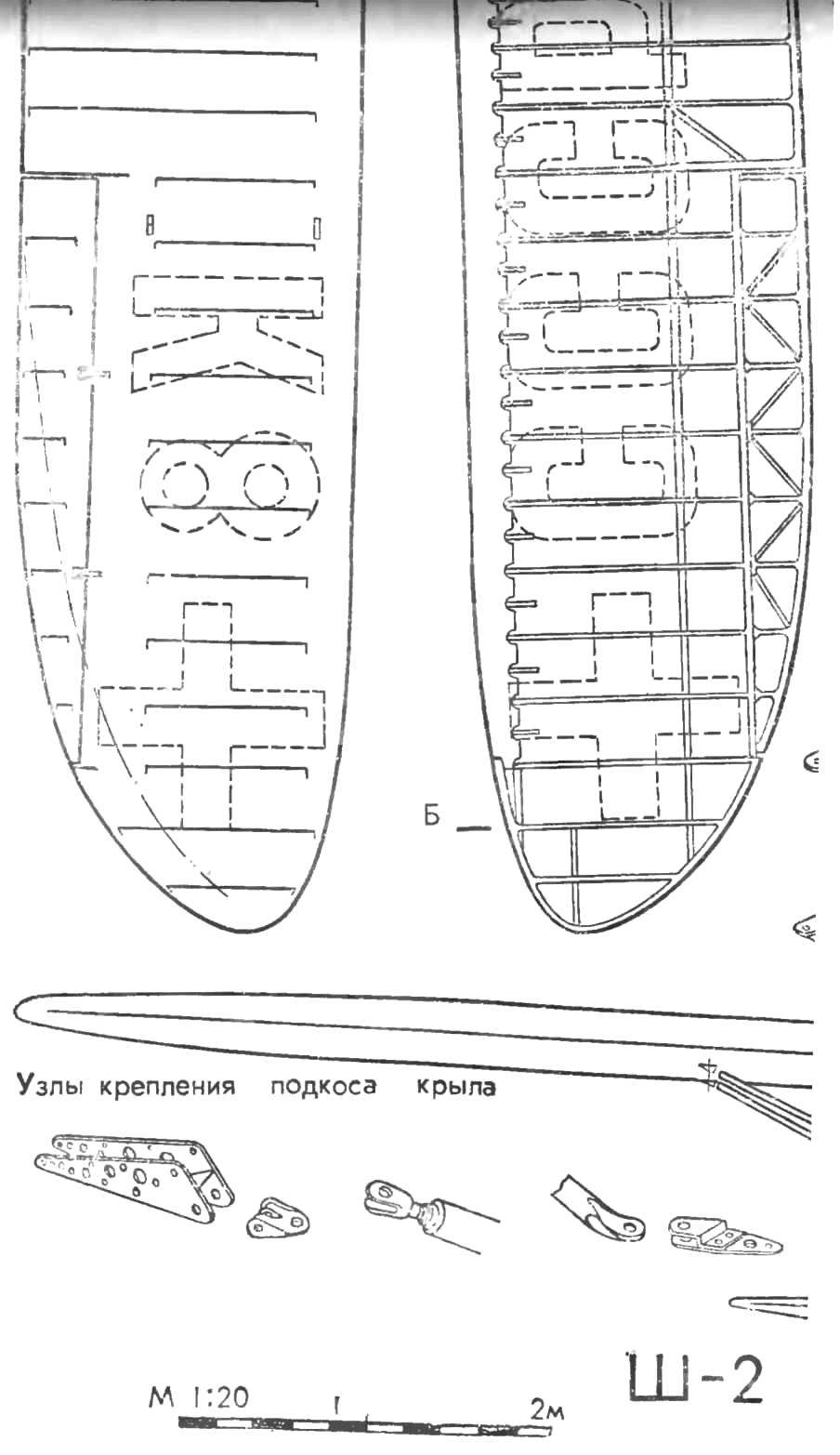 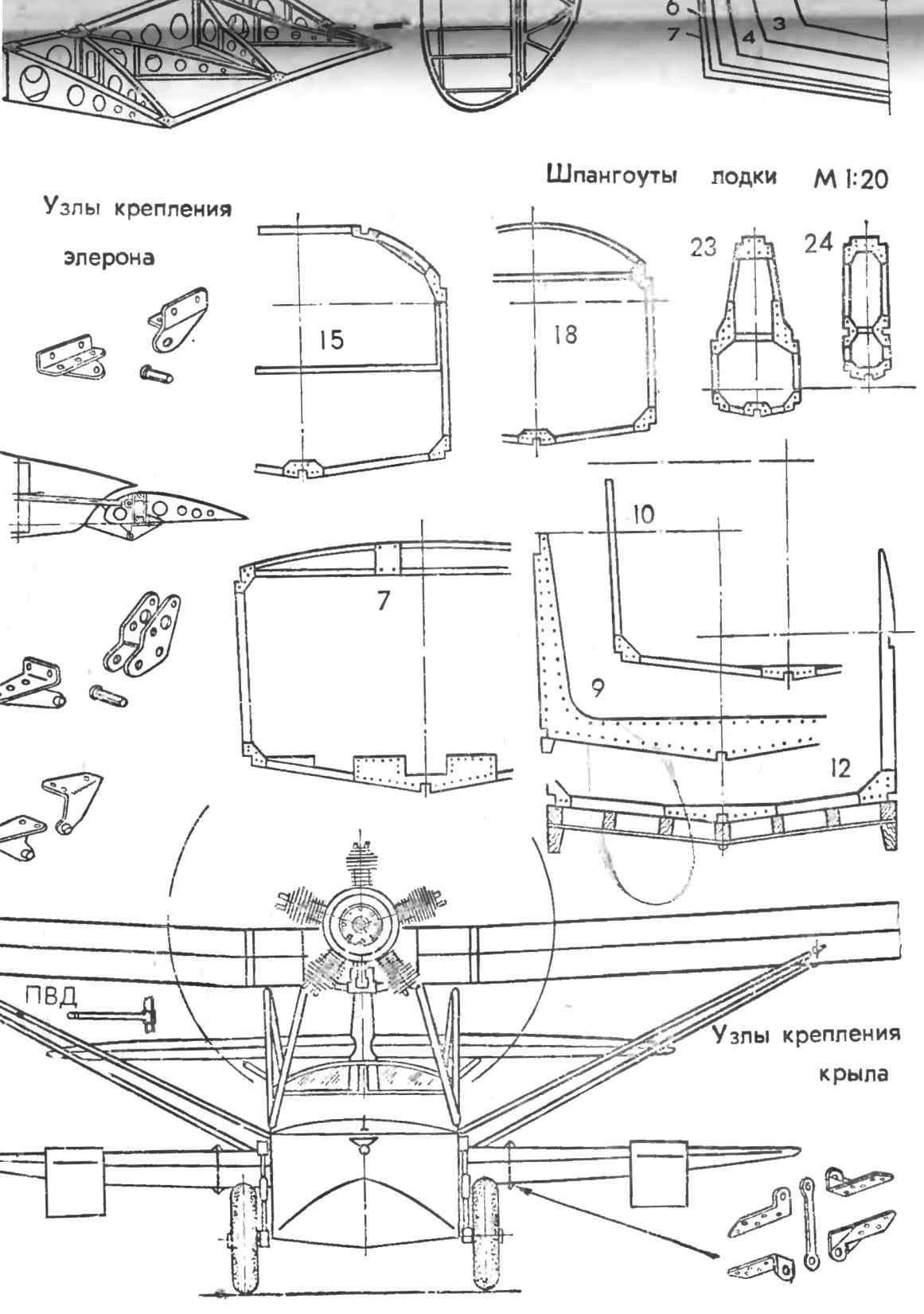 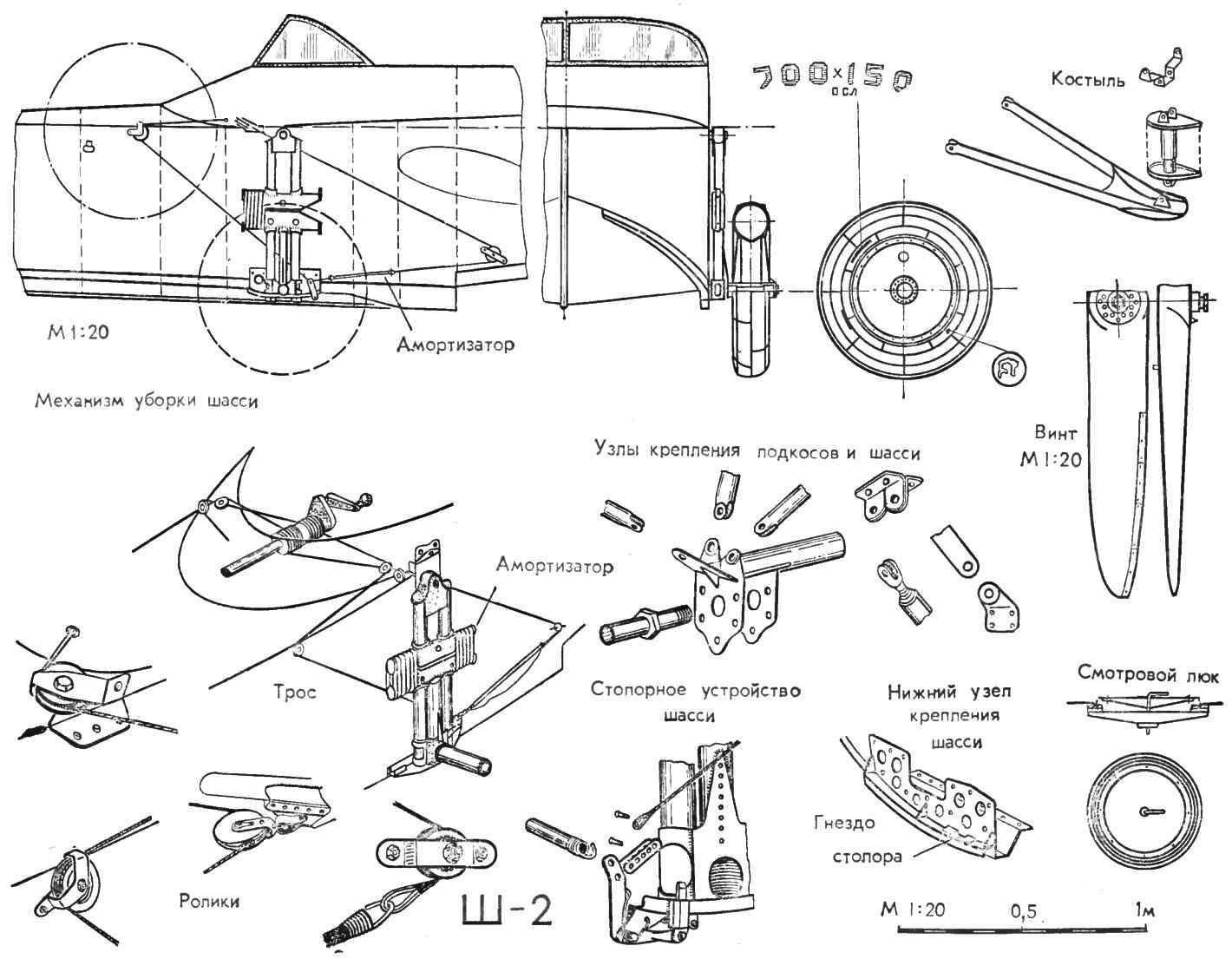 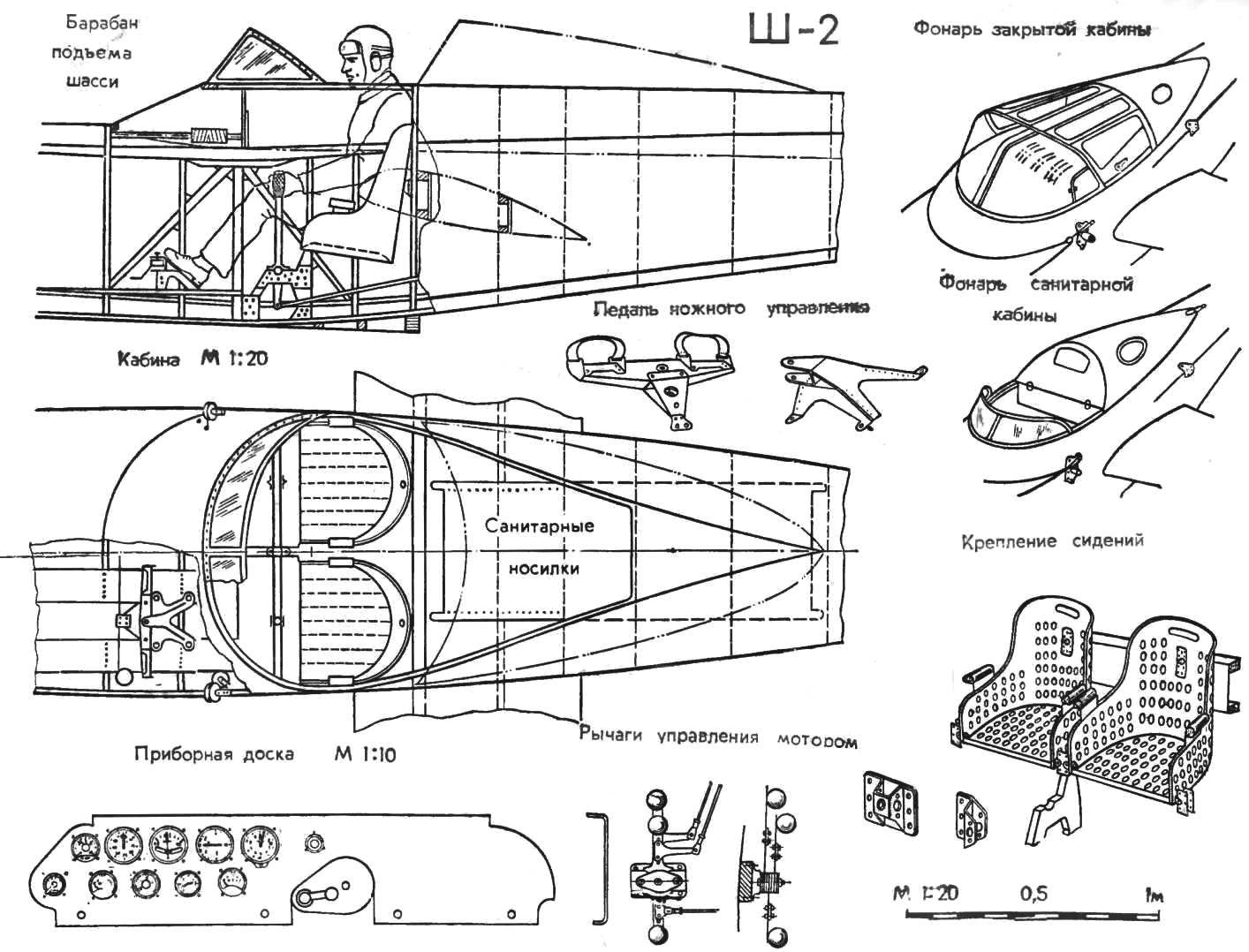 Deck plating, and the sides in the new part (to frame No. 3) — convex. Side, starting with the frame number 10, parallel. To the frames No. 5, 15, 18 and 22 attached plywood walls-bulkheads, which divide the boat into five compartments. This ensures that the aircraft is buoyant and unsinkable. In each of the compartments provided from the bottom drain plugs, and the top inspection hatches Ø130 mm (before frame No. 3 in the forward cargo compartment Ø210 mm).
The sternpost is trailing transverse element of the set of the boat — pine milled bar. He, along with frames no 23, 24 and 25 forms the base of the air keel.
In frame five stringers, the bottom is reinforced to the frame No. 12 outer keel beam from ash.
To reduce bryzgogasitelja on takeoff the boat has pine zygomatic slider, trapezoidal and variable along the length of the section. They go from bulkhead No. 2 to the redan.
Redan height of 60 mm provides the amphibians off the water on takeoff. It is attached outside the plywood sheathing on the bottom, in the interval between the frames No. 9 and 12.
In the bow of the boat — anchor with a loop of rope for towing or tying down aircraft afloat. It also installed a freely rotating cap.
To deck plating in front of the bulkhead No. 18 for passing control cables riveted seals of flared copper tubing, soldered to a steel plate.
The frame of the canopy made of duralumin, glass and plexiglass and is mounted on the outside of the sheathing with screws. General view of the lantern of sanitary and enclosed cabin given on the drawing (see pages 26, 27).
The Central part of the lower bearing plane, made in concert with the boat. The detachable section of the lower planes have floats lateral stability. They are sheathed with plywood and covered with canvas and attached to the boat on the four bolts. On the detachable part there are three manhole.
The upper wing consists of a center section and two planes. Outer sections of the wing is sheathed with plywood and covered with canvas, medium closed top and bottom metal shields. The rear portion of center section has a fabric covering and attaches Yes the hinges.
The plane of the wing covered with fabric. Toe to the front spar and the lower surface of the bottom in place of the cutout for the Aileron reinforced with plywood. For keeping the profile of the wing in the upper part of the installed intermediate socks. In the root of the wing chord ribs reduced from 1800 to 1750 mm. This size is stored in the center section.
The front part of the Aileron (to the spar) has plywood sheathing, and all of it swathed in cloth.
The profile of the wing biconvex, asymmetric. Its thickness prior to attaching the struts — 17% at the end of the plane is 12% and the relative thickness change by reducing the curvature of the upper contour. This brings the profile in the end part of it symmetric. Conditional reduced the chord to calculate the upper part of the profile is indicated on the drawing.
The plane of the folding plane, they rotate around the axis of the connector of the second side rail and bolts securing the rear strut of the wing. Before folding the wings back of the center section rises.
The covering of the tail — the canvas, the front edge of the stabilizer — plywood.

THE PROFILE OF THE UPPER WING

THE PROFILE OF THE STABILIZER
Chassis rising. Right and left racks differ only by the shape of the lower bracket (mirror image). Shock cord Ø13 mm and a length of about 3 m has eleven turns. Between the bearing surfaces of the upper and lower sliders padded sheet rubber to absorb bumps.
Landing gear in the lowered position by the stopper fixed on the bottom bracket. Lifting or lowering of both parts of the frame occurs simultaneously with the help of ropes and manual lift, located next to the instrument panel. With raised wheel amphibian can stand on land, relying on the keel.
The cockpit is located between the frames # 6 and 12. The upper rim of the cockpit glued bent pine slats. Between frames No. 7 and 10 are fixed lower polwood. They serve as a basis to which is attached covering the upper part of the cabin. Plywood pilot’s seat (left) and passenger (right) located nearby. Board painted with gray oil paint.
Sanitary cabin is located between the frames 12 and 18. It is separated from the pilot of a retractable wall, and the top closed easily removable glazed lid. For communication between the patient and accompanying health care provider made in the wall of the sliding window.
The dashboard is made of aluminum is attached to the pipe frame number 9 and a special pad at the upper rim of the cockpit. Color dashboard black, matte.
On the plane to install the engine M-11 different series. Used wooden air screw Ø2,35 m with a constant pitch of 1.67. The aircraft were issued with hoods of different types.
S. MALIK