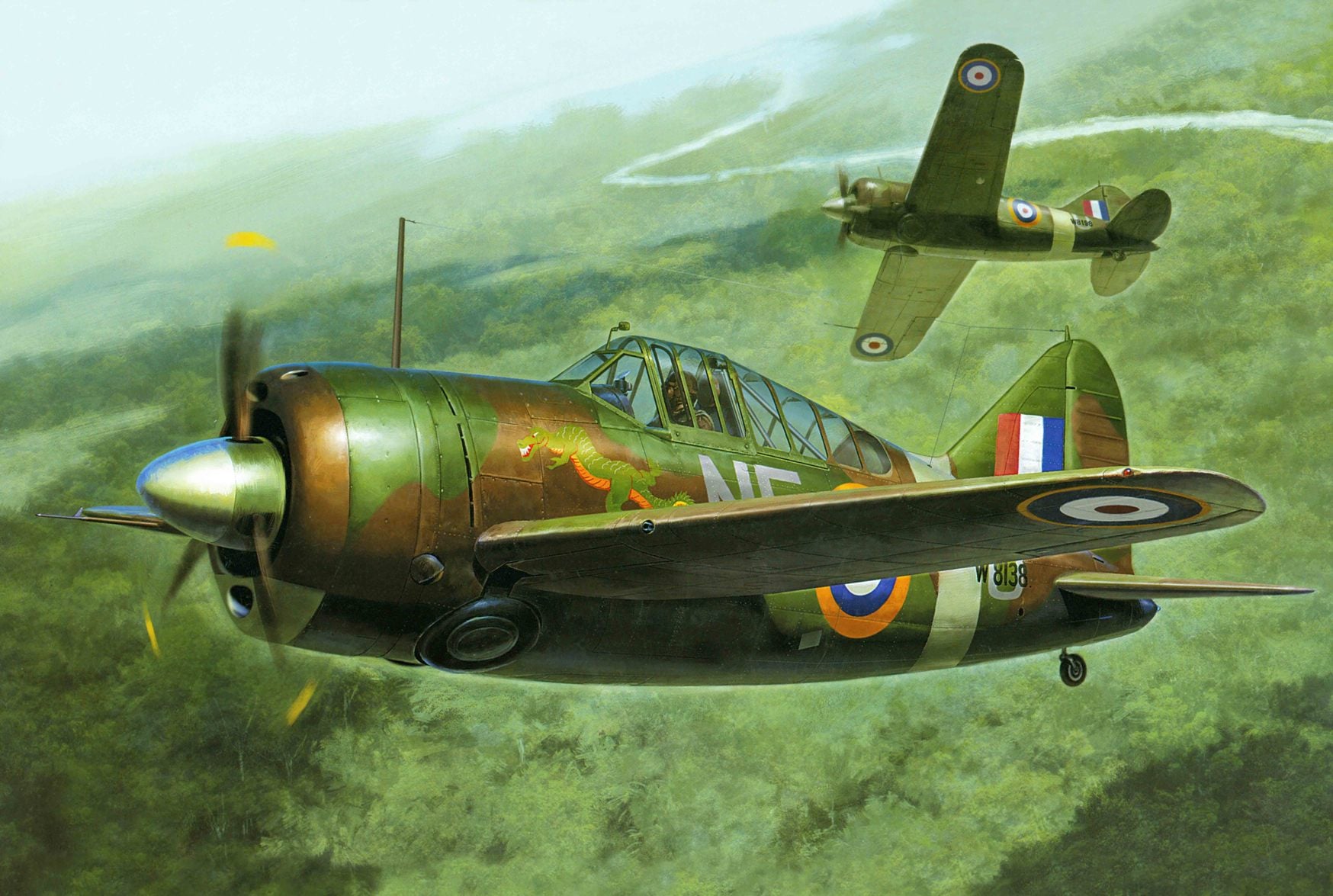 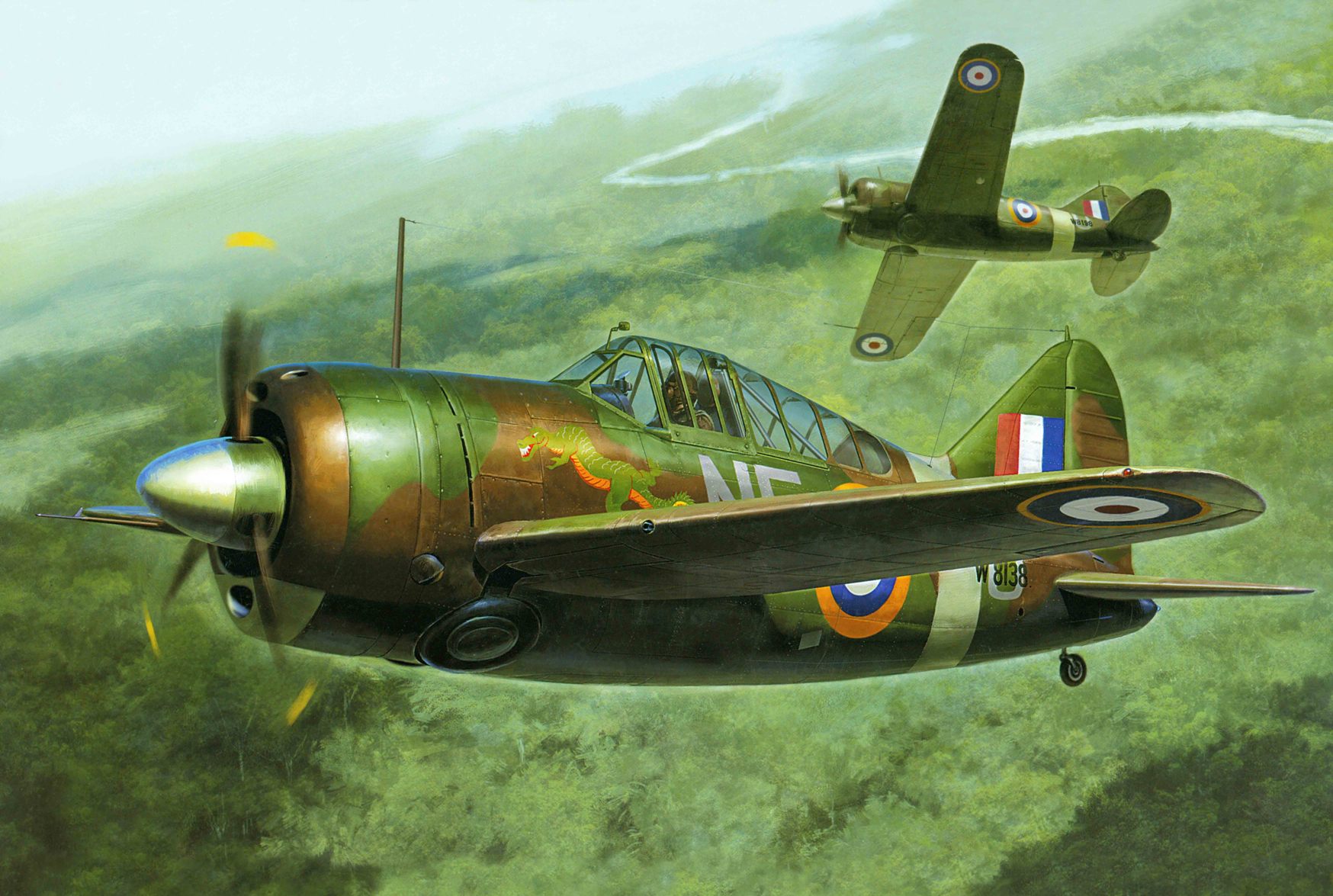 Carrier-based fighter BREWSTER F2A Brewster company was the first fighter monoplane taken into service by the Navy of the United States. Designed in 1937, the beginning of the Second world war he was already considered outdated. Japanese aircraft were superior to it in flight characteristics and firepower. However, the plane was successfully used not only in the US but in other countries, and its combat use by the pilots of the Finnish F2A puts in one number with the most outstanding fighters of the Second world war.

The firm of Brewster, specialized in the manufacture of horse-drawn wagons and carriages, was founded in the XVIII century. At the end of the XIX century it began to develop the production of cars, and after the First world war came in the aviation market and received my first order — the manufacture of floats for seaplanes. The beginning of “Great depression” put the company on the brink of bankruptcy, and then, in February 1932, James Wark, formerly employed as engineer at the naval aircraft factory in Philadelphia, brought together a group of investors and bought the moribund firm.
In October 1934, the firm was able to obtain a contract from the Navy to build a scout-bomber of its own design XSBA-1. It was an all-metal monoplane with retractable landing gear and the bomb Bay to 227 kg of bombs. The first copy was built April 1936. In 1937, the plane showed the maximum speed 423,2 km/h. All built 13 cars. Until 1942 they flew in the combat squadron VB-3, and then they were transferred into the category of training machines (squadron VT-8).
In 1935, the leadership of the Navy has offered the firm of Brewster to participate in the competition to design a new fighter to replace the GRUMMAN F3F biplane. As a result of competition, the fleet wanted to get a new plane with a maximum speed of not less than 482,7 km/h. the competition was also attended by such famous companies like Grumman and Seversky.
The new fighter received the designation b-139, looked pretty unusual for American cars — he looks like the famous Soviet fighter N.Polikarpov I-16. In-139 had a very short barrel-shaped fuselage and cantilever wing. Main landing gear — retractable. The wheels were hiding in the fuselage, and the stand — in wing. The design of the fuselage and wing all-metal. Control surface tight fitting cloth. The most original element of the structure was a transparent window in the floor of the cockpit. The aircraft was intended to use engines Wright XR-1690-02 or a Pratt and Whitney XR-1535-92. The screw is three-bladed variable pitch. The main armament consisted of two synchronised 7.62 mm and 12.7 mm machine guns. In the future, the wing provided space for the installation of two 12.7 mm machine guns.
In 1936, the Navy ordered the firms to competitors one prototype fighters for comparative tests. The Grumman aircraft company received the designation XF4F-1, Brewster — XF2A-1 and Seversky fighter company called NF-1. During the development on the XF2A-1 decided to put a more powerful nine-950-horsepower engine, single-row Wright R-1820-22 CYCLONE — equipped and NF-1.
Assuming that the biplane XF4F-1 is unlikely to have a chance for success in the competitive rivalry with the fighter-monoplanes, designers of the firm Grumman immediately began the development of the monoplane. On his set chetyrnadtsatiletney engine Pratt and Whitney R-1830. The second of September 1937 under the designation XF4F-2, the aircraft rose into the air. During tests it reached a speed 466,6 km/h. Following, September 24, 1937, flew NF-1. Its maximum speed has not risen above 402,3 km/h. the Pilots complained about low lateral stability and, in the end, the Navy rejected the car. Fighter of the firm of Brewster pulled away from the runway the latest — December 2, 1937. But its top speed was 16 km/h lower than the XF4F-2.
Constant problems with the power plant from the XF4F-2 would give the firm Brewster some slack time for fine-tuning your plane. XF2A-1 was sent to Langley for studies in full-scale wind tunnel. Purge showed that the maximum speed can be increased to 48.3 km/h by improving the cooling circuits of the engine, carburetor air intake and closing of niches fairings of the landing gear. The design of a fighter modified by selecting all of the recommendations of the most simple to implement. It turned out that the only alteration of the carburetor air intakes and oil cooler will significantly increase the maximum speed (up to 489 km/h at an altitude of 4877 m) and climb rate (up to 838 m/min). Pilots raved about the maneuverability of the aircraft. Thus, the requirements for a new carrier-based fighter, was fully satisfied. The first series of the fighters of the firm of Brewster F2A-1 of the 54 aircraft, the US Navy ordered 11 Jun 1938. It was the first fighter monoplane to be adopted by the armament of carrier-based aircraft.
Production aircraft F2A-1 differed more powerful engines of the company Wright R-1820-22 with a capacity of 950 HP and a lot of changes in the design. To improve visibility has been changed cabin Windows, and enlarged Windows in the floor, was installed telescopic sight, the front of the radio antenna moved to starboard. The first two machines had the keel is of elliptical shape, but others used triangular keel larger area.
The first aircraft became available to the fleet in June 1939, and by November the firm was transferred to the fleet of only five cars. In parts revealed the unpleasant feature of the new fighter — the cab got engine exhaust and sailors demanded remedy this serious drawback.
At the beginning of 1939 the governments of several European States, considering that the next war can not be avoided, began to show an interest in American military equipment. Did not remain without attention and American planes. In August 1939, the Polish government ordered 250 fighter F2A-1 Brewster company. But aircraft deliveries for this order has not begun.
In September 1939, the representatives of Finland appealed to the US state Department with a request to allow the purchase of American aircraft. A military conflict between the USSR and Finland has accelerated the harmonization of the details of the Treaty, the Americans agreed to sell the Finns 43 F2A-1, previously intended for its carrier-based aircraft. Firm Brewster has committed to replace these aircraft on the decks of aircraft carriers in the same number of new F2A-2. However, because of sabotage in Finland was only eleven F2A-1.
In 1940 the leadership of the Navy was required to install additional 12.7 mm machine guns in the wings before F2A-1. After work began it became clear that the chassis potjazhelevshie machines can not withstand loads during landing and the aircraft returned to the company for improvements. 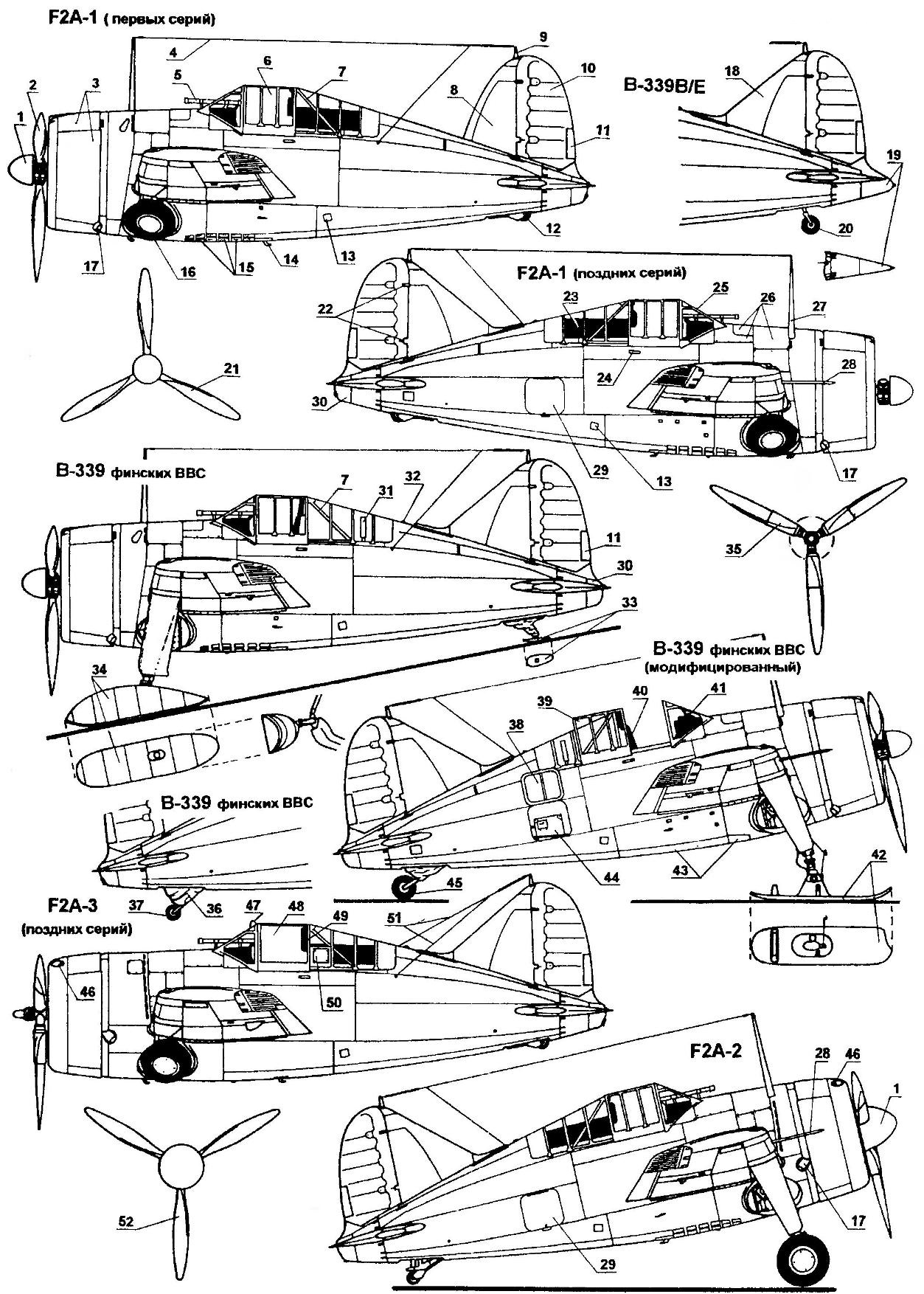 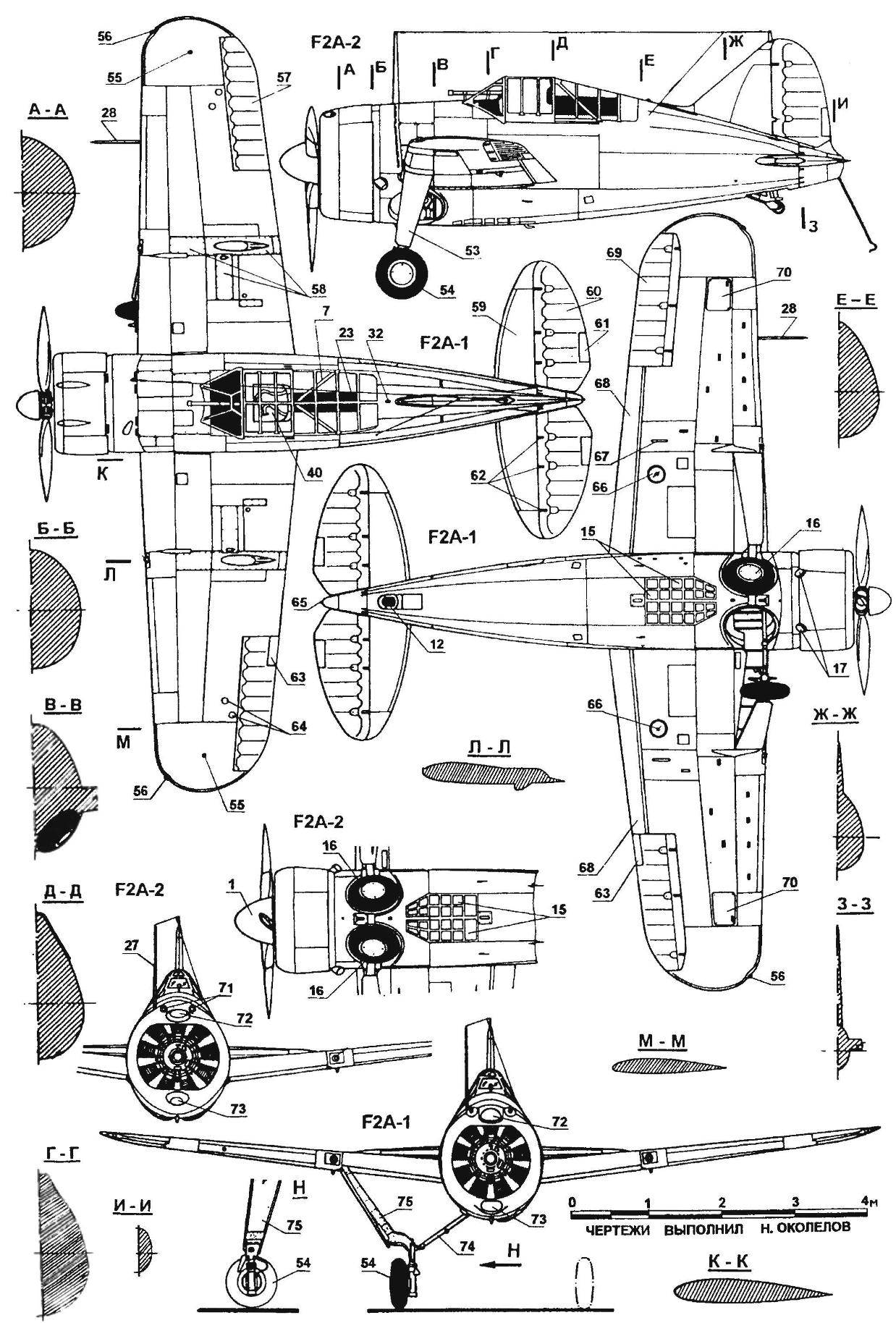 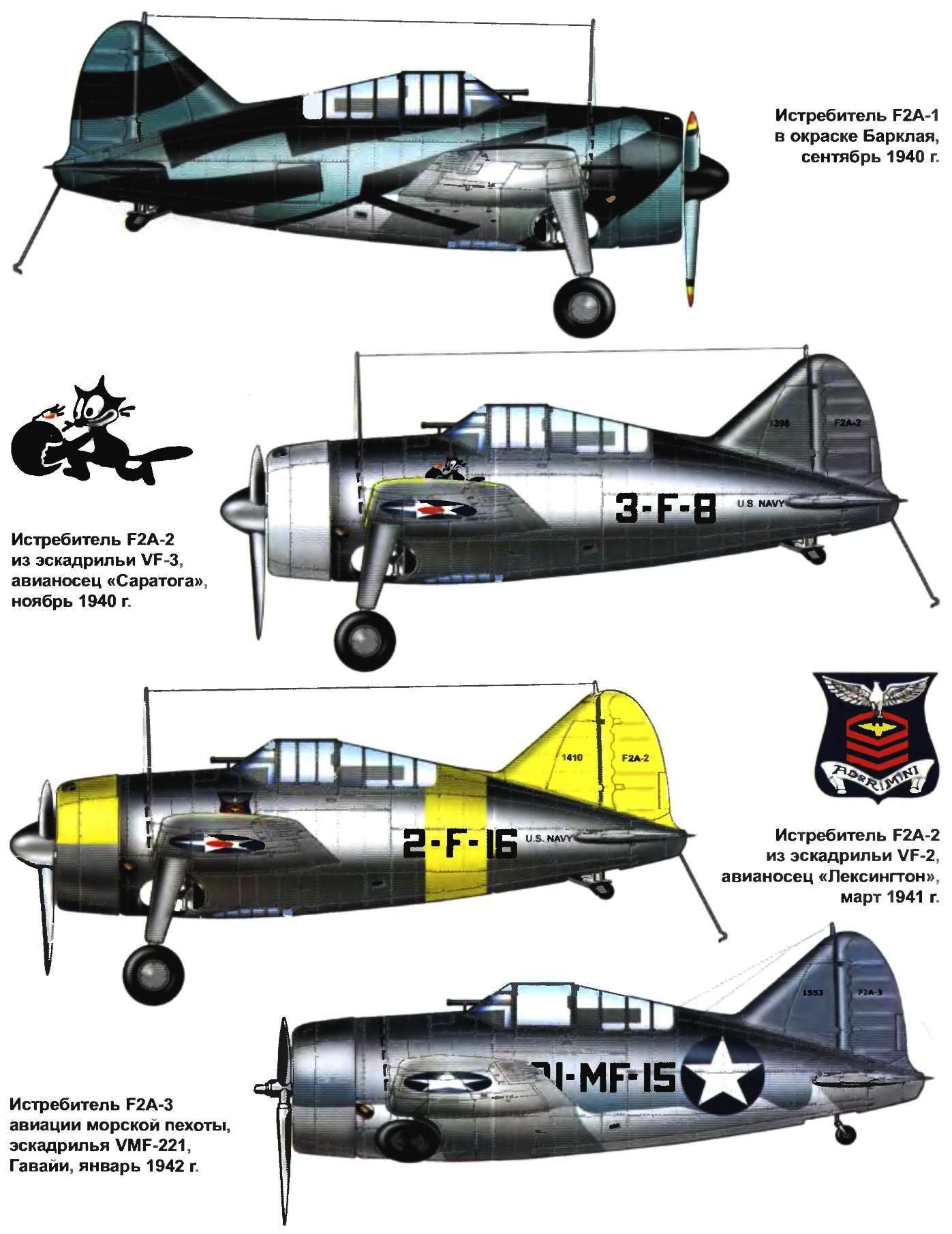 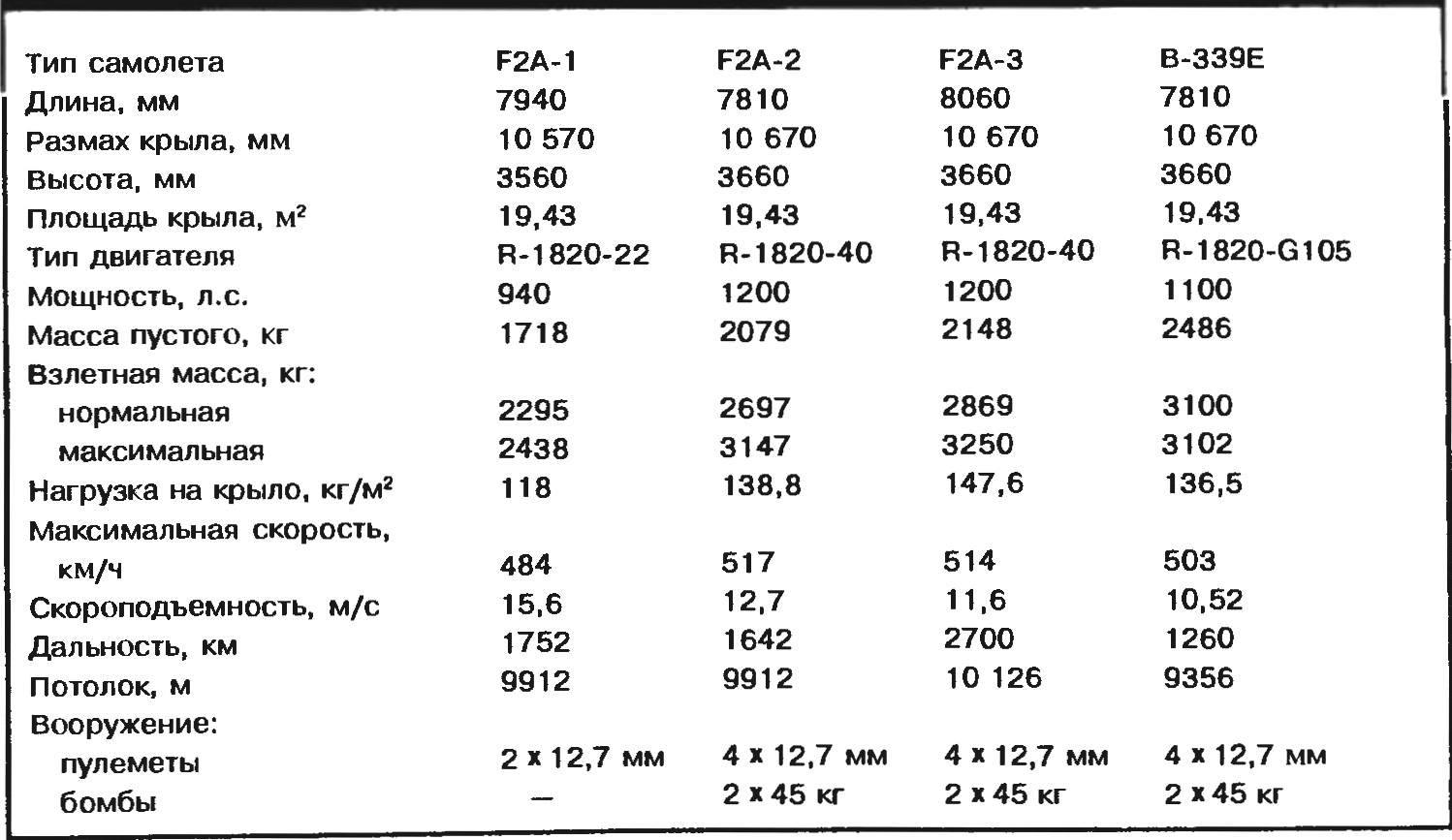 The tail Assembly of a conventional circuit. The keel was integral with the fuselage. Elevators and areas for relief efforts on the control stick and pedals were operated trimmers. Rudders — mixed: the rudder, a flexible cable, elevators — hard. All wheels had a fabric covering.
Chassis tricycle with a tail wheel. The system of harvesting and the landing gear is hydraulic, with possibility of emergency mechanical release manually. Control of the flaps-flaps and landing a hook is also hydraulic. Main landing gear characteristic curved shape equipped with flaps that covered the niche in the wing. In special niches of the fuselage was hiding main wheels. Skid had a small all-rubber wheel-roller and retracted back into the fuselage. This crutch was placed only on carrier-based aircraft. Fighters built for export were equipped with a spike fixed gear wheel of larger diameter with Pneumatics.
The power plant consisted of nine single engine of air cooling Wright R-1820-40 CYCLONE with a capacity of 1200 HP, equipped three-blade propeller with a diameter of 2700 m, or Curtiss Electric with a diameter of 3070 mm.
Armament consisted of four machine guns. Two synchronous machine gun Colt-Browning 12.7 mm mounted in the upper part of the fuselage in front of cockpit. Two machine guns of the same caliber stood in the wing and shot out the rotor swept zone. Sight telescopic, tubular — type “al’dis”. On two underwing bomb racks provided for the suspension of bombs caliber up to 45.4 kg.
N. Food reserve was, A. CHECHIN, Kharkov