This project began with specification E6/41, dated November 1941 In her Ministry of aviation industry of great Britain has offered the firm “de Havilland air craft company” to explore the issues of creating a jet fighter and engine for it. By that time, the company proactively developed an experimental twin-boom DH’s car.99. It was a single-engine monoplane of all-metal construction with a tricycle landing gear with nose wheel. The development of the engine in April 1941 did the firm “Halford”, headed by Frank Halford, simplifying the design of the turbojet engine with centrifugal compressor and through the location of the combustion chamber between the compressor and the turbine.

But it was too late, and in April 1942 the Ministry of aviation industry granted the company a contract to build two prototypes (the prototypes brought to three) light single-engine fighter with four 20 mm guns. The project “de Havilland” was renamed the DH.100 “Spider Crab” (crab spider).
Having extensive experience in creating wooden structures acquired in the course of work on the bomber “mosquito” and its fighter version, the “Honiton”, decided the nose of a fighter to do proprietary technology from balsa and plywood with birch plywood paneling. The wing was all-metal construction with one of the power spar. Tail boom and tail were also all-metal. To ensure a minimal pressure losses in intakes, air intakes, having the form of a rotated letter “A”, placed at the base of the wing, close to the input channels of the compressor. The original design had a takeoff and landing mechanization.
September 20, 1943 the chief pilot of the company Geoffrey de Havilland (son of the founder and owner of the company) raised the first prototype (number LZ548/G) in the air from the factory airfield Hatfield. The aircraft was equipped with an engine Halford N. 1 1225 thrust (according to others — 1130) kgs. The whole flight was normal, although showed some yaw instability, and increased reaction roll on the Aileron. Note that the first flight of second British jet aircraft took place only half a year after the takeoff of the fighter “meteor” company “Gloucester”, although the design creation de Havilland began two years later Macapa work on the “Meteor”.

The first prototype of the DH. 100 (LZ548) during the test, 1943
Second prototype, with a modified form of the keels and the position of the stabilizer, took to the skies on 17 March 1944, Later it was used as a prototype carrier-based variant of the fighter, which has been significantly improved.
Interestingly, the third prototype, fitted with a modified engine.1A is the same thrust as N. 1, along with a set of cannons, first flew earlier than the second, 21 Jan.
The stage of factory tests prosep fairly smoothly, although the problem of directional instability completely failed to solve. During the tests, the third prototype was noted by the decreased rate of climb and slower acceleration, which was associated with an increase in takeoff weight due to the installation of weapons. Also increased the takeoff run and takeoff speed. Both characteristics were higher than comparable reciprocating machines. But neither the designers nor the military is not razocharoval, as serial machines predpolagalos the installation of more powerful engines.
In April 1944, the third prototype passed army trials at the research center, air force Wax Down. Overall military pilots were positive. They noted the low level of noise in the cabin even at high speeds, convenience of the cabin, the absence of any difficulties for taxiing on grass field. As disadvantages called a tendency to limit the instability that reduced precision aiming in the use of weapons, and a wide cover of the canopy of the lantern, making it difficult for review (although the overall visibility from the cockpit was good).
The first batch 120 units under the designation Vampire F. 1 was signed in may 1944, and a month earlier had approved the name of the fighter “Vampire”. A year later, on may 7, the Ministry of aviation industry increased its initial order of 300 aircraft.
Since the serial plant of the company “de Havilland” in Hatfield has been busy manufacturing “mosquito”, the order placed on the company’s “English electric” in Preston, where he ended the four-issue “Halifax”. 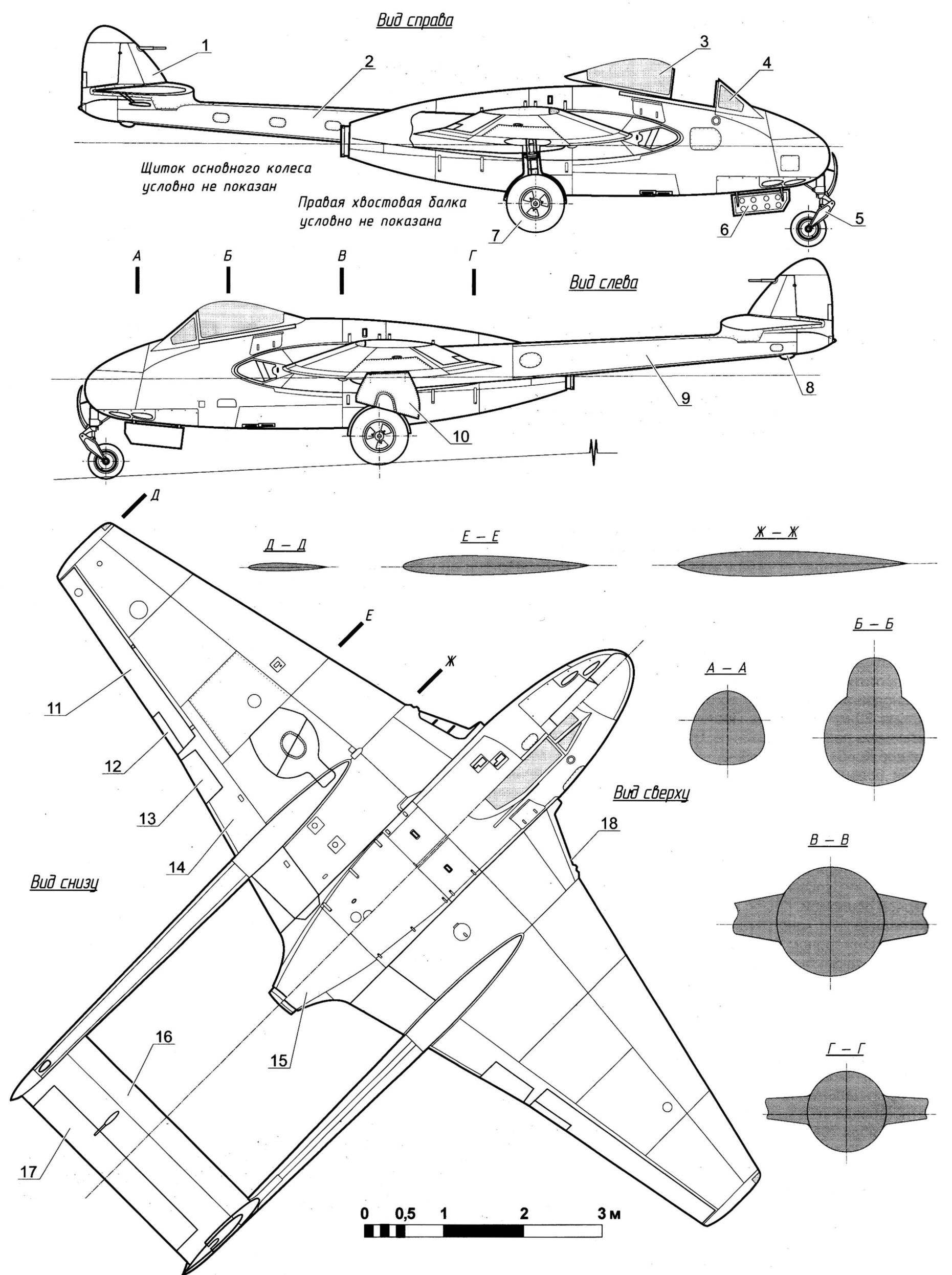 FB.5 “Vampire”:
1—vertical tail; 2 — left tail boom, right side view; 3 — movable part of the cockpit canopy; 4 — visor the cockpit canopy; 5 — the front landing gear; 6—fold niche cleaning the nose landing gear; 7—main landing gear; 8—caudal heel; 9—the left tail boom, left side; 10—scutellum niche cleaning the main landing gear; 11—Aileron; 12—trimmer Aileron; 13—brake; 14—the flap; 15—nacelle; 16—stabilizer; 17 is the wheel height; 18—air intake
On April 20, 1945 the first production F. 1 Vampire podnapise in the sky. By the way, the age of this machine was short-lived. In may — June plane ispitivanja military in Wax Down, and July 23, crashed on takeoff due to the failure of toplivnogo pump. Fortunately, the test pilot of the company “de Havilland” Jeffrey pike was injured.
The first 40 cars were equipped engine “Goblin” 1 (production version of the TRD with N.1), the next — the more powerful “Goblin” 2 thrust 1405 kgs. With this powerplant the aircraft reached a speed of 850 km/h at an altitude of 5500 m it was significantly higher than similar indicators serial “meteors”.
Starting from the 51st machine the fighters were equipped with a pressurized cabin. However, the previously released “vampires” to finalize this plan did not. And with the 87th machines have eliminated the comments of the military on the visibility from the cockpit, setting a very comfortable and technologically advanced a canopy movable part which moves back. Bulletproof glass visor lamp equipped with de-icing spray system with glycol. In a short time the new lights installed and most of the previously built machines.
The following version of the “Vampire” became F. 2 with a more powerful engine “Ning” the company “rolls-Royce”. Three fighters of the first series was equipped with the TRD RВ.41 2040 kgf thrust for testing. For enhanced air flow behind the cab mounted, two additional air intake, nicknamed the “elephant ears”. The Royal air force planned to order 60. but after the construction of two aircraft the order annulled. However, elephant ears did not bother the Australians, which F. 2 liked, and they built 80 fighters for its air force in the factory of the company SAS.
Small range and the flight duration was a disadvantage all early jet aircraft, and Vampire is no exception. In June 1945 on a modified F. 1 began testing a new wing with additional fuel tanks. The total fuel capacity was increased to 1500 L. have Been developed and new suspension 909-litre fuel tanks. For ease of maintenance and shorten the preparation time of the aircraft equipped with the system of centralized refueling.
The tests revealed an increase in ground instability, which led to the necessary redesign of the tail. Trapezoidal keels have replaced rounded and the horizontal tail was moved to their Foundation. Actually took the tail of the second prototype.
So there was a prototype (ТG275) “Vampire” — F. 3 made its first flight on 4 November 1946, Created in response to specification F. 3/47, the aircraft had an increased takeoff weight due to the greater supply of fuel, which of course affected his take-off and manoeuvring characteristics (in fact the engine remained the same — “Goblin” 2). But the military had a fighter with a maximum range of 2200 km against the previous 1167 km. 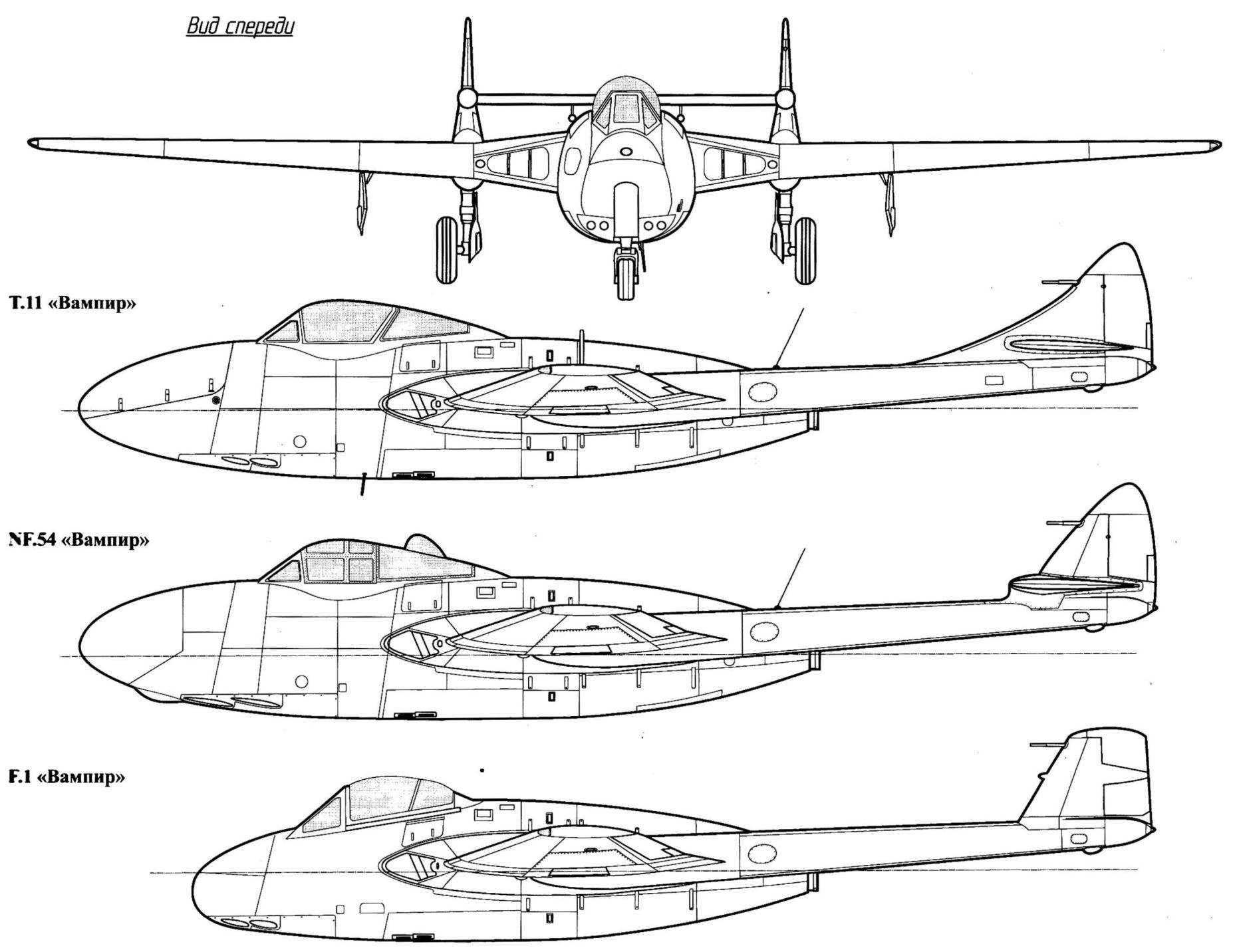 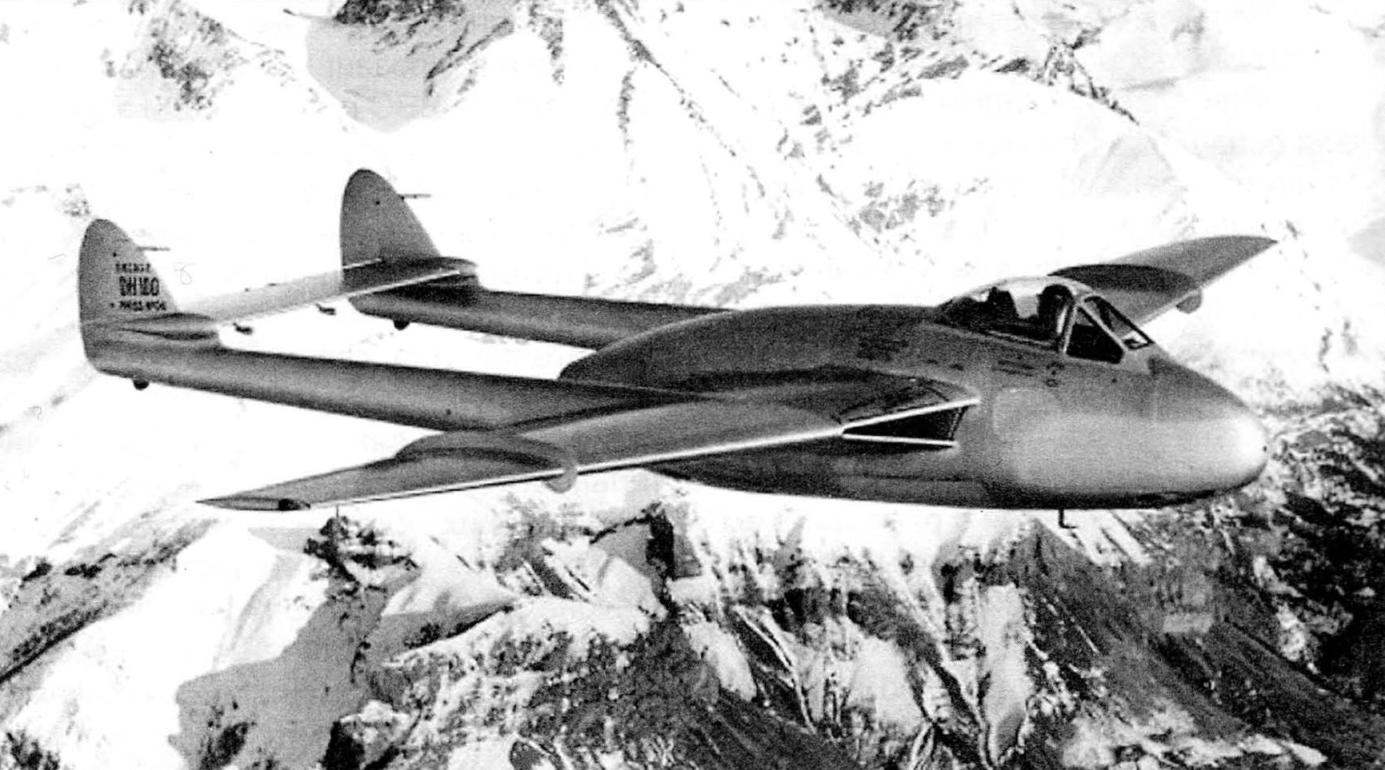 SE.535 “Mistral” of the French air force. Visible wider air intakes and the aerodynamic ridges on the wing 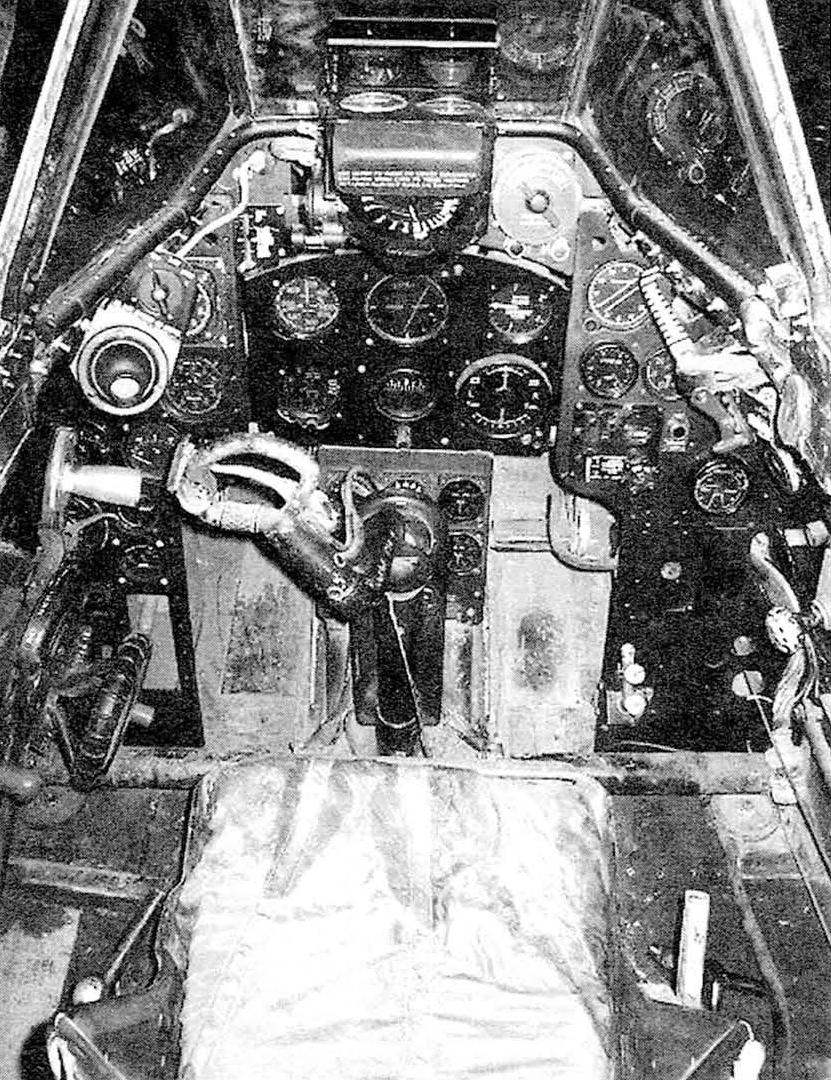