Guided missile anti-aircraft missiles V-300. It was designed to defeat aircraft with a flight speed of 1500 km/h at altitudes from 5 to 25 km and at a distance of 35 km the First anti-aircraft guided missile (AAGM) with radio command guidance was single stage, liquid fuel, pressurization feed system components.

Because of possible deviations from the target in the final stage of the flight because of the imperfection of methods of aiming missiles was equipped with a powerful high-explosive warhead (warhead) weight 235 kg. It is determined and the value of the starting mass of the rocket — 3,58 m. the Length of its body amounted to 11,425 m (with receiver air pressure -11,816 m) and a diameter of 0.65 m. SAM was adopted aerodynamic scheme “duck”, providing high-maneuver quality in all range of altitudes and flight speeds. In the nose of the rocket was located rudders to control pitch and rate, and in the middle of the body — developed wing on a couple of consoles which were ailerons for roll control.
Functionally, the rocket was divided into seven compartments In the nose housed the Pitot and radio controlled fuses (with antennas) providing undermining warhead near the target. He was located compartment of the warhead, and then the instrument with the autopilot and a spherical tank of compressed air. Then came the two load-bearing tank with internal valves, ensure a reliable supply of fuel components with alternating loads. They were connected by a small Minakova compartment, which also housed the instruments of the autopilot. And finally in the tail section were two Serbelloni compressed air, instrument radio command guidance and units four-chamber liquid rocket engine CO9.29, developed in NII-88 under the leadership of renowned designer A. M. Isayev.
As fuel was used samovosproizvoditsja pair: fuel— criticalincident (TG-02) and oxidant — concentrated nitric acid (f-1). Maximum thrust of the engine was 8 tons, the pressure in the combustion chamber — 22 ATM. the specific impulse of the engine is 2100 NS/kg. Pressure supply system of fuel components used compressed air. The main materials of construction the missiles were aluminum alloys, with the exception of the oxidizer tank, which is made of acid resistant steel.
Low thrust missiles was determined using a vertical launch, as well as the combination of aerodynamic and gas-dynamic controls. Gas rudders, mounted on the farm were located to cut launchers with liquid rocket engine (LRE). After about 9 s after the start upon reaching flying speed, sufficient for effective work of the aerodynamic rudders, farms would fold
Start with a simple rocket launch pad, consisting of a lower fixed part and a rotatable upper of the lower four was fitted with self levelling and multi-faceted pyramidal divider gas jet. On the upper end there were a couple of guide pins for anchoring the gas rudders. The table had a slope of 3 degrees in the direction of the sector of fire. The rocket was attached to the four locks-latches. Power is supplied on Board by the cable through bystrooborachivaemy side connector When the engine is started and reaches a certain level of thrust gas flow is turned a checkbox on the launcher homescreen, which provides simultaneous opening of locks. When installing missiles along with it were raised to a vertical position of the cargo truck, which after fixing missiles on the launch pad were lowered into a horizontal position.
Tests of the missile began in July 1951, was completed starts for real purposes in may 1953 during the tests it turned out that SAM (the product “205”) do not fully meet the requirements of the customer. Thus, the maximum height of the targeted objectives were only 15 km against preset 20 — 25 km, the slant range of 20 — 22 km instead of 30 — 35 km and necessitated the development of improved versions of the missile: equipping it with a more effective warhead. the use of more advanced engine and lightweight fuel injection.
In late December 1952, the government decided to bring the tactical and technical characteristics (TTX) missiles to the desired level. Produced two alternative SAM — products “207” and “207A”, differing engines. For further elaboration took the last equipped with more sophisticated single-chamber LPRE S2 260 designed by A. M. Isaev. This engine had a maximum thrust of 9 tons, the pressure in the combustion chamber and 26.5 ATM. the specific impulse of the earth — 2210 NS/kg.
To increase the specific impulse of the engine used oxidizer AK-20 (nitric acid with additive 20% of nitrogen tetroxide), which allowed to refuse from starting of fuel and, in turn, tore the tank and front Serbelloni, and ultimately to reduce the consumption of compressed air has the opportunity to use a lighter gas rudders, to abandon the frame of their attachment, thereby eliminating the relief of such a heavy object to the starting position. 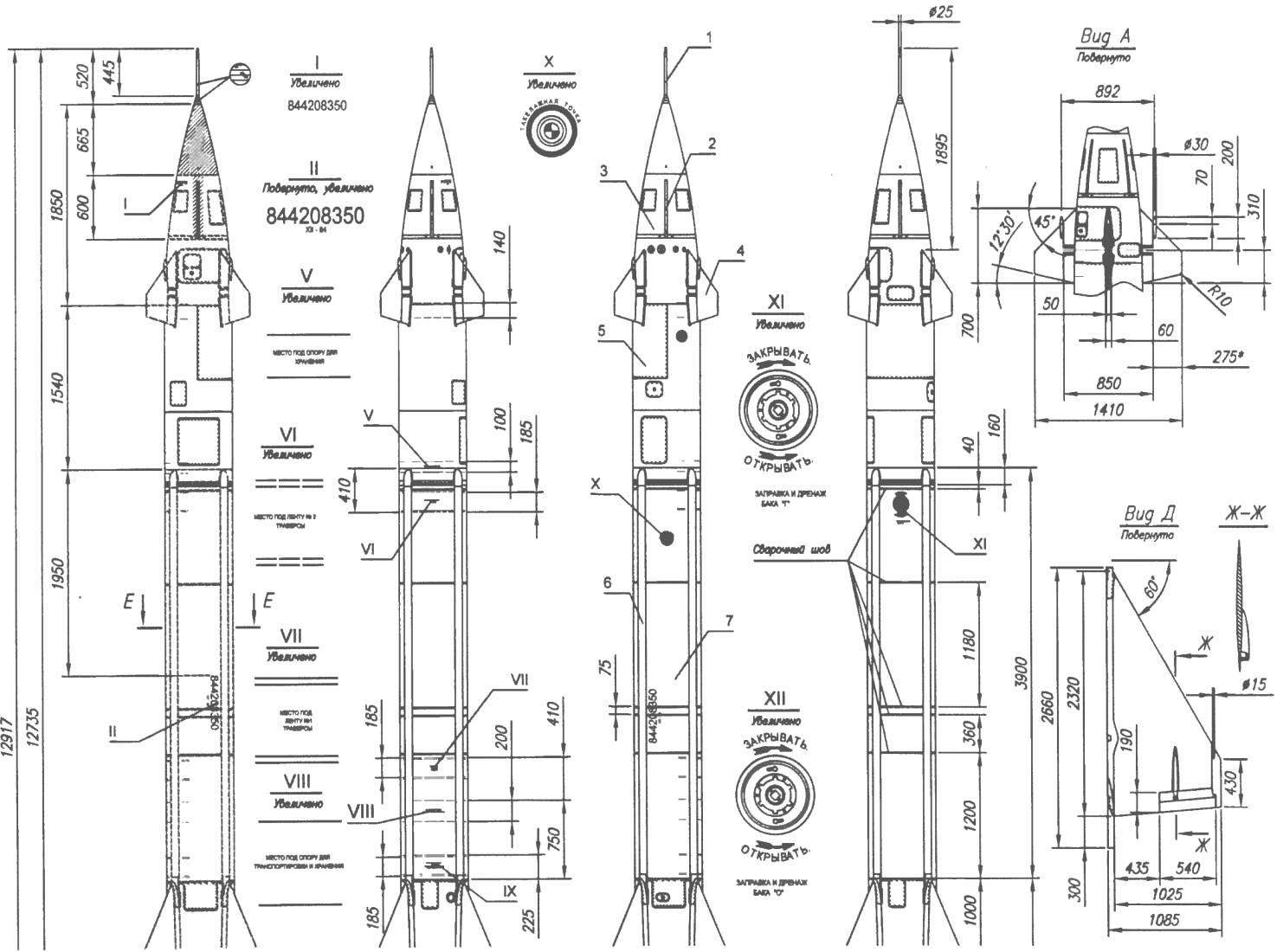 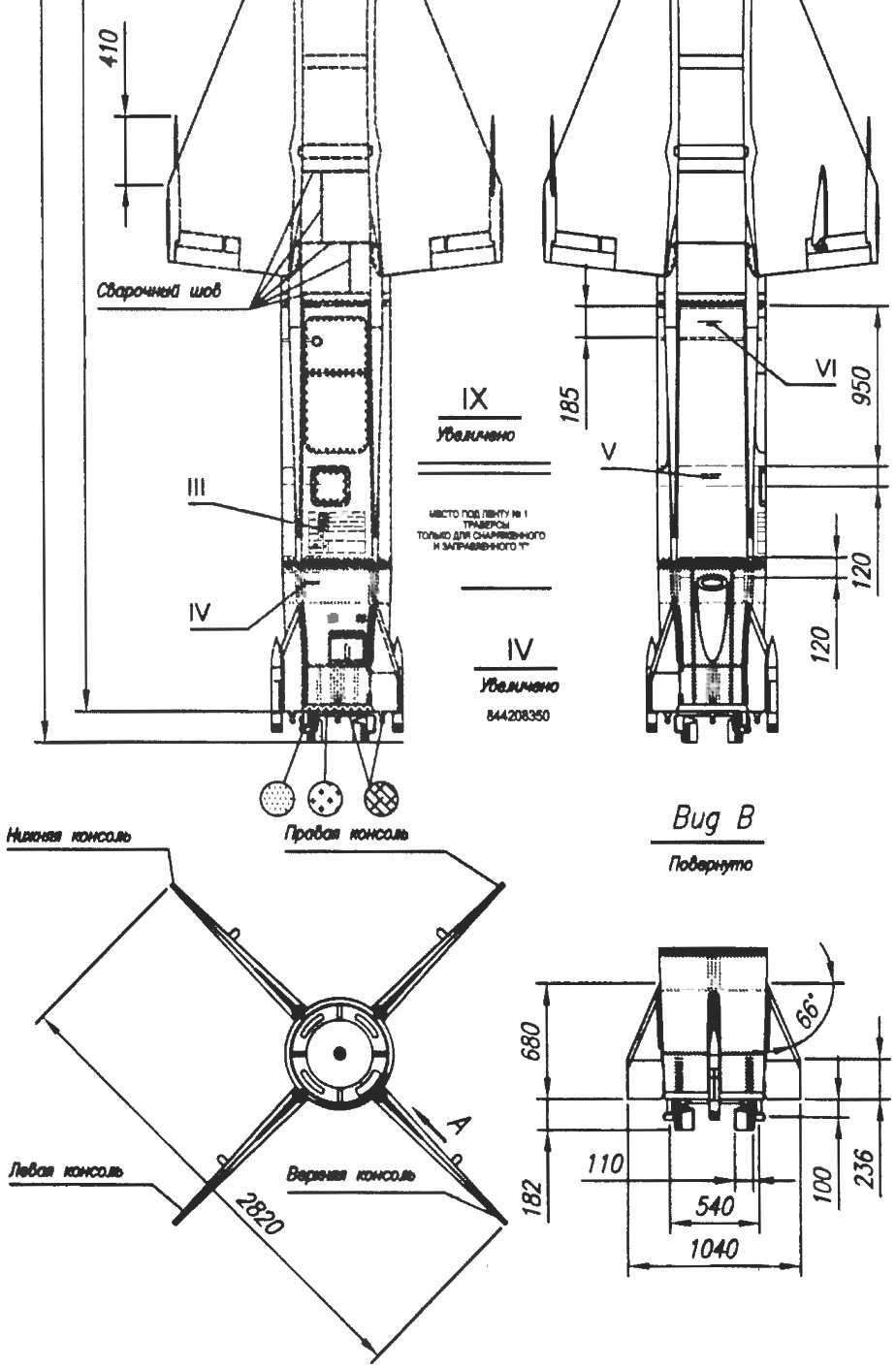 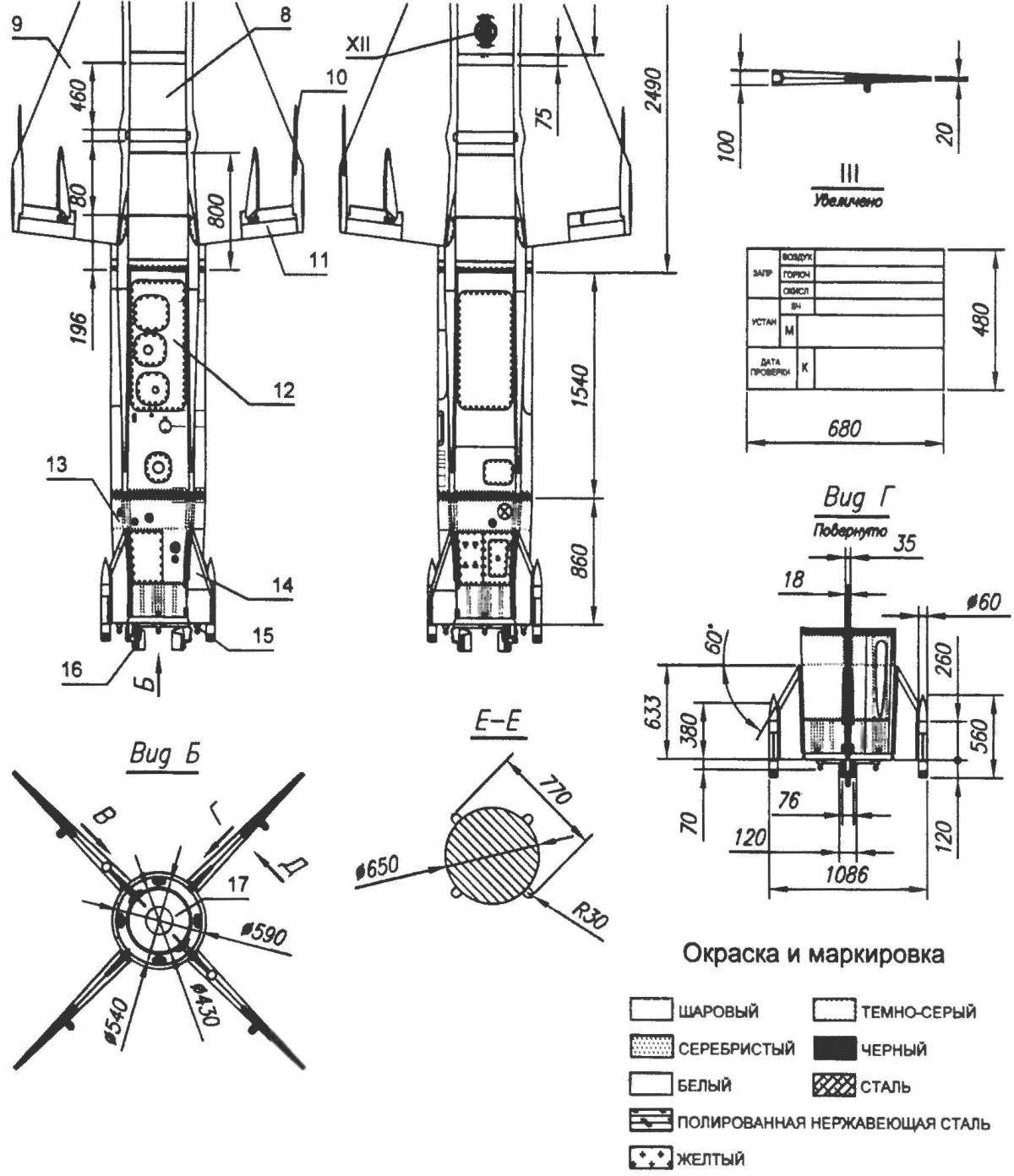 Zone supports, labels and serial numbers – BLACK
Gas wheels are phenolic plastic.
* ) the scope of the helm console.
Anti-aircraft guided missile V-300 (izdelie 218):
1 receiver air pressure; 2 — antenna radio controlled fuses; 3 — the nose cone; 4 — rudder; 5 — compartment of the warhead; 6 — gargrot; 7 — fuel tank; 8 — oxidizer tank; 9 — wing; 10 — receiver air pressure (set on the upper and lower consoles wing); 11 —Aileron; 12 — instrument compartment; 13 — tail section; 14 —stabilizer; 15 — start-up support; 16 — gas rudders; 17 — liquid rocket engine C5.1A
The wing design was changed, as a result, the number of compartments of the hull was reduced to six. Launch mass of the rocket has reduced to 180 kg (up to 3405 kg). Instead of high-explosive warhead was used the cumulative weight of 318 kg and a new attack with a radius of 70 m. response
Already in 1953 held launches “207A”, in General, confirmed the stated performance characteristics.
At the end of June 1954, a full-scale anti-aircraft system s-25 was presented on state tests. This time value range 30 — 35 km and a height of 20 — 25 km was responsible specified requirements. The maximum speed of the rocket reached 3670 km/h, and develop cross overload was 6 units at heights from 3 to 15 km and 4 units — at an altitude of 20 km and the time of the installation on the launcher — 6 — 7, active flight — 56 — 61 p. Outfit of the three rockets could be launched within 8 s. the Maximum time that an alert 12 min.
During the tests, spent 16 successful launches. Missiles hit all the targets.
Thus, the main indicators C-25 consistent with specified requirements. In may 1955 at the completion of state tests it was adopted. Leaders in the development of missiles V-300 noted by government awards.
In 1955 — 1958 work was carried out to create modifications In the SAM-300 (products of “215” and “207Т”), equipped with a nuclear warhead. This allowed to greatly increase the efficiency of the system when firing at group targets. In those same years, he developed a new modification of missiles (product “217”) under a more powerful rocket engine with a thrust of 16 tons, and 1959 — modification “217M”. For her EDO
A. M. Isaev has created a new engine C5.1 with an adjustable rod. He had a tour bonusesnew supply system of fuel components, which will significantly relieve the fuel tanks. The engine can develop a maximum thrust of 17 tons (minimum 5), specific impulse — 238 NS/kg, the pressure in the combustion chamber is 48 ATM. Working time is 70 s.
In addition, this modification used the new units of the radio system and radiovision, as well as a new warhead (directional) and radio controlled fuses. The most noticeable external difference of this modification In the SAM-300 is that aerodynamic design has taken the form of a Triplane. Appeared empennage, wingtips which housed the antenna of the radio and radiovision. The design of the rockets found the use of titanium alloys. The increase in thrust of the engine has increased fuel capacity and a more powerful warhead. Missile length totaled 12,353 M.
Tests of this modification began in 1959 In 1961, a rocket “217M” adopted in the complex WITH 25M. The maximum reach target height increased to 30 km range — more than 35 km, and Ensure the defeat targets flying at a speed of 2000 to 2900 km/h, while the average flight speed zour amounted to 860 m/s and the maximum reached hypersonic. Along with the main variant of the family of missiles “217” was studied modification, equipped with a nuclear warhead, is a product of “218”.
In 1964 — 1968 developed missiles “217МА”. It was planned to increase the efficiency of the rocket through the application of the warhead with a mass of 390 kg and a combined fuse optical and radar channels. The rocket was equipped with viewskim 5Д25 engine with higher specific impulse and variable thrust from 18.5 to 5 t, as well as a new autopilot (dual stability system) and radio equipment. Improves maneuverability, especially at high altitudes. The maximum speed of the missile is brought up to 1550 m/s and the altitude Range of targets has expanded from 1.5 to 35 km due to the pointing to the passive phase launch range increased to 56 km.
In 1968 and 1972 we developed a modification of missiles “217МАМ” (5Я25М), and in 1972 — 1976 — 5Я24. The border of hitting the target decreased to 500 m, and the maximum speed flight of high-altitude target at which she could be destroyed by missiles increased up to 4300 km/h. the Missile had a jamproof radio equipment and a warhead with a controlled field of fragments.
In 1976 — 1978 replacement products “218” created a modification of “44Н6” with a nuclear warhead which could provide the affected area height-from 3 to 35 km and the maximum range of 47 km. the new software was implemented additional measures to improve reliability and safety. Special measures were provided to prevent unauthorized missile launch. S-25 and its missile systems were removed from combat duty only in 1984
In addition, on the basis of Zur In-300 was created missile target: on the basis of the product “207A” — RM-207 “Protein”, “217M” seven choices: “Star-1”, -2,-3 -4, -4MB -5, -5F. Moreover, the altitude of certain types of targets up to 100 km or more. To control at these altitudes, they were equipped with newly developed gas-dynamic system of orientation. 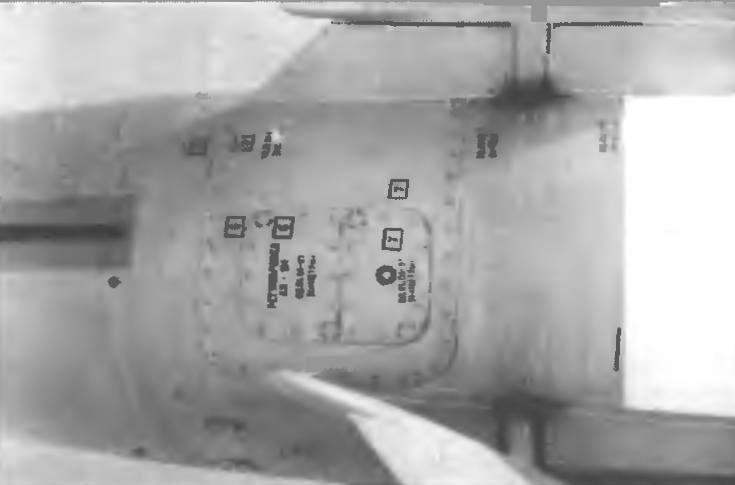 The nose of the rocket 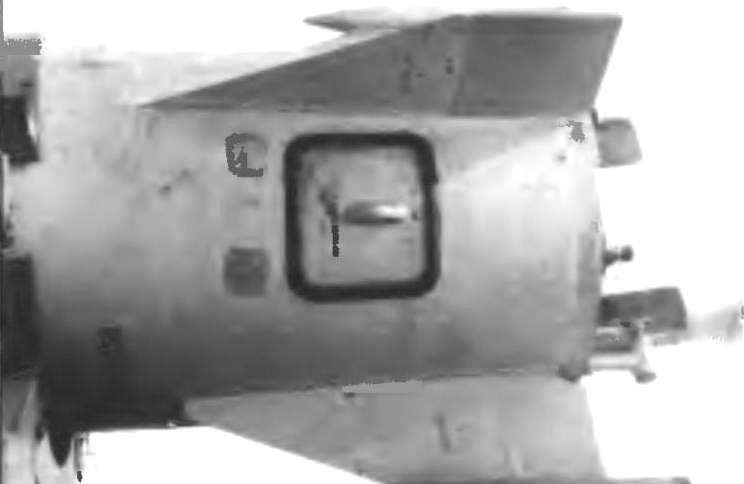 The tail part of the rocket 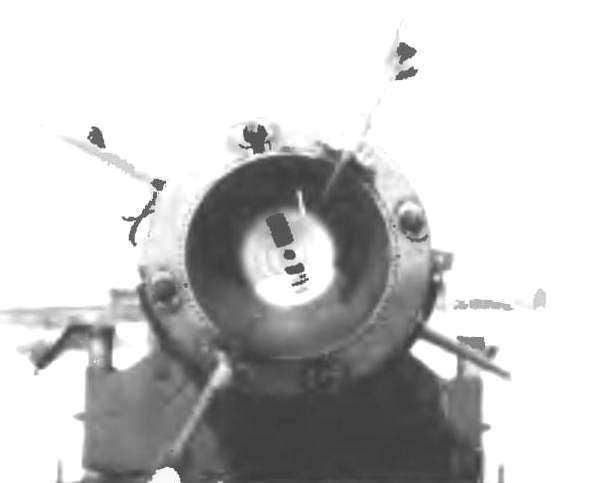 Rocket: rear view
Readers are invited to drawing missiles V-300, made on the model rocket display at the Museum at Khodynka.
Advice to modelers. Anti-aircraft guided missile V-300 can serve as a prototype to create the model-copies in class on realism of flight (S7) young rakatomalala, having relatively small design experience.
The simulation scale is chosen depending on the used model rocket engine (MRD) in order to fit it into the diameter of the nozzle With the 20 mrad is suitable scale 1:15 model-copy obtained is quite large. This allows to obtain visually beautiful flight (with a relatively small starting weight corresponding to driving performance of MRD) and will simplify the modeling of fine details of the prototype. In the end, the opportunity for young athletes to have good results in competitions.
For flight stability of the model is necessary to ensure a certain position of its center of gravity. In the starting configuration at model scale 1:15 he is at a distance of 480 mm from the nozzle housing. To improve the reliability and get a higher grade for the flight, it is desirable to divide the model for descent into two parts — head and main. Each of them needs to come down on his parachute.
V. MINAKOV, engineer
Literature
1. Evtifeev M the history of the missile shield Russia. M., University book, 2000.
2. The first M anti-aircraft missile systems of air defense of ground troops. M., Technology of weapons, 2002
3. The first M anti-aircraft missile defense systems of the country. M., Technology of weapons, 2003.