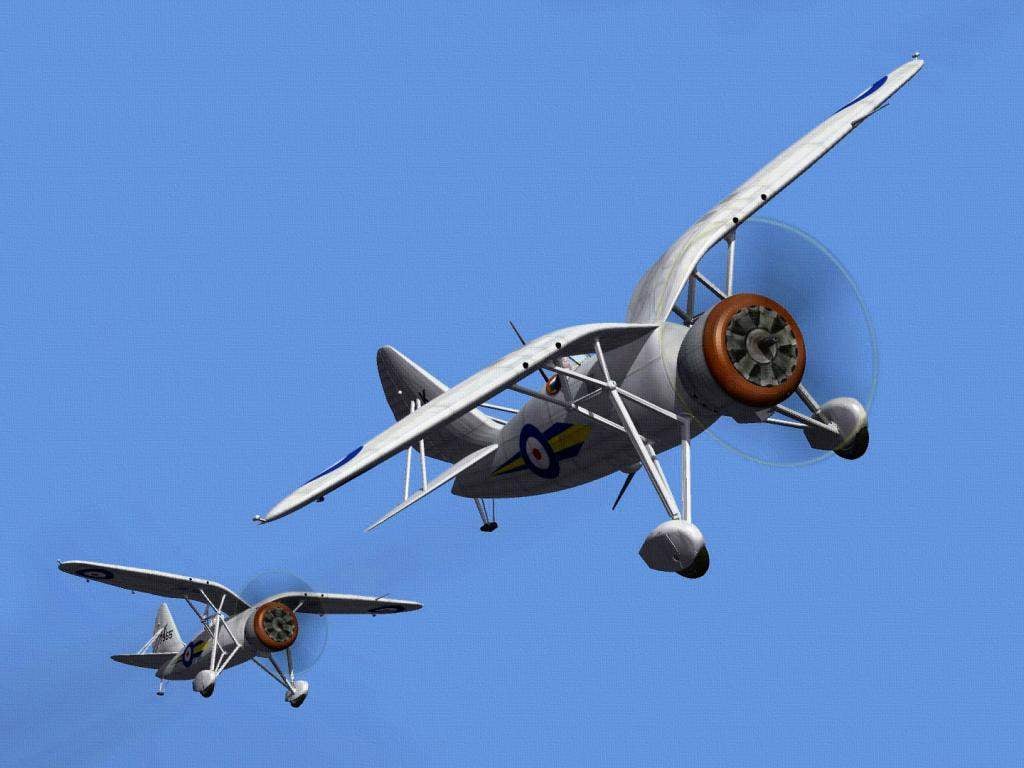 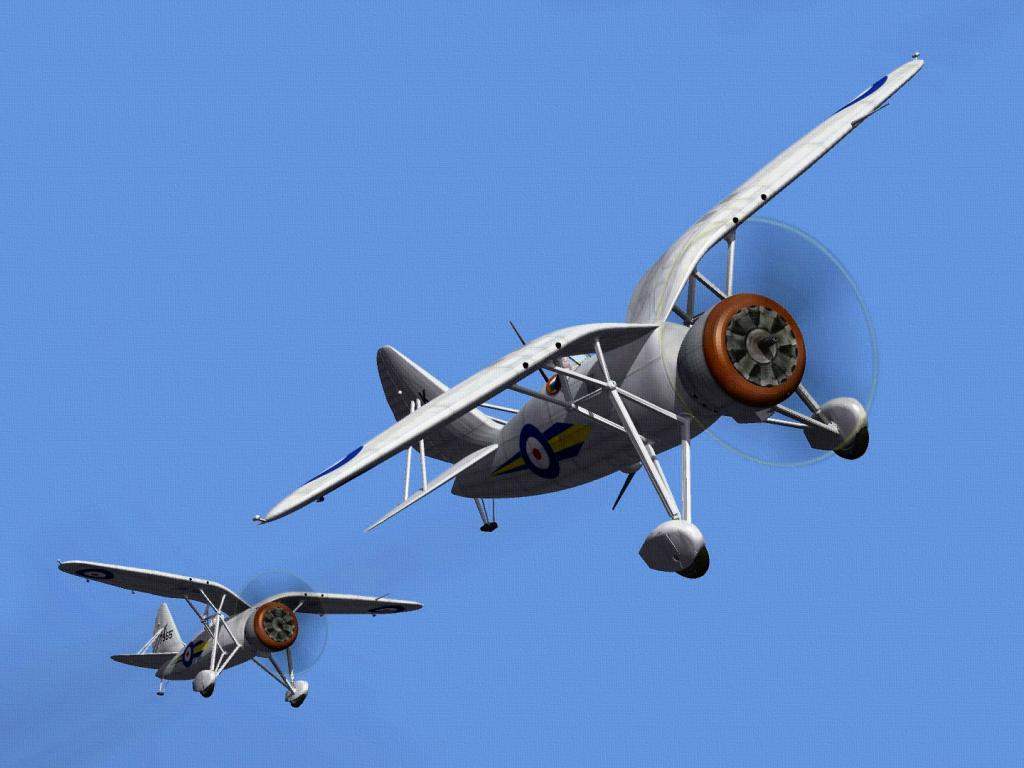 The period between the two world wars represents a considerable interest to historians of technology, and first equipment of aviation. The aircraft of this time, the construction of which has absorbed the existing scientific, technical and technological achievements, remained nevertheless the bearers of the greatest characteristics of the airplanes of the First world war.

Most of these aircraft in combat operations to participate had they finished their service before the start of a new war. Smaller managed to do some fighting in local conflicts of the 1930-ies and left their mark in military history. It is to the latter belongs the French LOIRE 46 fighter.
Small firm Loire, located on the North-West of France, in the town of Saint-Nazaire (Saint-Nazaire) at the mouth of the Loire river, in the beginning of its activity was not engaged in creation of own aircraft. Aviation manufacturing firm first came into contact in the late 1920-ies in the preparation of the production license fighter Gourdou-Leseurre 32.
Development of production of a modern aircraft has allowed the firm Loire to begin developing own fighter. It was designed in accordance with the program, called C1, was designed to replace the standing armed aircraft NiD 62, LGL 32 and WIBAULT 72.
The designers could choose one of three options: four machine guns (ammunition 300 rounds per gun); one 20-mm cannon with an ammunition supply of 60 rounds and two machine guns with ammunition for 300 rounds), two 20-mm cannon in the wing with an ammunition of 60 shells.
All of these requirements and further continuously adjusted by the military, which created additional difficulties for developers.
For the design of the new fighter was created by a design team of nine. And a year later they created the fighter LOIRE 43 — plane, which is considered the predecessor of the LOIRE 46. In accordance with the program C1, the design of the LOIRE 43 was all metal, even the trim control surfaces were dural.
The wing performed “the Seagull.” It was thought that the pilot have a better view from the cockpit high plan as the conduct of air combat and landing modes. The LOIRE 43 fuselage behind the cowling was oval section. The stiffness of the tail relatively small area provided a V-shaped profiled struts. The chassis had a long trapezoidal stand, the wheels were left without brakes.
In-line engine water-cooled Hispano-Suiza 12 Xbrs power 690 HP was good zakoptelova: removable panels provide easy access to the power plant. The engine was rotated two-bladed metal propeller with a constant pitch.
His first flight of the aircraft was made on 17 October 1932. Tests ended tragically on January 14, 1932, during the next flight on maximum height, LOIRE 43 crashed, the pilot died.
At this time the firm was over the construction of a better fighter LOIRE 45, created by a firm own initiative. The main differences to build planes from the LOIRE 43 steel radial engine air-cooled Gnome-Rhon 14 Kds and changed the structure of the main chassis. Armament of the fighter consisted of two 20-mm Oerlikon guns installed in a special wing compartments. The wheels are covered with fairings, two-blade propeller replaced the three-blade.

Serial fighter LOIRE 46 of 1st squadron 6th aviation group
February 20, 1933, the chief pilot of the company Loire made on a new plane the first familiarization flight. In June, after the merger of firms and Loire Nieuport, for the tests involved the pilot of the Nieuport company.
In late September 1933 began the official test LOIRE 45 in the middle of testing aircraft (SEMA). Military pilots found that the aircraft peretyazhelen, and visibility from the cockpit, especially forward, landing on the poor. For elimination of the revealed defects, the car was sent to the factory where the fighter jet to increase its thrust-weight ratio engine installed Gnome-Rhon 14 Kcs with a power of 880 HP in Addition, there was increased area of the vertical stabilizer, and to improve visibility changed geometry of the wing.
After you make the design changes, the aircraft re-transferred to SEMA to conduct comparative tests with other fighters mock battles showed that even with a new engine, LOIRE 45 lost to other fighters — it was difficult to manage and had insufficient maneuvering characteristics.
And again the long-suffering fighter was sent back for revision. It is still equipped with a more powerful engine Gnome-Rhon 14 Kfs 900 HP with a four-bladed wooden propeller. The plane took to the air on 18 July 1936, but by the time the military had already given up on this project.
Instead, LOIRE 45 the firm offered fighter LOIRE 46, which, in fact, was a completely new aircraft. In particular, the designers have changed the mate of the wing and fuselage, which greatly improved visibility from the cockpit; the newly designed engine mount, which allowed us to lower the engine, the axis of which was slightly below the horizontal construction of the aircraft — this also contributed to better visibility for the pilot. Was also modified and strengthened the design of the landing gear.
September 1, 1934, the LOIRE 46 fighter made its first flight. In the course of his in the future no serious defects were detected, and the leadership of the company decided about the transfer of an aircraft to SAM to continue the test. In October, the LOIRE 46 flew to the airfield SEMA. Military aircraft like the Loire and the firm has received an order to build a prototype series of five machines.
After the evaluation of the flight characteristics of the prototype LOIRE 46 was returned to the factory where his design made additional minor changes. Replaced the engine hood: now it was smooth, and the cylinder has ceased to act for its contours; and the wing installed a new cannon Oerlikon FF.
In may 1936, the firm has received an order for 40 fighters LOIRE 46. Production launched at the Nieuport factory. At the end of 1936 the order was increased to 60 machines. Most likely, an additional 20 fighters were intended for the government of the Spanish Republic, but under pressure from the Committee on non-intervention, the aircraft remained in the French air force.
The first production machine flew in February 1936. It is almost indistinguishable from the prototype. The only difference was the replacement of serial fighters of the two 20 mm Oerlikon FF cannons on four 7,5 mm MAC 34 machine gun with an ammunition load of 300 rounds per gun. The main reason for this was the weak wing design.
Change the composition of weapons detained the supply of mass-produced cars. All new arrivals were sent to the 6th squadron of the air force. 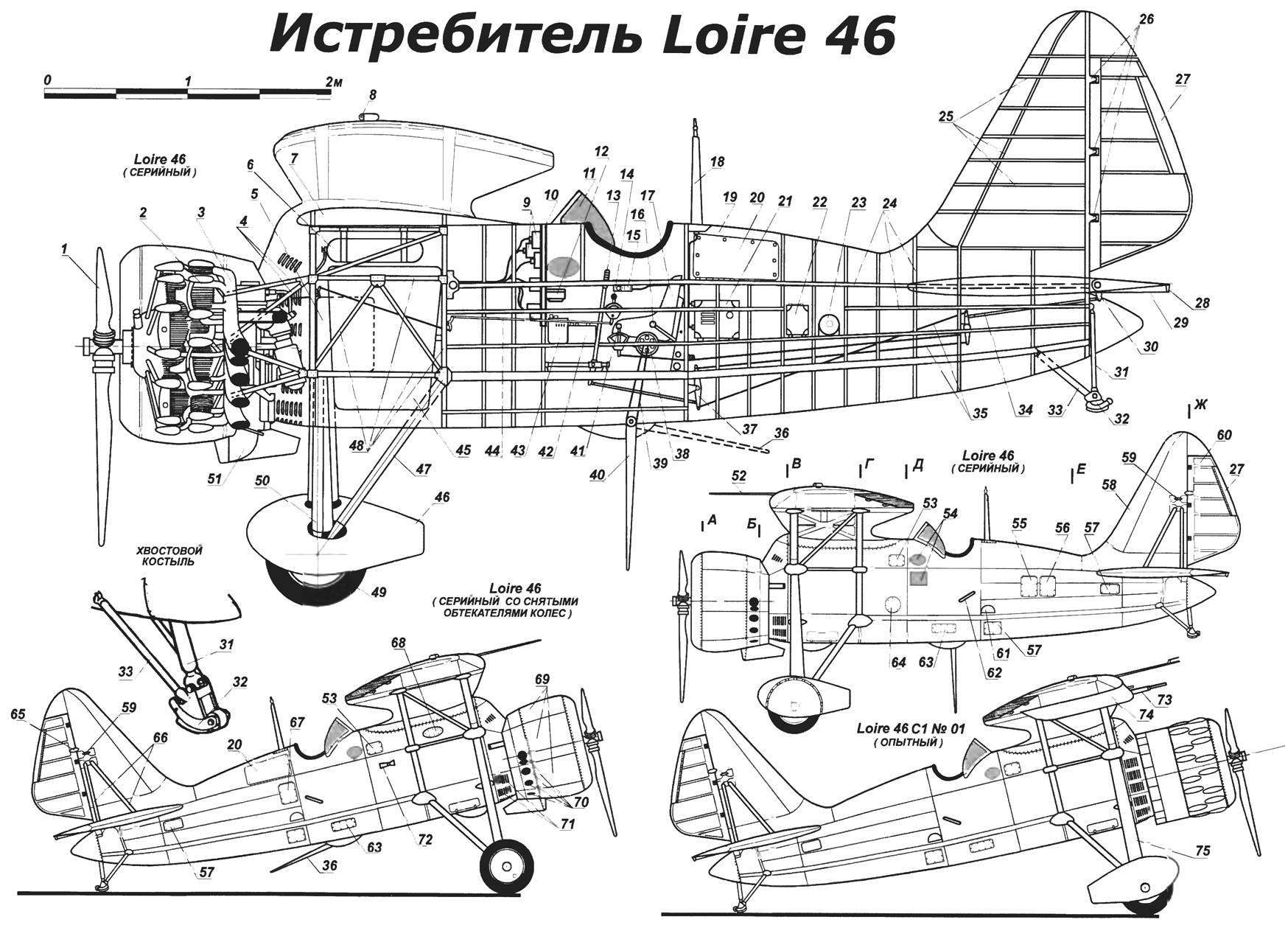 The first prototype of the fighter LOIRE 46
The wing spars had a beam cross-section. The airfoil shaped ribs set at an angle of 60 degrees to the front spar. Sock arm portions formed wing ribs installed strictly according to the flight of the aircraft. The sock of the center section of the wing had no ribs: it consisted of bent duralumin panels. Almost the entire rear edge of outer wing panels held the ailerons are of rectangular shape with weight compensation; each consisted of two independent sections. The power range of the ailerons — dural. Linen lining.
Control ailerons hard, with duralumin rods.
The machine guns installed in the center section of the wing. Access to them, as well as cartridge disks were provided via the removable maintenance access doors in the lower part of the wing.
Each half was reinforced with two struts running from the lower fuselage to the center section. In addition, each strut was based on the front spar of the wing through an additional brace made of steel tubes, which are closed profiled casing.
Tail unit all-metal, dvuhlonzheronnoe scheme. All wheels with the weight compensation. Stabilizer and fin were joined to the fuselage in the locations of the power frames. Control of the rudder cable, Elevator — tough with rods. Rudders and height were equipped with trimmers. The trimmer of the rudder was regulated only on the ground. The Elevator-section. To ensure greater rigidity of the stabilizer and fin are connected by L-shaped strut. The covering of surfaces and fabric.
Landing gear is fixed, tail wheel. Their shock — MILANOVENDEMODA type. The size of the tires of the main chassis 750×150 mm wheels made of magnesium alloy. Brakes drum, pneumatic drive.
The power plant consisted of the engine and also the oil and fuel systems. Engine Gnome-Rhon capacity of 14 Kfs 900 HP was attached to Motorama through rubber grommets to reduce vibration. The motor frame was assembled from steel chrome-molybdenum tubing. Control of supply of air, oil and fuel to the motor auto, corrector Bronzavia. 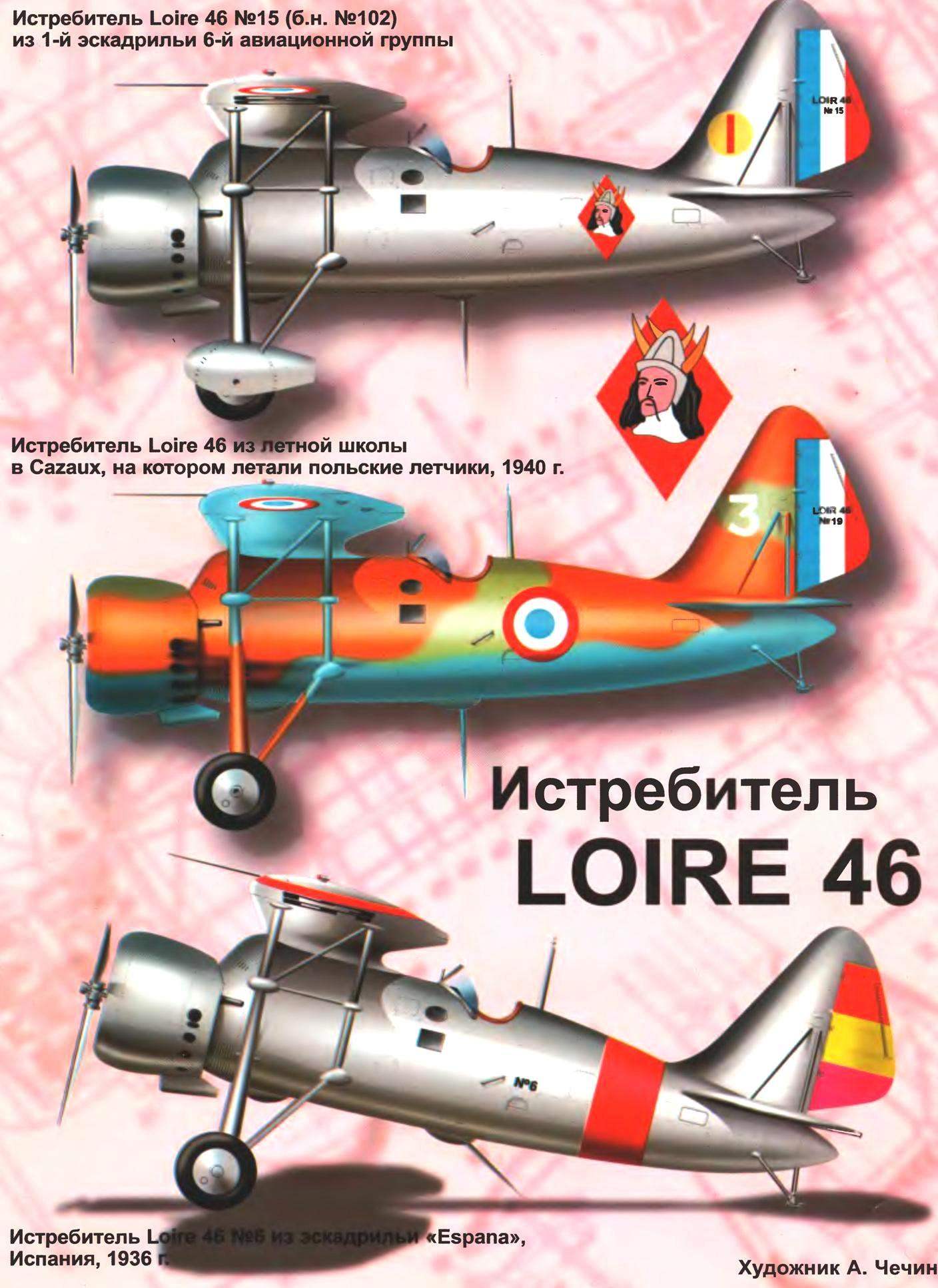 Fuel system includes fuel pumps, piping and sealing the fuel tank with a capacity of 360 liters, installed in the Central fuselage. The oil tank capacity of 44 liters was located in the Central part of the fuselage to the right of the fuel.
Propeller plane, metal, three-bladed, constant pitch firms Gnome-Rhon type 85НЗ series 1440.
Armament consisted of four wing-mounted 7,5-mm machine guns MAC (ammunition — 300 rounds each). The mechanism of recharge of pneumatic guns. On the dashboard was installed crematory sight OPL model 1931. Under the left plane could be suspended from chinafotopress Debrie type 65-V.
The equipment included a set of navigation-flight instruments A. C. D. F. K type 41, Pitot tube, Venturi, compass Vion 31 or Aera DV10, clock and altimeter to 10,000 m. in order To control the operation of the power plant provided for indicating the oil pressure, fuel pressure, oil temperature, pressure, air compressor and fuel consumption.
On Board was the station of Thomson-Ducretet Th.53. The transmitting antenna was fixed on top of the fuselage, behind the cockpit, and the receiving antenna is under the fuselage. During takeoff and landing, the receiving antenna was formed. Antenna position the pilot was monitored by the lighting of lamps removed position.
Flight performance of a fighter Loire 46
Wing span, m……………………………11,830
Length, m………………………………………..7,884
Height, m………………………………………3,015
Wing area, m2………………………..19,50
Engine………………….Gnome-Rhon 14 Kfs
Power, HP…………………………………..900
Empty weight, kg……………………………..1360
Takeoff weight, kg…………………………..1850
Maximum speed, km/h……………390
Time of altitude of 4500 m, min…………6
The maximum range………750
N. Food reserve was, A. CHECHIN