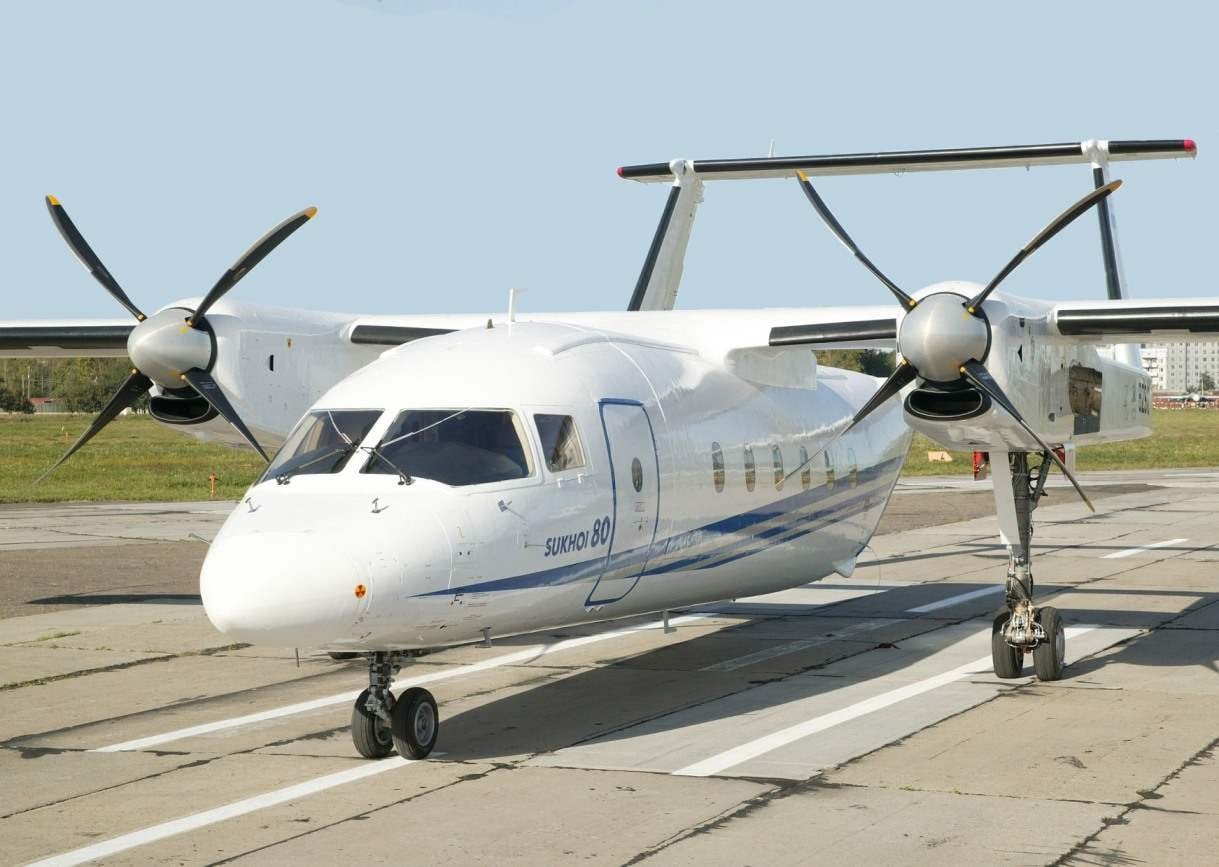 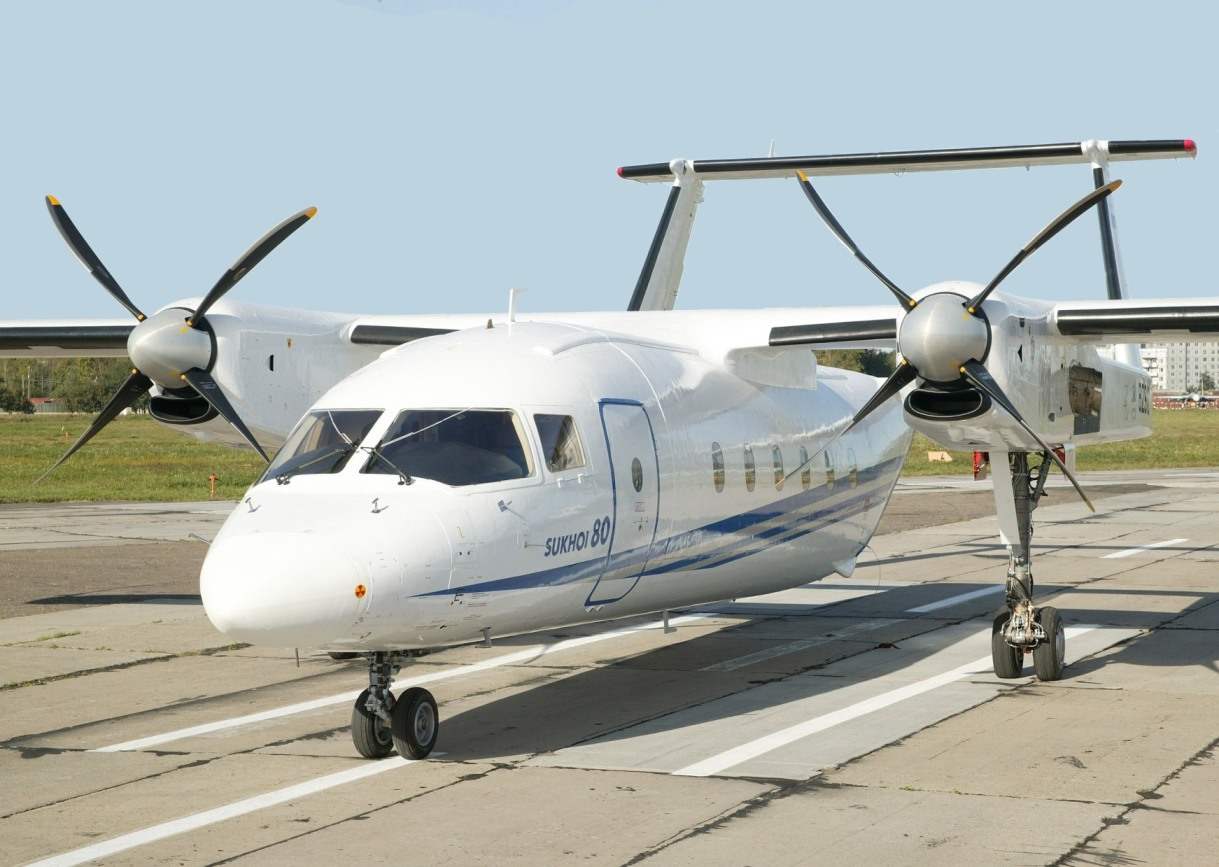 The development of aircraft, initially under the designation C-80 OKB. Sukhoi started at the initiative of M. P. Simonov in the early 1990s in the framework of the conversion of the defense industry. Two years later, finally formed the shape of the aircraft as a high-performance vehicle intended for passenger and cargo transportation on domestic routes and is able to replace the outdated machines of similar purpose. The prototype C-80 with the turbo-propeller engine TVD-1500 was calculated to transport 24 passengers or 2500 kg of cargo. However, the domestic TVD the time is not ripe and had to rely on ST7-9V of the company “General electric” (USA). With them the plane could carry up to 26 passengers or 3,500 kg of cargo.

In 1993, the project became interested in Komsomolsk-on-Amur aircraft production Association (KnAAPO).
The first prototype of the su-80 under the new designation was built in the summer of 2001, and September 4 machine (RA-82911), piloted by test pilot I. Votintseva (the second pilot Yuri Vashchuk) overcame gravity. In the same year, the aircraft shown in the next Moscow aviation salon.
Certification of the su-80 was scheduled for completion in 2003. However, after in-depth study of the market and taking into account the wishes of potential customers decided to increase the passenger carrying capacity of the serial su-80 up to 30 people. For this I had to lengthen the fuselage by 1.45 m and modify the tail. Then it seemed that the aircraft is prepared for a big “life”. For it looked not only airlines, but also the military. Of course, in addition to the cargo-passenger su-80GP worked for troop, medical, fish, exploration, patrol, and other options of the machine. But was considered the basic utility.
The concept of su-80GP was formed by results of marketing researches of the market of aircraft of General aviation in our country and abroad. Analysis of the structure of the fleet of the airlines, the nature and conditions of basing of aircraft, data on typical routes has allowed to identify the main features of the future su-80. It – autonomy and good takeoff and landing characteristics, allowing to exploit the s-80GP short, including unpaved strips unprepared airfields, as well as the convertibility of the base variant of the passenger in the truck and back in minimal time. 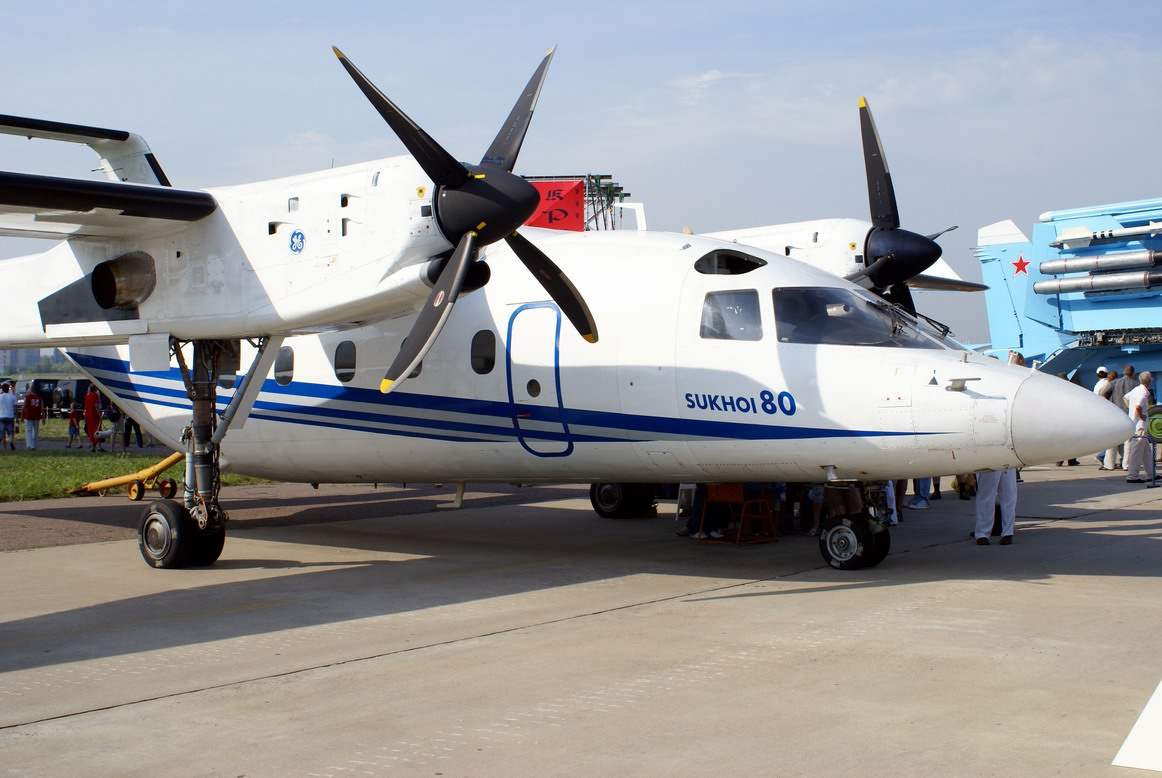 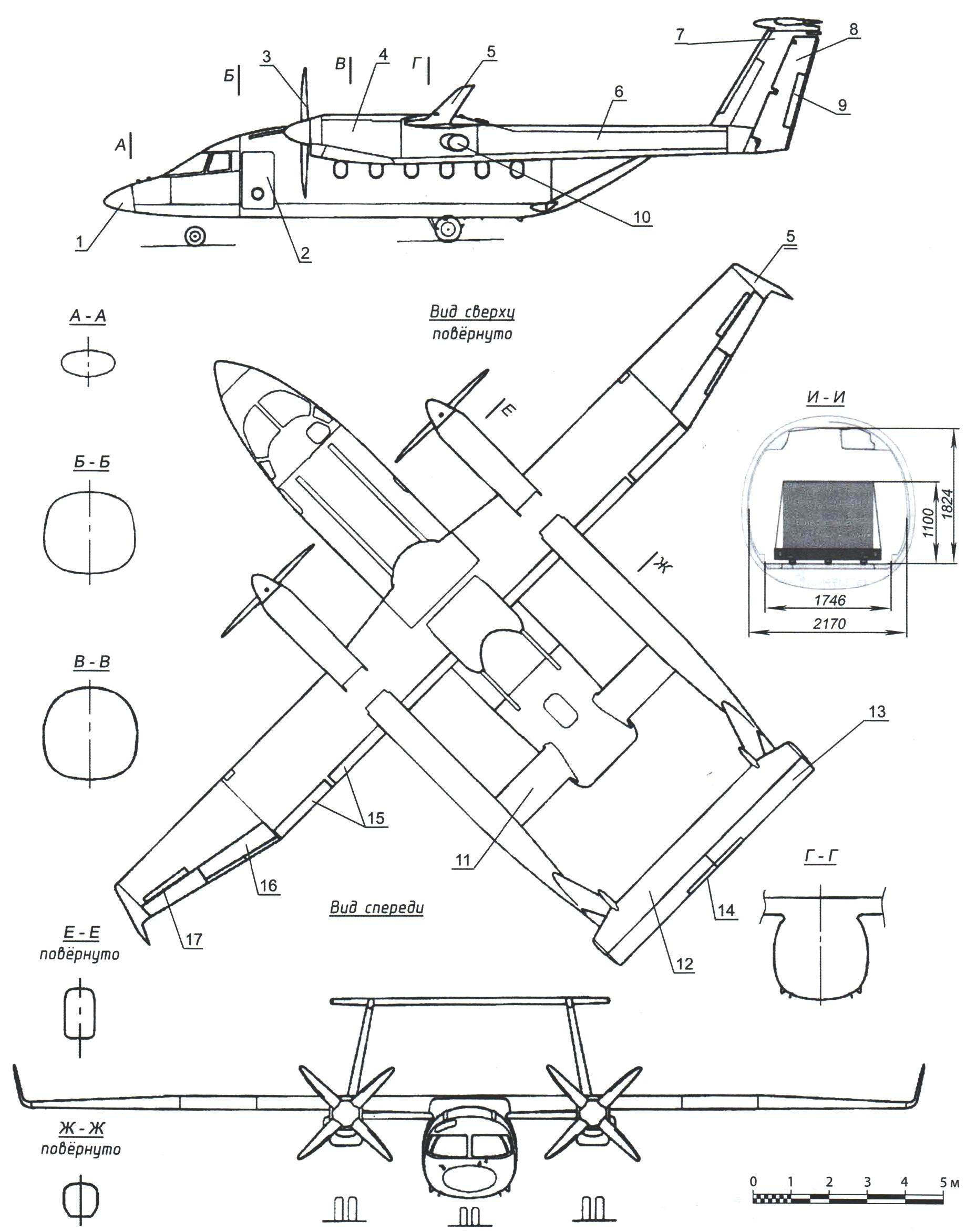 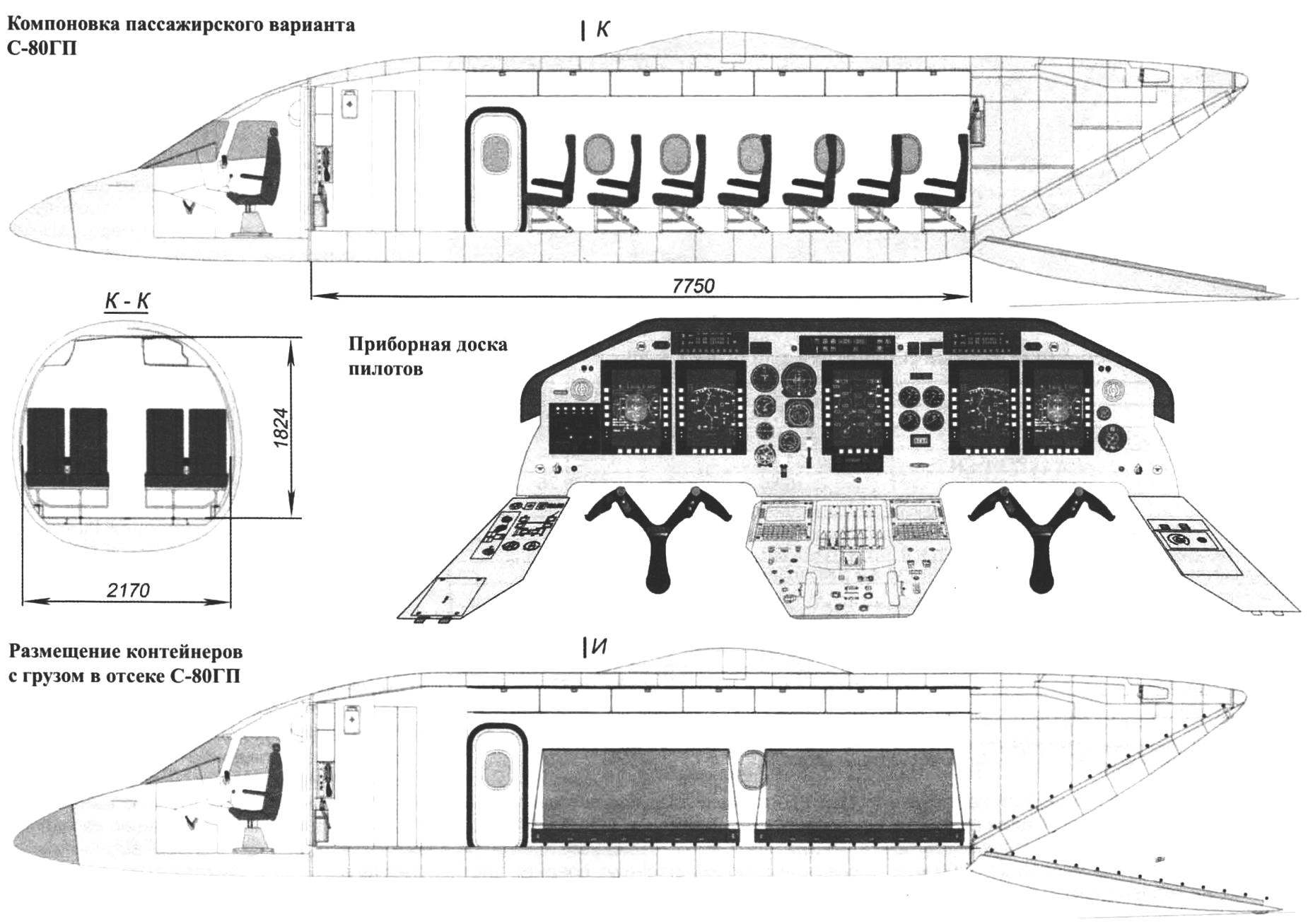 Range – load of 1950 kg-2450 km, since a significant part of the routes of airlines, international flights of Siberia and the Far East are characterized by great length. In the European part of Russia, where the maximum amount of work necessary to the track length of about 400 km, has allowed to make two or three flights without refueling, reducing thereby the complexity of the preparation of the aircraft for a new mission. Attracted low operating costs and high transport efficiency of air transport, and a high level of comfort for passengers, comparable to a common-haul aircraft.
The overall aerodynamic configuration of the aircraft, its powerplant, the strategy of maintenance is designed in such a way as to minimize direct operating costs and thus increase profitability.
The designers put in the car a number of technical solutions for self-deployment and operation, taking into account Russian specifics. Cargo ramp in the rear fuselage, a removable roller tracks, winch allow to mechanize loading and unloading operations. Two-beam scheme aircraft with P-tail allows the forklift or trucks to drive directly to the ramp. This is fine in peacetime, but in a combat situation, especially when driving a car 18 – 19 year olds, it is impossible to exclude serious damage to the tail beam machines.
The motors can operate in the mode of power unit, when inhibited air screw, ensuring the functioning of the systems of the aircraft without being connected to external sources.
The calculations showed that neither pure cargo or pure passenger cars to MVL can’t make a profit. Therefore, the OKB. Dry has developed a convertible version.
For cargo Luggage racks are formed, and passenger seat removed. According to preliminary estimates, the RAID of the combined version of the su-80 will be three times more than a truck, and twice, – the passenger.
The trim after the preparation of its passengers is no different from the usual and the comfort level is as close to the standard for aircraft.
Su-80 is a twin-boom high-wing monoplane. 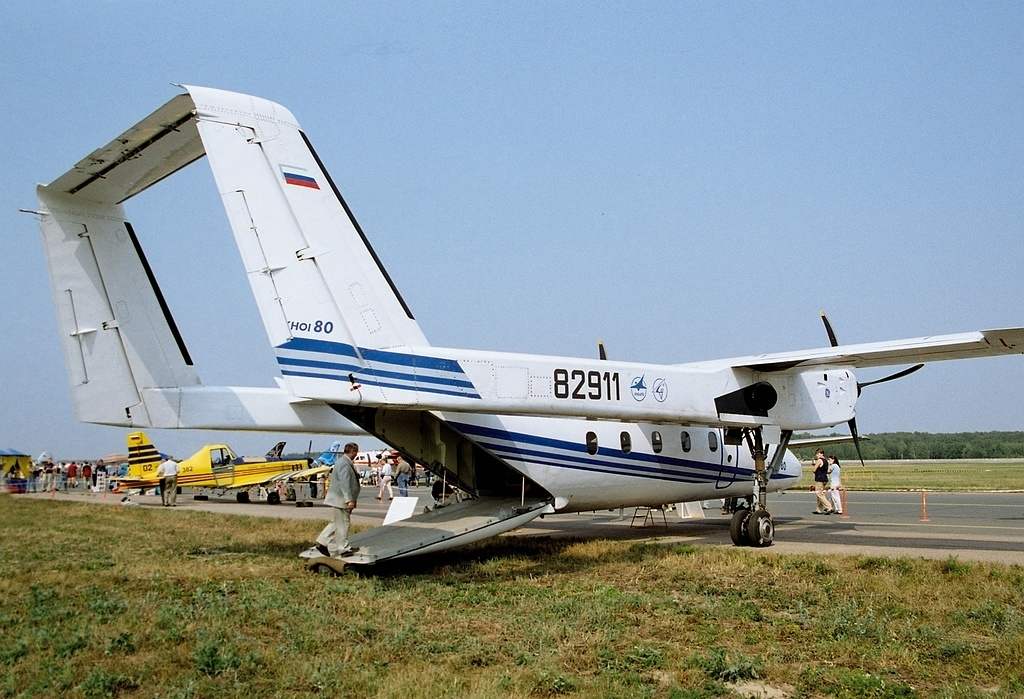 The basic data of a family of aircraft su-80 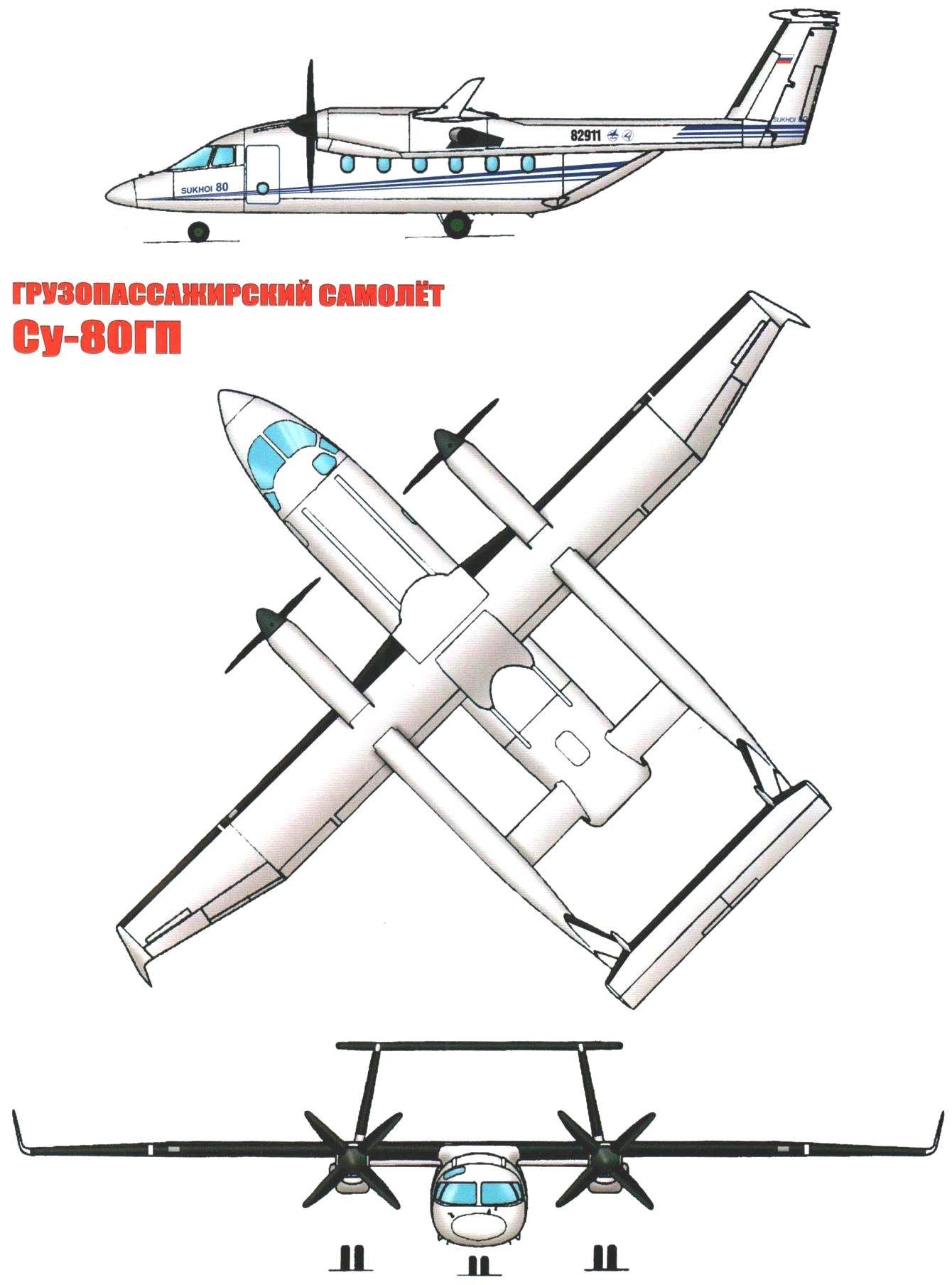 The wing is single-spar, caisson type. Consists of a center section, two end portions and tips of the wings “Whitcomb”, reducing the inductive component of the aerodynamic drag of the bearing surface. The profile of the wing P-273, the relative thickness of 16% in the center section and 12% in the end section, the wing setting angle 2°.
On the wing is installed odnoschelevye three-section Fowler flaps made from composite materials, and the Aileron trimmer and servo tab. At the end parts of the wing are flaps automatic control of the roll. In the caisson of the center section contains the main fuel and service tanks. The refueling aircraft is possible both centralized and distributed way.
The beams are placed turboprop engines, the main landing gear and the aircraft equipment systems. The boarding of passengers and loading and unloading operations are carried out on the cargo ramp in the rear fuselage.
The fuselage is a metal monocoque. The cabin is designed to carry 30 passengers on 2+2 or cargo weighing up to 3,300 kg and is equipped with a wardrobe, a toilet, Luggage racks and alarm outputs in accordance with AP-25 norms and FАR-25.
The cargo ramp is hinged on the last frame of the power middle part of the fuselage. The tail pylon has a traditional design. Rudders and height are equipped with trimmers and a servo tab.
Tricycle, retractable landing gear in flight consists of nose and main landing. First – polurychazhnogo type with a non-braking driven wheels. Main stand – arm-type with external cushioning device. Nose strut retracts forward, main backward in the beam. Tyres all wheels are tubeless, designed for a long service life. Fold the niches of the chassis is made of composite materials.
The aircraft was fitted with modern navigation equipment. Su-80GP (RA-82912) built in the summer of 2005, and on 29 June he made the first flight. In the same year it was exhibited at MAKS-2005. For certification testing, which was scheduled to begin in September 2006, we built another machine (serial No. 01-06), and in the first quarter of 2008 he had to obtain the relevant document.
Soon, however, everything changed. KnAAPO, despite the interest in the su-80 airlines, connected to the aircraft program RRJ, turning the production of the aircraft.
Thus the management of the KnAAPO, in the hope of reproducing the program of the su-80 mothballed the second prototype machine. But airlines and military were forced to continue operating veterans An-24 and An-26 up to the full development of their resource.
N. VASILIEV