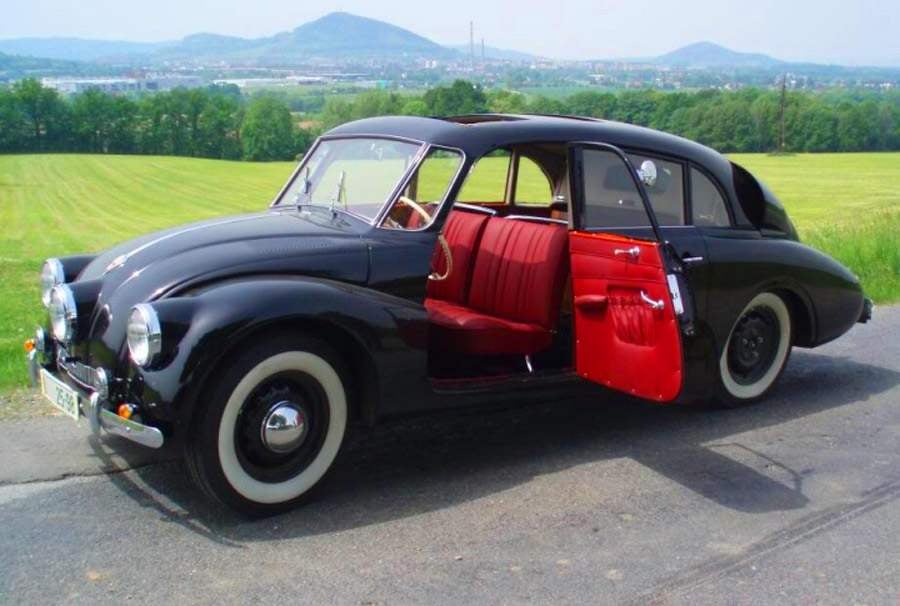 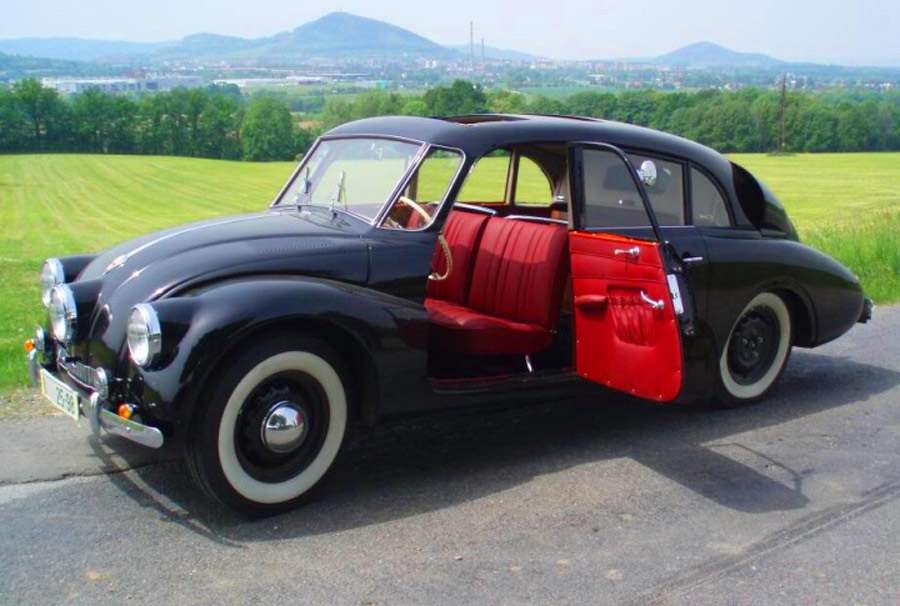 Czechoslovakian Tatra-87. The speed of the first car was small, but it seemed like the drivers exciting. However, over time they got a taste of driving fast and have begun to demand from automotive companies all more than the speed of the machine. Designers have increased the capacity and power of engines, reduced friction loss, improved suspension, but soon realized that there is a physical limit to the growth rate of the car.

Almost the same problem was faced by aircraft designers trying to squeeze out of the aircraft, burdened with struts, braces and fixed landing gear, a dozen of kilometres per hour because of combat aircraft, their aerodynamic excellence means much more than for cars. That is why the work to create aircraft were connected scientists-aerodynamics who discovered the relationship between the geometric shape of the body and the forces generated by the flow of air flow.
Following the achievements of aviators aerodynamics started to use and the designers of cars. Soon the market began to appear the first “aerodynamic” car, but the public, accustomed to the coaches, cabs, carts, gigs, gigs, cab and cabs, with distrust met the first cars with a body a streamlined shape.
In particular, very interesting was the fate of “aerodynamic” car of the Chrysler Airflow. Created in the early 1930-ies, this car has a streamlined shape, the waste in light of the numerous purges of models in a wind tunnel, and developed a speed of 145 km/h, which for the time was quite good. However, buyers were reluctant to purchase the streamlined Chrysler, and the commercial success of this car received only when the body has become traditional lines. 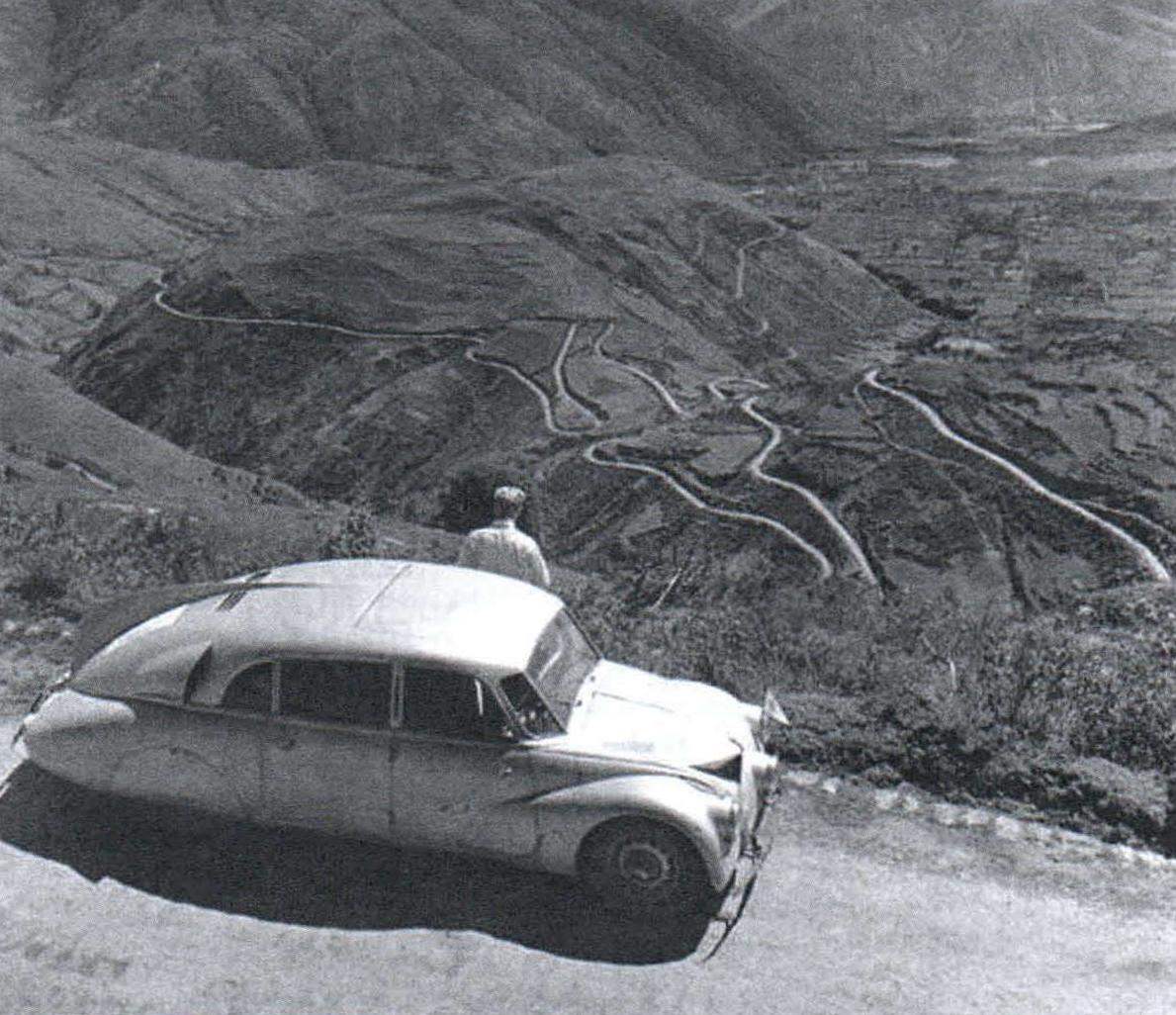 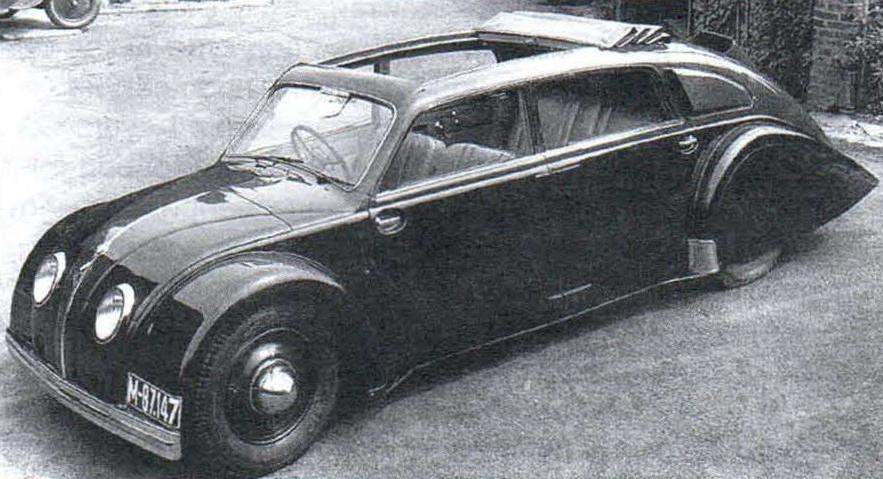 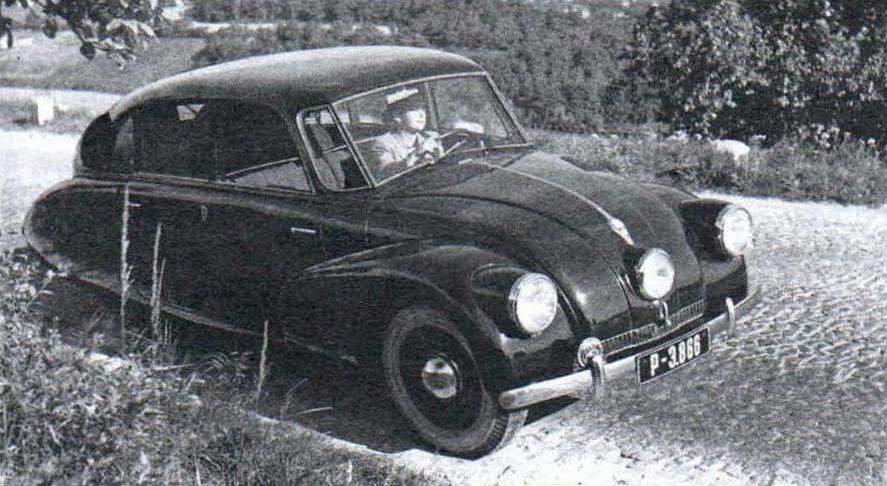 Tatra 87 issue 1937
Much more successful was the fate of the Czech “aerodynamic” car Tatra-87 and its predecessor, the Tatra 77, the created by the company Tatra in the town of Kopřivnice (until 1921 – Nesseldorfer Wagenbau Fabriks) with the participation of the chief designer of the plant Hans Ledwinka. This is he belonged to the idea of the original chassis design with a Central beam-pipe, perceiving as the bending and torsional moments. The same chassis is still used on heavy trucks.
Car Таtrа-77 was presented to the public on March 5, 1934 at Prague Motorshow. It was a rear-engined car with the original 8-cylinder V-engine air-cooled; cylinder capacity of the engine was 3.5 liters. the Machine had some disadvantages, so its serial production in full extent and has not been deployed.
More sophisticated were the “aerodynamic” car, dubbed Таtrа-87 – it is also created with the participation of Hans Ledwinka, and its lead designer was Rudolf Ubelacker.
Like its predecessor, the new machine was powered by a V-shaped 8-cylinder air-cooled engine, with a camber of cylinders of 90 degrees, and also located on the back. Cylinder capacity was slightly less than the previous model – 2,96 l, but the capacity increased from 60 to 75 HP Maximum speed car with a body a streamlined shape reached 160 km/h. 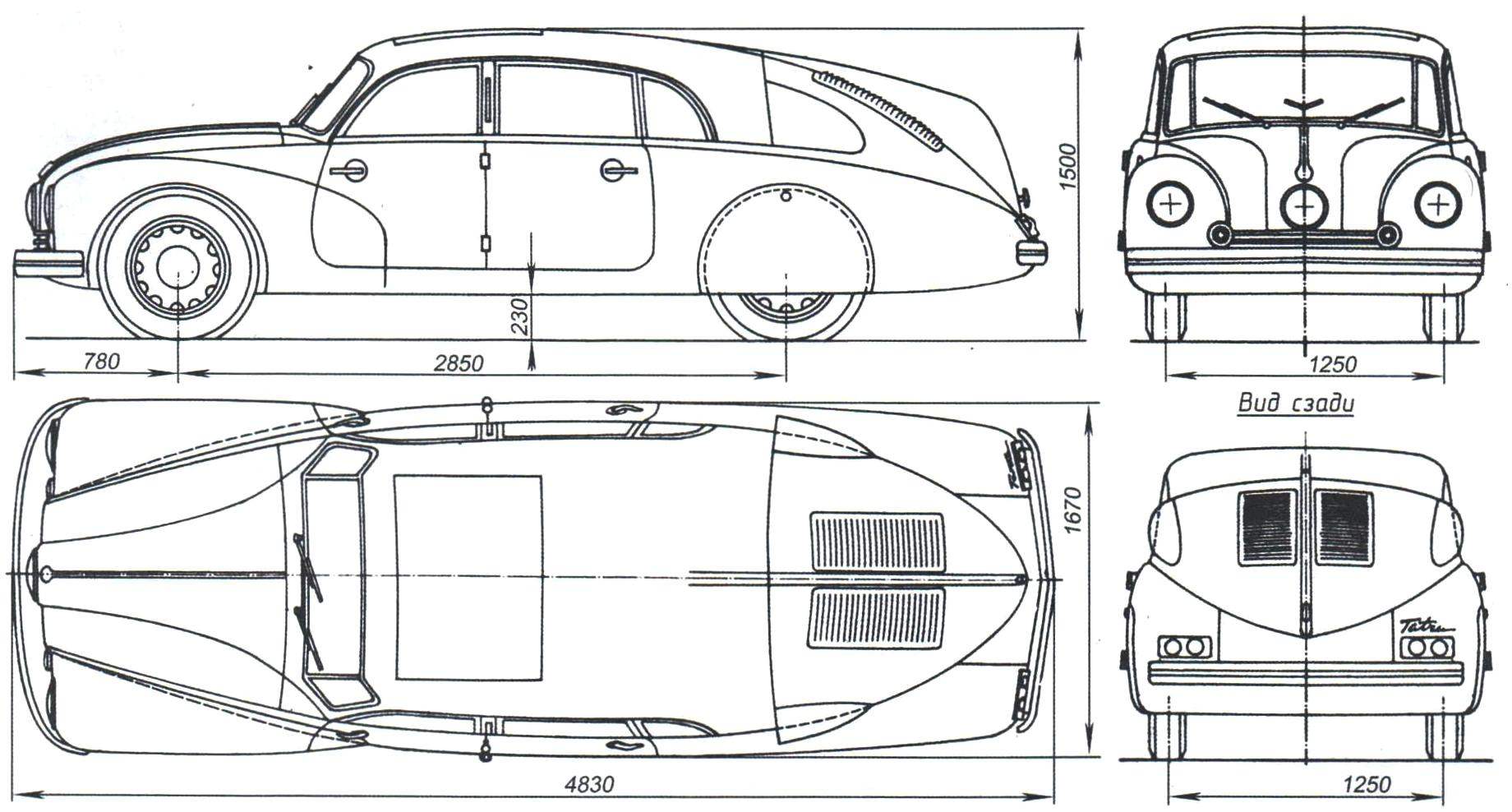 Geometry and basic dimensions of the car Tatra-87 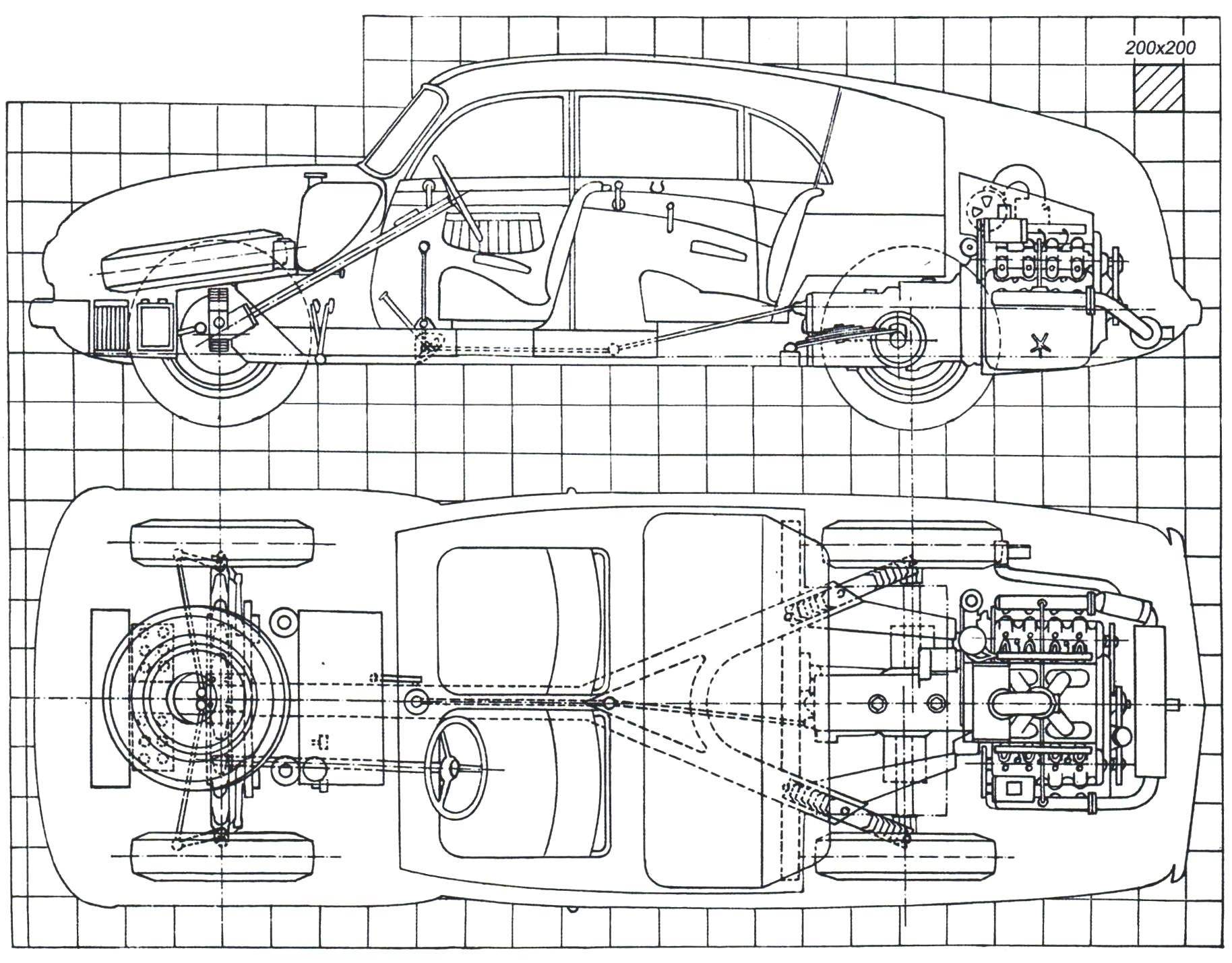 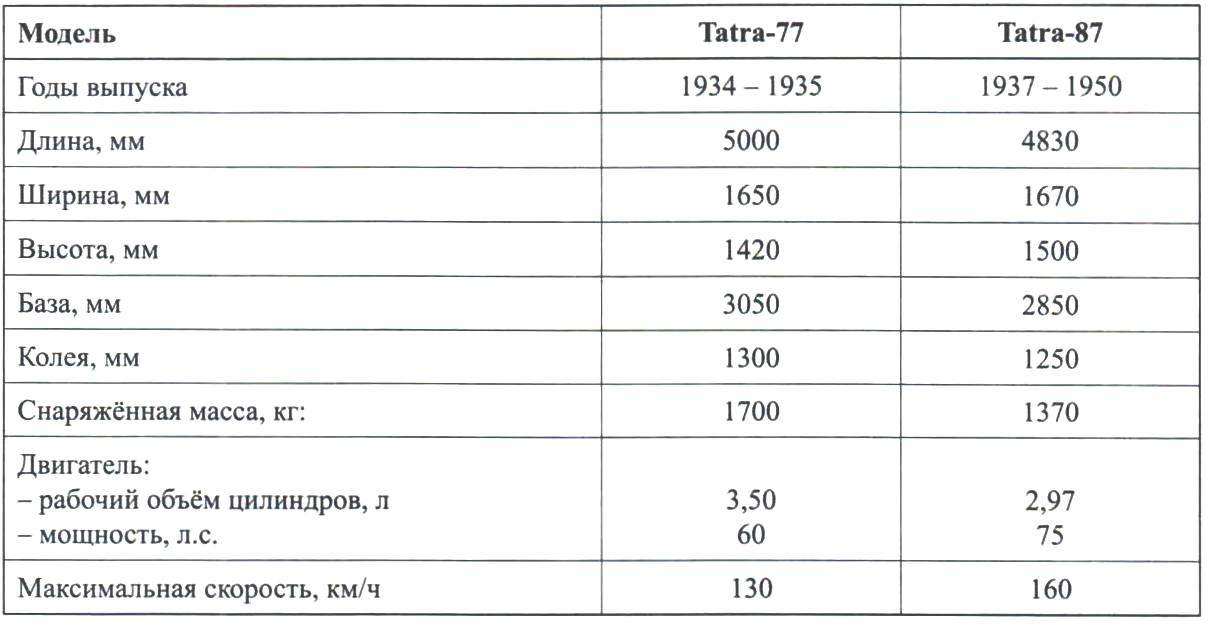 Technical characteristics of the “aerodynamic” cars Tatra-Tatra 77 and 87 and
Cylinder head engine – aluminum with hemispherical combustion chambers. Carter – cast, magnesium (by the way, for the first time in the world!) alloy. The intake and exhaust valves located in the cylinder heads and operated pusher rods. Himself camshaft connected to the crankshaft of the motor Bush roller chain.
Separate cast iron cylinders had chiseled edges that reduces the weight of the engine and improve cooling. The air to the cylinders was supplied by two centrifugal fans. In addition, the motor was cooled using the installed in the front of the car cooler.
Powertrain, suspension and transmission was a single unit, attached to the body by three rubber mounts. If necessary, the prevention or repair of the whole unit is easily rolled out from under the car.
Another feature of the “Tatra 87” was a system of centralized lubrication chassis when pressing on the pedal grease was applied to the joints of the front suspension, steering, axles, pedals, bushings springs and actuator linkage mechanism.
The car, however, had a blemish that spoil it somewhat, mostly spotless reputation.
The fact that the weight distribution of the machine along the axes looked like 34×66, that is to the front wheels accounted for 34% of the total load, and the rear is 66%. This led to the fact that on a slippery or even wet road the car had oversteer.
To get rid of this unpleasant quality, designers had to reduce the wheelbase-2850 mm, weight Таtrа-87 to 1370 kg and, most importantly, significantly change the suspension the wheels. So, front suspension type “swinging axis” with a transverse leaf spring was replaced by two flags one above the other transverse leaf springs, the ends of which simultaneously performs the function of the cross levers. In the rear suspension instead of one cross-spring over suspension installed a pair of springs located at an angle to the longitudinal axis of the vehicle. With one end of each of the springs has been associated with the axle shaft and the other fixed in the base body. In this arrangement, the suspension rear wheel on the turns could be pulled up, thus preventing the incipient skid. 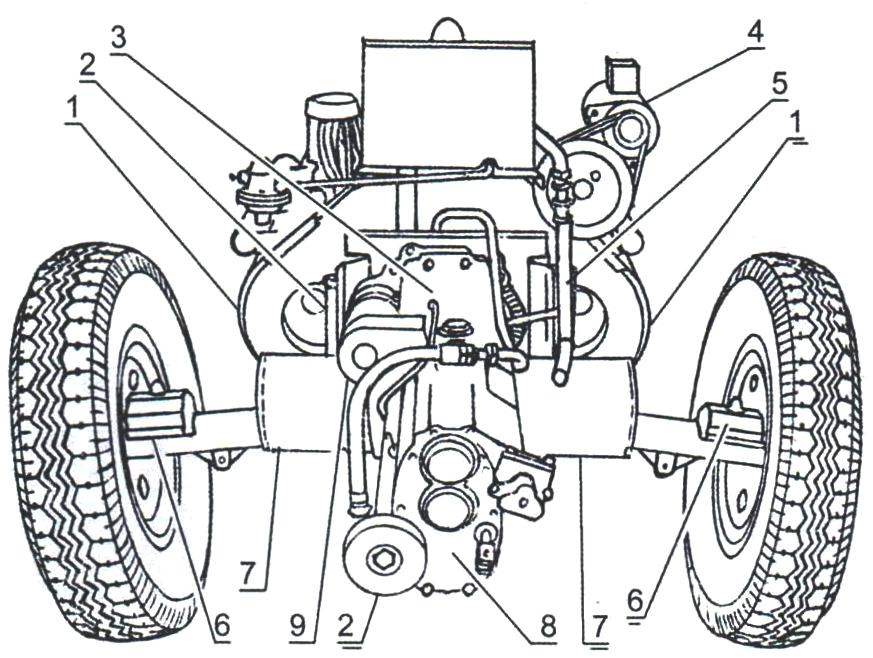 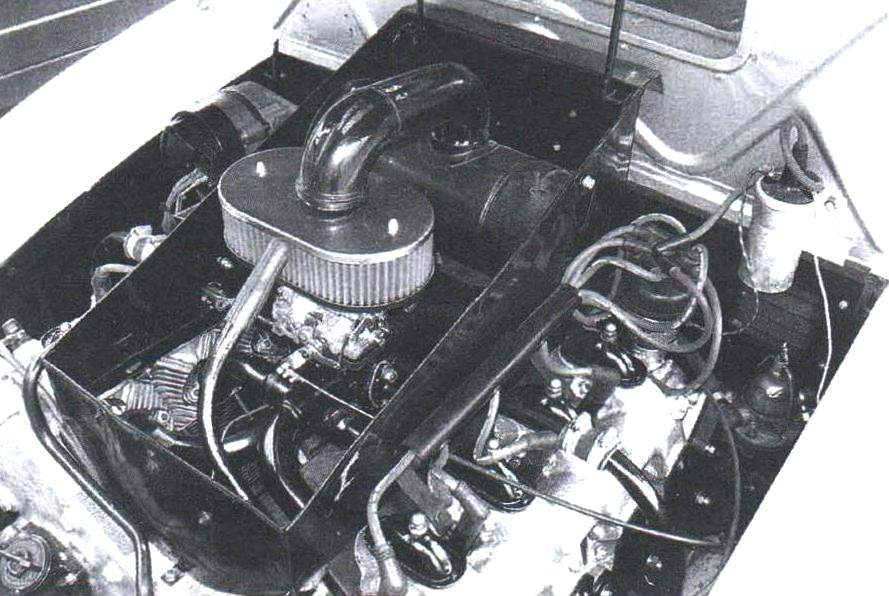 The engine compartment in the rear of the car 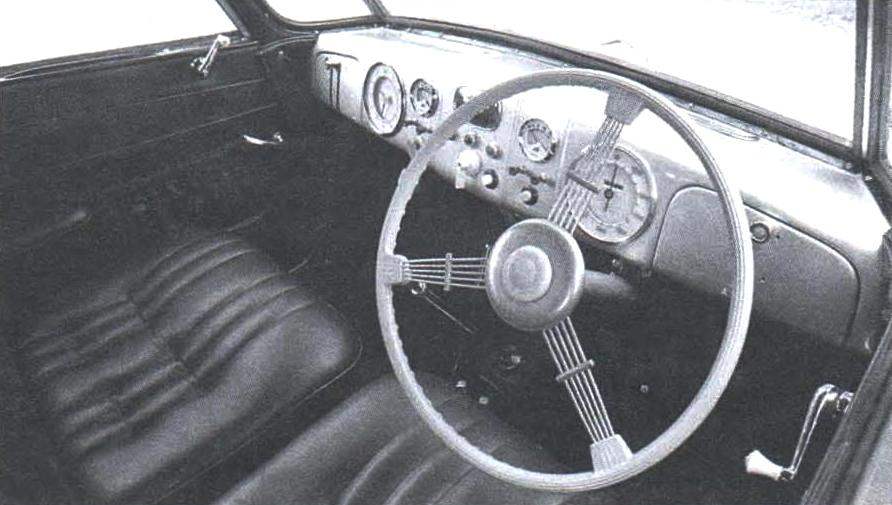 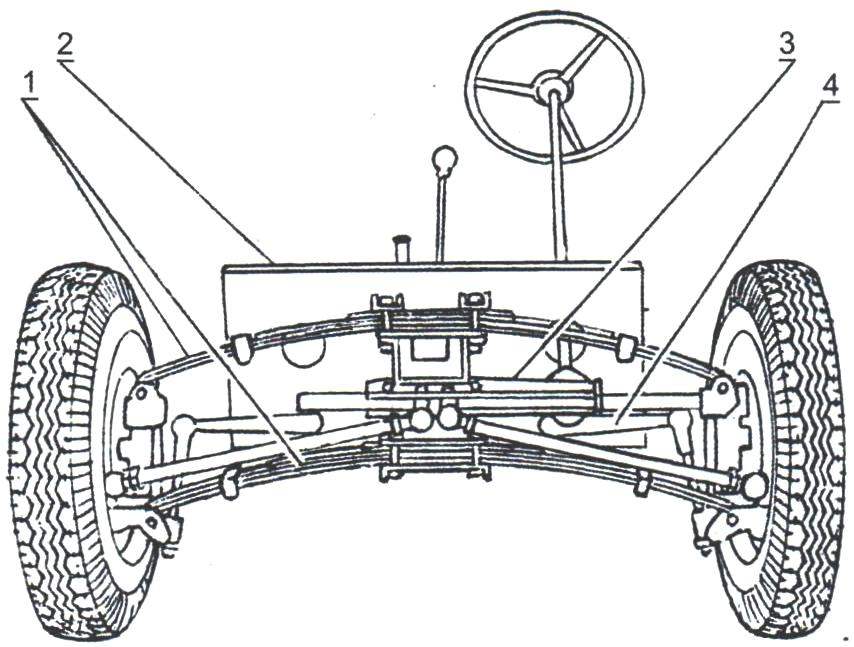 Front suspension and steering mechanism of the vehicle Таtrа-87:
1 – spring; 2 – scutellum; 3 – rack & pinion steering; 4 – absorber
But the main thing that distinguishes the Tatra among other cars – the layout and design. First of all, the designers abandoned the tubular longitudinal beams – “eighty-seventh” became the world’s first passenger car with a monocoque body. The engine is positioned longitudinally in the rear overhang. The main transfer took place between the two shaft gearbox and clutch mechanism.
Of course, in the design of this car had a lot of revolutionary solutions, however, to admire them, the car would have to disassemble. Well, on the street, in traffic flows, it was recognized immediately. First of all, the eye three lights, and Central function as a floodlight. Unusually good and the windshield – it is, like on modern cars, it was panoramic, but consisted of three flat elements -a Central and two lateral. But most of all surprised located at the rear of the keel that improves the longitudinal stability of the vehicle at high speeds. Yes, and the streamlined body teardrop shape on the background of the angular cars of the time seemed like a scene from a science fiction movie. By the way, blowing in the wind tunnel showed that the drag coefficient is only 0.36, which was significantly less than that of the car-“classmates” of the time.
Tatra-87 has gained a truly worldwide popularity. The reason for this was not only a futuristic appearance and outstanding technical characteristics, but also travels on her test engineers of the company Tatra, Jiri and Miroslav Hanzelka Zikmund. They, being the students of the technical school, met in 1938 in Prague. United by their shared passion – travel. The outbreak of the Second world war delayed the realization of this dream indefinitely, but the young dreamers, gift of time did not lose -they developed routes for future journeys and taught foreign languages. So, Zikmund learned English, French, Russian, Spanish, German and Arabic, and Hanzelka – Swahili, which is spoken almost all of Africa.
Their work at the company Tatra considerably closer to the long-standing plans for long journeys. Hanzelka and Zikmund suggested that the plant’s management to organize an advertising expedition to the Tatra-87 – first to Africa and South America. As you can see, the young engineers were convincing enough, but their arguments are significant and reasonably, as General Director of the enterprise after much deliberation, decided to allocate for this campaign a lot of money.
During the first series of journeys, which lasted from 1947 to 1950, Zikmund and Hanzelka crossed by car the African continent and Central America. Unusual car everywhere aroused the interest. She is well behaved on dirt roads, easily overcame Brody, the move took sandy climbs. Of course, during the trip happened and breakage, however, the simple design of the machine allowed to repair it right away. 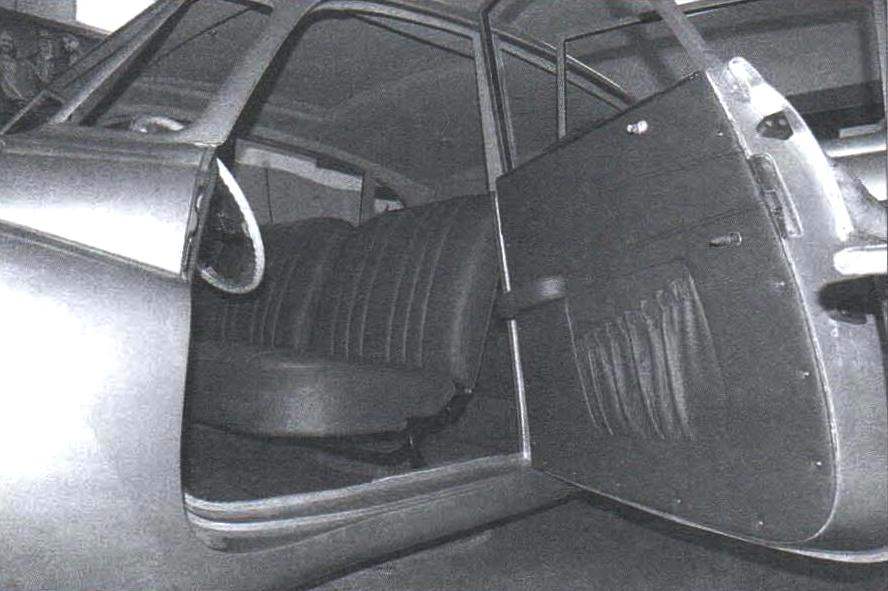 The front of the cabin 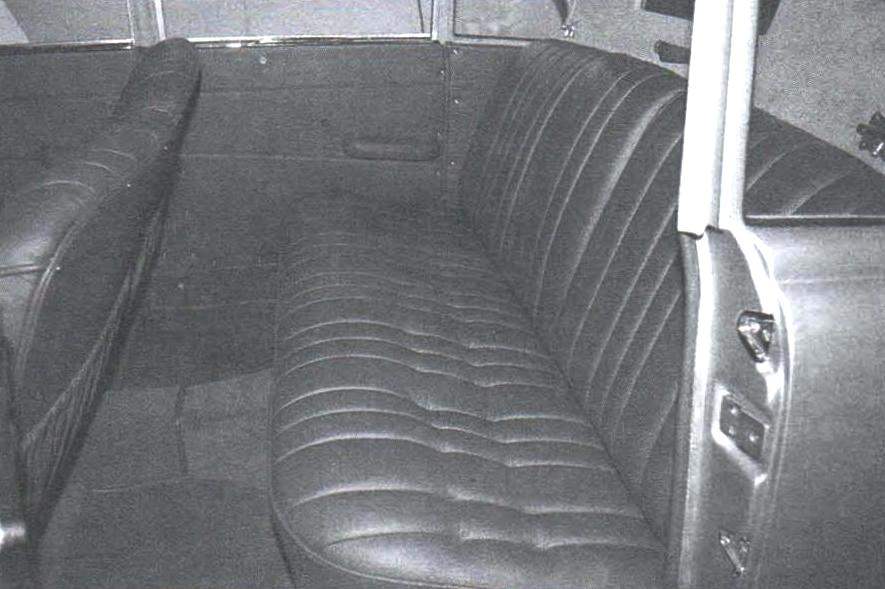 The rear of the cabin 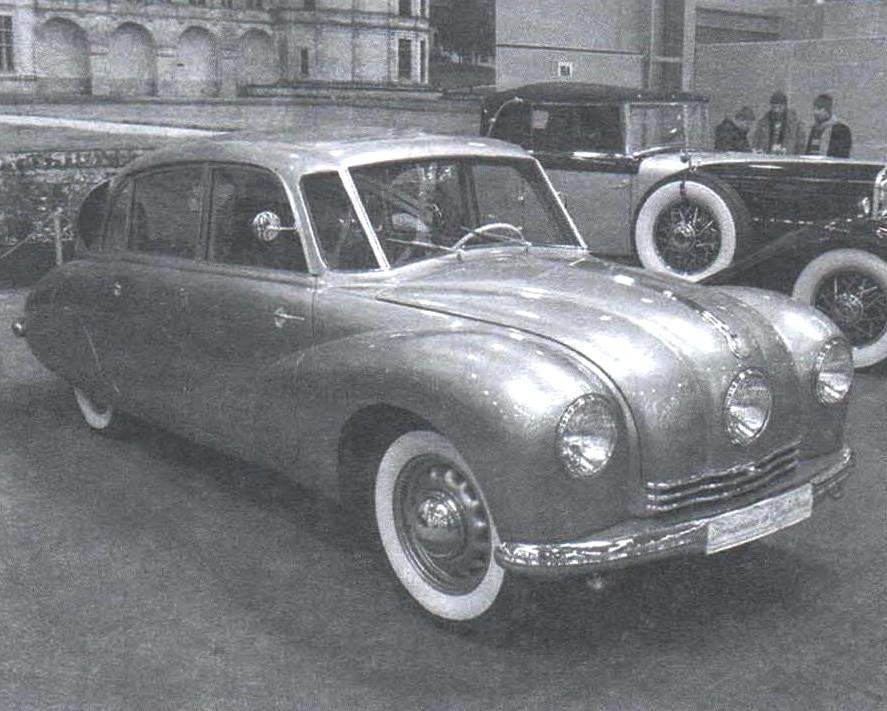 Таtra-87 late 1940-ies. Unlike earlier models. its headlights were recessed into the fenders and hood 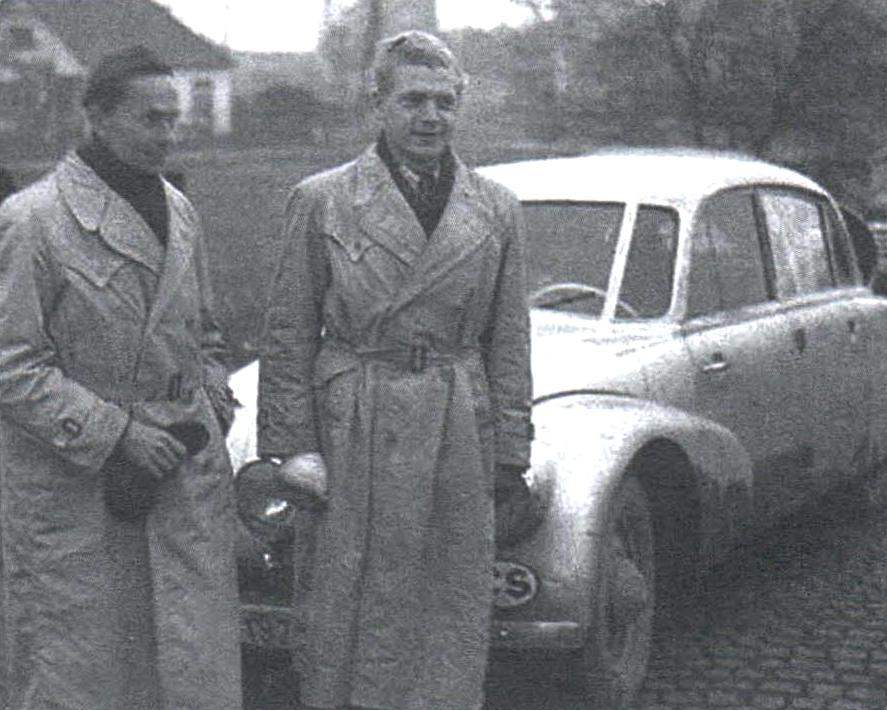 The famous Czech travellers Hanzelka I. and M. Zikmund
The second series of journeys began in 1959 and lasted almost five years. In the course of Hanzelka Jiri and Miroslav Zikmund travelled Turkey, Iraq, India, China, Korea and Japan. And in September 1963 sailed from Japan to Vladivostok and then on their own until the winter of 1964, crossed almost the entire Soviet Union and returned to Czechoslovakia.
During the expeditions of Hanzelka Jiri and Miroslav Zikmund has written several books and made hundreds of stories, took thousands of photos and several documentary films.
Таtrа-87 went off the Assembly line until 1950. Despite their outstanding quality, vehicles has released relatively little over 11 years, only 3140 machines. The reason was the high price of the machine, due to its high level of comfort. Take a radio with automatic tuning to certain frequencies of broadcasting – and it is for the 1940-ies!
Unusual cars sold in many countries of the world, about 30 copies Таtrа-87 were in the USSR. According to the collectors, in Moscow in private hands is about ten of these wonderful rarities of the sample in 1939.
Igor EVSTRATOV