The proposed model is a vivid example of technical creativity of Moscow’s leading athletes-taketomo-delicto that three years in a row became Champions of Russia in this category of high-rise models. One of the athletes — M. Stepanov, who won last year. Our story — about the design of his sports equipment.

The model is a two — step motors total impulse 5 Not. The first stage is equipped with engine pulse of 0.6—0.8 is Not. This model gives MRD initial acceleration and raises it to a height of 15-20 m. It is at this altitude occur the stages separation and the “hot” ignition of the engine of the second stage pulse 4.2 to 4.4 NS.

The case of the first stage length 220 mm formed on the mandrel with a diameter of 30 mm in two layers of fiberglass with a thickness of 0.25 mm. In the lower part glued two balsa bulkhead thickness respectively of 3 and 4 mm, which is a fiberglass tube inner diameter of 10.1 mm — motor container with a length of 30 mm. Outside, at a distance of 20 mm from the lower edge are bound with a wire pin-latch locking MRD from unintentional shooting. In the upper end of the container to first-stage engine glued the balsa plug, in which is fixed one end of ognevaya, the other end through the plug glued into the upper part of the body. Agnesod is a tube of carbon fiber with a diameter of 4 mm and a length of 183 mm.
Three stabiliser carved from balsa plates with thickness of 0.5 mm. the lateral surface is reinforced with fiberglass. To the housing, the stabilizers are attached at the butt with epoxy. 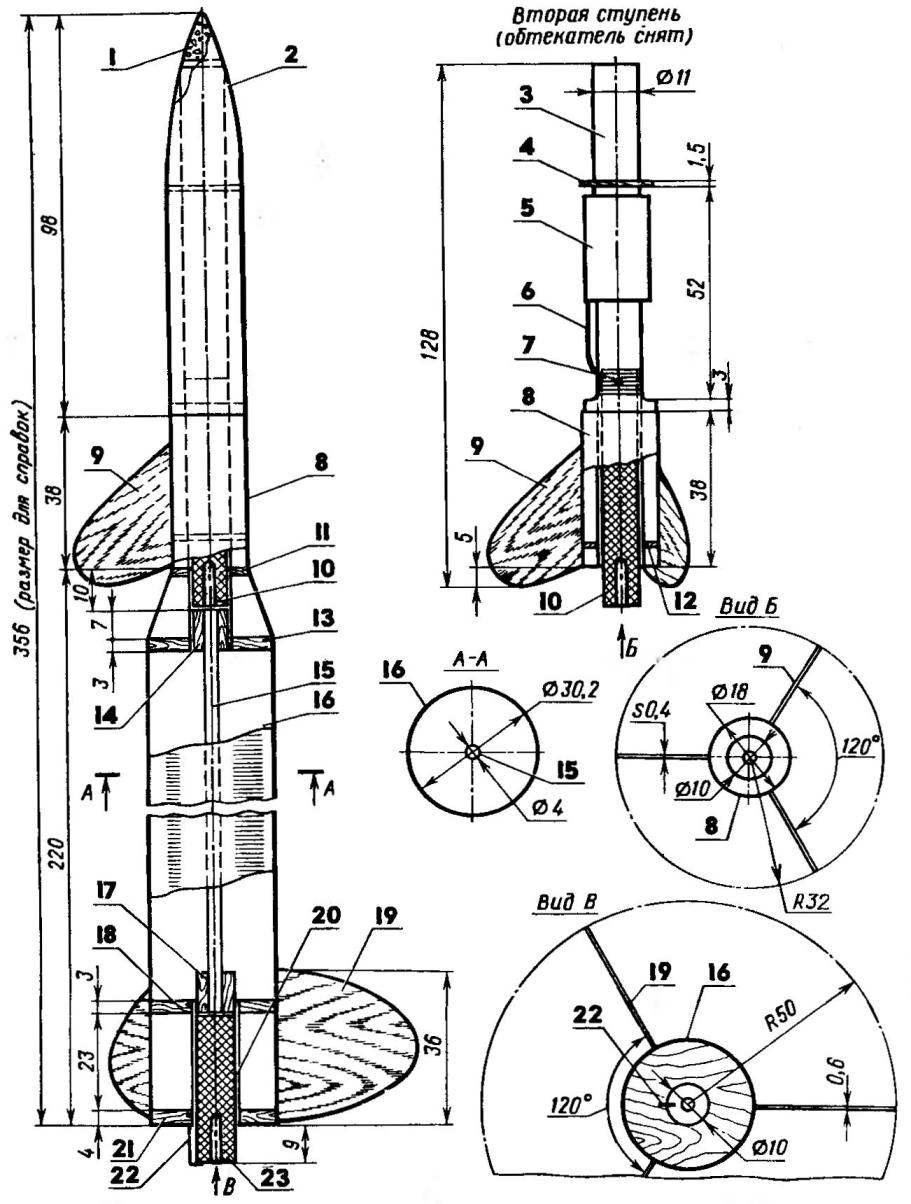 A model rocket class S1B champion Stepanova:
1 — ballast (download), 2 — cone head, 3 — tube (container MRD the second step), 4 — frame, 5 — tape brake of the second stage, 6 — elastic damper, 7 — pin fixation MRD, 8 — piece second stage 9 — the stabilizer of the second stage, 10 — MRD the second step, 11 — frame support upper 12 — ring locking, 13 — frame top power 14 plug top, 15 — tube-ognevo, 16 — the case of the first stage, 17 — plug container, 18 — frame power bottom, 19 — stabilizer of the first level, 20 container MRD first stage, 21 — the frame reference of the lower, 22 — retainer MRD, 23 — engine first stage.
The upper part of the body is a cone with a length of 17 mm, where the glued two balsa-o frame — base and the retainer. Inside, they fixed a fiberglass tube inner diameter of 10.1 mm and a length of 20 mm, which serves as a mounting bushing for the MRD the second step. The mass of the first stage without engine — 8 g.
The second stage is made of two elements: a shortened body and an elongated head fairing. The housing is a tube with a length of 38 mm, formed of four layers of fiberglass with a thickness of 0.25 mm. it pasted another tube internal diameter 10.1 mm and length of 123 mm, which is a container of MRD the second step. The middle part of the container with two holes for pin fixing engine reinforced by winding glass strands. Here, fixed the Kevlar thread to rubber-shock absorber. A little higher, to the frame, fit the brake band of the recovery system of the second stage.
The stabilizers of the second stage of thickness 0.4 mm is molded from Pletka and have ellipsoidal shape. To the body they are attached back to back.
Fairing — arched form, made of four layers of fiberglass. Outside it is covered with parquet lacquer and polished. “Top” of his slightly weighted — filled inside with epoxy resin. There also pasted thread mounting rubber-damper. The mass of the second stage without an engine and rescue system — 12 g.
At the start of the last season designer Mikhail Stepanov has used two combinations of engines designed by I. Taborskeho. First flight: the first stage of 0.8 NS, the second is 4.2 NS; second flight: 0.6 and Not the 4.4, respectively.
Model to start cooking in this sequence. In the first step insert the engine without retarder and fix the wire with a pin to prevent unintentional shooting. Then establish into place the second stage engine and attach it with a locking pin passing through the reinforced portion of the container. The lower part of the MRD (skirt) length 10 mm remains free. In the middle part of the container is wound brake band length of about 3 m, attached to elastic. After put on fairing.
Connect stage due to the tight fit of the skirt MRD the second step in the sleeve housing of the first stage. While the bottom part (end) of the engine is mounted on the upper stub ognevaya. At both ends of the tube-ognevaya to reliably transmit a firing pulse lay three to five grains of gunpowder.
Starts the model with a gasdynamic installation. At the height of 15-20 m is a division of stages: the first lands and the second acceleration goes up. Once triggered expelling charge MRD the second step, is separated from the body, but flies NV (retained by the absorber) fairing. Reveals brake band, and the model falls to the ground.
Our spec. Q.
V. ROZHKOV