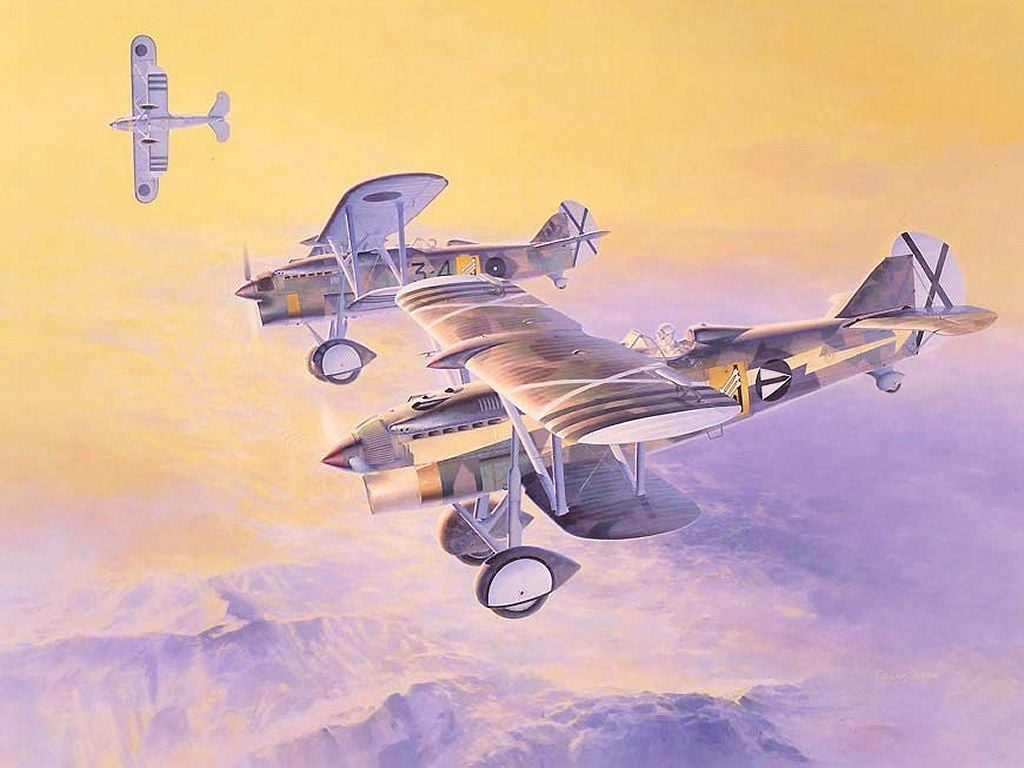 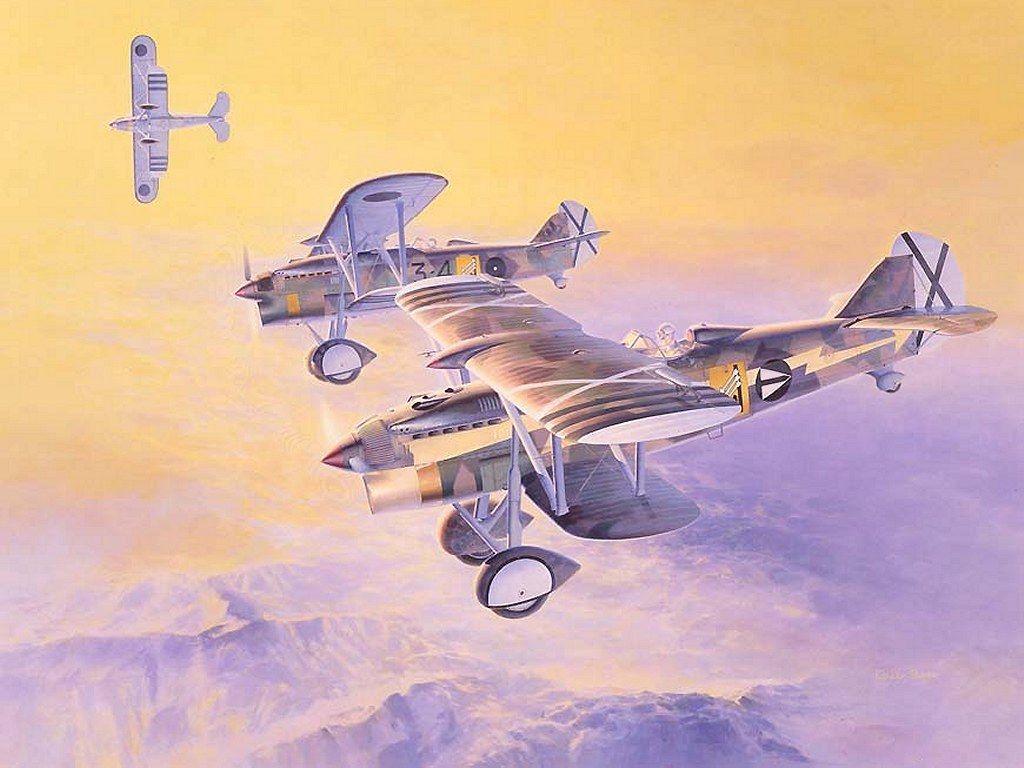 Fighter FIAT CR-32. The plane, which will be discussed, for the five years preceding the Second world war, was a symbol of Italian fighter aircraft. Small, nimble, he observed the conflicts that arose in South America, in China, in Africa, in the middle East. And in Europe is also not without “Italian fighter”—so in most cases called FIAT CR-32 in various countries around the world. 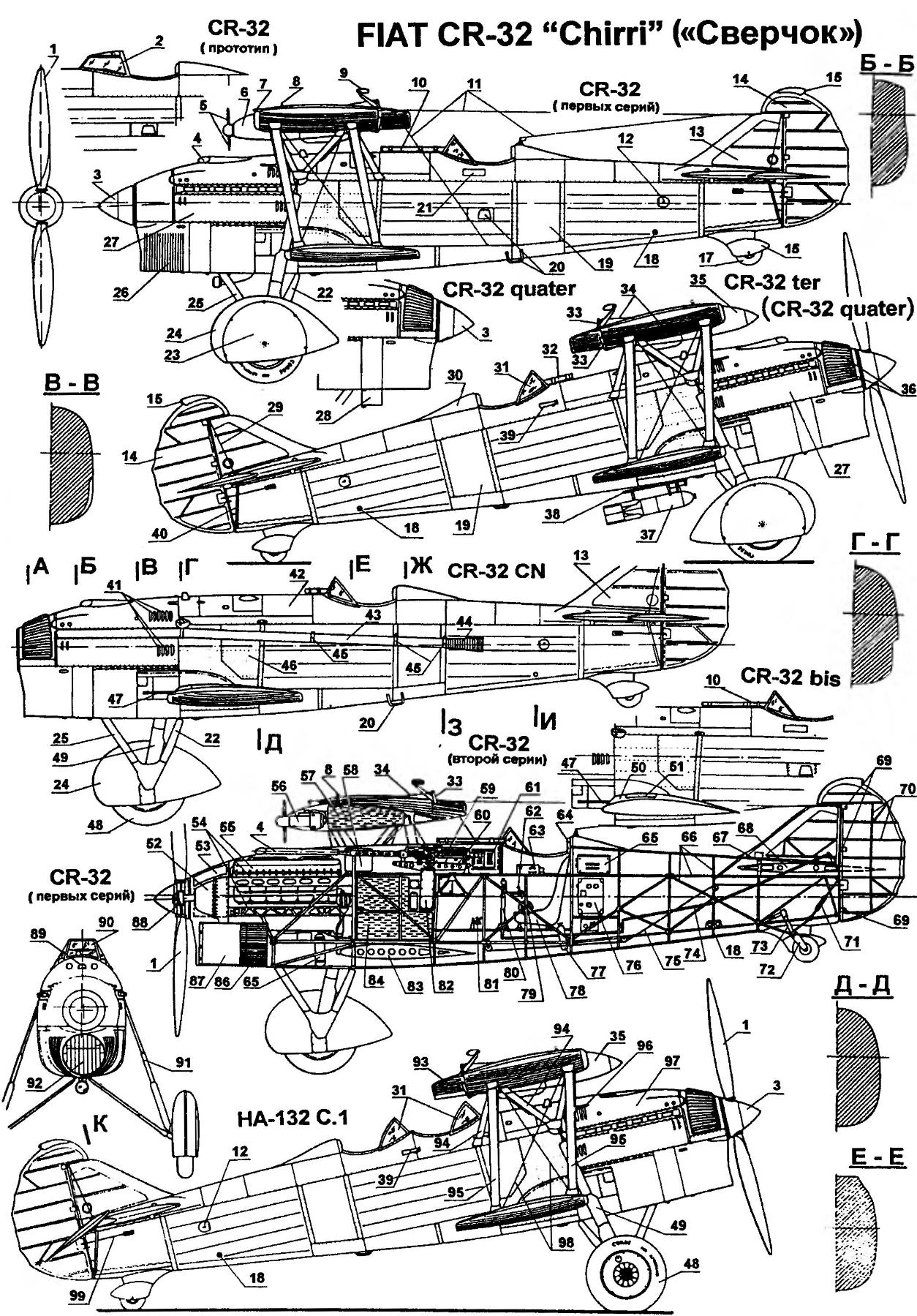 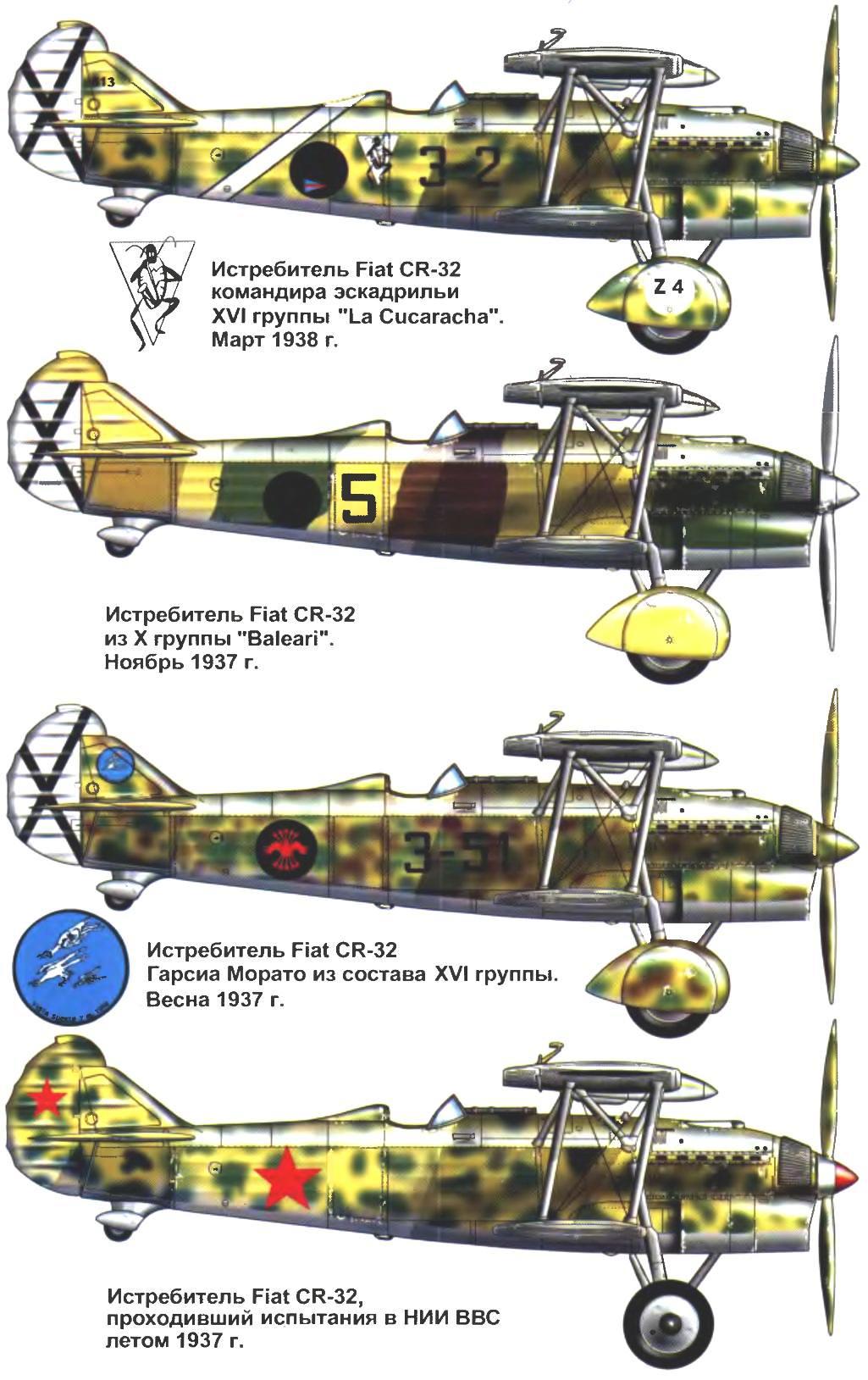 The cockpit of the open type placed between the fourth and sixth frames. The pilot’s seat had adjustable height, and had a depression (the Cup) under the parachute. The pilot’s head in the front was covered by a transparent visor made of three flat panels of plexiglass center section of the canopy was made of armored glass. Behind the headrest has a small fairing clean aerodynamic shape. Before the visor was the optical sight tube type. The instrument panel had illuminated, which gave the opportunity to fly in bad weather and at night. On the left behind the pilot’s seat was fixed oxygen cylinder. In the outside compartment can fit the radio to the camera or to conduct photo-reconnaissance. On the ninth frame (right and left) were steel panels with lifting holes.
Wing purely expressed polutorapolnoy schemes, straight, rounded in terms of endings. The upper and lower wings are identical in design and made with the dvuhlonzheronnoe scheme, wherein the upper wing forward relative to the lower 300 mm of the tubular Spars. Longitudinal power set of each wing was rib and polonaruwa. Additional rigidity to the wing provided internal cables-braces. Ailerons were located only on the upper wing; their chord was 310 mm and breadth is 2350 mm. Control cable Aileron. The ailerons had aerodynamic compensation (balancing) of the type of Benshi, which was a delivered on steel racks profiled aerodynamic surfaces. In the Central part of the upper wing, in acting the fairing, placed additional fuel tank. On the first series aircraft in front of the fairing housed a wind generator contained in the action by a two-blade fan from the incoming flow. The rigidity of the biplane box wing provided four pairs of profiled struts-struts-type farms of Warren. To the fuselage, the upper wing is attached to a short N-shaped struts-a struts. Brace tied the top and bottom of the wing only between the outermost pairs of racks. Angle transverse V, the upper wing was 1.8°. Console bottom of the wing, fastened to the fuselage at two nodes, installed with transverse V 1.5°. The angle of attack of the upper wing is 0.4°. The lower wing had zero angle of attack. The wing skin fabric.
Tail with duralumin frame and fabric covering. Structurally, the horizontal tail consisted of a stabiliser with adjustable angle setting and elevators horn compensation. The control mechanism of changing the installation angle of the stabilizer cable from the knob on the left side of the cockpit. The Elevator control is hard, from the control stick. The vertical tail consisted of a keel and rudder. The latter, as well as the elevators, had a horn compensation. Control of the rudder cable from the pedals. To ensure greater rigidity of the stabilizer and fin massed rope braces.
The undercarriage is fixed, truss-type with independent wheels, closed fairing. Profiled main landing gear had a hydraulic damper. Each main landing gear was supported by two struts, which are mounted to the bottom of the first frame and to the bottom of the tubes motor. The tail wheel is enclosed by the fairing, svobodnozhivushchie, with rubber cushioning.
The power plant of the aircraft consisted of a geared V-shaped 12-cylinder in-line engine liquid-cooled FIAT A-30 RA capacity (altitude 3050 m) 591 HP at 2600 rpm On some CR-32 of the first series and all subsequent modifications to install the engine FIAT A-30 RA bis that during takeoff short-term (up to three minutes) could give power of 789 HP at 2900 rpm On the aircraft used both versions of the engine (provided their interchangeability).
Screw FIAT two-bladed, metallic, with the ability to change the pitch on the ground. To compensate the moment unfold from the rotating propeller aircraft engine on a plane was mounted at an angle of 0°55″ to the left of the axis plane and an angle of 0°30″ down. But to fend off the turning point and failed.
A motor housed radiators: oil followed by the water. The cooling air can reach them through the tunnel round shape. Air flow was regulated through a louver controllable from the cockpit. Was given air through a slot located behind a water radiator over the surface of the lower wing.
Technical characteristics of modifications of the aircraft CR-32 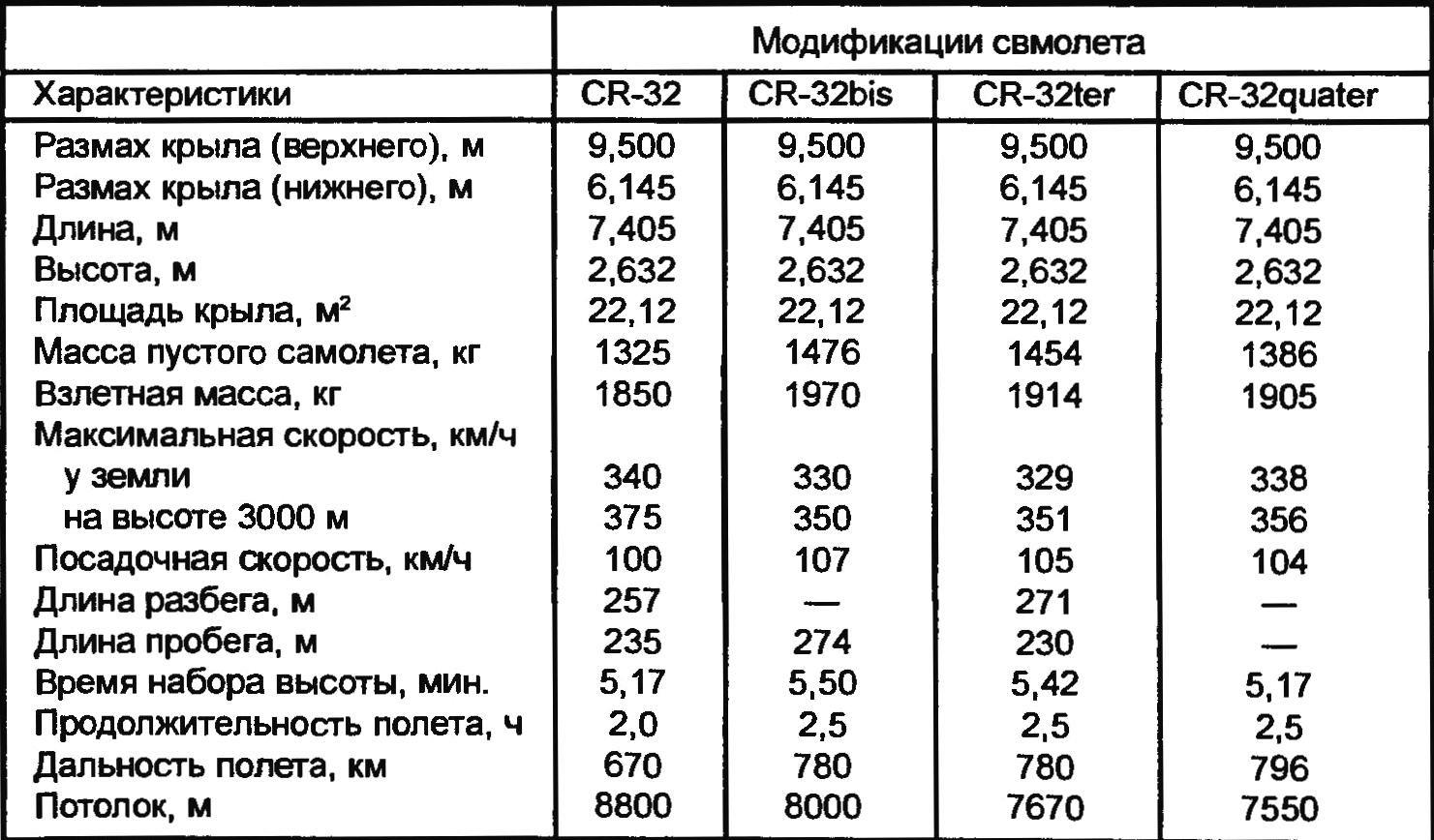 As fuel was used a mixture of gasoline, benzene and alcohol. All modifications CR-32 had two fuel tanks: the main capacity 340 litres placed between the engine and the cockpit, and an additional 25-litre — in the Central part of the upper wing. From the main tank the fuel supplied to the engine by the pump, and an additional gravity pipeline, held inside the left brace of the upper wing. A water tank with a capacity of 4.73 l stood between the guns in the upper fuselage in the area of the first power frame. The oil tank capacity of 24 l was over the motor gear.
On the plane in the outside compartment would be installed, the radio RA-80-1, or camera type AGR-90 AGR-61. The first series aircraft were equipped with an optical sight with a CR-32ter raised the sights are reflex type.
Over the fuselage fuel tank on a special mount with angle +1°30” with respect to the axis of the aircraft equipped with two synchronised 12.7 mm machine gun Bredra-SAFAT. On the first series of machines were standing 7,69-mm machine guns. On the modification of CR-32bis on top of the lower wing outside of the rotor swept, installed two additional 7,69-mm machine gun. Aircraft modifications CR-32ter and CR-32quater were only two fuselage mounted 12.7-mm machine gun with ammunition 350 rounds each. These modifications could carry on the ventral hardpoints up to 12 pieces of 2.25-kg bombs or two 45-kg bombs, or one 90-kg bomb.
N. Food reserve was, A. CHECHIN, Kharkov