Our journal has several articles dedicated to the subject of the application with the use of such waste material, as various bottles. We return to this theme, offering our readers the article author of the suburban town of Vidnoye B. V. Akimov, on the advice which can be disposed of in the country the construction of much of the discarded waste of household. What would I had to either build a house or dacha in six acres primarily designed, as would the shortage of land to combine several functions with minimal cost.

Because snowmelt spring water on our land delayed until the end of may — beginning of June, the question of their removal with the goal of accelerating the use of the site has always been problematic. In addition to the drainage grooves around the perimeter of the plot had to think about additional drainage in the middle of it. And then it took to build, and a sidewalk path concrete tiles through the entire site. So I decided to combine these two things into one — to combine the construction of a sidewalk path with a drainage groove. Moreover, the construction of drainage… unnecessary to use glass bottles. Experiences already had: before this dish I had to lay to divert water under carriageways roads. Practice then showed through the spaces between stacked in several rows of bottles of well water: bottles are a wonderful substitute for traditional drainage pipes.

There is an idea — then you can begin to translate it into practice.

First, pegs and cord marked track, where should be the path and dig a drainage ditch. The groove dug to a depth of 0.8—1.0 m with the obligatory slope of the bottom towards the lowest part of the site. In this cultural layer of soil trying not to disturb the clay.

The bottom of the grooves sprinkled a layer of sand with a thickness of 5-8 cm, after which it in several rows laid glass bottles. There to fill the rest of the volume sketched cans, broken glass, pieces of slate and brick, other “good”, which on the site was complete. All of this on top where covered with sheets of rusty iron, where pieces of roofing material and slate, where the plastic wrap — fit all.

Just fell asleep on top of the layer previously removed from the grooves of the clay. With the help of a primitive wooden tamping this layer is thoroughly rammed, from time to time pouring water from a watering can. 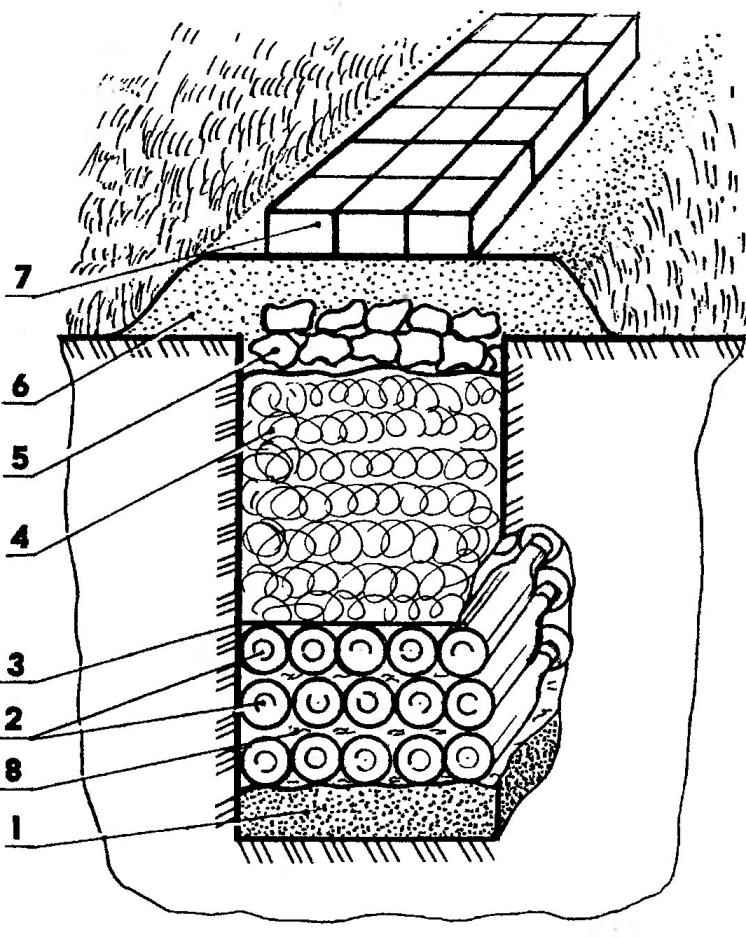 A drainage trench in the context of:

From the construction of the house left a lot of chipped silicate blocks, which after additional grinding is also filled in the trench on top of the clay layer, although would be better if they was to outline early — on bottle.

The thus obtained “sandwich trench” fell asleep on top of a layer of sand with a thickness of 10-15 cm to avoid subsequent shrinkage of the soil under the tiles, a layer of sand carefully (from a watering can) poured water, pouring from time to time with new portions until the layer is not compacted.

After the prepared sandy base, and started laying paving slabs. So they lay exactly along the future tracks laid for the control pipe. Using a wooden (plastic) trowel, which has established a building level, before laying each tile leveled sand along (including slope) and across the track.

After laying each tile next leveled the pipe and customized using the rammer to the previously laid, laying checking the level and adding, where necessary, the sand under the tiles and between the tiles.

As a result of work managed to kill two birds with one stone — pave sidewalk path and to ensure water drainage from the site to the drainage groove, and with minimal material costs. Besides saving a layer of fertile soil from the groove replenished the beds on the plot.