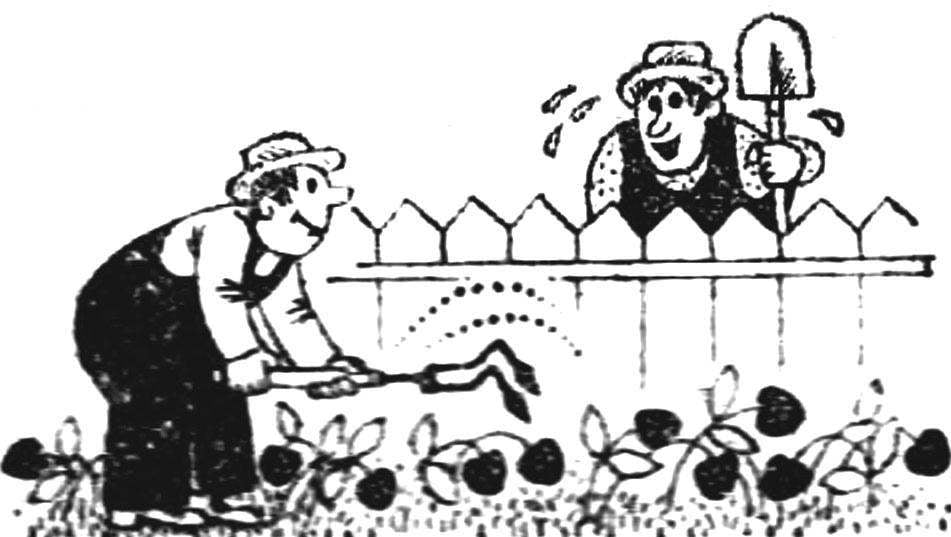 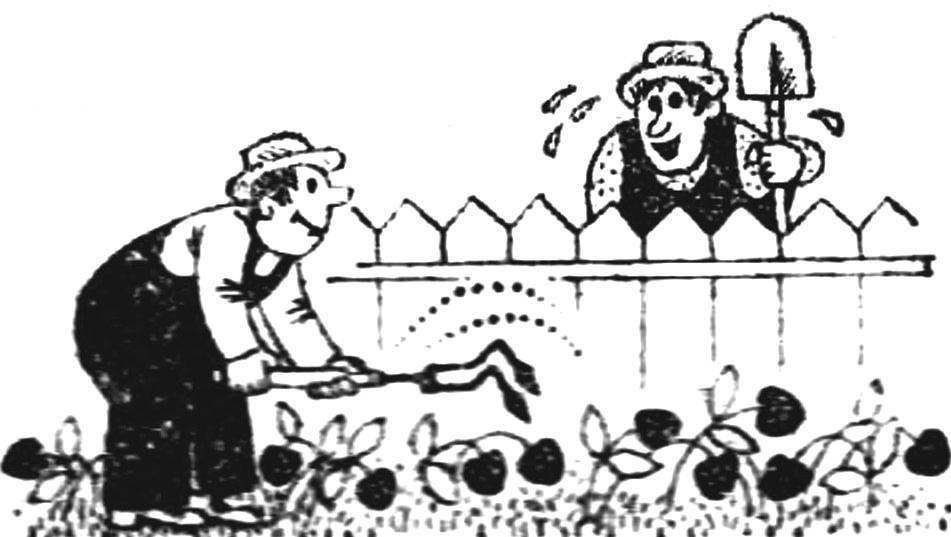 My tools are designed for processing of soil in the garden and the vegetable garden. The main type of work in the spring and summer — preparation of beds for planting and care of plants. Therefore, more than a third of the set are rippers. They are divided into three types: one-, two – and trehrozhkovye, and each is used depending on the planting density and the soil conditions. Where gaps between plants are great, easy to work trehrozhkovye — they are the most productive; and where planting is thickened, handy slowly loosen the ground two or odnokrylym.
I know from experience: most running — odnorazovye rippers. The fact that the gardens are usually planted closely, saving every inch of ground. Root system in plants is various, and therefore had to make some choices. Rippers differ from each other only in size, which depend on the type of cultivated crops. So the order and start with the smallest.
FOR FLOWERS, AND STRAWBERRIES
Ripper-the baby is especially good for elderly and children (Fig. 1, option 1). And those and others, I’ve seen them work with pleasure. The soil lends itself very easily to him. It is intended for operation in highly dense areas, literally in the Bush.

Fig. 1. Odnokryly Ripper:
1 — hook, 2 — ring, 3 — handle.
Cultivator made of steel rod Ø 6 mm without heat treatment. The rod bent in a vise, and then forged. The other end is pointed with a file, and it mounted a short wooden handle. So she did not split, the end it is provided with a ring cut from aluminum tube Ø 20 mm.
VEGETABLE GARDEN
Gryadochnogo Ripper. Is used (Fig. 1, option 2) for deep loosening in tight spaces. It is convenient to also treat the soil for carrot, beet, cucumber, onion-beds, among the strawberry bushes and large flowers.

Fig. 2. Weld cultivator with handle:
1 — end of Ripper, 2 — tube, 3— screw.
It is made of a rod Ø 8 mm (such a rod made by sun loungers, where in the baths bathe infants).
Pen and here is a short, but thicker.
EVEN UNDER THE TREES!
Universal. Cultivator (Fig. 1, option 3) is so named because cultivable land almost all the plantings. Even under the trees!
But I use it mostly for loosening soil under the currant bushes, gooseberry, chokeberry, lilac.

Fig. 3. Threaded coupling cultivator with handle:
1 — end of Ripper, 2 — nut 3 — tube 4 — screw.
The Ripper has a long and durable handle.
The hook is made from rod-Ø 10 mm, such diameters have the wheel axle pushchairs. Sometimes become unusable stroller nothing rusting on the street. And they are made of good metal!
As hook universal cultivator drop a significant load, after forging it must be tempered. Doing it this way. Hook piercing on fire and slowly dip into the engine oil. After the metal has cooled, wipe it with a cloth, removing the scale, and again keep in flame till appearance of Golden color. Hold on fire, dipped in cold water.
MORE CONVENIENT THAN A HOE
Finally, odnokryly Ripper (figure 1, option 4) from rod Ø 12 mm. It is almost a chopper, with the narrow and sharp blade. It is intended and to care for large bushes, trees and coarse preparation of beds for planting. But this, of course, is not limited to the range of its application. The cultivator has a long handle, they can work standing up. It is convenient especially for the elderly. 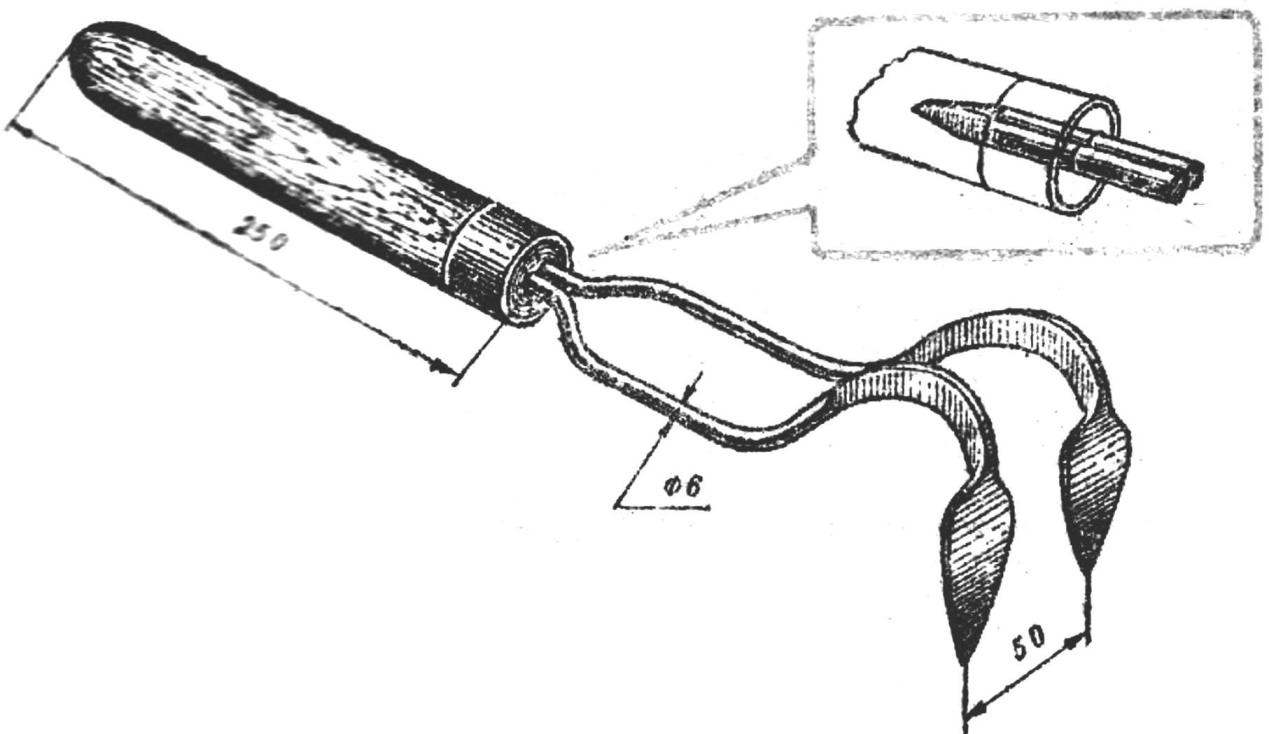 Figure 4. Dvuhruchevaja Ripper.
The hook is forged and tempered by the technology described earlier. One subtlety: the load on the hook is much higher, so need to mount it as shown in figure 2. Such fastening is more reliable and durable.
Now a General remark. 8 principle, it is possible to have only two handles: short and long. At the end of the short pin nut with M6 thread, and at the end of a long, M10. Well, at the end of the hook should cut the thread (Fig. 3).
TWO FURROWS AT ONCE
Dvuhruchevaja cultivator is made of the bar Ø6 mm. Them to handle rare landing: the same vegetables, berries, flowers.
Made instrument (Fig.4) of the workpiece 800 mm. Double end hook is made with a hammer in the form of a wedge, and corrects a file. The rod is thin, so the forge and wedge and hooks without pre-heating, but tempering the working part of the tool. The workpiece is bent in half. On the tip of the wedge pushed the wooden handle, supported by an aluminum ring.
TRIDENT GROWER
Trehrozhkovye Ripper (Fig.5) a few minutes the Packed bed to turn literally into the beaten foam, quickly bring R-” Doc soil under tomato bushes among roses, tiger lilies and so on. 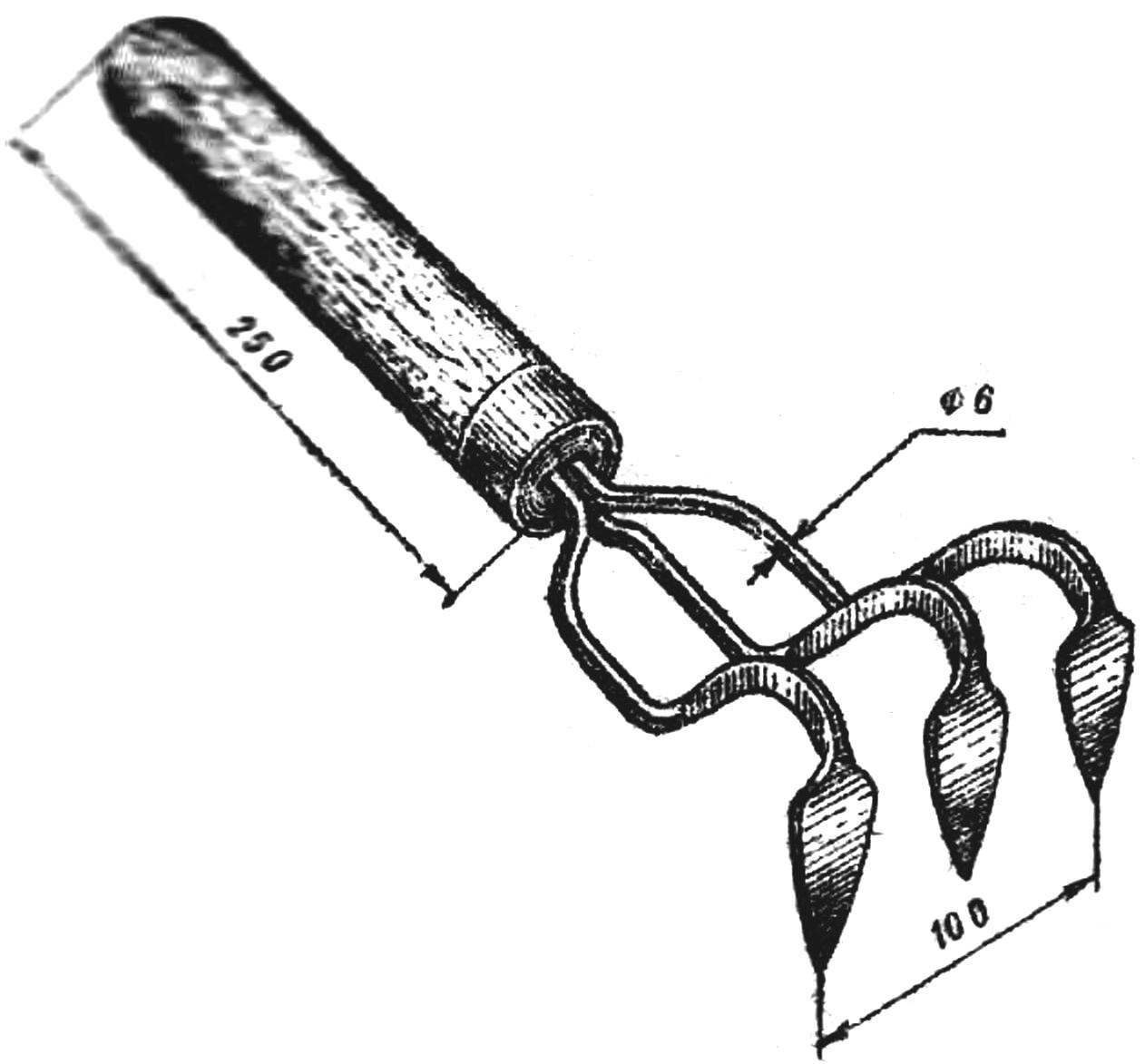 Fig. 5. Trehrozhkovye Ripper.
The Ripper is made from two blanks Ø 6 mm and a length of 800 mm and 400 mm Long piece with forged hooks bent in half, and welded thereto, the average hook. Then they hardened together. The end of Ripper sharpened, and he pushed the short handle.
GARDEN CULTIVATOR
I’ll tell you more about the powerful trehrazovom the cultivator (Fig. 6) bars of Ø 8 mm. it has no equal in the care of fruit trees and bushes, thanks to the long handle is comfortable to handle land of a large area. 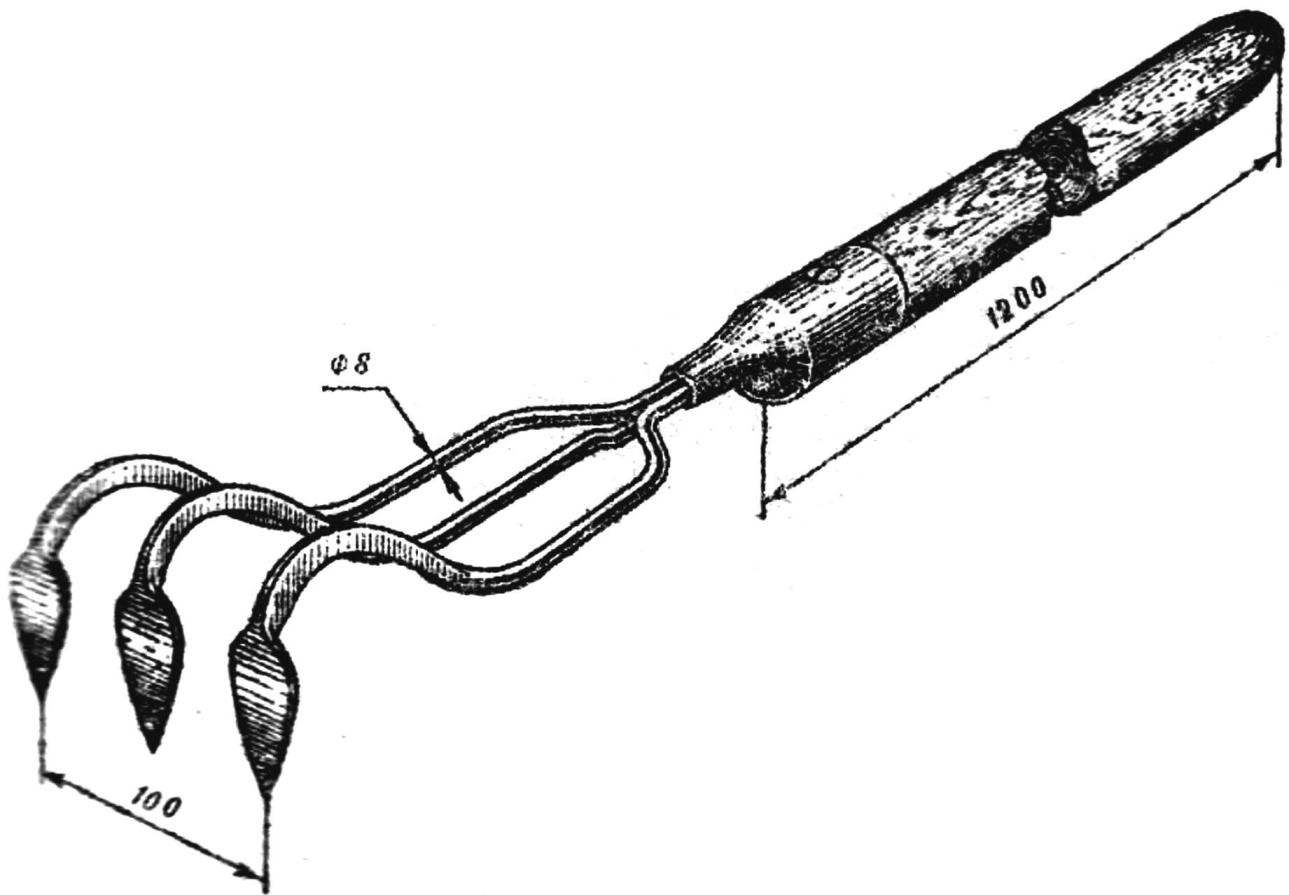 Fig. 6. Powerful cultivator with a welded seal hook.
It is made on exactly the same technology as the previous trehrozhkovye Ripper, but only forge hooks should and the heated state. And the method of fastening it to the handle several different. Safer to weld the Ripper to cut the pipe approximately as shown in figure 2. The last phase is the hardening.
All rippers are durable, wear resistance and reliability. They are easily included even in heavy and viscous soil.
UNIVERSAL DIGGER
The device is intended for digging out individual roots and bulbs where a shovel is impossible; it is possible to do all kinds of holes and hollows.

Fig. 7. Universal digger.
Externally, the digger resembles a chisel. Actually, she made it, but the blade is thinned with a file to make it easier to work with. You can make a digger also from worn-out file, first releasing it thermally.
SCOOP
It is good that will never break. Please note: it is missing the neck is the weakest point of all the scoops that are made by the industry. Made a tool out of the pipe, a portion of a cylindrical surface which is ground off on electronicdata. Cut edges are then somewhat diluted — turned recruit. Further, Cervelo imparted to the corresponding form, and it is mounted on the handle.

Fig. 8. Scoop.
HOE-CULTIVATOR
The following is a small group of hoes. One of them has the same structure as any of the rippers, described in the first article. Only the hook is given a somewhat different shape, corresponding to the purpose of the tool. 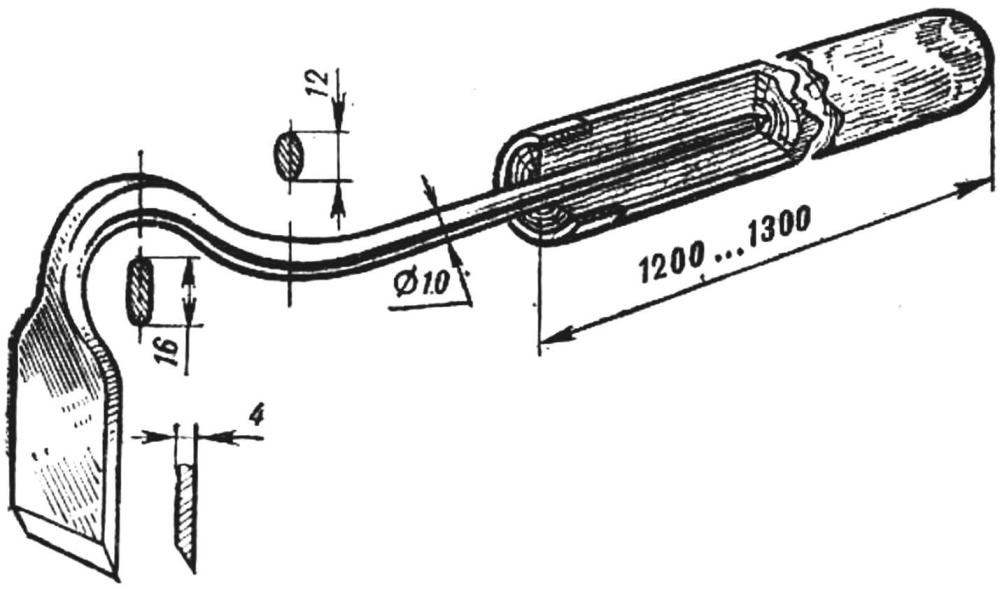 Fig.9. Hoe-cultivator.
This chopper easy to work in cramped conditions, in hushchyn, where conventional hoe unfold. In addition, the shape of the tool allows you to loosen the soil up, not crushing her.
COMBINED HOE
It is good here: it creates a low resistance of the soil due to the special form. Thin and sharp blade it is very copes well with the roots of the weeds the Other end of the chopper to break the earthen clods, to make the furrows for planting, grooves for water drainage. 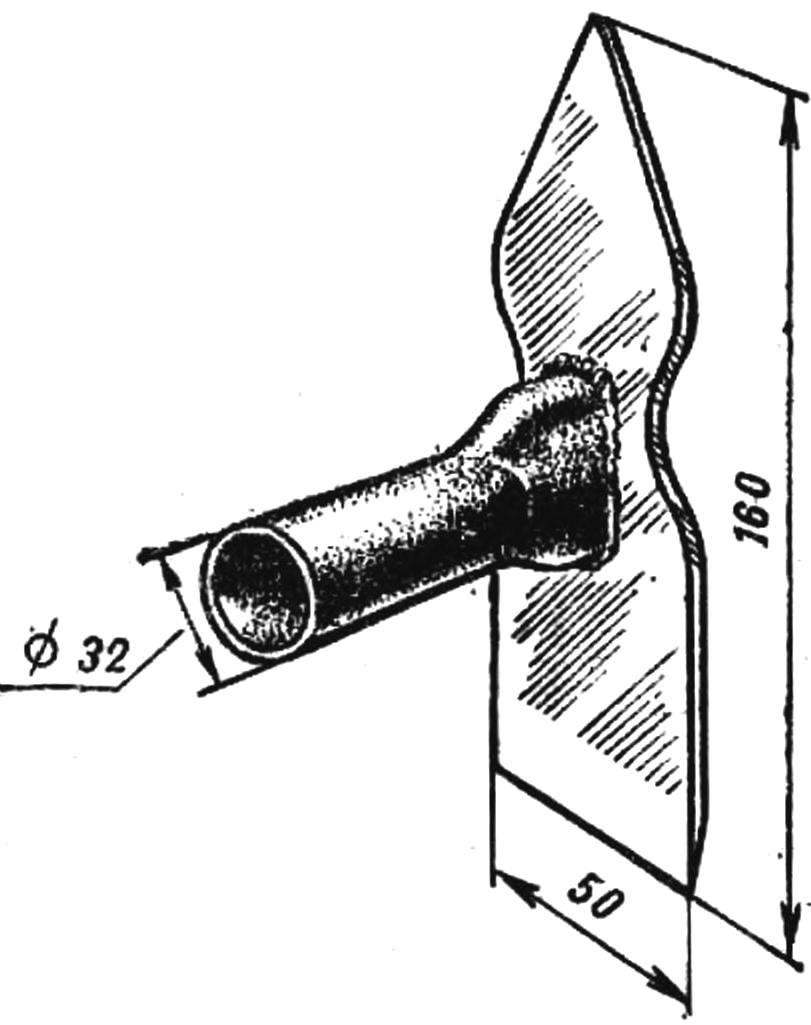 Fig. 10. Combined hoe.
Combined hoe consists of two parts: the blade of the saw or chip shovel (shovel — tempering) and a piece of pipe, sawn off from the old bed. Pipe with one end flattened and welded to the blade. At the other end is inserted into the handle.
WITH REINFORCED BLADE
For very heavy clay soils it is necessary to have a tool with power blade. This is achieved by flanging. Figure 11 shows not one tooth off of the blade, and five is option. I have a chopper with a beaded blade With one tooth and five.

Fig. 11. Reinforced hoe.
SCRAPER
This is the original tool. Like him I have never met. Designed to destroy weeds. His move from itself on the surface of the earth — the weeds are cut. The earth remains intact. This scraper is good to clean the paths in the garden. 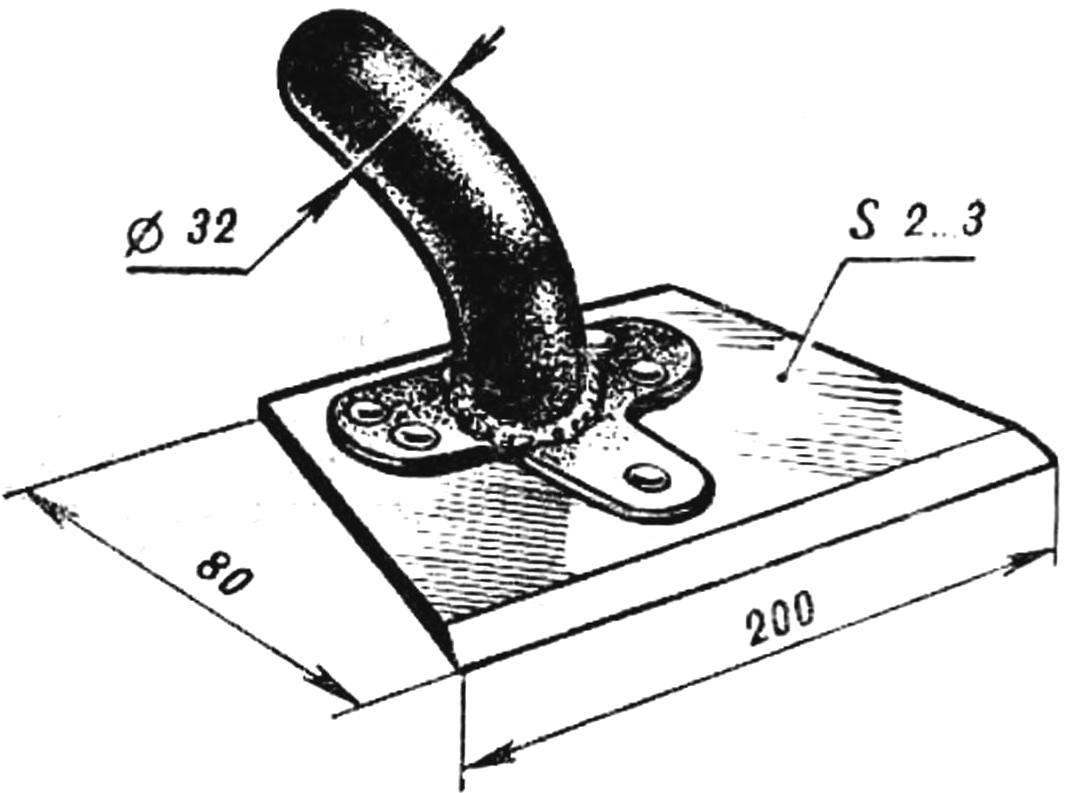 Fig. 12. Scraper.
It is made of two parts: a piece of saw blade and cutting of the pipe. The pipe is now cut from the top arc of the old beds and riveted (or welded) to the canvas. At the other end of the pipe is inserted into the handle.
The PLOW
Rather, the irrigation tool. Ditches for irrigation and drainage, make it a plow. But with the same success they can be putting the moves on some plants. As the plow mounted on a long handle, to work them without getting tired. 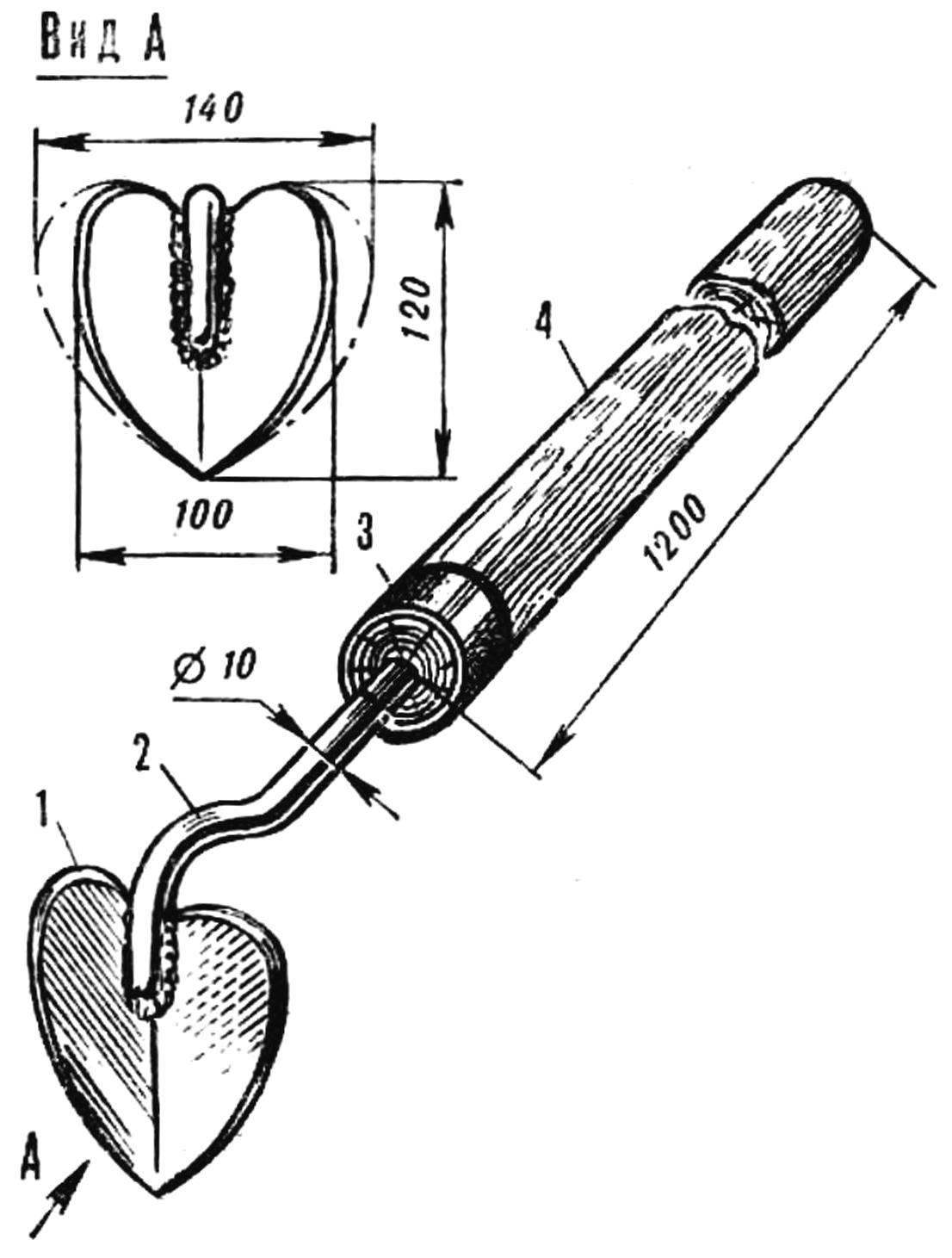 Fig. 13. The plow:
1 — shield, 2 — handle, 3 — ring, 4 — pen.
The ploughshare of the plow is made of sheet steel with a thickness of 2-3 mm. is welded To it a handle with a handle. The grip design is exactly the same as any of the rippers. After welding the plow should definitely temper.
PUNCH
An indispensable tool on the site. Feed the trees, take soil for analysis, to make a hole for a stake in these and other cases, without the punch can not do. Operate it is no wonder: one movement of the tool vsazhivaya in the ground, then rotates around a vertical axis and is removed together with the column of soil. Just drop in the hole something desirable — do not get it then.

Fig. 14. Punch:
1 grab handle, 2 — handle. 3 — step, 4 — working body.
The design of the hammer used tubes of the same old bed. Part of the cylindrical surface is ground off by electronicam, the edges of her divorced and sharpened with a file. This is the working part. Top put on and welded to the pipe footrest (it occurs leg at work). The top punch is crowned by a T-shaped bar grab handle.
The length of the working part of the pick up on its growth.
PICK-UP FALLEN APPLES
I gave it to my neighbor at the cottage. It is difficult to bend, so the pickup was to her as it is impossible by the way. 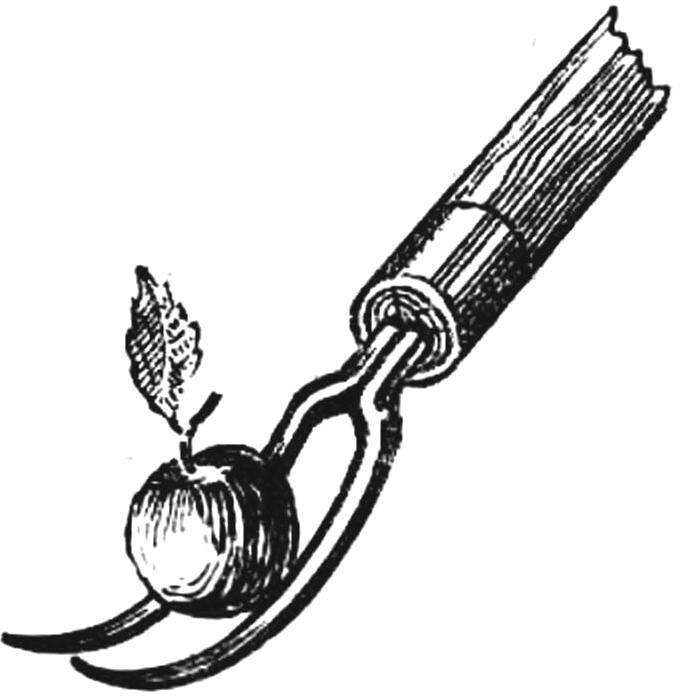 Fig. 15. The pick-up.
By design, it is similar to the two-kryuchkovo Ripper, no need to forge and temper. Load of the fruit is small, so it is sufficient to bend the teeth of thick wire and drive the bent end into the handle.
THE ORIGINAL RAKE
Made from forks. Their teeth shortened, then heated, bent and sharpened. The handle is fastened as usual. 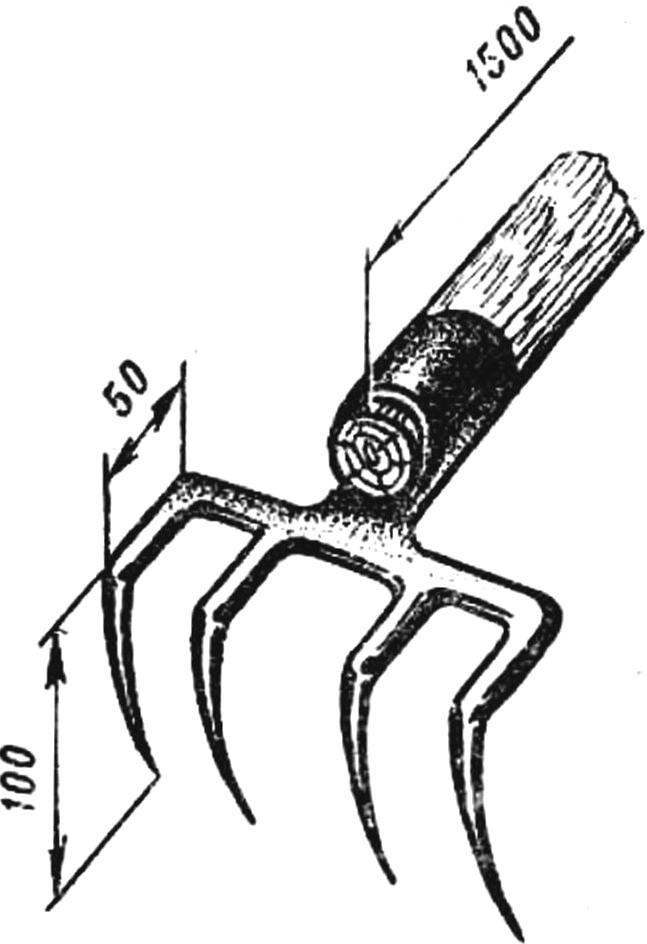 Fig. 16. Rake.
This is a very powerful rake. On appointment they say no. Everyone knows what they need.
FROM THE EDITOR
Ending publication of the N instruments. A. Kovalevsky, hope it will be of interest to gardeners and vegetable growers-fans and members of the hothouse farms. It is possible that some of the presents they will adopt. We are grateful to those who, in turn, offer variants of those or other improvised tools, successfully used in home gardens.
I hope that the producers of gardening tools, also interested in the proposed projects and use the useful ideas contained in them.