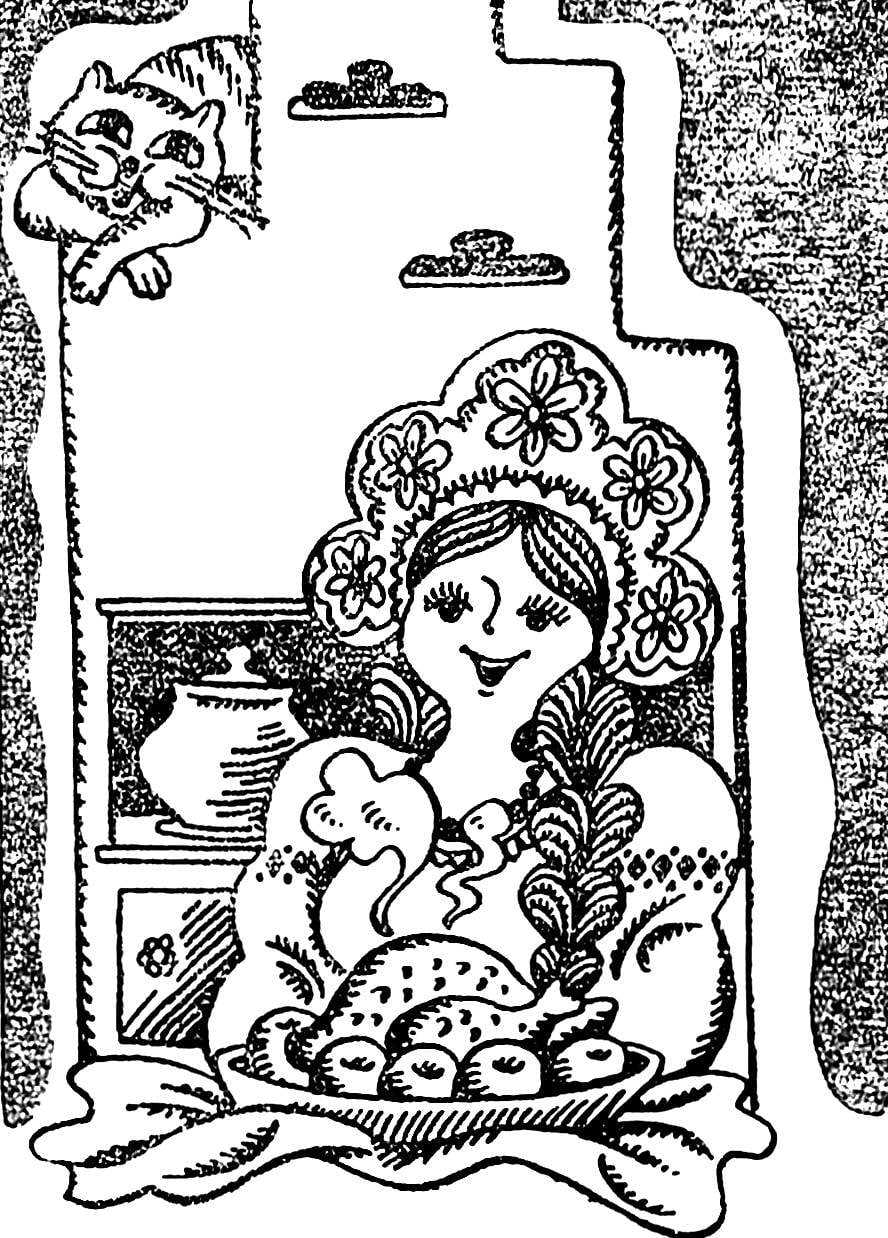 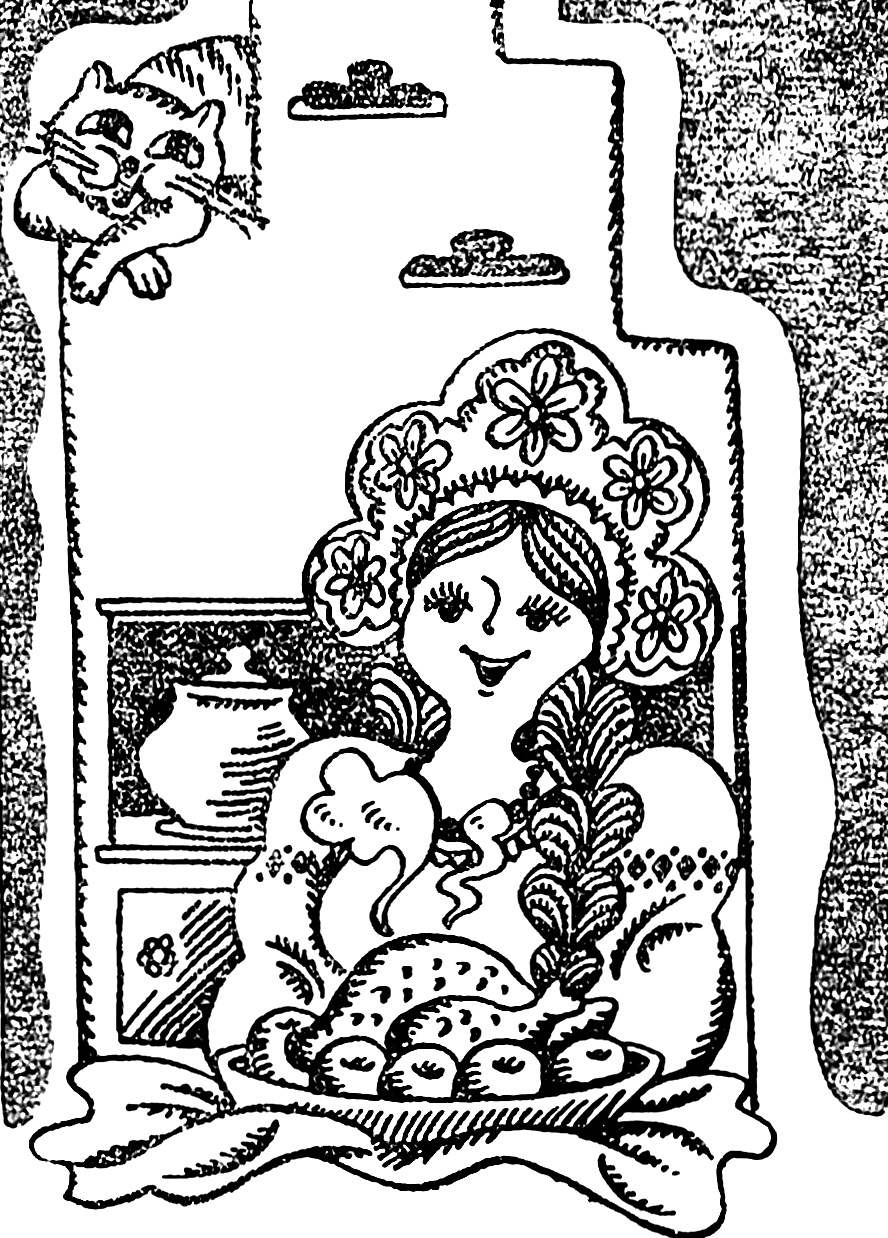 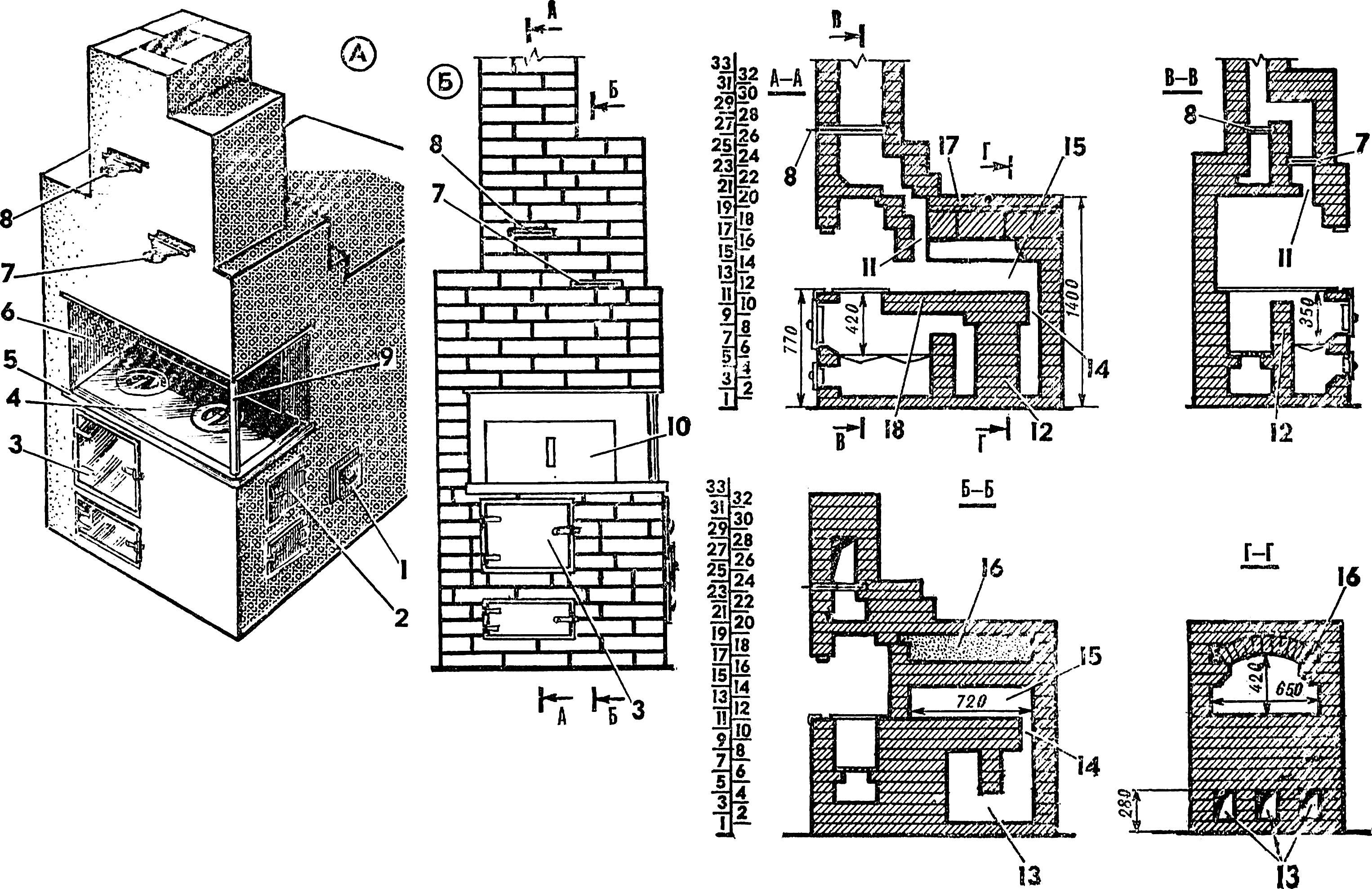 Fig. 1. Oven “housekeeper” (A — General view, B — front view; cross section of this reduction):
1 — a hot water box, 2 — small firebox with podduvalom, 3 — large firebox with podduvalom, 4 — hob cooker, 5 — faience-tying, 6 — perch 7 — the valve of ventilation channel 8 — the valve of the chimney, 9 — front peretrubja, 10 — valve, 11 — ventilation duct, 12 — brick wall, 13 — Podgorski, 14 — hole in the floor, 15 — a cooking chamber, 16 — mud substrate, 17 — closed 18 — under the cooking chamber.
Preparation of a clay solution. The strength of the masonry chimney depends on the correct choice of the density of the solution: it needs to be of normal fat. Usually recommended to add one part clay to two or three parts of sand. However, this method does not always lead to desired results because the quality of the clay from different deposits varies. To find the optimal proportions.
Designed for use clay measure (e.g., glass) into five equal portions. First don’t mix. In the second add sand — tenth of the glass (or half a Cup, here and further in brackets the amounts for clearly fat clay). In the third — quarter of a Cup (Cup), fourth three-fourths (half Cup), in the fifth — a full glass (two glasses). Adding water, the solution adjusted to density of sour cream, mix thoroughly with a spatula and see how it sticks to the mortar. If the blade is coated with a thin layer of the solution is skinny, heavily covered with fat, and if after thorough mixing, the formed separate clusters — normal of proportions come in the future. The sand was pre-screened through a metal mesh with a mesh not larger than 3X3 mm. the Prepared solution also preferably pass through the mesh. The density must be such that it is easily squeezed out from under the brick under the pressure of your hand. With such a consistency are well filled joints, they will be tight and thin, from 3 to 5 mm.
Brick also requires some training. Dry pellets too quickly absorb water from the mortar, which reduces the strength of masonry. Therefore, it is desirable to wet — rinsing, and high-quality bricks to soak until the not yet released all the air and they are filled with moisture.
Foundation. To “housekeeper” has served reliably for a long time, it should be under lay, suglobov into the soil not less than 500-600 mm, massive base of rubble stone or concrete. And the sole it should be 50— 100mm wider than the main body, and the last 50 mm wider than the dimensions of the furnace. The bottom of the pit must be compacted with a heavy tamper. In dry soil, it is acceptable to laying the Foundation of good brick on lime or lime-cement mortar. Waterproofing (2-3 layers of roofing felt or pergamina) fit for 2-3 rows to the ground, which, in turn, starts in 2-3 rows below the floor level. This clutch still belongs to the Foundation. With its floor level at the base with a ruler and try square draw a contour of the first number of the actual chimney masonry; length 1400, width 890 mm.
The first row of the masonry chimney (Fig. 2). The outside laid out from the whole and the middle is filled with broken bricks.
Second row. Here laid the two bricks (a, b) for columns under partition, left window (in) four cleansing, as well as bottom part are large firebox with surfaced in order to facilitate the shoveling of ash, the front brick (g).
Third row. It installs a blower door (a) large firebox and door cleansing is the ash pit (b) small fire (the doors purges not shown).
Fourth row. Installing the blower door (b) small firebox. Overlap brick-doors cleansing. If you choose not to install the doors before the end of a laying leave them open. At the last stage of the calculation, remove them through the remaining solution and fill the bricks so that their edges slightly protrude from the plane of the walls of the furnace: now they will be easy to find when you need a new Shoe.
Fifth row. Columns of stacked brick walls, which is attached castle (a) in the walls of the furnace. The arch blew a large firebox tapers to install the grates, and the door blew overlaps with a brick.
Under the partition remain three holes-Podgorski size 120Х210 mm each. Through them of hot gases from the first section of the heating chamber leads to a second section (Ref. 13 B — B and d — G). 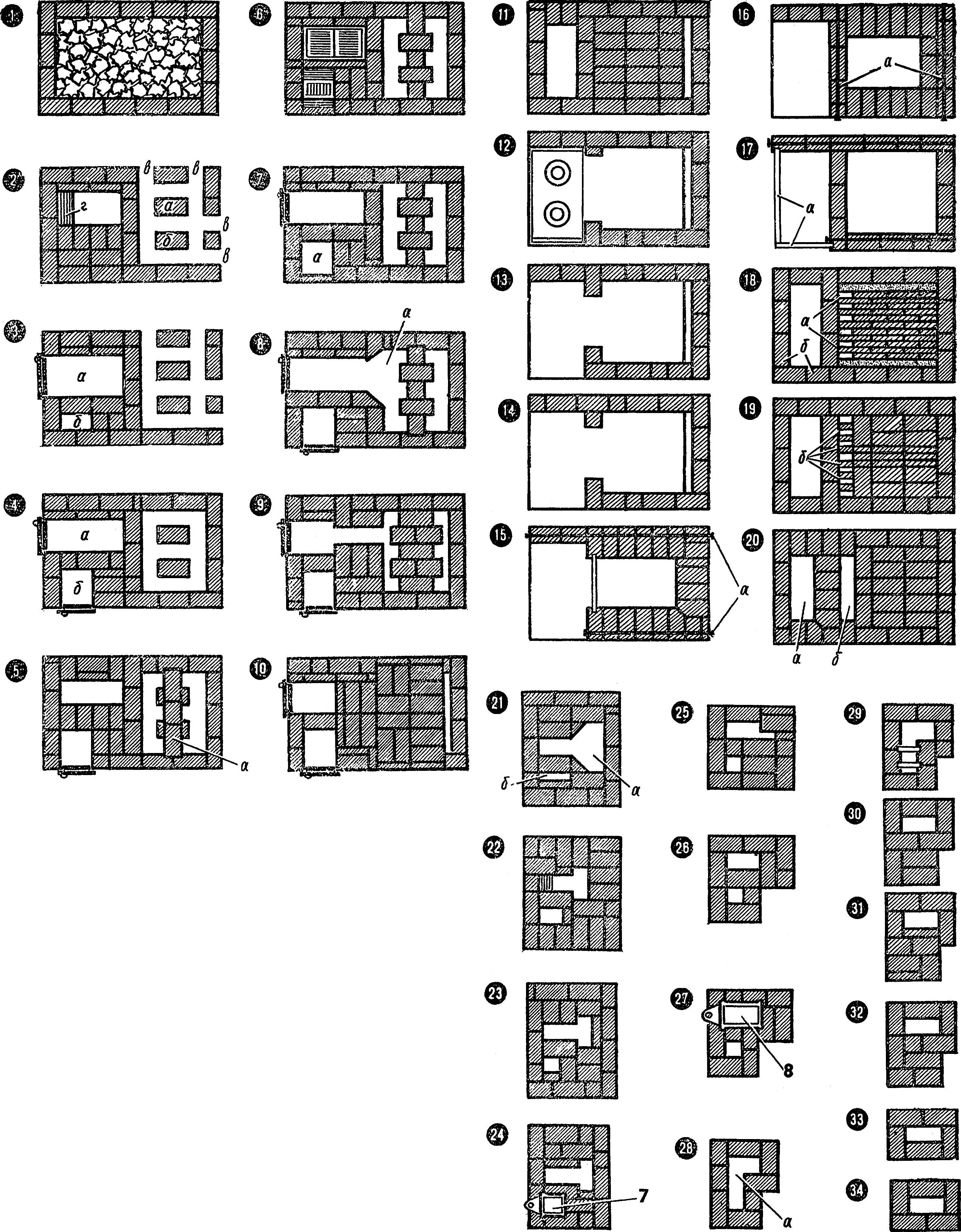 Fig. 2. Masonry series (porjadovki).
The sixth row. Fit and overlap bricks to the grate both fire boxes; front and rear bricks small firebox stesyvajut that the fuel itself is pushed on the grate and burned — that’s why it is suitable even raw wood.
The seventh row. Set door large firebox is small firebox (a).
The eighth row. Mounted the small door of the firebox. From the large firebox in the side of the barrier extends a horizontal channel (a): this would provide uniform heating throughout the height.
The ninth row. The horizontal channel is narrowed by overhanging him with bricks. Partition becomes wider than the overlap of the prepared canal.
The tenth row. Laid the first layer of the floor, overlapping the horizontal channel and the partition. The back wall remains a gap (Ref. 14 b — B and A — A) width 70 and a length of 650 mm.
The eleventh row. Overlap the doors of the fire boxes. Laying a second layer of the floor, the gap persists.
Twelfth row. On a thin layer of mortar is placed in the cast-iron stove with burners. The outer rows from the front and side plates are made of faience, that is, strengthens the bottom of the hearth.
The thirteenth and fourteenth rows are similar: there is an extensive bandaging of seams.
The fifteenth row. Masonry for side walls of the sealed connections (a) wire with washers and nuts or strip steel, with threaded shanks. Brow to simplify not formed arched and rectangular shape (height and width 400 420 mm), with overlapping strip steel 10X40X850 mm. Wall above the cooking chamber is thick as a brick, hewn off below (see A — A).
The sixteenth row. First is the overlap of the brow and the brickwork, and then put a when (a) the width of the furnace. On three sides of the cooking chamber is placed in the second row of bricks without stesyvanija.
The seventeenth row. After laying the brick are the same as in the 15th row. Of strip steel arranged in the base (a) under peretrube that in the corner is supported by round steel rod Ø 16 mm (not thinner) or the corresponding pipe. Steel strip stacked in done in the brick socket.
Eighteenth row. Starts laying the arch cooking chamber based on the released bricks the 16th row (see g — G). Brick of the first row is tilted inside the camera, what under it is laid a thick layer glinobit or mortar from the gravel (see b — B, 16). Bricks (b) anterior and lateral walls of peretrubja placed on sheets.
In the first row should be laid for the arch cooking chamber bricks leave openings of width 70 and a length of 120 mm.
Nineteenth row. Holes (b) are stored.
The twentieth number. It formed a collecting channel (b), and peretrube (a) tapers from 250 mm in the previous row up to 180 mm. Wall peretrubja on the right side of the furnace is secured by a lock.
Twenty-first row. Precast channel is given the desired shape (a), and about peretrubja laid a ventilation channel (b) cross-section 70X250 mm for exhaust odors from the stove and the furnace assembled in peretrube.
Twenty-second row. A collecting channel is reduced, the front brick stesyvaja on the cone. The vent takes a rectangular shape cross-section 120X190 mm.
Twenty-third row. The vent is a square.
Twenty-fourth row. It over the vent channel is placed the valve 7 (see Fig. 1).
Twenty-fifth and twenty-sixth series. Here a collecting channel is narrowed, is formed with a smoke channel.
Twenty-seventh row. Over the flue duct is mounted the valve 8.
Twenty-eighth row. Smoke vents are combined in the horizontal (a), similar to the letter G.
Twenty-ninth row. On the combined channel are placed two steel strips — the basis for the ceiling ventilation shaft.
Thirtieth, thirty-first, thirty-second series. Over the vent trunk built up three layers of bricks, which meets fire protection requirements. The chimney is a hole with a cross section 120X260 mm.
Thirty-third row. It begins with the laying of the pipe with a thickness of one brick, and a total of five bricks, or “Paterik” channel 130X260 mm.
Thirty-fourth row. This clutch is up to the ceiling, then there is a “fuzz” with a wall thickness of a half brick, on four rows above the attic subfloor. You can continue the laying or use of asbestos, ceramic or steel pipe of suitable internal cross-section, but not necessarily is lined with fireproof materials to the roof in clay mortar, and the roof on the cement. 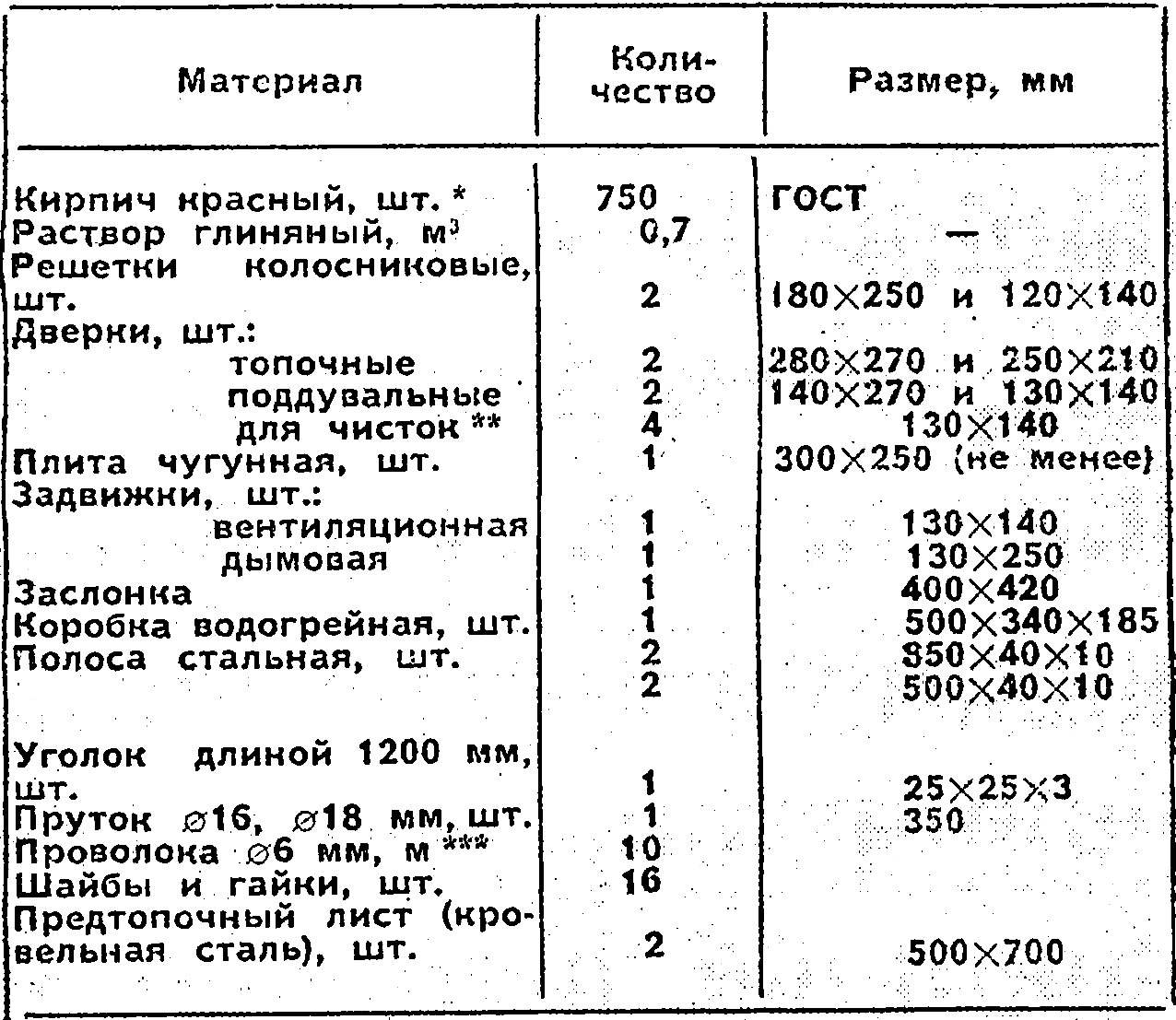 Materials for masonry stove “housekeeper”.
* Fire boxes inside desirable to lay refractory brick.
** Can be replaced with boxes from a roofing steel.
*** Use a flat steel 25X2 mm.
Oven “housekeeper” can perform the role of the heater. For this it close with a small firebox, it is easy to build a kind of boiler — water-heating box made of galvanized steel or other metal, if necessary, tinned on the inner planes. The scheme of its embedment in masonry is shown in figure 3 (only those rows, which undergo changes in comparison with is shown in figure 2). 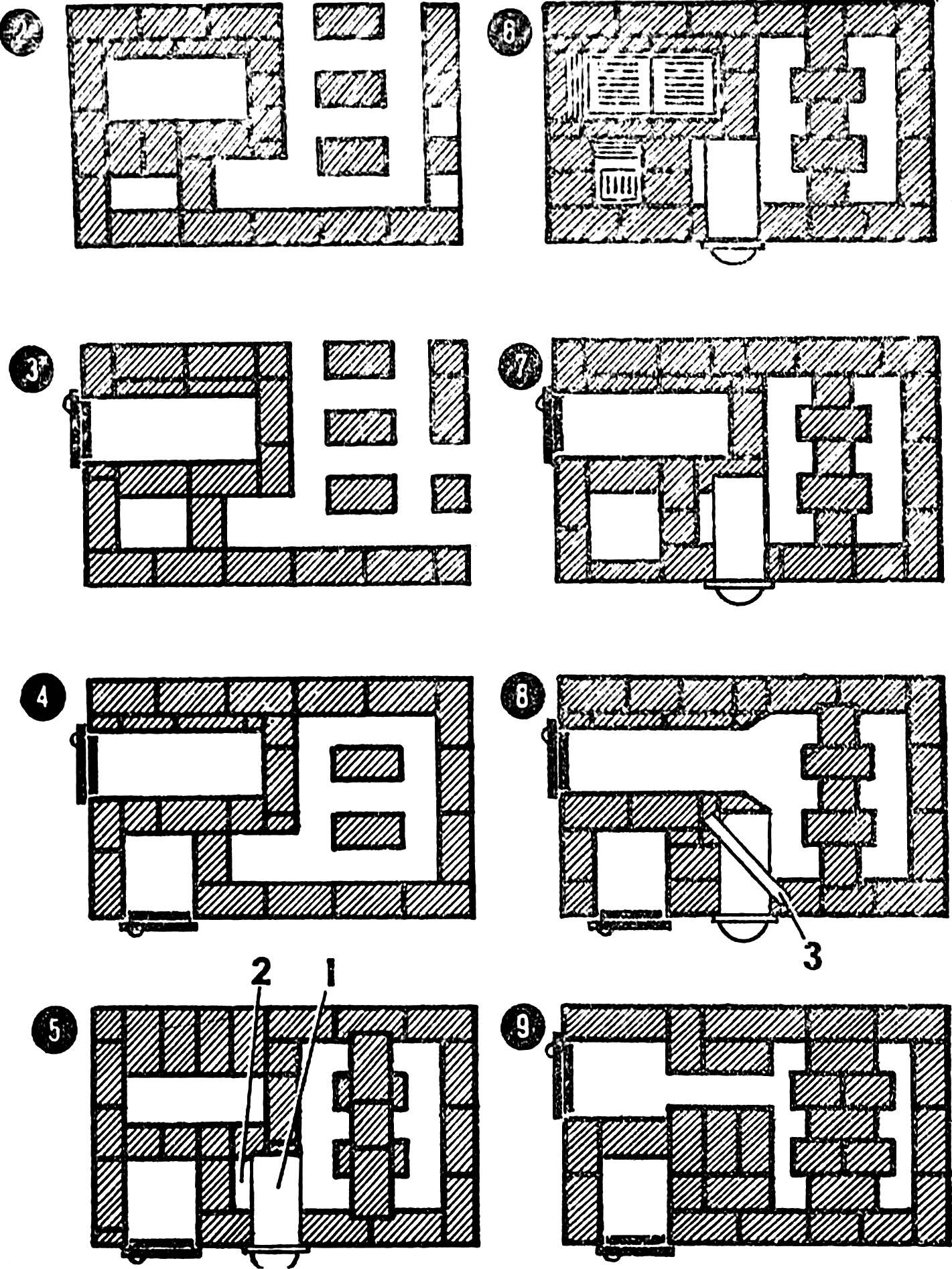 Fig. 3. Masonry rows with a water-heating box:
1 — a hot water box, 2 — channel, 3 — steel strip.
Better not to mount the box itself, and the case for it from thicker metal then the capacity will be need to extract from the furnace, and the case will work as a supplementary heating chamber. In the diagram, the fifth row shows that on the left from a water-heating device 1 is retained by the additional channel 2 for the passage of gases that were heated simultaneously from both sides. In the diagram, the eighth row is visible additional steel band 3, which prevents the compression of the water compartment stackable bricks on him next series.
After completion of the masonry of the furnace, especially soaked in water brick, it should be dried naturally by 10-12 days by opening all valves, dampers and doors. Then, an additional drying dry fuel in small portions 3-4 times a day until the oven is not dry. Only then can you begin to use it with the full tab of the fuel.
A. SHEPELEV, civil engineer