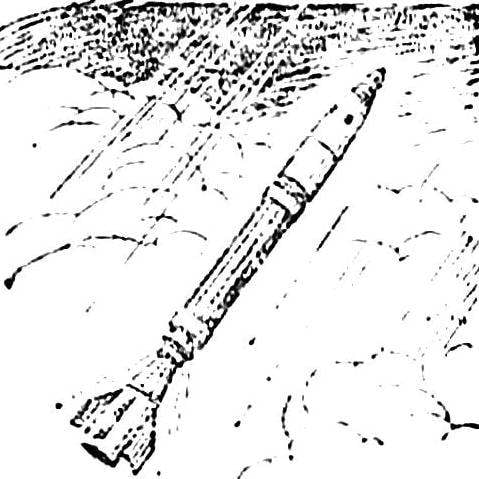 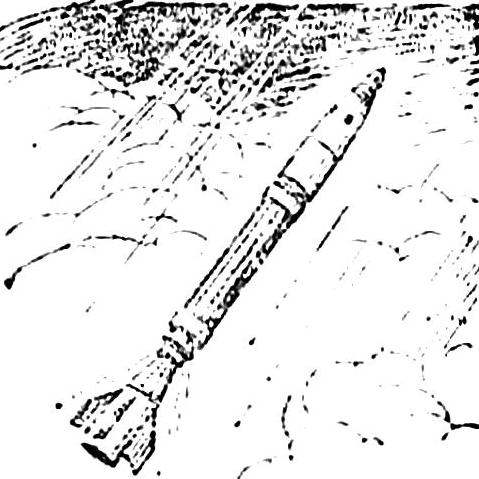 Specially for shelling rudonosnykh clouds, bringing icy “buckshot” for planting crops, created rocket the Cloud. The task is simple — to convey and spray and mid clouds of so-called reagent, iodide of tin, and a parachute to return to earth. And with “protographium” menacing cloud becomes a different person. The introduction of iodide tin completely changes the conditions of the formation of precipitation, and instead hail from the clouds will pour down life-giving rain. In some particularly difficult cases conducted emergency surgery — the cloud is fired on the approach to agricultural land. And then hail, which can not handle even a chemical reagent, the precipitation in the place where he will not bring harm to useful crops.

Structurally, the rocket is simplified. In her head part is the remote control mechanism which is closed by a cap, remove immediately before the start. After takeoff, the air flow starts to enter into the battery compartment of the remote mechanism using three trapezoidal Windows. The magnitude and duration of effects of dynamic pressure of air allows to accurately measure distance traveled and to throw the payload is directly in – cloud.
The parent part is a container carrying the checkers active smoke (in that, the gaseous, the reagent is introduced and the cloud). To exit the reagent has four holes Ø 35 mm. beneath the container, two contact plates fastened electrocapillary igniter.
The main body of the rocket is laminated fiberglass in its entirety is placed a charge of solid fuel. The outline ends launchers unit, the nozzle 12 carrying a small caliber.
Rocket closes the bottom fiberglass of the parachute compartment. It is Trehprudny a system of descent has fulfilled its operation. After the end of the combustion charge of the engine he another six seconds flies by inertia (passive portion of the flight), then there is a disclosure of small, then medium and large parachutes. Fully operational system provides vertical descent rate of not more than 6-8 m/s On the outer surface of the parachute compartment with the help of adapters, fairings sets forth the plane of the stabilizer 3 mm thick.
Model description
Model-a copy of hradobiynoyu missiles “Cloud” is created in the flying mug syut town near Moscow Elektrostal. With such models in the scale 1:3, Buyanov R. M. and Grechnev spoke at the XV national competition “Cosmos” and was ranked respectively 3rd and 4th places.
A copy of the “Clouds” were designed to compete in the category of S7 and it is available to repeat the modelers of the second year.

Fig. 2. The paint scheme of the rocket (two versions):
video mesh shading — light brown, inclined mesh shading — grey-green, vertical hatching — dark brown, horizontal shading — signal-red, inclined shading — copper-red, the cutting point of the silver.
To build a copy in scale 1:3 need the to carve three mandrels Ø 39,3, of 40.0 and 40.6 mm. the two layers of drawing paper casein glue made of billet chassis components, container and parachute compartment. After the glue has dried cut them in the length on a lathe, respectively, to 266,6 mm, two elements at 24.3 mm and 66.6 mm and 110 mm.
The head part turned on a lathe from basswood and lightweight inside using a shaped cutter. It is installed on the glue in Vileika the cylindrical part of the container. The nozzle block also fake, it is at an angle of 30° conical drilled 12 holes, simulating the rocket nozzle of the prototype. Parachute compartment model, copying the body of this rocket is mounted on the nozzle block.
Stabilizers visquine from Linden veneer thickness of 0.8 mm for increased rigidity covered with thin fiberglass. On the surface of the tail model, carrier clip fixing MRD, stabilizers are mounted using adapters, fairings, hewed Linden and having a section 3,5X4 mm.
After Assembly the model is coated with three layers of AK-20, treated with fine sandpaper and painted. The application of colored enamels is better to start with the most dense opaque shades — a silverfish, then white paint. After preliminary finishing, and paint the model-copy of one of the proposed options. The final stage — labeling, it is easiest to do with the conversion of fonts (microslow).
Starting weight copy engine MRD 20-10-4 about 110 G.
Technical data of the rocket Cloud
Length, mm: 2073
The largest diameter, mm: 125
Housing diameter, mm: 123
Launch weight, kg: 34
Reagent weight, kg: 5,1
The motor is running, s: 12-13
Spraying reagent: 30-50
The maximum flight altitude, m: 11 500
The speed of descent on the parachute, m/s: 6-8
V. HOLGUIN