The proposed model is performed according to the scheme “duck”. The stabilizer is located in front of the wing, contributes to the sustainability planning mode. A deviation to vertical position after deployment, a simple “timer” (wick device ignites the expelling charge motor) ensures a safe landing apparatus.
The Central beam rocket hewed out of pine and has a cross section of 4X4 mm. In its nasal part of the thread with glue is attached to the spring hinges, bearing side beams of variable cross section. In addition, 80 mm from the front end of the Central beam pivotally mounted node of the beam stabilizer (pine section of 3X4 mm). In the middle of the last bound rubber band to hold the stabilizer at a predetermined angle of attack. She passed through the ring of the spring hinge and ends of cotton thread No. 10 or No. 5 with a length of 100 mm with a knot at the end. When equipped model, the pull to the tail end of the Central beam and grab the wick with a nylon thread No. 50. Hold the stabilizer in a vertical position during the transition from planning to forced descent is provided by knot in the middle of the elastics, the value of which does not allow him to slip through the ring joint. Stitched wing and stabilizer used Mylar film thickness of 3-6 microns. The mass of the rocket is 18.5 g. 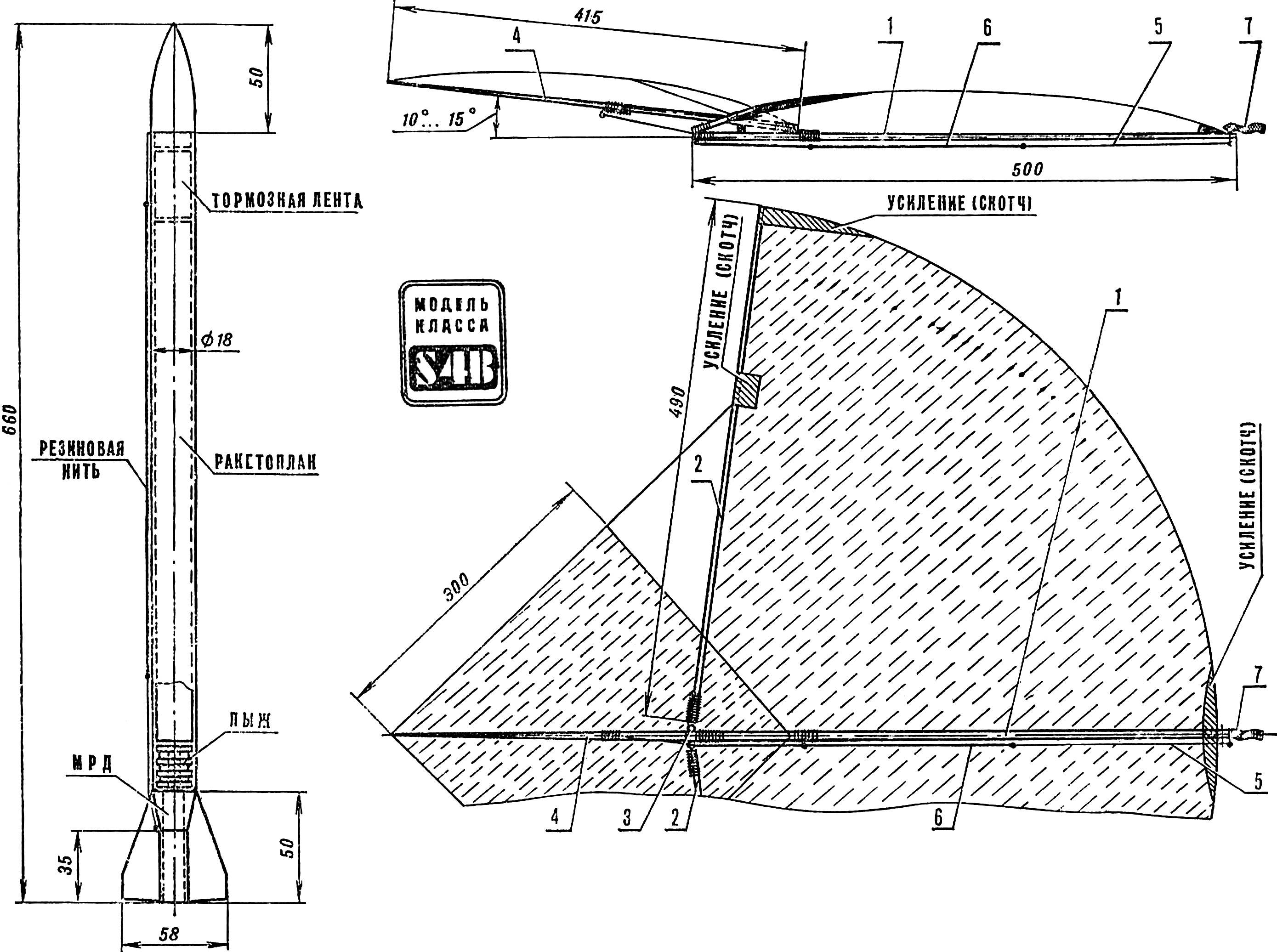 Model rocket:
1 — centre wing beam, 2 — beam wing side, 3 — spring hinge, a 4 — beam of the stabilizer, 5 cotton thread, 6 — rubber band, 7 — wick.
The body of the carrier is formed on a metal mandrel of two layers of glass, of a thickness of 0.3 mm on the resin ED-20. At the center of gravity of the carrier, equipped with exhaust MRD, attached rubber band, the opposite end of the restraint system rescue media of Mylar film with a thickness of 20 µm and fairing. The mass of the carrier 7.
Adjustment of a mode of planning is the selection of the installation angle of the stabilizer by moving wooden I-beam of the stabilizer of size 4X5X6 mm and the offset of the center of gravity of the airframe loading of the bow beam.
If the model is prepared for the start of the engine is put in the carrier, then placed the rocket plane and labyrinth separating the balsa wad with a through Central hole for the wick. After that, the beam stabilizer is unfolding ago, close to the Central beam of the wing; last-Curling and side rails, top gently wound the skin. Finally put a system rescue media and mount the fairing.
Yury BATURA, Dneprodzerzhinsk