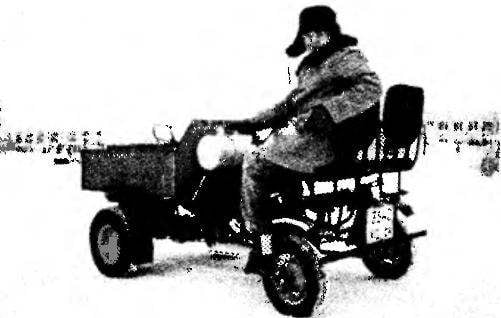 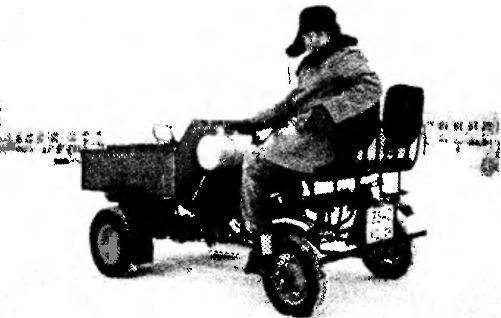 First of all, I thank the editor of “Model construction” for the promotion of ingenuity, intelligence and talent of ordinary people, for the opportunity to use his rich creative experience, focused in the magazine. Keep up the good work!
For my part, I would like to offer our readers a description of the very practical mini-truck. Practical in the sense that it is simple in structure, easy to operate and inexpensive to operate.
This is a simple vehicle designed for transportation of various cargoes and one passenger. I have long had plans of creating such a mini-truck — in the home he just needs. And when in my hands on occasion got a used motor scooter Muravey, its main components and parts has decided to base its four-wheeled cars, as against more stable tricycle. With minor revision, these components and parts (thanks to Tula engineering for the quality of their products!) allowed us to design inexpensive to manufacture and reliable in operation.
The truck, named “Pathfinder”, it’s “Ant”, converted body forward. Externally it somewhat resembles a self-propelled chassis T-16. But in contrast, has the front drive wheels. Select the layout of self-propelled chassis due to the following reasons: rear drive wheels “Ant”, becoming from the front of the truck, increase its maneuverability, and front steer, becoming rear — maneuverability. This gives you a definite advantage when driving off-road or on the close economic court.
To carry out the idea, I needed to modify regular front suspension; to produce a beam rear axle with bearing blocks at the ends; to adjust the steering wheel from the “Moskvich-412”, steering gear and ball joints from Suspension; to set the bodies of the throttle, clutch,brakes;make the seat and the dump body. 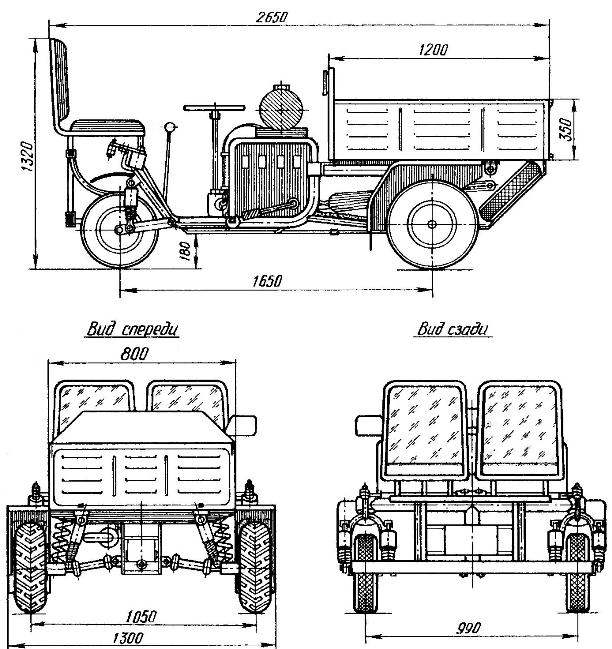 Mini truck “Ranger” (on the front floor pan with spare tire not shown). 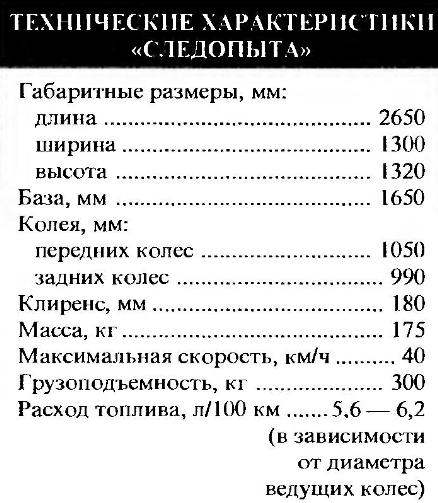 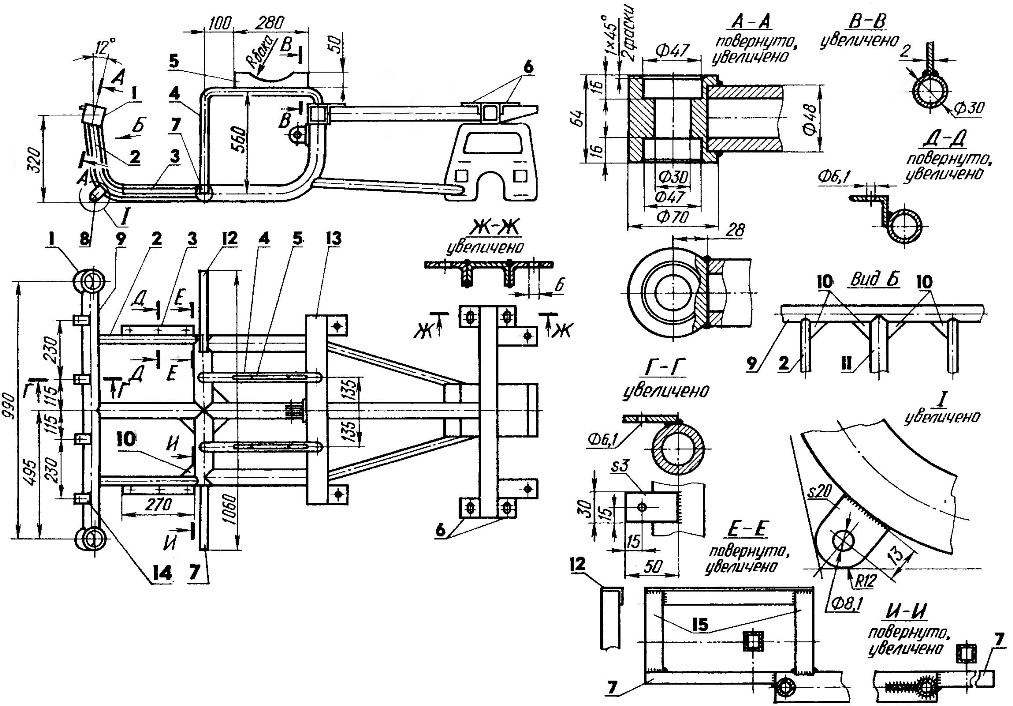 Frame scooter “Ant” and the main parts that turns her into the frame of the mini-truck, “the Pathfinder” (the rear bracket on the engine mount not shown):
1 — the pivot sleeve; 2 — cross member (tube 30×2); 3 — mounting brackets floor (30×30 area); 4 — arc still the seat frame; 5 — lodgements fuel tank (steel, sheet s2); 6 — mount the front fenders (area 70×70); 7 — console mounting floor (pipe 25x25x2); 8 — Pro – turned, increased usina fixing the seat frame (2); 9 — rear axle beam (tube 48×5); 10 — gusset plate (steel, sheet 50×50, s2); 11 — knee frame scooter, the Central; 12 — mounting bracket of the clutch pedal (30×30 area); 13 — frame of the scooter; 14 — mounting bracket of the seat frame (4 PCs); 15 — stand (pipe 25x25x2).
It took four months. The work went like clockwork, because mentally I already went to the “Pathfinder.” The finished and painted car was properly registered. However, as a… mini-tractor. This metamorphosis is explained simply: at the time I had a driving “rights” only on the tractor. However, this fact does not bother me to use the “Pathfinder” mainly as a vehicle.
“Pathfinder” is a good helper at the farm. Except Gogo, drive it for mushrooms and berries and fishing. Operate the truck mostly only in the warm season, so the cabin did not. Travelling at 100 km and much fatigue do not feel. To operate the machine easily — all controls are located directly in front of the driver. And even though the pedals are spaced a little wider than the car, get used to it.
Both the driver and passenger: the ride is soft, no wonder she’s got independent suspension all wheels. Everyone who ever rode Pathfinder, seated in the passenger seat, had, according to them, the inconvenience. Later, when the seats appeared armrests, and above them — a removable awning, the trip sounded even such a definition as “comfortable”.
In short, a mini-truck as I pleased. It should be noted his passing ability, especially when it is loaded, because the leading wheels have a broad range of the motorcycle “Tula” (tail — of the scooter). That’s just the power of “native” engine is not always enough. Therefore, before towing a heavy load you have to change motorcycle wheel motorolleri, and paired.
Body type mini dump truck, rotary. But it could be fixed. Then on the bottom it is easy to attach “the Zhiguli” chipper (engine under cover) with a spare tire — motorolleri wheel. In such a configuration the “Pathfinder” rather unusual, attracting the attention of passers-by. 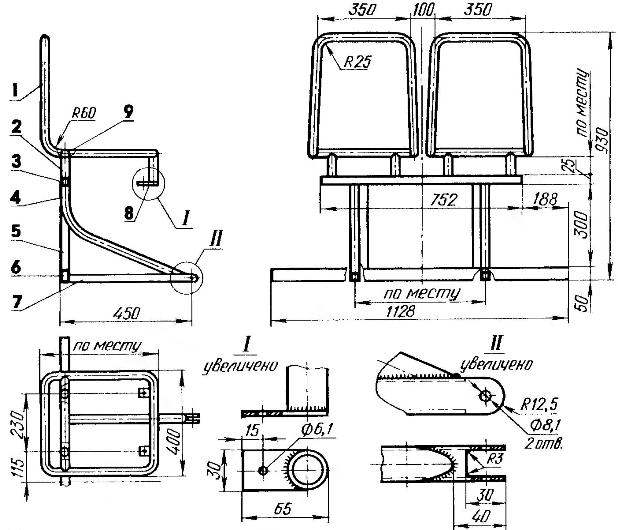 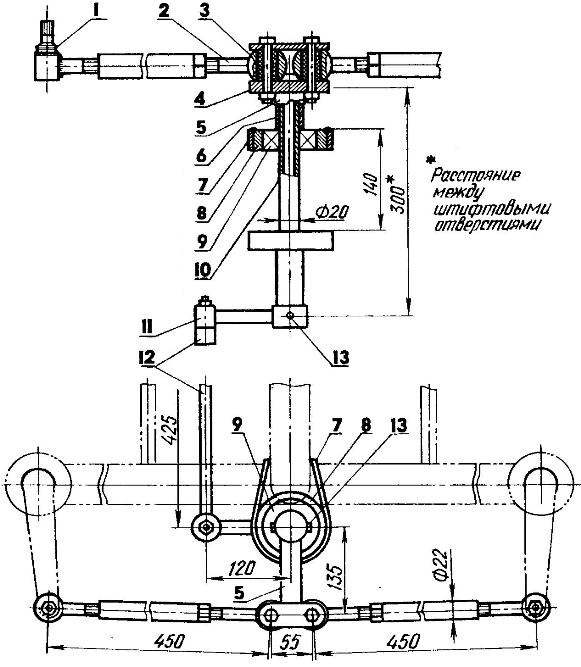 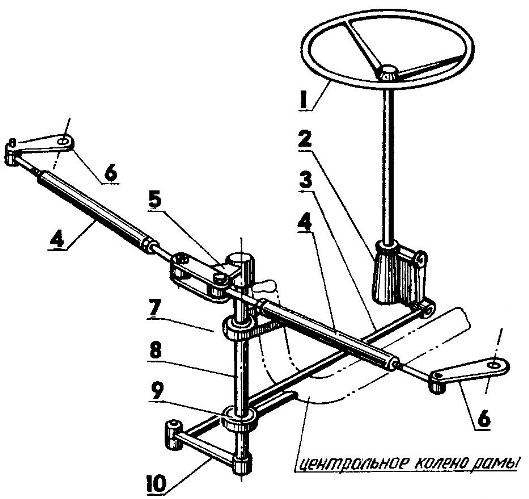 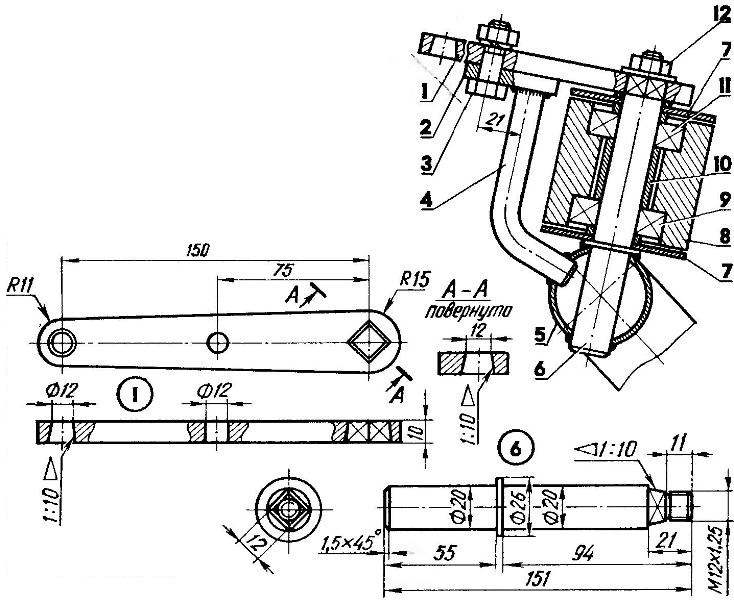 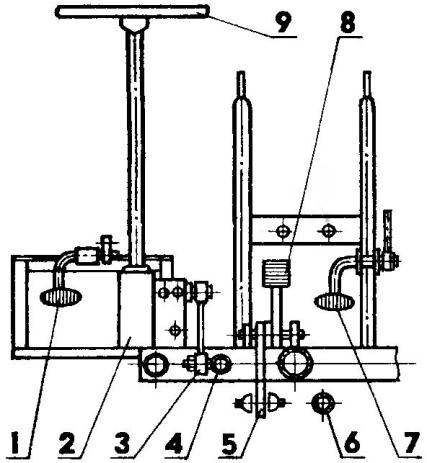 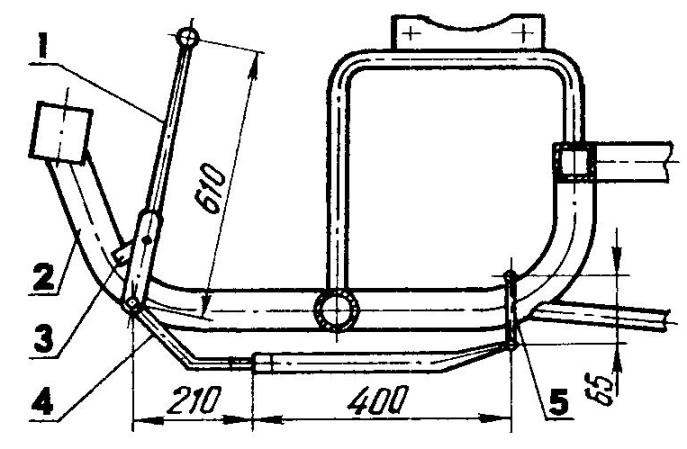 The mechanism of transmission control:
1 — shift lever; 2 — knee frames, Central; 3 — an arm of fastening of the lever; 4 — pull adjustable 5 – leash gear box (motor is not shown)
When designing a mini-truck, I was guided by the need to ensure the following: sufficient strength and structural reliability, good stability and handling, efficient braking, optimal placement of all units, functional control layout, comfortable fit driver and passengers and, finally, aesthetic appearance.
The FRAME is mini truck. It served as the frame of the motor scooter Muravey, which added rear axle beam, beams, angles of attachment of the wings and cradles the fuel tank.
REAR AXLE. It should be noted that the rear axle is one of the most loaded nodes design minigruzovikov. The successful opposition to the alternating torsional and bending loads rear axle beam needs to be rigid and strong and made of thick-walled pipe. She fixed on the former site of the steering column “Ant” (at the end of the main knee frame) and reinforced by two gussets.
In addition, the right and left the beam to the back of the bar, repeating the bending of the Central frame knee “Ant” (the latter is important in order for the Polycom to the legs of the driver and passenger were smooth). The bottom yokes have the eyelets to attach the seat frame, and on the sides of the mounting bracket Polycom.
Technological subtlety: I-beam rear axle I was attached to the frame Assembly with suspension — forks, shock absorbers and wheels. First picked up I-beam welded to the Central knee, and then, holding her to the frame and finally decided on the size, welded it to the elbow and Travers.
The angle of inclination of the pivot bushings 12° due to the use of wheels with size of 6.70—10″ — leading and of 4.00—10″ — slave. With this angle, the plane of the frame of the mini-truck parallel to the road. The angle can and should be changed in the case of using four wheels, the amount of 4.00—10“.
As the rear suspension used a modified front suspension two motor scooters “Ant”. Revision was reduced to the replacement of pin and fork connection to additional knee, reinforcing the connection of the plug with the rotating lever.
To the beam rear axle of its four upper brackets is attached to the seat frame with seats the driver and passenger. The two lower brackets (loops), this frame fits with eyelets traverse.
FRONT AXLE, let me remind you, the presenter. To him include: reverse gear, suspension, springs, shocks, axles, brakes – all from the “Ant”. With a few modifications, these nodes are located in the same places under the body.
ENGINE mini truck “native”, the T-200. Power it by installing a head with reduced combustion chamber is increased to 14 HP Instead of the regular ignition system is applied “magneto” to facilitate service of the power unit. The motor mount to the frame by the same. 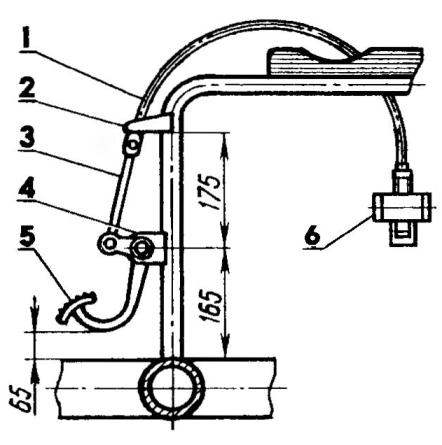 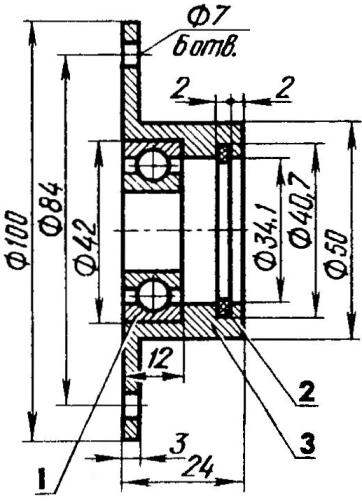 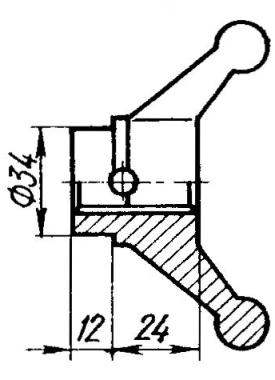