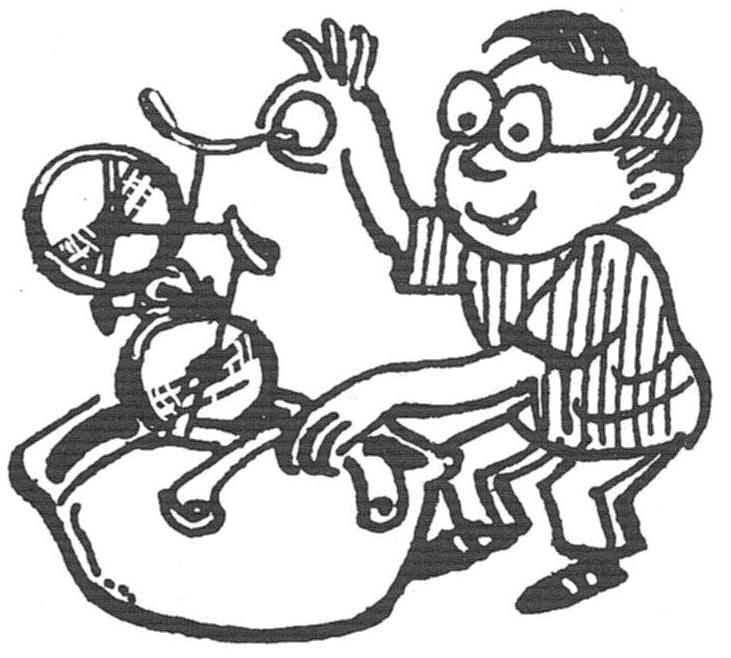 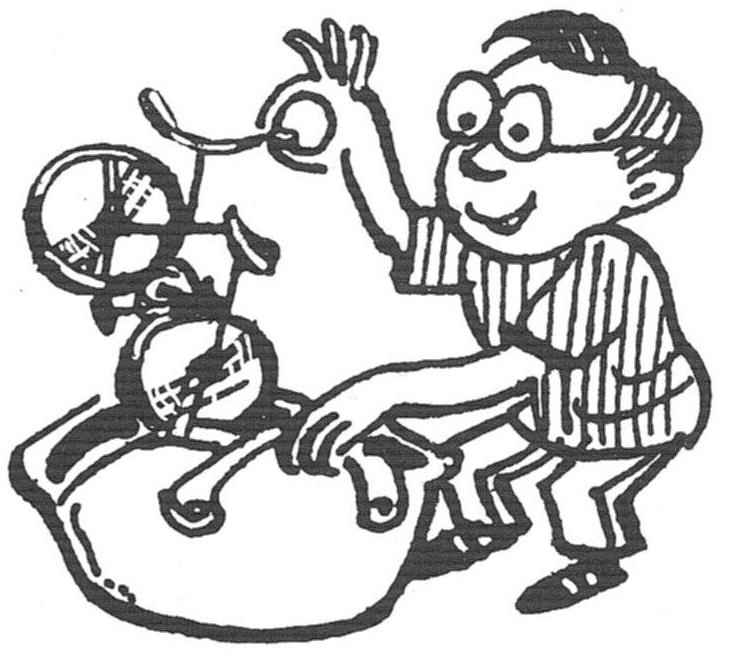 Folding bike nowadays. However, its dimensions even when folded great, and to keep it at home and even more to transport on the bus or tram is not always convenient.
Moscow engineer I. Sorokin has set a goal to develop a convenient folding bike smallest possible folded size. The outcome was a two-wheeled machine which after the transformation is placed in the bag with the dimensions 650x450x150 mm.

The frame of the bike – spinal type, it is bent from tubes with external diameter of 40 mm and a wall thickness of 2 – 2,5 mm. the Front frame is semimonthly node, consisting of two shaped 3 mm steel plates. To the frame plates are attached by welding. The holes for the hinge and the bolt retainer are drilled in the plates and is cut after welding. On the opposite side of the cap tube is welded to a bearing unit of the drive sprocket – the body of the carriage. Next to the slide to the frame is welded to a fixing device by which the rear fork is securely joined with the frame.

Front fork resembles a flattened 180° plug moped. It consists of stationary and rotary parts. Turning part – the bike steering column and two pens, each of which is welded two pipes telescoped into the other. The ends of the feathers flattened and serverlists holes in accordance with the diameter of the wheel axle, your chosen bike. The steering column is welded with feathers by means of two bridges -plates from a sheet thickness of about 3 mm is drilled into them holes under the column and feathers. 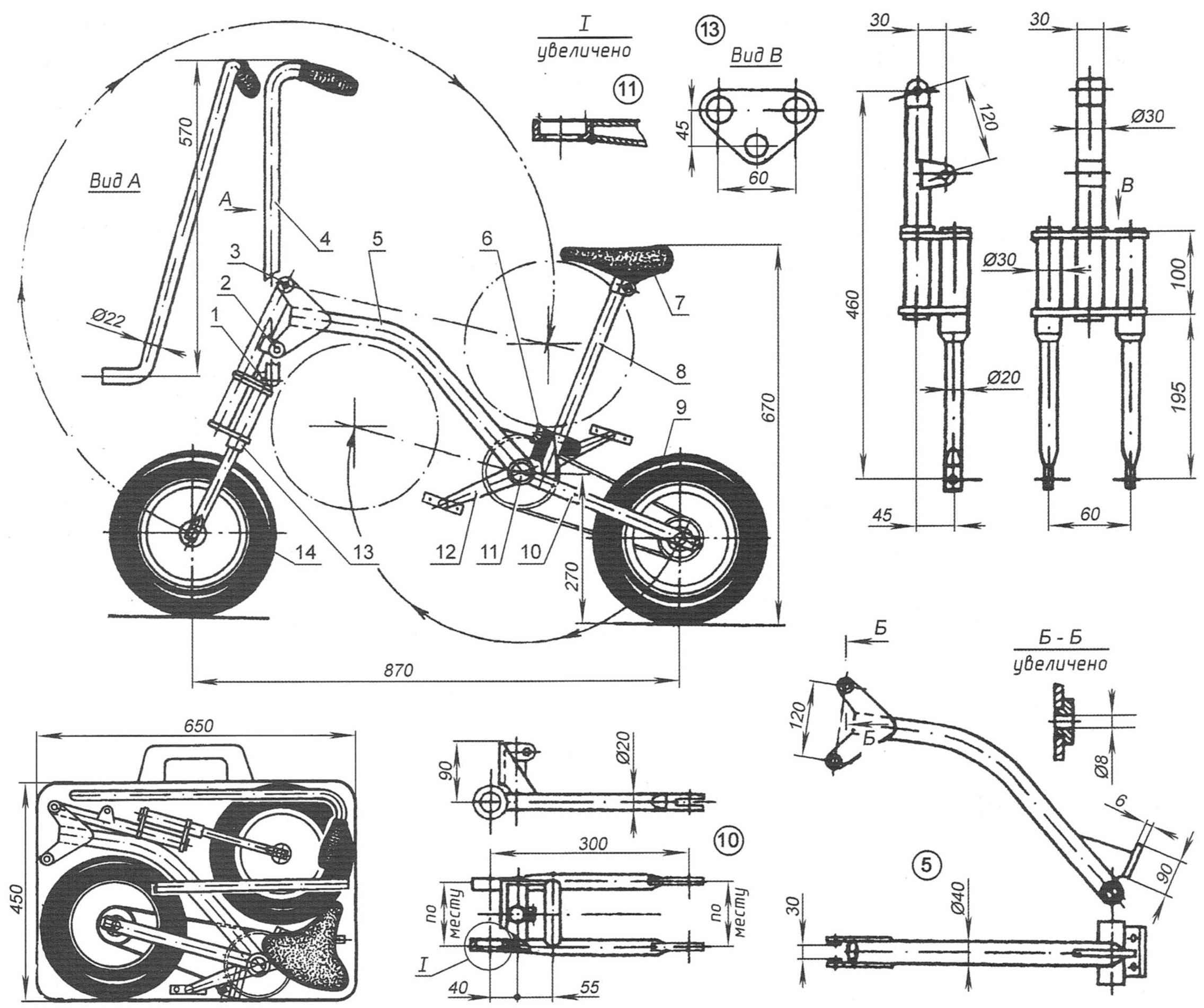 On the top bridge of the front fork are secured two collars, which secure the half-arches the helm-they can bend their own sheet of steel or purchased at stores that sell parts for mopeds and motorcycles.

Rear fork is welded from two feathers – cuts steel pipes with a diameter of 20 mm with a wall thickness of about 2.5 mm. In the rear part thereof are welded two notched steel plates 3 mm thick with longitudinal groove – they fixed the back wheel of the bike. The front is welded on the two steel rings together with the carriage performs the function of a hinge. Right and left feathers are joined into a single welded node using two tubular cross-members. Interestingly, swivel rear fork and the frame is solid. It is better to perform as follows: to begin prepare the right and left feathers of fork – that is, the pipes are welded to the ring joint and the notched plate. Further, the feathers are mounted on the carriage and is temporarily connected with a piece of wood and ties of steel wire. Carefully check the operation of the hinge – frame and the rear fork should easily rotate relative to each other and not have a big backlash. Next to the feathers fitted to the crossmember and primatyvajutsja two or three welding points. Removing the wire tie and removing a wooden block, make sure the hinge and finally weld the joints node.

The handlebar consists of two poludov, fasten the two clamps on the top bridge of the front fork. For steering wheel suitable thin-walled steel pipe with a diameter of 22×1,5 mm.

The ordinary saddle, bike. The seat tube is elongated, its length is about 400 mm. Fixed it split the pipe, which is welded to two “ear” with a hole diameter of 8 mm.

Assembly. First attach to the frame and the rear fork fixing device. It consists of two mates connected when folding Bicycle in the operating position with two bolts and wing nuts.

Folding bike is made as follows. First, wing nut turns with the bolt-retainer, fixing the front fork in position. Also disconnected half-arches of the steering wheel and removed the saddle. Further, the front fork is rotated clockwise until it stops. Then turn the wing nuts of the Central retaining device and rotated clockwise until it stops rear fork. The saddle is detached from the seat tube. Pedals are turned out and are screwed from the inner side of the levers. All parts and assemblies of bike freely placed in the same suitcase. The Assembly and disassembly of the bike takes no more than ten minutes.