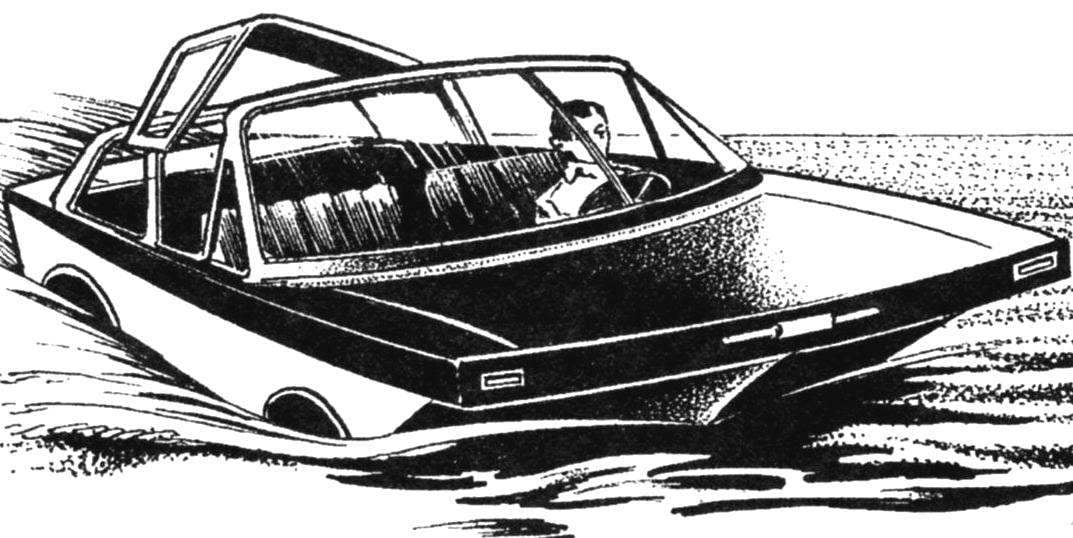 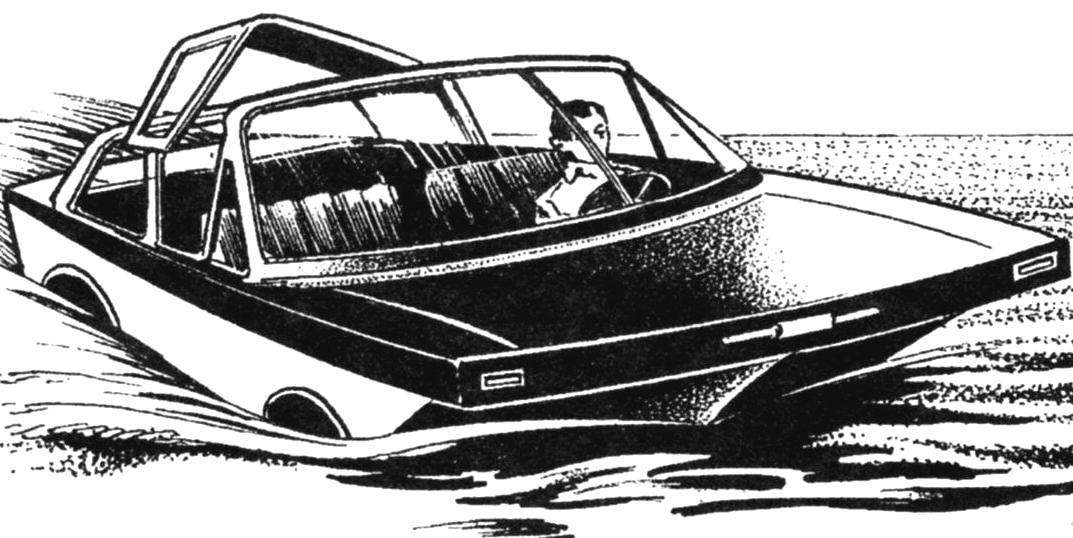 This boat has always caused the attention of vodnomotornikov. Some were attracted to him emphasized the car appearance, painted on the sides of the wheels. Other interior comfort, decent speed, maneuverability and controllability. Well, hobbyists and tinkerers, in addition, was interested in the construction and manufacturing technology of the body, could not be better focused on work in the home workshop.

The boat has very good lines, copied from the common boats of the “Boston whaler”. Experience shows that the boat in this shape easily enters the planing with one engine of the “Whirlwind-30”, and sustainability is such that even two people standing on the side, not able not only to turn over the boat, but even essentially to Bank it.
The ship has an indoor cabin, virtually no different from a car. Access is through two doors, opening to the input and output sides and the ceiling of the body.
The technology of making the case is simple. However, it requires a fairly large amount of foam, any brand – for example, construction.
The hull consists of two parts, upper and lower. But, in principle, it can be molded and integral. We must start with the bottom. Frames for her cut from 12-mm plywood in accordance with the theoretical drawing. The second and the sixth frames is closed: after you cut both sides of pasted plywood with a thickness of 3 to 4 mm of filling the inner part of the foam.
The frame is assembled upside down on a level floor. To do this, it is plotted as DP (different – symmetry plane) and axis location frames. Next on the floor fixed frames: bottom – wooden bars, fixed with small nails, and the top – rails and a few soft safety wire. We must try to more precisely set the frames for what you should use, for example, a plumb. 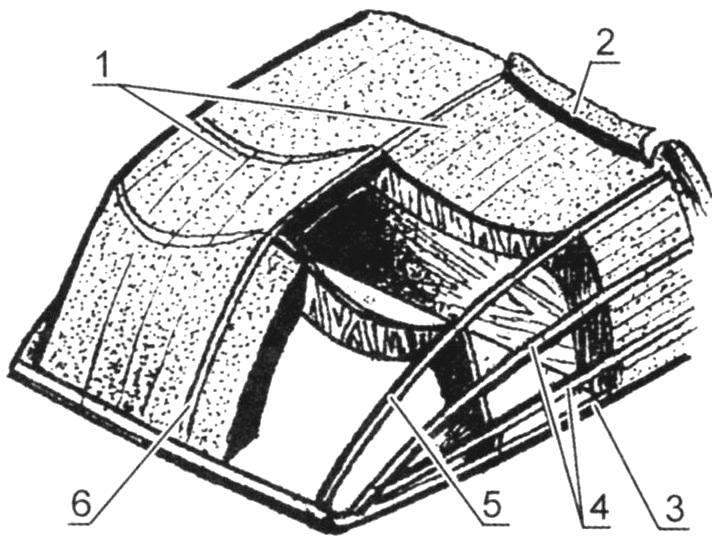 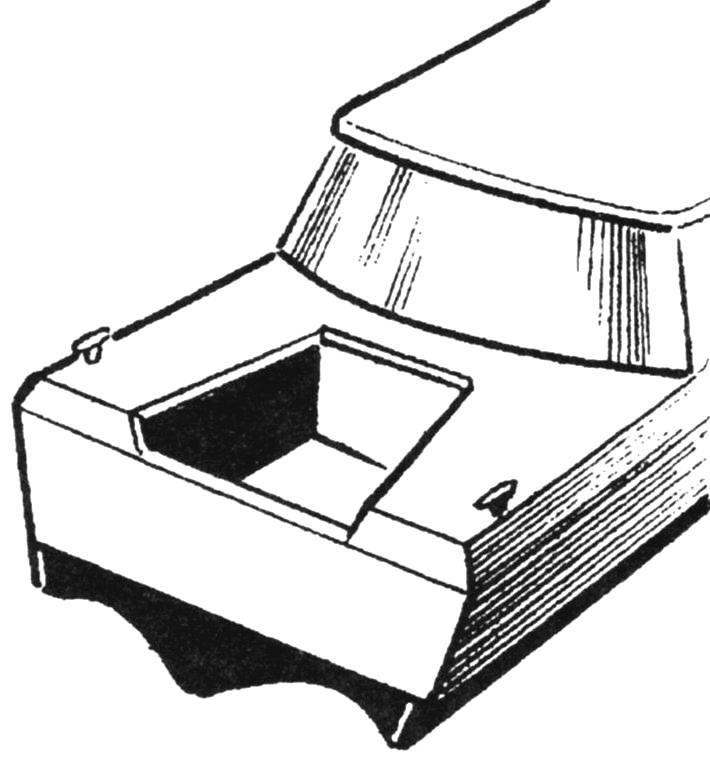 The scheme of formation of the hull form:
1 – foam filling; 2 – glass; 3 – elements of the base frame; 4 – set of longitudinal frame; 5 – lateral keel; 6 – Central keel
Now prepare a set of longitudinal body rails with cross-section 20×20 mm, 20×30 mm and keel – 30×30 mm. Adjustment of the slats is provided in the place; they are fixed to the frames with epoxy glue; temporary fixation to polymerization of the adhesive on the locking wire. For curved rails (in bow) take advantage of the easiest slipway in which you can fix the steaming rack: drying up, it will take the form of this staple.
After alignment of the frame (as the shipbuilders – malkivka) spacie (area between frames) are filled with foam blocks. For cutting them it’s best to build a simple machine in which a work tool is the glow current to the nichrome wire (power heating element via a step-down transformer).
Do not try to just seal the whole hull with foam. Frame it and pre-processing it is more convenient to consistently. For example, to paste two or three longitudinal belts of the foam after curing of the adhesive to treat them inside and out, focusing on the elements of longitudinal and transverse set, and then glue the belt. Revision of blanks of such a specific material such as foam to help sharpened to razor sharpness of the cutters of different shapes. You will need a long flat knives like kitchen, wedge type Shoe, long, bent in the form of an onion blade. Some types of foams are well processed and a plane, a piece of iron which is at an angle of 45° (if you look at the bottom sole of a plane) to the longitudinal axis. Of course, this instrument pilot needs to be sharp as the razor.
After processing the case and, if necessary, vysalivaniya outer surface is glued with fiberglass. For this it is best to use stekloprokata (two or three layers) with subsequent finishing pasting two layers of fiberglass satin weave. It is recommended before the finish pasting to finally level the surface of the hull with epoxy putty. All three keels have the sense to lay a few strips of fiberglass -these places are especially prone to intensive wear during operation. 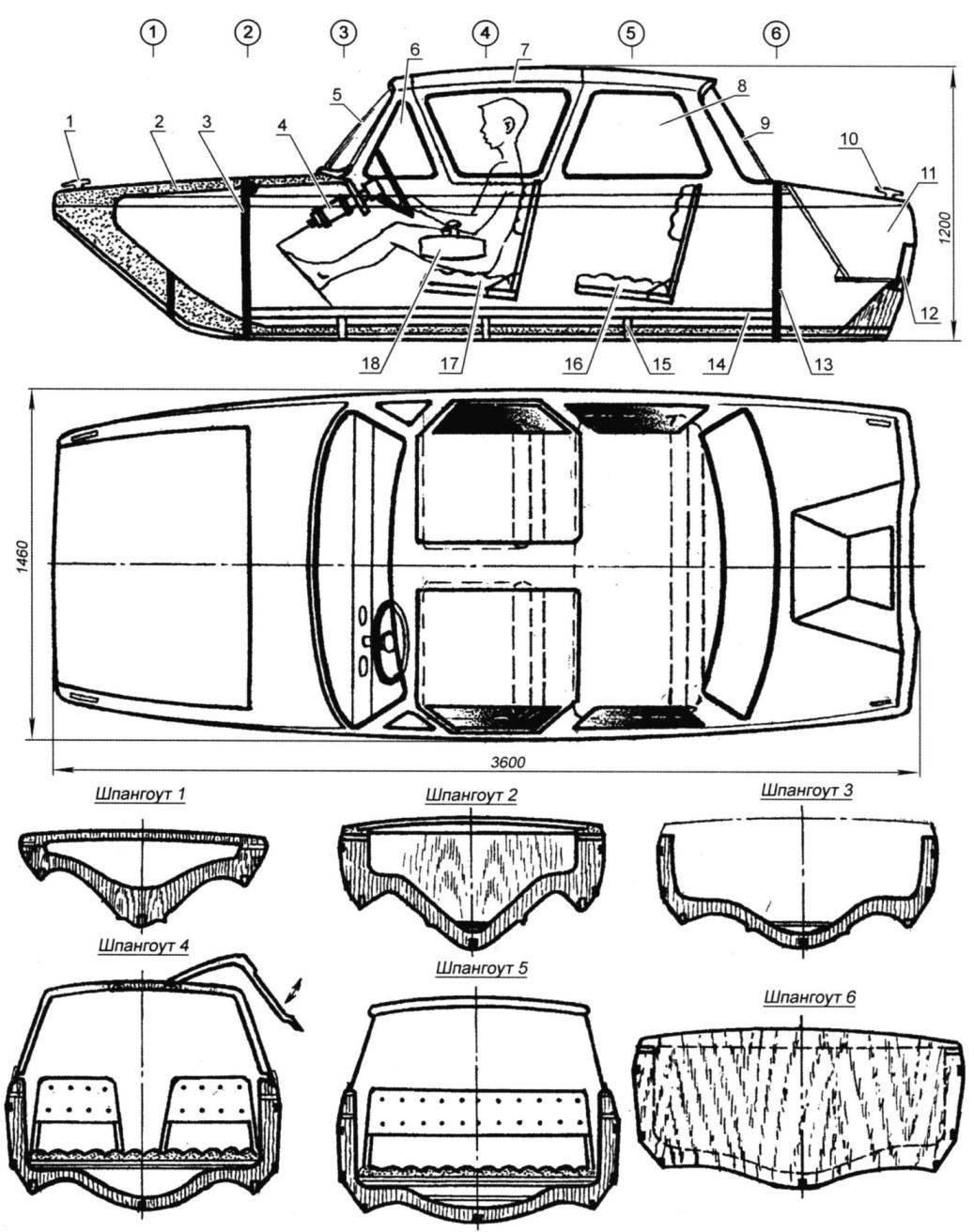 Quadruple cabin boat with a hull of the type “Boston whaler”:
1 – mooring bow-duck; 2 – cover the front of the trunk; 3, 13 – watertight bulkheads-transverse frames; 4 – steering device; 5 – windshield; 6 – side front window; 7 – lifting door; 8 – side rear window; 9 – rear window; 10 – mooring stern duck; 11 —drawer sub niches; 12-transom Board; 14-Elan; 15-frame; 16 – passenger rear seat; 17 – the front seat; 18 – remote control engine
The final finish of the hull can be substantially alleviated if the use the following method. After gluing fiberglass, without waiting for curing of the binder, the body is leveled with putty (also epoxy), and then superimposed on top of the plastic film. This must be done so that between it and the surface casing was left with air bubbles. After that the case “is smoothed” it with your hands or a rubber “float”, reminiscent of large spatulas. After polymerization in this case is almost finished, polished case, requiring only minimal processing. Especially good so you can decorate concave, and saddle surface of the housing, for example, the areas between the keels. The film thus initially strongly stretched in the longitudinal direction and fixed in the front and rear housing parts, and then to a lesser extent – in the cross.
Final finish includes a primer housing, leveling putty, and applying Vykurovanie “processor” layer of paint, which helps to identify surface defects.
The next stage of work – making the top of the boat. It should be noted that its size and shape largely depend upon components of the finished product will be able to choose the cabin design. In particular, the size of the glass used. Of course, the use of organic glass will build a salon of any size and shapes, however, it is more rational to base the road – for example, the rear window of cars (they are cheaper) for suitable brands. That is why the construction of the upper part of the body should begin with the manufacture of the frames under the front and rear glass. The easiest way to applied to the wall them from 3 mm plywood. To do this, cut strips of the required width and of them directly on the glass and laid out the frame. Strips primatyvajutsja to glass clamps, resembling clothespins or small clamps. The total thickness of veclachi about 20 mm.
Installation upper part of the body is made from plywood and foam. To start, set the frame front and rear Windows, two inclined frame forming a box liftgate (12 mm plywood), and two roof rail (rail with a thickness of 20 mm). All these elements are assembled with epoxy adhesive and screws. Frame front and rear side Windows are also laminated plywood.
Doors are assembled from plywood and foam. Each frame consists of two frames of 12 mm plywood and three cross-beams – pine slats with a thickness of 20 – 25 mm. At the top of each frame which are stuck to the rigidity of the diagonal elements. The space between the elements is filled with foam, the surface inside and outside is aligned and glued with fiberglass.
The surface of the upper housing part is formed exactly in the same way as the bottom: space between the frames is filled with foam blocks, processed and glued fabric.
In the back of the case is glued to the box the sub niches. You can do it by a molding of fiberglass on the boob, but easier to cut out elements of hardboard or plywood “stitch” them with safety wire and the junction to seal the strips of fiberglass. It is glued and subsequently the inner surface of the box.
Before you attach the top and bottom of the case, they should be treated from the inside and to hang two layers of glass. Connection is made with glue and screws, followed by the gasket outside and inside with strips of fibreglass. 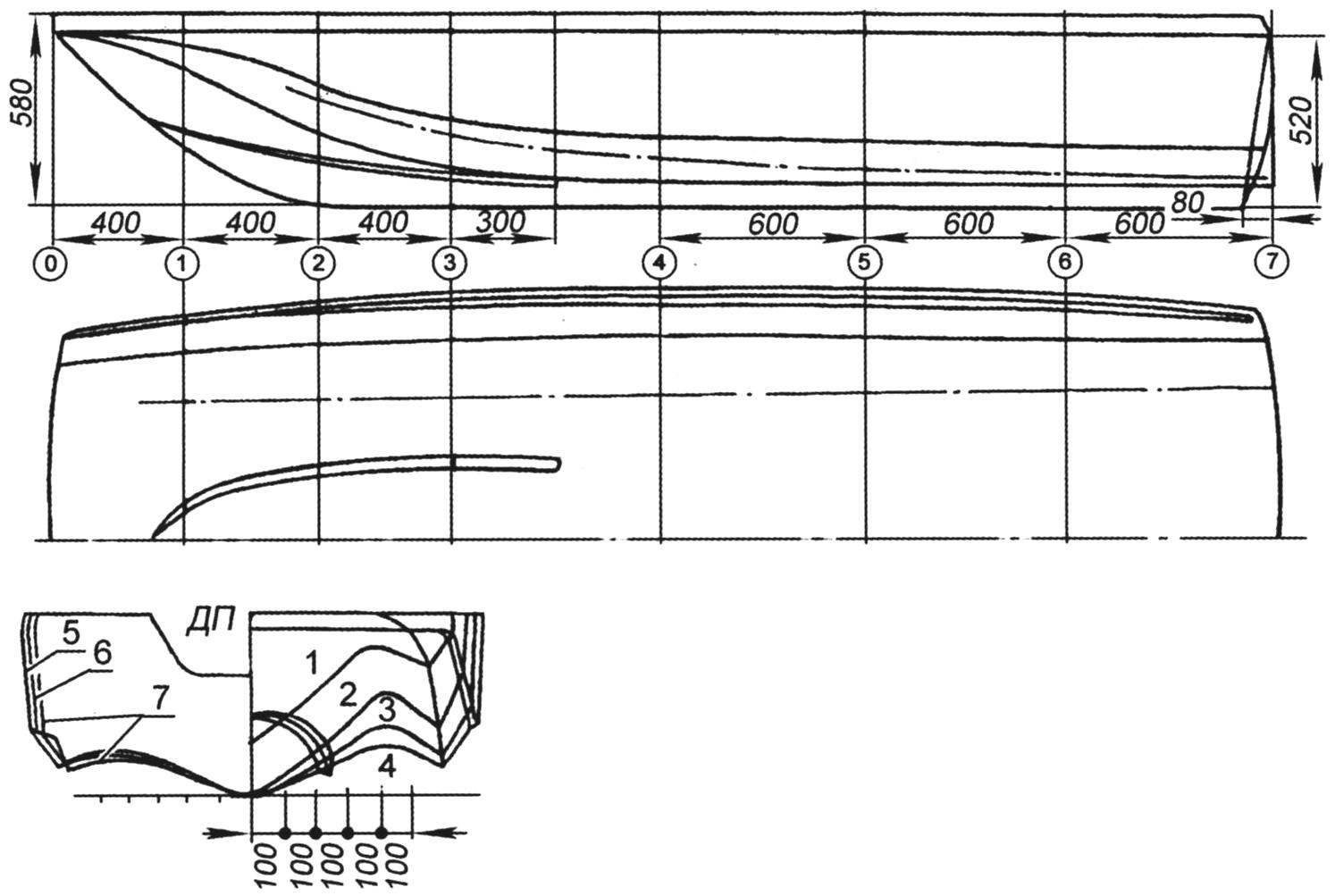 The theoretical drawing of the hull of the boat
The frame of the upper part of the body of the boat:
1,9, 10 – elements of base frame; 2 – tappet; 3 – frame front glass (plywood plywood); 4 – the instrument panel; 5,7 – frames door frame (plywood s12); 6 – roof rail; 8 – rear window frame; 11 – rear cross member; 12 – kerchief; 13 – longitudinal forming box lid; 14 – reinforcing solitaire
Front cover trunk and doors hung with conventional hinges used for hanging frames. For fixing the door in the open position is used a spring-lock-stopper. And doors, and trunk lid have a rubber seal that prevents the penetration of water into the housing.
Cabin boats – two semi soft sofa, designed for the driver and three passengers. The front sofa has a split backrest, pivotally mounted so that both can be tipped forward allowing the exit of the cabin passengers, located on the back of the couch. Back seat single, she also leans forward, opening access to the rear trunk.
Frames seat and back – wooden slats, covered the 4-mm plywood. Cushion – foam and artificial leather.
Remote control – standard, one of those that can be purchased in sporting goods stores. It consists of “wheel”, rope drive and engine control.
Inside, the cabin is trimmed with faux leather, equipped with a ceiling canopy. Body outside painted with automotive enamel air drying.
On the deck – front and rear – four fixed cleats for securing mooring. If you intend to use the boat for sailing at night, you need to install the running lights. Not be amiss and is fixed to the roof of the searchlight.
I. MNEVNIKI