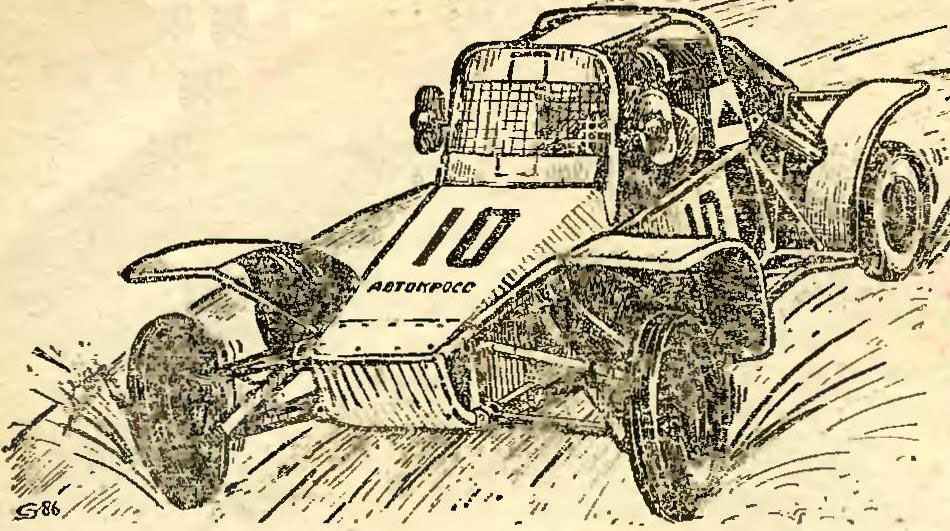 Student design Bureau Carian Polytechnic Institute named after A. M. Gorky is known not only in redkach edges, but also far outside the Republic. The original snowmobile, transport on an air cushion, knapsack aredigital and other developments, which are not repeatedly described in “M-To” attract the attention of specialized organizations.

SKB has been around for almost a quarter of a century. Today is a great scientific and experimental unit of the Institute where research is being conducted on a number of topical issues, and most importantly, CSC provides a massive attraction of students to scientific-research and experimental-design works. Now there were seven groups, each developing “its” subjects.

Organized 4 years ago, CSC-7, specializing in the design, manufacture and test of sports dirt buggy, is the youngest student Association of the Institute. The first two machines with the brand of MPI was born in the spring of 1984 and immediately took a successful start: year Polytechnic V. Shcheglov, and V. Yershov took a number of prizes in the biggest competitions of the year. The victories won in many of the identified successful design of machinery — that was embedded in their scheme is still under design. To tell about the buggy MPI we asked the head of SKB-7 Vyacheslav SHCHEGLOVA.

5 — protective frame of the power unit,

Common technical requirements and design experience of many collectives, logically had to lead to some “ideal” schema buggy. But hardly any among the arrivals at the start of cars, and today you will find two of the same. And no wonder: each team, if it is truly creative, something inherent in his own, special, and capabilities are different.

We hope that our experience will be useful primarily to young athletic teams. According to the existing classification buggy MPI belong to the 1st class and constructed out of available units and units included in the kit supplied DOSAAF. This power unit allows you to design the perfect motocross machine. The rear location provides a loading of the drive wheels, which is very important for a vehicle of this type. No boost engine, no reduction of the total weight of the structure is not appreciably alter the dynamics of dispersal, if not a firm grip of the drive wheels with the support. But overloading the rear axle impractical: will become worse handling and longitudinal stability due to the weakening grip of the front wheels with the road. Our cars weight distribution on the front and the rear axle was 40 and 60%. This ratio, according to our calculations, are close to optimal. In addition, the rear engine mounting has allowed more convenient to place the driver than the buggy with classical transmission. The seat is placed exactly along the longitudinal axis and in accordance with the selected weight distribution is shifted forward. In this situation, the driver controls the machine precisely, and on the turns with drift — moves to a smaller radius. 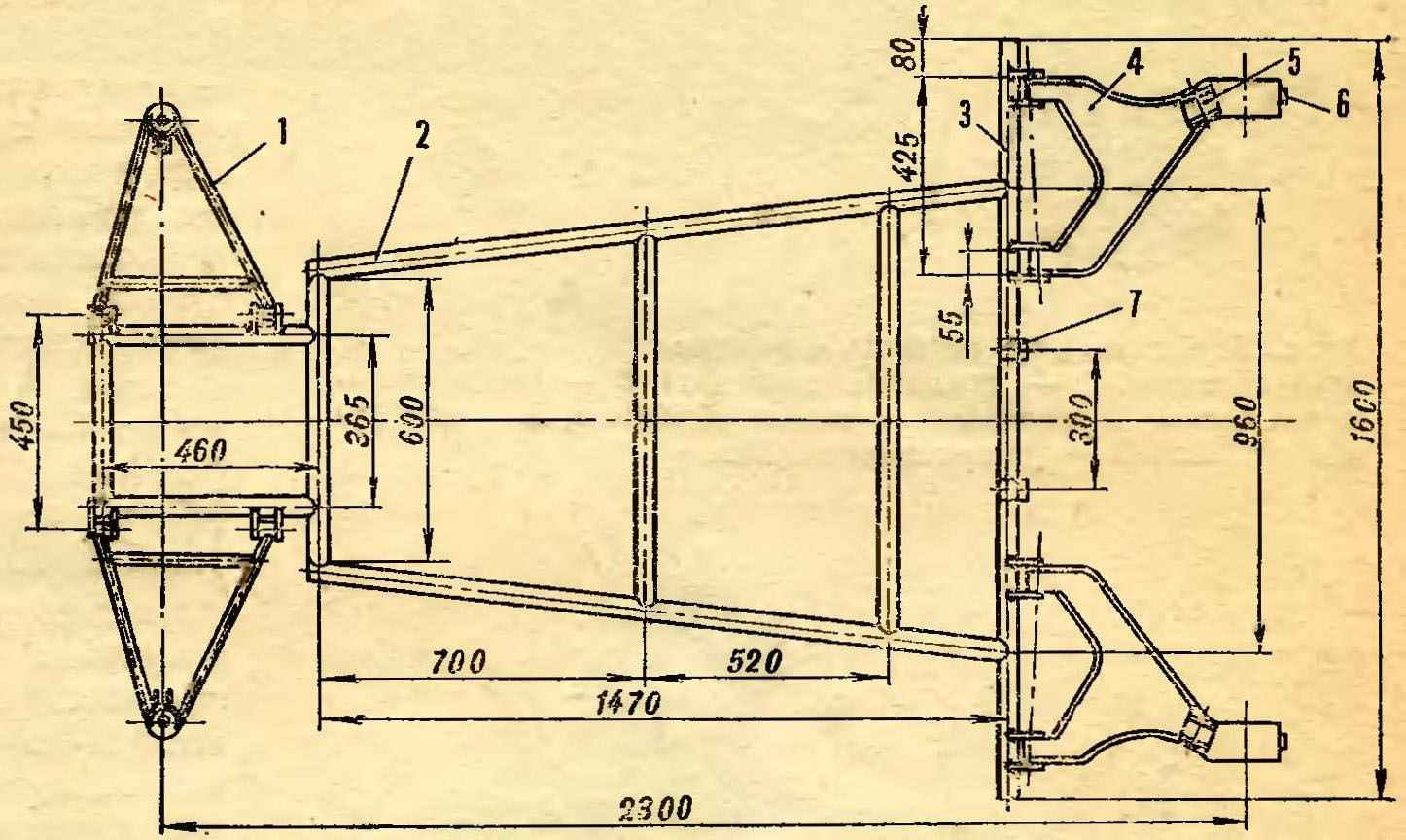 Fig. 3. The frame is in frame with the levers suspensions:

5 — bracket of the shock absorber,

Frame is a welded tubular frame. In its manufacture was used the pipe from available structural steel: main frame, roll over bar and main load-bearing elements suspension beam — pipe size 42X2,5, side protection— 35X2,2, and on the other, less loaded elements (protection powertrain, bumpers, brackets of the wings) — size 32X2.

The Assembly of the frame begin from the bottom of the frame. In front to its short longitudinal trumpeter welded brackets front suspension lower arms and to the cross beam on the opposite side— brackets rear suspension wishbone arms and the lugs of the front support of the power unit. From the geometrical precision of the Assembly of all elements of the lower frame depends on the work of the chassis units, so that welding lead on the stocks of steel channels. Then to the frame are welded two U-shaped arc security. United on the upper and middle levels of the longitudinal pipes and the bottom cross, they form a rigid frame. The front part of the frame has a wedge shape. Its dimensions allow to place the steering gear control pedal and fuel tank. On the low racks of this part of the frame welded brackets upper front suspension arms, and between them on rail — supporting lugs of the shock absorber. Part of the frame behind the rear arc of security serves for securing and protecting the power unit. 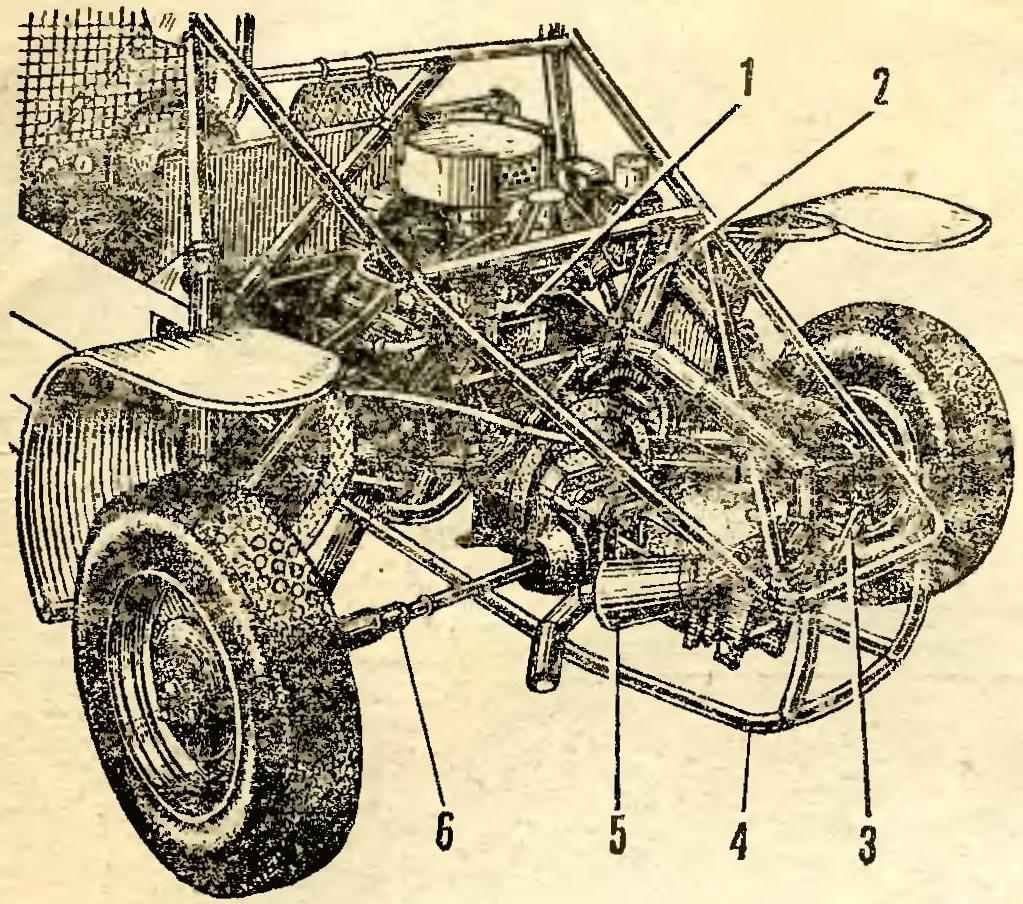 Suspension — independent. On the front triangular wishbones, welded steel tube 28X2,5. The lower arms are reinforced with longitudinal bar and have a bracket for the shock absorber. Installation to the frame via standard rubber silent blocks. Ball joints and steering knuckle “Zhigulevskoe”, but the axle knuckle machined to the dimensions of the axis “Zaporozhets”, as this car is taken on the wheel hubs.

The rear suspension is mounted on a standard trailing arms ZAZ. On their ends welded reinforcing steel plate with a thickness of 4 mm. To fasten the bracket of the shock absorber eyelet and connect the strap limiting the maximum stroke of the lever.

To the chassis dirt car high demands. The main objective of suspensions is to ensure maximum contact of wheels with the ground in heavy traffic conditions and to effectively extinguish arising fluctuations. Buggy MPI levers front and rear suspensions equipped with hydropneumatic shock absorbers of aircraft type that provides operation with a maximum stroke 240 mm front and 300 mm rear wheels. But quite satisfactory here are more affordable spring-hydraulic shock absorbers with coil springs from the front suspension ZAZ and shock absorbers from trucks. 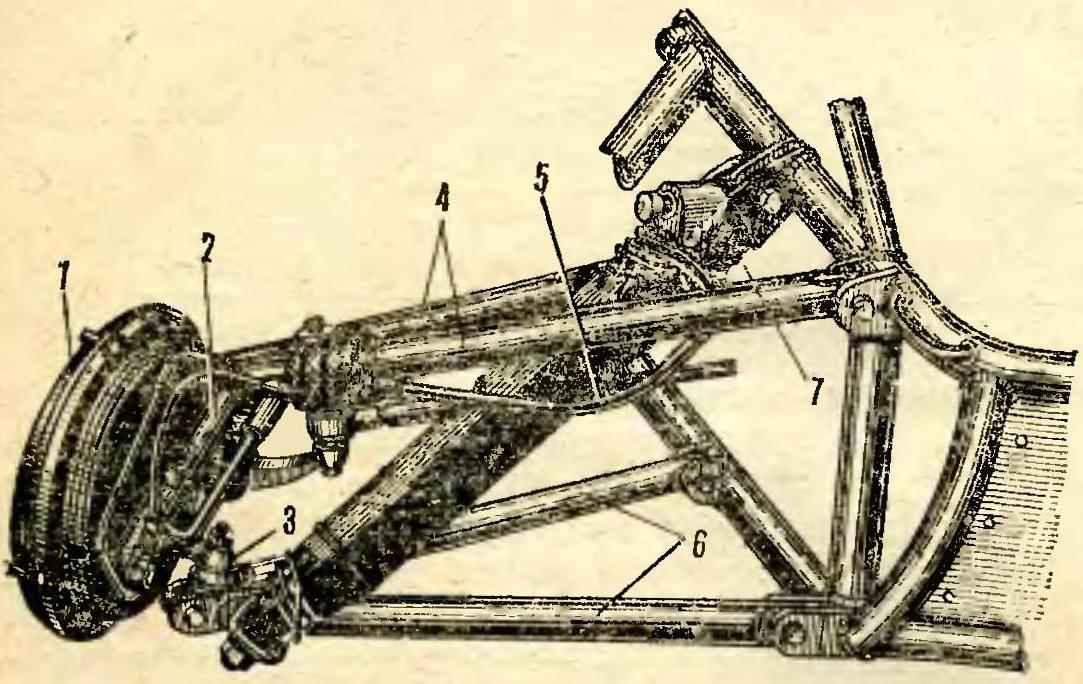 The steering mechanism is rack and pinion. It is lighter and more compact than the worm, has a smaller ratio (1 : 10) and therefore more comfortable for a sports car.

The engine of the ZAZ-968 the standard capacity of 40 L. E., but it can be increased by 30-50%. Techniques boost standard. Pistons with connecting rods adjust by weight. Balance crankshaft with flywheel and clutch Assembly. Improve filling of the cylinder with a combustible mixture. For this purpose the inlet and outlet channels in the cylinder heads and the nozzles thoroughly cleaned and polished. The joints of the joints of the head with the manifolds checked for the absence of “steps”. Used on ZAZ-968 carburetors are advised to choose DAAZ-2101-20 — it is easier to adjust. Set it to slightly rich composition: to operate the engine without the “failures” and quickly spun. Should pay attention to the air purification system, controlling the condition of the air filter element vases. When the competition in dry weather it quickly clogged with dust and degrade the performance of the power system.

Another reserve forces engine tuning exhaust system. It is known that resonance phenomena in the exhaust pipe can be used to improve scavenging of the cylinders from the exhaust gas. This is done by selection of the dimensions of the exhaust pipe. Our car successfully applied one of the ways you type “four in one”. It is calculated by the empirical formula and refined empirically. Details about this can be read in books: M. M. Nazarov Special motocross buggy. M., DOSAAF, 1980; Morozov K. A., Chernyak B. N., Sinelnikov N. I. Features of working processes of high-speed gasoline engines. M-, 1971.

The standard transmission for the marshalling of the car. Fourth gear in the race to use almost not necessary, and the interval ratios between the second and third too large. Therefore we set the third gear instead of fourth, and is the third — improvised spur gear pair. The advanced box has the following gear ratios: 1-3,8, II—2,118, III and IV of 1.75 — 1,409. 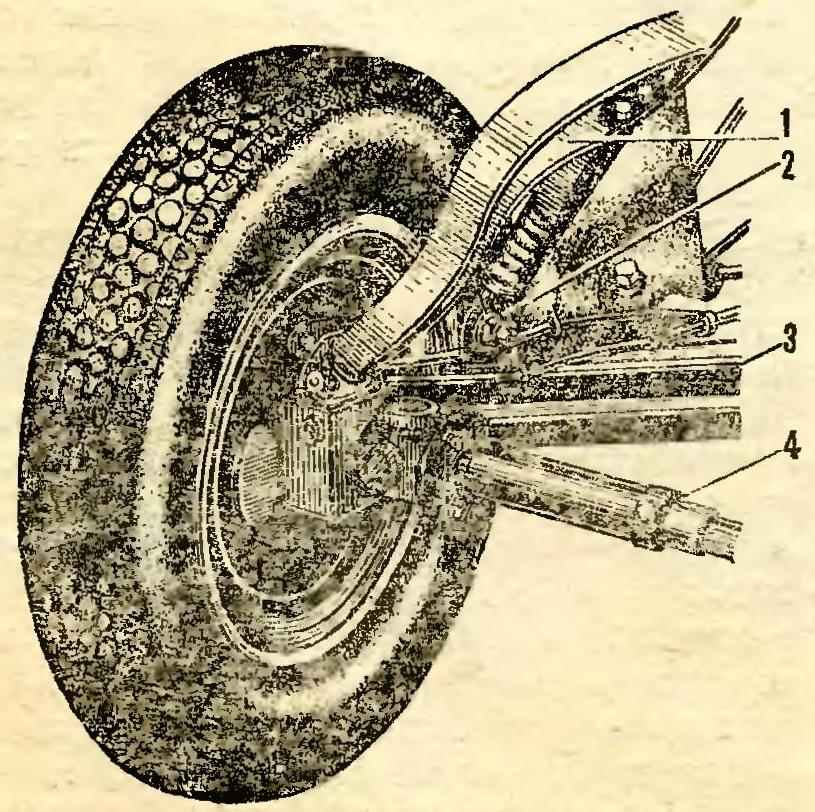 2 — bracket of the shock absorber,

The wide track improved the stability of the machine, but was forced to lengthen the axle shaft. That they at the lowermost position of the levers did not come out of gear with the main gear, move the levers suspensions limited durable canvas straps. The same limiters installed in the front suspension.

Rims, hubs and brake shields “plows” are used without changes. Tires — either from “Volyn” (LUAZ), or special — NK-9. The latter provide reliable traction when driving on dirt and good self-cleaning, but PA a dry coating require more driver skill: due to reducing the footprint the machine somewhat worse “holds the road”.

The covering frame dural leaves has not only a decorative and protective role. It also serves as the power element of the design. The leaves covering the driver’s compartment, sides, front and rear walls and the bottom are attached to the tubes of the frame by aluminum rivets. This increases the stiffness of the frame. The thickness of the sheets of sheathing on the bottom 1.5 mm, side 1.0 mm, other elements made of sheet 0,8 mm. For greater rigidity of the sheets Sigulda. To connect the sheathing on the studs longer and harder than bolts, but the mount is more reliable and not work loose from the shaking. Bolt-on mounted to its tubular frame, only the covering of the wings: it is more important than ease of repair or replacement for accidental damage. For the same reason made removable tubular bumpers fixed along the sides of the machine.