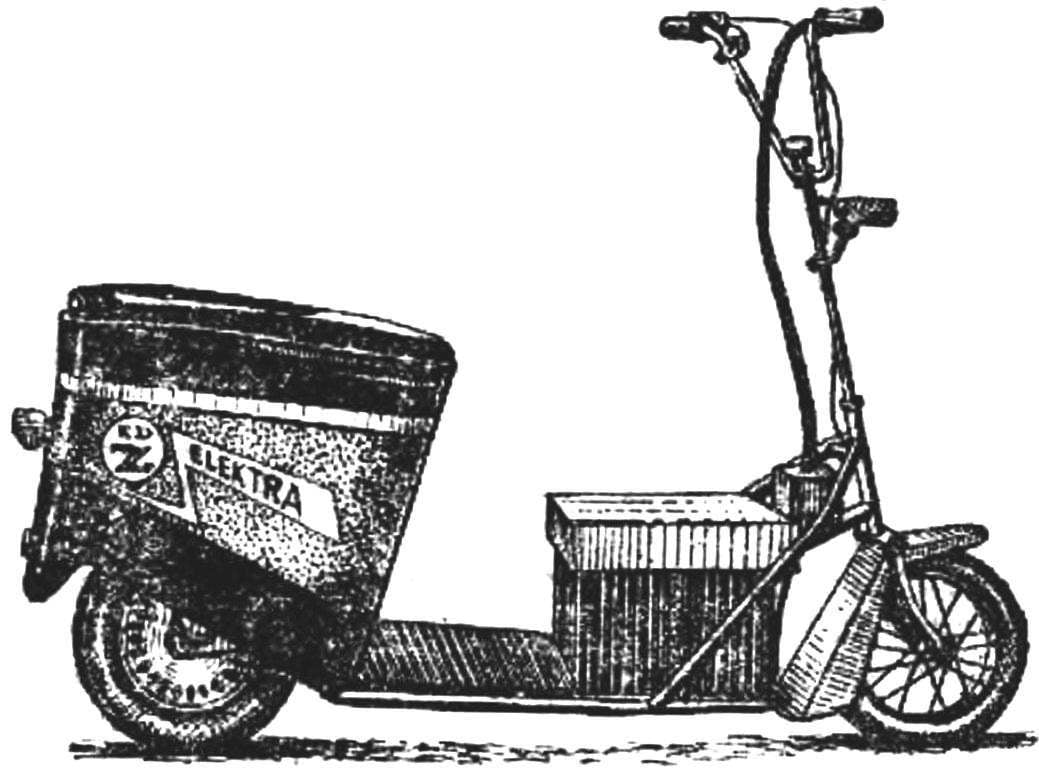 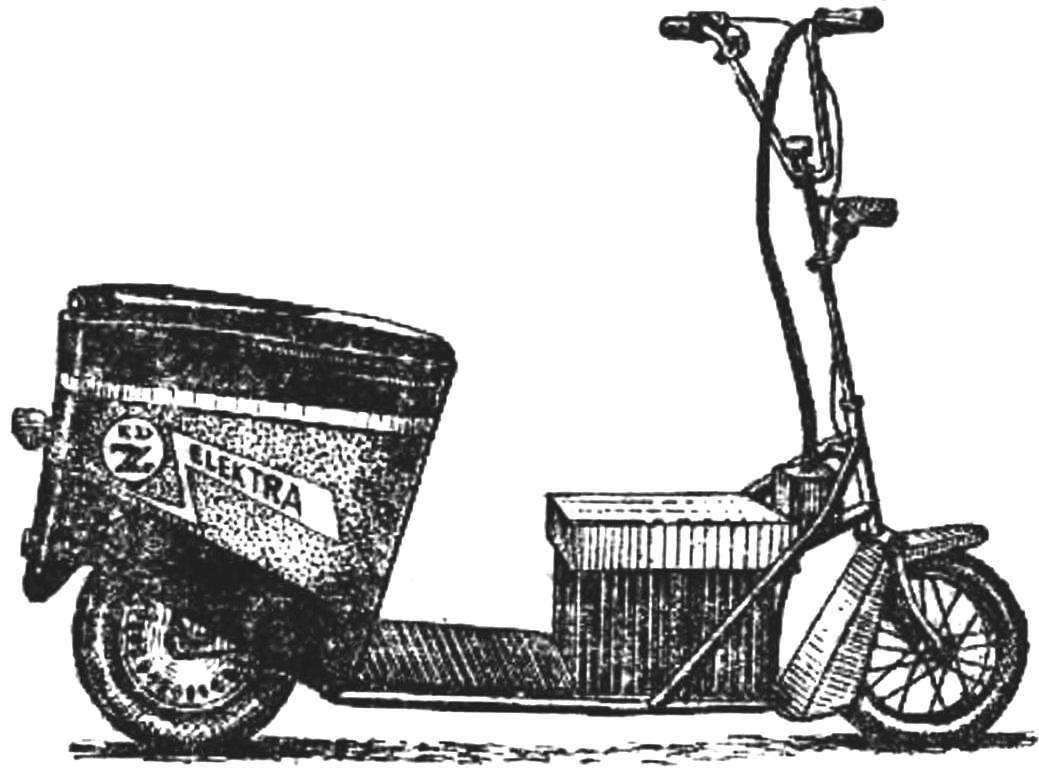 Autonomous electric vehicle for urban master-lay is born in pain. The searches are in many countries and firms, and individual enthusiasts, yet Balk at the same impasse: power, drive. Design created by analogy with the used in production areas, being “dragged” on the streets, reminiscent of a fish out of water — they also “choke” from lack of electricity, the power required speed. Because the developers have to deal with existing types of batteries, the energy intensity which does not allow to use electric motors, similar in power to the internal combustion engines. Hence, not the same acceleration and ground speed, and the range obtained is very far from desirable.

Enthusiasts of the electric vehicle can not escape from a kind of “witch’s circle”. The desire to enter the dynamic characteristics of the machine in the framework of the rhythm of modern city street makes use of the powerful electric motor. This, in turn, leads to an increase in the mass of the power source, which will inevitably impact on the need to cement (and, hence, even more weight!) the very design. Therefore, a more powerful motor…
The circle is closed. And is there a way out?
Best hope for further progress in trackless electric transport rely primarily on food sources.
In the laboratories of many countries are developing new types of batteries having higher energy density, i.e. the amount of energy per unit weight of the current source (for details, see “M-K” No. 4, 1968 and No. 4 of 1969). The second component optimistic hopes of the thyristor control system to achieve greater throttle response and economical flow of electricity.
But in the long term. And while developers and especially Amateur designers have to put up with equating the calculated speed and acceleration characteristics of the lower range of requirements for motor vehicle; to focus on a small range without recharging, and limited capacity.
The most serious of those problems facing the developers of those individual types of electric vehicle, which tends to be the level of comfort reached by car. Such vehicles with auxiliary power sources requires a particularly economical use of electricity: because of this, ceteris paribus depends on the reserve. However, even in well-designed the electric part of the energy is expended in moving the heavy mass of the body, frame, suspension, wheels, seats, etc. So, the most economical electric crew would be, whose own weight would be as low as possible.
TECHNICAL CHARACTERISTICS ELECTRIC MOTOR CREWS * The first number is for the AC mode, the second permanent.
** Included in table for comparison of characteristics.
On further consideration, we can conclude that if you give up the comfort that using electricity one or two conventional batteries from cars, you can move practically with the same speed and the same distance that the electric vehicle classic layout. What kind of car without comfort? Yes, still the same old motorcycle, electric operation only — electricl. They began to produce some foreign firms. Brief characteristics of these machines are given in the table. There’s also shows for comparison the data of one of the best English electric “the Enfield 465”, which was shown at the world Symposium on electric vehicle a few years ago.
Comparison of the characteristics of the electric vehicle, for example, electronicam type “Cager” demonstrates the high price for the comfort. To carry two people, the vehicle should simultaneously move to 658 kg of your weight, spending her four times more energy than their riders. Meanwhile, the “Cager” with the same reserve and develop nearly the same speed weighs almost the same as they carried people, that is the “motor” characteristics.
Despite the modest technical capabilities and relatively high prices, electronicly now in demand. And this is understandable. For example, a walk in the woods on smokeless and noiseless electric crew, no doubt, nicer than the petrol, especially if we add to this and more simple operation and maintenance.
But electrotick — not just the motorcycle’s frame plus electric. This new form of transport with the features of the design. For example, in the model of “Solo electric” was applied to the automatic centrifugal clutch providing slippage in the transmission in case of overload of the motor. In addition, upon the occurrence of an overload the motor can help with pedals, as on a moped. The machine has a device that signals the critical point of the energy consumption in the batteries and the need to move to the place of the EQ-Cycling.
Some electrocyclic designers put built-in charger. The mass of the crew increases by only 3-4 kg, but there is a possibility to charge batteries in any place where there is mains. For example, in “Cohere” charger made in the form of a “tank” and are mounted on the top tube of the frame.
Used electrocyclic DC motors with serial excitation have a capacity in the range of 500 ÷ 730 W and are designed for 24 V and 48 V.
Installation on the drive is not bypassed and a normal bike. The battery from the car, placed in the bag with a tight lid, usually fixed to the Bicycle frame or on the trunk, above the rear wheel of the machine. Motor with friction rubber roller on a short shaft hinge is connected to the front fork. In the working position under the action of the spring roller is pressed against the front wheel of the Bicycle transmits the rotation from the electric motor. To the off position the motor is translated by a lever on the steering wheel, like the brake handle. When you press the lever force is transmitted through a flexible cable hinge to mount the motor: the last is lifted, and the roller ceases to touch the wheel. At the same time switches off the electrical circuit of the engine. The lever can be locked in pressed state, and then electroid is the bike you can move around using the pedals.
The table shows data for a Bicycle with a motor power of about 400 watts. A small mass of electromed and the opportunity to help the engine on climbs pedals allow you to use motors with a capacity of only 150 — 200 watts. The pedals are also contributing to the increase in the reserve, with a single charge. However, inevitable losses in maximum speed.
CHARACTERISTICS OF MOTORS WITH SERIAL EXCITATION 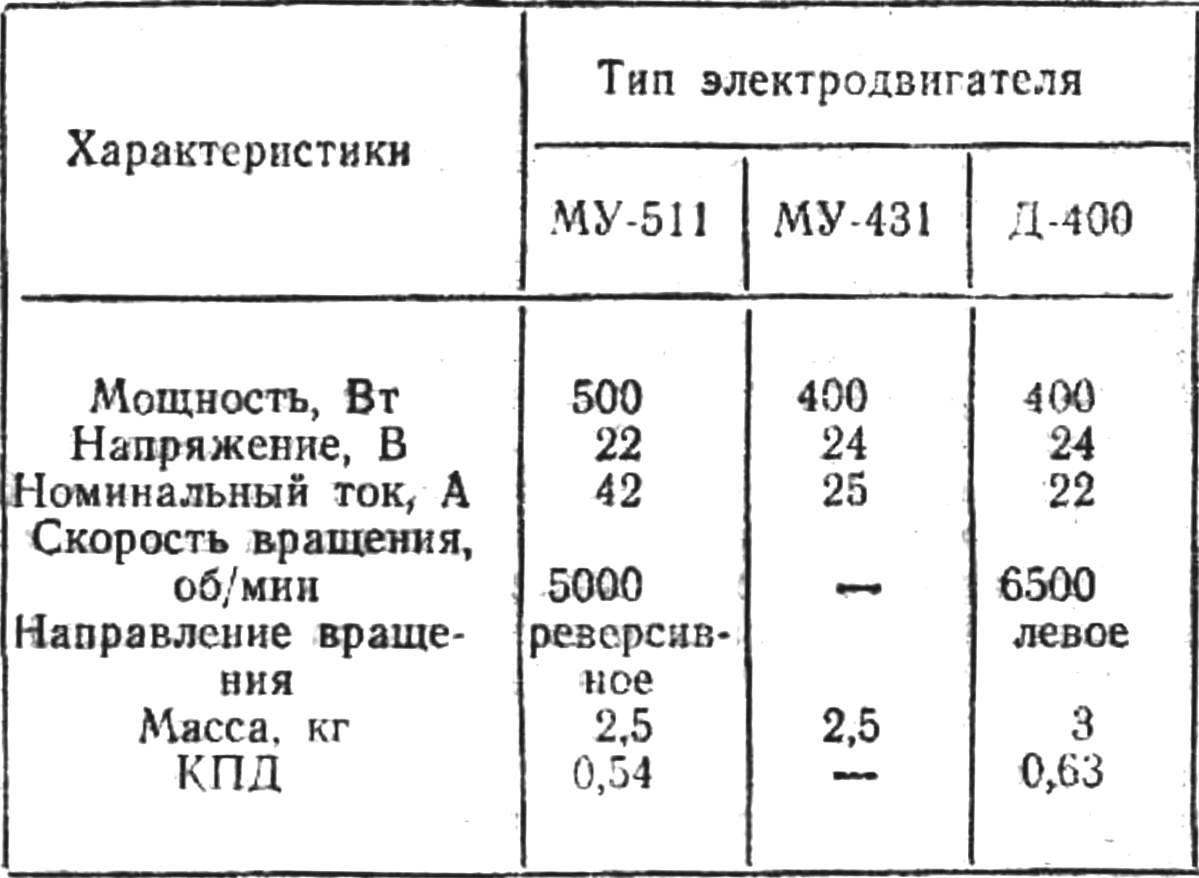 Perhaps the option of elektrifizierung bike available at the most an Amateur design. Here all works are reduced to the production of detailed electric drive. However, despite the alluring simplicity and attractiveness of electropedic they have one serious drawback. The battery on them is pretty high, and if you do not take special measures of protection, in the fall perhaps the destruction of the current source due to hit the road. Thus the acid can get on clothing and on the body of the fallen. Depreciation and sealing of the battery will lead to the weighting of the design: need a hard container. Apparently, the most efficient solution to ensure the safety of the battery without the special container will be the location as possible. It is also necessary to take care that the electrolyte does not leak from the vent holes.
On this way went the Czechoslovak Amateur designers, creating original electric scooter Electra. This machine has a low centre of gravity and a very small mass chassis. Used in the electric skateboard wheels, fork in the steering column from scooter. “ELEKTRA” with an adult driver can overcome rises to 8%, and “samokatnaya” layout gives you the opportunity to help the motor on hills and when starting a lead foot, as is done for non-motorised scooter. Low platform for your feet is very comfortable for the driver when boarding, starting, and stopping.
Scooter frame is welded from thin steel tubes. The motor, power train, charger and switch “drive and charge”, located under the seat and are covered with removable cover. There is also a place for tools and small items. The force from the electric motor through a belt drive is transmitted to one end of the intermediate shaft. The other end with a sprocket is connected to Bicycle roller chain with a rear wheel of the scooter.
The motor and battery are protected against overload and short circuit protection automatic fuse, which is used as a Parking switch the battery. The fuse is installed at the front wall of the battery on the vertical rack frame. The inclusion of the electric motor is made by turning the knob on the steering wheel like the handle throttle on a motorcycle. Rotation of the handle is transmitted to a flexible shaft for operating switch mounted near the battery. As a flexible shaft used drive shaft from a speedometer of the vehicle. The applied electric skateboard retarded one “jaw” type of racing bike, acting on the rim of the front wheel. However, the design of the electric skateboard allows you to fully use the brakes on both wheels.

An electric skateboard and the scheme of its movement on the ground:
smooth area — descent — ascent — smooth area.
Of course, an electric skateboard is not intended for movement in the flow of large transport. However, in our view, “ELEKTRA” can be a convenient vehicle for the automobile city, for a stroll outside the roads. The authors of Electronicat and anticipate its wider application: for example, as an internal transport for the personnel of the airports, large enterprises, located on large areas. Experience has shown that building a homemade two-wheeled electric crews similar to the one described above, it is necessary to use DC motors with serial excitation. Then the energy taken from the battery in all modes, including at a set rate will be the same. The magnitude of the load will depend on only the speed of rotation of the motor shaft.
This condition is crucial to ensure uniform loading of the battery, which, ceteris paribus contributes to greater driving range without recharging. It is also important that the operating voltage of the motor matches the source voltage of the power supply. However, when installing electricl one dvenadtsatikolonnom battery sometimes it is necessary to use motors with higher operating voltage: dvenadcatiletnih choice of powerful engines is limited. This, of course, be reduced, and shaft power and rpm, and engine efficiency.
For reference here are the characteristics of some motors suitable for electrocycle a range of capacities.
M. TODOROV, engineer, Leningrad