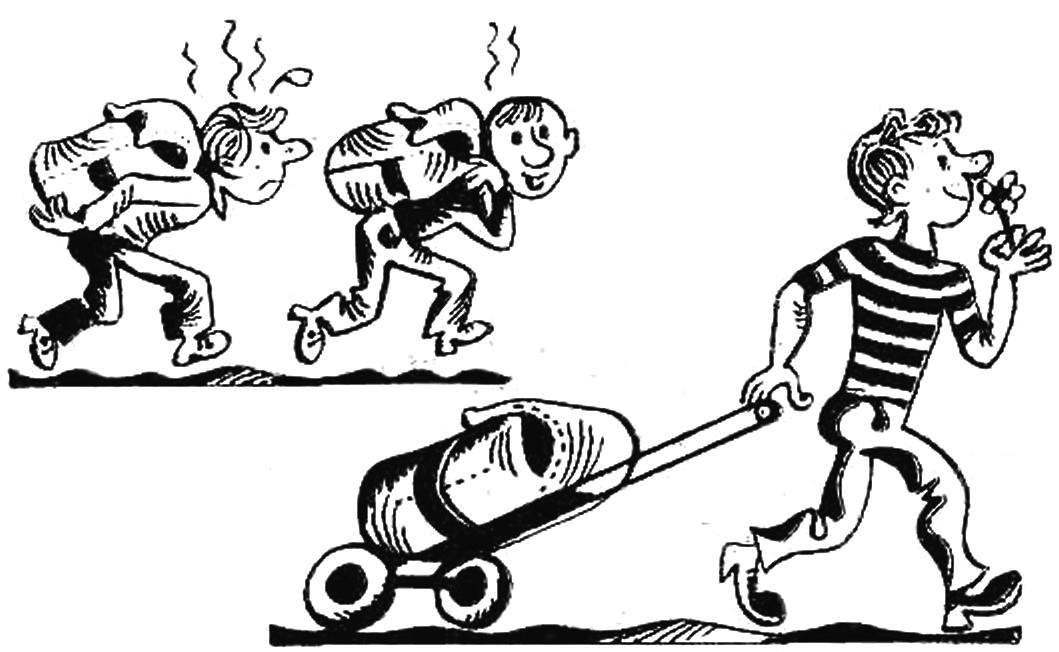 Summer is a time of exciting tours for lovers of water tourism. However, it is not easy to reach the shore with a heavy backpack and kayak.
In one of the summer issues of the journal in 1973 was published the description of trolley for kayak. Would like to offer my design compact lightweight collapsible cart of the same destination with a good “cross”. This cart five seasons has served us in the near and distant campaigns. It had to sometimes carry two kayaks or one kayak with two backpacks. It easily passed and the sand and the dirt and forest roads. With her help, we made the portage between lakes of Lithuania.
A collapsible cart comprises wheels, a platform, two tubes, a handle and fastening straps or ropes.
In the disassembled state, the platform folds away with handle and fastening straps in a bag and with the wheels placed at the bow or stern of the kayak. The remaining two tubes are used as the main pillar in the tent, “baby”. Fig. 1. The platform is fully assembled and folded (right) position.
Platform welded from scraps of thin-walled steel pipes. It consists of a frame made of tube Ø 20 mm, two bearing brackets of the tubes 24 and Ø 16 mm and two support and freely moving along the axis Ottosen (pipe Ø 16 and 24 mm).
In a frame pressed on the two connecting sleeves. In the corners of the brackets are welded bushings for the axles. Tips Ottosen slightly recurved, and with them the welding are fastened a pair of earrings. Wheel ready — from scooter with inflatable tires. For reliability it is better to replace spokes on the wheels.
Handle for truck — back from the crib. In curved ends, as in the frame, pressed on the docking sleeve. Fig. 2. Collapsible cart for kayaks:
1 — pen, 2 — tube, 3 — frame platform, 4 — swivel bracket, 5 wheel, 6 — bushing, 7 — axis, 8 — odusina, 9 — lamb 10 — spring constipation.
Pipes can take any, but to facilitate weight preferably duralumin (D16T).
Constipation for joining the connector parts the simplest, like the oars from the canoes “salute”.
Assembly of the cart simple: first going to a platform with wheels. Falls as the landing gear of the plane, the brackets. Then have them to stop out-of etkisini. In the sleeve of each bracket and earring adosini is inserted into the wheel axle and bushing and tighten the nut or lamb. Then fit the pipe, and they are joined by a handle. The whole Assembly takes about 5 — 10 min.
Truck ready: load her kayak, put it on and touch the road.
Yury SAMOSHIN