The idea is to make the car the most I had in those days, when “the Zhiguli””Muscovites” and even “the Cossacks” could be bought only after standing for many years in the queue. Then came other times, and the car ceased to be a deficit. There are so many makes and models, what to choose-that became difficult.
The necessity of building a car seems to have disappeared, but the desire remained (like many people living in comfortable big city apartments, there is a desire to build with their own hands a small house). As they say, and “profession oblige” — once the diploma was defended on the design of the car, and work in the auto service center.
Only now before me too there was a choice — what car to do?
Many companies now make cars, prototypes of which are the most successful and popular cars of the past. Thus, the German firm Volkswagen has revived its legendary “beetle”, the British company “Austin” — the post-war popular “mini”, etc.
I also decided to design a machine that in appearance resembled the cars of bygone years, and the stuffing was quite modern so — called replikar.

A long narrow engine compartment, big bulging fenders, sloping trunk of all cars 30-ies of the last century. The back compartment of a homemade car Moskvich M Borisova also fits into the concept designs of the cars of that time
The choice fell on the car 30-ies of the last century. In my opinion, the cars of that time were the most beautiful. Probably, the designers did not yet so aspired to rationality, and the minimum possible CX probably was not their main criterion.
The car I called BMW, but not by the abbreviation of the famous German company, and their initials. Because the exterior of my car collecting and is based on the appearance of many cars of different companies and brands, having, of course, his “face”.
The construction of the car took the lion’s share of free time for four years, and a significant share of the family budget. A no experience of homebrew I by this time had. But in the course of construction of the machine had seriously (both theoretically and practically) to master almost all of autospecialty: mechanic, electrician, tinsmith, painter.
Before proceeding to the description of the design of the machine, I want to note that registering homemade vehicles in the bodies of road safety (the former GAI) is fraught with certain difficulties. Because in its manufacture it is necessary to perform many specific and necessary requirements to the key relevant regulations. I’m with these rules previously reviewed and tried during the construction of the machine to use the units and components of serial cars: engine, transmission, but especially the undercarriage, brake and steering.
Before the construction I sketched a few options for the look of the car and figured the overall layout based on the size of used gear. It has determined the type of car body—double two-door coupe. This type fits into the concept cars in 30 years.
Chassis (suspension and frame, but rather the floor of the truck with the power elements) took from the crash (overturned) car GAZ-24 “Volga” — it was the most suitable base and wheel track. From the same old car in the course of construction used and some of the cab and bumpers, and the engine and all its life support units too. All units reviewed. worn parts replaced with new or overhauled. 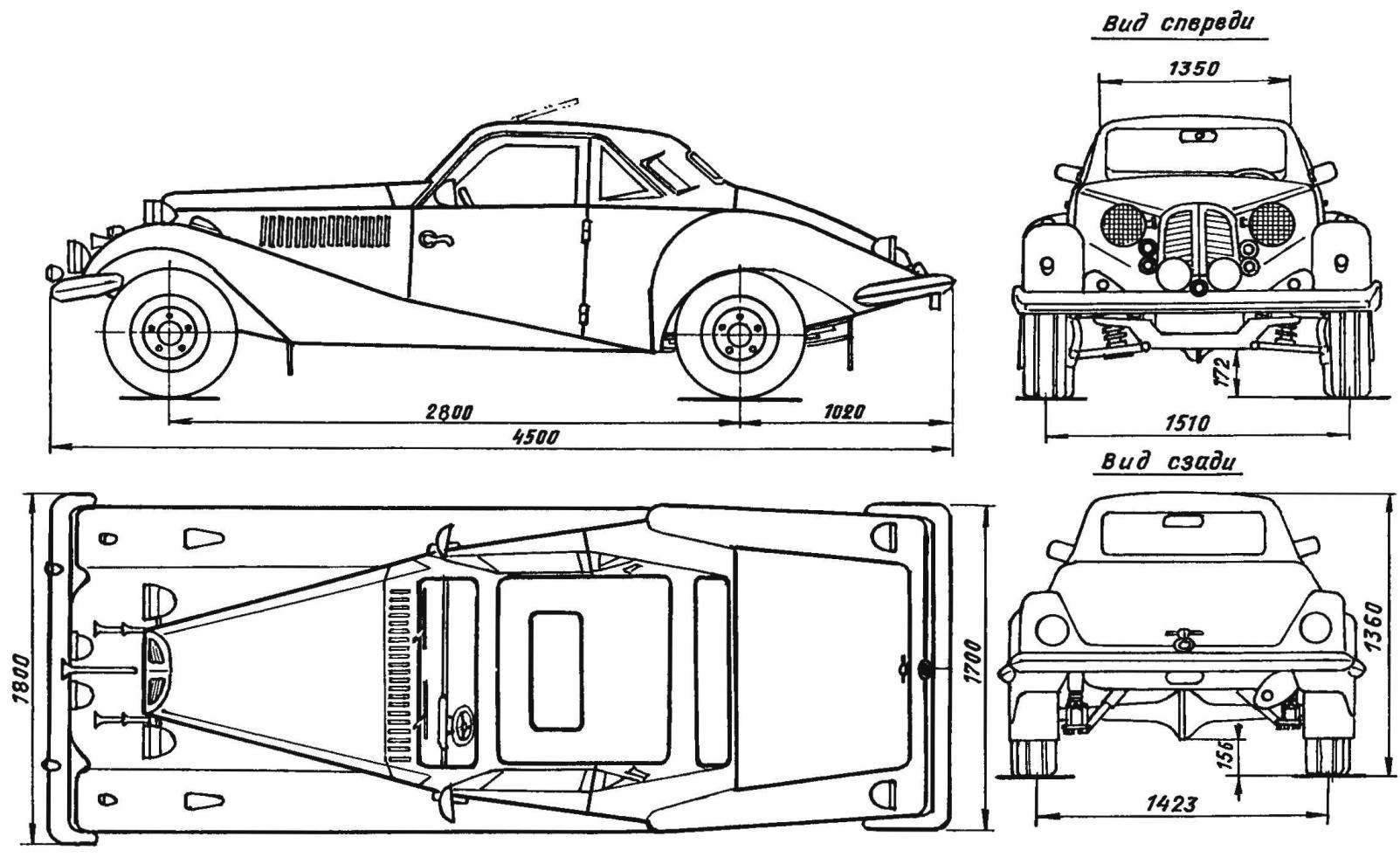 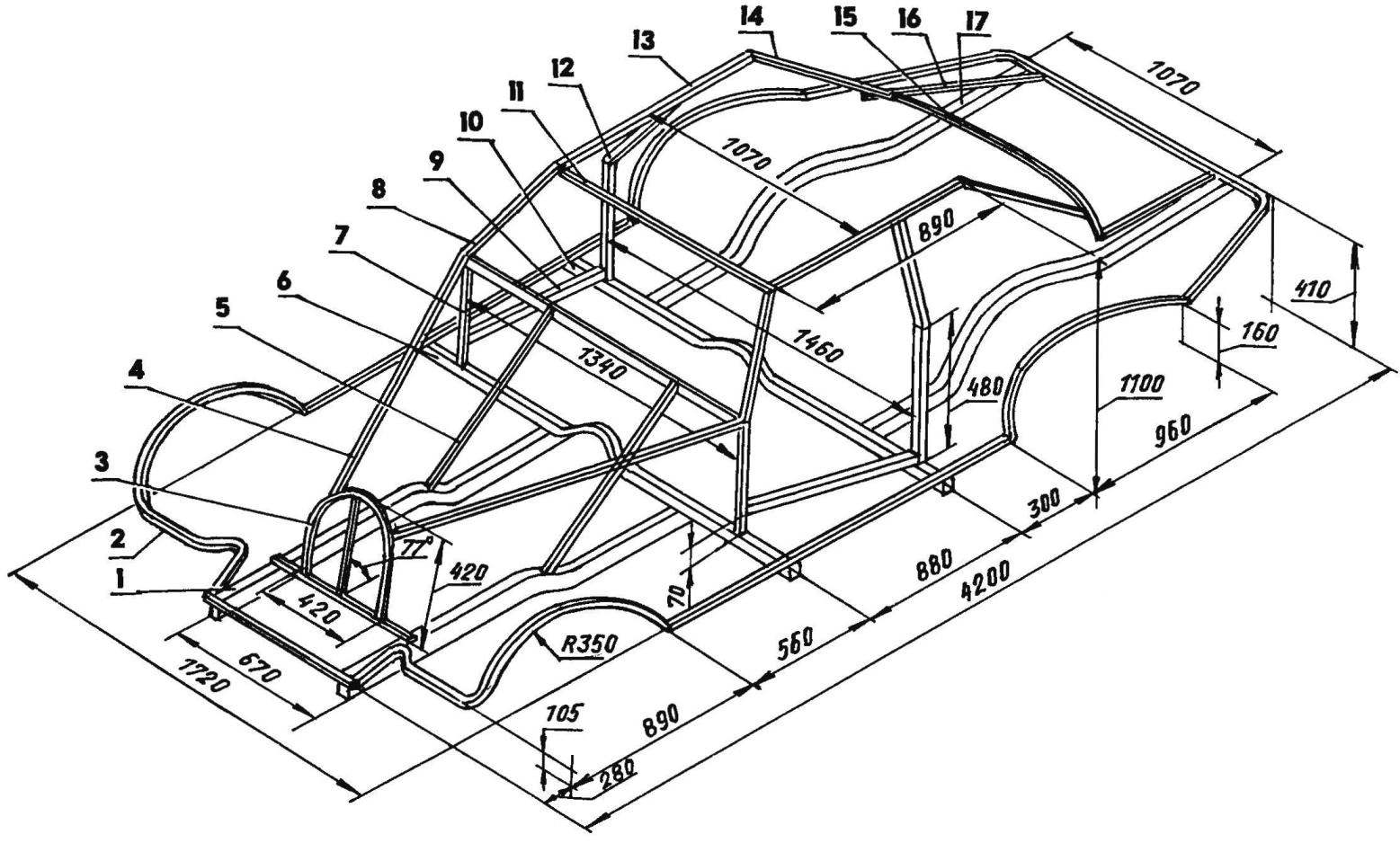 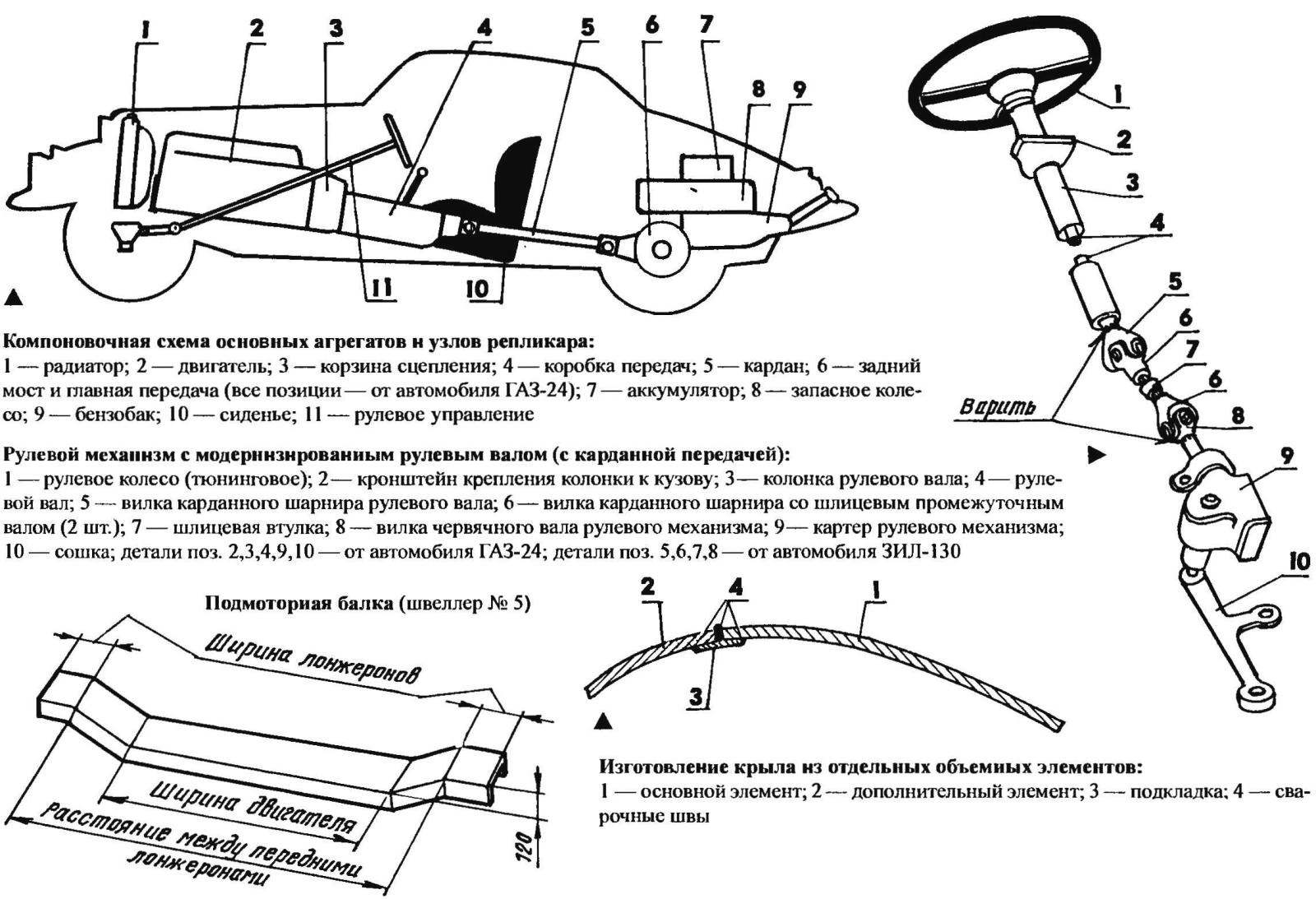 But the body frame and veneer — fully improvised. Frame made of steel pipes of square and rectangular sections of different sizes. To increase the rigidity of the wings around their perimeter in addition to body trim made of square steel tube 15×15 mm. the Outer edges of the wings buckled and welded to the tubes.
The dimensions of the body frame in the figure stamped on finished product during the preparation of the description of the vehicle to publish, so they are not as accurate, is to use them with the repetition of designs is possible only as indicative.
The engine compartment of cars of those times, as scholars know, was wedge-shaped. But unlike modern cars, where the wedge converges in the horizontal plane, the antique automobile club of America he converged in the vertical plane. So I did it on my car, sliding the grille by about 400 mm back compared with the GAZ-24. In order to fit it all volgovskoe units, mechanisms and instruments had to rearrange and concentrate, having compacted placement, in some hoodless cars.
Additionally, in the engine compartment mounted compressor for signals, of which the GAZ-24 was not. In order not to overload the engine compartment, the battery had to be placed in the trunk. The engine is mounted using rubber mounts on a homemade sub I-beam steel, channel No. 5. I-beam pre-welded to the side members.
Assemblies and mechanisms was altered a bit. First: was shortened by a driveshaft from the gearbox to the final drive. However, he was so short that did not even require balancing. Second, the steering shaft, on the contrary, is extended intermediate the prop shaft (like the ZIL-130). Now the steering column was even collapsible.
The most time-consuming to manufacture cladding of the body and especially the wings. Complex and rounded, their surface had to complete any of the individual volume elements of other cars, since no bending of machines and gadgets I had. For example, the rear wing is made mainly of redrawn and re-welded the front fender of the ZIL-130. To cut the main element attaches additional. Bottom I put a steel plate and welded it to both elements. Then brewed joint and carefully smoothed the seam. And so — to complete the manufacture of the part. Then, the joints plastered and carefully polished. Not always necessary to form the surface it turned out the first time. I had to redo it.
For parts with simple surfaces was able to pick up the finished items. For example, the sidewall of the engine compartment made from parts of the same assignment from the old mobile compressor unit, and from its roof made hood. 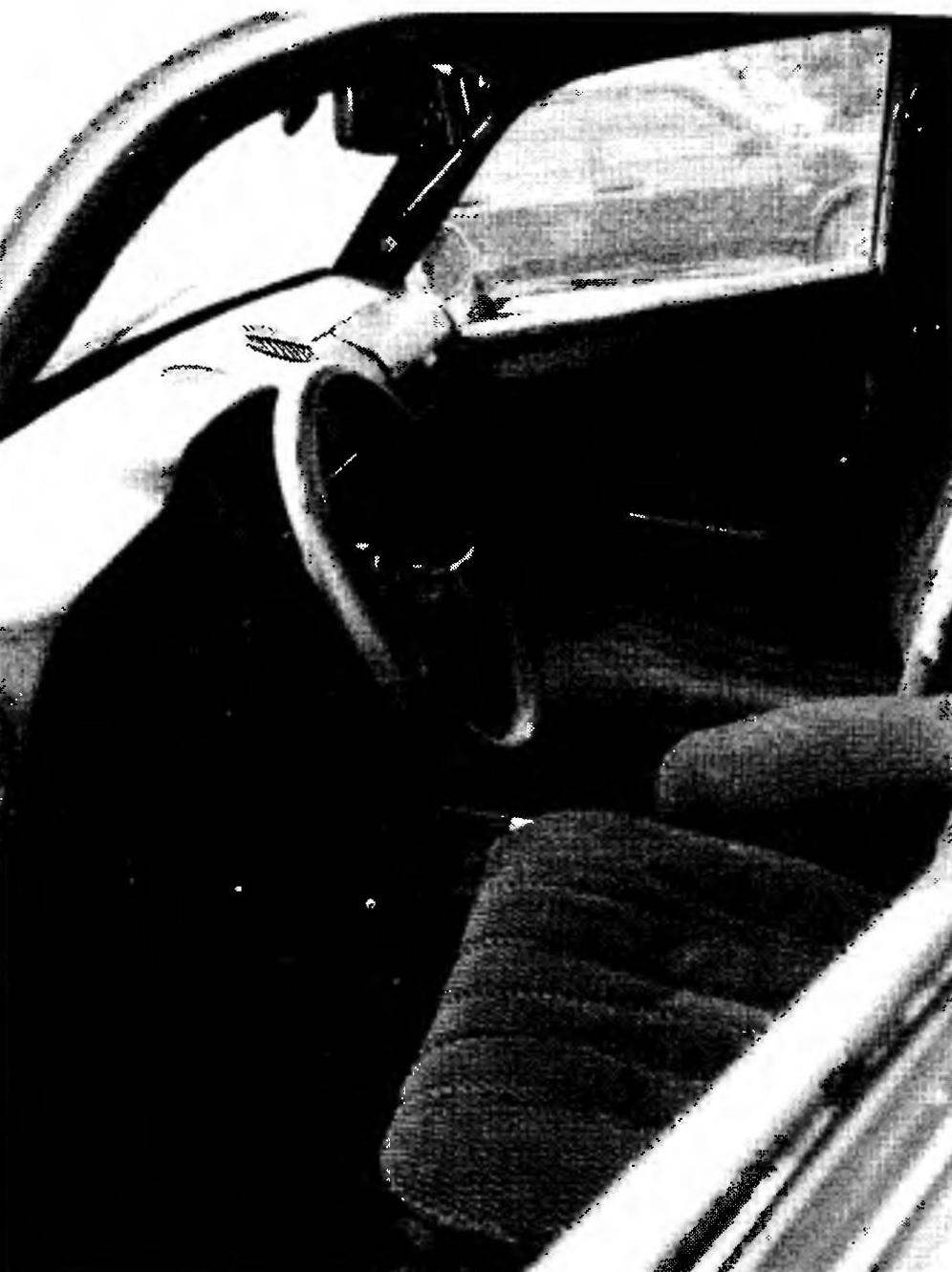 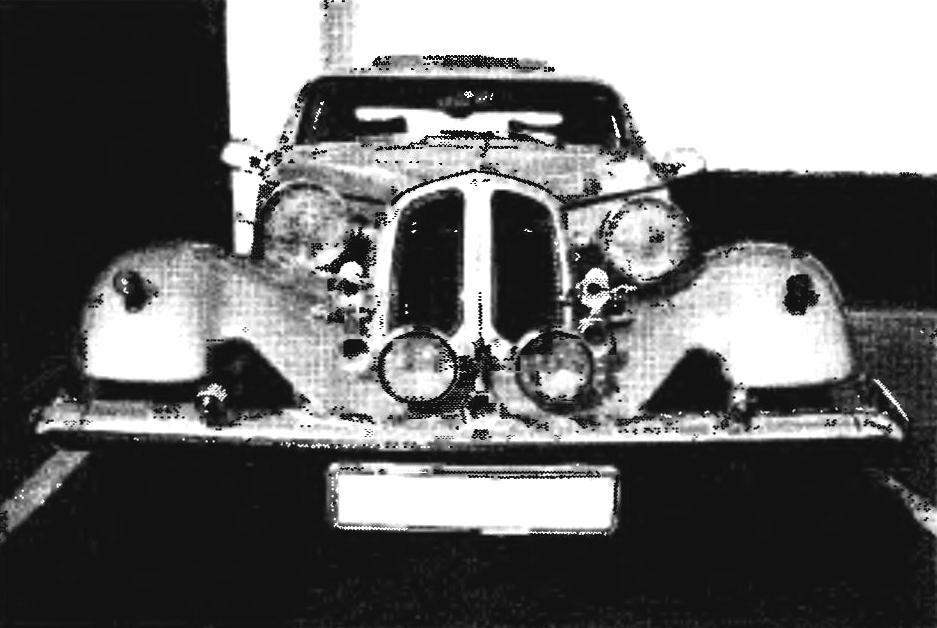 The grille on the “Volga” GAZ-3110. Cut in half n upper joined edges of the halves, it was replaced by the double signature BMW 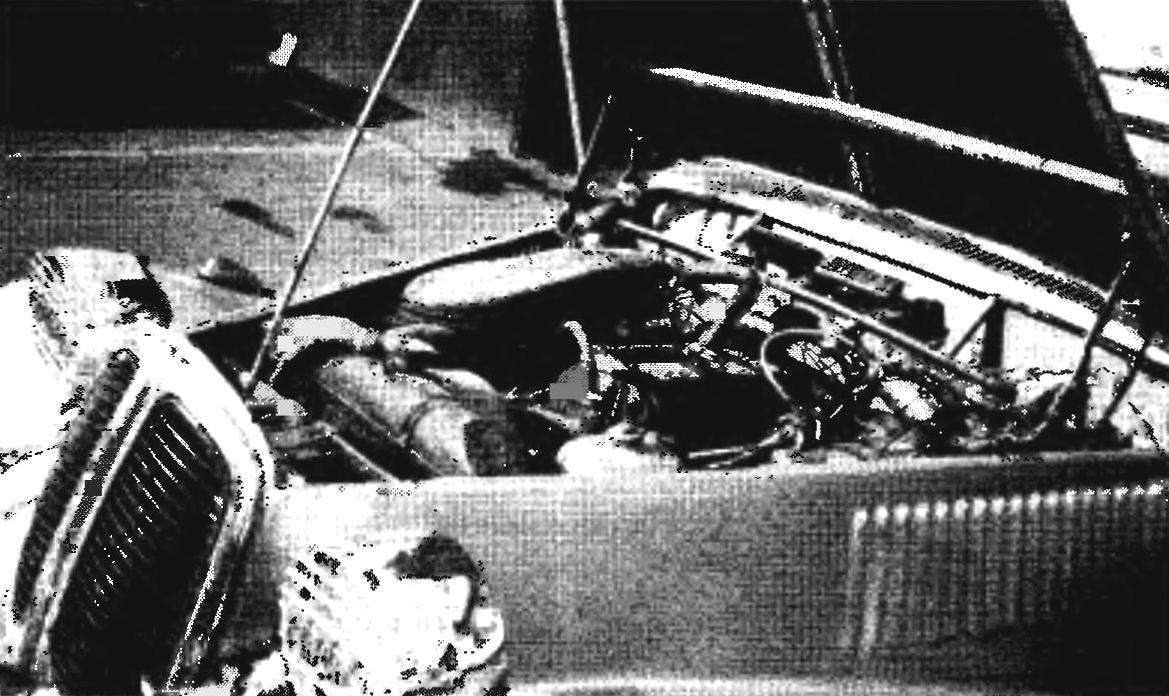 In the engine compartment, replicare units from the serial car GAZ-24
All work on the Assembly of the frame and fascia of the body was made in a garage with gas welding.
Car door — homemade, but their basis (part of frame) — from the back door GAZ-24. From the same machine and internal mechanisms for the doors and paneling. Door handles brass, unusual for cars curved shape (bought at the hardware store), but they fit well in the design of the machine. Therefore, even picked up the paint under the color.
Painted the trim of the car itself but at the service center, the domestic paint color “gold Niva”, gently, with a spray gun-spray gun; dried in the chamber.
The picking machine is suitable and relevant for the design of external devices (lights, mirrors, signals), oddly enough, not much difficulty is presented: they are in wide range there is a large car markets, and can be found at a very similar price. There was not only a suitable facing of a radiator the respective brand (for the time). But here the solution was found is quite simple: the grille on the “Volga” GAZ-3110, cut in half and joined to the upper edges of the halves, it was replaced by the double signature of BMW.
When recruiting machine outer devices tried to use a little more chrome parts — they give the car more presentable. Because in those years the car was still indeed a luxury. Plastic design of vintage cars is not suitable.
Lights bought halogen, but the light sources they have replaced incandescent bulbs. The signals of the air. Purchased it complete with electric (12V) compressor.
The gas tank of 67 liters is located under the boot floor. Such volume will allow to survive even short-term energy crisis.
The salon is equipped with the dashboard of the VAZ-2106 — she has a necessary and sufficient number of devices to monitor plant operations and systems of the machine. Wiring is hand made. Seat — also from the “sixth” model. They are certainly not very comfortable, but the smack of antiquity. Ceiling insulated 10-mm sheet of foam and covered with leatherette — it’s better suited to vintage automobiles, than the standard film. Any wheel picked out tunes — like, that he was comfortable although he does not really fit into the overall design.
Some outstanding features my replikar, of course, is not. Although the traffic on the city roads it is from modern cars is not particularly lagging behind to compete with them in the dynamic performance of my car, of course, can not afford. But to overtake me in a hurry not even “cool” cars and on the tracks. Usually long walk beside or behind them as an escort. Probably, their owners are also pleasing to the eye and disturbs the soul of my homemade.
M. BORISOV