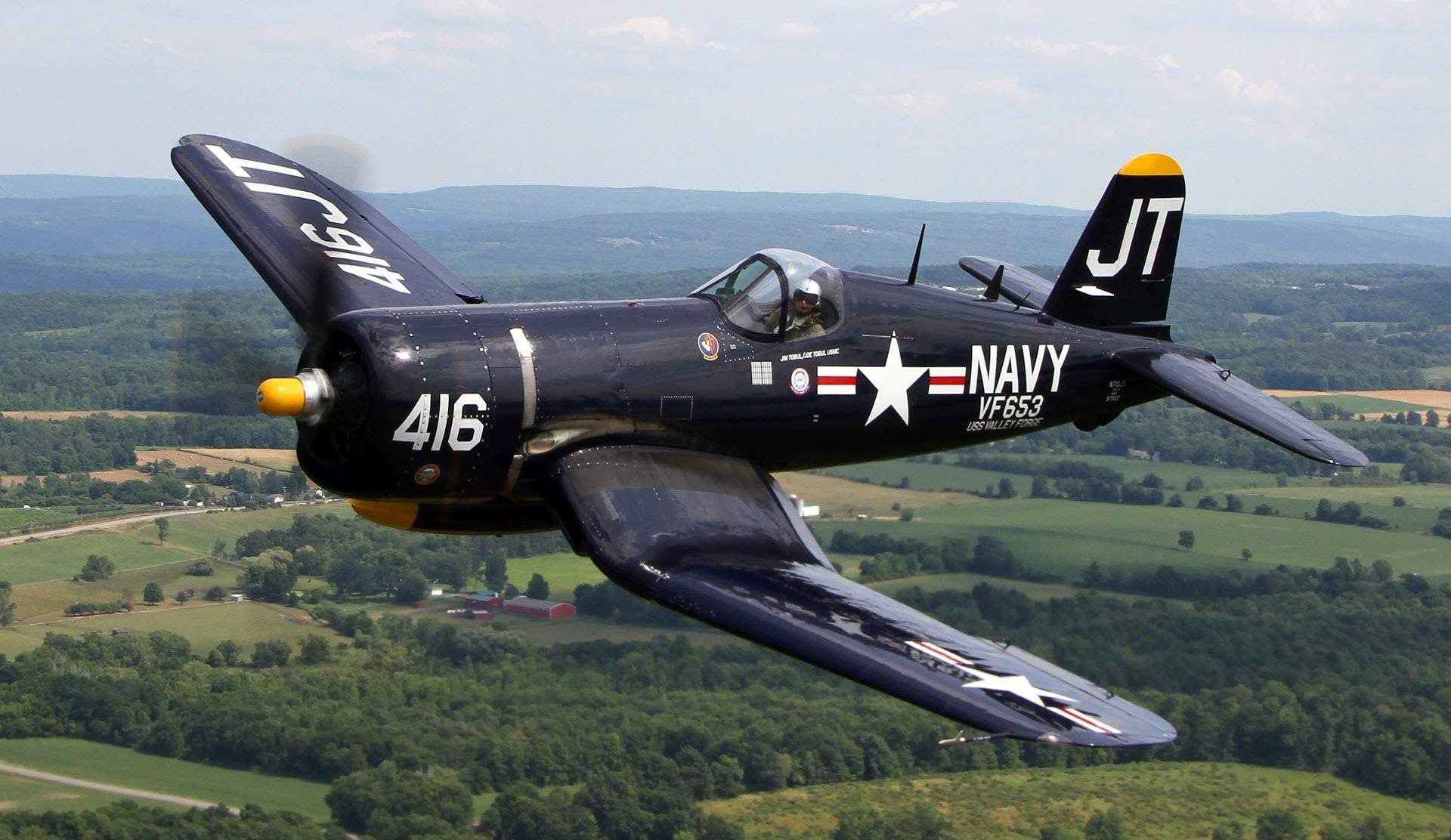 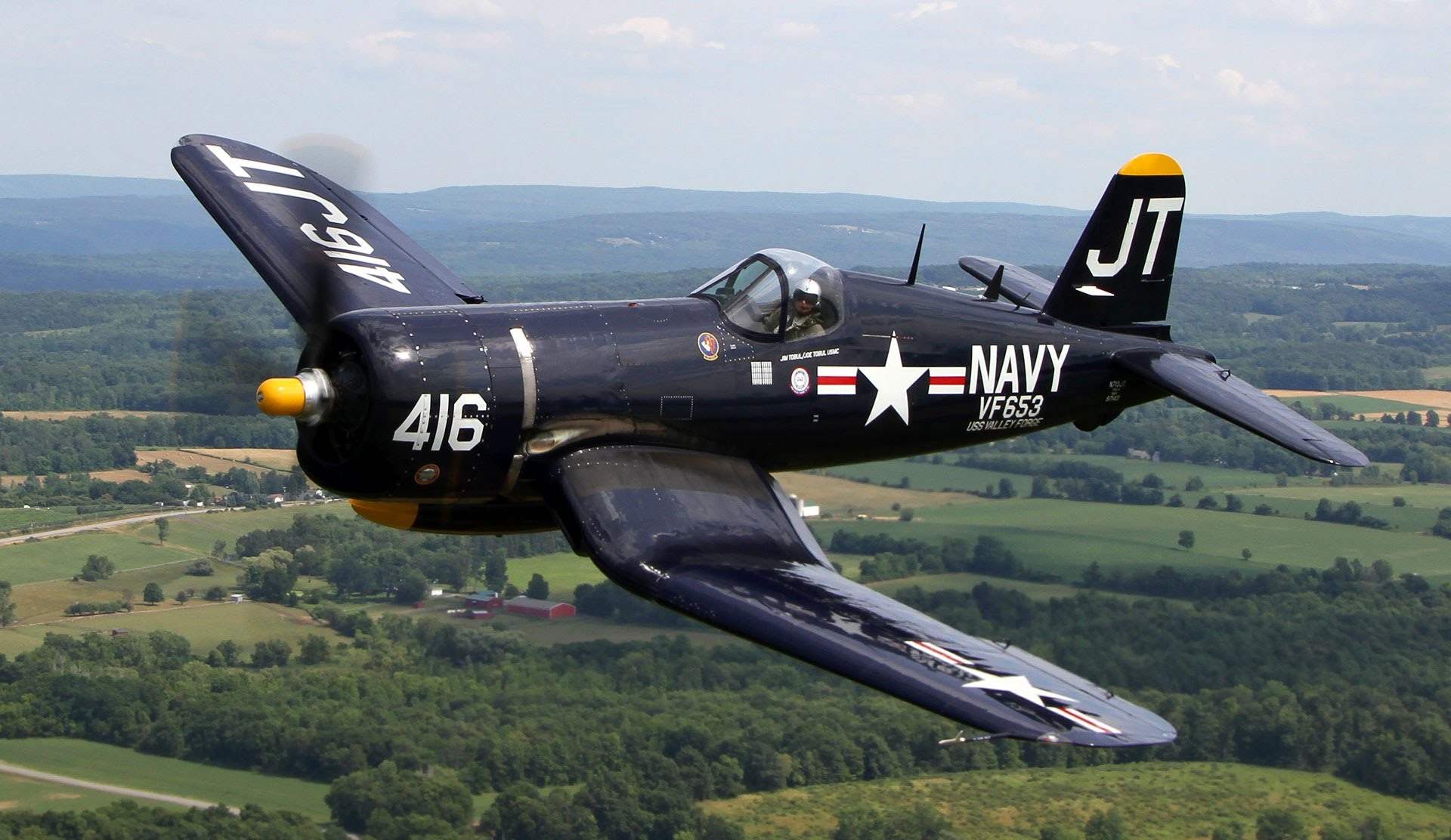 Carrier-based fighter F4U-5/7 CORSAIR. In the annals of aviation are not many aircraft left in her mark. But it is to such aircraft include the American fighter F4U CORSAIR the Chance Vought company, which had a great influence on the outcome of the air battles over the Pacific.

During the Second world war aircraft F4U was armed with 19 fighter squadrons of marine corps aircraft and six squadrons of carrier-based aircraft. In the Pacific, from 13 February 1943 until the end of the war F4U CORSAIR performed 64 051 sortie.
According to American data, F4U shot down in aerial combat was 2,140 Japanese aircraft, while it lost a total of 189 cars. The loss ratio in aerial combat for these fighters was 11.3:1 in favor of the Americans.
It should be noted that counting their losses from the Americans was quite peculiar. They did not include planes unaccounted for, has not held up to their airfields, written off as a result of combat damage and crashed on landing. In total, the sea dogs gained 1435 such “non-combat” losses. And if you calculate the ratio of downed Japanese aircraft and “Le Corsaire” with the “non-combat” losses, it will be 1.48:1. But despite this F4U CORSAIR is deservedly considered one of the best carrier-based fighter of the Second world war.
Released in 1942, it remained in service until the end of 1957 and thus became the last piston fighter in the American fleet. In other countries, “Le Corsaire” fly for even longer. For example, France has written off the last F4U only in 1964. Until the beginning of 1960-ies these planes was in the air force of El Salvador, Honduras and Argentina.
The history of creation
F4U CORSAIR was created under the leadership of chief designer of the company Chance Vought Rex Beisel. In the draft went to the two fighters, previously developed by Chance Vought —V-166A and V-166B.
June 11, 1938, the Navy gave Chance Vought firm commissioned to build the first prototype of the fighter under the designation XF4U-1.11 February 1939, representatives of the Navy was shown the full-scale layout of the aircraft, and may 29, 1940, test pilot Lyman A. Bullard raised built the car in the air. During testing of the XF4U-1 reached a speed of 651,7 km/h (in a dive was overclocked to 885 km/h), which was the highest rate among the US fighters of the time.
On 30 June 1941 the Navy ordered the carrier-based aircraft and aircraft marine corps aircraft 584. The first production CORSAIR (serial number 02153) with the motor company Wright R2800-8 power 1970’s HP took to the air on 25 June 1942. The fighter reached a max speed 638 km/h at an altitude of 7545 m and rate of climb of 15.23 m/s. an Official ceremony F4U-1 to the customer took place in six days. 7 September 1942 the first fighters entered service with squadrons VMF-124. All the planes of the first series had a takeoff weight of 5388 kg, and the mass of the design was 4028 lbs. At the request of the Navy in the course of serial production of the fuel tank capacity has been increased several times; take-off weight of F4U-1 reached 6286 kg.
The following modification of the aircraft was the F4U-1A was increased to 650 km/h speed and better maneuvering characteristics. To improve visibility during landing on a flight deck the cockpit of a fighter was raised to 220 mm, and the lantern received a new glazing.
On the F4U-1A, in contrast to the predecessor, can be suspended 454 kg of bombs or two additional fuel tank, containing 736 liters of fuel. This fuel allowed the F4U-1A to remain airborne for 4.5 hours. From November 1943, the CORSAIR began to install the new engine R2800-8W with power of 2250 HP with water injection system. 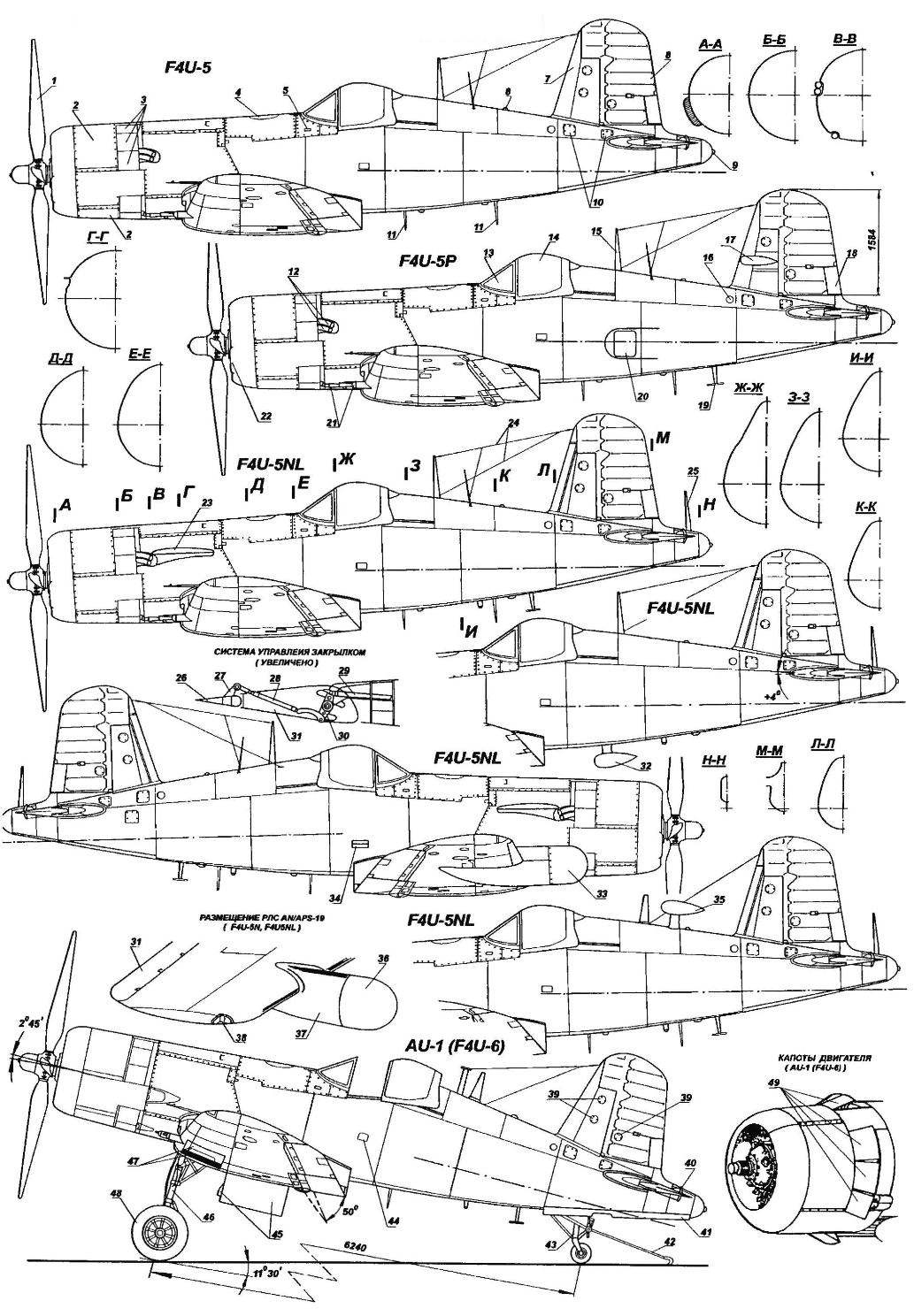 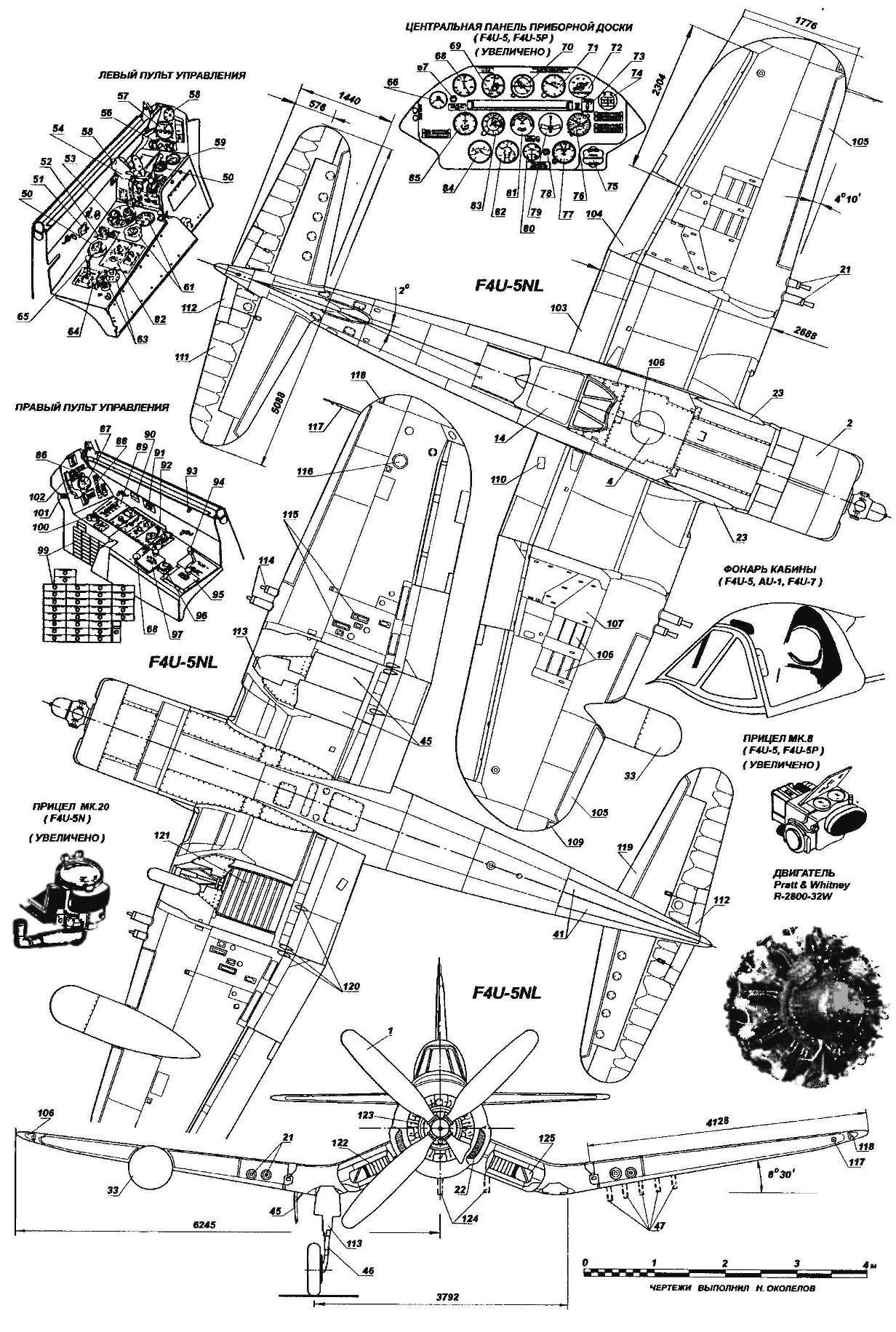 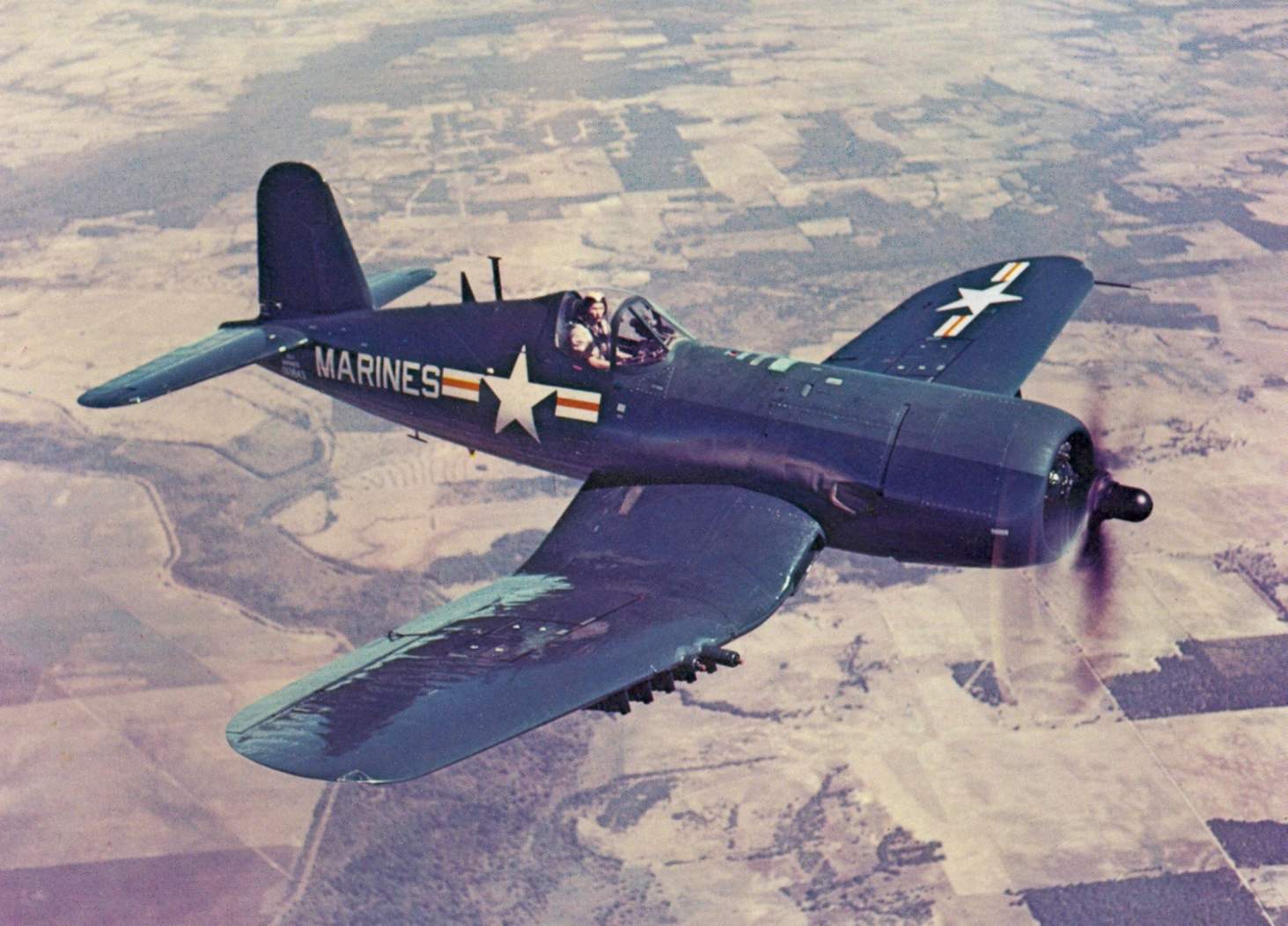 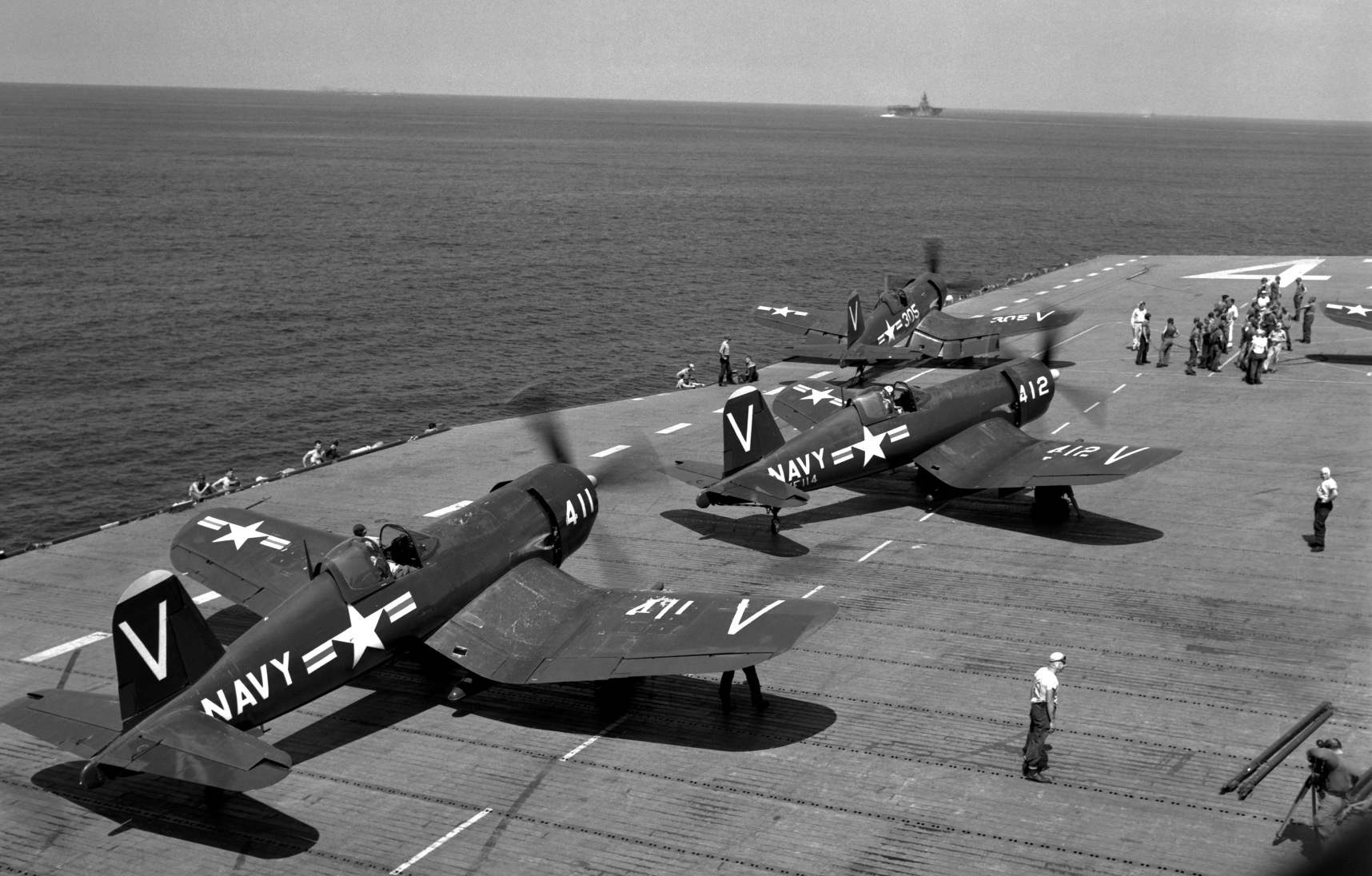 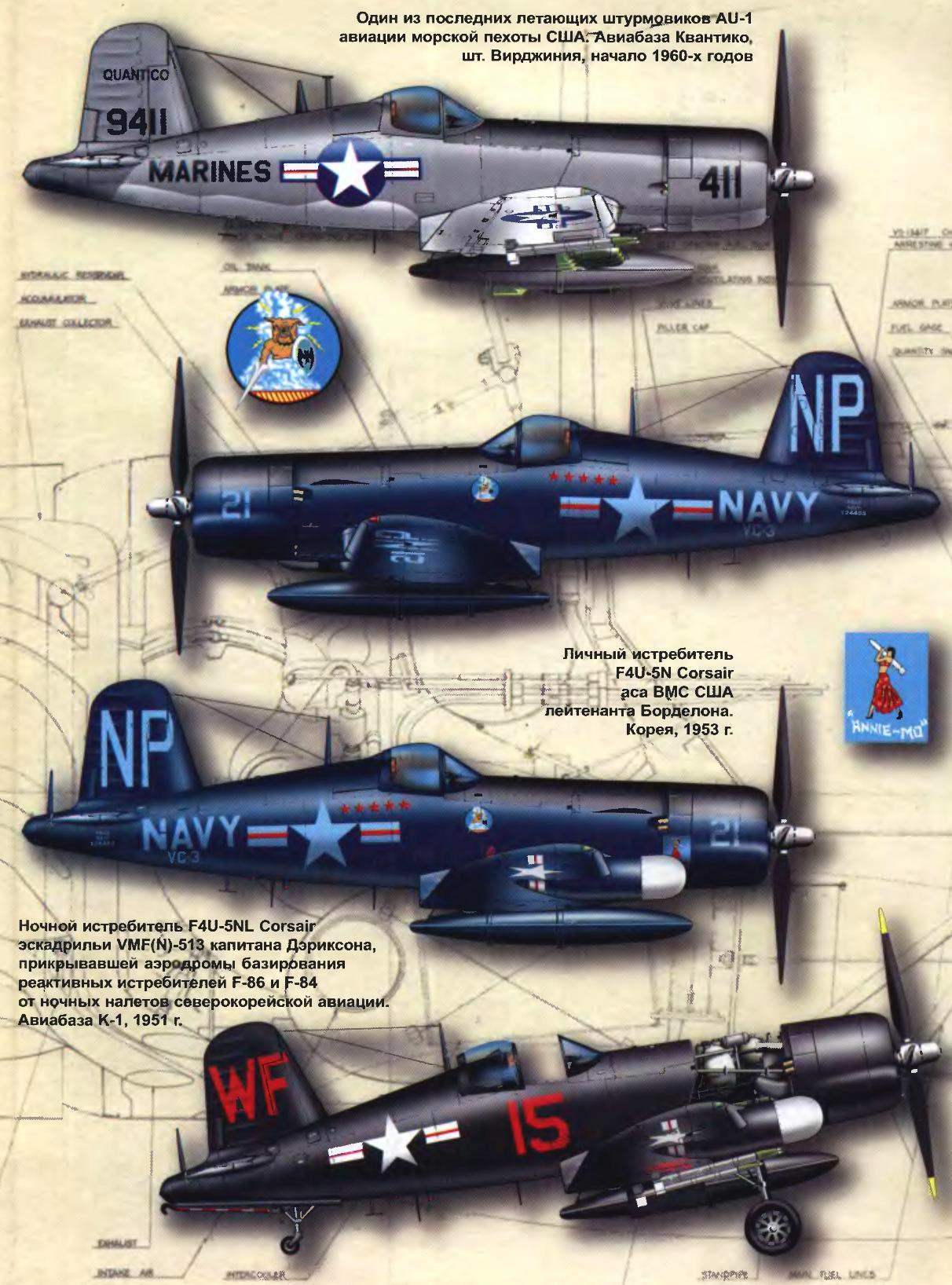 The composition of equipment on the fighter collection F4U-5 was part of autopilot P-1 radar altimeter AN/APN-1 and also radio AN/ARC-28 and identification system AN/APX-2. Indicator radar was mounted in the center of the dashboard. On the night fighter F4U-5N and F4U-5NL on the right console fairing mounted radar AN/APS-19A or APS-6. In the rear (tail) of the fuselage was located the tail wheel, landing brake hook and a niche cleaning tail wheel.
The two-spar wing, all metal construction, made on a “reverse gull”. This form of the wing allowed to use the shorter uprights of the main chassis, and when making a forced landing without landing gear Chayka reduced damage to the fuselage. Wing profile NACA 230018 at the root and NACA 23009 in the terminal part. The thickness of the wing 18 per cent at the root and 15 in the area of the fold and 9 — at the end. Maximum wing chord 2688 mm, minimum mm. 1776 Structurally the wing consisted of three parts: a center section and two folding up to the fuselage of the console. The main spar is joined to the front power frames. In the center section of the wing mounted oil coolers with a diameter of 300 mm and the guide device of the inlet of the supercharger. On the right wing of the plane includes a shot-method for fixation of the results of the shooting.
On the trailing edge across the span of the wing was located flaps — four sections to the center section and two folding wing consoles. The total area of the flaps-flaps 3,38 m2. The maximum deflection angle of all sections — 50°. The ailerons in a big way 2304 mm took the trailing edge of the wing tips and were suspended at three points on the horns. The deflection angles of the Aileron up 19° down 14°. The area of the ailerons to 1.68 m2. Trimmers were installed on both sections of the Aileron.
On the front edge of the left wing was installed LDPE. On the upper parts of the console were located hatches for access to the guns and cartridge boxes. On the lower surface of the wing were cut out of the window to pillsoverseas. On the center section of an airplane wing could be mounted two removable pylons (one to the right and left) that were used for the suspension of weapons or additional standards.
Vertical tail unit all-metal, normal scheme. The power set consisted of stamped profiled stringers and ribs. The dural covering. To compensate for the torque of screw the keel was installed with an angle of 2° to the left relative to the plane of symmetry of the aircraft. The area of the keel — 2.03 m2. The area of the rudder is 1.20 m2. The deflection direction 25° in both directions. On the modification of the F4U-5P on the tail mounted antenna of the radio compass, which was a characteristic feature of this modification. Stabilizers monocoque construction with a shell made of metalit. The installation angle of the stabilizer 1° 25′. Area of 2.66 m2 scope 5088 mm. the area of the elevators of 0.68 m2. Deviation elevators: 23° 30′ up and 17° down. Steering direction and height — hard, from the control stick and pedals. Trimmers were driven by a knob on the left side of the cab.
Landing gear is retractable, tricycle, tailwheel. In flight the main stand was located in special niches in the center section of the wing. When cleaning they turned back on the flight, the wheels were turned by 90°. Track — 3792 mm. Diameter pneumatic wheels — 813 mm, width— 203 mm Wheelbase — 7430 mm. the Tail wheel with Pneumatics with a diameter of 317 mm and a width of 114 mm were cleaned in a fuselage on the flight back and was kinematically connected with the brake hook. The system of harvesting and the landing gear is hydraulic.
Flight performance of aircraft CORSAIR post-war modifications

The power plant consisted of the engine, oil and fuel systems units to ensure their sustainable work. On all models F4U-5 was installed 18-cylinder radial engine is air-cooled Pratt & Whitney R-2800-32W, with a capacity of 2550 HP in afterburner. The engine was equipped with a two-stage two-speed supercharger, followed by cooling of the air and direct water injection. Hamilton standard propeller with a diameter of 4125 mm four-bladed metal variable pitch. The hood of the engine was carried out in a quick-detachable duralumin panels and provide convenient access to the power plant and its units.
The aircraft was equipped with a new automatic system of oil cooling and controlling the air supply to the blowers. Louvers on the hood regulate air flow depending on the mode of engine operation and oil temperature. AU-1 was equipped with an engine Pratt & Whitney R-2800-83W power HP 2550 (2800 HP afterburner) with single-stage supercharger.
Armament consisted of four 20-mm guns M3 or T-31 with a total complement of 924 shells that were installed in the wing outside area, rotor swept. On the night fighter F4U-5N and F4U-5NL guns were equipped with flame arresters. On a Central pylon under the fuselage can be suspended 908-kg bomb. Centroplane reinforced the wing pylons was designed for bombs weighing up to 1,000 pounds (454 kg). On wing pylons were installed ten unmanaged 127-mm HVAR rockets. Aircraft AU-1 had a reinforced wing pylons, on which are mounted bombs weighing up to 250 pounds (113.4 kg). In addition, on the inner, middle and outer pylons could also be suspended from a 500-lb (226,8-kg) bombs. On the ventral and two centroplane pylon, if necessary, is attached to the tanks with bombs or external fuel tanks.
A. CHECHIN, N. Food reserve was