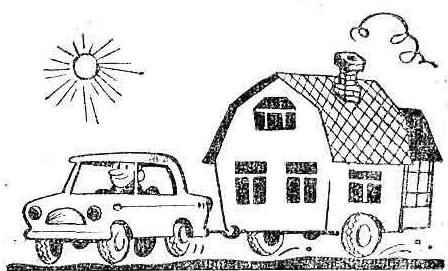 Offer readers a description of the design built my trailer. The creation of this garden on wheels gave me the tools and guidance previously published in the journal (for example, No. 8 1969). But much had to think out myself. The trailer was simple in design, compact to transport, convenient to the Parking lot in the chosen place of rest.
Over the last several years in the spring I bring the trailer to the recreation center and leave for the summer. Every day after work with the family go out of town for the night, and weekend for two days.

This house on wheels is a combo that is designed for towing a car “Moskvich” trailer. When folded, the trailer does not restrict the driver view to the rear, and the low height makes it stable and practically does not add drag.

In the assembled state, the trailer transformed into miniature apartment: the main common room — dining room-living room; kitchen and two bedrooms on each side. The salon has a sleeper sofa with an upholstered headboard, Poladian, coffee table, dining table, sideboard. For evening lighting there are two light on the ceiling; day — two Windows with sliding vents. The entrance to the cabin — ladder.

The bedrooms have two beds 1200 X 1900 mm, with foam mattresses. Each bedroom on the hinges has a small, Ø100 mm, the shades for individual lighting when reading; switches hanging. On the side walls in the bedroom the tent is sewn with three pockets. The walls in the salon decorated with colored plastic, the floor is covered with colored PVC tile size 50×50 mm. 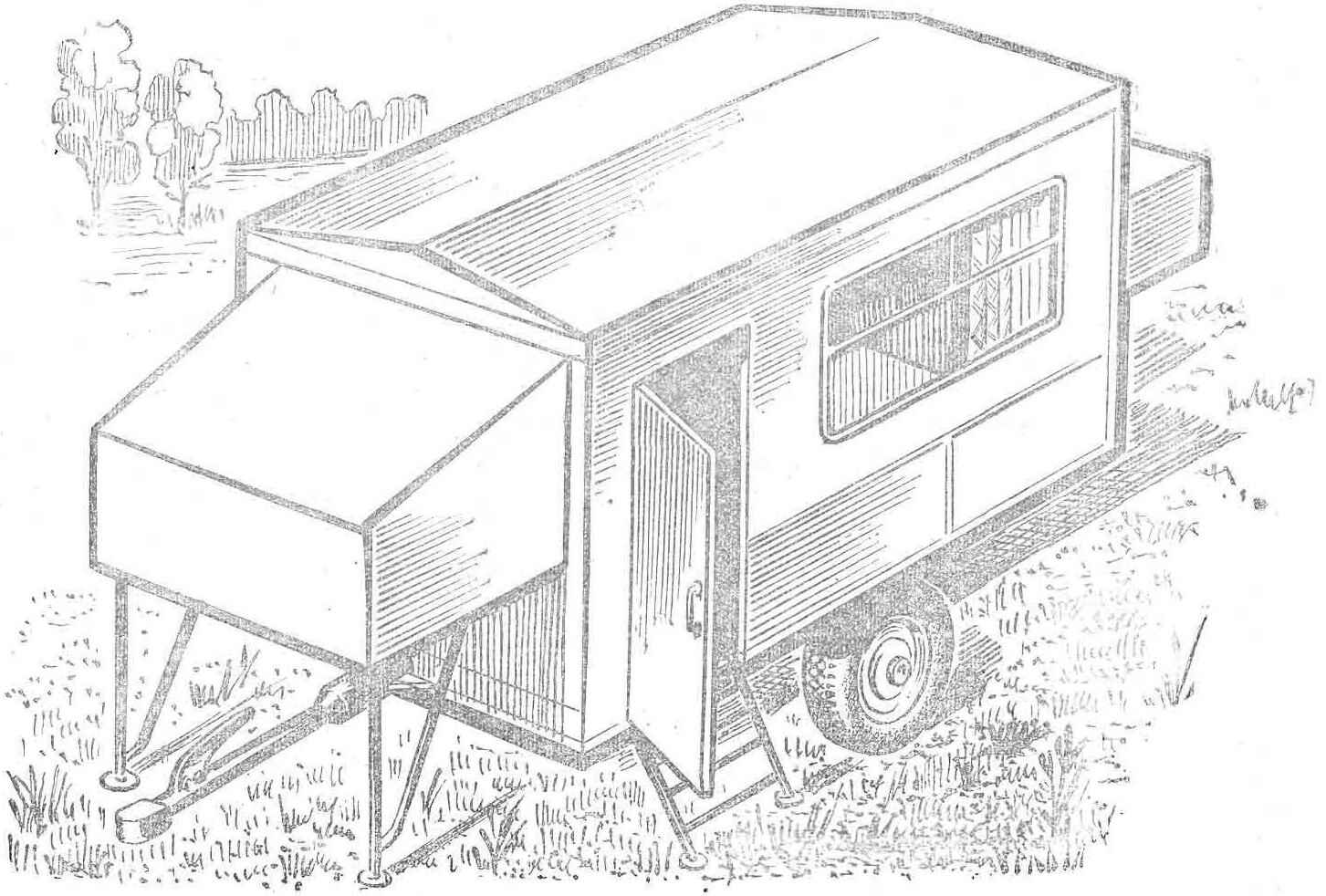 Sofa and Poladian mounted above the wheel arches and made the type of train. Cover mounted on hinges, serve as their basis. The box, located under the lid of the sofa can be used for storing food, crockery, bedding, batteries.

Both side walls of the cottages during disassembly are added. While disassembled the door: it consists of two halves connected by a hinge. Grounds bedrooms — shields, consisting of two cloths each, also sorted out and stacked on the floor, along with canvas awnings.

The basis of the trailer chassis. The main element is metal frame, the load in the design of the trailer. This unique frame is attached on top of the residential superstructure, and bottom — suspension and chassis.

Through the frame center (Fig. 1) is thin-wall pipe Ø100 mm, turning to the drawbar with a coupling at the end. To the pipe in the middle of two large welded crossmember. They also welding, with the inner sides reinforced overlay amplifiers with holes for the bolts securing the suspension arms. Two plates with holes welded to the tube closer to the middle. Two small cross-beams connecting parts of the waist frame of the base with the Central tube, while simultaneously reinforcing them. The wheel housing is formed on both sides of the trapezoidal welded frame, which further increases the rigidity of the structure. Their sizes allow the use of wheels of all models of “Moskvich”. 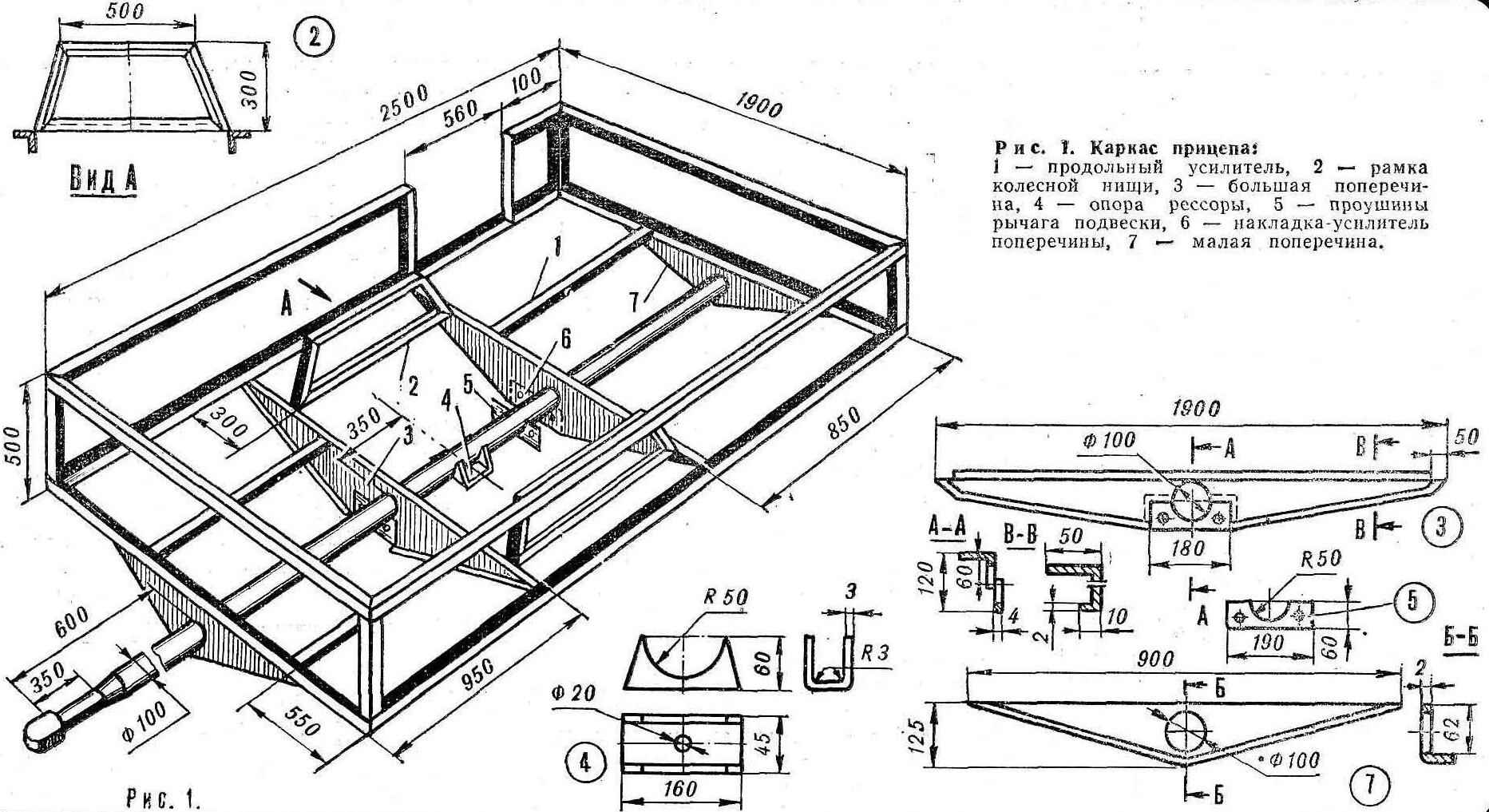 1 is a longitudinal amplifier

5 — eye of the suspension arm,

To the middle part of the pipe is welded curly bracket — a support for a transversely mounted leaf springs.

The base frame of the trailer is welded by standard steel angle 40 X 40 mm. the Position of the axis of the wheels is selected so that in static condition at the site of coupling, the drawbar exerts a vertical pressure on the towing device of the towing vehicle does not exceed 25 — 40 kg. 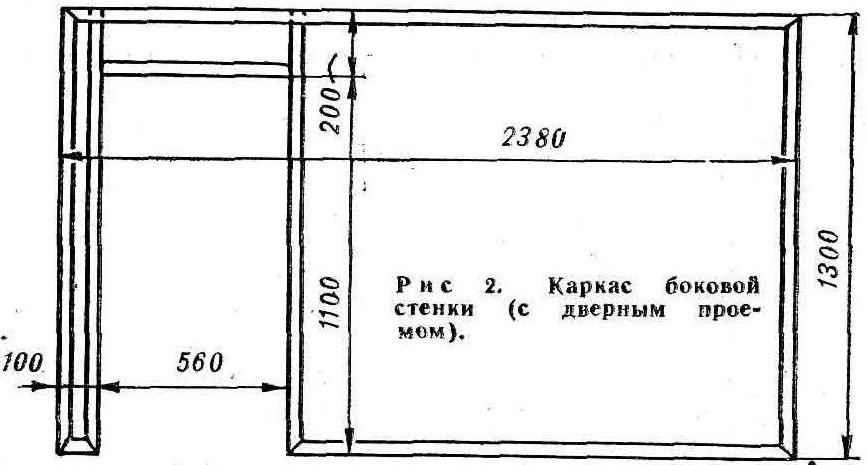 The side walls (Fig. 2) add-ons made solid — frame from pine strips, the surfaces of plywood, the inside is covered with plastic. Frame of angle 30 X 30 mm.

Upright side walls are fixed uprights — long, height of walls, thin-walled tubes, for which at the four corners of the frame drilled holes. The walls to the racks-the pipes are bolted.

Two fold-out sleeping compartments are the Foundation metal frame, made of pipes and consisting of two halves each. Frame rests on two V-shaped tubular stand with supports and the other side on the transverse part of the upper trim frame the base of the trailer; locking — pins.

Arc both awnings, pivotally fastened on the grounds of bent thin-walled tubes; when disassembling they fit together with the frames of the bedrooms.

To attach the tarpaulins to the roof, side walls and bases of beds at the edges 100 mm riveted metal hinges and rigid elements secured M4 screws, caps are put on with the layout of the loop.

For a better seal when attaching awnings to the roof I the side walls of the tarpaulin pressed against the straps and bolts.

Since the design of the chassis put the Central tubular beam with cross members, it appeared rational to apply the suspension on a V-shaped levers. Independent suspension of the trailer is made on a transverse semi-elliptic leaf springs (Fig. 3) fixed the middle part on a beam and bearing only vertical loads.

The longitudinal force from its fully unloaded are arranged in pairs in the form of the letter V four tubular control arm. They end bushings with rubber bushings through which the bolts are mounted between the crossmember and the plate on both sides of the Central tube. With part of it enclosed between the attachment points, they form two rigid triangle, the vertex of which is located the axis of the wheel (axle) and the end springs. Longitudinal forces acting on the wheel and the ends of the springs lie in the plane of these triangles, where their stiffness is the highest. For damping the transverse oscillation on the sides against the wheel installed the springs. Another feature of the suspension — hinged leverage on the bushings with rubber liners that operate without lubrication and require no maintenance, do not turn in the ears nor the arms, nor on the tightening bolt. The levers are rotated due to the twisting of the bushings. 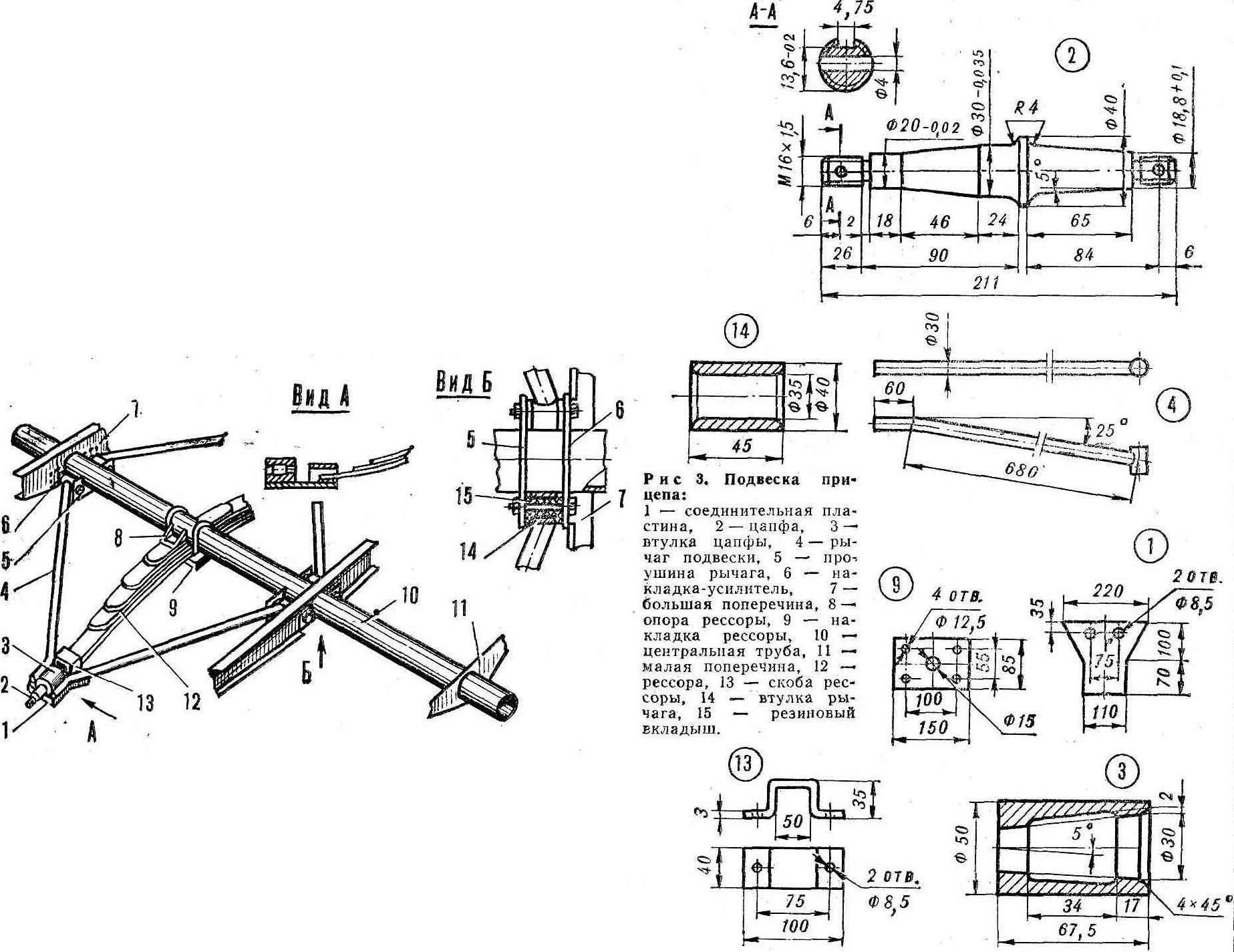 Spring applied from the car “Volga”, but before installing it was prepared in the following manner: clipped ears of the indigenous leaf, a little drawn the remaining ends and somewhat bent, as shown in figure 3, view A. these tips are based steel glides welded to the connecting plate 1. Clip spring restricts withdrawal it from the bearing when the wheel comes off from the road.

The wheel is mounted on the axle of alloy steel 40X, oil-hardened low vacation.

His short cone axle enters into the sleeve 3, welded to the connecting plate together with the ends of the levers. Axle fixed nut ø 16X1,5 which zaspirtovanny.

As shown, a spring attached to the Central pipe step ladders with cover 9.

As hitch used ball Ø50 mm from the rods of heavy truck and secured to the towing device of the tractor, and at the end a trailer hitch mounted head with the notch. The coupling device allows you to freely change the angle in the horizontal plane in both sides of not less than 60°. Overcoming irregularities in the road the car’s towing bracket and trailer hitch are deflected in the vertical plane not less than 25°. 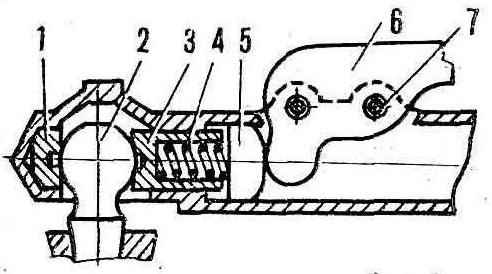 Fig. 4. Scheme of the coupling device:

Hitch design mezzasoma, the backlash does not appear when wear. When moving the locking lever 6 via the thrust spacer 5 presses the spring 4 (Fig. 4), which, in turn, between the fixed 1 and mobile 3 biscuits clamps ball pin. Check with the bolt (lock) securely locked in a fixed position. Despite the fact that uncoupling on the move excluded the design of the coupler used and belay (safety) rope, which is attached to the end of the drawbar. The end of the cable is slid over the tow device of the vehicle and connect spintwist bolt.

Wheel equipped with the brake pads from the rear wheels of the car “Moskvich”. Cables handbrake withdrawn to arm, installed on the front of the trailer and serving as the Parking brake.

The trailer lights have a “stop” signal, Parking lights, turn signal and license plate light. In addition, the back, the edges, the trailer is equipped with two triangles with red reflectors, and front, sides, and yellow reflectors installed.