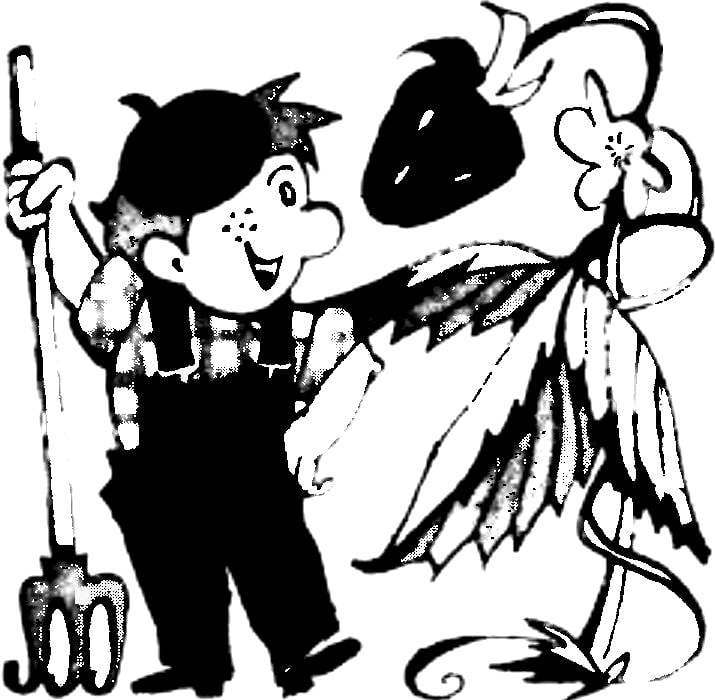 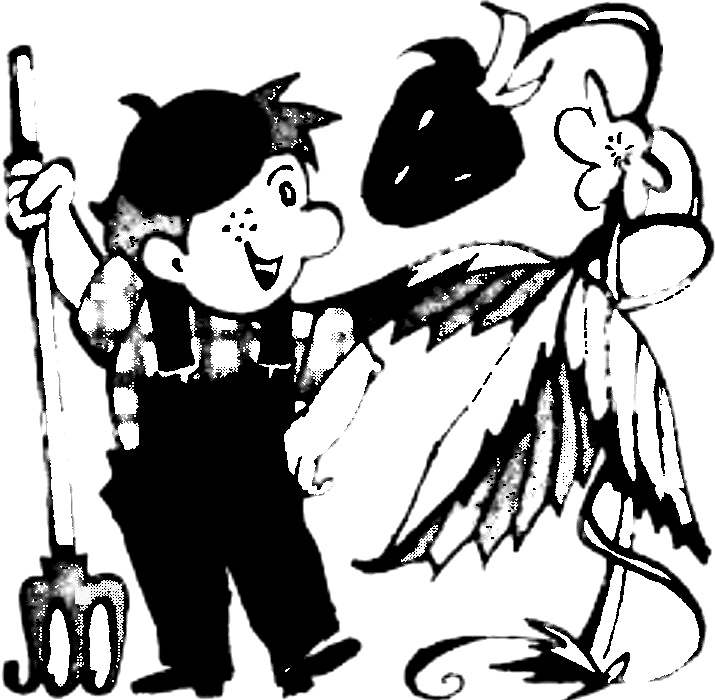 Strawberries, strawberries… They are often confused with each other, but the best berries I think rightly. Bright, juicy, fragrant. Cream and sugar is a great dessert. Excellent and jam, and jelly, and medicinal fees-teas. Especially strawberry. It is characterized by spherical-conical shape, whitish color more than half the berries, extremely strong pleasant smell. From large-fruited strawberry called in common parlance also strawberries, these properties are expressed slightly weaker. But for yield and drought resistance of the opponent is superior, because it is cultivated very widely.

And, of course, at least one another though “sweet berry” compassionate care requires. The necessary equipment and the corresponding (strawberry) tool. For example, such as in published collection, made up of letters from our readers.
The second life of the saws, shovels and a broken fork
Comes with time in the disrepair of a worn tool. But in the capable hands of zealous owner can gain a second life and a broken fork, and a crooked spade, and corroded by the rust of the arms saw. The truth of this I was once again convinced, having been in the country a neighbor is an avid gardeners, and read about its inventory.
For example, the tool for processing the rows. Your one-stop, say the thing! Evaluated, comparing it with the primitive plucking growing like a weed weeds. But done is such a practical cultivator of… broken fork, the remaining extreme Rog which neighbor put (followed by fixing with screws with countersunk head) work items heart-shaped, made of a piece of cloth of a saw. According to master, you can also use the two old welded accordingly berestovichany (GOST 23707-79). The front edge of the work items have sharpening, the width of which varies from zero (at the rear “wings”) to 14 mm (arrow-shaped front section with the divorce cutting edges 125°). Heat treatment — 40…47 HRCuh.

Fig. 1. Cultivator for processing the rows:
1 — shaft, 2 — enclosure (used the mounting tube with the two remaining extreme horns of the broken fork), 3 — cutting elements (of cloth dilapidated saws), 4 — treated plants.
Again, the VCSEL chip (but with preserved Central horn, reinforced stiffener) neighbor-craftsman adapted for processing bushes strawberry, as well as weeding, cultivation, thinning onions and other vegetable crops. He was able, having welded on upon folded at an angle 110° half horn special blade. The latter has a sharp front and a blunt rear edge, and sharpened on the type of knife the edge. The beginning of the horns inclined to the longitudinal axis of the handle (mounting tube) at an angle of 25°.
Work with a cultivator-coarasa in the following way. Put the tool tip down. Then, turning the handle somewhat to the right, move the cultivator-Casares without bending, sharp edge forward and myself. Cut the furrow (by removing the “chips” from the ground), tighten the tool to dull the edge, then done operation is repeated. Changing the angles (the position of the blade relative to the workpiece), to determine the optimal slope, width and depth of loosening. When weeding the narrow aisles of the tool oriented so that the obtuse angle was kept in the treated soil at the bottom. Then the blade is touching the blunt edge of the plants, is to gently pull them apart without damage.

Fig. 2. Ripper-Casares:
1 — shaft, 2 — mounting the pipe from a broken fork with preserved Central horn, 3 — blade with sharp leading and blunt trailing edges and tip.
As for trimming the mustache, unnecessary sockets on the plot with strawberries (strawberries), so here it is, as they say, easy. The sides of the range this work is done, with the blade of the tool horizontally. Well, in a number of pruning are turned down with an obtuse angle. The end of the tip is raised, the direction of movement of the tool.
But it is better, as shown by practice, to perform such a specific operation, use the notched cutter in the form of hooves. This tool is made of old shovels. The painting “sold” on the fire, trimmed appropriately and minimized to polovinku. To the resulting housing is welded to the bracket delimiter. The cutting edge is sharpened and subjected to a heat treatment HRC 37…53e. 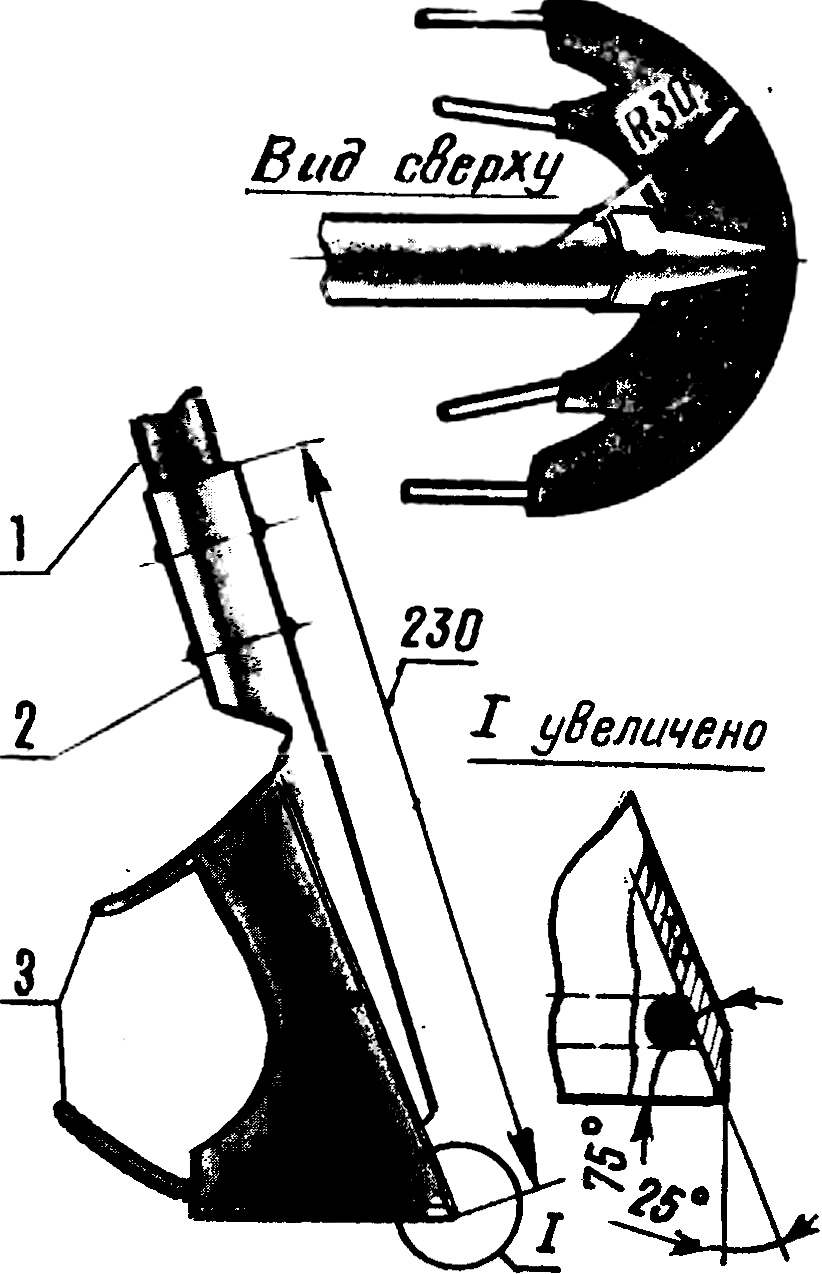 Fig. 3. Curved cutter:
1 — shaft, 2 — tulaka in polvoranca with a curved and cropped accordingly by the canvas (from the dilapidated shovel), 3 — staples-constraints.
While working on the portion shaped cutter is supplied under a Bush of wild strawberry (strawberry). The edge at this point in the ground not buried. The strands pressed to the center top clip-limiter. Followed by a sharp tap of the handle. A sharpened lower edge cuts into the soil, cutting off a mustache (stolons) half-circle. A similar operation is done with the approach from the other side. In the end, his mustache removed. The main shrub and the root system of cultivated plants remain intact.
A. TIMOSHENKO, engineer, Feodosia
Knife for… strawberries
The use of scissors and shears to remove the mustache strawberries, as the use of all kinds of hoes for loosening the soil on the plot, didn’t suit me: nerdy, Horny, Yes, in the sense of preservation of the root system of the Bush not perfect. More comfortable turned out to be a special knife with a curved tip and asymmetrical neckline on the back.
The size of the tool said the practice itself. She also suggested that the surface of the neckline it is advisable to do not razor smooth, but with microsatellite. As the sickle. This prevents the “blank” — slipping a mustache and stems with a knife without cutting.

Fig. 4. Knife for processing bushes strawberry:
1 — curved tip with a recess having sickle sharpening, 2 — ebony overlays on the grip, 3 — rivet Ø 4 mm countersunk heads.
The blade of the tool is made of chip saw-hacksaw. Handle with ebony plates; sharp edges are rounded. Well, the specific use of such a knife on the strawberry plot difficulties special for anybody, I think, will not be.
I. KRONBICHLER, locksmith, Kemerovo