Want to offer readers to build an electric scooter. However, this is only an idea, without detailed development. This electrosolar can be made at home, using the components of industrial scooters. Bearing parts can be made of pipe of suitable diameter.
The power scheme is clear from figures 1 and 2. Leading asterisks two; they are located on both sides of the rear axle. Asterisks associated chain transmission with two gears driven in rotation by two electrical motors. By the second increases the capacity of electroboiler, but it’s pretty difficult to find two need the same reducer and the motor, so the gears better than the fellow himself.
The wheel speed on the go should be about 800 rpm at idle — 1000 — 1100 rpm, which corresponds to a speed of 45 — 50 km/h. the most Advantageous transmission ratio, the gearbox-engine — 1:2, and the wheel-reducer — 1:1,5. This is achieved by slowing the rotation 3 times. The engine power of approximately 250-350 watts.
Now about their food. Energy source are batteries, preferably alkaline, voltage which is 9÷12 V with the capacity of 45-60 A-hours 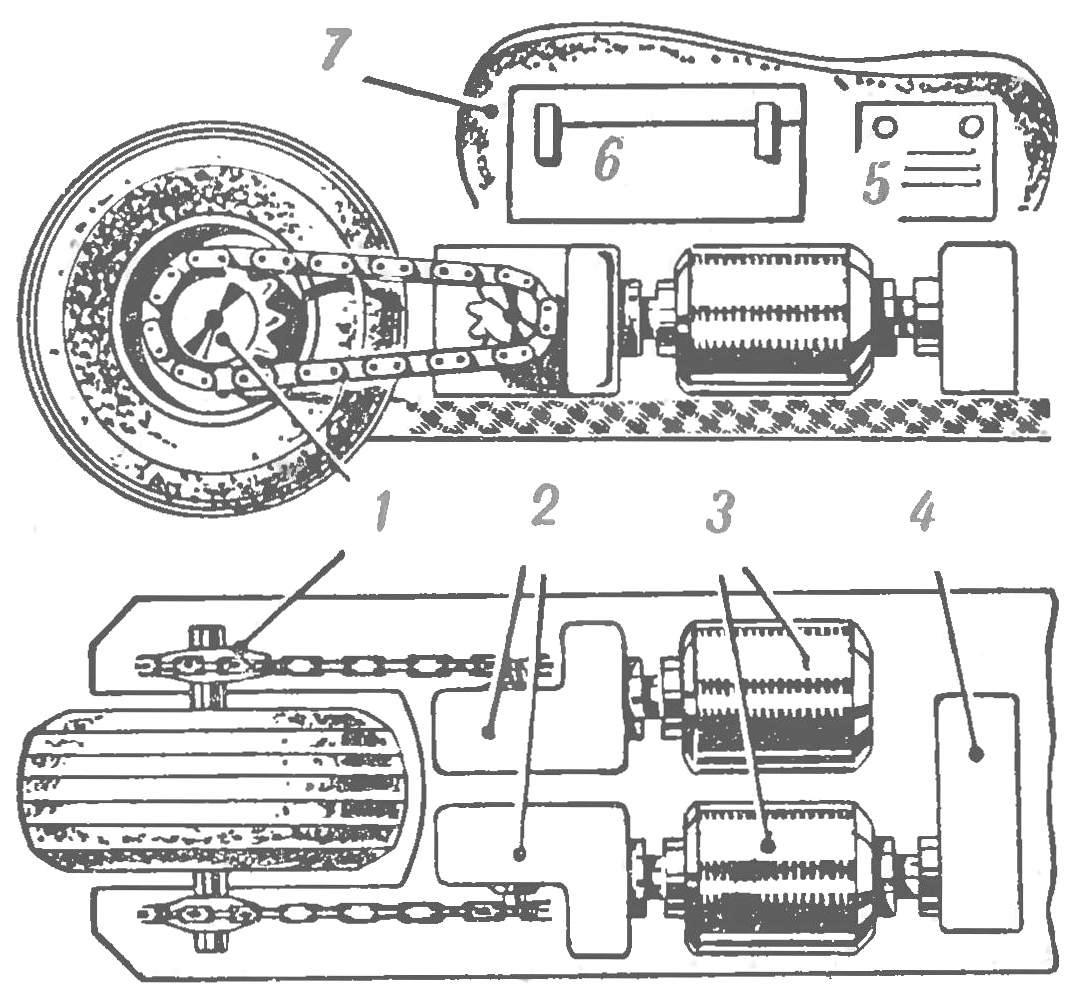 Fig. 1. The power unit electroboiler:
1 — sprocket, 2 — gears, 3 — motor, 4 — generator, 5 to 6 batteries with a rectifier, 7 — seat.
The rotational speed of the motors is adjusted by changing the output voltage of the battery.
One of the motors rotates the generator and its connected battery paper capacitors = 2000÷3000 µf, pulse discharge which is directed to charging the battery while driving.
The energy flow diagram somewhat similar to “perpetual motion”, but it is certainly not the case.

Fig. 2. Energy flowchart:
1 — alkaline batteries, 2 — generator, 3 to 4 motors, 5 — remote control.
During the stay of electroboiler batteries are recharged through a conventional rectifier with an output voltage 9÷12 V and a current of 3 A, powered from a 220 V.
I think that many readers will be interested in electrorolling. This option, of course, needs all kinds of improvements and fixes, but the idea is always only an idea.
E. KRUGLOV.