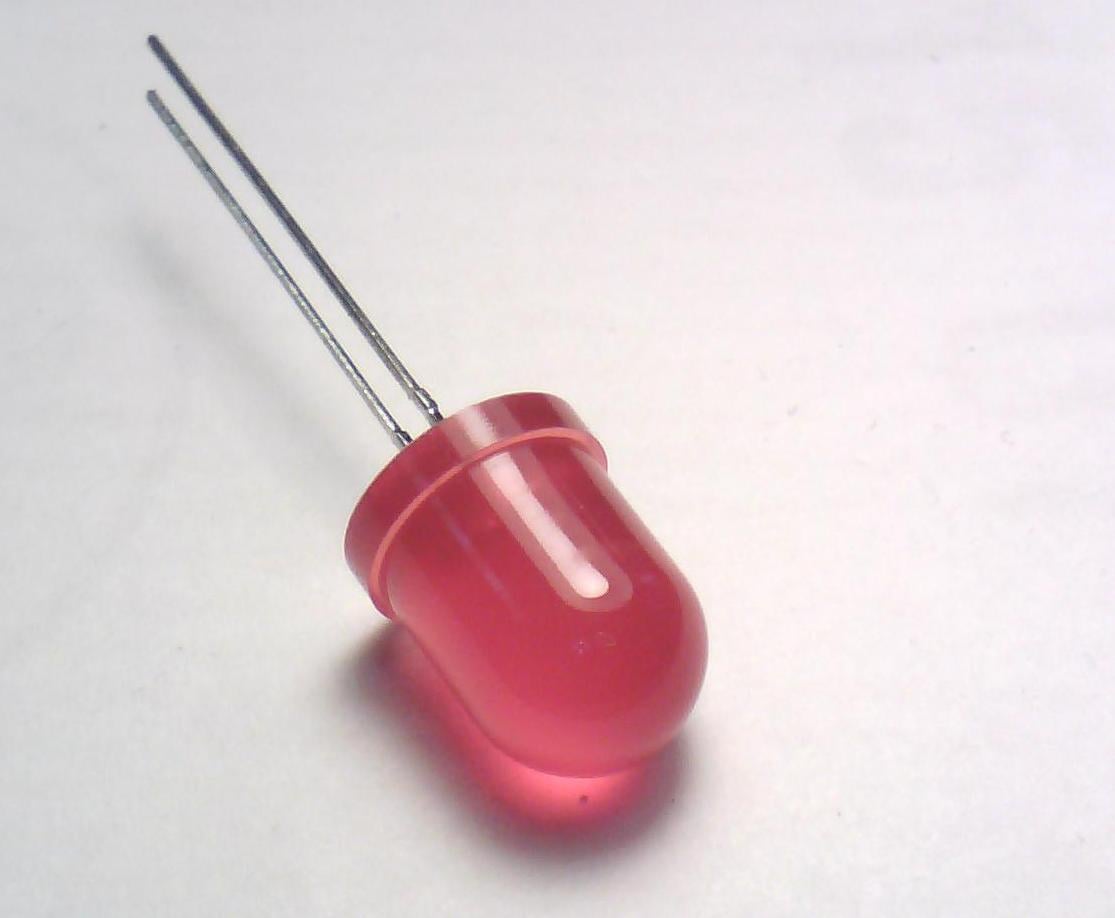 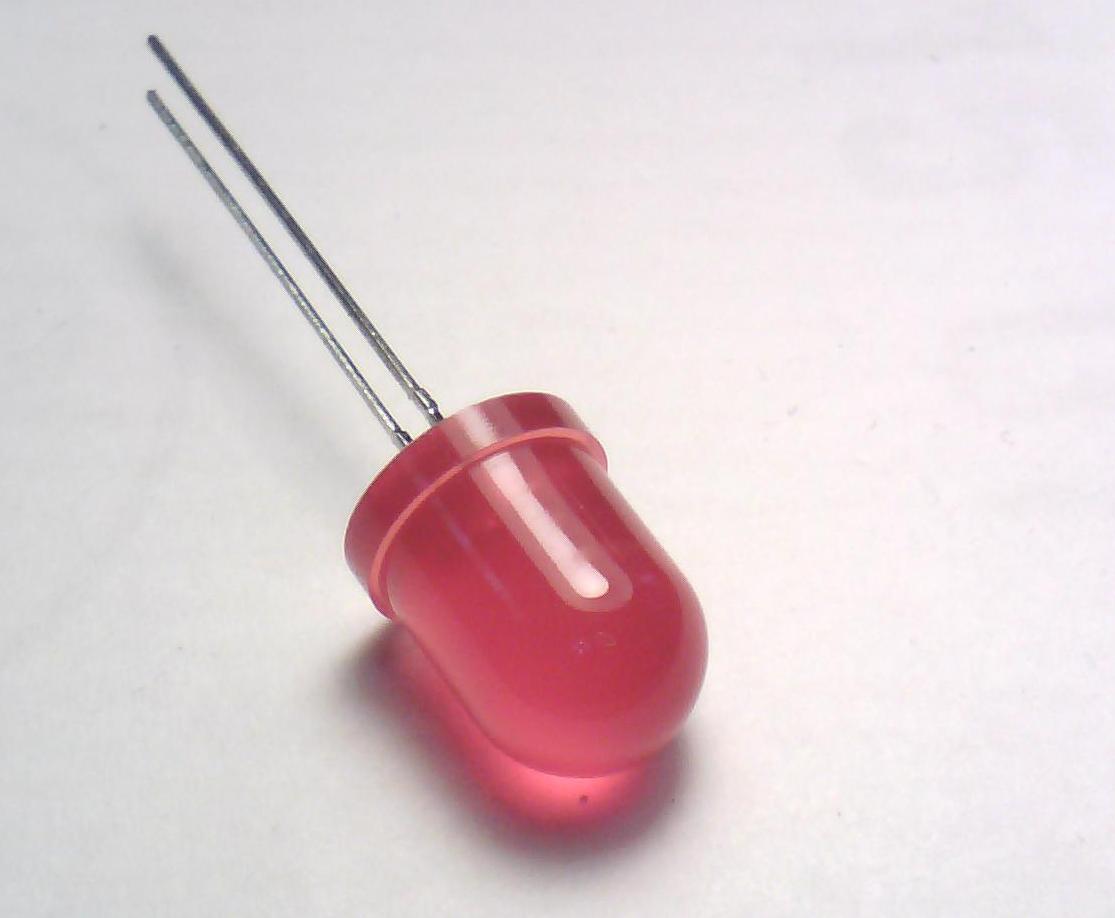 In 1907, English engineer Round, who worked at the world famous Marconi laboratory, accidentally noticed that running the detector around a point of contact there is a glow. Also seriously interested in this physical phenomenon and tried to find the practical application of “inconceivably talented Russian” — Oleg Vladimirovich Losev.
Found in 1922 during their nightly radioact glow of the crystal detector, this then 18-year-old, ham radio was not limited to the statement “strange” fact, and immediately moved to the original experiments. In an effort to obtain a stable generation of the crystal, it passes through a point contact diode detector current from the batteries. That is dealt with nothing else, like a prototype semiconductor device, later called led. The whole world started talking about “Losev effect” on the practical application which the inventor had to (before his death in the war in 1942), four (!) patent.
Since 1951, the center for the development of “semiconductor lamps”, operating on the basis of “Losev effect” has moved to America, where it was headed by K. Lehovec (USA). In the study of problems associated with LEDs, and took an active part and “father of transistors” physicist W. Shockley.
It soon became clear that germanium (Ge) and silicon (Si), on the basis of which to make a semiconductor triode, hopeless for the LEDs because of too much “work output” and, accordingly, weak emission of photons on p-n junction (more about this in the journal “modelist-Konstruktor” No. 5 and 6 for 1996). The success accompanied the single crystals of complex composite semiconductors — compounds of gallium (Ga), Arsenicum (arsenic — As), phosphorus (P), indium (In), aluminum (Al), other elements of the periodic system. As a result, in the late 60-ies LEDs, becoming quite technologically advanced devices with stable parameters, began to increasingly enter our daily life. 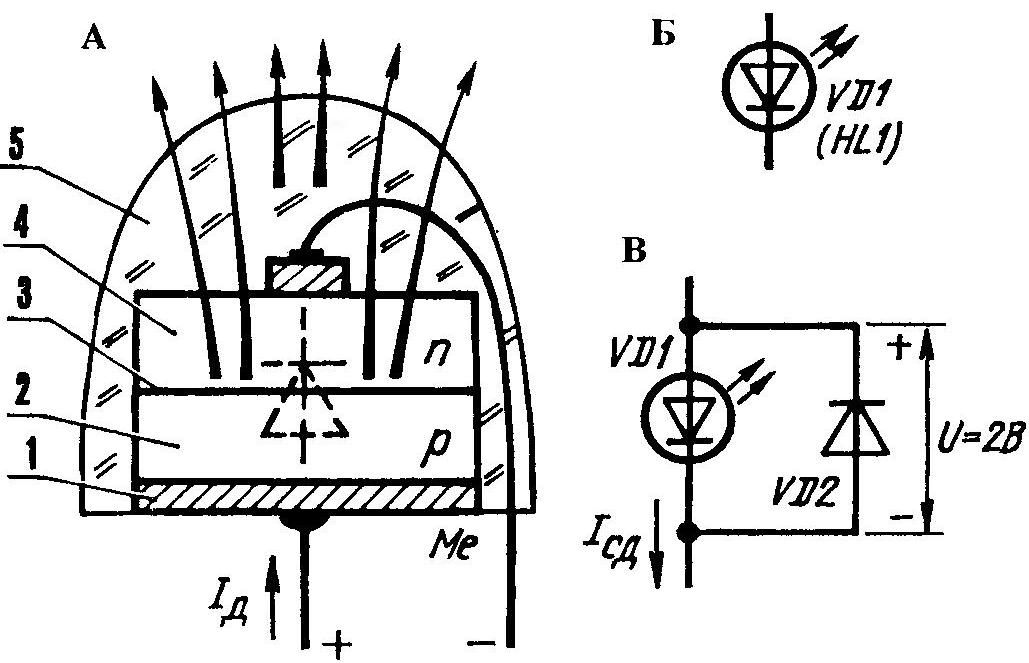 Standard LEDs (A) conventional image (B) and surge protection parallel connection of a semiconductor diode in the “reverse” direction (In):
1 — ohmic contact (2); 2 — p-the area of the active element (chip) of semiconductor material; 3 — p-n junction; 4 — n-region of chip; 5 — lens 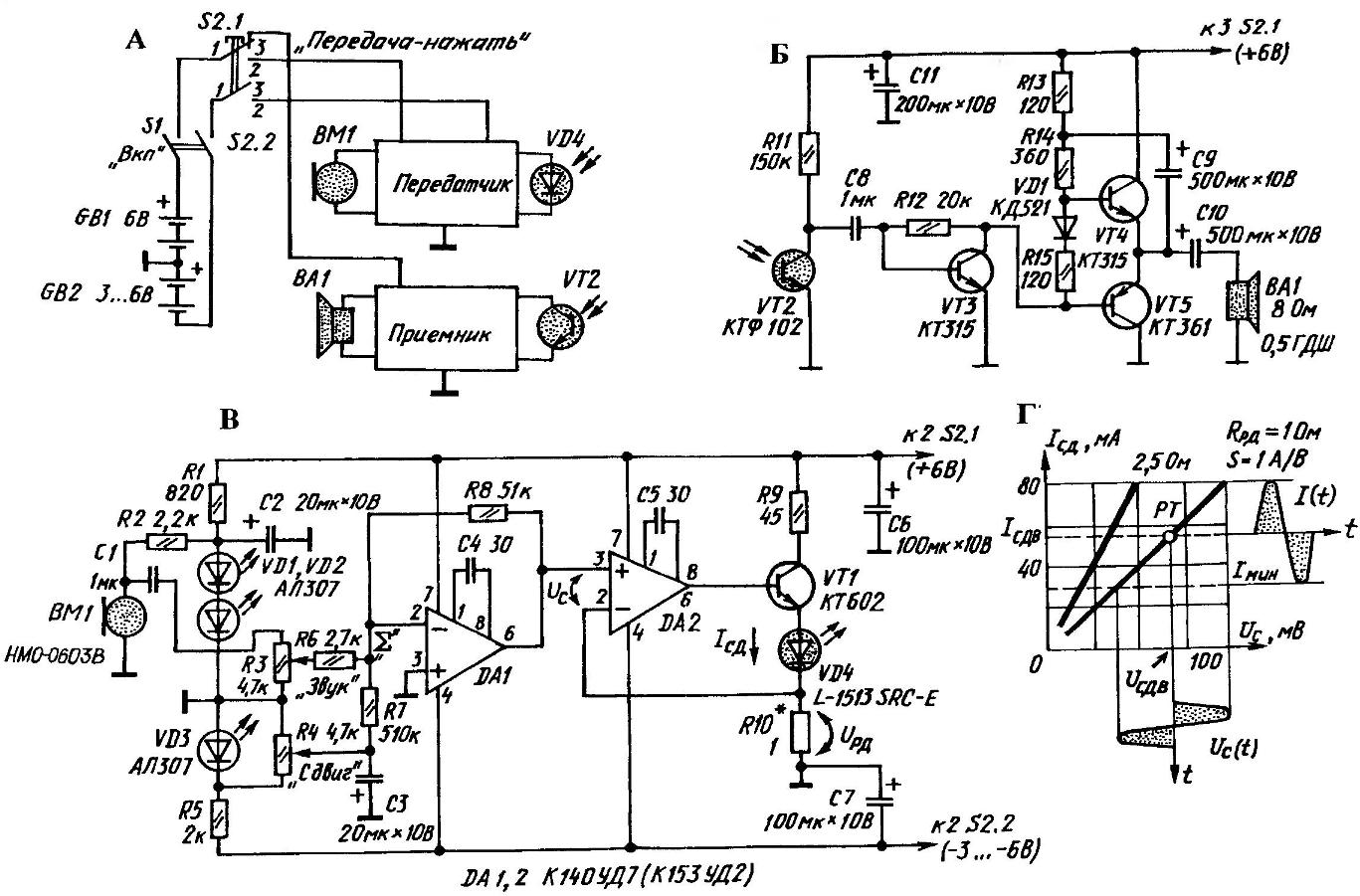 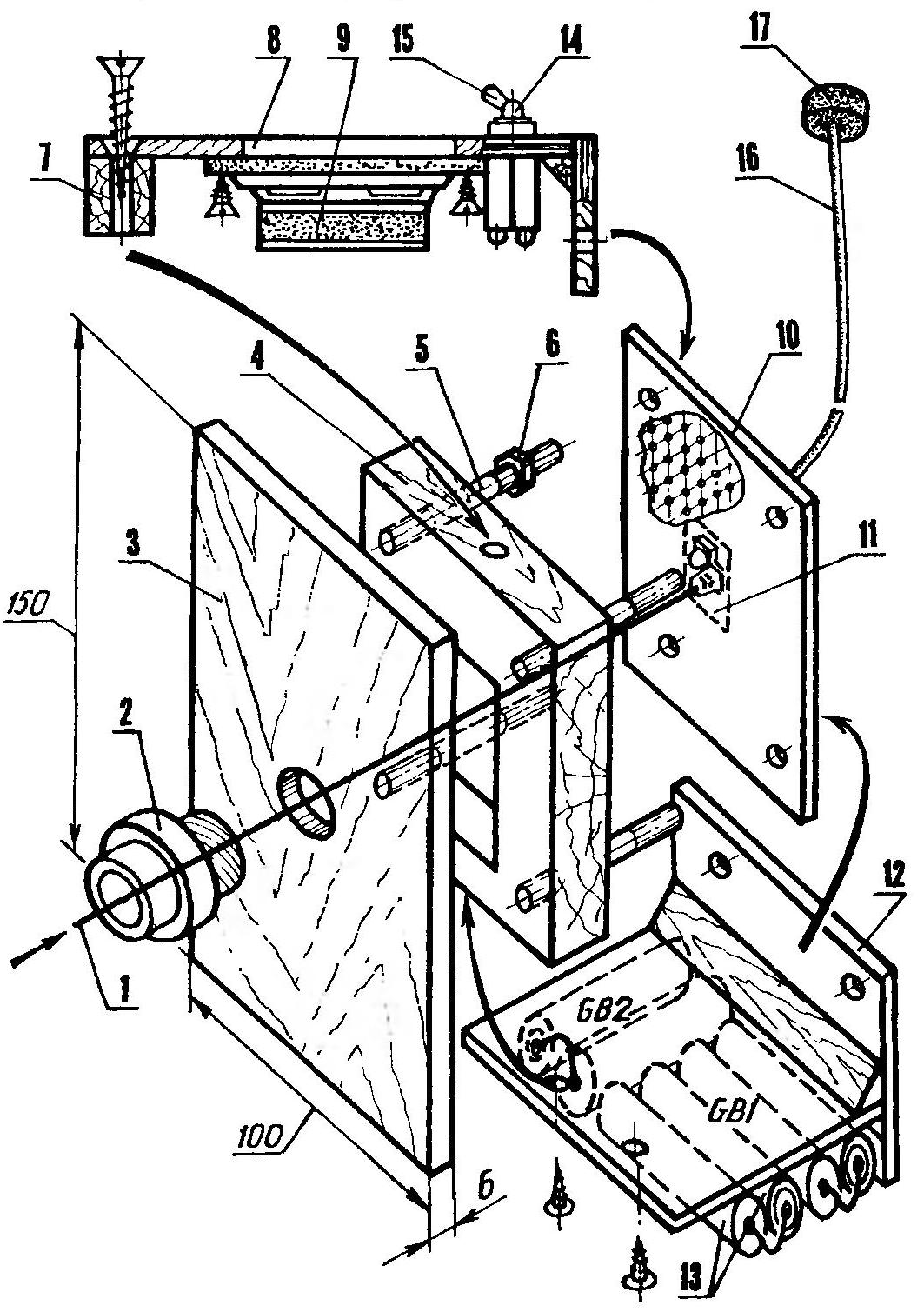 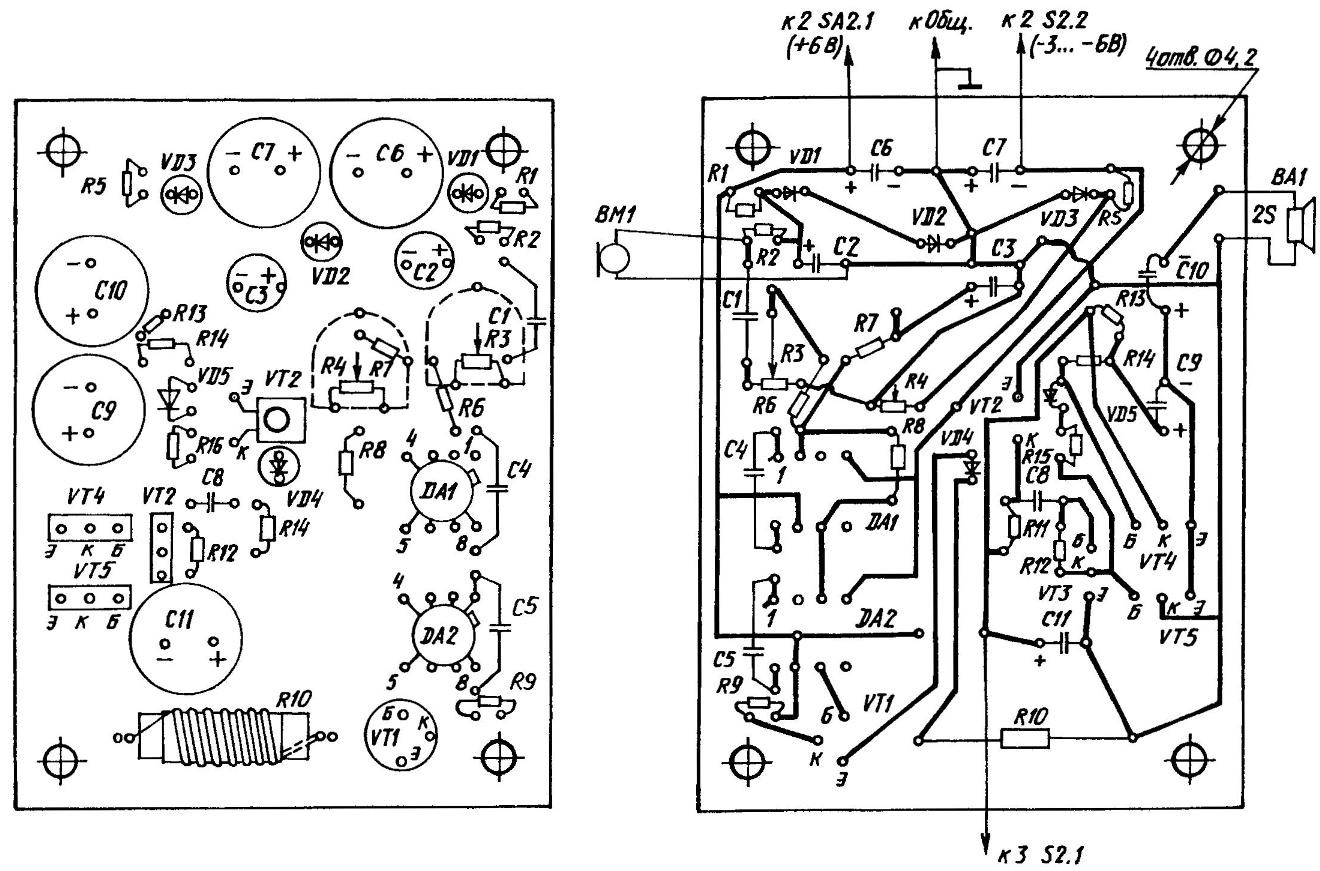 Circuit Board from the electronic components and soldering
Making OMB, the light emitter and the photodetector should be placed in the center of the circuit Board. But so that their crystals being in the focal plane of the lens was located as close as possible to the optical axis (that is, occupied the center of the frame). And to tie the whole structure and positioning of “tele” position of the Board is necessary to provide to OMB by four studs M4 with the adjustment nuts. The very same focusing optics recommended tightly, just like a screw, to screw in a neat (performed under the thread diameter on the lens) hole on the front wooden panel.
An important detail of OMB — supporting frame. It should be cut from oak or beech piece and attach with glue “88” to the rear side of the front panel. Under studs M4 (the length of each of them should double the focal length of the lens) to make the appropriate threaded holes M4. Screw on glue “88” in a frame all uprights, to put the circuit Board and fix the inner and outer nuts. Then go to the top node overhead panel with a speaker, a power switch S1 “On” S2 button and the “Transfer press”.
Power supply sources are arranged in a plywood “basement” mount which is similar to fastening the top surface of the node. Galvanic cells connected in the battery soldered (like is done in development, published in the journal “modelist-Konstruktor” No. 10 of 1998).
Given that the “zero setepolotna” battery consumption is faster than “minus Travolta” — it’s the nature of homemade sweetelena, it is recommended that (especially in energy-intensive adjustment of the device) to use a lab power supply +6 V is provided with a milliammeter on the 100 mA. And electric installation, configuration of the transmitter and receiver at the stage of debugging and experimentation is best done step-by-step on two sets: first, incomplete (one-sided), and then (for two-way communication).
In any case, it will be parallel work on two devices for which it is necessary to have a circuit Board the size 90x70x1,5 mm of non-foiled textolite or any solid sheet of electrical insulator, down to the cardboard. In two boards at once, temporarily “taking” the glue “Moment”, it is necessary to drill a grid of holes (drill with a diameter of 0.9 mm with a step of 2.5 mm). Marking with a Scriber (20 columns and, respectively, 30 rows). Drilling is better at low speed drills, undermining from time to time a diamond needle file cutting edges of microsphere. In addition, drilled four holes for the passage of the rack-pins M4.
As mentioned earlier, the light emitter and the phototransistor should be placed in the center of each of the boards, between the holes in the pin and as close as possible to each other. Further makes sense on one half of Board # 1 is to mount the radiation receiver. It should work immediately, if assembled correctly and of serviceable electronic components.
For connection to a power source speaker such a receiver will respond to a slight noise. Well, if you install a mounted charge OMB No. 1 and to direct his lens on the screen the TV works, from the same dynamics you will hear a “roar” of vertical sweep. Moreover, the presence of such a stable signal will allow, if necessary, to readjust and the ULF.
Complete electrical installation of sleeperette for “unilateral command of the” sweetelena (as the initial works on bilateral ties) is on the Board № 2. Moreover, the Assembly and testing it is recommended to parascale. Progress is fast, if no mistakes are made and used reliable parts.
Feeding the first low (3) “bipolar” power, are closely watching the testimony of laboratory milliammeter. Make sure that current consumption is “normal”. Then Usup is increased to 6 V and the resistance change of the variable resistor “Shift” after the extinction of the light emitter (engine at the top of the scheme) or, conversely, increase its brightness (engine down), preventing the current consumption exceeded 60 mA. The variable resistor “Sound” adjusts the depth of modulation, focusing on more or less the flickering beam.
After the installation of sleeperette in OMB № 2 begin experiments on one-sided “team” connection. “Aim” through two lenses to get the beam from the transmitter No. 2, the phototransistor of the receiver No. 1 is not so easy. The relationship of the experimental to the same gun! However, implementation of the settings (and during operation) must not be allowed to super-bright beam even for a moment fall into the eyes. Especially more powerful than in the development of hoteislakitira.
Having sound feedback from the device No. 1, regulate the quality of the effect-variable resistors “Shift” and “Sound” of the device No. 2. Then proceed to the installation of receiver No. 2 and the transmitter No. 1. The result is a two-way channel sweetelena of communication where the receivers are permanently enabled state. Any of the light emitters while in standby mode, is activated as needed: click the “Gear-click” on the appropriate apparatus. Simultaneously disconnected from the electrical power source located with him on a single Board receiver. Toggle “On” to turn on / off the device.
V. AWL, radio engineer