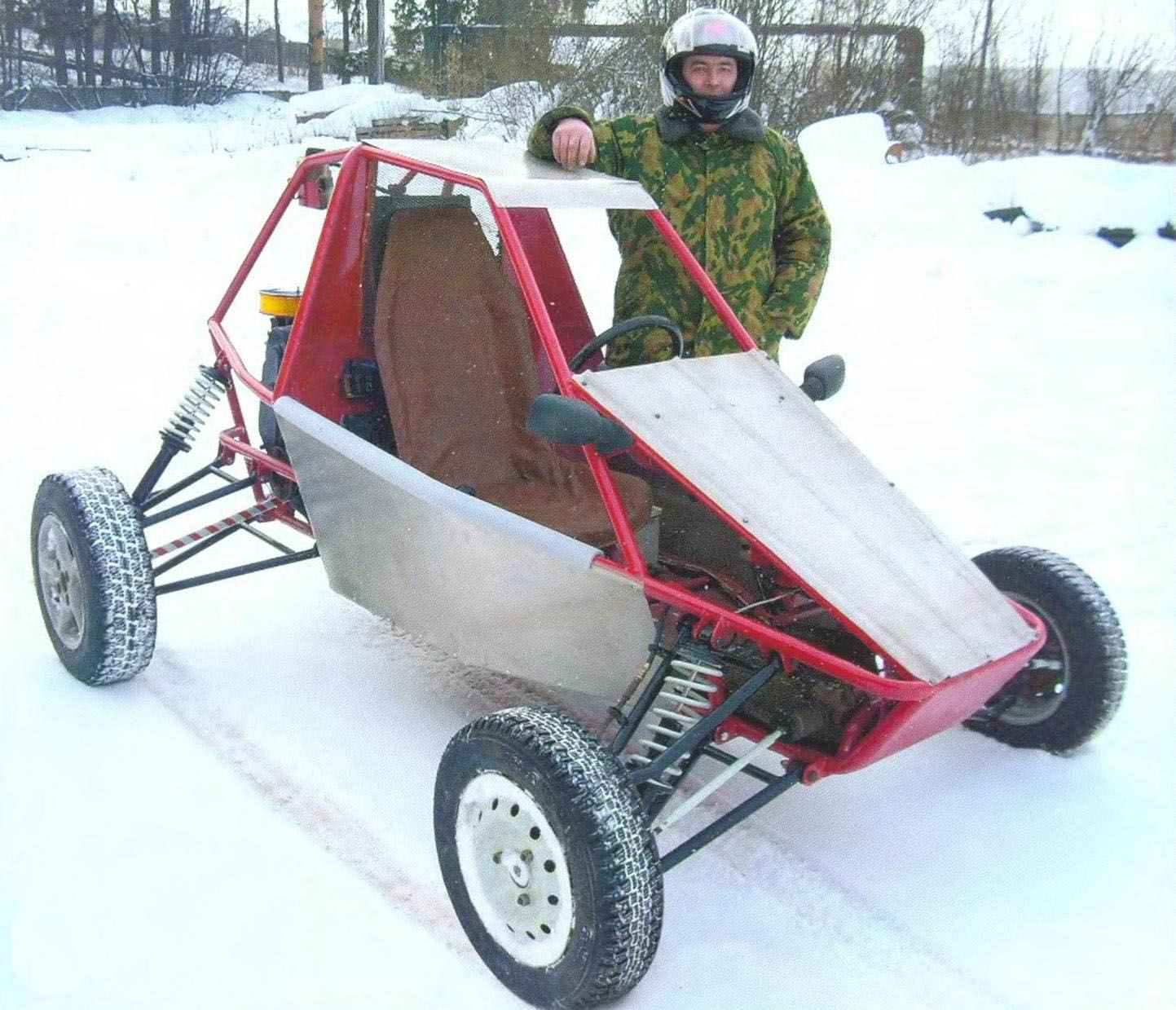 Dream-the idea of making a car, even simple, like buggy, appeared in his teenage years, when machines were in short supply. But for many UNDERSTANDABLE reasons (had neither the experience nor the tool nor the means) she could not at that time be done — and ended only with drawings on paper. Over the years the opportunity came to build, and the boyish idea has revived in my mind. On the profile of their work by this time, I’m already quite versed in the device of conventional cars, which helped me during the implementation of the project.

Our dictionaries, even technical, somehow paid attention to this type of machines is buggy. But with the current accessibility to Internet resources was not difficult to see and understand what constitutes a real cross sports or recreational vehicles called “buggy”, which translated to English means “bug” or “flea”. And in fact — this is the machine for driving off-road over rough terrain or desert the coast. 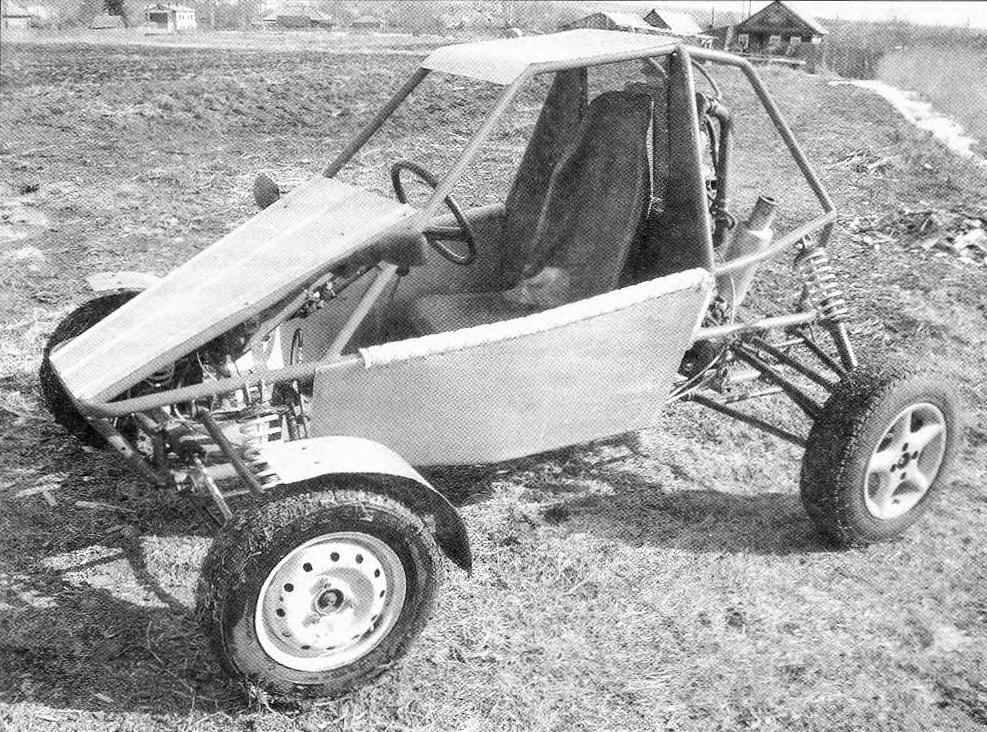 The car, which will be discussed, is the second built by me. At first I gained experience, took my lumps. The same wanted to make a more graceful, easy, a pleasure, but also with “easy drayverskoy manners.”

So first of all in the outline drew attention to the sporty design of the car, although it was known in advance that it is not built for the sport. The layout was chosen with a rear engine, like on most buggies. Well, in this regard, the back was the most units of his service. Salon (if you can call fenced with pipe frame space for the pilot) have designed for yourself — for your own growth, but rather for the length of your legs.

The second necessary condition was the making of independent-wheel long-travel soft suspension — only such could provide high-speed movement over rough terrain. But more on that later. 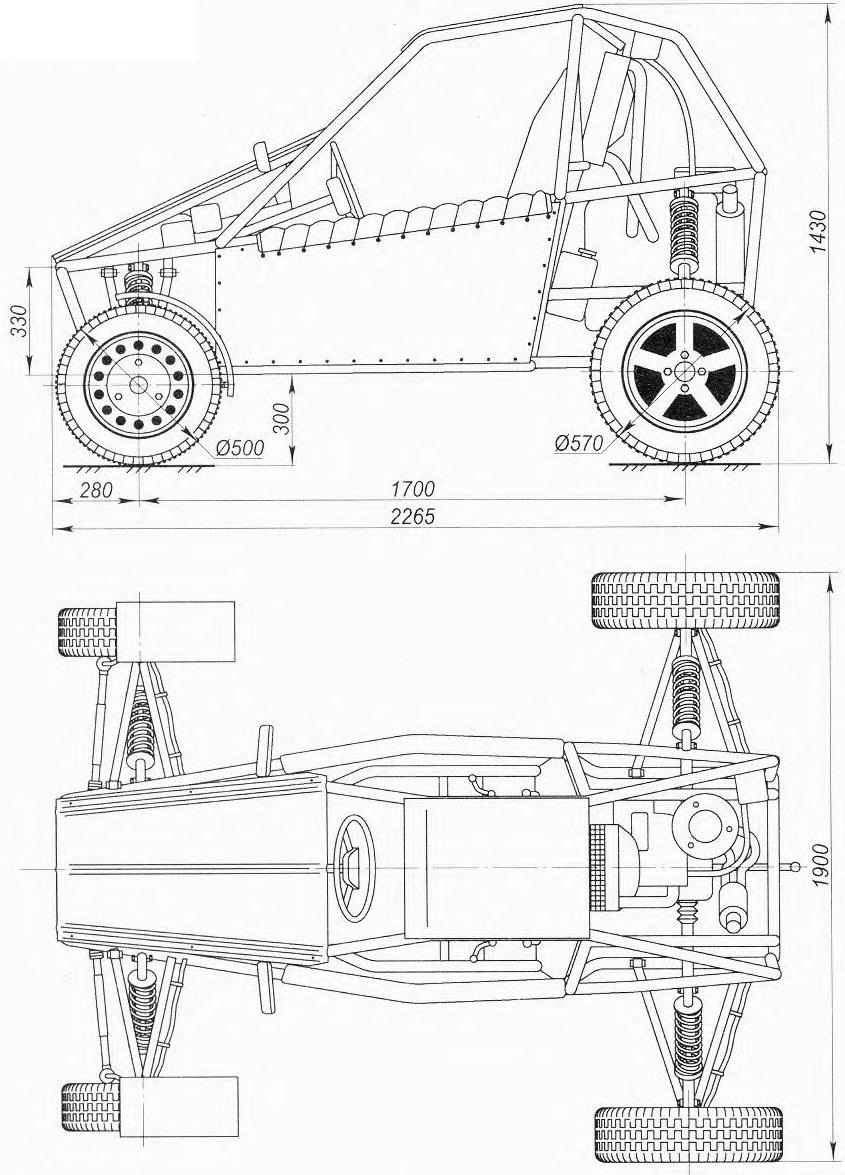 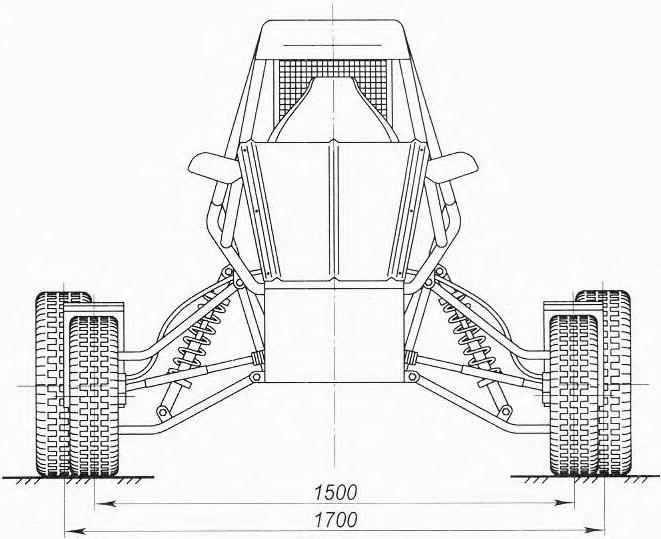 The car type is “buggy”.

The machine — welded space frame-a frame that includes force elements and the mounting and safety elements. Logic told me that the roll over bar should be located along the frame — after all, if suddenly the car will turn over, then it by inertia will continue moving forward and then cross the arc, not being reinforced struts, must it be “goes.” 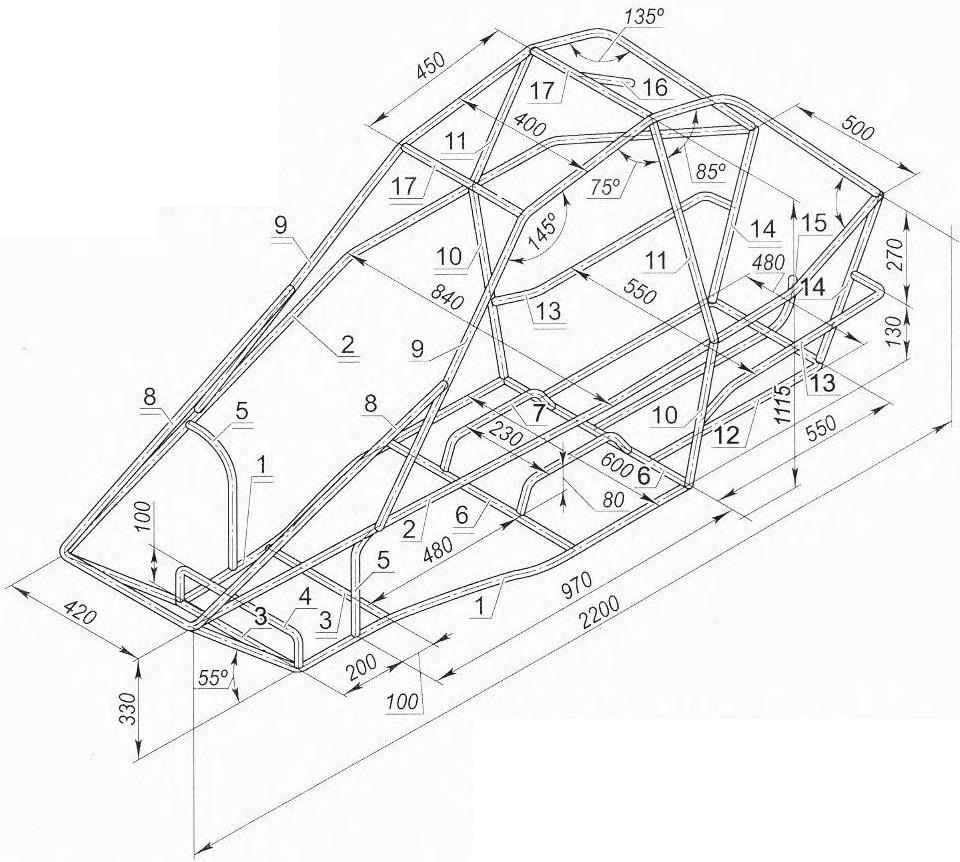 Frame (all parts except specifically stated, is made of steel tube Ø30×2,7):

Because of the limited funds allocated for the implementation of the project from the family budget, the frame was welded from ordinary water pipes with a diameter of 34 mm and a wall thickness of about 3 mm. Bends were done on the bending: radius — cold and small — with local heating with a blowtorch. 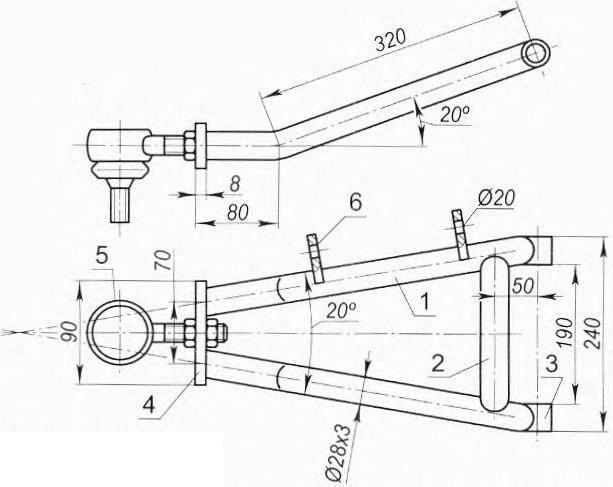 The engine capacity of 749 cm3 and 33 HP from the used car “Oka” VAZ-1113 together with the standard gearbox, clutch, transmission. Since the power unit with the gearbox moved back (and as you know, on the base car he is standing in front of), had to redo the shift linkage. But the task was not so difficult. Was a bit unsightly and with more weight, but fast and simple to manufacture. The stock gearbox docked homemade curved rod-“poker” and missed it from below between the engine and transmission forward. And then — regular wings (only unfolded backwards) and a gear shift grip, as it should be to the right of the driver’s seat. Switching circuit speeds remain standard. 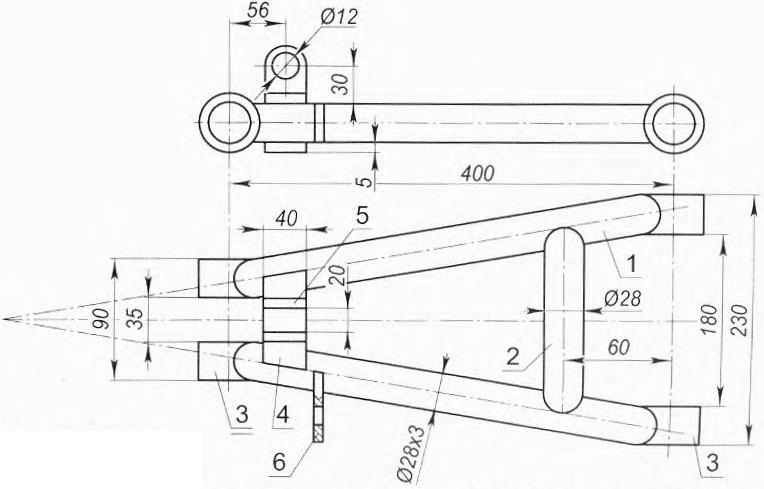 Each wheel suspension is double wishbone. The a-arm is of circular tubes 28×3 mm. On the frame levers are suspended in the eye via silent blocks on the VAZ-2101. Eyes ordered the Miller and welded them to the frame in place during the mounting of the suspension arms. The rear arms are straight, and the front curved.

Front (steering) knuckles — from “Oka”, modified by dohry-chinoy suspension. The front wheels are adjustable in camber and toe-in. Steering rack “okovsky”, is located in the front axles of the front wheels and rotated 180 degrees. Steering levers, unlike placing them on the base car, is also rotated forward, and besides, more and straightened in the heated state. All this was done to compact to establish all the mechanisms and management nodes, decreasing the size and accordingly the weight of the machine, which in turn affects the improvement of the dynamics. 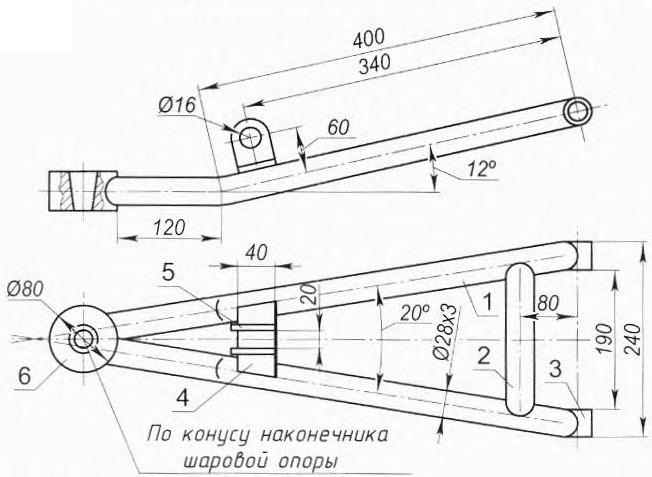 The bottom of the machine of galvanized steel sheet with a thickness of 1.2 mm. It is welded to the frame rails and the front sloping racks, moving here in the fairing. The sides, front hood and roof are made of sheet (thickness 1.2 mm) aluminum. These sheets are attached to parts of the frame-frame by self-tapping screws through pre-drilled holes (slightly smaller diameter).

The attenuators are combined in one unit with the springs on the principle of motorcycle. Themselves dampers and springs — from “Oka” and “Lada”.

Because the track of the buggy much more than the standard car, drive shafts (half shafts) are elongated. To do this, they approximately in the middle of the cut, and these ends are inserted in a thick-walled pipe with the same inner diameter as the outer from the axle shaft. After checking the alignment of parts welded together. Back fist — front, too, from the “Okie” and also under modified double-wishbone suspension. They are not turning, — that they hold the bolts connecting these blocks with the top levers. At the bottom instead of ball bearings bolted polaki with welded bushings for silent blocks. Through them, the fists are attached to the lower suspension arms. 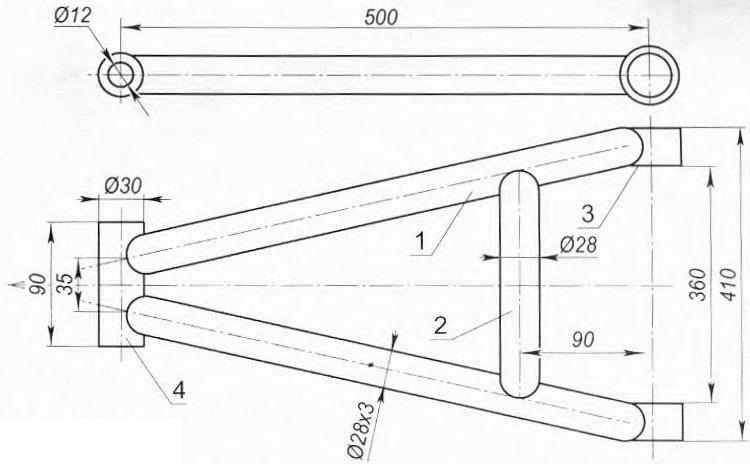 The radiator cooling fluid, again for reasons of rationality and layout for better cooling, up. The air it enters through the grille in the partition wall behind the driver between the cab and engine compartment.

The suspension of the front steering wheel:

The seat is made from sheet metal with a thickness of 1 mm, and then laminated foam and covered with leatherette (in the same way finished and armrests). Though it is not adjustable, but it turned out comfortable, anatomical. To the left of the seat is the lever gear shift and ignition.

Because the cabin is quite wide, the left of the seat mounted battery. Here were placed and the fuel tank, but later I moved it over the partition into the engine compartment that does not interfere with boarding facilities. 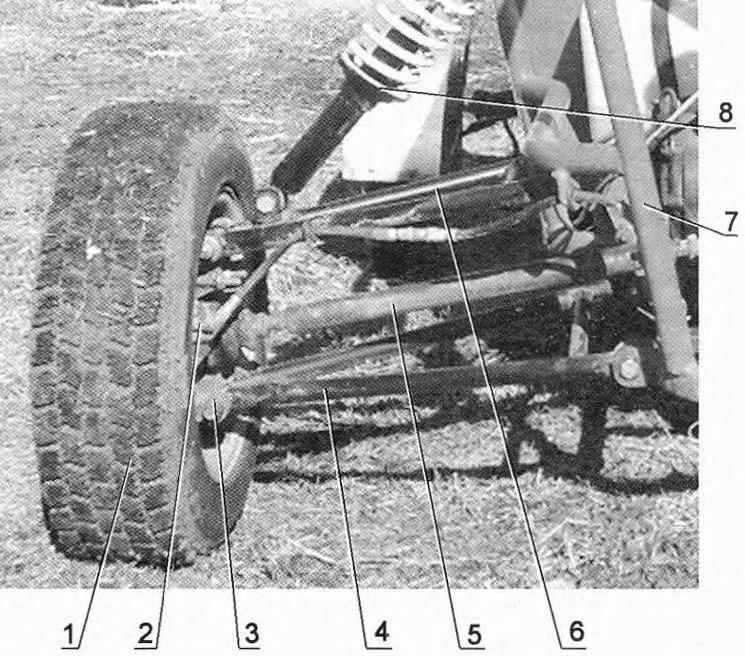 The controls (pedals, steering wheel, etc.) taken from “Oka”. The pedals are a little shortened and split among themselves. The first revision is marginally increased force applied to them, but the second has increased the convenience and speed of reaction, as the foot never falls on two pedals at once as the base car. Brakes all four wheels — disc (“Oki”), with hydraulic drive, but without a vacuum booster. Experience has shown that on a light machine it is possible to do without it.

Throttle control of the carburettor and the clutch cable runs through in budenovskoy braid. The wheels are intentionally made different (the front is smaller diameter than the rear), to underline the rapid sport style machine, which, as it tapers in the front. This had the rear wheel hubs and brake discs drilled new holes for the four studs for a “Zhiguli” of the wheels.

Revision knuckle and the steering knuckle:

Homemade silencer welded. There are rear view mirrors. Since the machine was supposed to use for daytime “rides”, the lights are not yet mounted, facilitating, and most importantly — simplifying construction. But mud flaps on the front wheels put still had, although at first did not plan to. 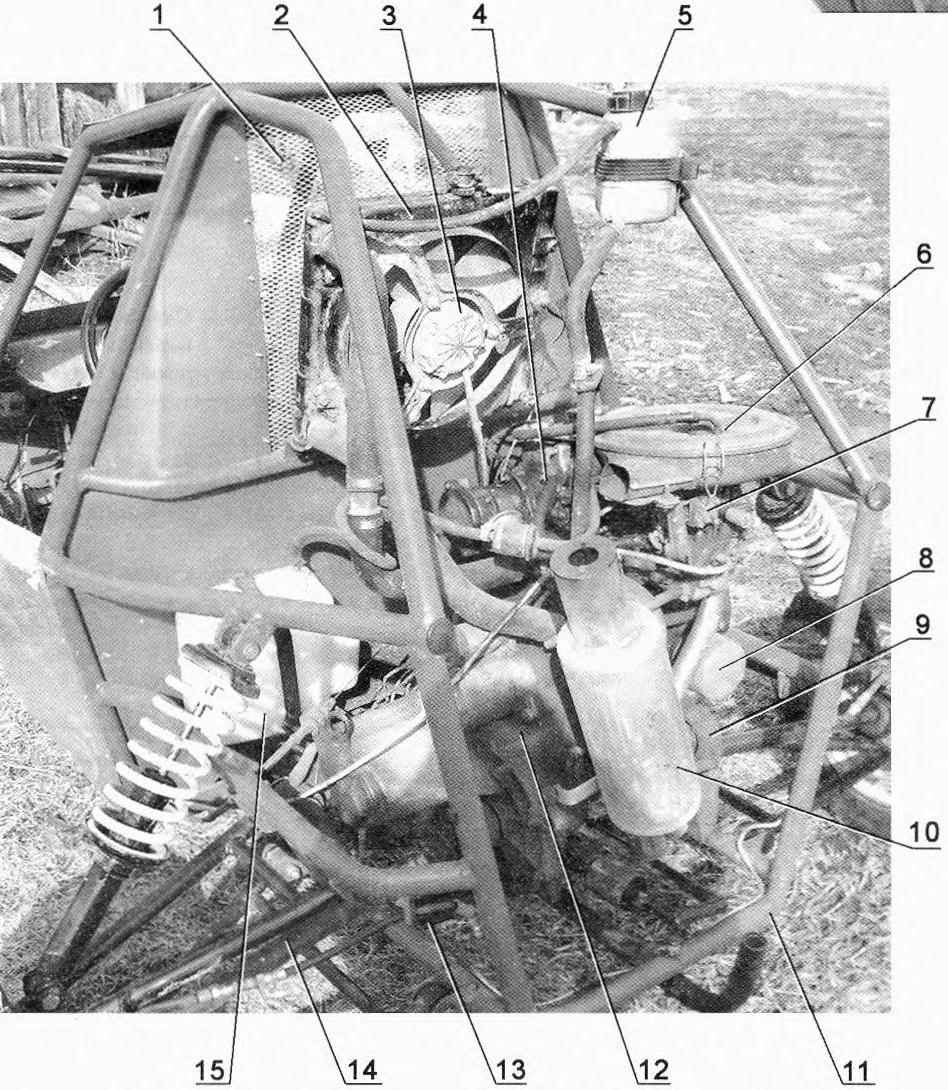 The layout of the engine compartment:

On the car ride on the weekends with the whole family, the so-called rough terrain. Especially loves to ride on her daughter. And friends with the “cool” jeeps, too, often asking for a ride. 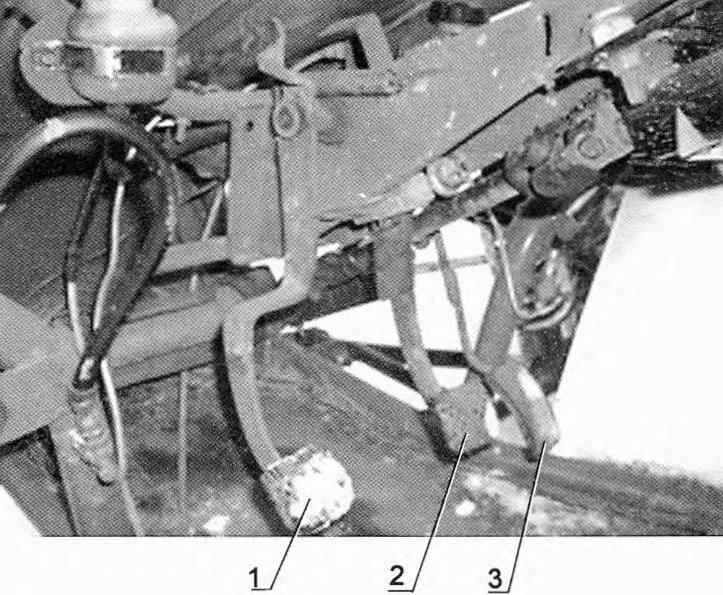 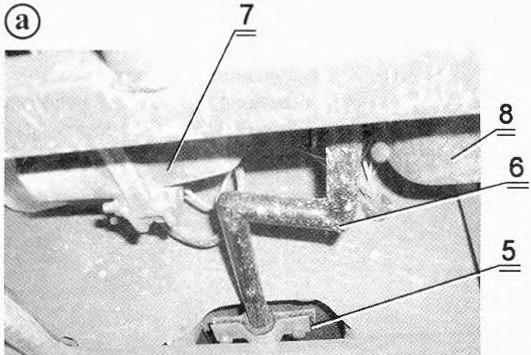 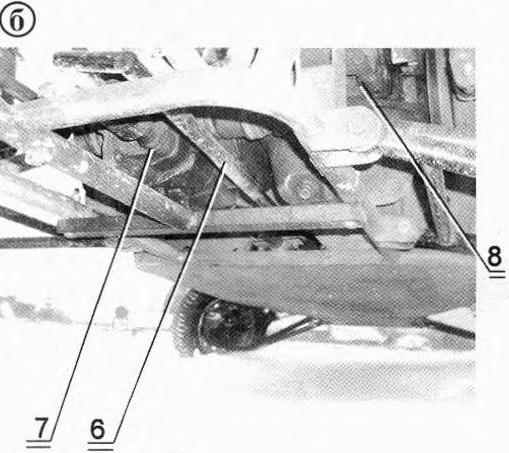 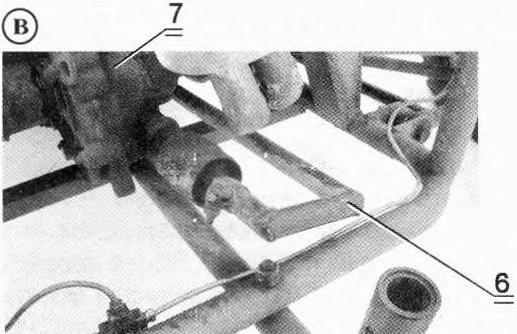 Diagram of the shift linkage and figure thrust (position in the figure in the photo is the same):

10 — the partition between the passenger compartment and engine compartment. 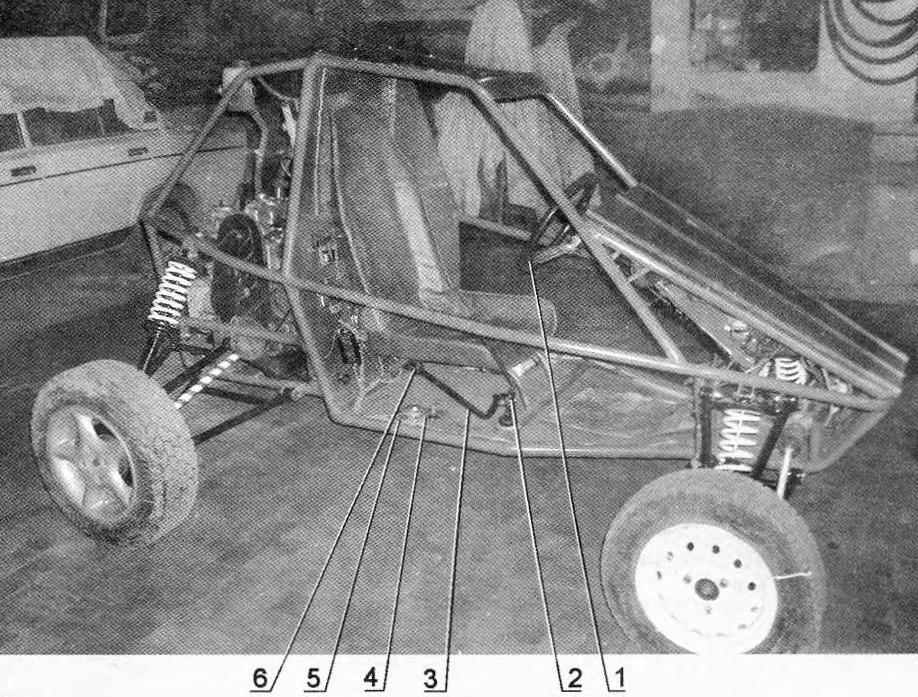 4 — switch off the battery ground;

The car is stable thanks to the wide track, runs comfortably on high speed turns and bumps due to the soft and long-travel suspension. At this ratio of mass and power of the machine is quite dynamic. Is enough to receive the portion of adrenaline.